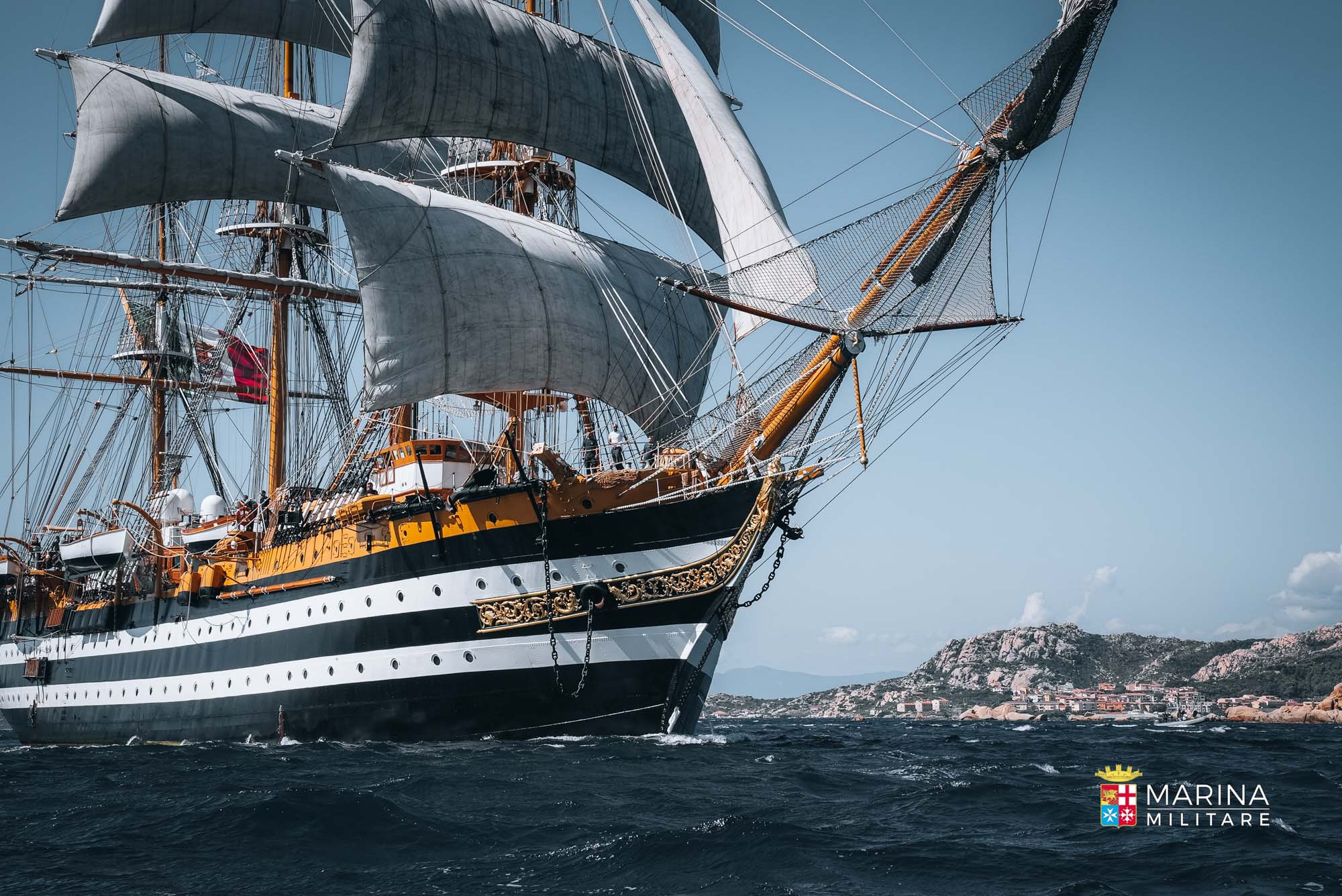 From one-off haute joaillerie creations to established watch collections, Bulgari cleverly leans on Italy’s rich heritage for inspiration. The latest piece to benefit from such a move — because doors of priceless Italian heritage apparently tend to open for Bulgari — comes in the shape of the Bulgari Aluminium GMT Amerigo Vespucci Special Edition that we went hands-on with on its namesake ship, docked temporarily in Naples, Italy. 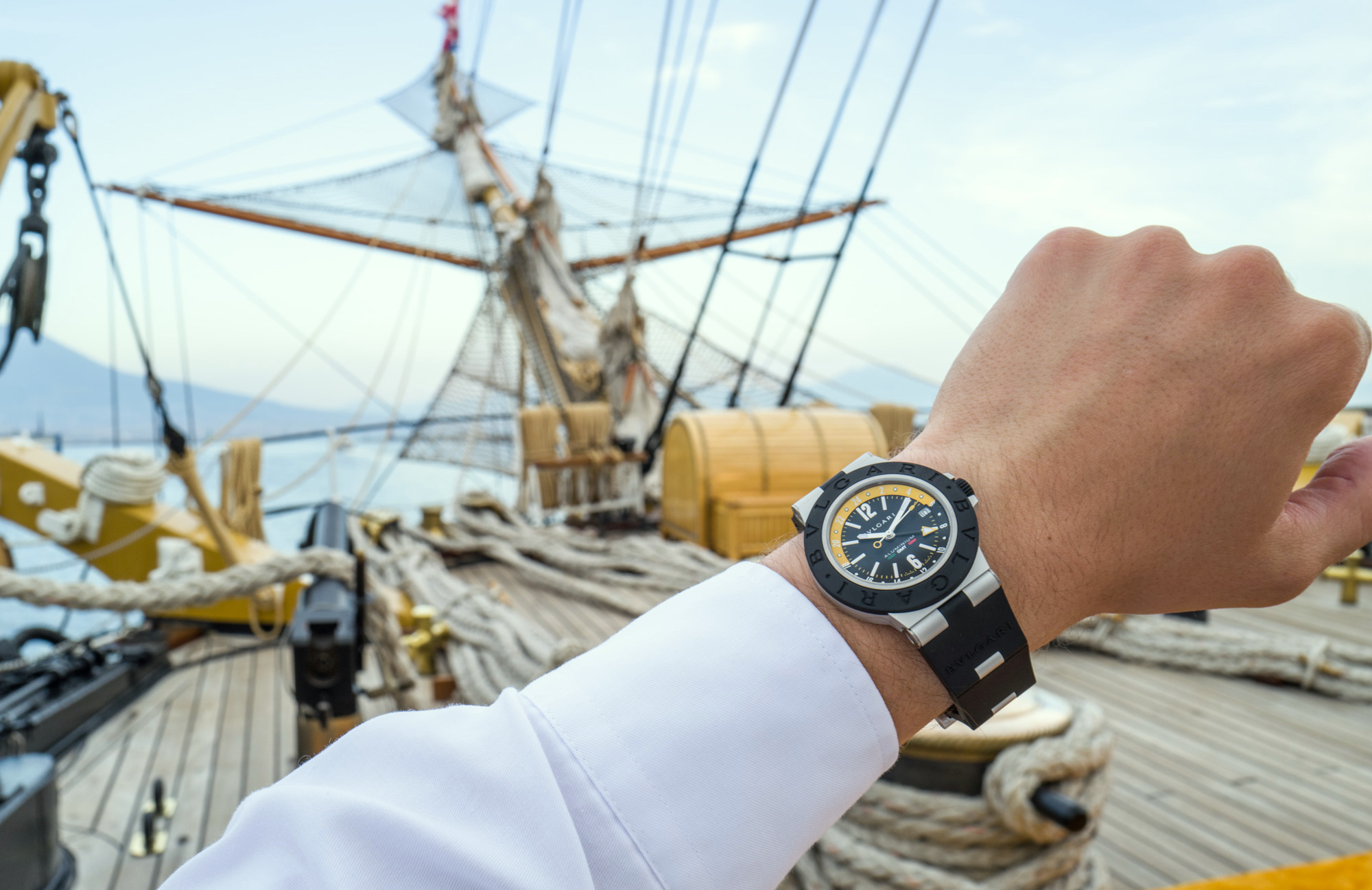 Just a couple of weeks after Bulgari received approval to take over the 1,900-year-old Pantheon in Rome for a night for the launch of the record-thin Octo Finissimo Ultra, the brand finds itself in Naples and aboard “the most beautiful training ship in the world.” We are no authority on how training ships rank in terms of beauty, but the Amerigo Vespucci — a vessel that has trained generations of officer cadets since 1931 — is certainly a childhood dream ship come real. Bulgari explains, “The call to explore and to excel is the basis for the audacity, constancy, and endurance of a watch that Bulgari dedicates to the spirit of this ship: The Bulgari Aluminium GMT Amerigo Vespucci Special Edition. The sails are billowing in a favorable wind, so prepare to discover your new compass.” 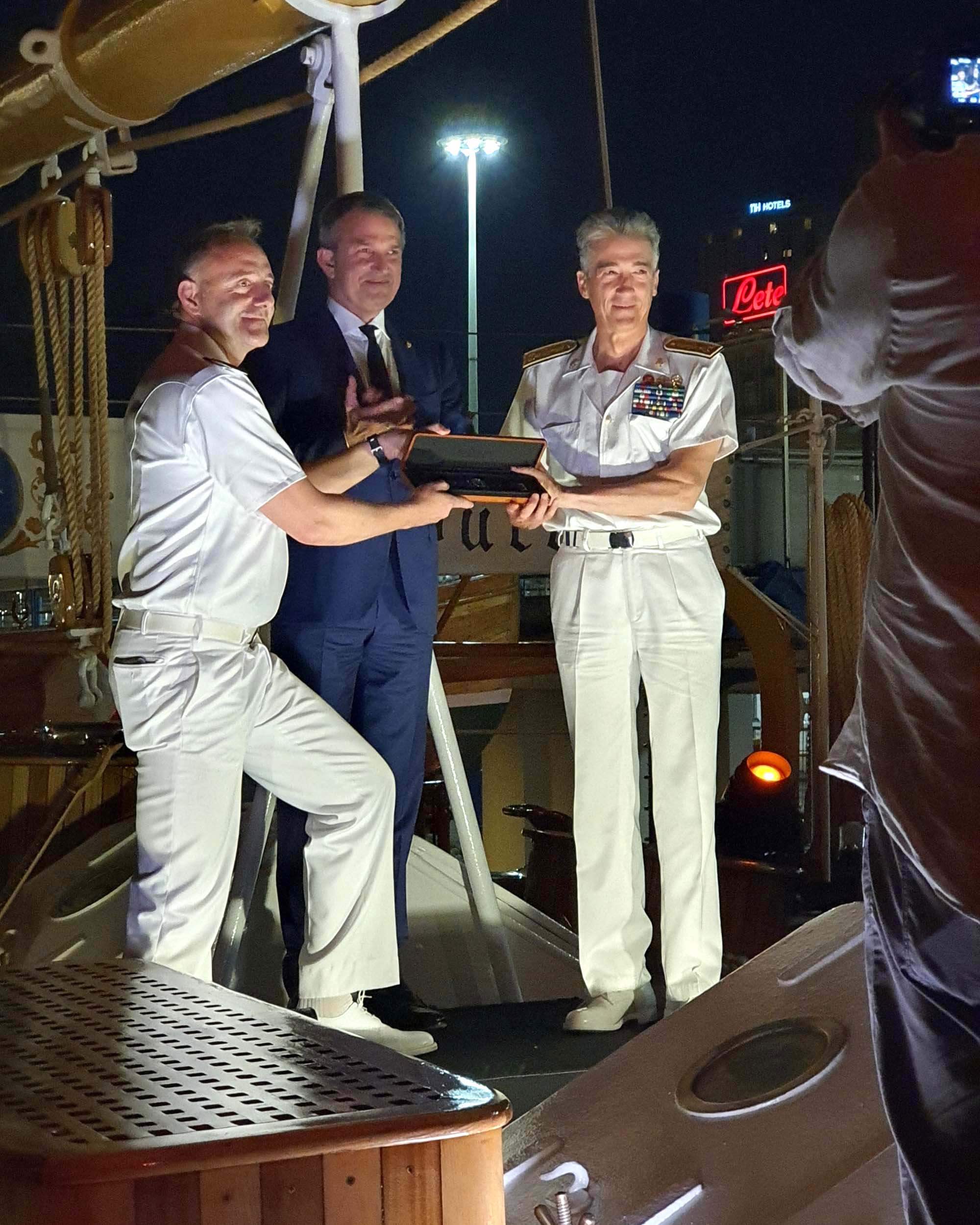 One of the Amerigo Vespucci limited-edition pieces has been gifted to the ship itself.

That all sounds excellent and very much in tune with the proud nation of its origins, where asking for and receiving a single cup of espresso is unimaginable without its own highly theatrical exchange. That said, what we see here is a gently refreshed version of the Bulgari Aluminium GMT that we debuted in 2021 here, following the refreshed Aluminium collection that premiered a year before. And it is here where product design experience gained through trial and error comes to play: We have seen the greater Swiss luxury watch industry do a large variety of outrageous limited and special editions, especially in the 2000s and early 2010s, from Jaeger-LeCoultre watches that worked as luxury car remote controls to unintelligible Zenith Defy pieces to a tattoo-faced Bulgari Endurer and many, many more. 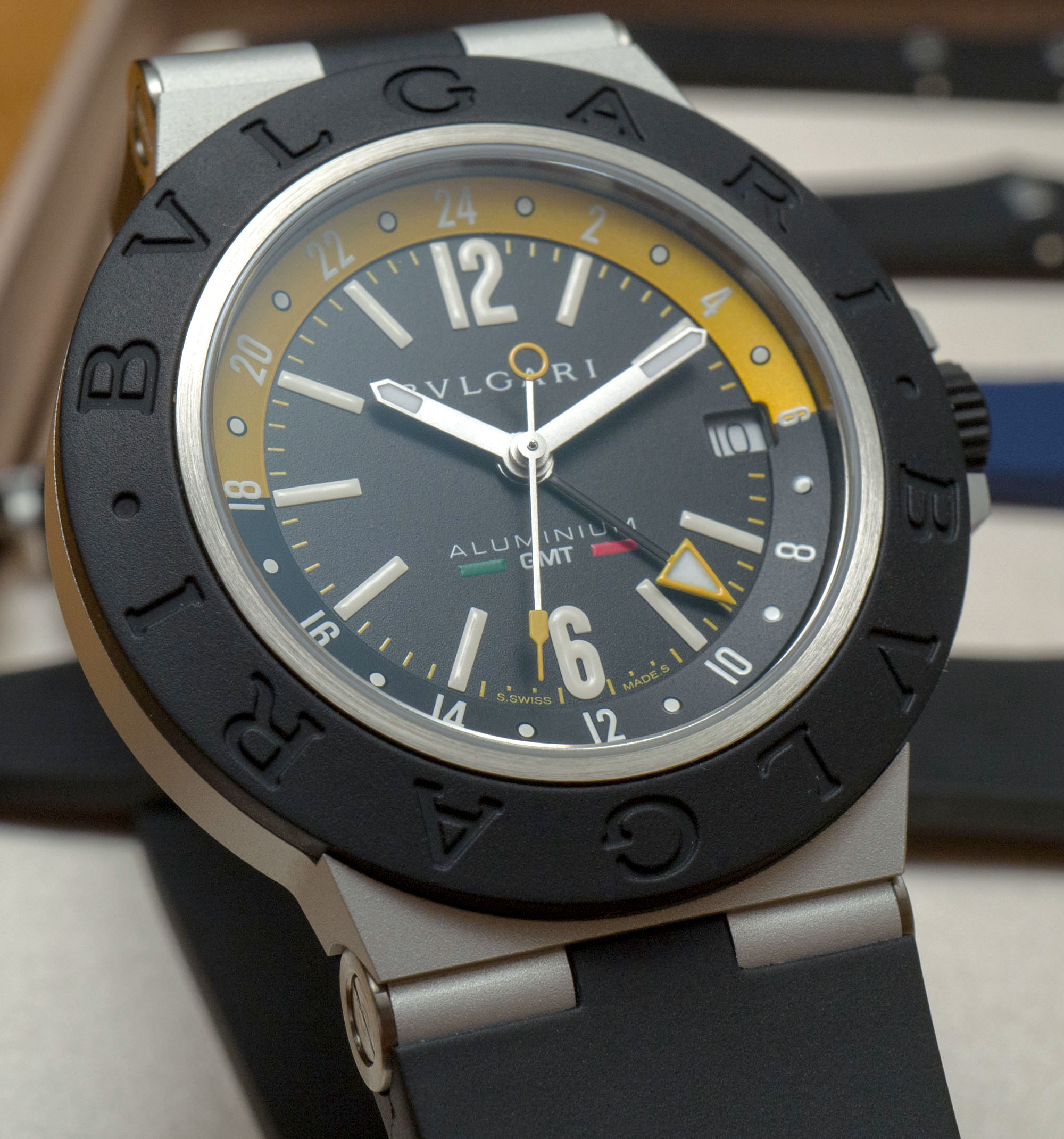 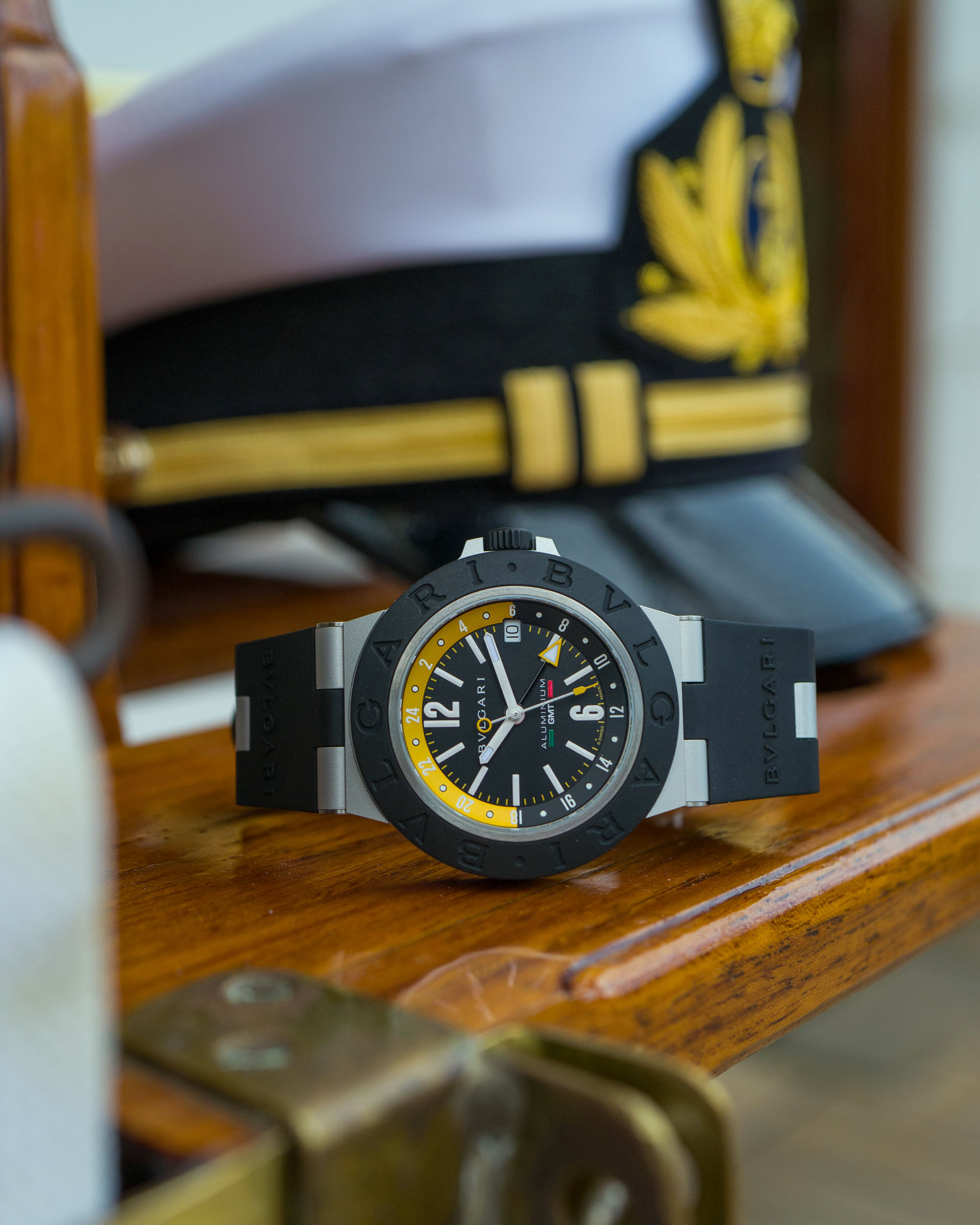 The varying success of these has taught brands across the board to take it easy with limited edition designs. Just because it’s thematically linked to a specific (sometimes highly specific) subject, that need not mean it also has to fully imitate or mimic said thing. “Have the story carry most of the theater and fanfare, and not the product” is what many hard-to-sell LEs have taught the industry. The respective partnership is bound to resonate with a portion of the audience and bring them closer to the product anyway, but spending big money on a watch that’s too vocal about its inspiration has become less and less favorable among customers the world over. Just look at the special edition Breitling, Tudor, TAG Heuer, and Zenith watches, of late. They are overwhelmingly tame compared to what they used to be a decade or so ago. 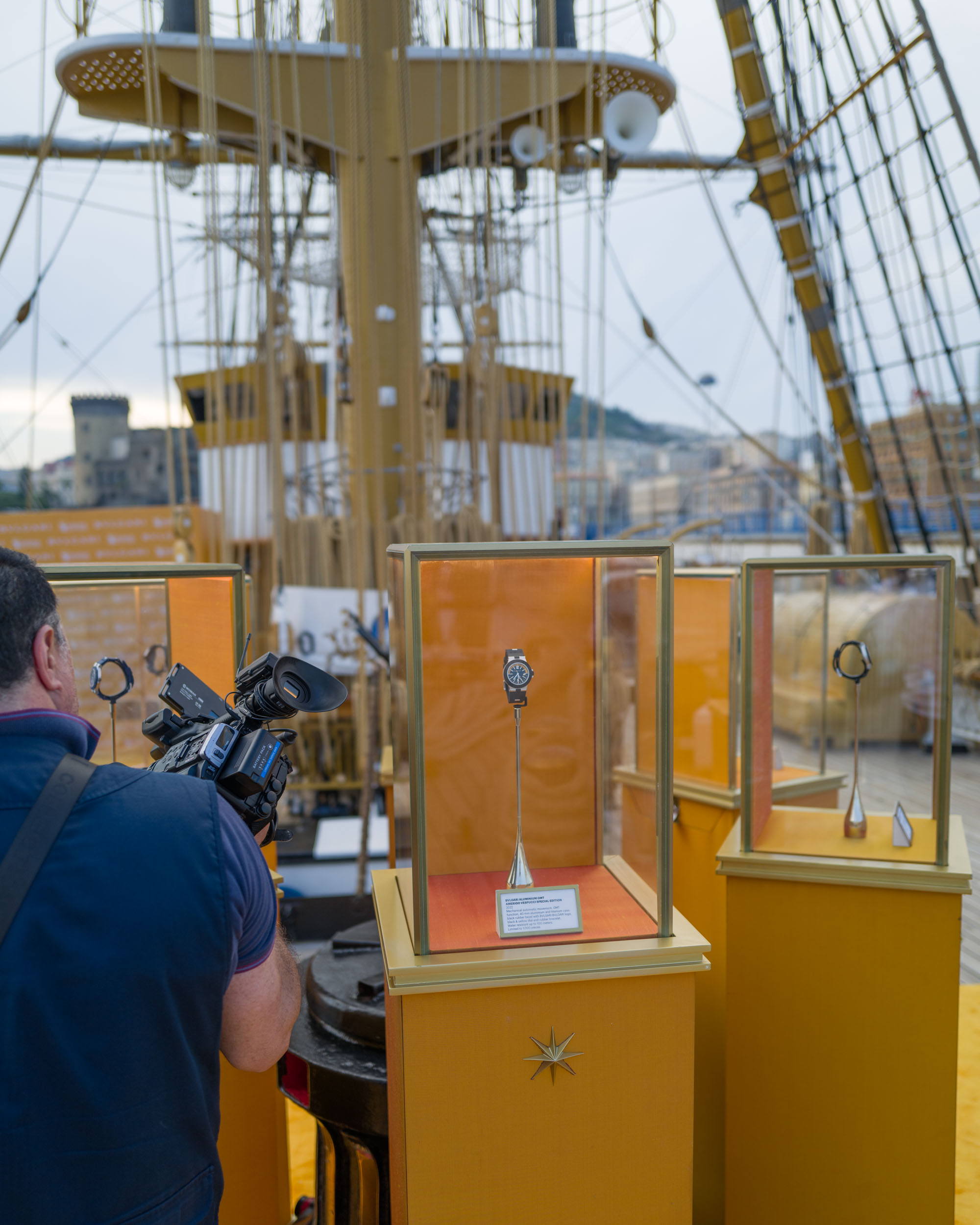 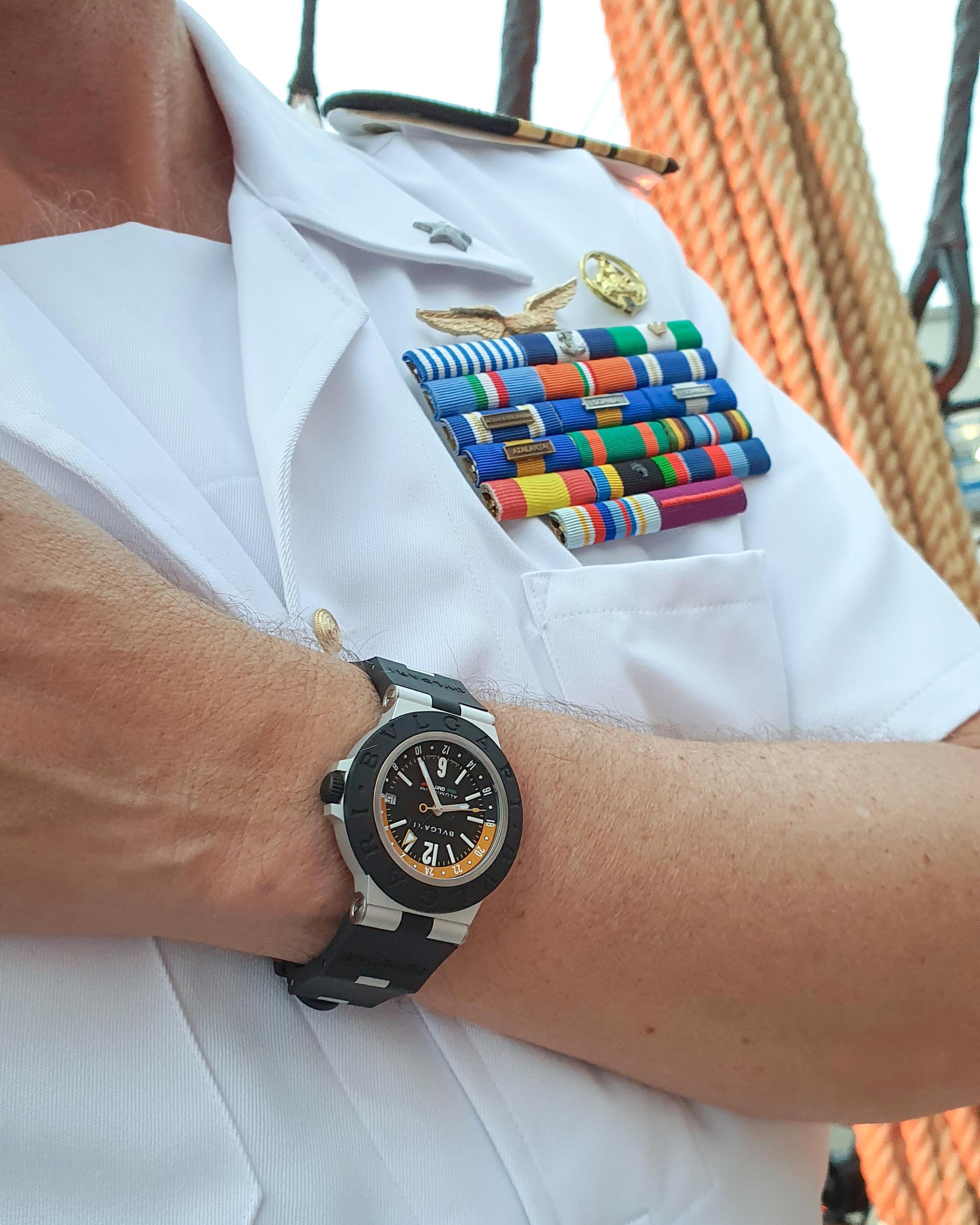 Brands concluded that the smart thing to do is to take an established model with its existing carefully calculated design, execution, and positioning, and gently, very gently, spice it up with a dash of color, perhaps a seldom-used design code or symbol (as opposed to forcing another brand’s shouty logo or too strong a color palette on a dial that had not been designed for such a purpose). A testament to lessons learned, the Bulgari Aluminium GMT Amerigo Vespucci Special Edition carefully introduces the Italian flag to its dial over 6 o’clock — something that arguably belongs on all Aluminium collection watches — and goes with a gold and black theme reminiscent of the Vespucci’s gilded and black railings. 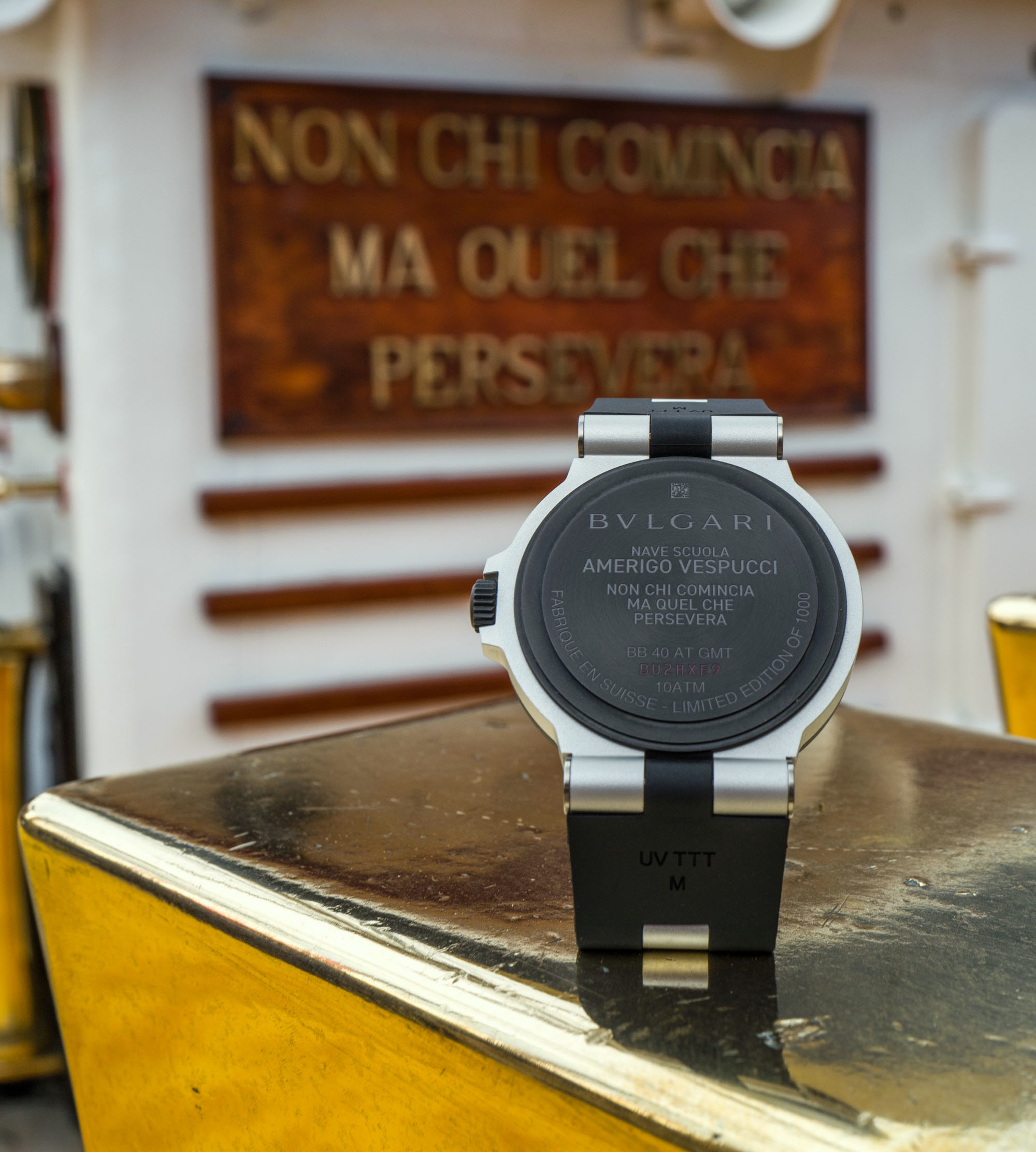 Case in point, the caseback is quite a bit more vocal about its inspiration, verging on overdoing it in that aforementioned early noughties style. Having three different languages on the same caseback does bring with it a whiff of Italian madness — Fabrique en Suisse in French, Limited Edition Of 1000 in English, and “Non chi cominicia ma quel che persevere” in Italian (Not he who begins, but he who perseveres), along with Nava scuola (Navy School) is quite a lot to take in. Having everything in Italian would’ve been dripping cool and totally fitting for this piece. There’s even a QR code atop, in case the trilingual script did not suffice for a full knockout. You’ve got to love Italians and the fact that a trilingual caseback apparently just doesn’t surpass their stimulus threshold. 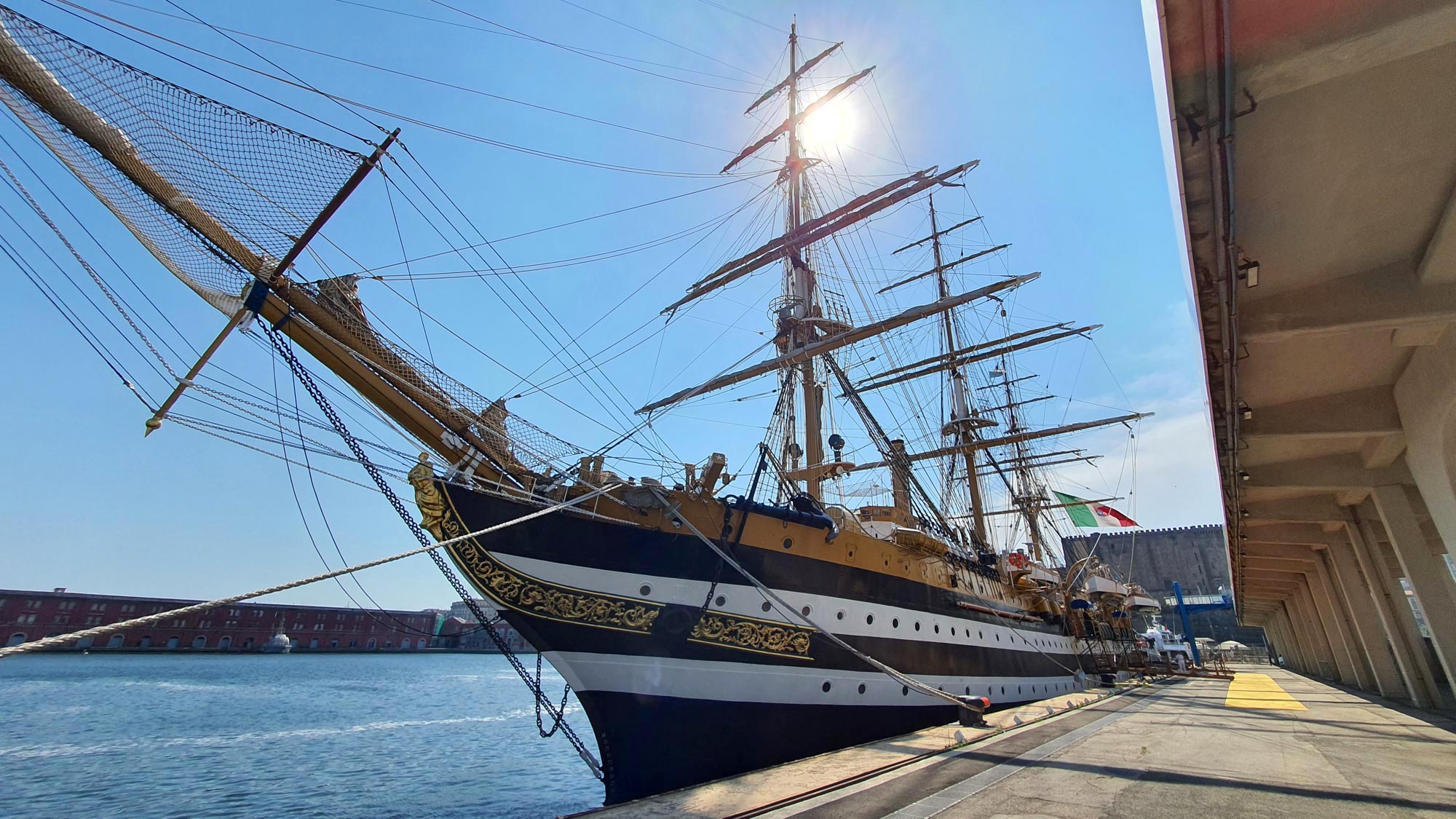 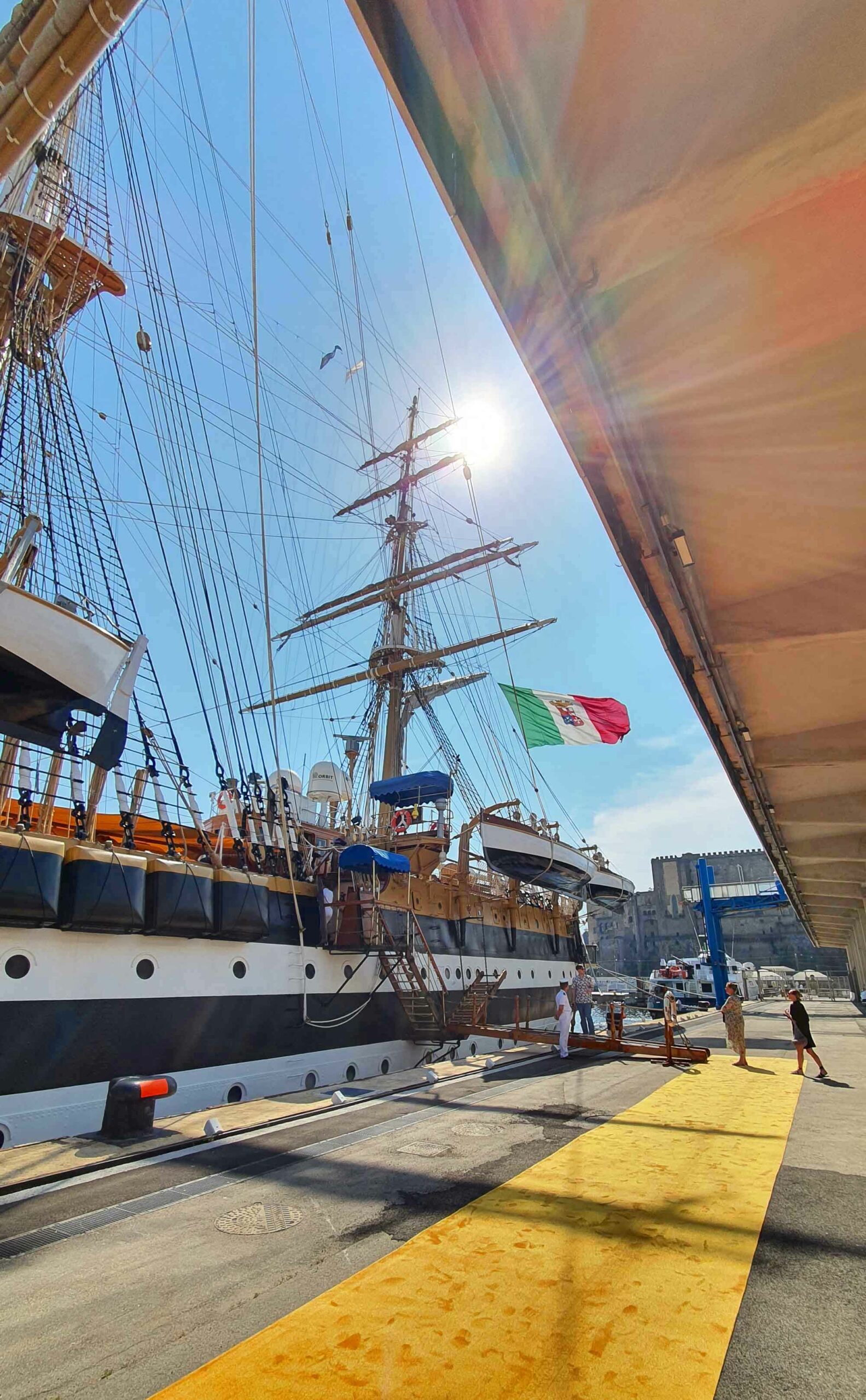 Aboard this 4,000-ton masterpiece of a ship, we chatted with the design director of Bulgari watches, Fabrizio Buonamassa, who’s been with the brand for around two decades now. When asked where the inspiration for this Amerigo Vespucci watch and collaboration came from, he referenced two sources. First is the success the brand experienced with a 2020 limited edition of the Aluminium when it produced 1,050 pieces in collaboration with the Frecce Tricolori, the Italian air force’s famed aerobatics team that raised spirits across Italy during its first and most painful lockdown during the pandemic. It was this action of the Frecce Tricolori that motivated Bulgari, a fellow Italian company, to create something together. Second, a member of Bulgari’s management had served on the Amerigo Vespucci along with a current high-ranking official of the Italian Navy. This shared past helped connect the watchmaker with the Marina Militare, the Italian Navy operating the Amerigo Vespucci. It’s fascinating how this massive luxury brand inside the largest luxury group found a way to collaborate with a major navy of the world and one of its most highly regarded assets, which also happens to be a celebrated icon of Italy. 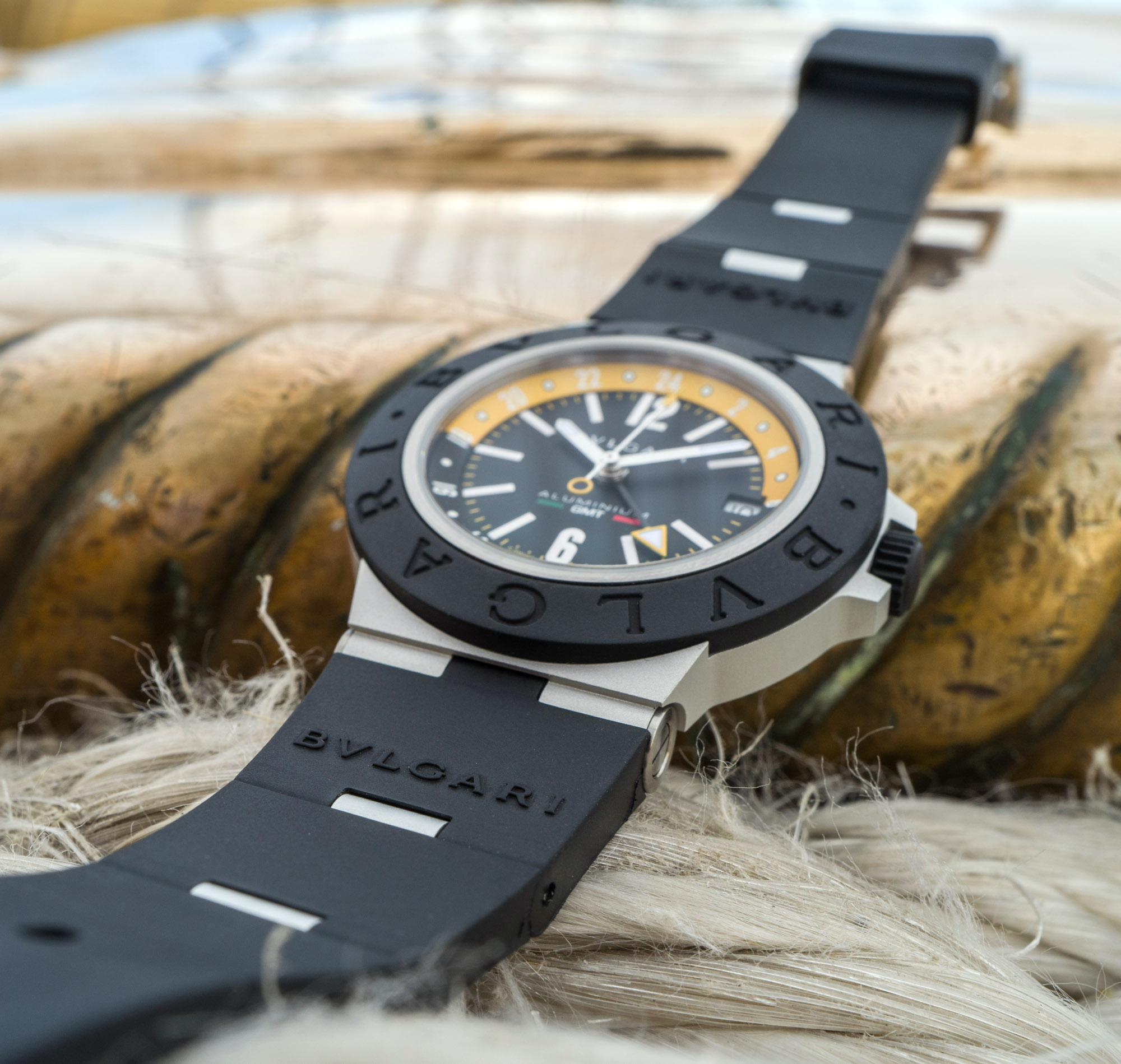 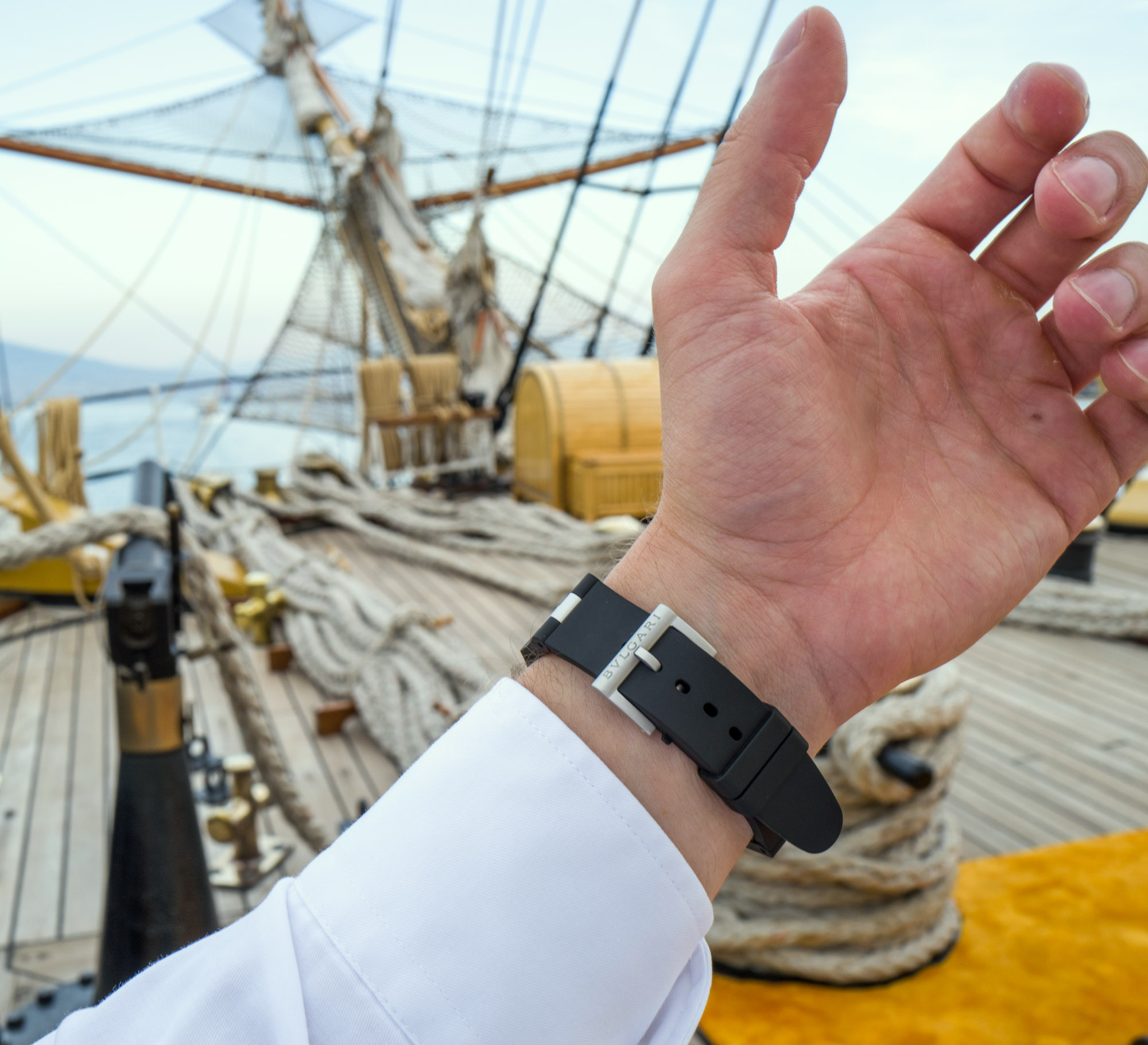 We loved the original Bulgari Aluminium of 2020 for its wearing comfort, fit, and finish. Aluminium and rubber rank low among base materials as far as luxurious feel is concerned, but they can and, in this instance, do make for a great-feeling watch. To the touch, the Aluminium is truly outstanding: The rubber bezel and strap are soft but never sticky, the fit between aluminium and rubber parts is superb and the articulation of the strap has just the perfect amount of resistance, without feeling flimsy or too stiff. The whole thing is just soft and supple in ways cold and sharp-edged steel watches of this segment aren’t. The crown, the caseback, and the screws holding the strap links on all points are in titanium — and a titanium caseback is a great way to increase wearing comfort, as it rarely, if ever, feels as cold as steel. 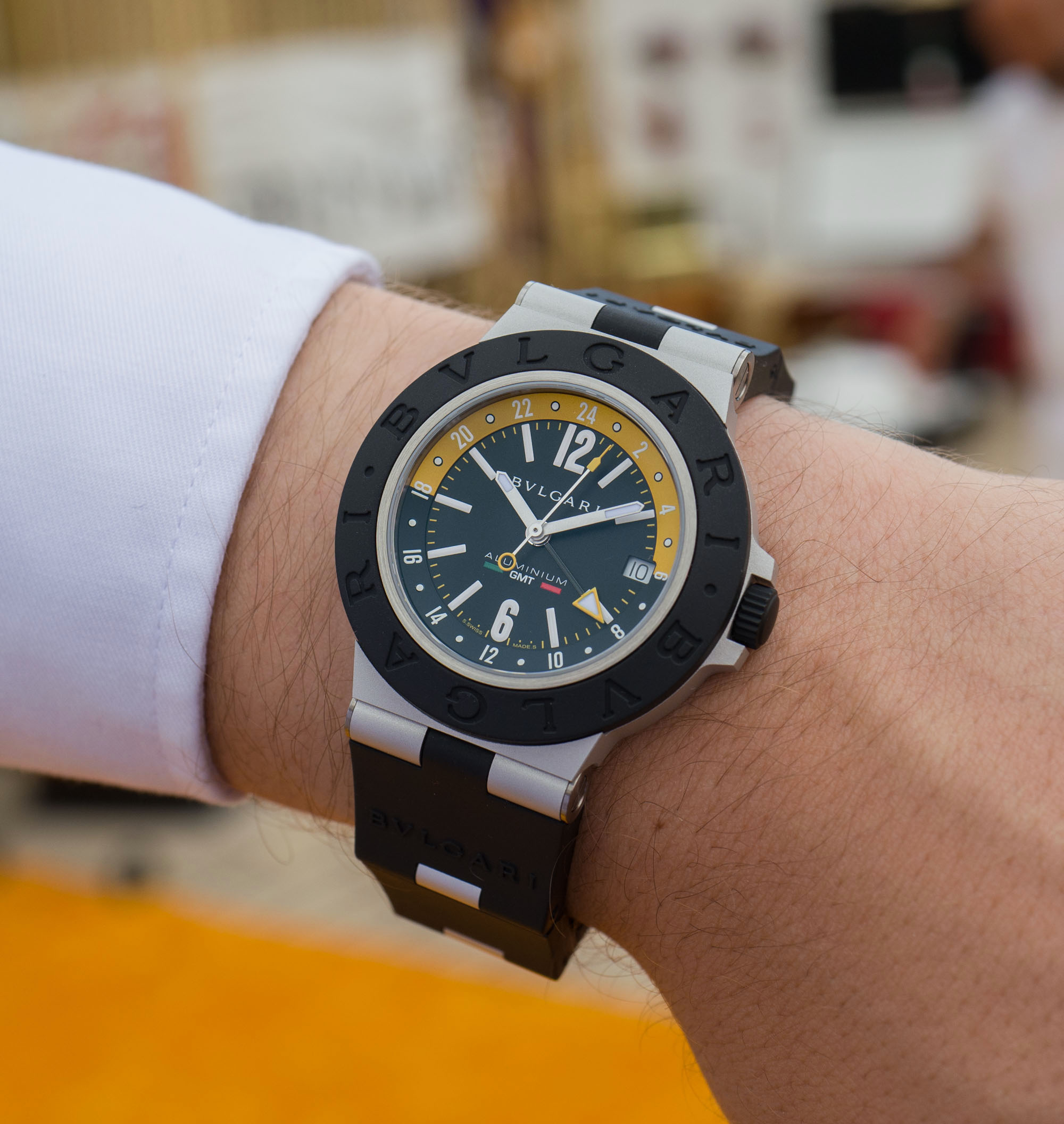 The 40mm-wide case wears thin and light — aluminium is around 75% lighter than steel, after all — and is water-resistant to 100m. A screw-down crown would’ve been a welcome addition, though. The hands and hour markers are filled with Super-LumiNova while the titanium flange ring in gold and black is neatly coordinated with the seconds and GMT hands and the minute track around the dial. Sitting behind the titanium caseback is BVL Calibre 192, a supplied movement that operates at 4 Hertz with a power reserve of 50 hours, apparently. 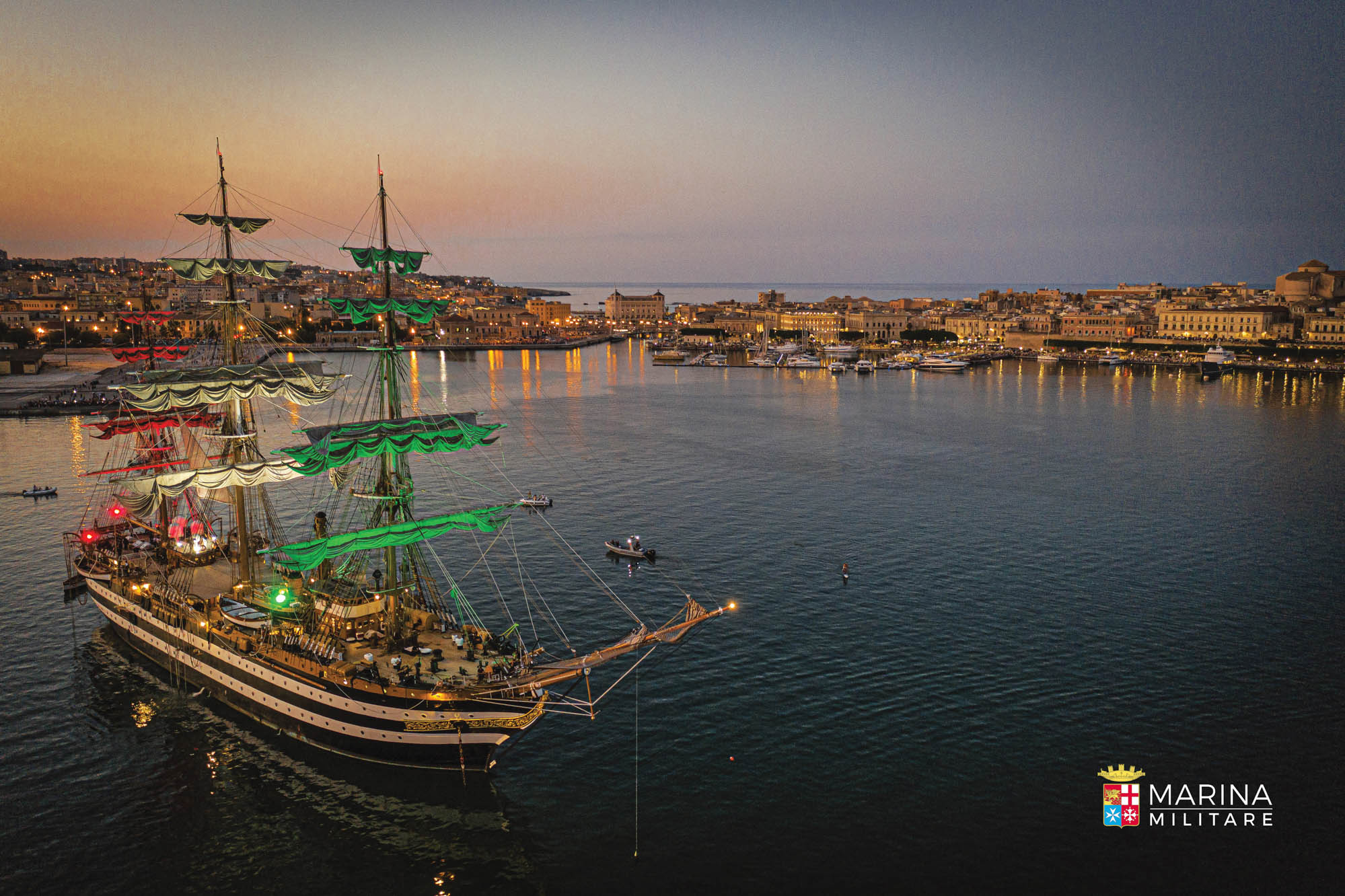 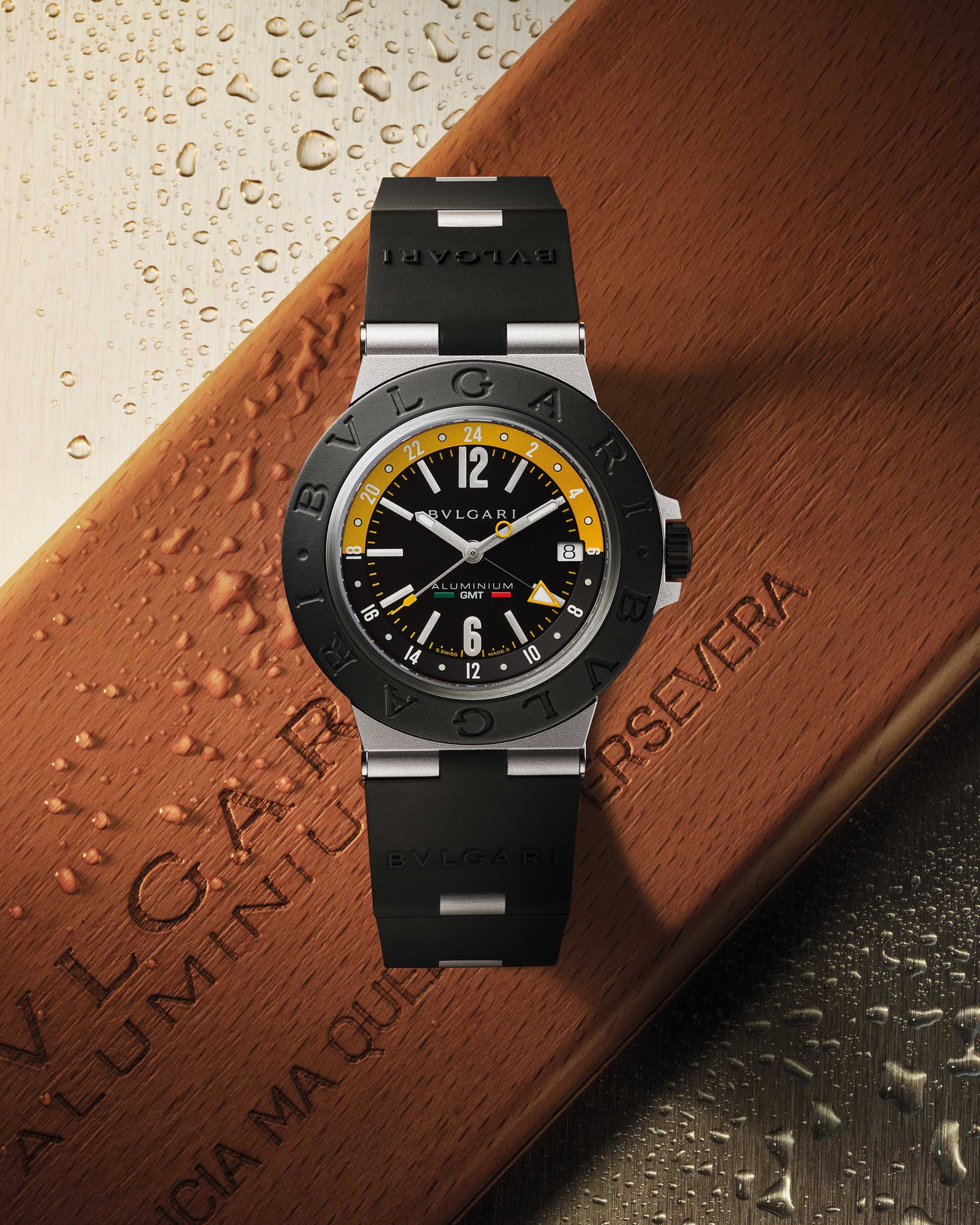 There’s national pride, and then there’s Italian national pride. A lot has been said and written about this wondrous thing, and we won’t be adding much to that today, apart from just this one thing: Time and again, from the most different walks of life, fellow Italians display just how strongly they are bonded together by not just the ethos, but also the practice of their shared pride. At the launch event of the Bulgari Aluminium GMT Amerigo Vespucci Special Edition, we saw high-ranking officials of the Italian Navy and folks from Bulgari management unknowingly give us a lesson in what all this feels like in practical terms. Every officer and crew member serving on the Amerigo Vespucci takes immense pride in the opportunity to serve on an icon, a “floating embassy” of Italy — and yet they all showed genuine humility and respect toward the Rome-based luxury company. In his speech, an officer of the Italian Navy pointed out that this in part is thanks to their equally long history, the Italian Navy having been established in 1861 as Regia Marina (renamed Marina Militare in 1946) and Bulgari founded in 1884, in Naples. 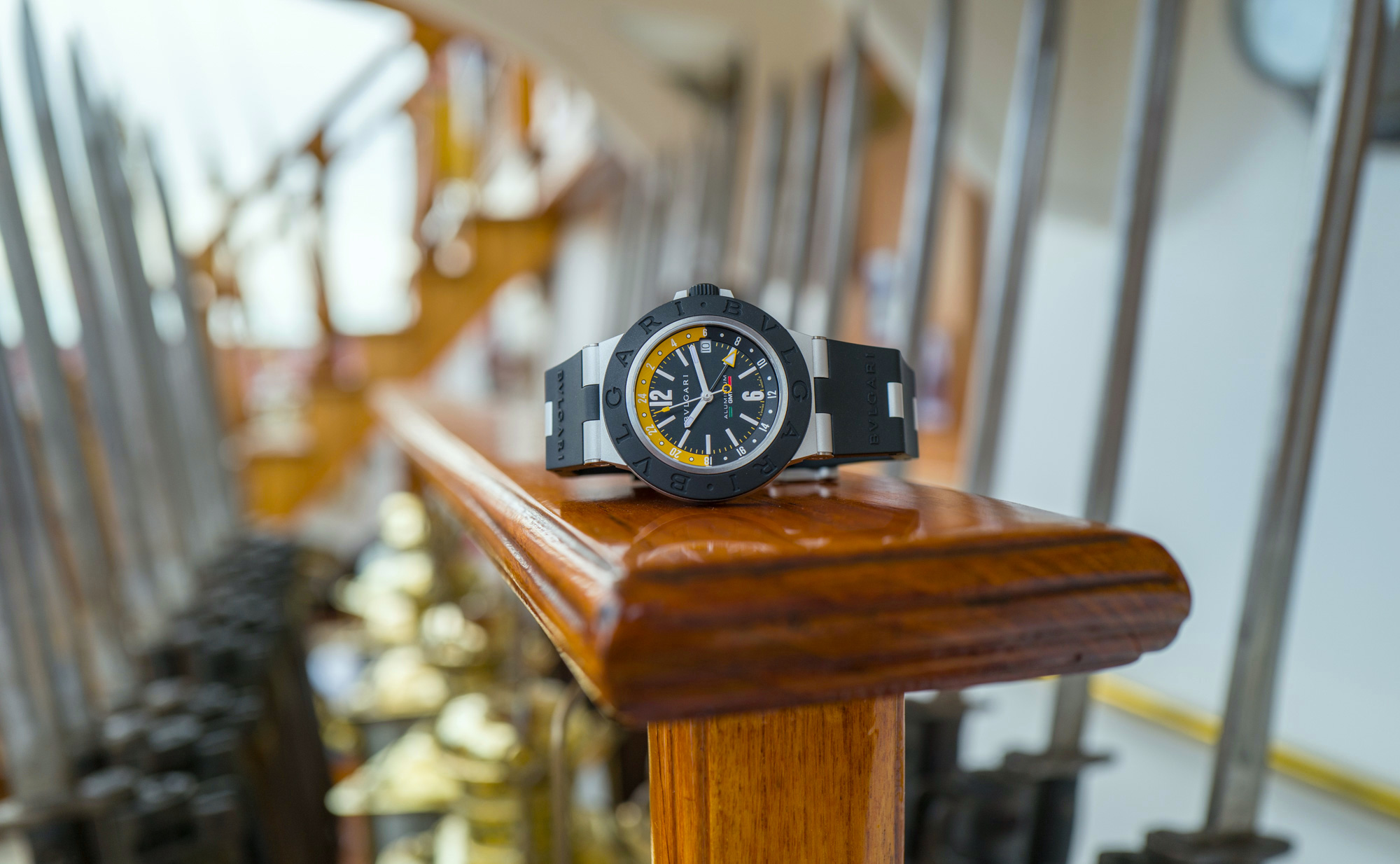 The Bulgari Aluminium GMT Amerigo Vespucci Special Edition watch is priced at $3,950 and it is the latest, but certainly not the last, piece in this series of Bulgari’s Italian collaborations. As long as it can find partners as welcoming as the Italian Navy, Ducati, and Frecce Tricolori, it will easily find a welcoming audience among fans of Bulgari and all things Italian. You can learn more at the brand’s website.