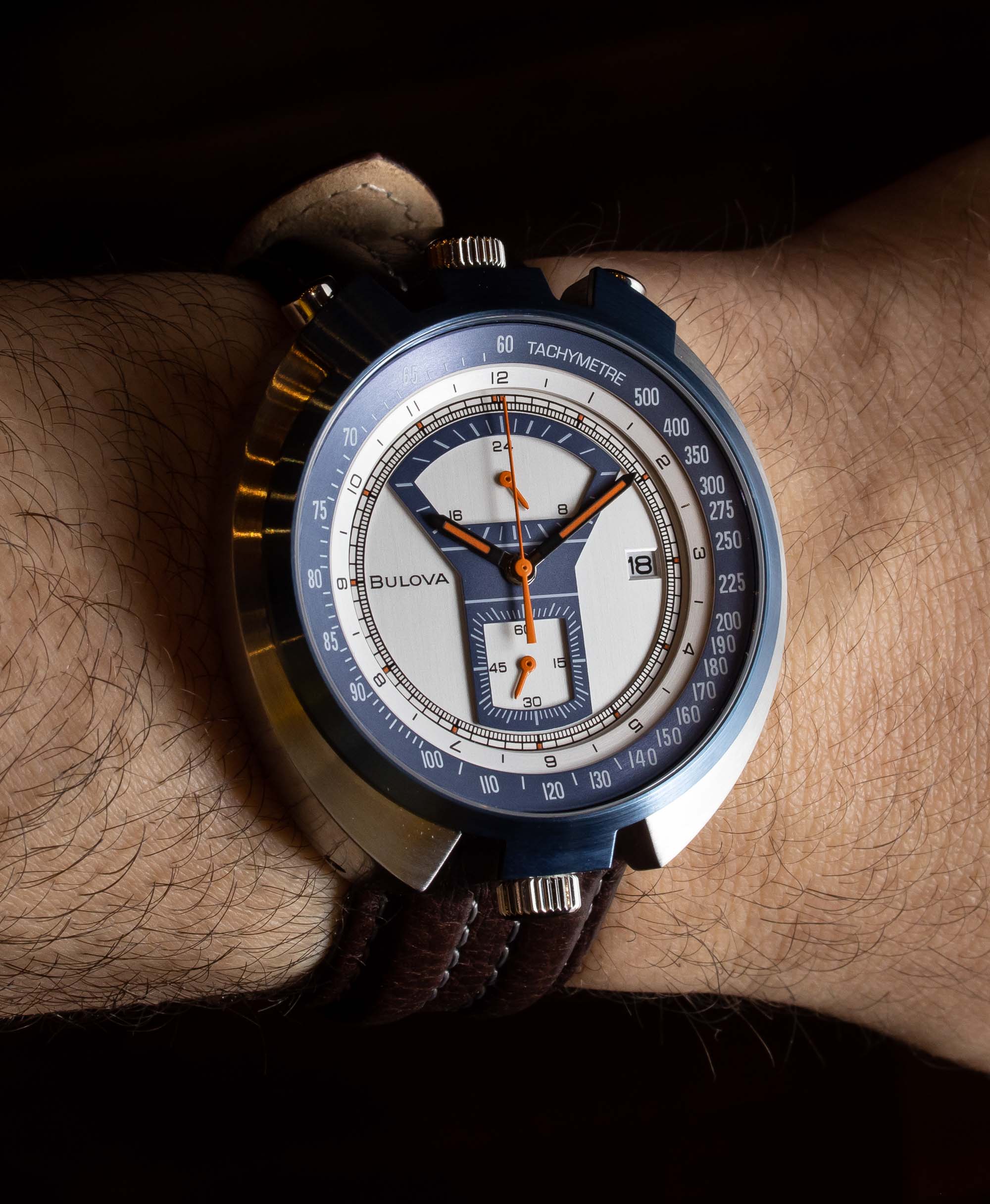 Founded in 1875, Bulova is one of the most famous and respected names in America’s watchmaking history, and the brand has produced timepieces that have been issued to members of the United States military and even worn by astronauts on the surface of the moon. Bulova was one of the most prominent watch companies throughout most of the 20th century and produced an incredible variety of timepieces, spanning everything from mil-spec field watches to funky colorful racing chronographs and everything in between. The modern Bulova brand has no problem dipping into its history to revive fan-favorites from the archives, and the new Archive Re-Edition Parking Meter Chronograph brings back the design of the original reference 1008-6W chronograph watch from 1973, which was nicknamed the “Parking Meter” by enthusiasts and collectors. 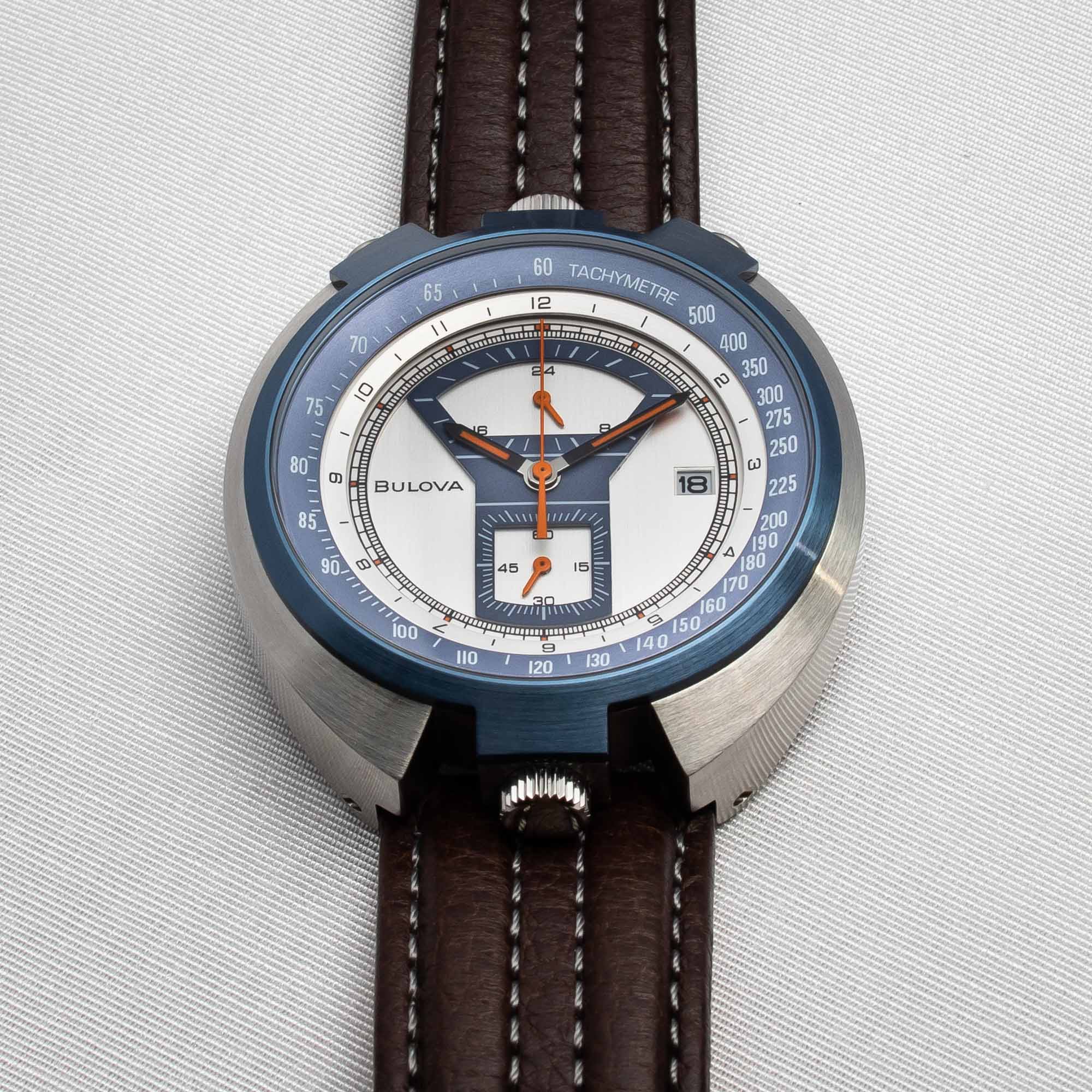 The stainless steel case of the new Bulova Parking Meter Chronograph measures 43mm in diameter and follows a “bullhead” configuration, with its pushers located all the way up at the 12 o’clock side of its case. While the original model from 1973 featured only one crown that was located opposite the chronograph pushers at the 6 o’clock location, the new re-edition includes two crowns, with one placed between the pushers at 12 o’clock, and the other placed directly opposite of it in the same position as the one on the original. The top crown is used for setting the time, while the one at 6 o’clock offers access to an internal bidirectional bezel that allows for a simplified dual-time zone display or a way to track elapsed hours. 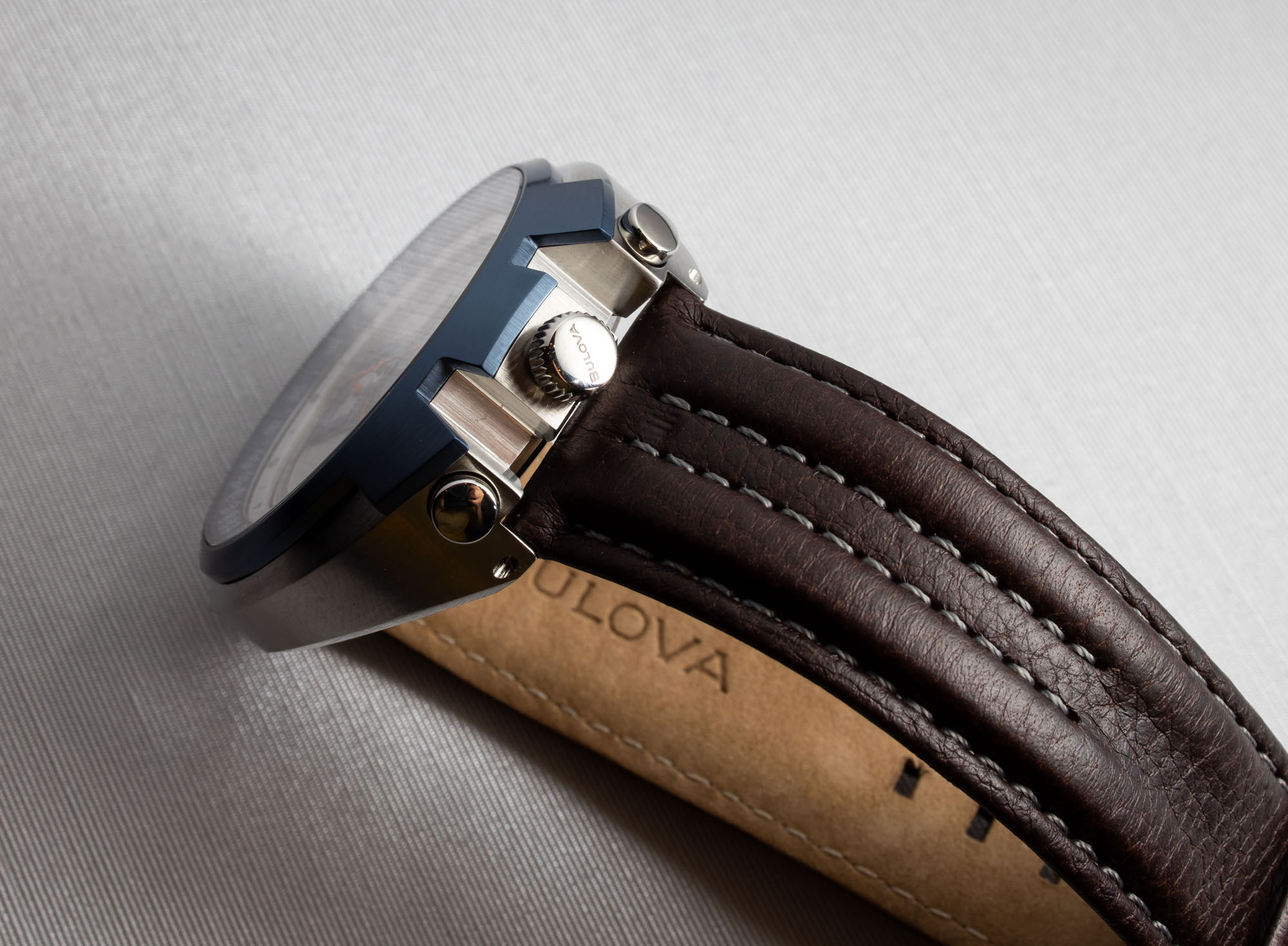 Sitting on top of the case of the watch is a scratch-resistant sapphire crystal, while surrounding it resides a blue ion plated bezel that recalls the design of the original vintage model, and extends in the protruding areas that lead up the the two crowns and chronograph pushers. The integrated lug structure accepts standard 22mm straps and keeps the 43mm case relatively compact, while simultaneously giving the new Bulova Parking Meter Chronograph more of a circular overall profile that measures approximately 43mm lug-to-lug. Although the case itself doesn’t really have any protruding “lugs” in the traditional sense of the word, the lugs that are there are drilled, which means that strap changes will be quick and easy should you wish to swap out its included brown leather strap that has channeled padding and blue-gray contrast stitching. 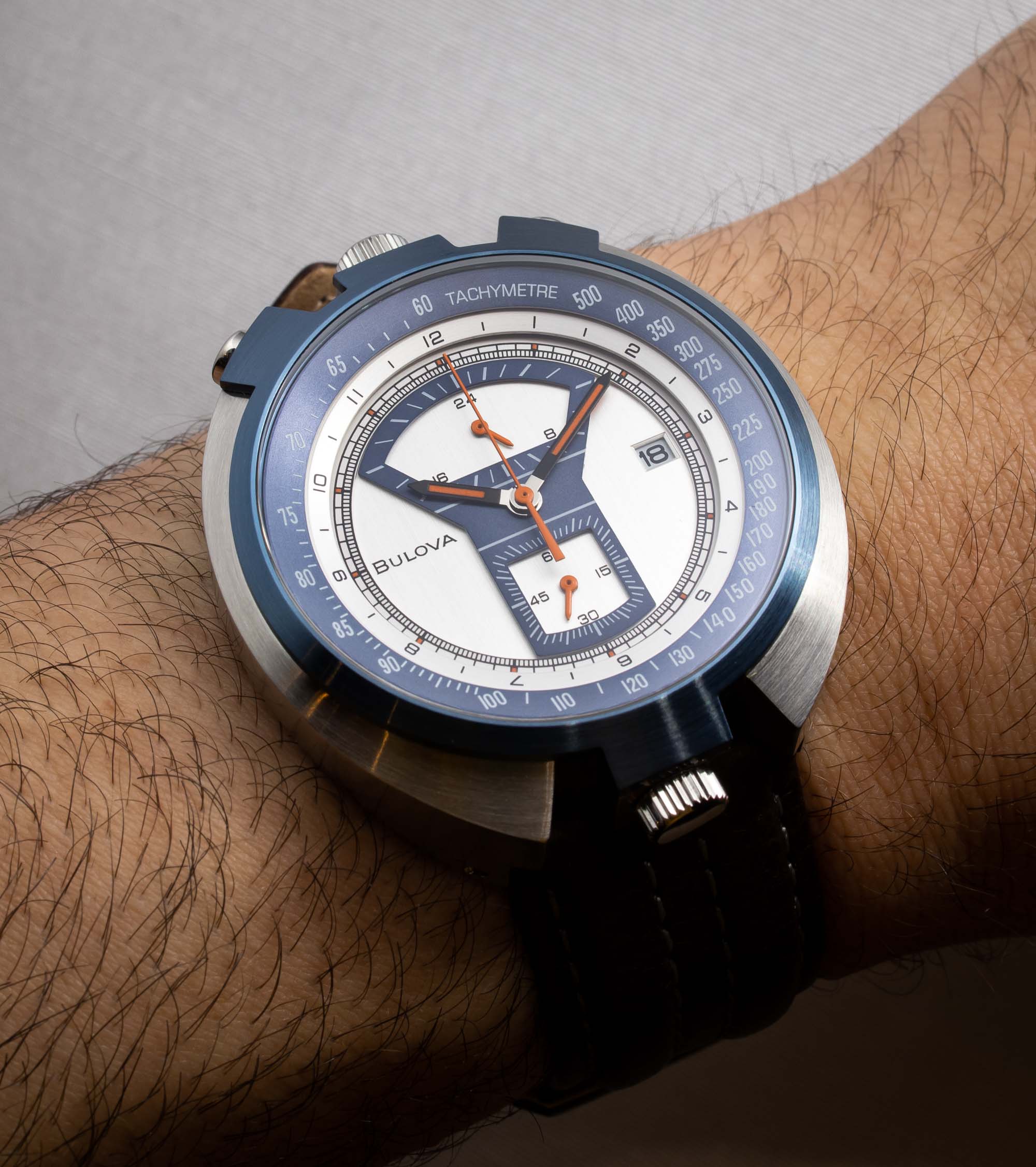 Fitted to the reverse side of the watch is a standard screw-down caseback that is engraved with the watch’s individual number out of 5,000 pieces and celebrates the 50th anniversary of the original Bulova “Parking Meter” chronograph. Despite featuring a pair of chronograph pushers and two different crowns (none of which are the screw-down variety), the new Bulova Parking Meter Chronograph still offers users a solid 100 meters of water resistance, meaning that it should be more than capable of standing up to whatever activities you might encounter, which is entirely appropriate given its fun and sports-forward styling. 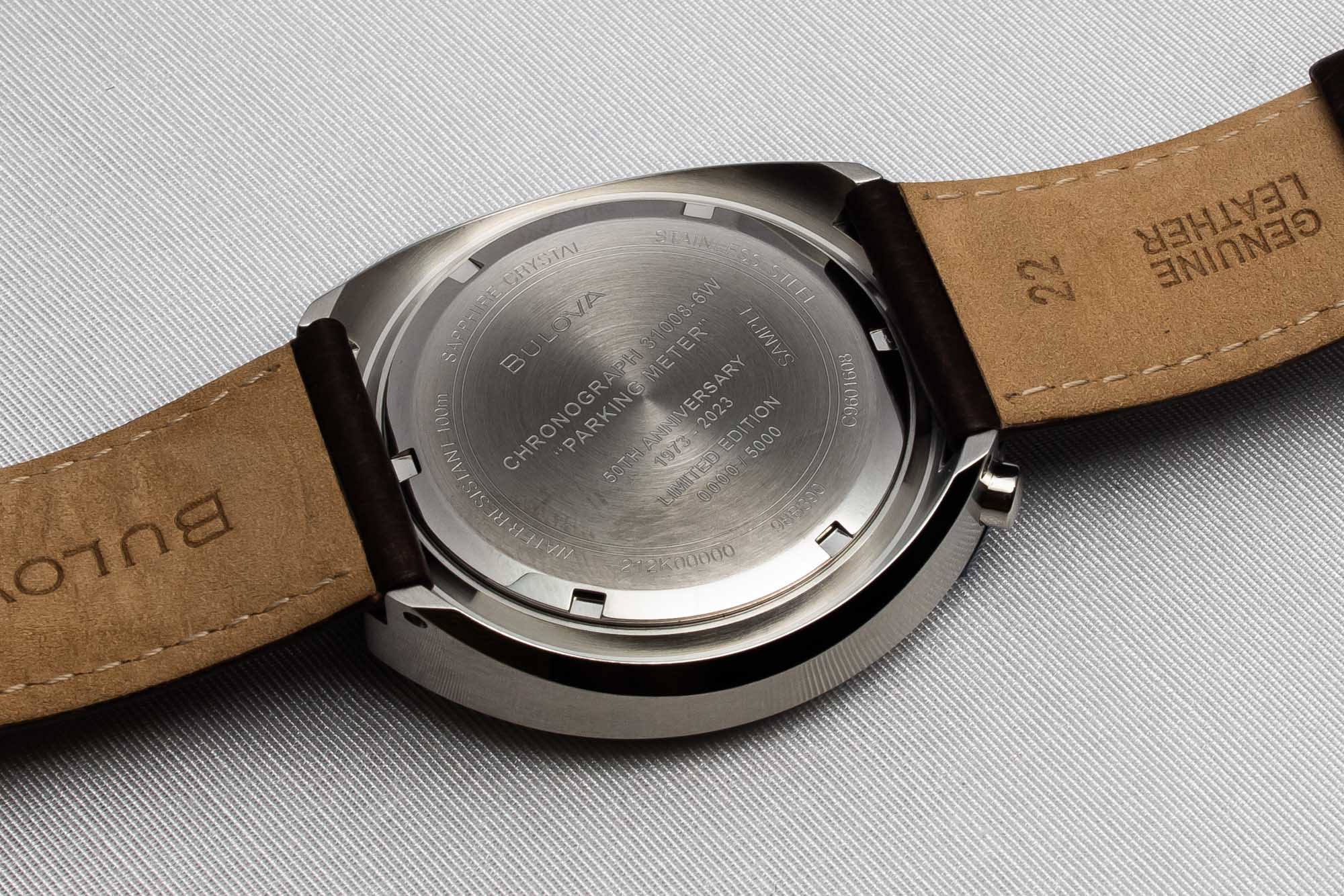 The dial of the new Bulova Archive Re-Edition Parking Meter Chronograph is heavily inspired by the design of the original 1973 model, although just like the rest of the watch, it is not an exact recreation of its vintage predecessor. Sitting against a silver-tone base later is the model’s signature blue frame that forms the sub-dials and resembles the silhouette of an old mechanical parking meter. On the original vintage model, a 30-minute counter resides in the upper sub-dial, while the lower register is devoted to an accompanying 12-hour totalizer. On the new re-edition of the Bulova Parking Meter, the lower sub-dial records the minutes for the chronograph, while the top register displays the time of day in a 24-hour format. On both models, a date window sits at its usual place at the 3 o’clock location, while surrounding the dial is a railroad-style minute track with small bright orange luminous accents at the 5-minute markers. 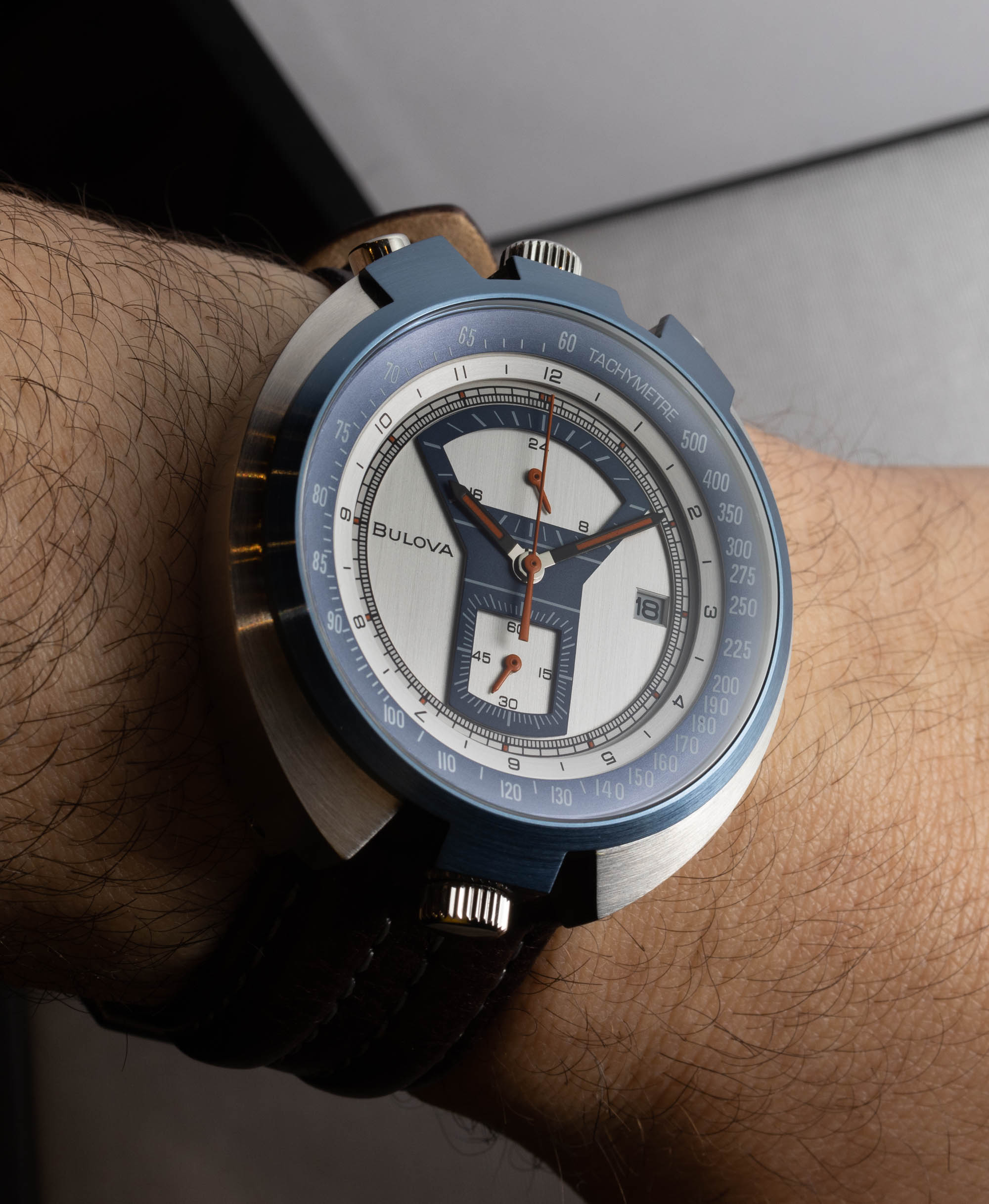 Moving outward from the dial and sitting just beyond the internal rotating 12-hour bezel is a tachymeter scale in white that is printed along the blue, angled rehaut. Also a design feature carried over from the vintage original, the tachymeter scale can be used in conjunction with the watch’s bright-orange, centrally-mounted chronograph seconds hand to measure either speed or distance, while its blue color continues the design of the external bezel and ties its contrasting color to the rest of the watch. The pops of bright orange continue onto the rest of the hands, with both of the ones for the two sub-dials appearing in the same bold color. Similarly, the centrally-mounted hour and minute hands, which are largely finished black, have center portions that are filled with bright orange luminescent material that visually ties them to the rest of the watch, while also providing access to the time in low-light conditions. 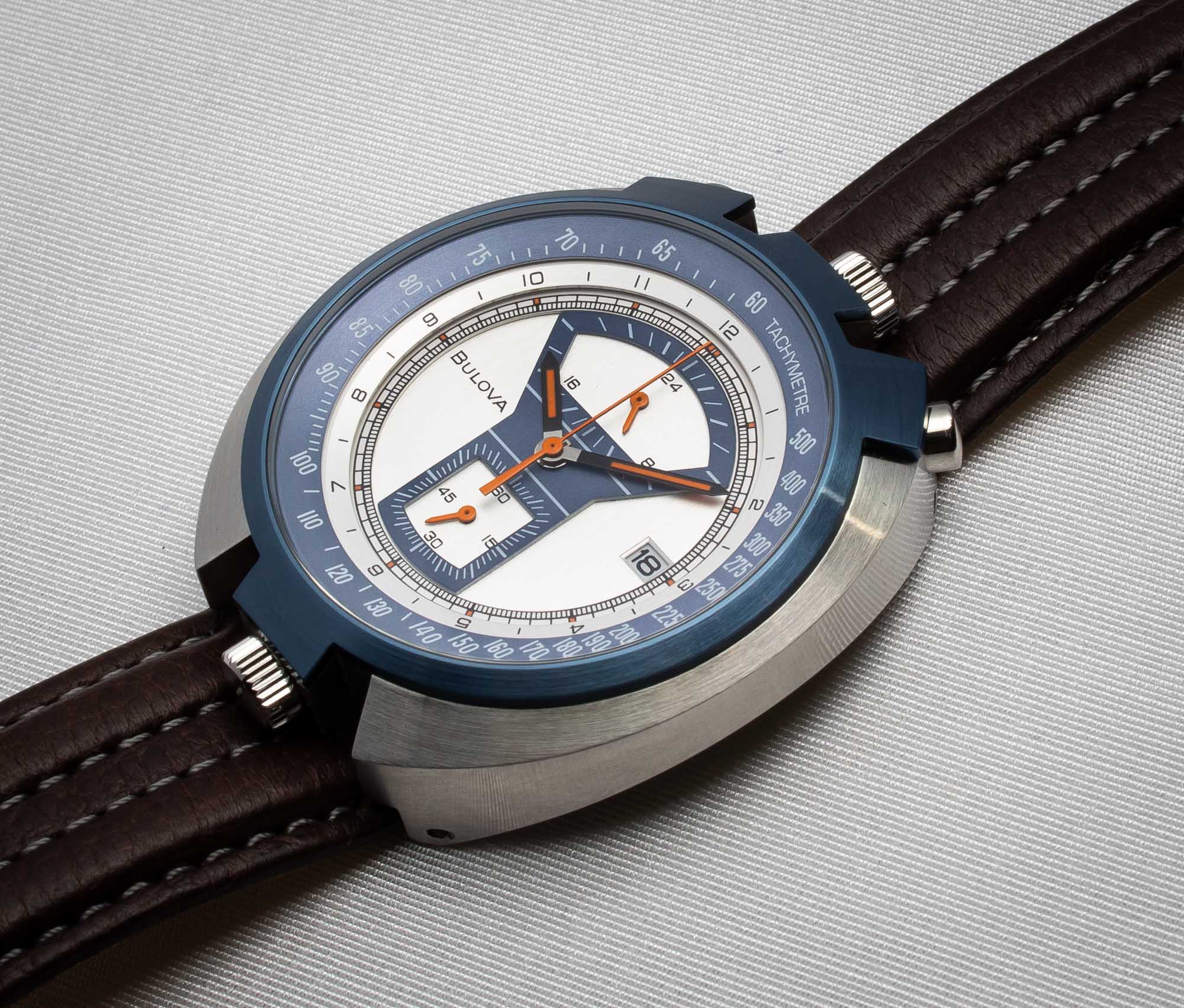 Internally, we see another major difference from the original vintage model. While the version from 1973 was powered by a self-winding mechanical movement, the new Bulova Archive Re-Edition Parking Meter Chronograph runs on the battery-operated Miyota OS21 quartz caliber. In addition to guaranteeing timekeeping accuracy to within 15 seconds per month, the use of this movement also helps explain both the crown placement on the updated model, along with the updated functionality of its sub-dials. While some collectors and mechanical purists may roll their eyes at quartz movements, a reliable and maintenance-free quartz caliber is exactly what you want powering a chronograph watch at this price point, despite the fact that it offers very little horological intrigue compared to its mechanical counterparts. 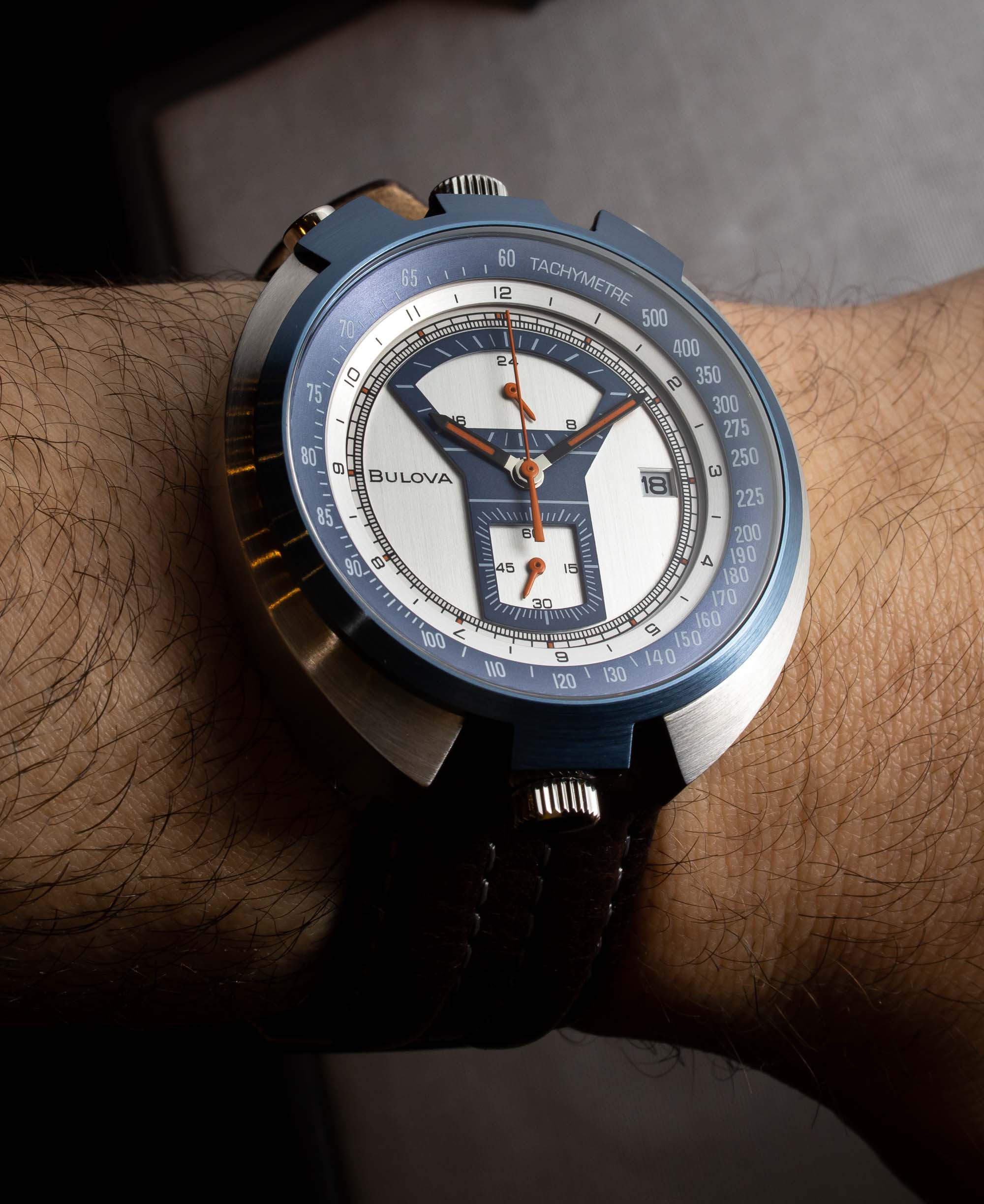 Aside from the fact that there is somewhat of a price floor when it comes to watches with mechanical chronograph movements, future service costs for these more complex calibers is also inherently more expensive, and no one wants to pay as much (or more) to service their watch than its original purchase price. Nothing is cheaper or easier than popping a new battery into a quartz movement, and this means that your watch won’t ever be relegated to the back of the kitchen drawer when you’re handed a service estimate that costs more than the retail price of the watch itself. Additionally, the grab-and-go convenience offered by a quartz movement is perfectly suited for a fun and colorful sports watch like the Bulova Parking Meter, which very well might not be a person’s everyday watch, but rather the timepiece that they reach for on weekends or whenever they go on vacation. 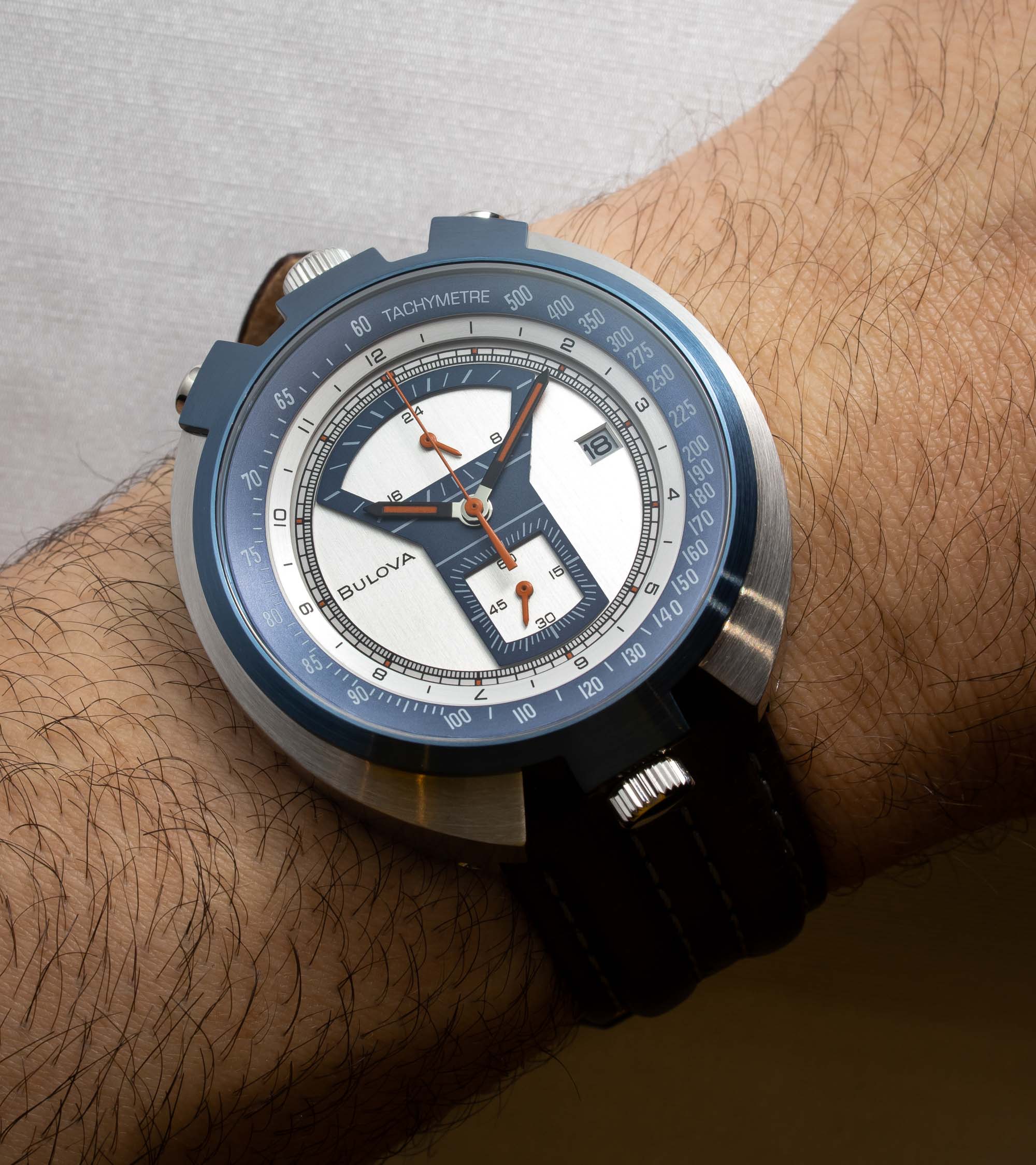 Like most anniversary-edition pieces, the Bulova Archive Re-Edition Parking Meter Chronograph will be produced as a limited-edition model, with a total of 5,000 pieces available worldwide. Additionally, with an official retail price of $595 USD, the watch is firmly positioned within the attainable category, which makes it ideally suited to be the fun and playful sports watch that can be worn carefree throughout all of your weekend activities — just the way its colorful 1970s design suggests it should be. For more information or to purchase the watch, please visit the manufacturer’s website.