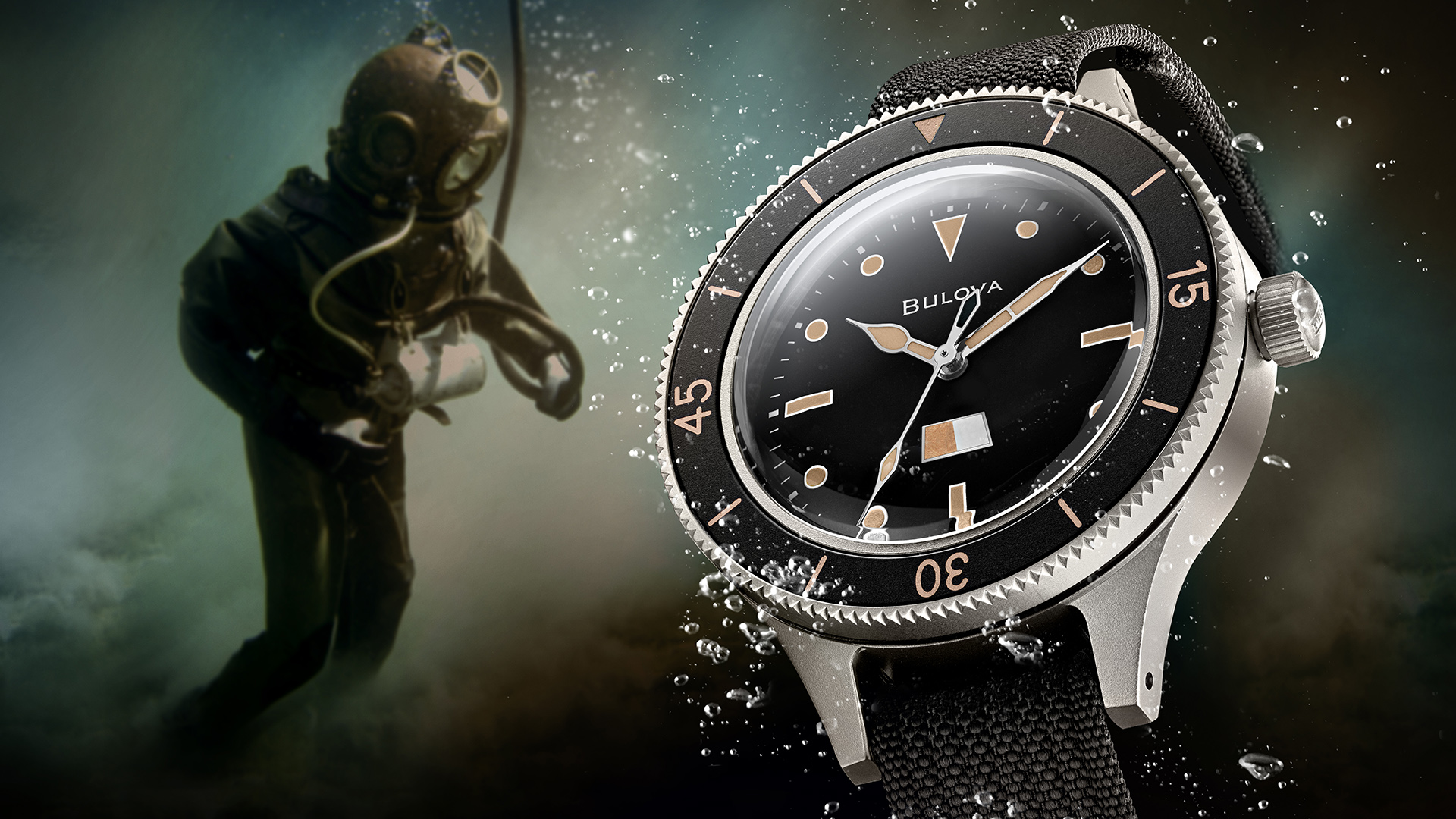 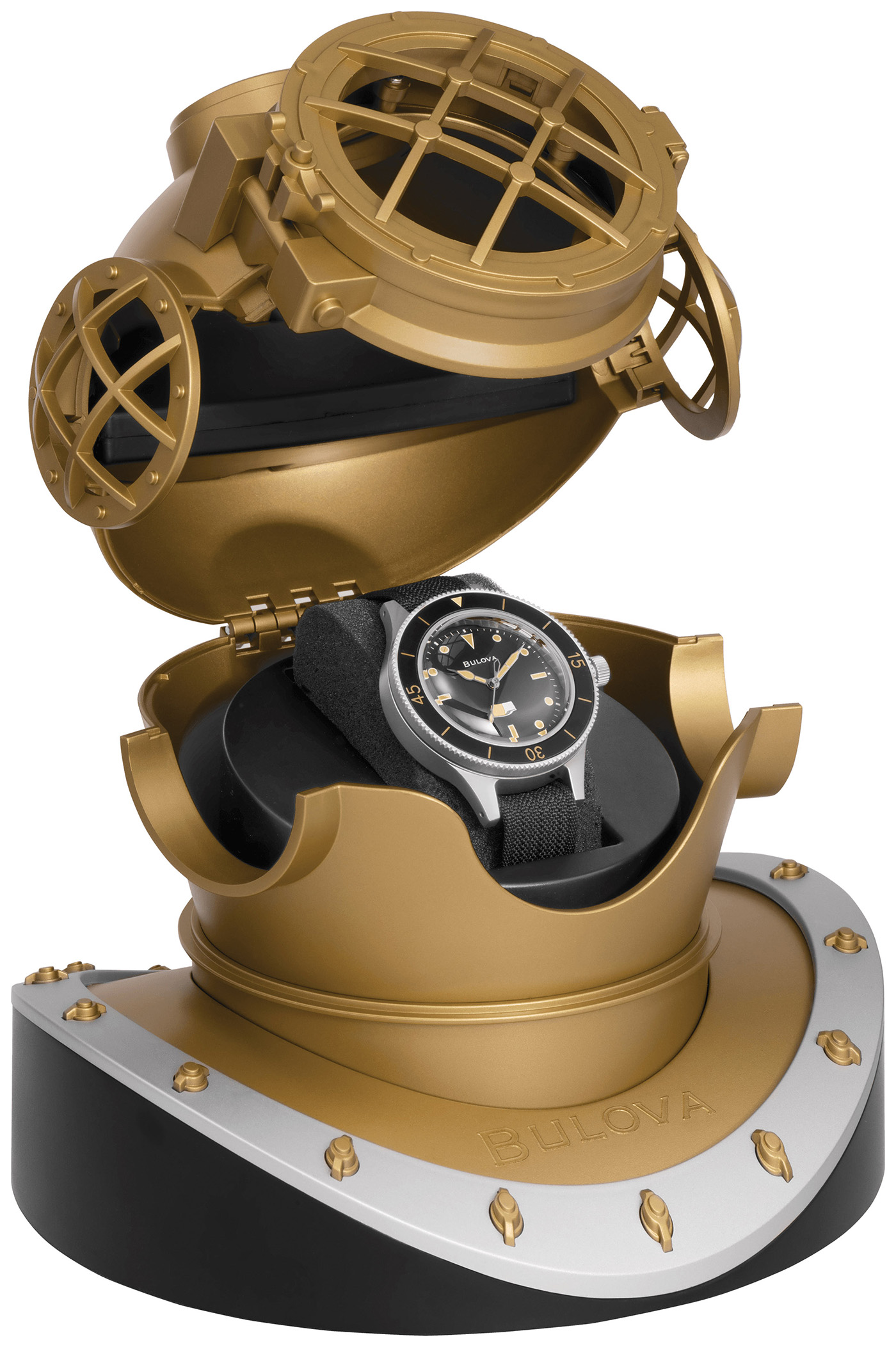 The 1950s were a hotbed of experimentation and development for the dive watch industry. Over the course of the decade, divers moved from a largely experimental, sometimes ad hoc class of designs to the popular, generally established dive watch formula we know today. Although many of the diver designs established in the ‘50s by the likes of Rolex, Blancpain, and Zodiac are still going strong in the watch industry to this day, many other diver concepts created during this time of rapid evolution never made it out of the decade. One of the most powerful drivers of innovation in the dive watch space at the time was the military, with navies around the world greatly expanding the role of diving personnel both in and out of combat post-World War II. Bulova was one of several companies contracted by the U.S. Navy during this time to develop a dive watch to fit the needs of its new Explosive Ordnance Divers and Underwater Demolition Team, delivering six prototypes of its new concept for naval testing in May 1957. Although Bulova’s MIL-SHIPS-W-2181 diver prototypes performed well in testing, earning the interest of experimental divers and performing in depth tests up to 392 feet, the Navy eventually passed on the project and Bulova’s prototypes were left in obscurity for decades. The new Bulova Mil-Ships diver makes this unique piece of dive watch history available to the public for the first time, offering a charismatically offbeat take on the classic military dive watch with a pair of capable movement options.

Bulova keeps the stainless steel case of the Mil-Ships extremely faithful to the 1957 original. Nearly element from the massive-for-1957 41mm diameter, to the simple utilitarian bead blasted finish, and the unguarded pillbox crown is shared with the ‘50s prototype, along with some of its more unorthodox design choices. The tapering unchamfered lugs have a lug-to-lug width of only 16mm, giving the case of the Mil-Ships a distinctive pinched appearance when viewed from above. While many dive watches sport domed crystals, the extreme bubble-like double domed curve of the sapphire crystal adds to the unique look here and introduces a sense of curvature to the otherwise tall and slab-sided design. The other original design touch the Bulova Mil-Ships adds is subtler. Like the ‘50s naval prototype, the notch-toothed dive bezel uses a push-lock system that only turns once pushed down. Both movement options for the Bulova Mil-Ships use an engraved solid caseback with a diving helmet motif. While the overall design is similar, the limited edition Sellita-powered variant offers a much more detailed rendition, adding a sense of intricacy, depth, and texture in images beyond the simple surface engraving of the Miyota-powered model. Both variants offer a dive-ready water resistance of 200 meters. 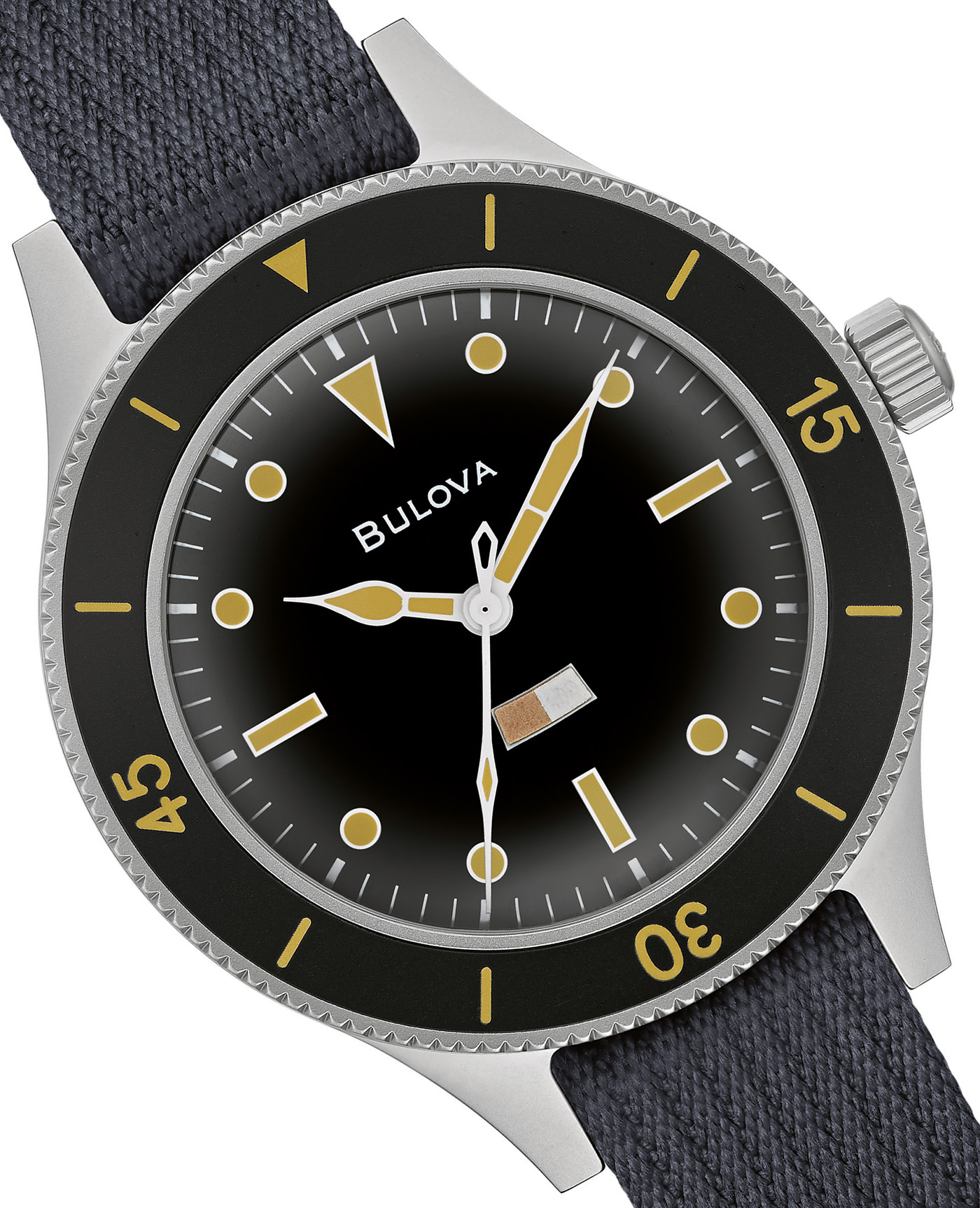 Like the case, the dial of the Bulova Mil-Ships is a remarkably faithful rendition of the original model. The no-date design is elementally simple, with no dial text beyond the vintage-style printed Bulova logo at 12 o’clock and clean printed diver-style indices. The pointed semi-cathedral handset and the khaki fauxtina lume fill add a sense of vintage charm to the design in images, but by far the most unique element is the water resistance indicator at 6 o’clock. This two-tone patch was a recurring feature in military divers of the period, using a small strip of litmus paper which would change color instantly if moisture entered the case. This simple paper solution is both evocative and effective, visually tying this Bulova design to many of its more famous contemporaries and providing an alert at a glance if the case is compromised. Other than a small “Swiss Made” emblem in the 6 o’clock seconds track on the Sellita-powered model, the two movement variants have identical dials. 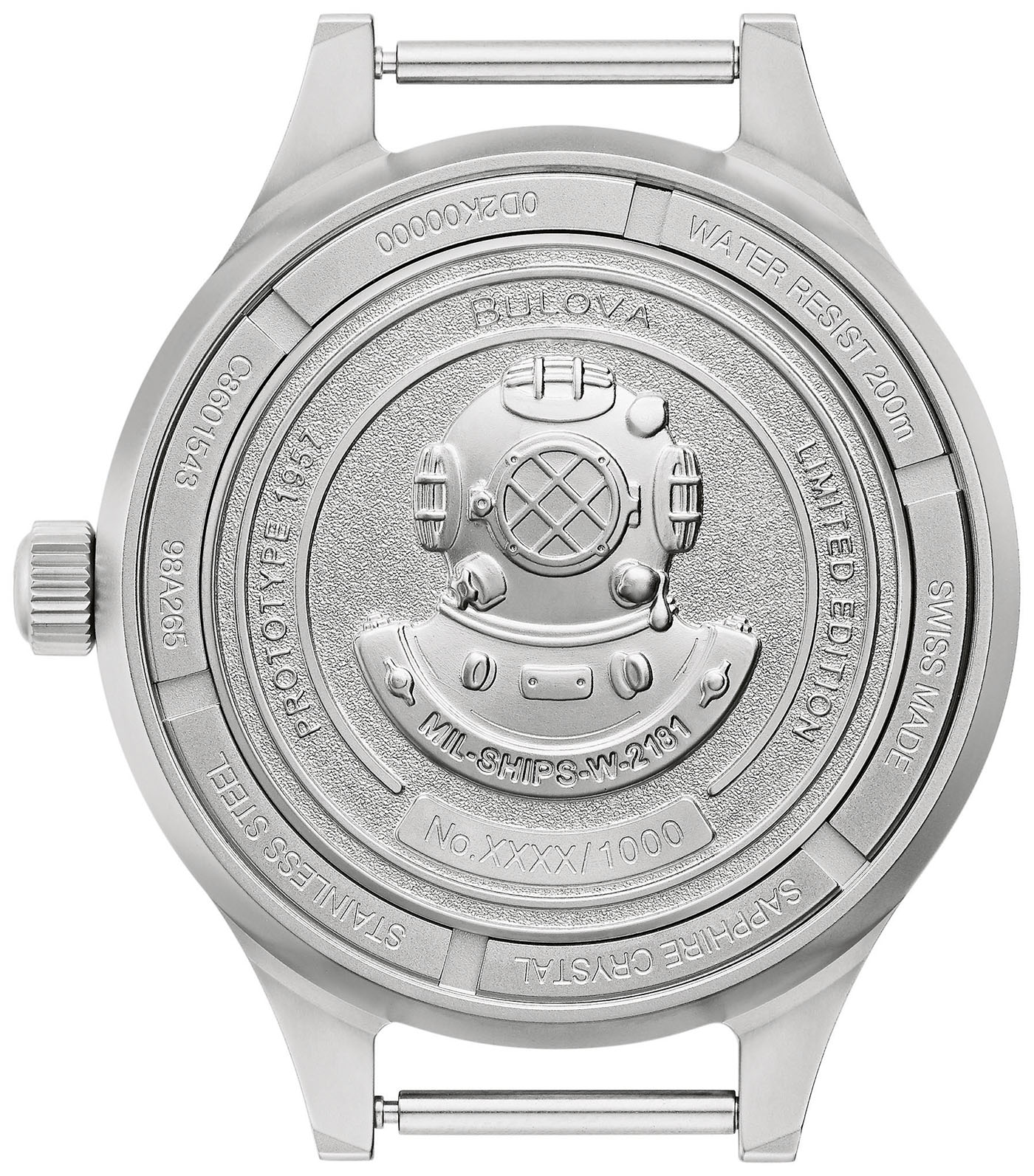 Bulova offers the Mil-Ships with a pair of automatic movement options. For the higher-end limited edition model, the brand uses the tried and true Sellita SW200 automatic, with a slightly low power reserve of 38 hours at a 28,800 bph beat rate. The standard production variant instead uses the Miyota 82S0 automatic produced by Bulova’s parent company Citizen Group. The 82S0 offers a slower, more authentically vintage 21,600 bph beat rate than its Swiss counterpart, but provides a slightly more robust 42 hour power reserve. Both versions of the Bulova Mil-Ships are paired with a unique woven nylon NATO strap to complete the vintage military look. The Sellita-powered version opts to render this strap in pure black, while the Miyota-powered model instead uses a deep midnight blue. 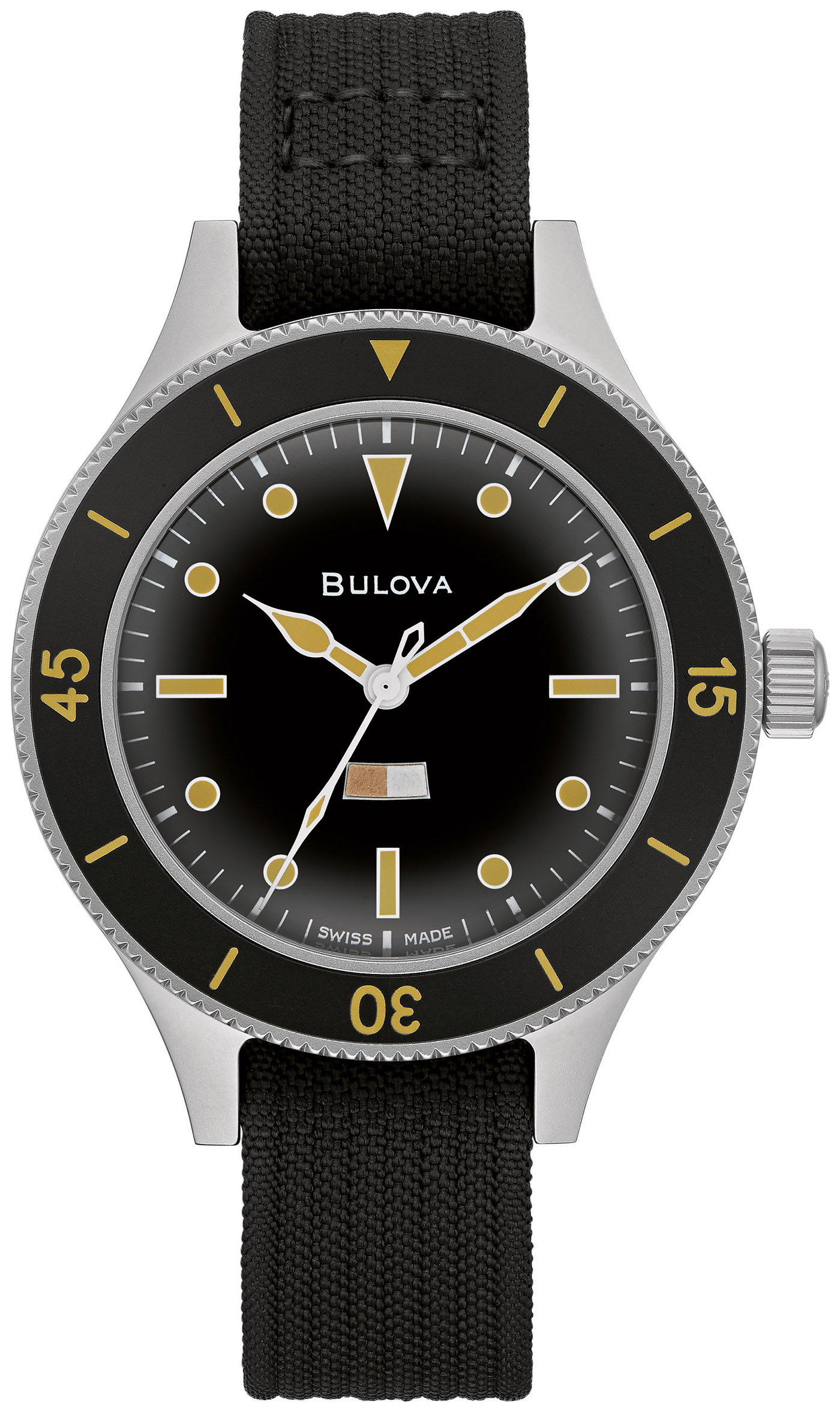 By keeping to the unique and unorthodox character of its original ’50s prototype, the Bulova Mil-Ships offers one of the most distinctive and interesting takes on the current vintage military diver craze while opening the style up to a more accessible price point. The Sellita-powered version of the Bulova Mil-Ships is limited to only 1,000 examples, and also includes a stylized gold tone dive helmet-shaped watch box, a commemorative book, and a plaque. Both versions of the Bulova Mil-Ships are available now through authorized dealers. The standard Miyota-powered model carries an MSRP of $895, and the limited edition Sellita-powered version retails for $1,990. For more information, please visit the brand’s website.