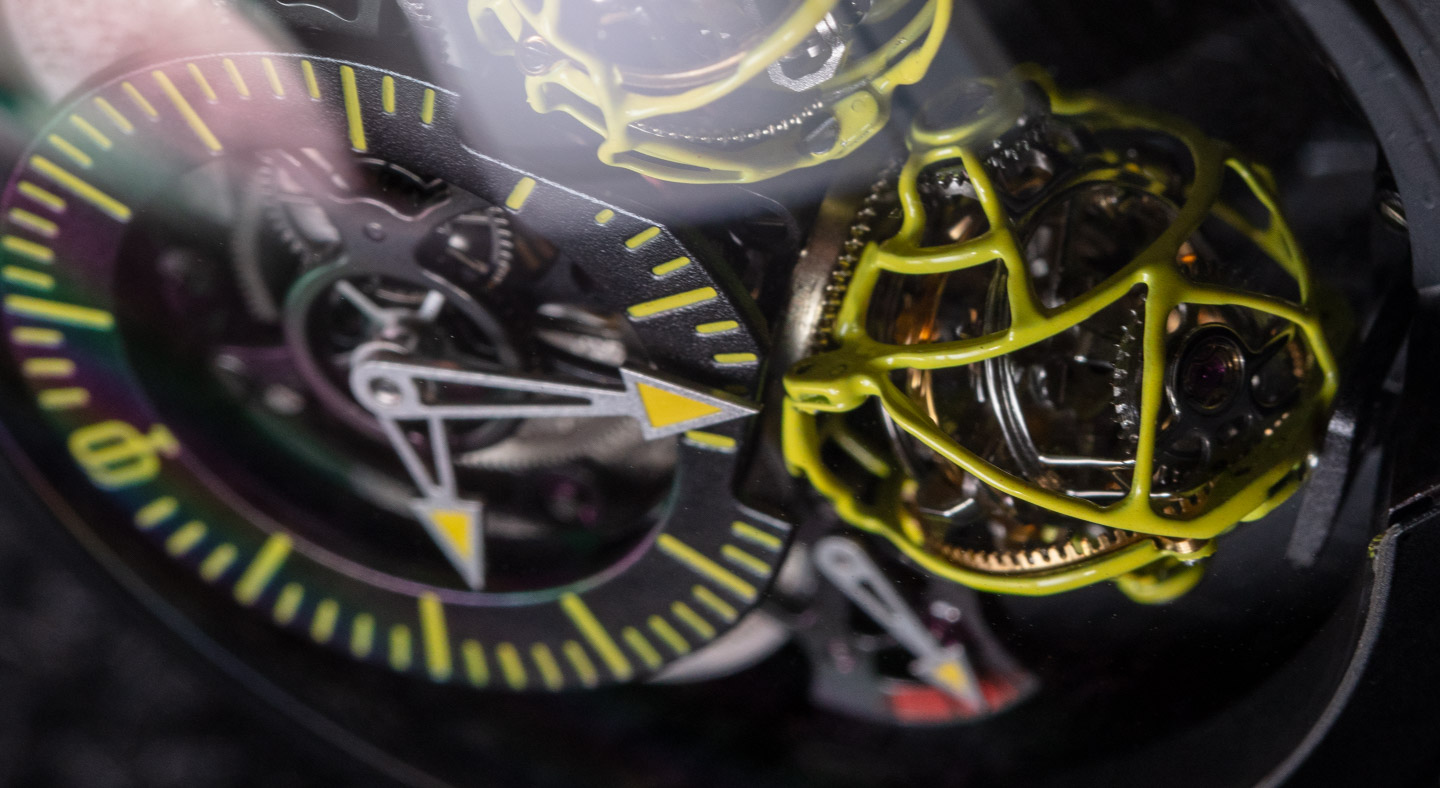 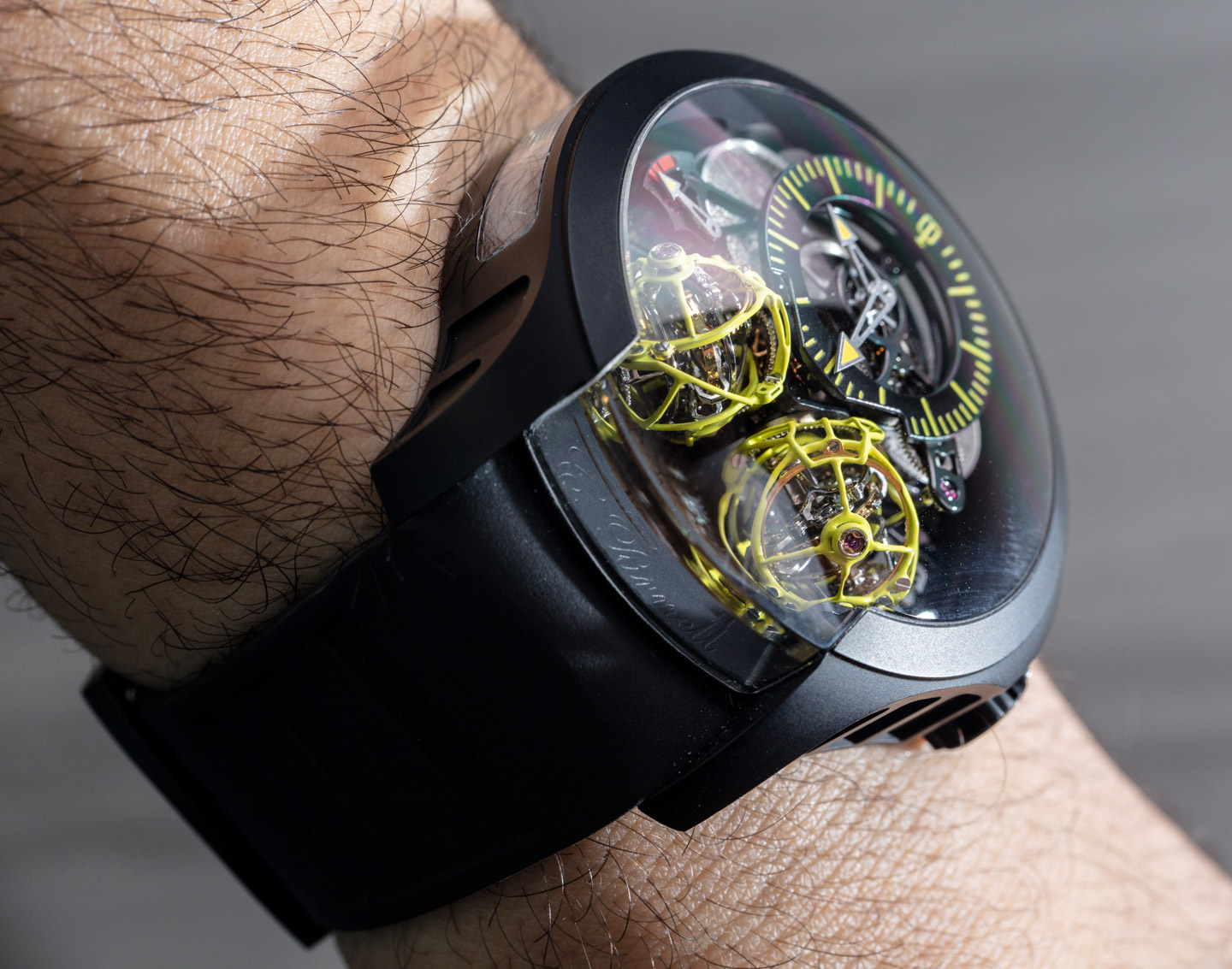 It has been a while since I’ve had some time to play with a Cecil Purnell watch. The brand was started by Jon Purnell as a sort of fun vanity project as his money came from other enterprises — with a name that honored his watchmaker ancestor. The Cecil Purnell brand has always had the aim of making wild-looking, mechanically competent watches in small numbers for decisive, wealthy customers. That has always allowed the brand to invest in making highly original watches in low quantities because the retail price for each is so high.

The most recent show-stopper watch is the simply named Escape II, which features the Eric Coudray-designed “Double Spherion” system. This is the same person who developed some of the watches for Cabestan, as well as the Gyrotourbillon for Jaeger-LeCoultre. He can’t use that term because it is owned by Jaeger-LeCoultre, I believe, so he developed a new term called “Spherion” to characterize the evolution of the concept. The Escape II watch includes a movement with two Spherions that operate the reverse of one another thanks to how they are connected. They are also connected to a differential that allows the watch to display a time regulated by the timing average of the two systems. Wearing the system also allows for people to publicly ask an otherwise mostly inappropriate question, “would you like to see my double flying balls?” 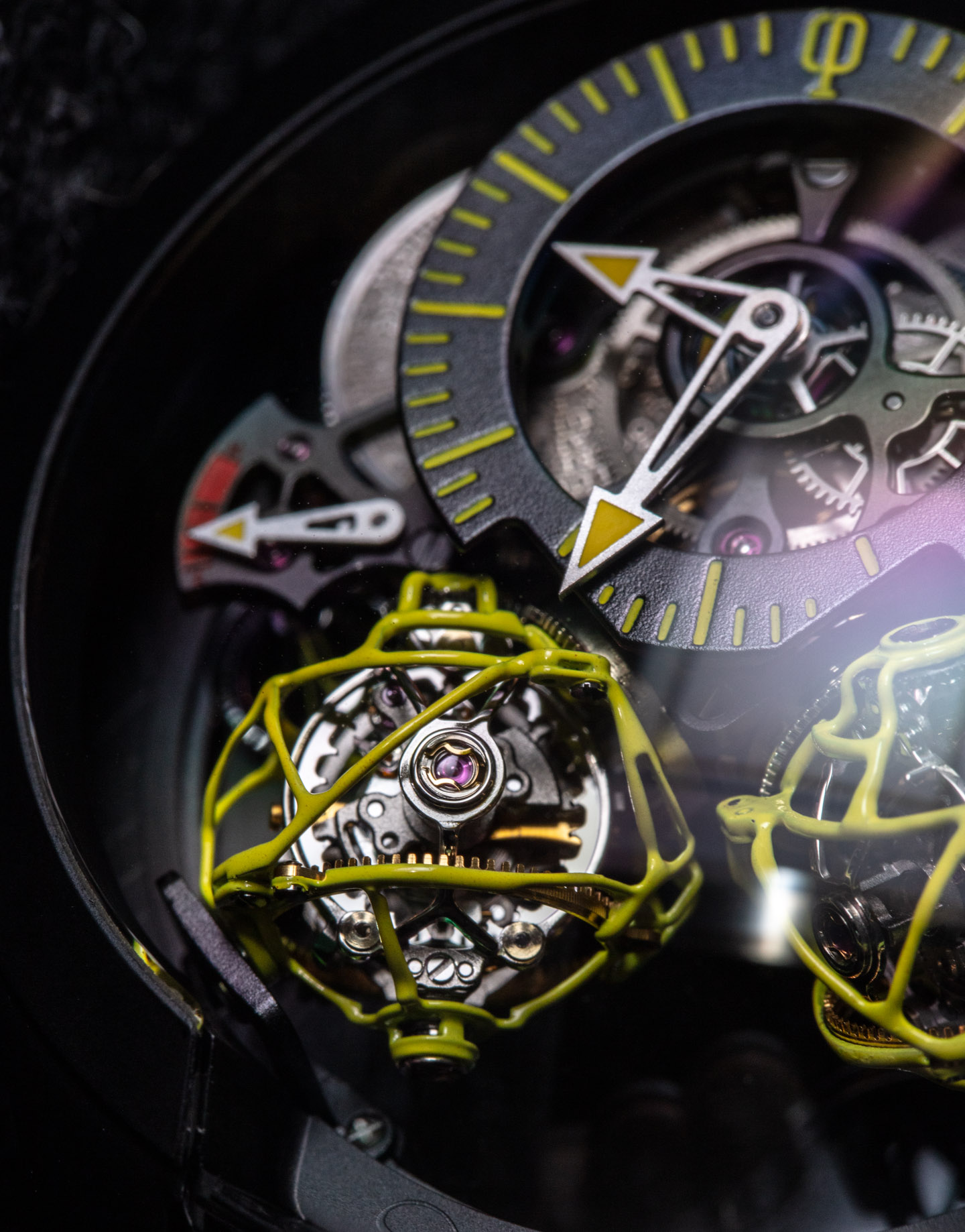 Each of the spherical three-axis tourbillon systems also operates rather quickly at 30 seconds, as opposed to 60 seconds. This isn’t just a gearing trick but also required Coudray to rethink the construction of a “traditional” spherical tourbillon cage since it goes faster and needs more torque for acceleration. This means the movement uses a lot of power and thus needs some hardcore springs. The caliber CP03 manual movement actually has six mainsprings between four barrels (two of them are stuck into two of the barrels), and still only manages to have a power reserve of 32 hours! I’ve literally never worn a watch that is this power-hungry before. For this reason, the case is on the thicker side. The CP03 movement, alone, is thicker than a Rolex Submariner at 13.3mm-thick.

The CP03 movement is produced from 386 parts and operates at 3Hz. The dial displays the hours and minutes, along with a power-reserve indicator (that you’ll need) and the double spherion display. Have no doubt, the entire intellectual exercise the Double Spherion Escape II watch is meant to be involves making something cool-looking. There is no serious intention to improve horology or innovate the industry. This is simply what happens when you need to convince stubborn collectors that there is something wild and new (and that if they can afford it, they suddenly can’t live without it). 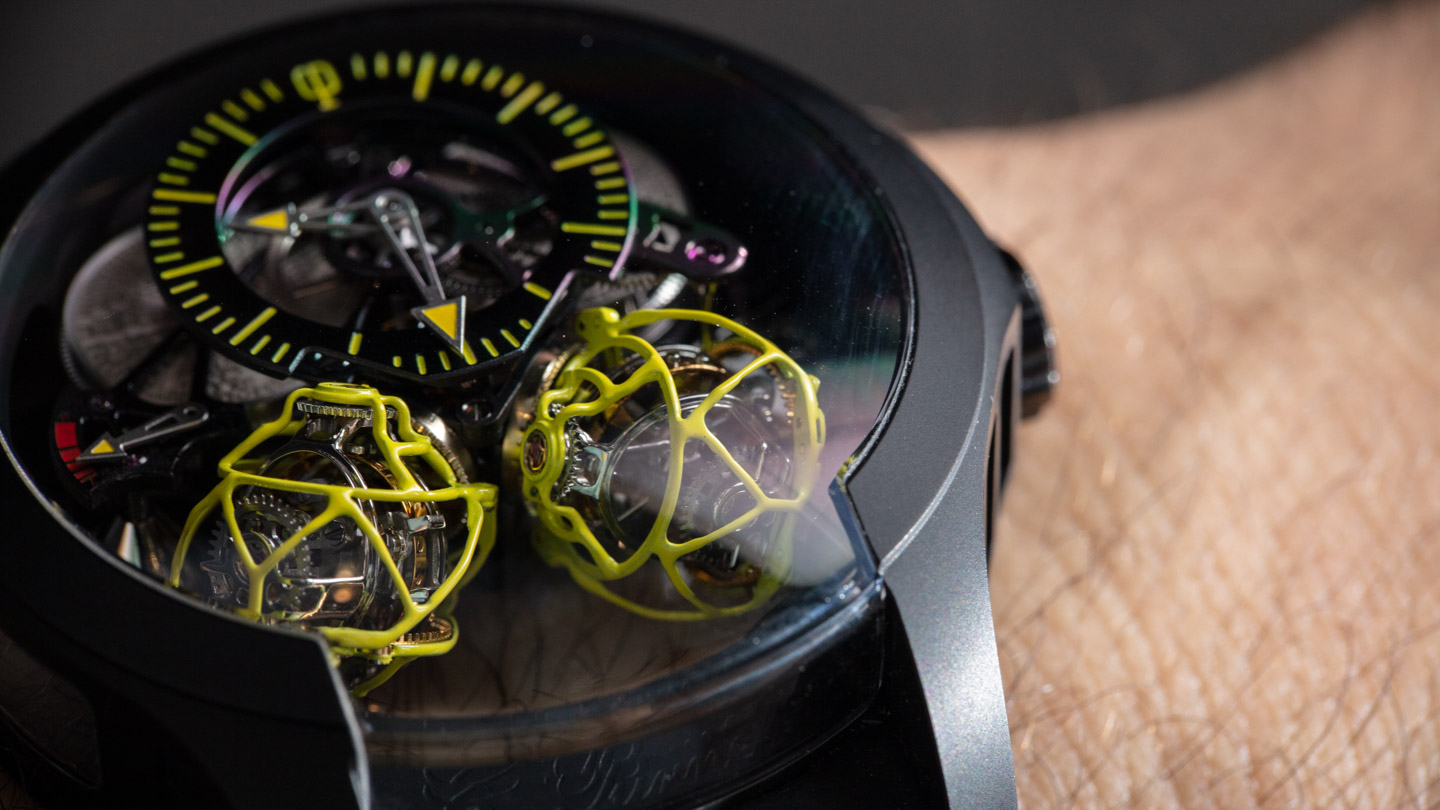 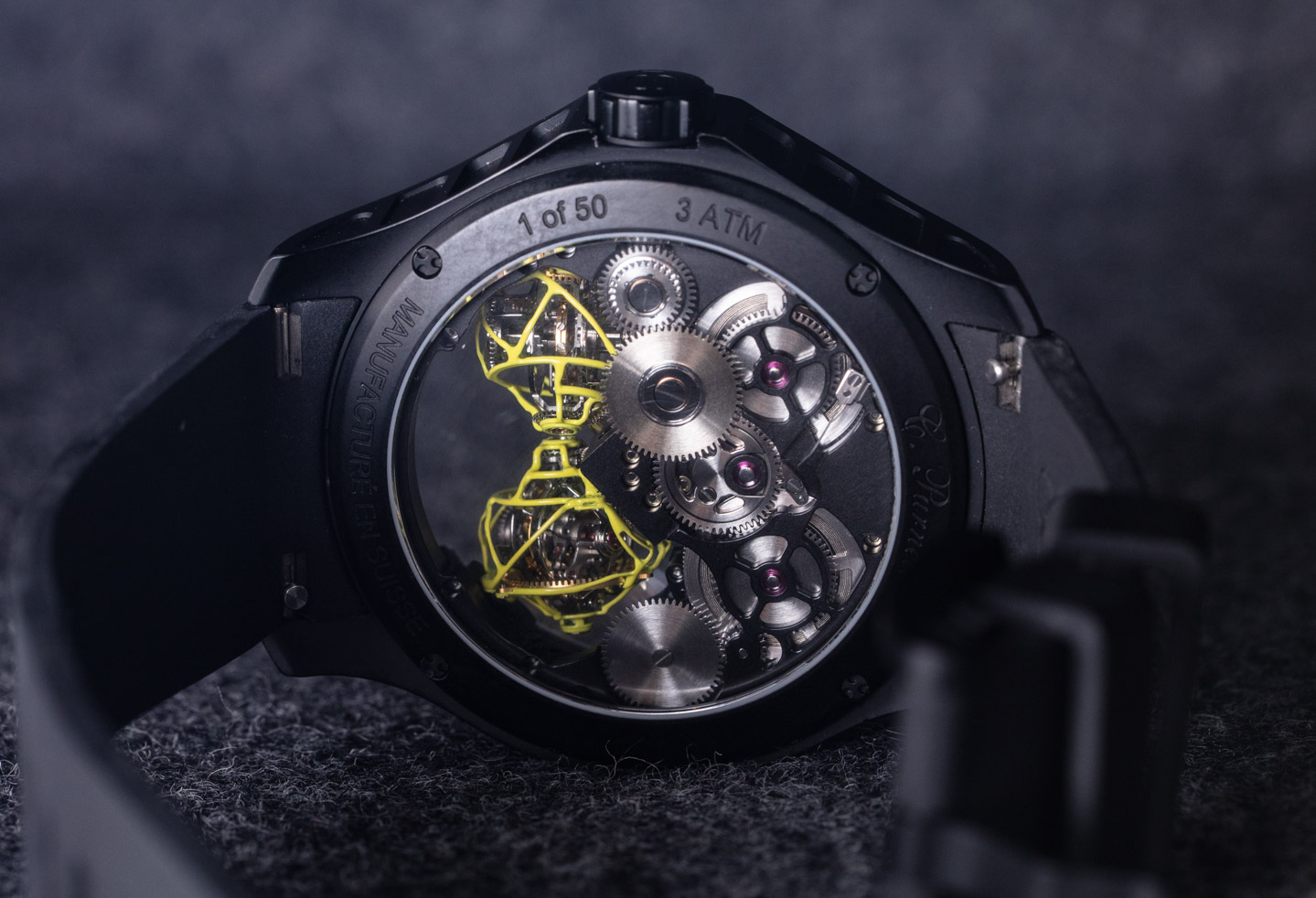 Accordingly, Eric Coudray and Cecil Purnell have succeeded. The Escape II isn’t going to be everyone’s cup of tea, but it is a genuinely awesome-to-behold creation that has no precise equal. Coudray — a fan of heavy metal and heavy facial hear — is skilled in how to make jumping springs and wheels that impress an audience. Purnell then just needed to build a stage around the metal show that Coudray is putting on for the watch fan looking at it.

For that reason, I am sure Coudray was particularly happy about the sapphire crystal that extends into the sides of the case, offering a better view of the movement. The case itself in this form is in black DLC-coated grade 5 titanium. It is paired with a custom rubber strap and is actually pretty comfy — though it isn’t exactly practical, and it goes best when you are doing something impractical like jetting around in your own lake on your 40-foo bullet boat. Then again, the 48mm-wide, 19mm-thick case is only water-resistant to 30 meters (which is fine for splashes — just don’t decide to take a dip). 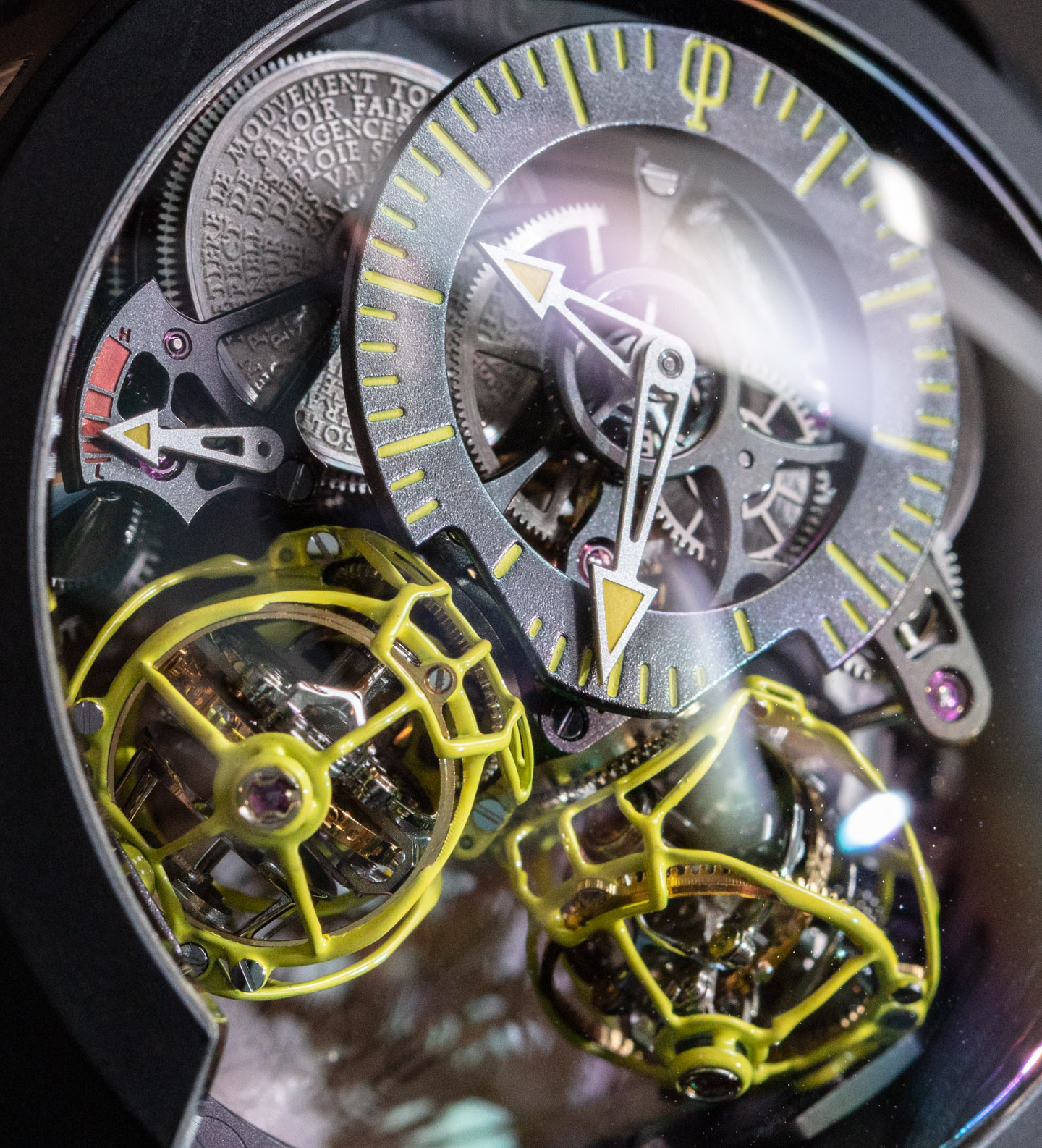 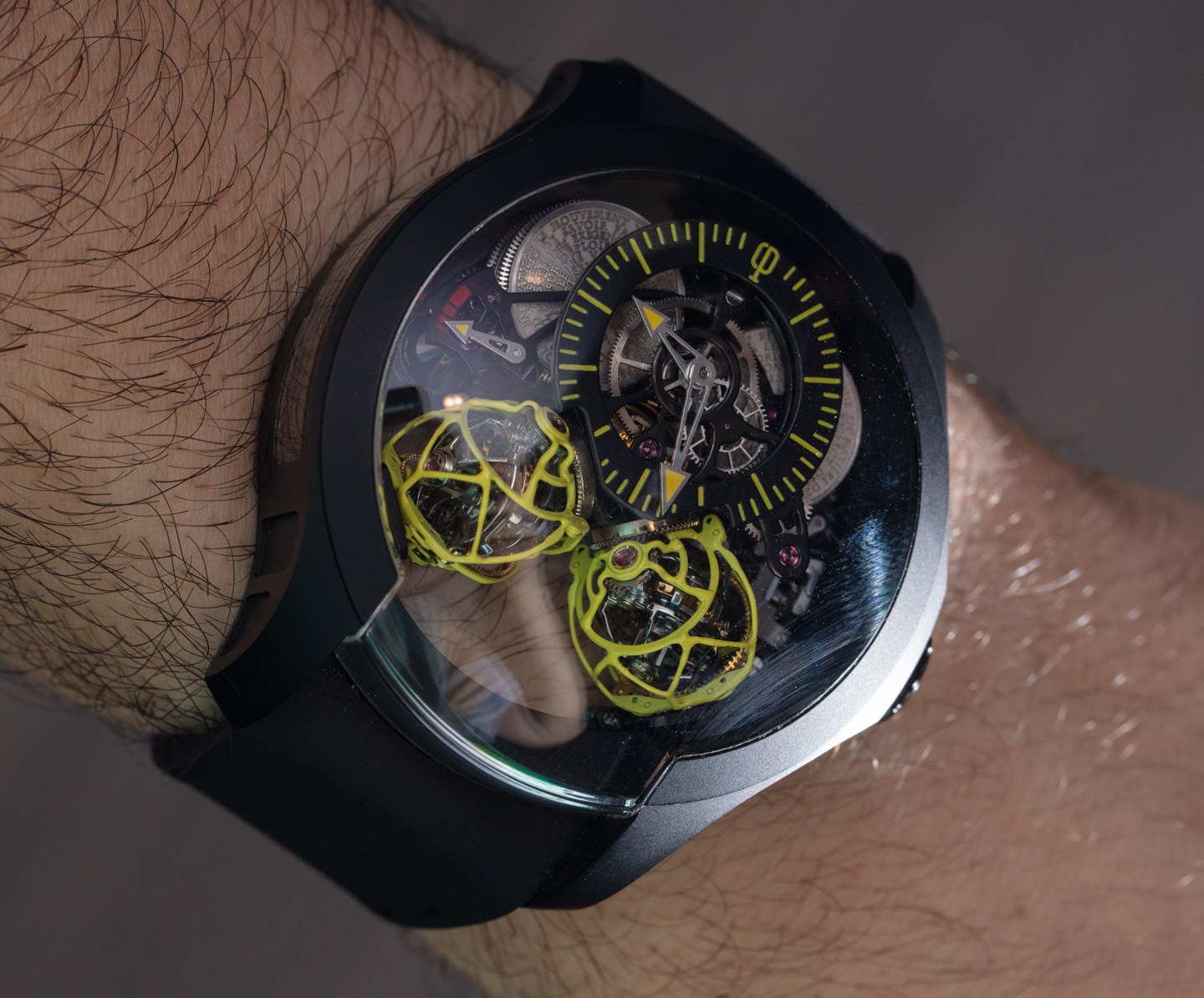 In a lot of ways, I appreciate the almost total dedication to modern design in the Cecil Purnell Double Spherion Escape II watch. Almost nothing about it hearkens back to watchmaking tradition, even though it is built and designed by traditional watchmakers. It might not achieve the immediate grace of a Ferrari, but it will put a smile on your face like a pickup truck that someone managed to cram $350,000 worth of upgrades into. Limited to 50 pieces in this style, the Cecil Purnell Double Spherion Escape II watch has a price of $425,000 USD. Learn more at the Cecil Purnell website here.