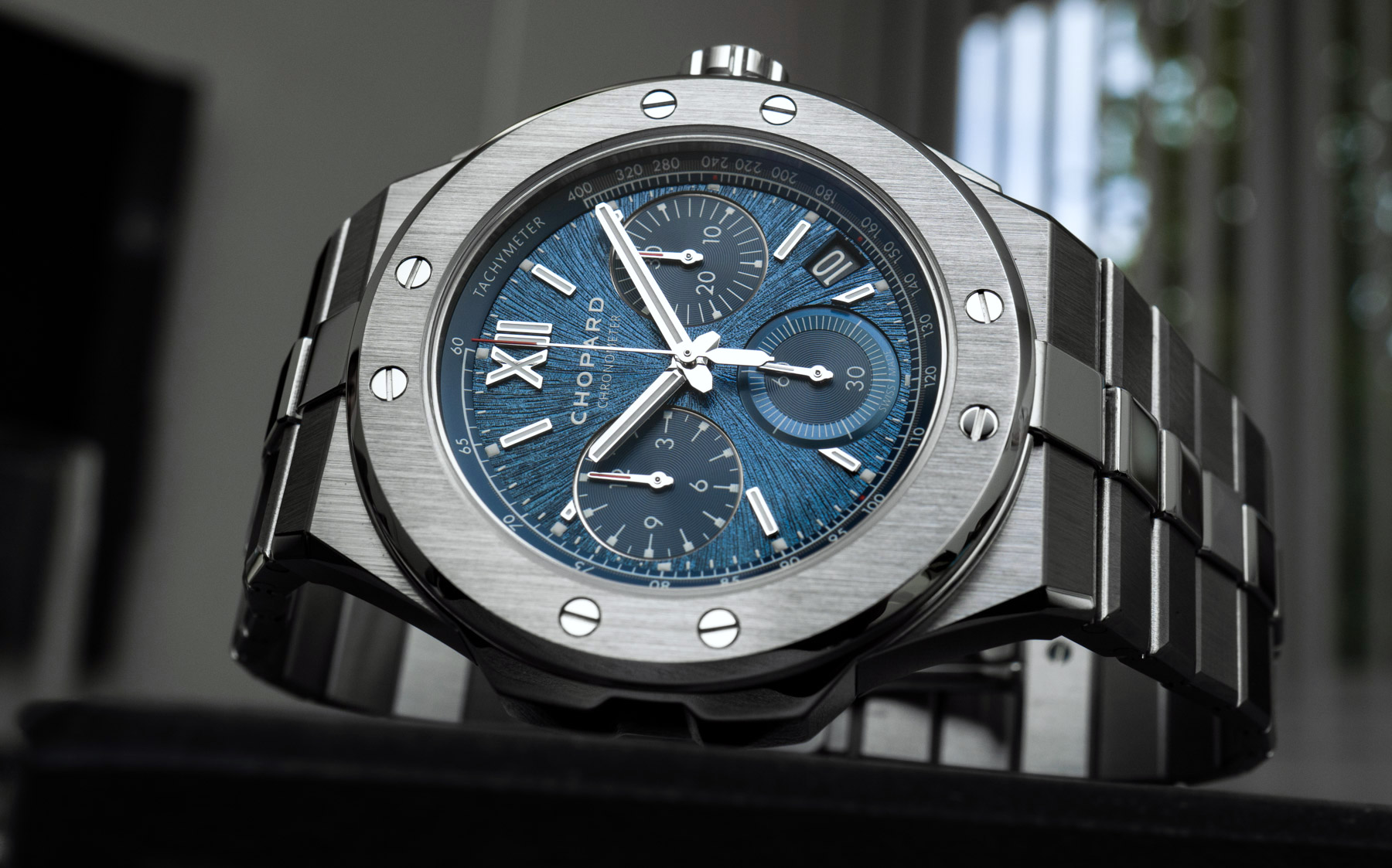 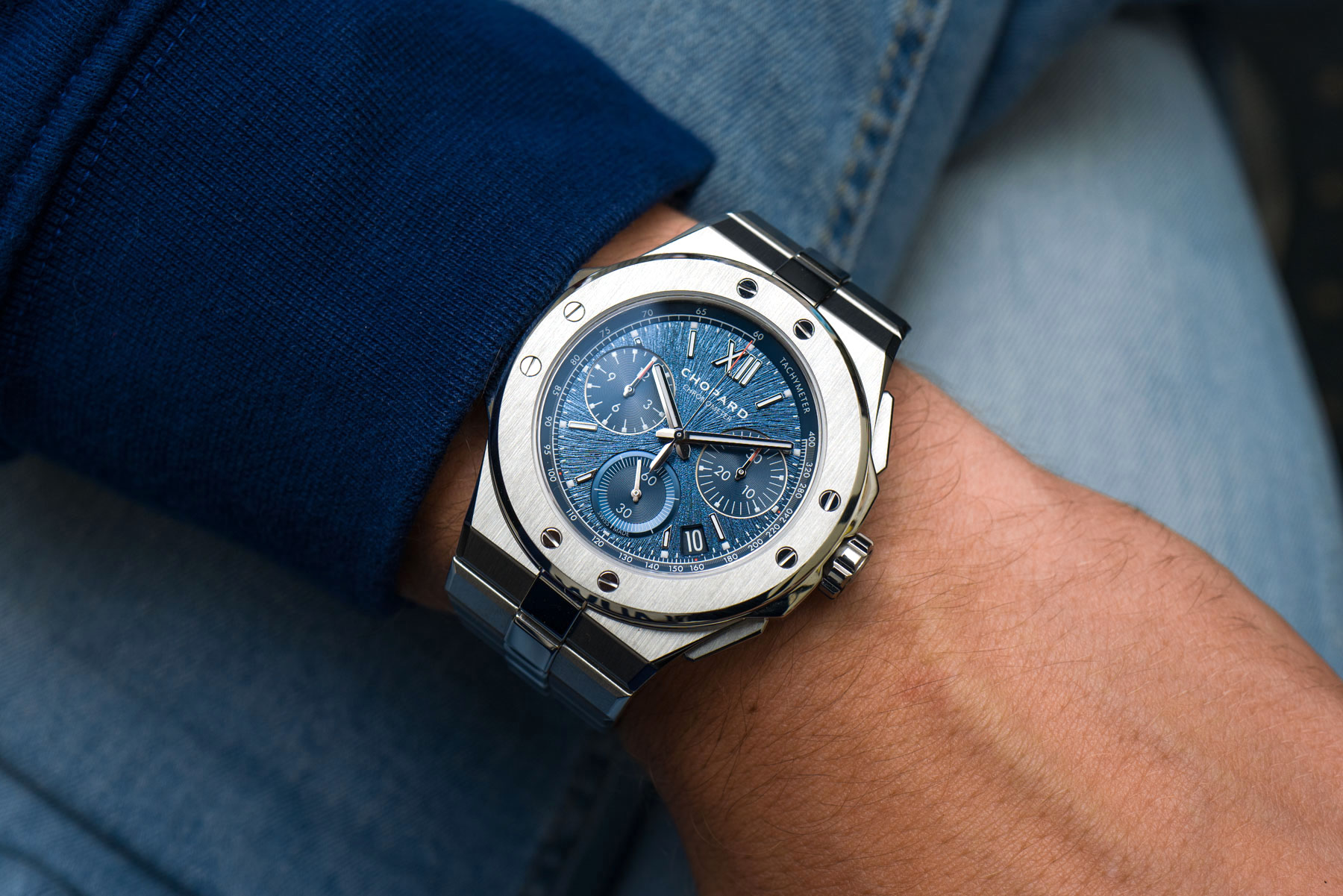 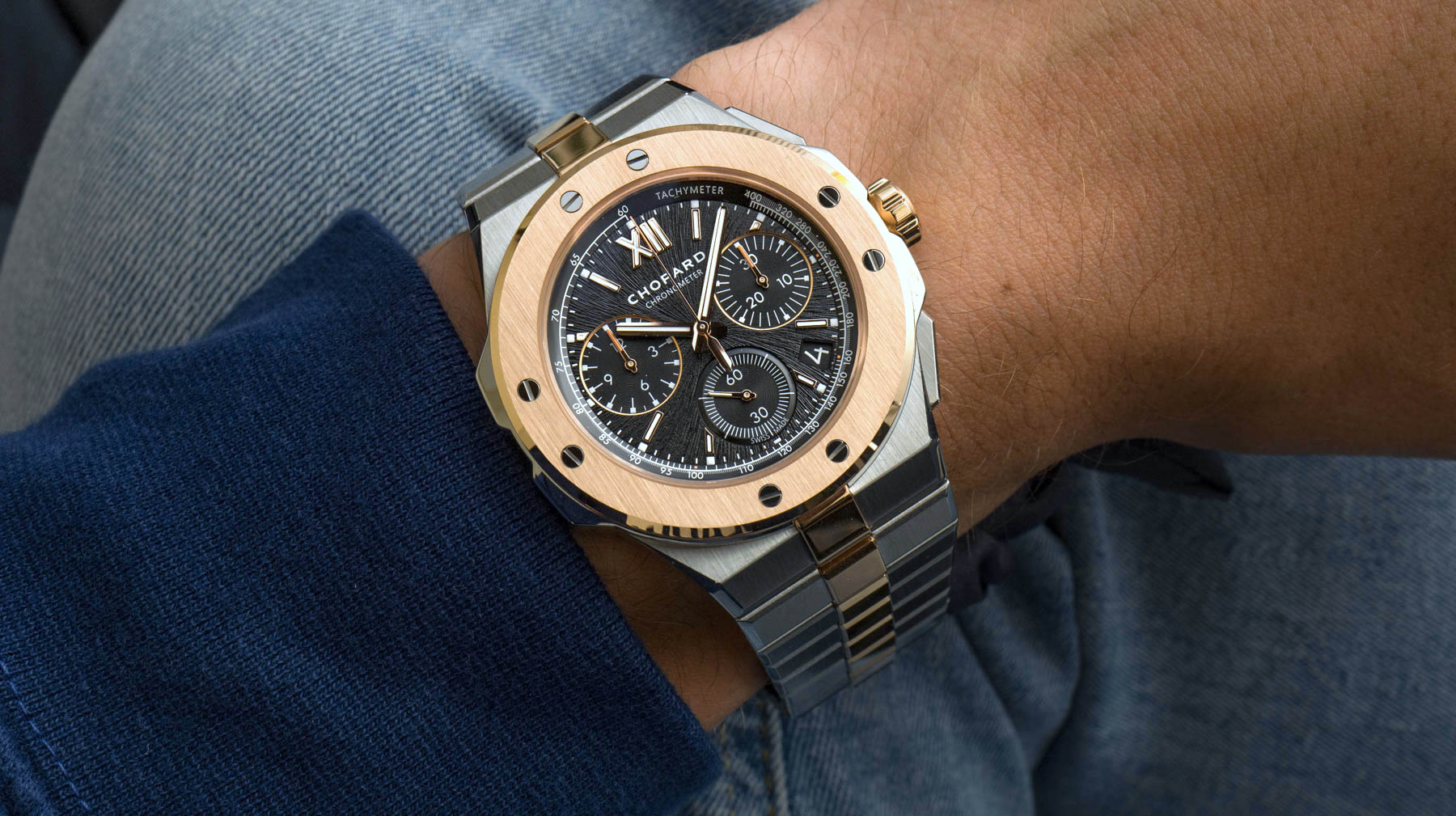 From day one, the case and bracelet finishing of the Alpine Eagle has been easily on par with the waiting list champions such as the Patek Philippe Nautilus and Audemars Piguet Royal Oak… And that’s before we mentioned the genuinely incredible Lucent Steel A223 that Chopard developed to help its newbie pack one unexpected punch right upon entering this arena of bare-fisted steel luxuriousness. 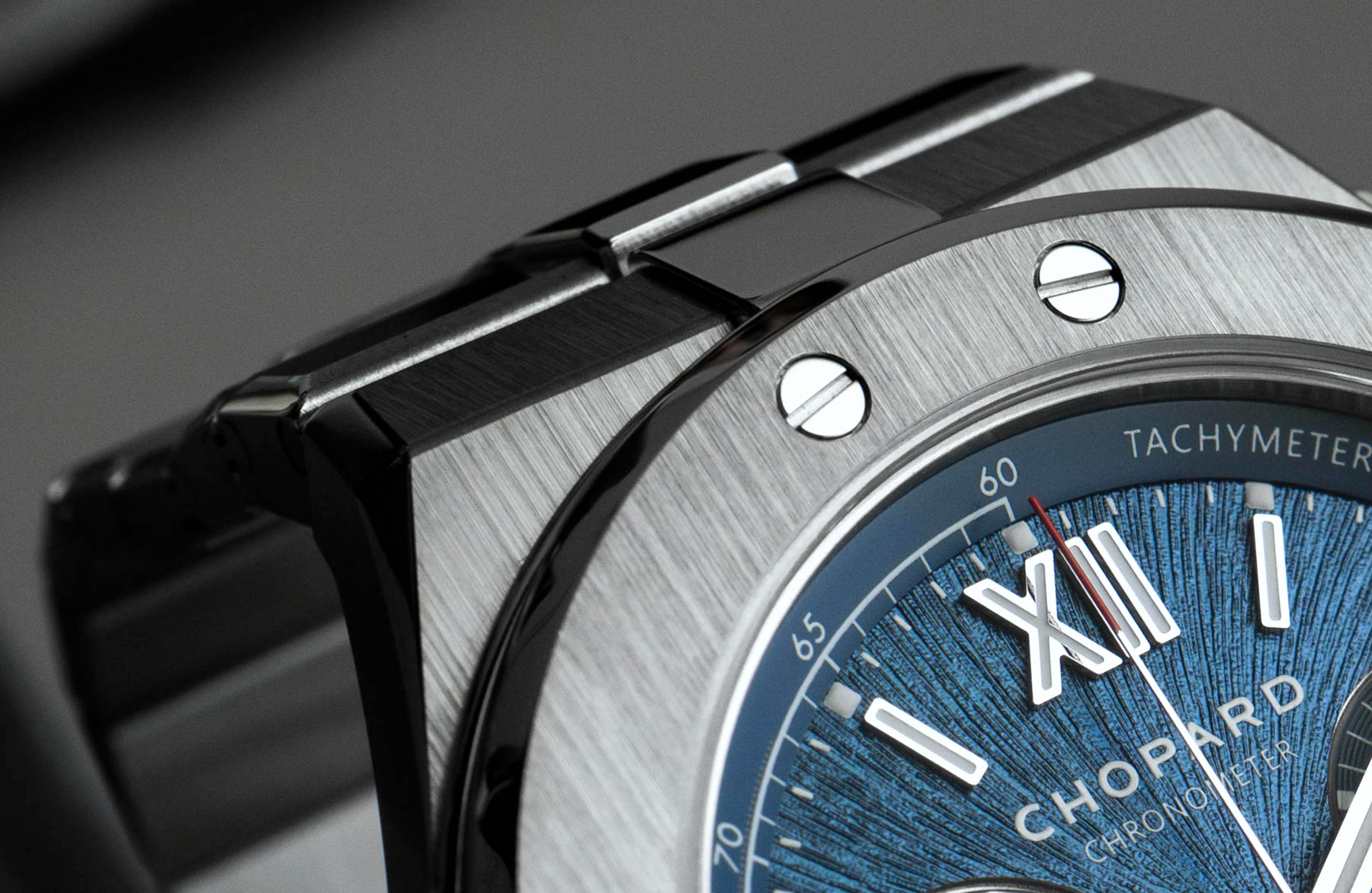 It is extremely rare that I fear hands-on images and a paragraph or two won’t do ample justice to the finishing of a watch, but the Alpine Eagle is still so new and, therefore, still so rare to be seen in the wild (especially given how things have unfolded in 2020), that I feel Chopard’s engineers, watchmakers, and designers deserve our extra effort to get them the credit they earned with their work. 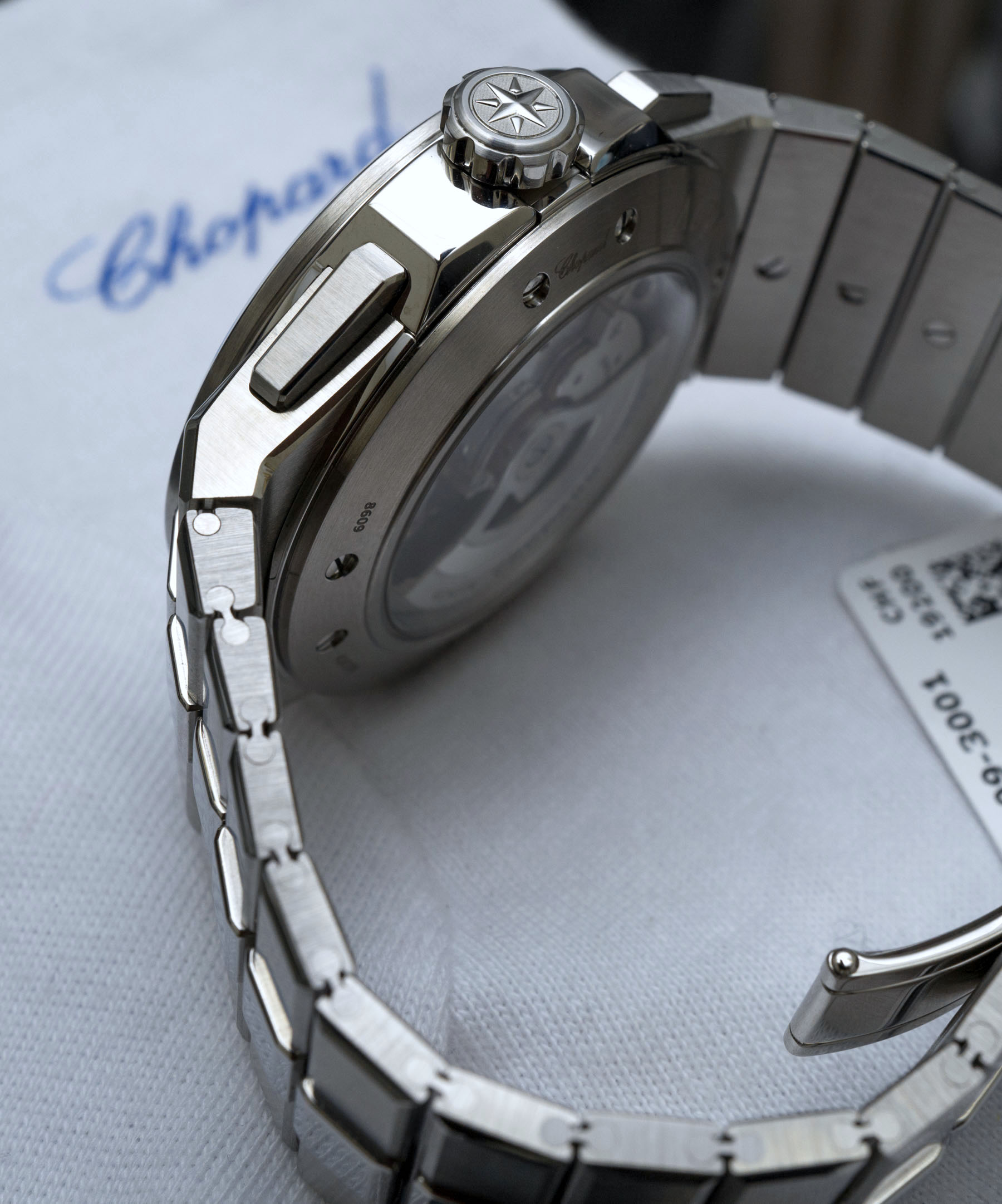 Lucent Steel is the best-looking steel I have ever seen on any watch. It’s so white (as in neutral in its color that only changes if it reflects yellow light or colored surfaces), so blindingly bright, and finishes with such apparent uniformity that it blows every other sub-$20k steel luxury watch right out of the water and gives the rest — like the near-$30k Nautilus one heck of a hard time to justify its extortionate pricing. Grand Seiko’s Zaratsu polishing and AP’s surface treatments are amazing in their own ways, but they simply cannot compete with the brightness and whiteness of Lucent Steel A223. More about the material, pricing, and brand status in the hands-on debut we linked to in the intro. 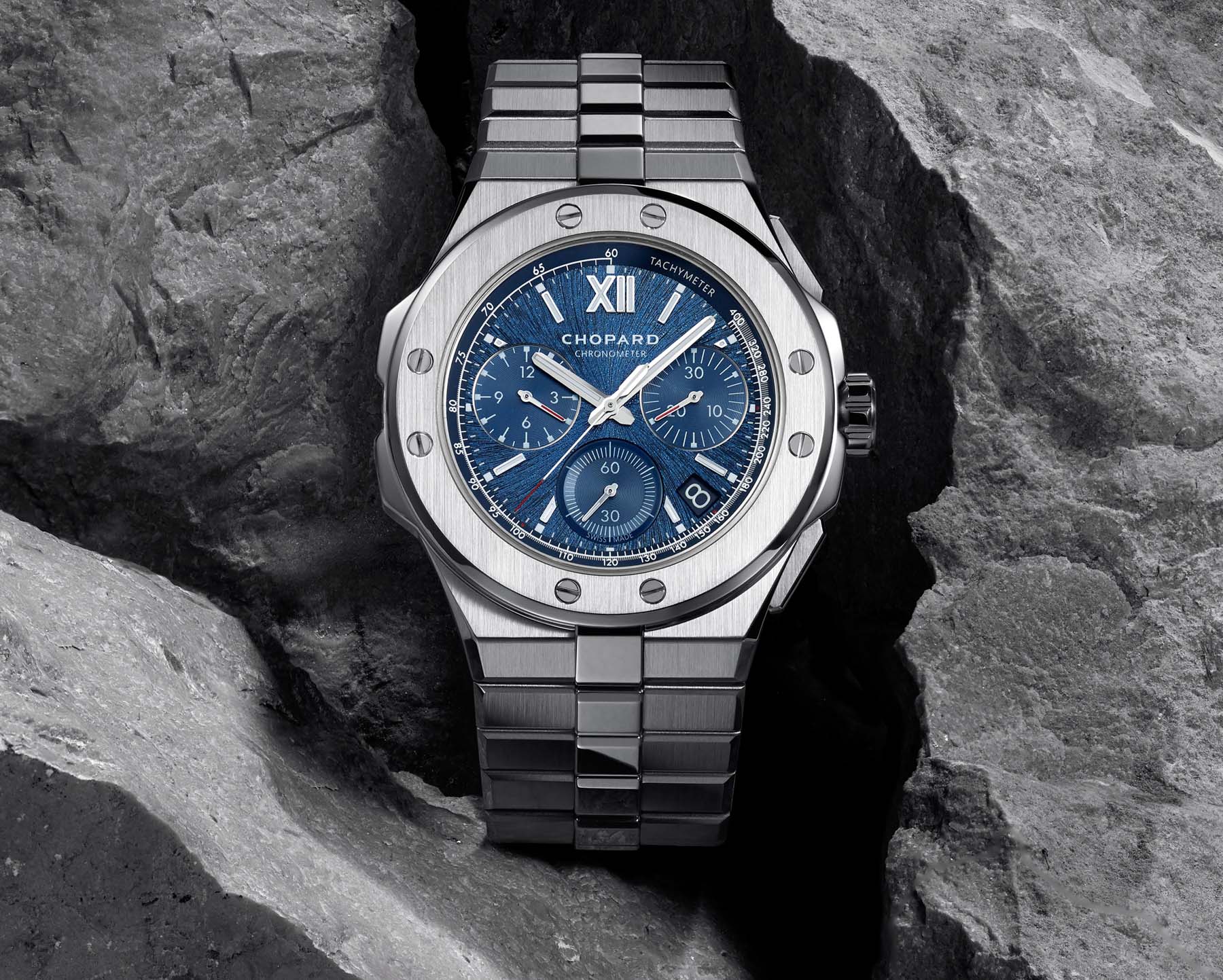 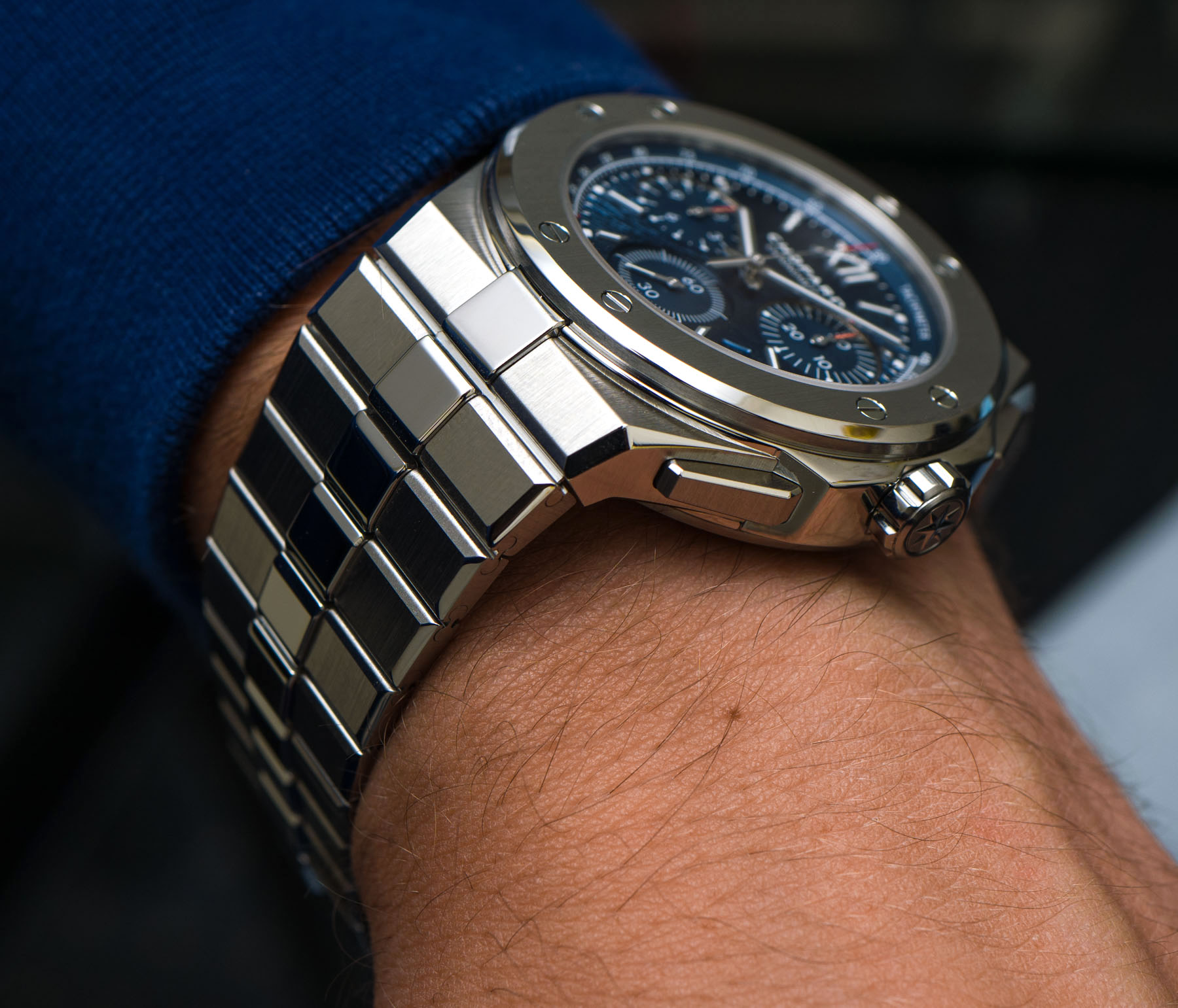 The 44mm-wide and just 13.15mm-thick exterior of the Alpine Eagle XL Chrono performs just the same as did the 41mm and 36mm three-hander variations a year ago. Looking at the hands-on images, you might be able to tell that they are distinctly darker than my regular imagery and yet they still have what photographers call “blown highlights:” areas of the case and bracelet that are so extremely bright they cannot be recovered. No other watch, not in steel, 18k white gold, or 950pt that I ever photographed has ever been quite this bright (and my trusty Nikon D810 has shot its 110,000th image recently so it’s seen plenty of watches). 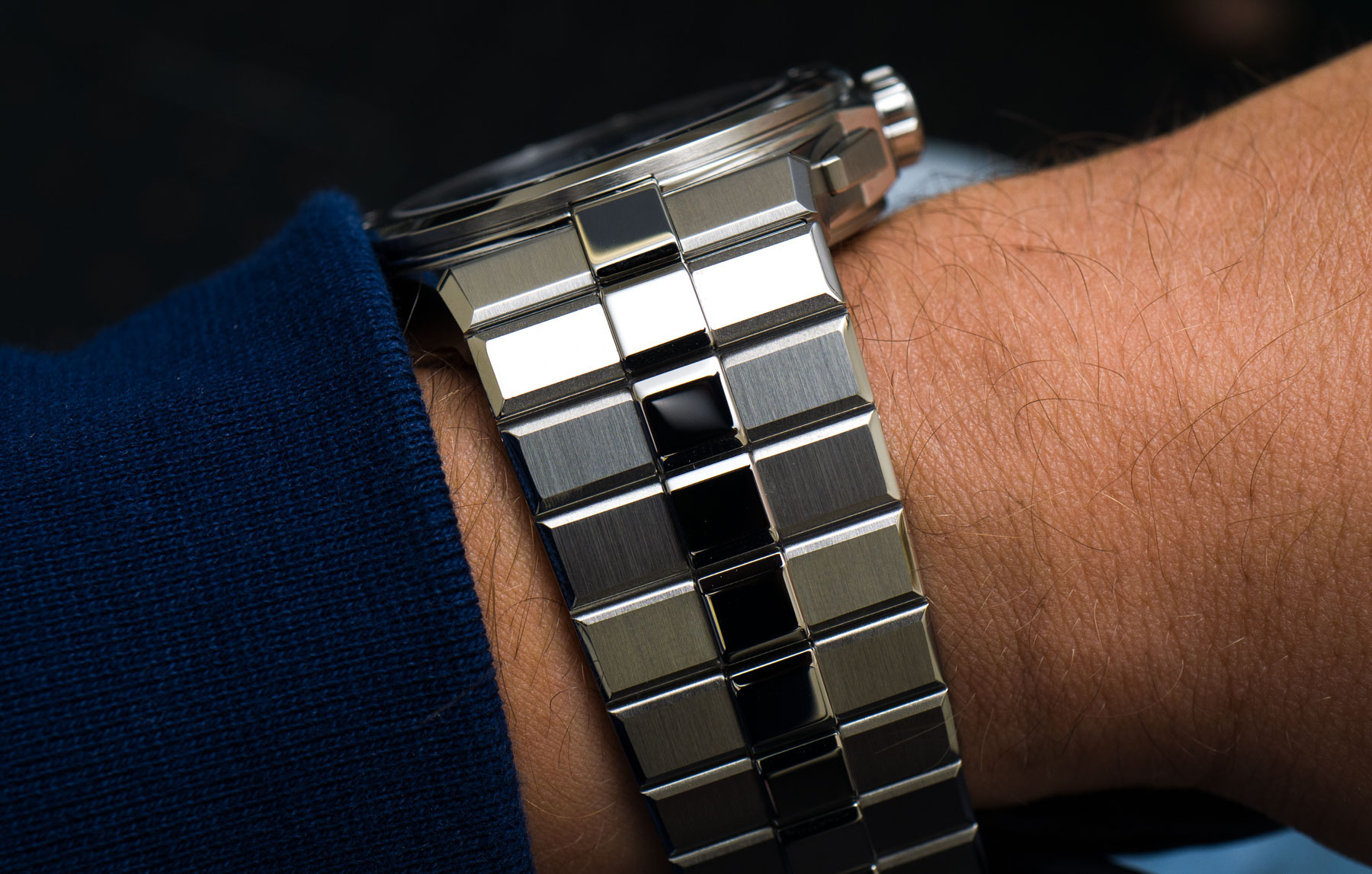 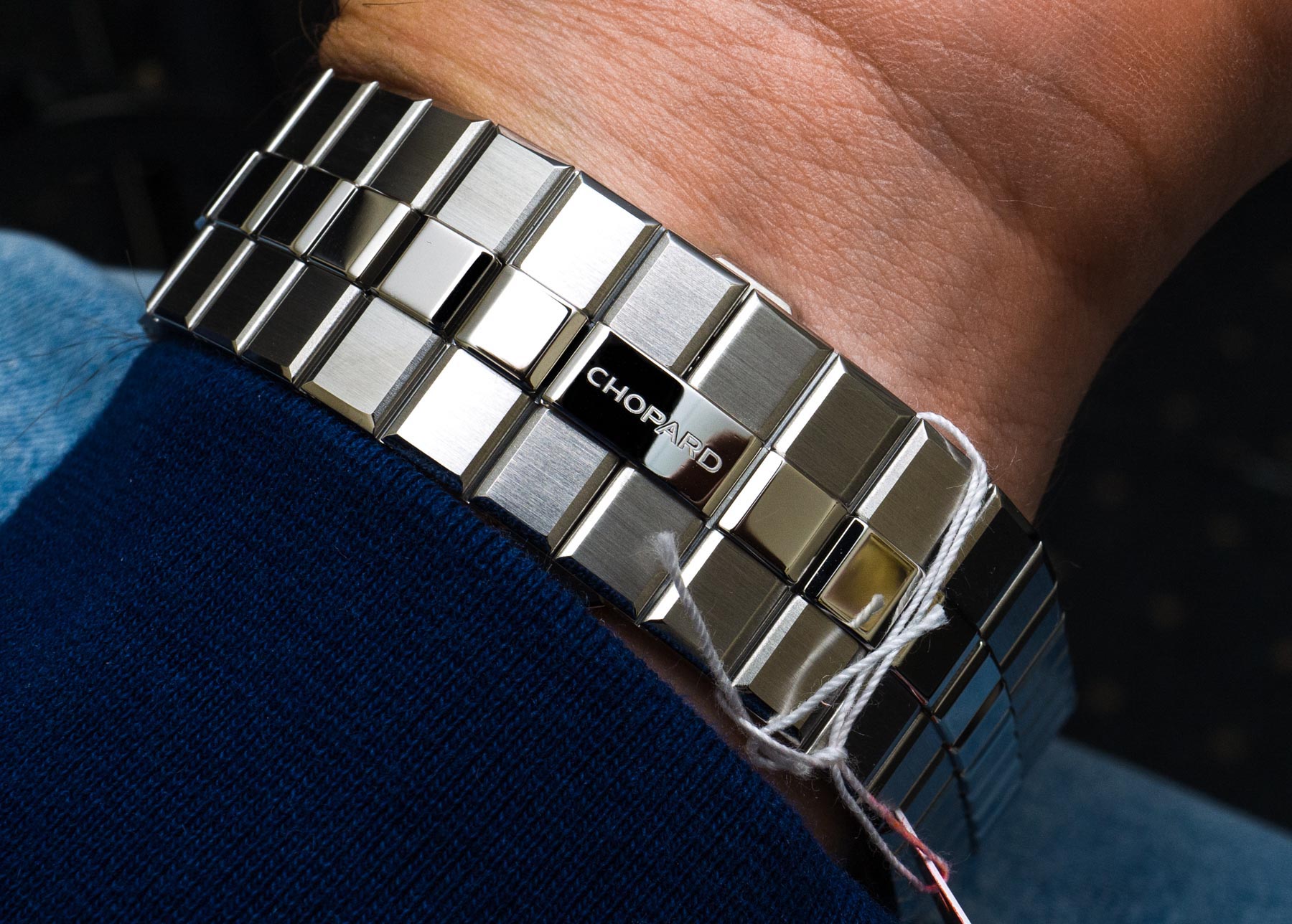 Now, imagine the effect the bracelet gives when you rotate your wrist and its brushed and polished links each take their turn at reflecting the primary light source around you. It is the sort of effect an expensive watch should provide: Sure, it won’t score the coveted Most Discreet Luxury Accessory Award of the year, but then again if you were after that, you probably shouldn’t be looking at all-steel luxury watches in the first place. Nevertheless, this light show doesn’t look chintzy or tasteless, on the contrary: it gives the impression of one beautifully and delicately crafted object — which all five-figure-priced watches damn well should do, and yet many of them don’t even try to do on this level. 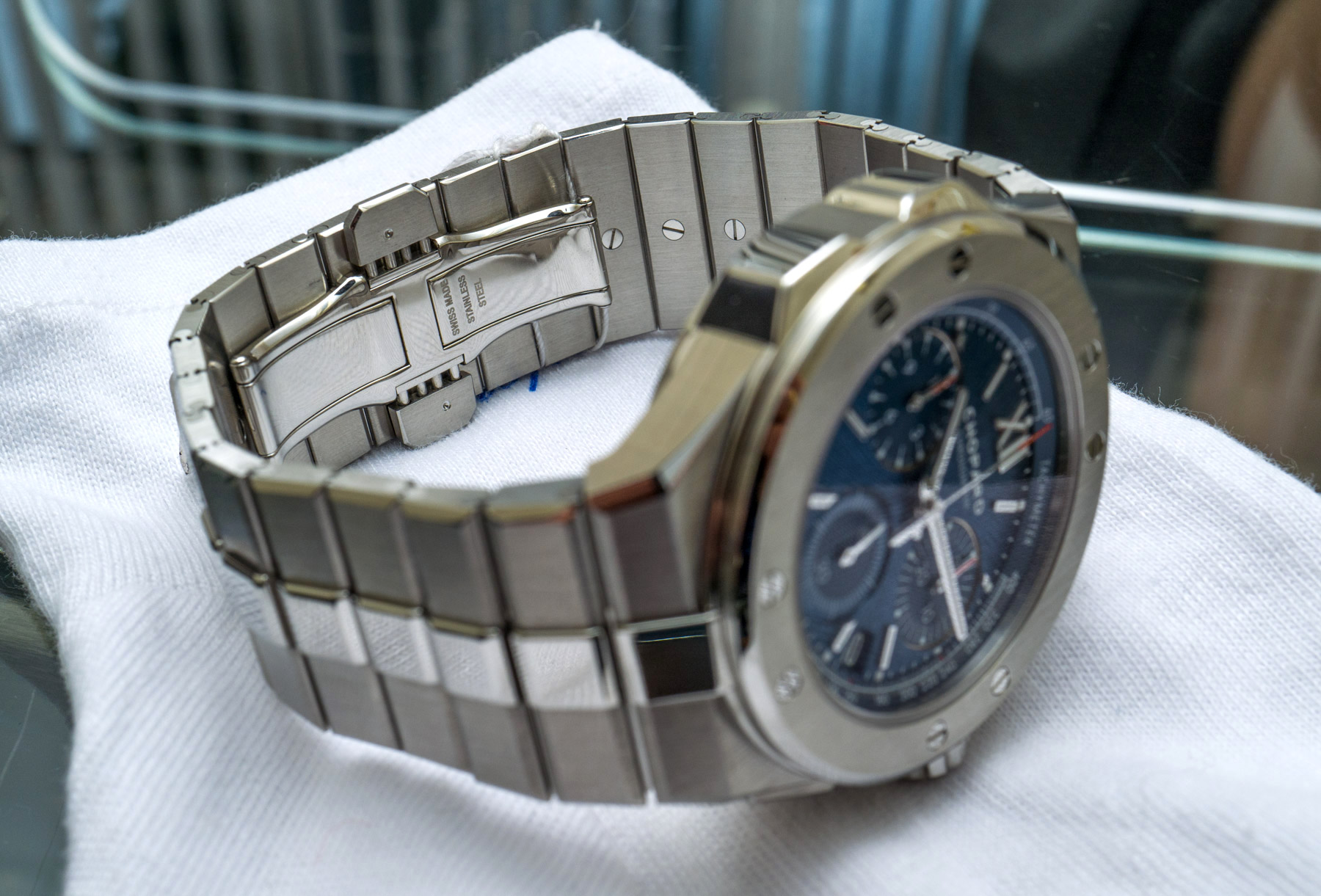 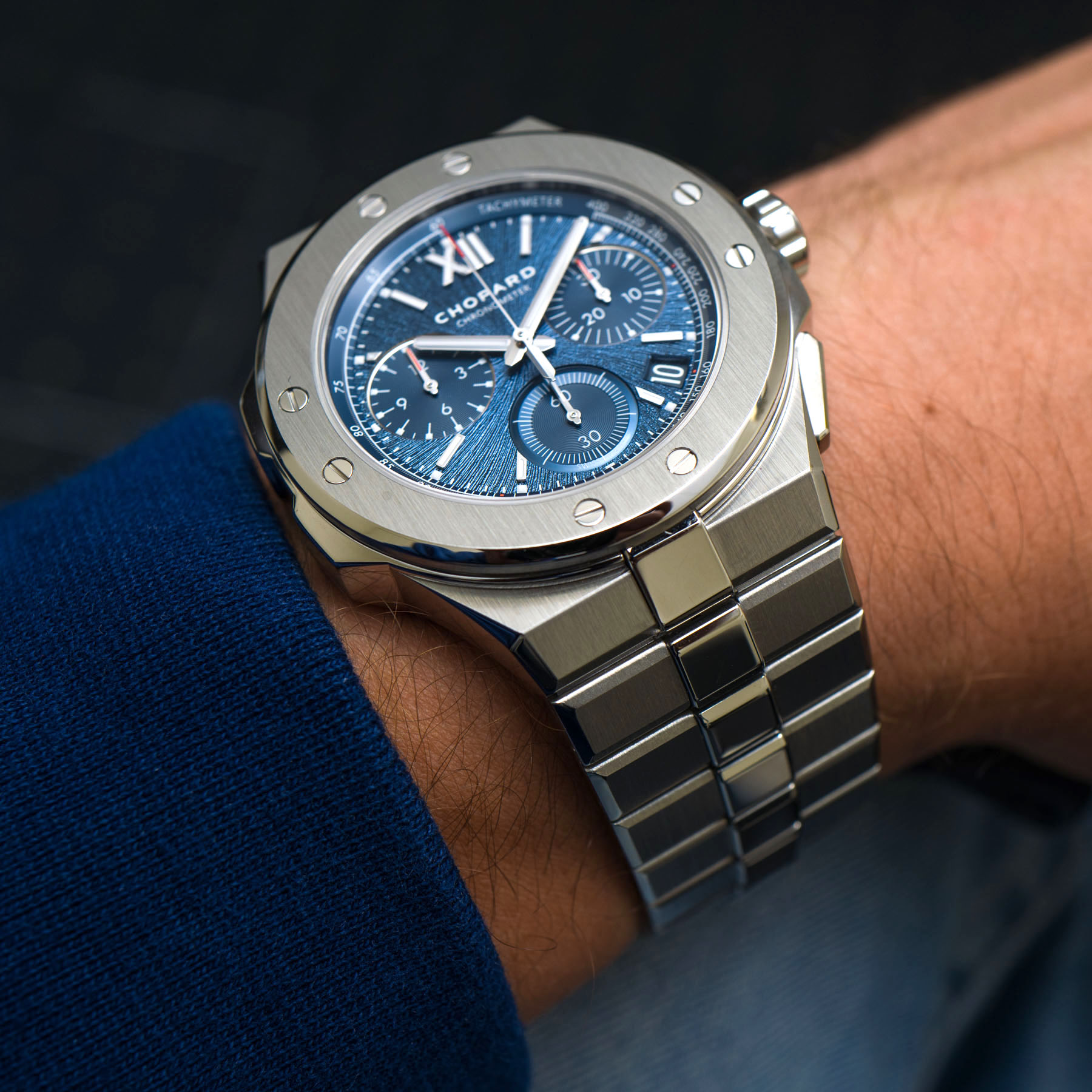 The 44mm chronograph version of the Alpine Eagle is a distinctly more, shall we say, butch version of the original. Vibe-wise it compares to the three-hander as the Offshore compares to the Royal Oak: It’s more and, in the immortal words of Clarkson, “more is better.” Well, for some, at least. But hey, if it’s more that you are after, you’ll get it here. Fortunately, the Alpine Eagle XL carries the extra 3mm width and all that extra traffic on the dial graciously. It remains beautifully proportionate — again, another aspect that a painfully high percentage of luxury watches disregard entirely. The sizes of different components such as the bezel, case, and bracelet are proportionate to each other and the balance between brushed and polished surfaces and edges is also spot on… And that includes such nuanced details like the polished countersinks of the screws in the bezel. That’s some first-class showing off right there by the designers and craftspeople responsible for this case. 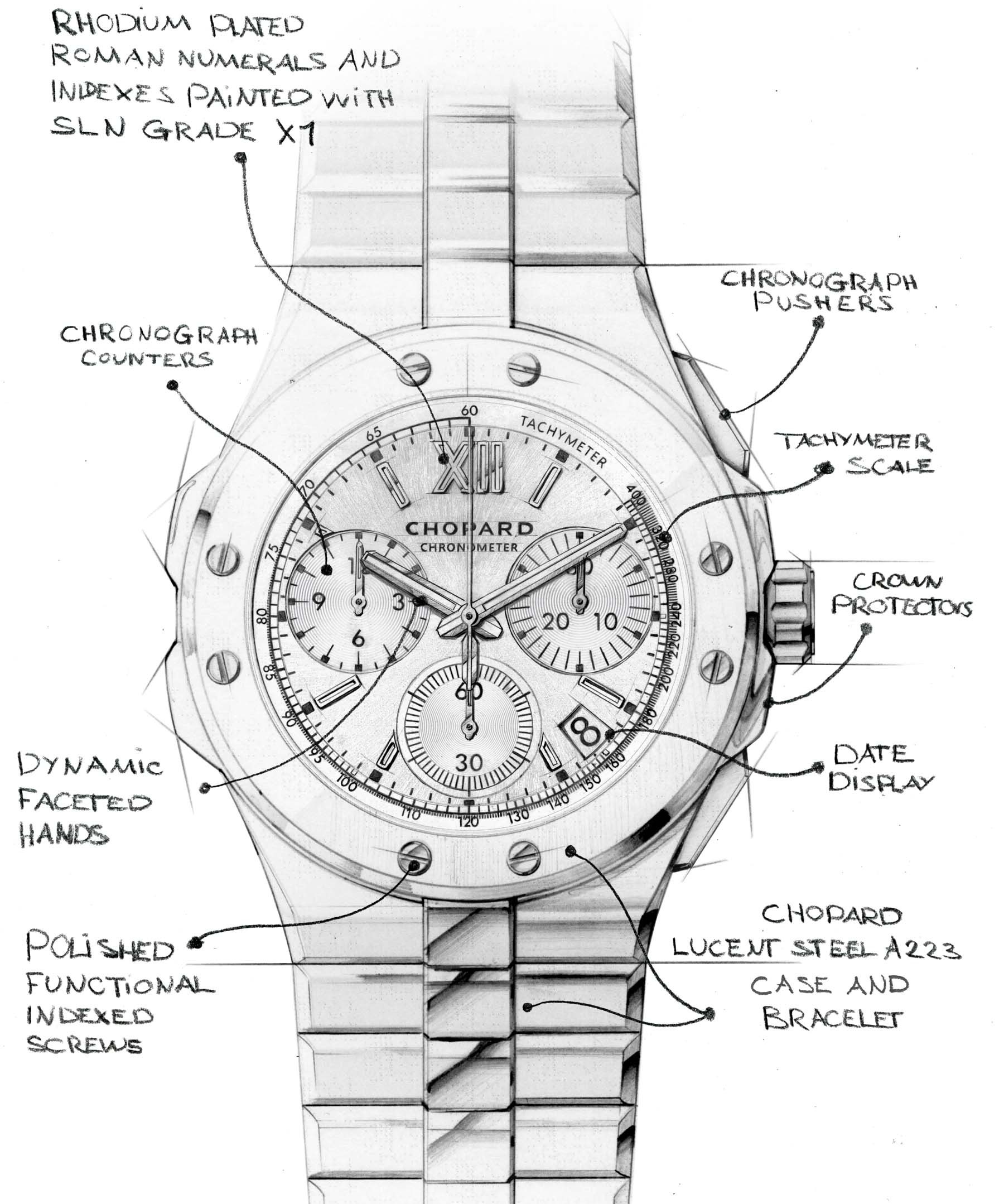 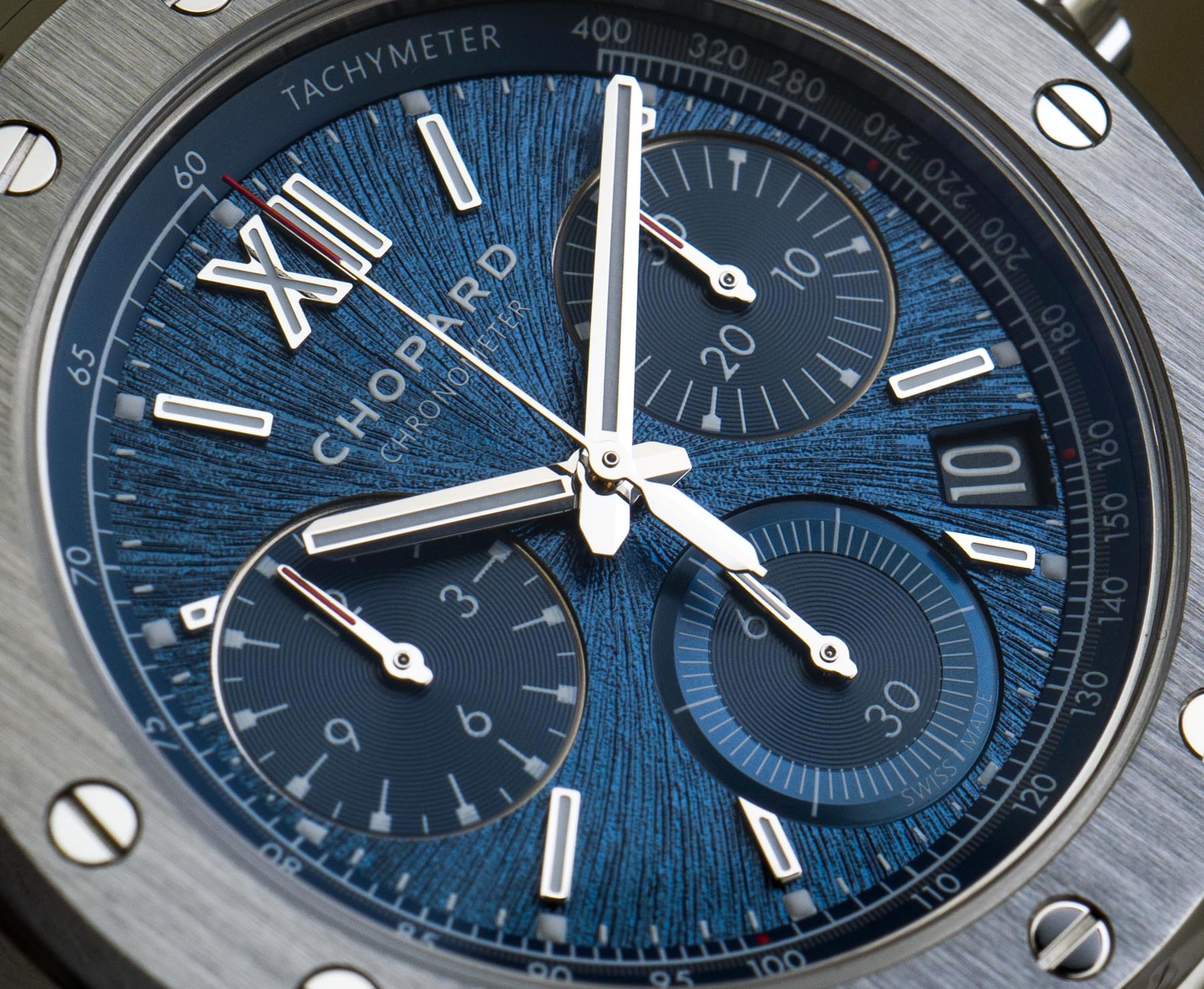 The dial carries on its distinctive and rather heavy-handed sunburst pattern inspired by the iris of the eagle. Its structure is much more textured and more grainy when compared against the tame and discreet sunburst brushed dials we have grown accustomed to seeing everywhere. The quality and luster of the applied indices and hands somehow manage to not pale in comparison to the case itself, a feat that helps daytime legibility, while their lumed centers provide night time legibility — even though Chopard’s lume on some of its references is yet to catch up in brightness and surface quality with the competition, these new pieces are said to have proper Super-LumiNova. 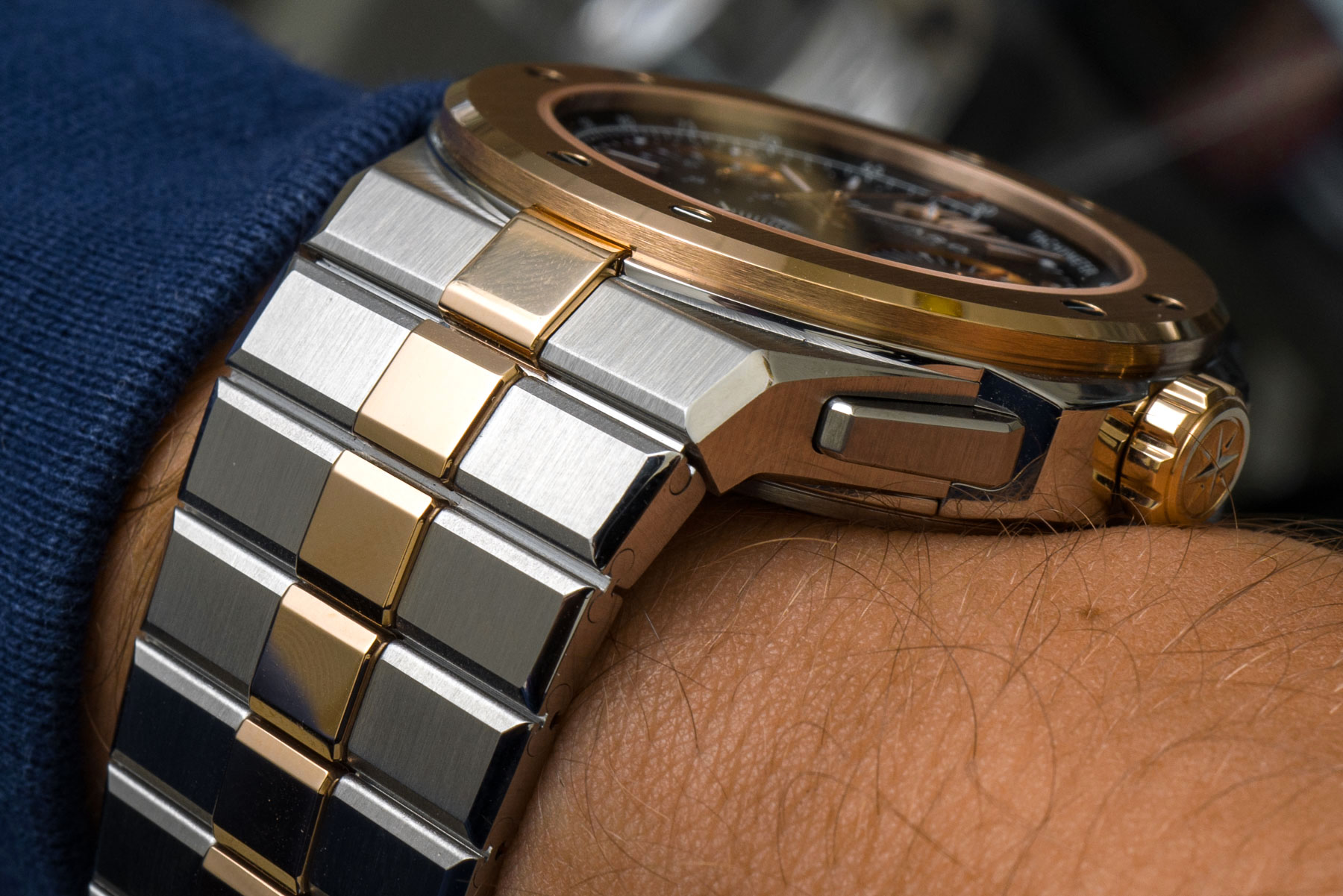 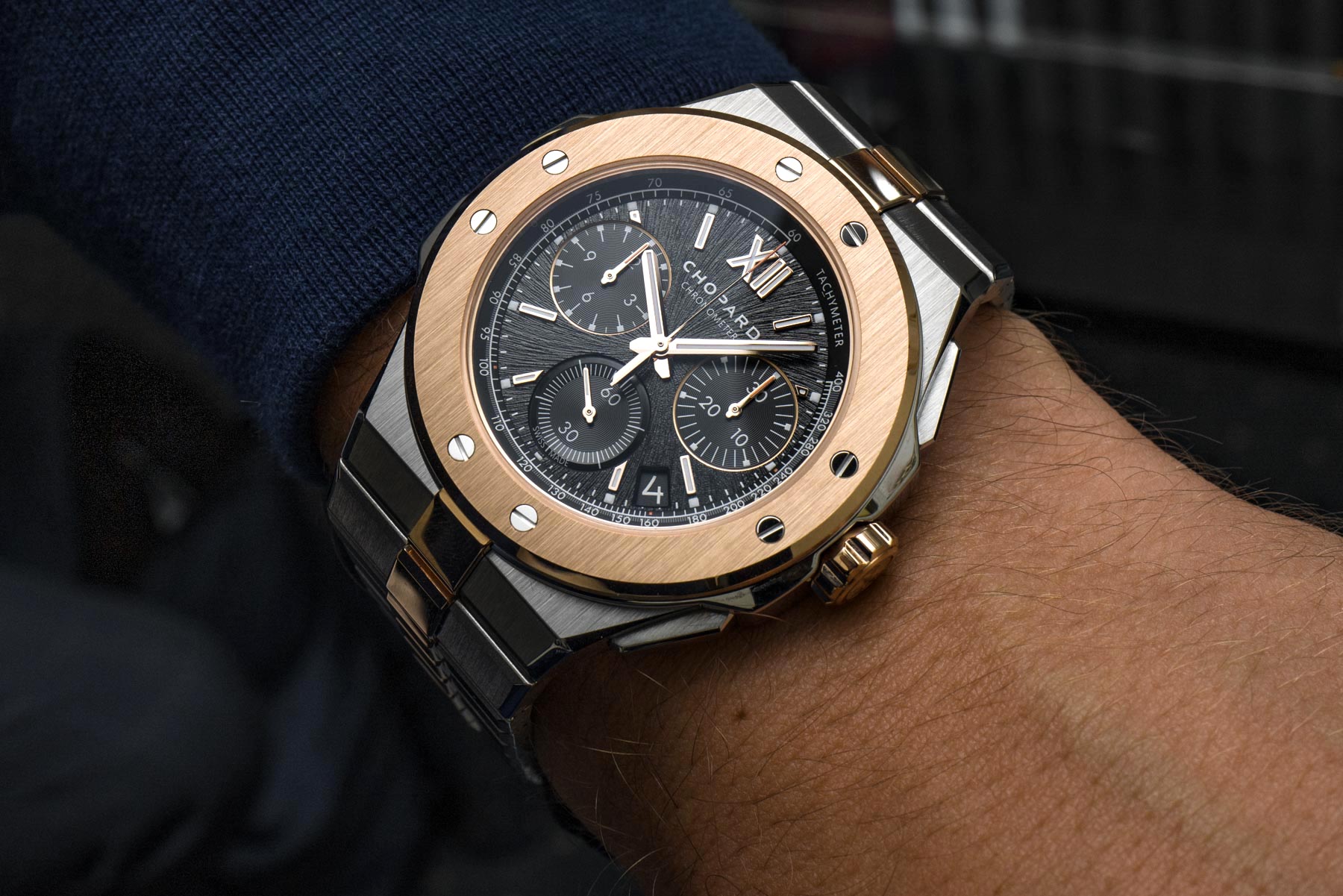 On the wrist, the 13.15mm thickness — impressive for a column-wheel chronograph with a full-size self-winding rotor and vertical clutch — makes a positive difference by reducing wobble and eliminating the hockey-puck effect some of the competition struggles with. The 41mm three-hander version was only 9.7mm all cased up, so the XL Chrono has gained 3mm in both diameter and thickness. The short, integrated lugs, flexible and thin bracelet end-links, superb proportions, and relatively slim crown all do their part in making the XL Chrono rank on the smaller end of the spectrum of 44mm wide watches. 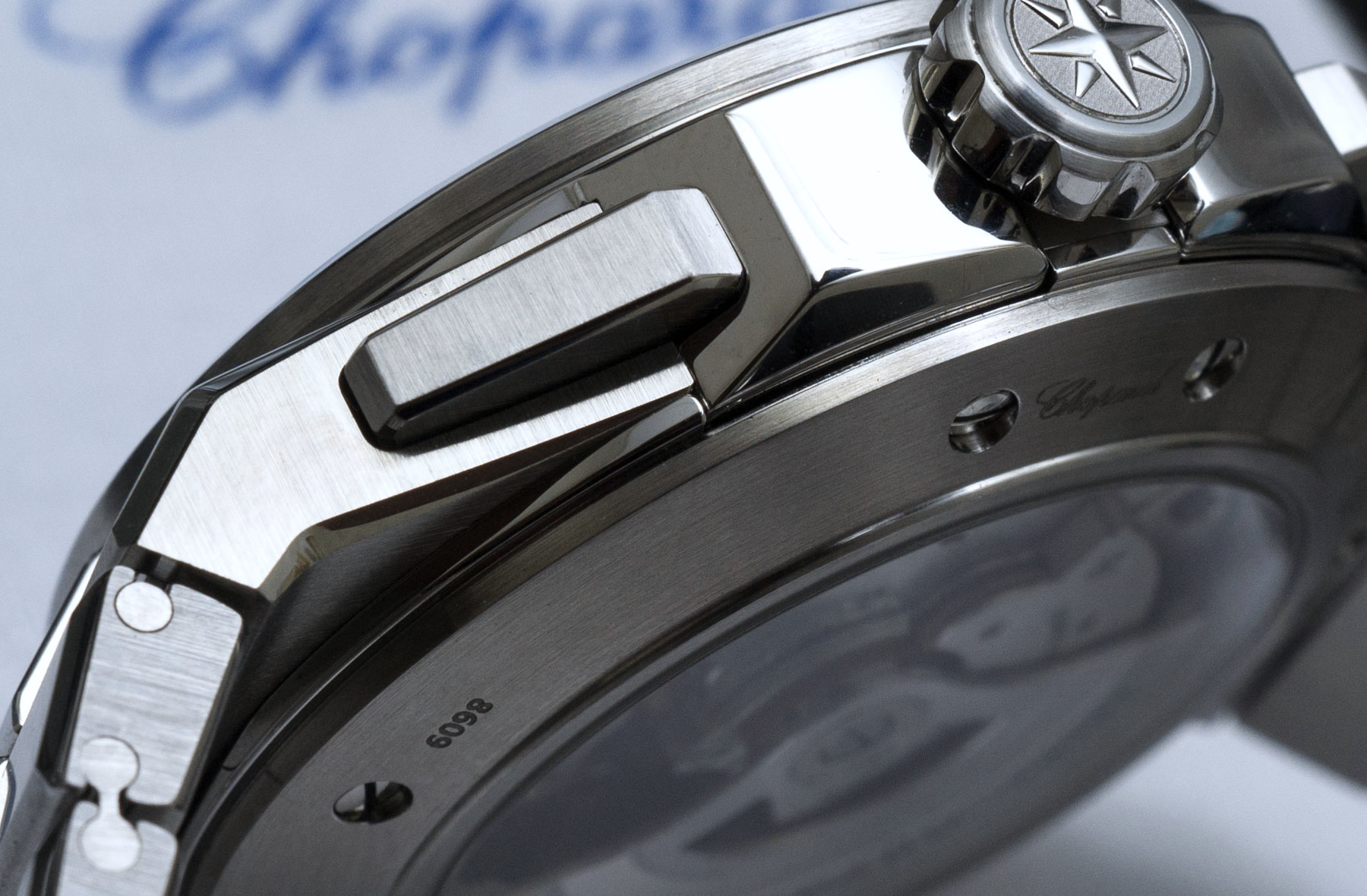 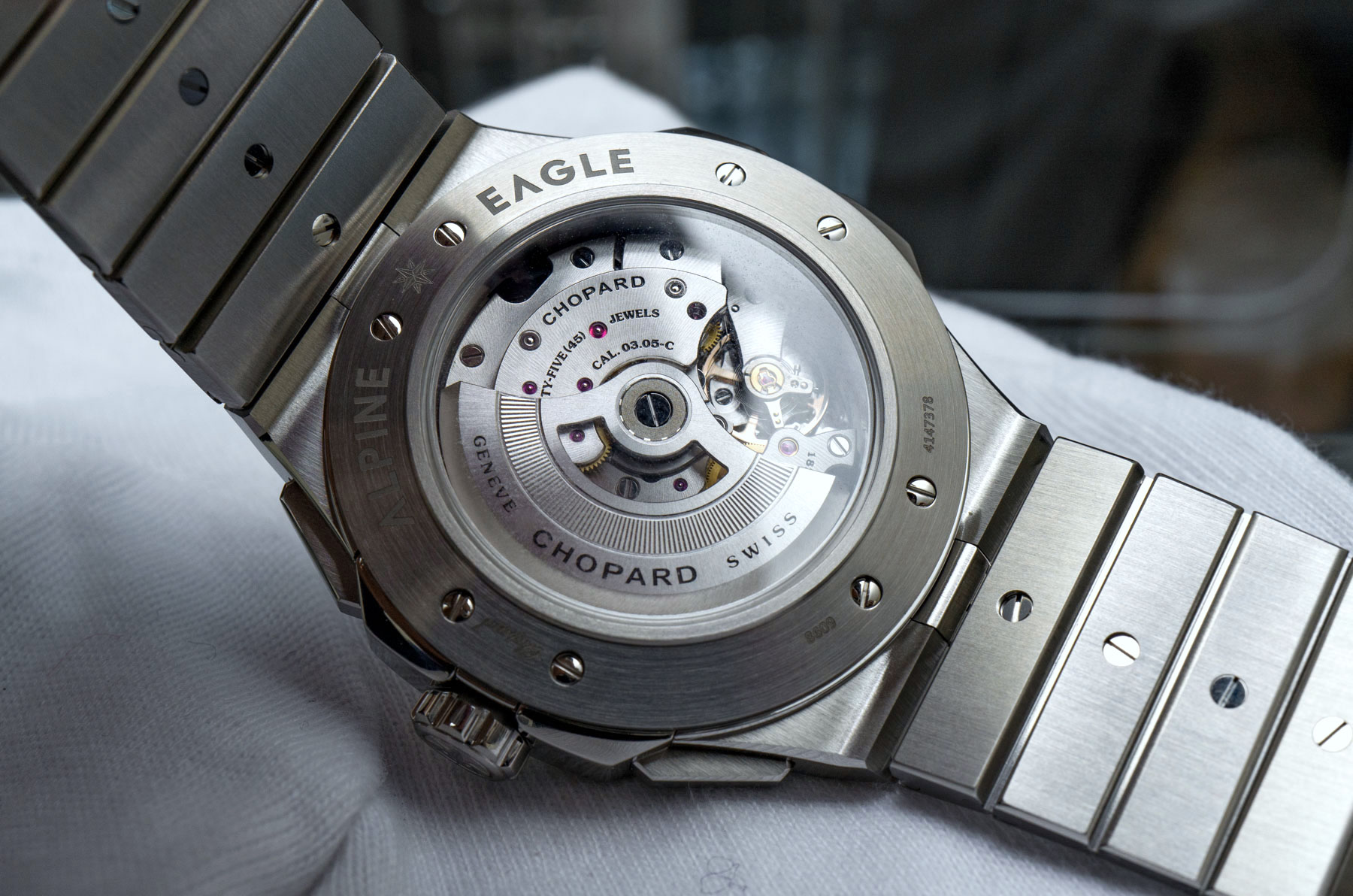 The massive and neatly finished pushers and crown are linked to the Chopard 03.05-C caliber, an in-house manufactured movement with four patented solutions and most all the goodies: COSC chronometer certification; vertical clutch; column wheel; flyback function; full-size, open-worked tungsten alloy rotor; unidirectional gearing system (to reduce energy losses upon rapid winding); 310 components and 60 hours of power reserve matched to a more stable 4Hz operating frequency. It compares unfavorably in the eye-candy department when compared to the Royal Oak Chronograph — or so it would if the AP didn’t come with a solid steel caseback that obscures the movement. 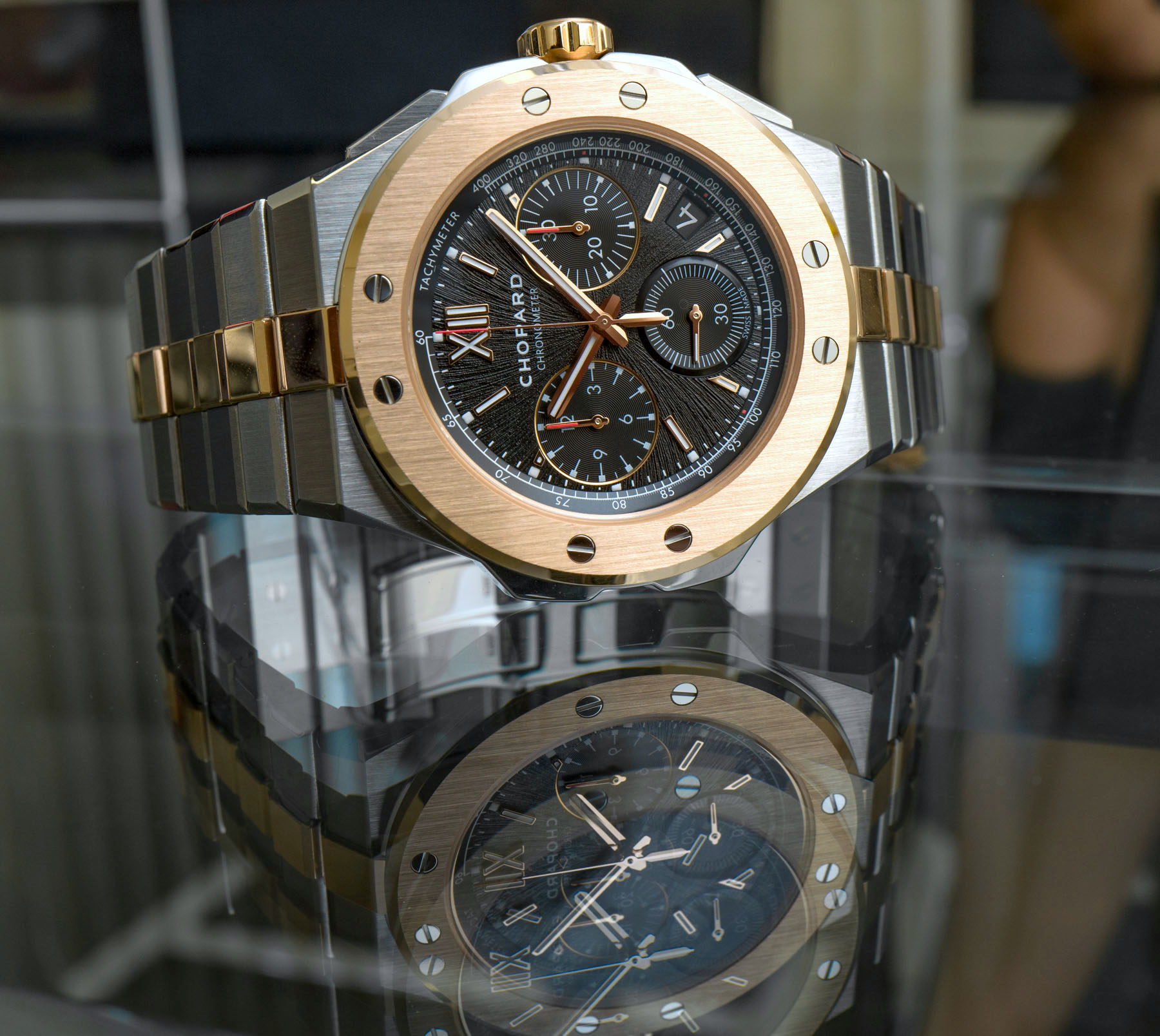 Covered by a properly anti-reflective coated sapphire crystal on the front and rated water resistant to 100 meters as a proper steel sports luxury watch should be — again, the comparable steel APRO chronograph offers 50m —, the Alpine Eagle XL Chrono does appear to be the complete package and, as far as specifications and finishing are concerned, one of the strongest value propositions in the very top tier of luxury sports chronographs.

To learn more about the history, concept, Lucent Steel A223 material, and design of the Chopard Alpine Eagle, as well as how it compares status-wise to its competition, you’ll find all there is to know about it in our hands-on debut article from last year. The XL Chrono is an arguably more masculine and powerful reinterpretation of the more tame and balanced three-hander from last year. Given the $7,000 price difference between the chronograph and the three-hander and how relatively smaller watches are becoming the trend again (not to mention their greater wearing comfort), I feel the 41mm Alpine Eagle for $12,900 in all-steel is a stronger proposition, overall.

However, if you have to have a chronograph in your steel who’s-who timepiece, the Alpine Eagle continues to show the competition — that might have gotten a bit too comfy in its position — what exceptional finishing and strong value looks like, even at this elevated price point.