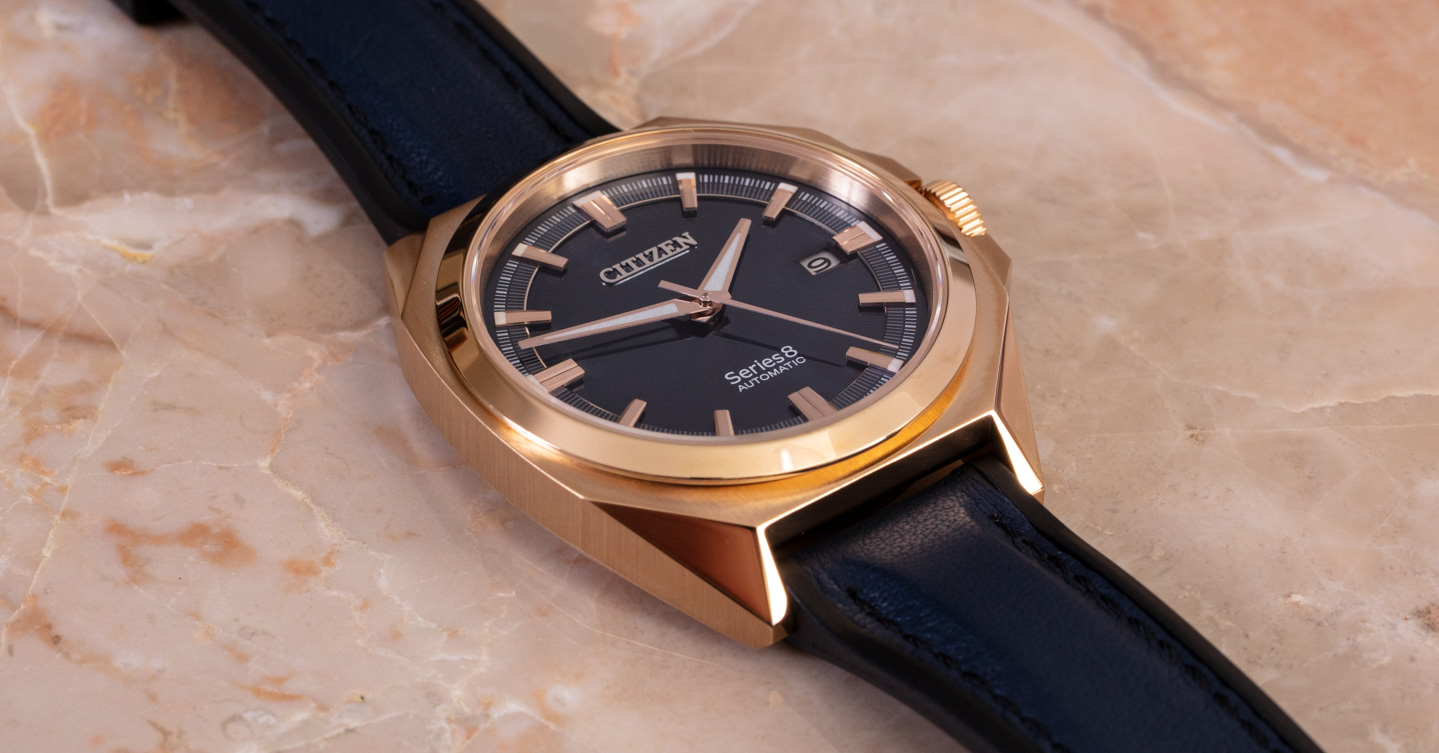 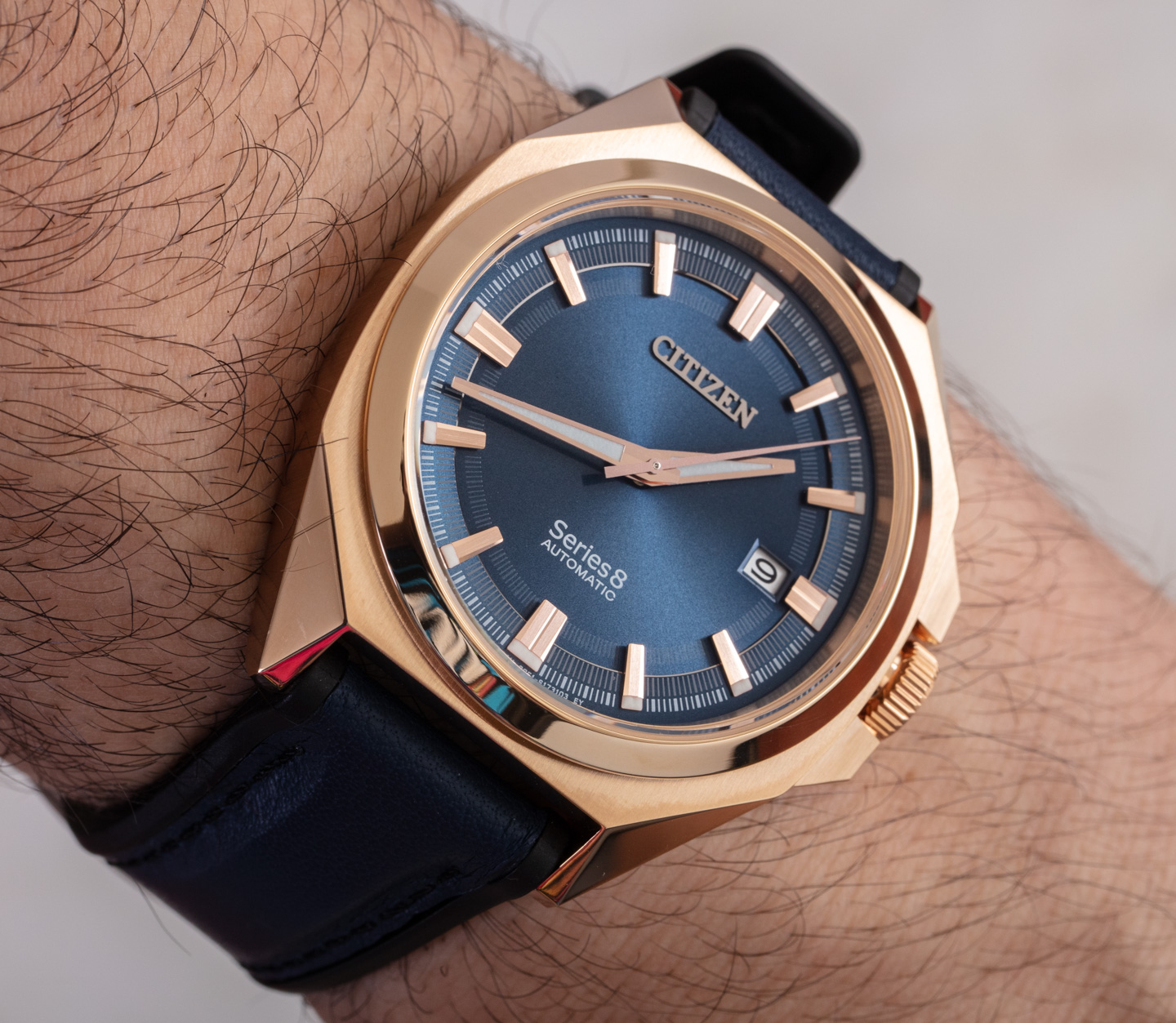 Today, I got hands-on with a member of the freshly reintroduced Citizen Series 8 watch collection, the platform where Citizen has launched a series of existing new automatic mechanical movements. Citizen originally debuted the latest generation Series 8 watches back in March 2021 on aBlogtoWatch to much fanfare because it has been about a decade since Citizen introduced any new mechanical movements for its timepieces. The Japanese company did, indeed, release new mechanical movements through its in-house Miyota movement-making company, but Series 8 really represents Citizen pushing upmarket with a compelling selection of products meant for global distribution.

This particular watch is the reference NB6012-18L, which in Japan is known as the Citizen Series 8 831. This is distinct from the Series 8 870 models, as well as the slightly different Series 8 830 models. Citizen characterizes the Series 8 831 collection (which currently consists of only two watches) as “practicality meets style.” These are the entry-level-priced Series 8 watches and in the United States have a retail price of under $1,000 for this reference NB6012-18L version in gold-toned steel on the leather and silicone strap, and at $1,000 for the Series 8 831 NB6010-81E, which has a black dial, natural steel case, and is fitted to a matching steel bracelet. 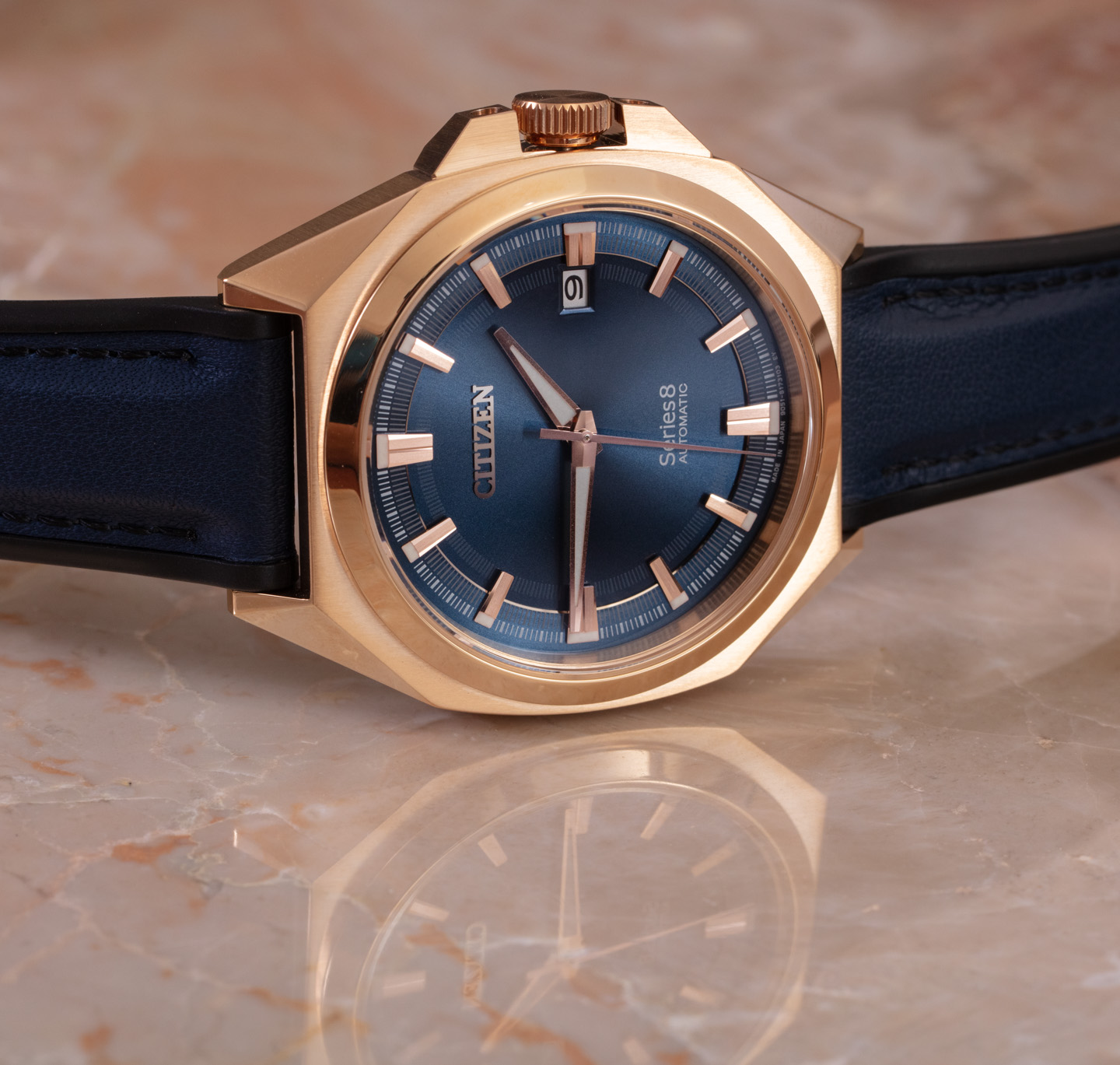 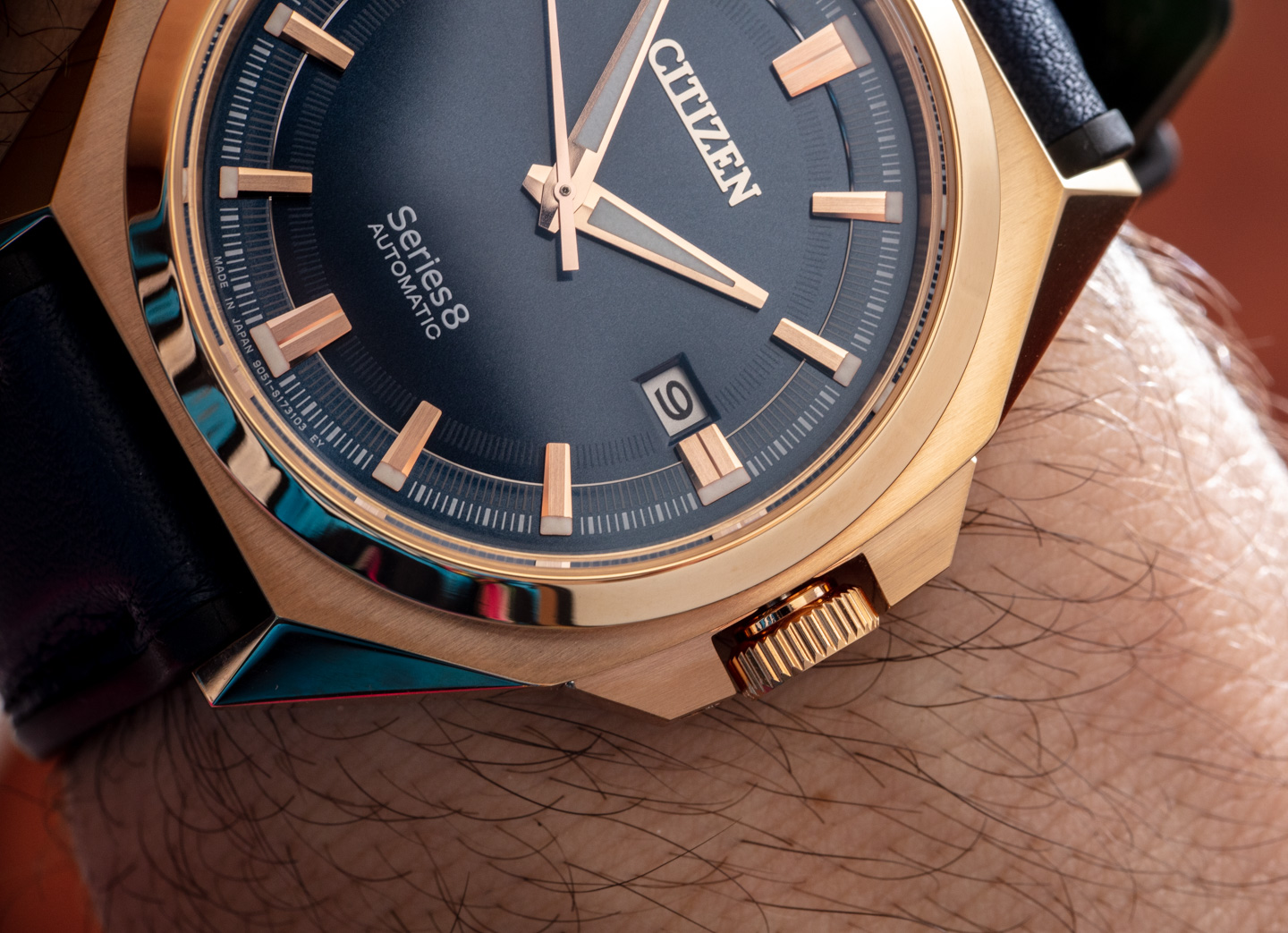 This gold and blue model of the Series 8 isn’t the wildest-looking of the new Series 8 models but has a distinctiveness that I think helps separate it from your run-of-the-mill steel watch with black dial. Citizen wants people to purchase Series 8 watches for a blend of its conservative designs and ability not to look like anything else on the market. In that, I think Citizen really succeeded because the Series 8 models (all of them) certainly have a look of their own, that blends Citizen DNA with the look and feel of what a traditional analog watch designed in Japan often looks like. That means a high focus on legibility, with bold and often masculine shapes and textures, along with a merger of traditional style and contemporary design elements. I’d say the Series 8 case and dial in this instance really does fit that bill.

Once you put the Series 8 NB6012-18L on the wrist, the experience is remarkably different from looking at it in a picture. The watch is comfortable, with a case much more complicated than most other traditional-looking Citizen watches, and great use of color and finishing. Then there is the novel automatic mechanical movement, which is the in-house-made Citizen caliber 9051 that operates at 4Hz with 42 hours of power reserve. The movement is both attractive (though you can’t see it through the rear of the watch), but also a solid performer. This is Citizen taking on higher-end mass-produced movements from Swiss companies such as ETA and Sellita, but also its local rival in Japan, Seiko. Citizen has been more focused on pedestrian pricing as compared to Seiko, which has aggressively moved upmarket in a lot of product categories. Citizen is a bit behind but certainly not late in releasing more and more up-market timepieces that compete in the $1,000 – $3,000 (and up) luxury watch battlefield. 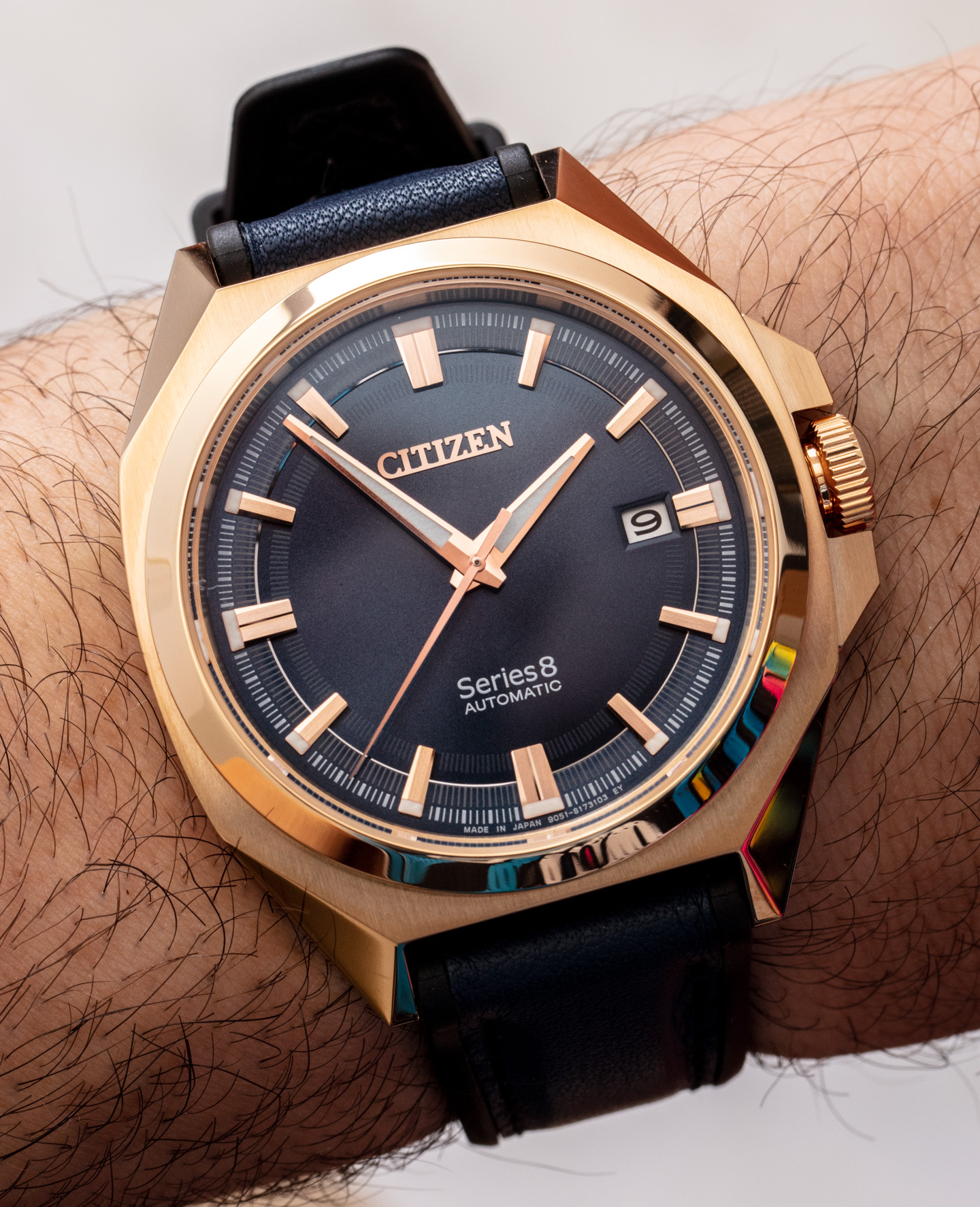 The round-yet-geometric Series 8 831 case is rather impressive when you look at all the little details. It might not be immediately appealing since it is a novel look, but I encourage people to try it out since it really does grow on you. The case is 40mm wide and just 10.1mm thick with a water resistance rating of 100 meters. Over the dial is a flat, AR-coated sapphire crystal, and the case itself is ion-plated steel with a gold tone using a proprietary Citizen coating process. I’m personally waiting for watches like this to be produced from Citizen’s exclusive Super Titanium material — and I am sure that will be coming in due course. With that said, getting some of the nicer polishes on the case is easier to do in steel – and this is a very nicely finished watch case.

The dial of the Series 8 831 is very traditionally Japanese in a good way. Emphasis is on the large applied hour markers and lume-painted hands. The dial feels both technical and industrial, but also conservative and classic, at the same time. Citizen and other Japanese brands like to promote the capabilities of their industrial know-how right on the dials of their products. Compare that to many Swiss luxury brands that have third-party suppliers who produce their dials and mostly focus on design versus sheer execution. The Series 8 831 dial here has a blue galvanic dial with matching gold-tone hands and markers, with a neatly designed date window at the 3 o’clock hour marker. 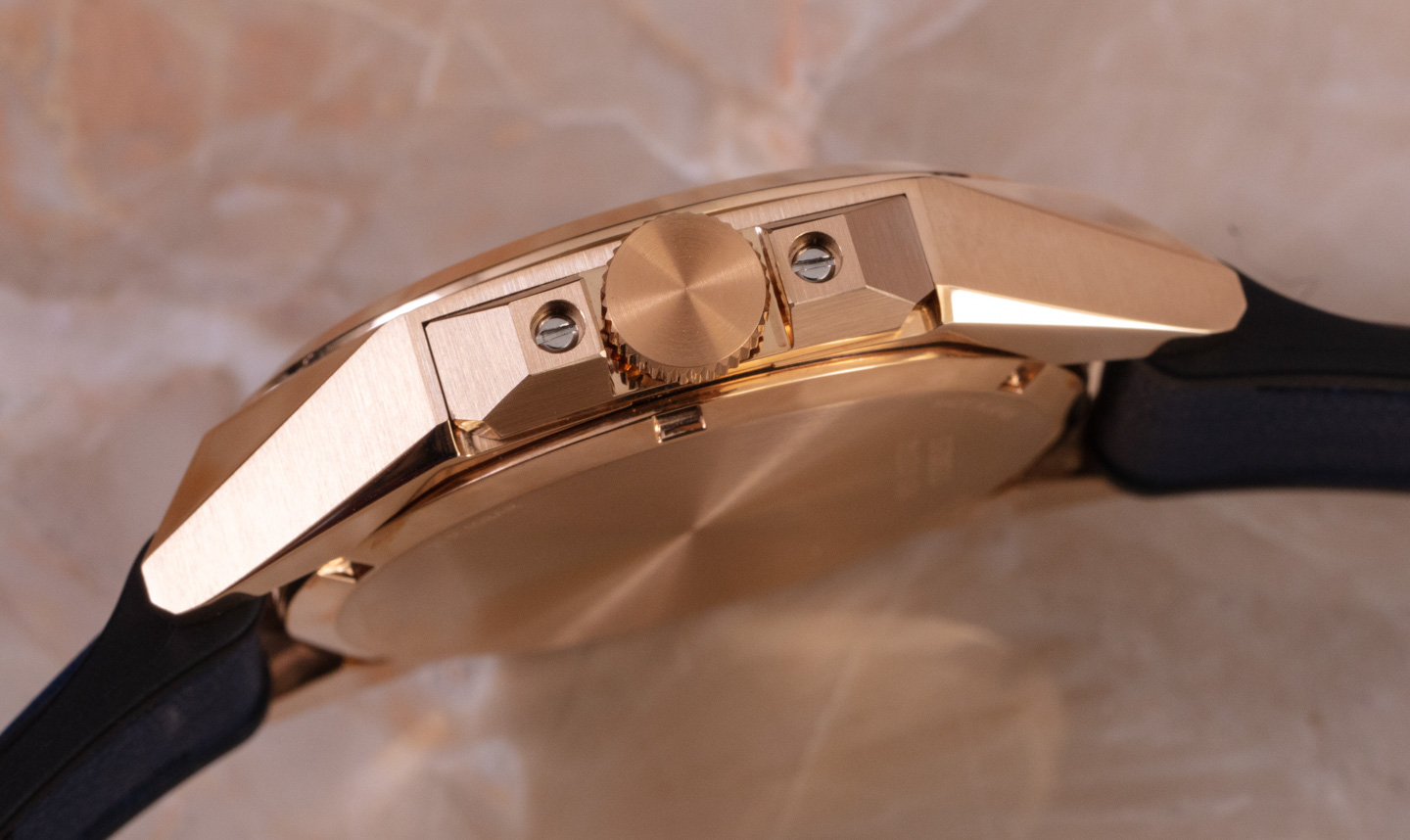 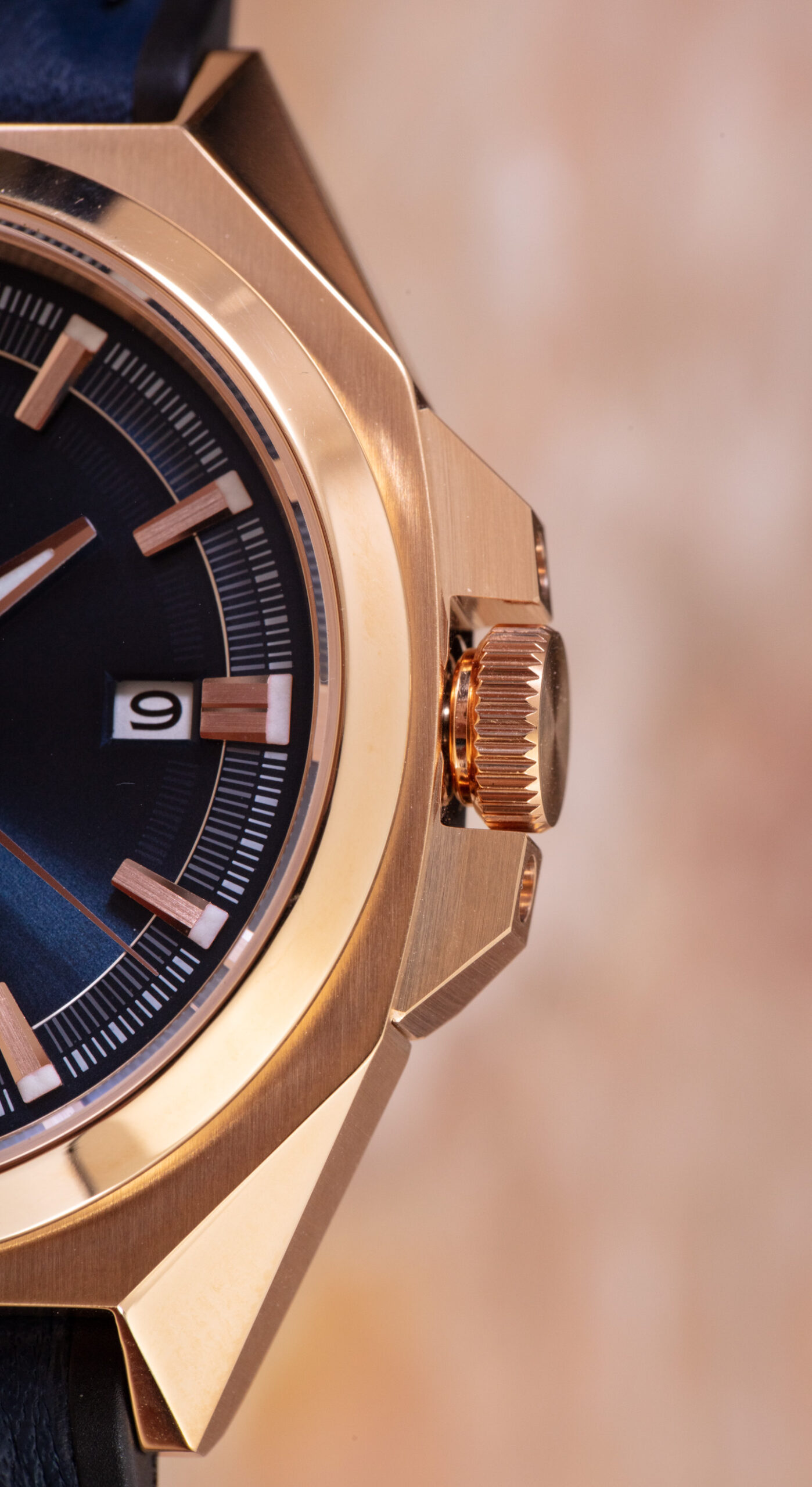 While the Series 8 watches from Citizen are a success, this new collection presents an important learning opportunity for the Japanese watchmaker. Until recently, the strategy of most Japanese watches was to become an immediate hit with consumers and therefore start to sell relatively quickly. This meant carefully monitoring what they feel the market wants, then producing it. That is a good strategy in a lot of areas but has meant that globally sold (as opposed to just in Japan) Citizen watches often strove to have a “familiar look” versus one that has a lot of original DNA. The new era of high-end Japanese watches is one where distinctive and original designs are very important for their long-term strategy. They are following the route of the Swiss who succeeded not in supplying the world’s timekeeping needs, but rather in producing a visible status symbol and nurturing the concept of a strong luxury brand. The downside of that is that novel-looking products can take some time to be accepted by the market. There are numerous stories of now-famous watches having taken years to truly hit a stride with consumers. 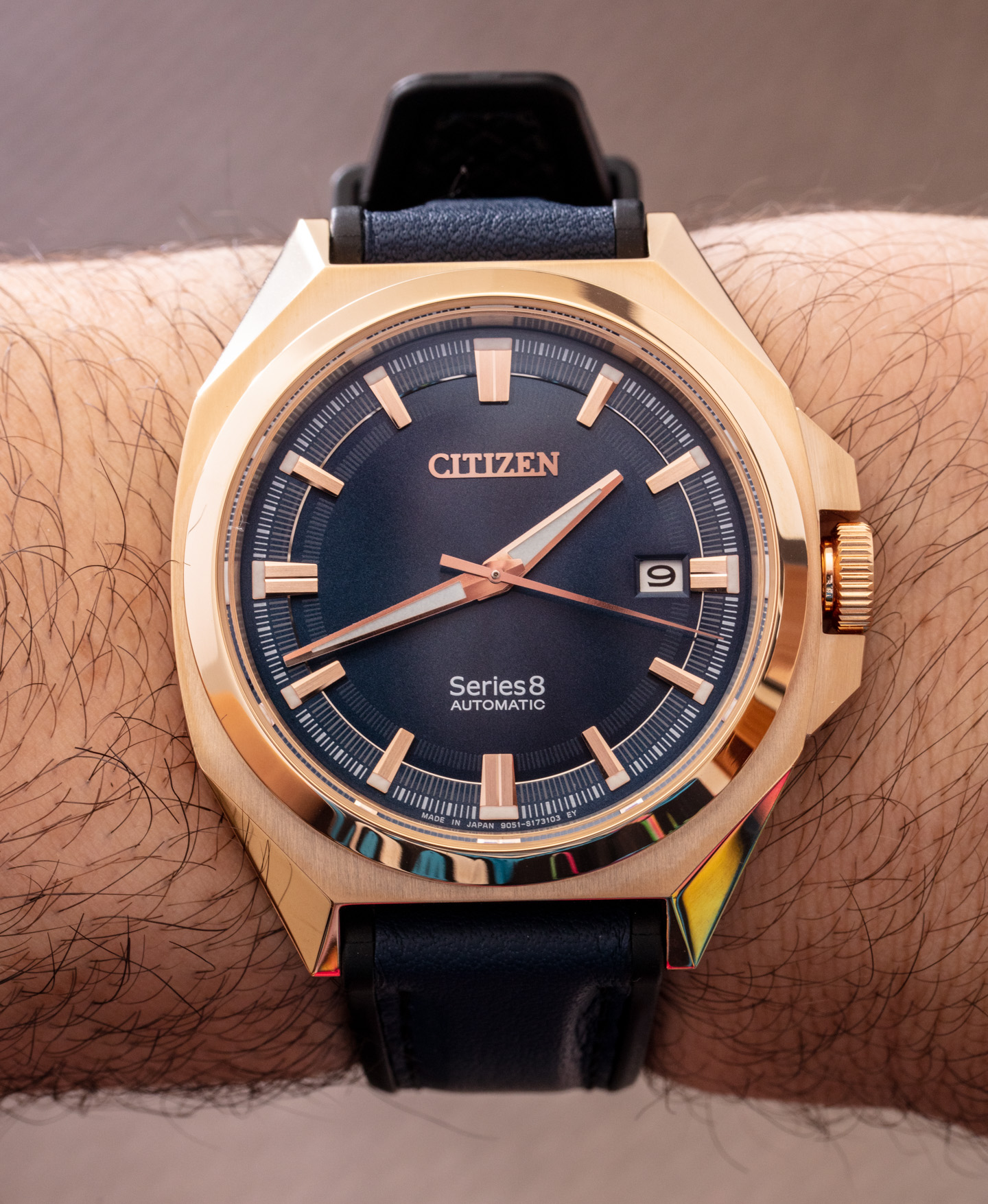 As important companies like Citizen follow in these steps (in their own way of course), I hope they develop a new internal culture of being patient with the market and pushing newer products for a number of seasons until they expect them to really make the biggest impact possible. The reality is that many of the target consumers for products like the Citizen Series 8 will not immediately understand or appreciate the concept the first time they learn about it. Consumers need a fair bit of exposure to this new global festoon of higher-end Citizen watches (especially the mechanical ones) to truly appreciate and buy into the concept. Given how nice these watches are, I know it will happen eventually, but I hope that the good people at Citizen have the patience and energy to support the Series 8 collection and future new mechanical watches from the company until enough consumers learn how cool they are. Price for the Citizen Series 8 831 NB6012-18L watch is $950 USD. Learn more or order at the Citizen watches website here.