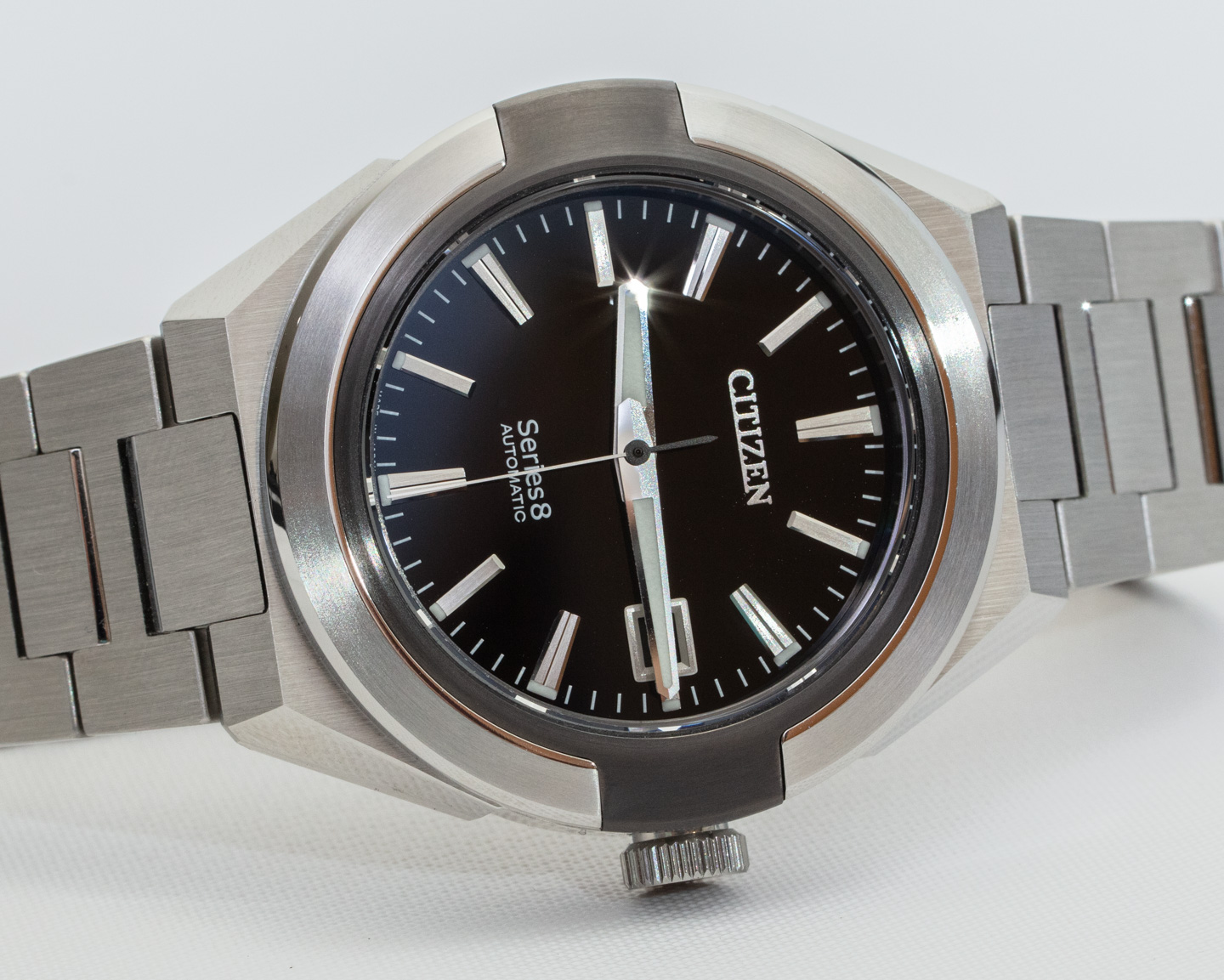 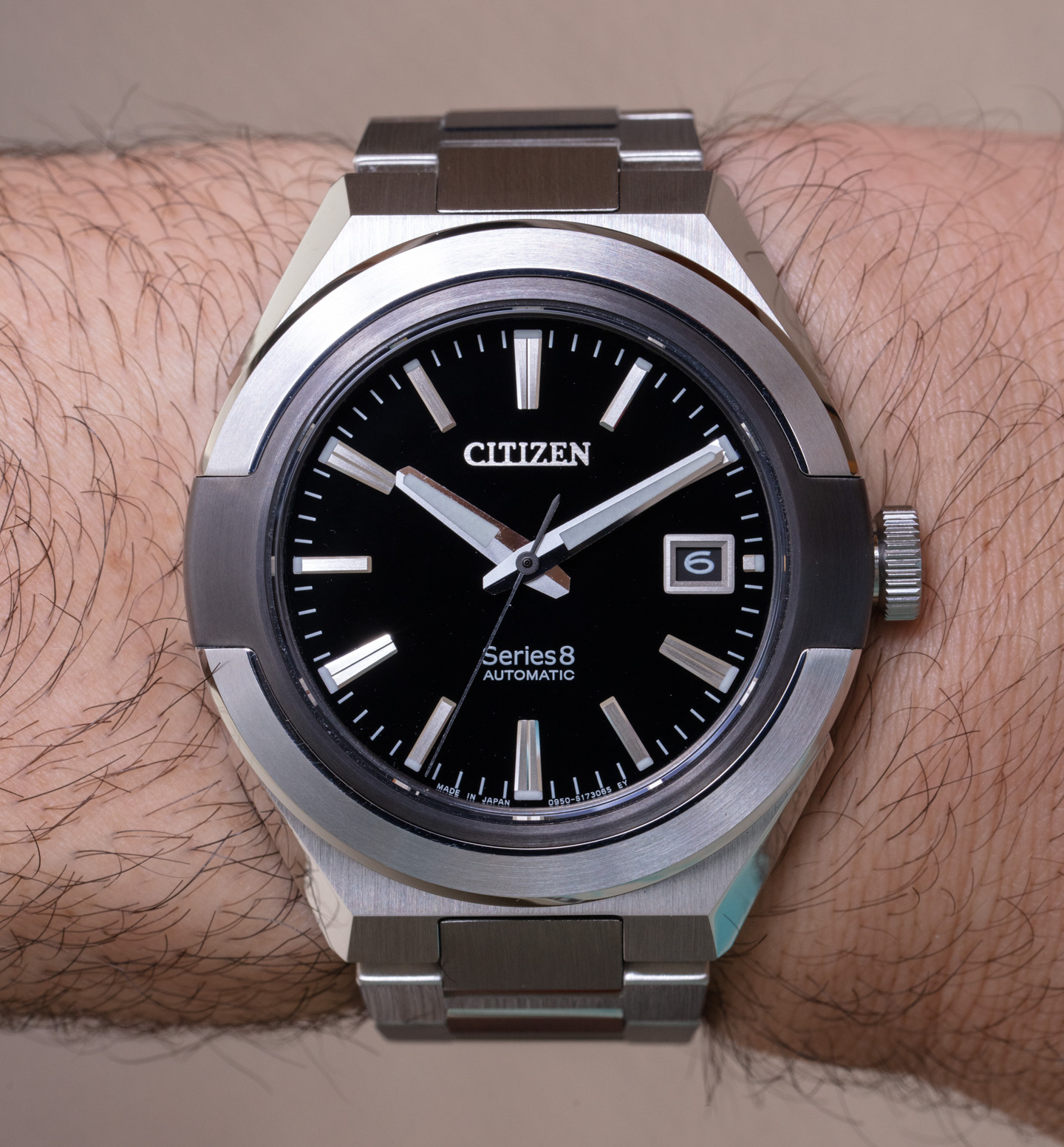 Earlier in 2021, Japan’s Citizen made big waves in the watch industry space by announcing a slew of new mechanical watches, including new automatic mechanical movements. While the Citizen Group’s Miyota movement factory has been continuously making quartz and mechanical movements for some time, it has been over a decade since Citizen, as a brand, introduced a new mechanical movement. The 2021 Citizen news about mechanical watches started with the announcement of more expensive Citizen Calibre 0200, which later resulted in the debut of the new Citizen Series 8 watches that are both more affordable and serve as a relaunch for the legacy Series 8 product family.

Please reference the above-linked article for more information about the larger Citizen Series 8 watch collection, which includes 830, 831, and 870 Series models. This review will focus on Citizen Series 8 870 reference NA1004-87E. This is a top-level Series 8 watch that has a sister model known as the NA1000-88A, which differs only in that it has a silver-colored (versus black) dial. These are currently the most expensive Series 8 pieces, but they are still roughly one-third the price of the fancier Citizen Calibre 0200 models. Since I’ve now had a chance to experience both models, I will quickly answer the question of whether the Calibre 0200 (which has a totally different type of mechanical movement) is worth the extra money? 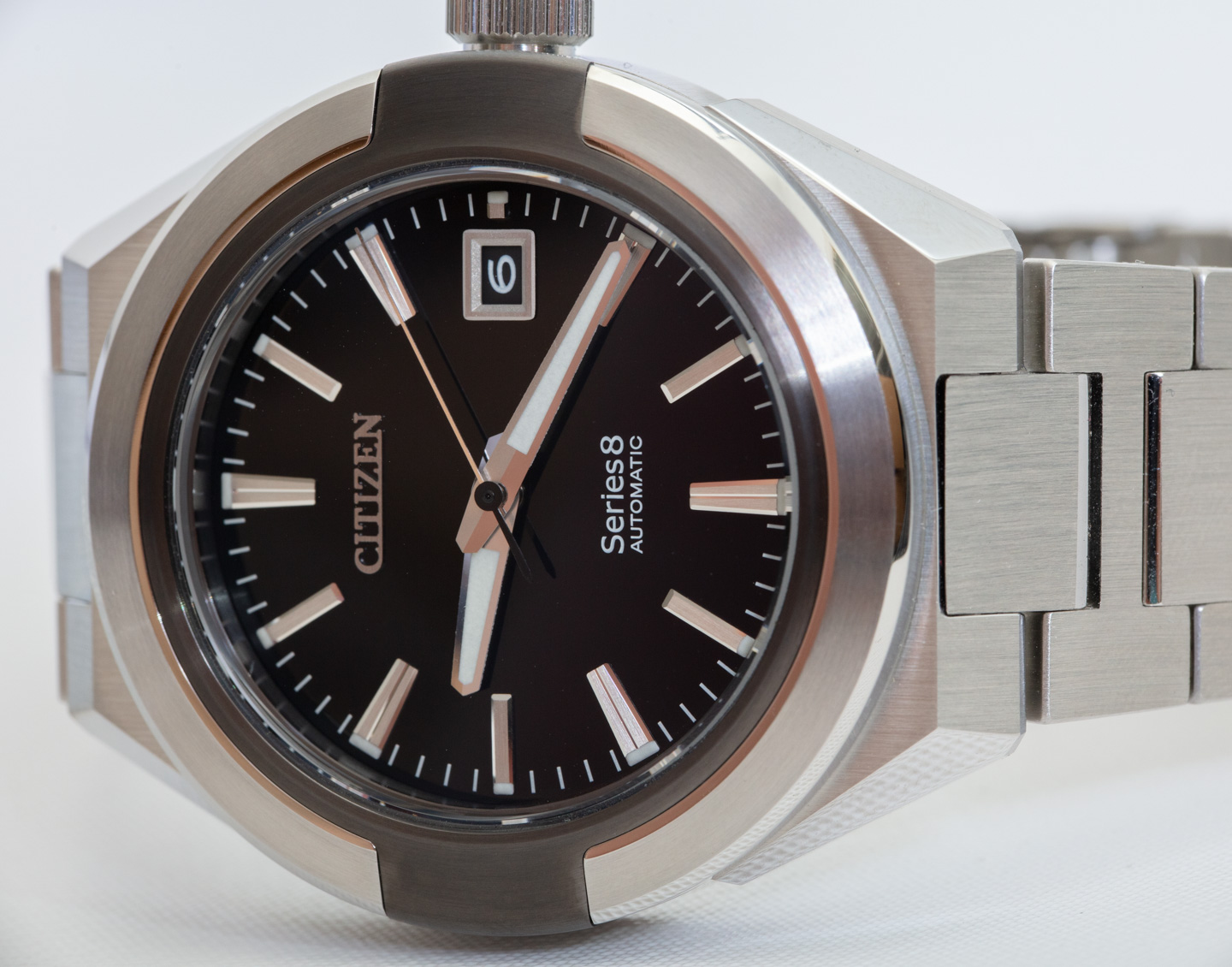 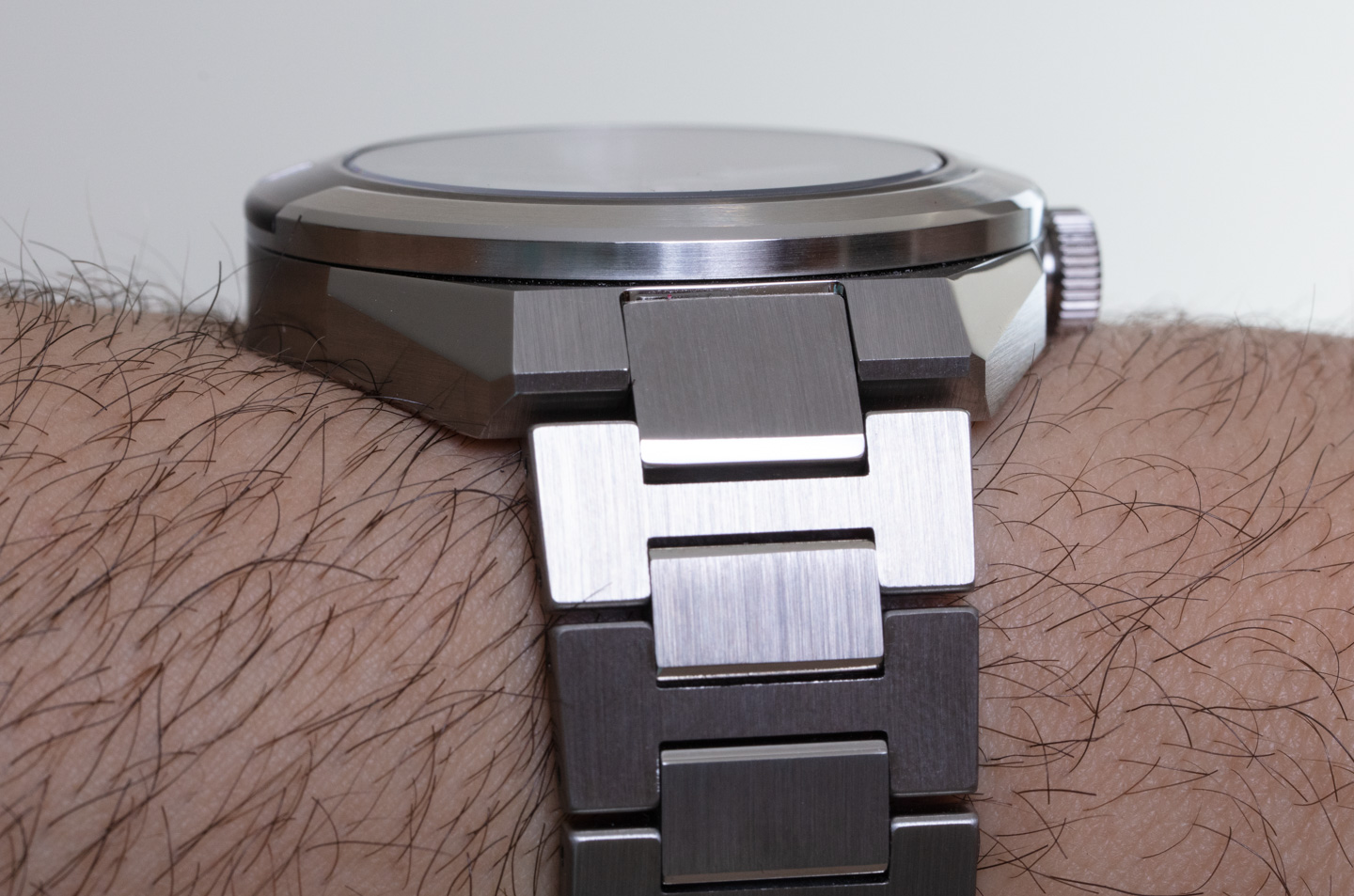 From a wristwatch enthusiast’s perspective, yes. That said, it is a bit odd for Citizen to come out with two very good products at the same time, in the same product category, even if, to Citizen, these are two very different types of products. The Calibre 0200 and the Series 8 are both modern-looking dressy watches with a contemporary, slightly sporty twist to them. The Series 8 is the more modern of the two when it comes to design, while the Calibre 0200 is richer with more details, better finishing, and parts produced with smaller tolerances.

The Calibre 0200 is for well-funded watch collectors who want to contend with what Citizen has already announced will be restricted production. It is a Grand Seiko competitor, through-and-through, and will be naturally exclusive, as well as coveted. Citizen did an excellent job with it in most respects, and I’ll discuss it more in a separate review. For purposes of the Series 8, Citizen created a high-end, albeit more mainstream, dress/business watch that is remarkable because it really doesn’t try to be a Euro-style watch. The Series 8 is entirely Japanese in its design, manufacture, and inspiration. 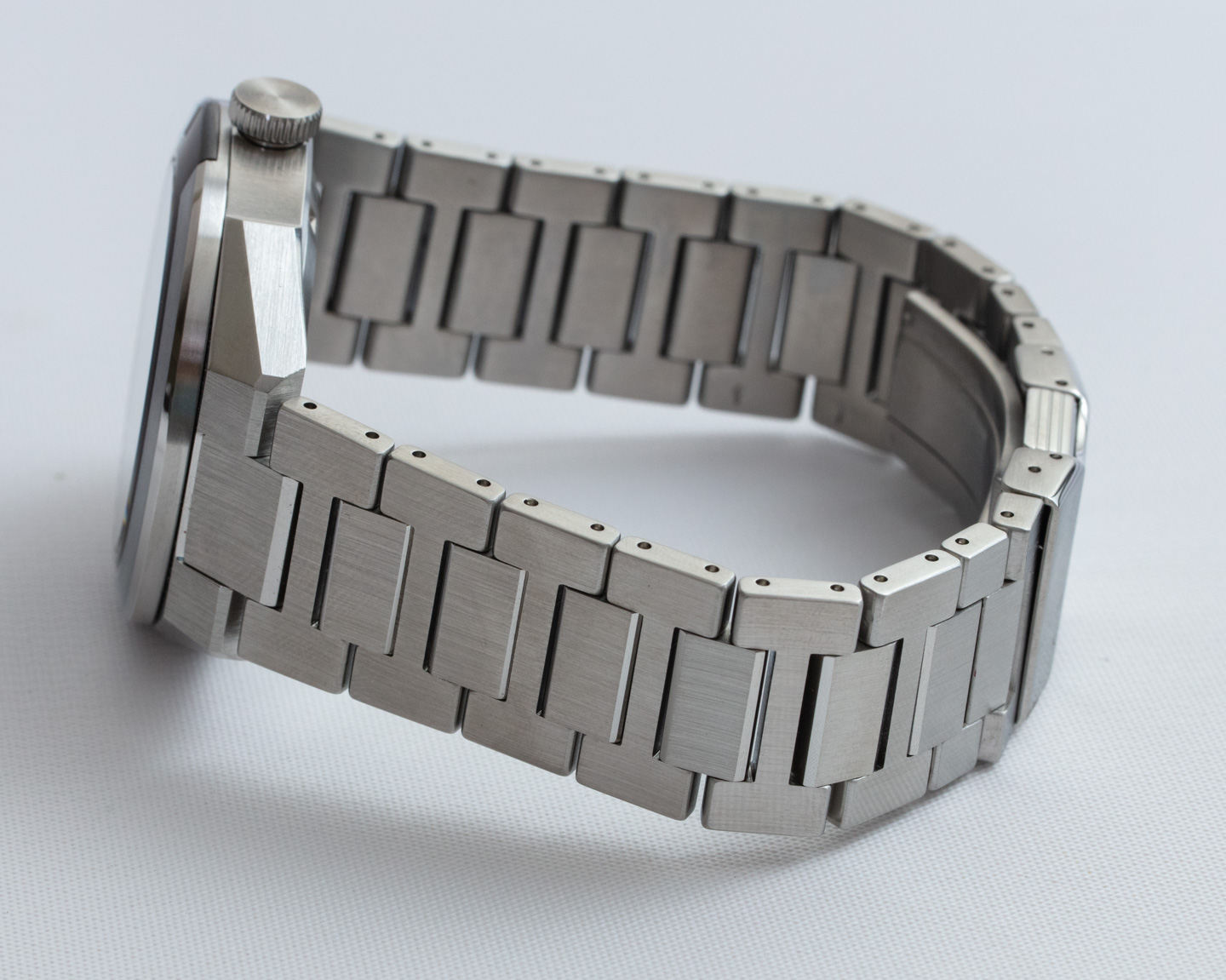 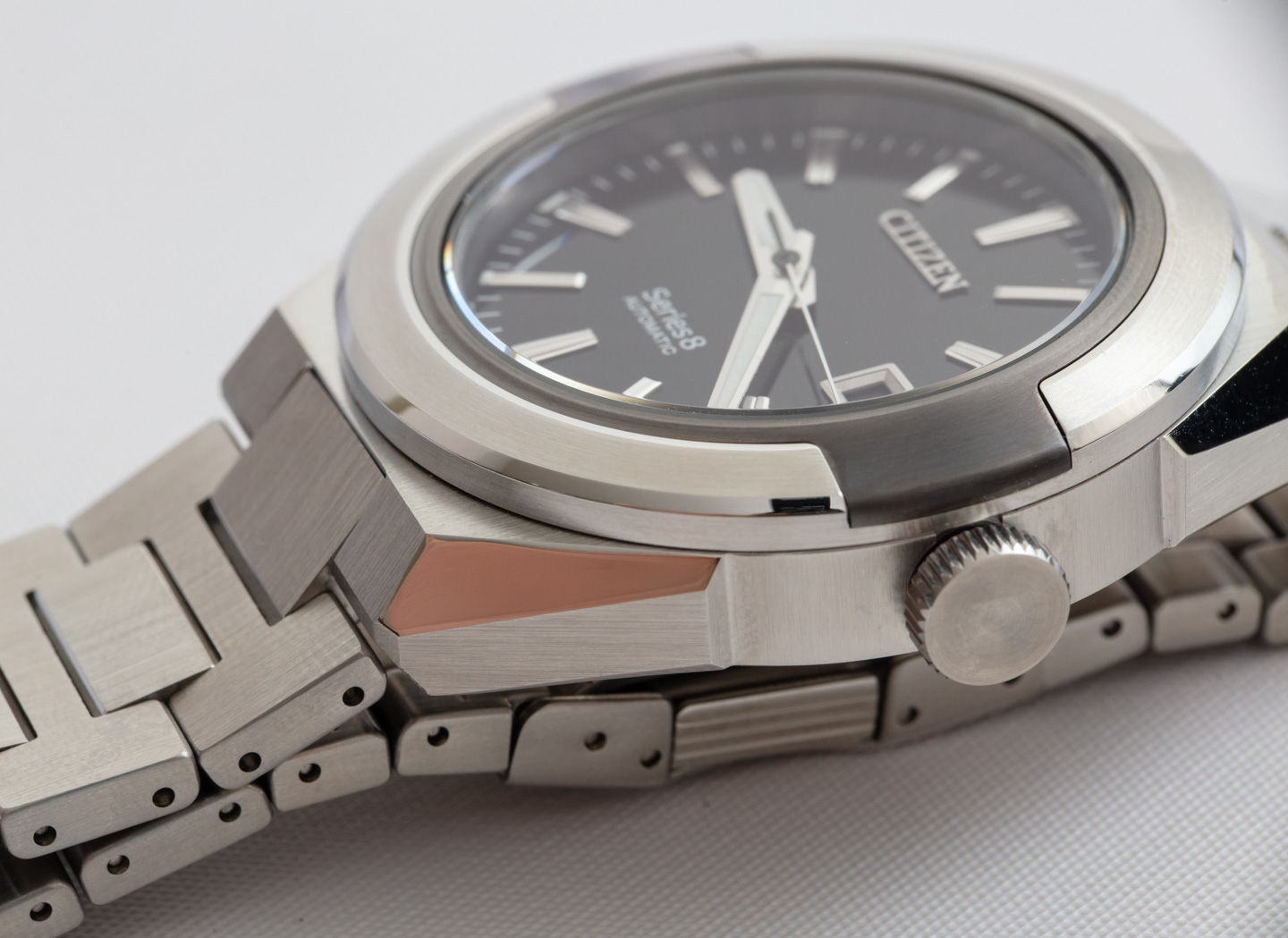 While the 40mm-wide steel case is dressy in overall profile and personality, its shape is rich with modern lines and sharp angles. The unique bezel construction is meant to eschew perceptions of what a dress watch can look like, and the use of a new mechanical movement is a statement to the world that Citizen now has something that is as good as what comes from Switzerland, not just similar-looking. Citizen (like Seiko) is presenting itself as an authentic horizontal competitor to equivalent European brands. This is a fundamental (and probably widely welcomed) shift in strategy from what was “less expensive than the Swiss, but similar in sensation and superior in reliability.”

The 100-meter water-resistant case is on the beefy side, but it goes with the theme and is still comfortable on the wrist as a dress watch. Once again, it is 40mm-wide, 10.9mm-thick, and has a lug-to-lug distance of about 48mm. Over the dial is a flat sapphire crystal with AR-coating on the inside, and the caseback is solid (sadly, there’s no view to the movement). Going back to the sapphire crystal, I found that it collected fingerprints rather easily. Since Citizen is a master of material coatings, I bet a finger grease-resistant sapphire crystal coating would be really appreciated by enthusiasts. 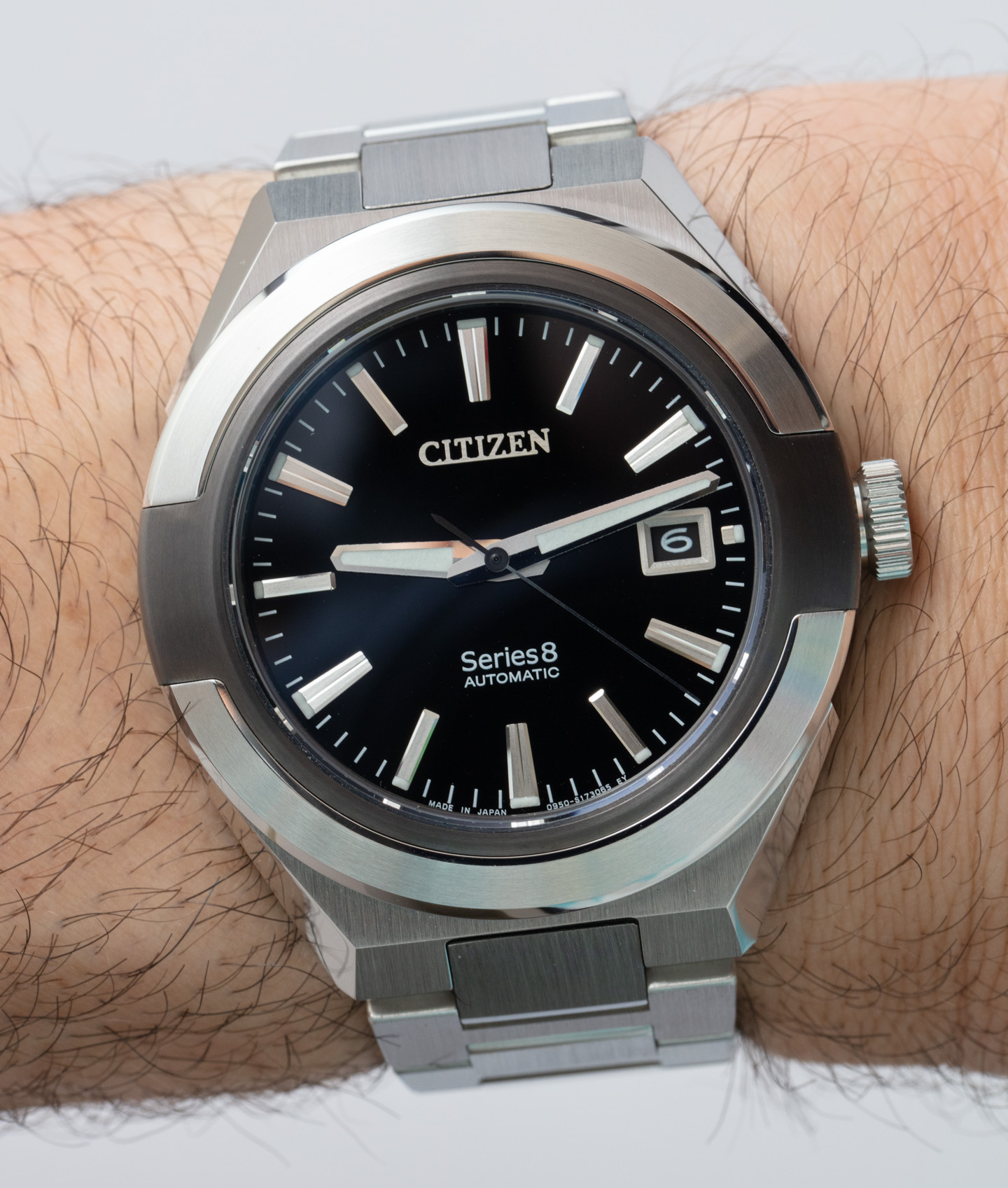 The Series 8 870 comes paired with a handsome-looking matching steel bracelet that has just of touch of taper to it. The flat, brushed H-style link design works but is not as original as the Series 8 870 case with its interesting side profile and two-piece bezel. The bracelet does, however, close with a relatively flush push-button deployant clasp. More so, I know that Citizen really wanted to keep it classy with the design, but I did find the spartan caseback design a bit lackluster. I appreciate that Citizen might want to keep exhibition windows for special models only (like the Calibre 0200), but I think consumers would like some visual hints as to what the Citizen designers had in mind when designing the 870 watch’s case.

The Series 8 870 dial is a masterful execution of what many people think of when they consider well-done Japanese wristwatch dials. It is classic but has modern elements, the least of which are in the design of the hands and hour markers. The dial is intentionally minimalized, with a focus not on extra design elements but rather on making each of the existing features on the dial as nice to look at as possible. This includes an excellent glossy finish for the face, and the nice contrast you get with the finely brushed and polished applied hour markers. The dial is also fully painted with luminant, but in a way that does not take away its appeal as an elegant formal timepiece. 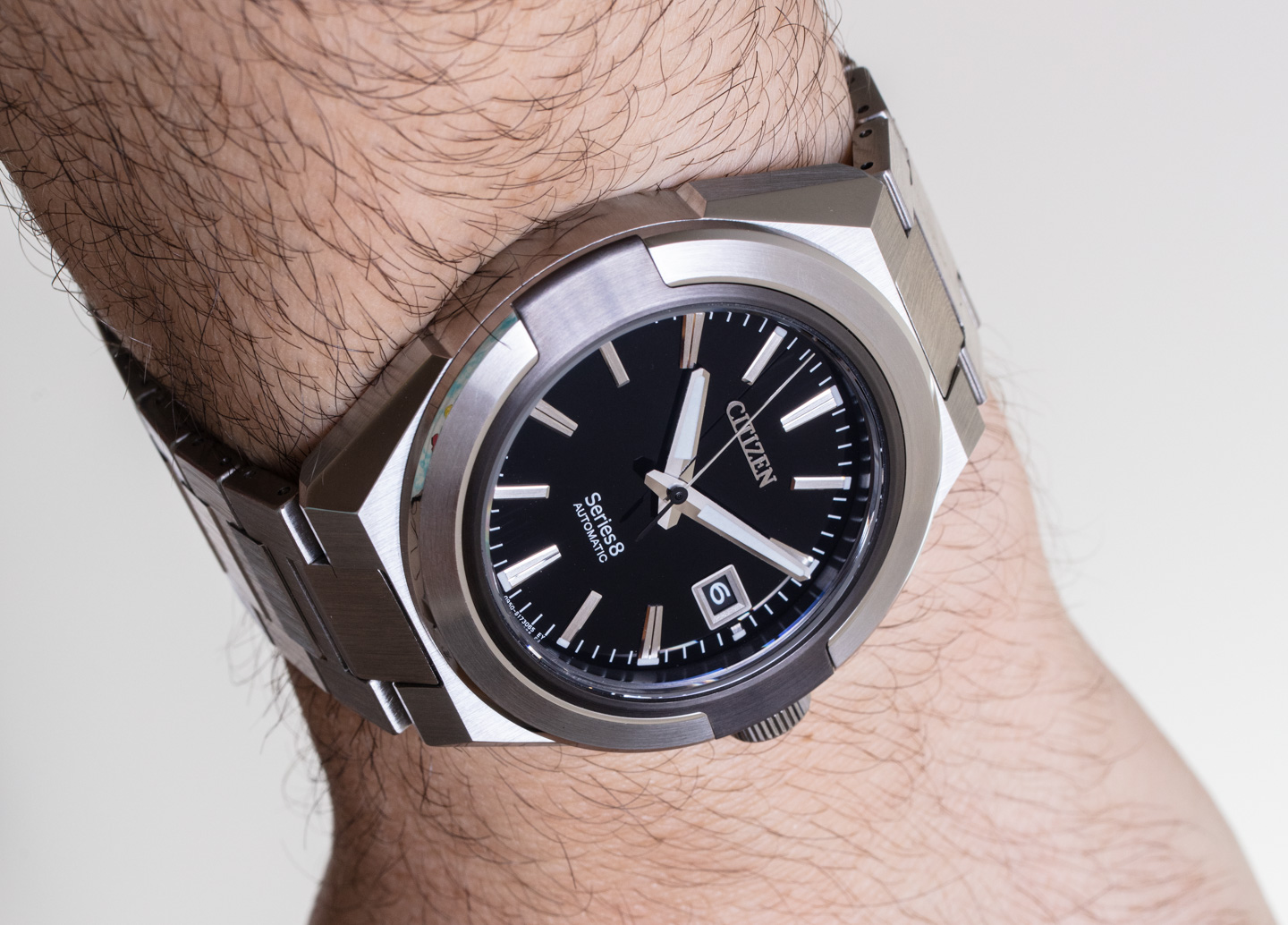 The dial features a window for the date, with a frame that matches the finishing of the hour markers. The dial is also a bit uncommon for having the actual name of the watch collection on it. Another interesting design element is how the second hand is two-tone. The counterweight is black to contrast the brushed steel tone of the majority of the hand. It makes for an interesting and extremely subtle effect.

Inside the 870 watch is the in-house-made Citizen caliber 0950 automatic movement that is actually being introduced in this watch for the first time. The movement is just 4.1mm-thick and is probably somewhat similar in architecture to the Miyota 9000 movement series, though I don’t think they are the same movement at all. For one thing, the Calibre 0950 has 50 hours of power reserve and operates at 4Hz. Winding it is a bit smoother than an ETA movement, and the overall operation is predictably refined. Citizen claims a -5/+10 seconds per day timing rate performance expectation for the Calibre 0950. These advertised numbers are typically on the worse side of actual performance, while these numbers are a lot more accurate in terms of performance expectations with many of the other Miyota movements. The tech specs are better for the Calibre 0200 movement, but the 0950 is nothing to scoff at — and bests a lot of the competition at this price point. I just wish some of it was visible since wearers can only imagine what it looks like (the movement does have decoration on it, by the way). Finally, Citizen claims the caliber 0950 “provides enhanced magnetic resistance,” implying that there is an impressive level of magnetic resistance in the movement without the need for special shielding. 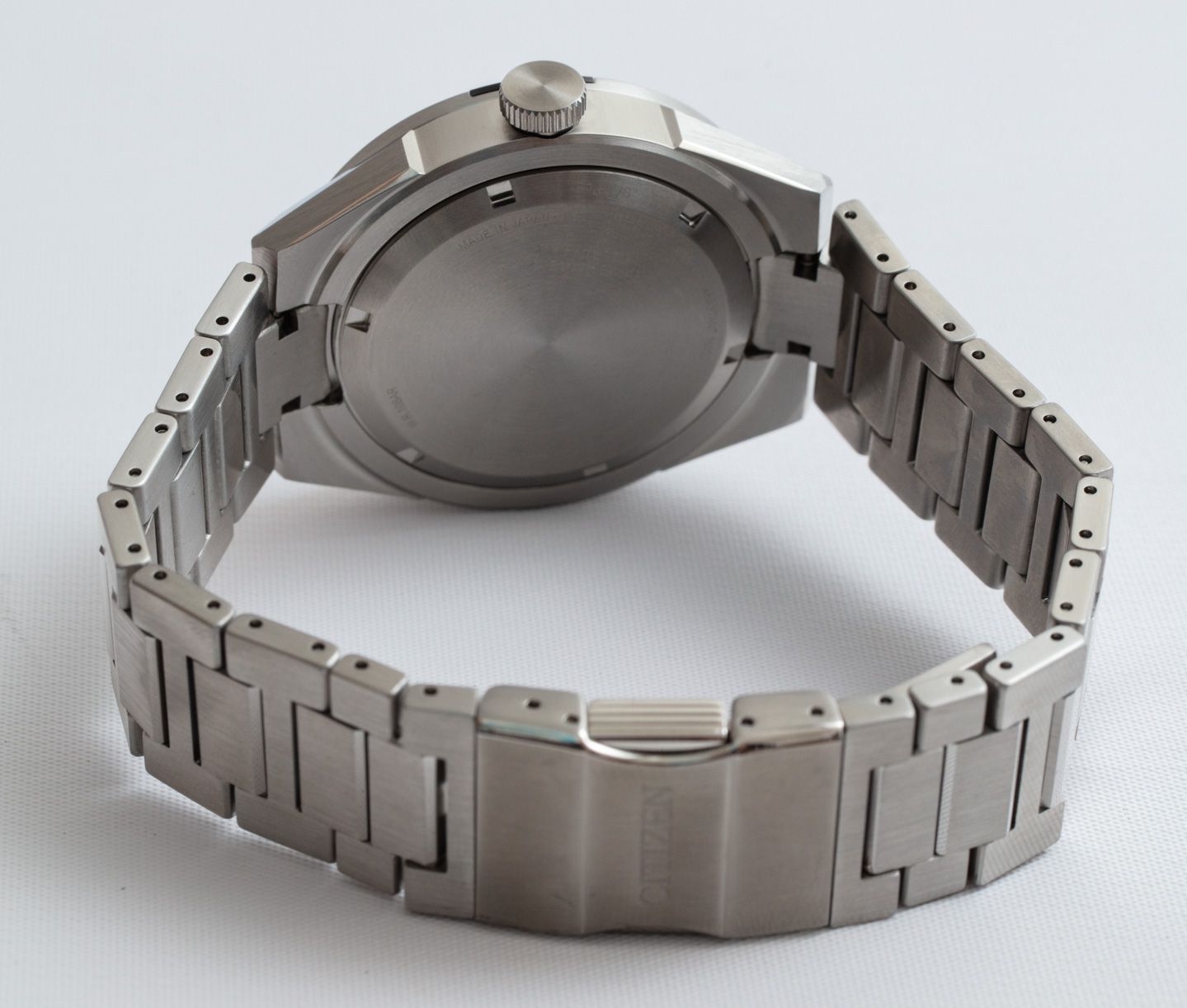 With the Series 8 870 watch collection, Citizen makes a bold statement to the rest of the watch industry, and a compelling value proposition to consumers. On the one hand, the name to beat right now in high-end Japanese watches in Grand Seiko. Citizen has all the brand might and heritage to have a suitable competitor, and it is moving in that direction. The Calibre 0200 tries to match Grand Seiko toe-to-toe, while the Series 8 is a more mainstream response to high-end Seiko given the appreciably lower price point. The Series 8 is really meant to compete with high-end Seiko dress watches but ends up offering something closer to a “Grand Citizen” experience (as opposed to just being a fancy suit watch). 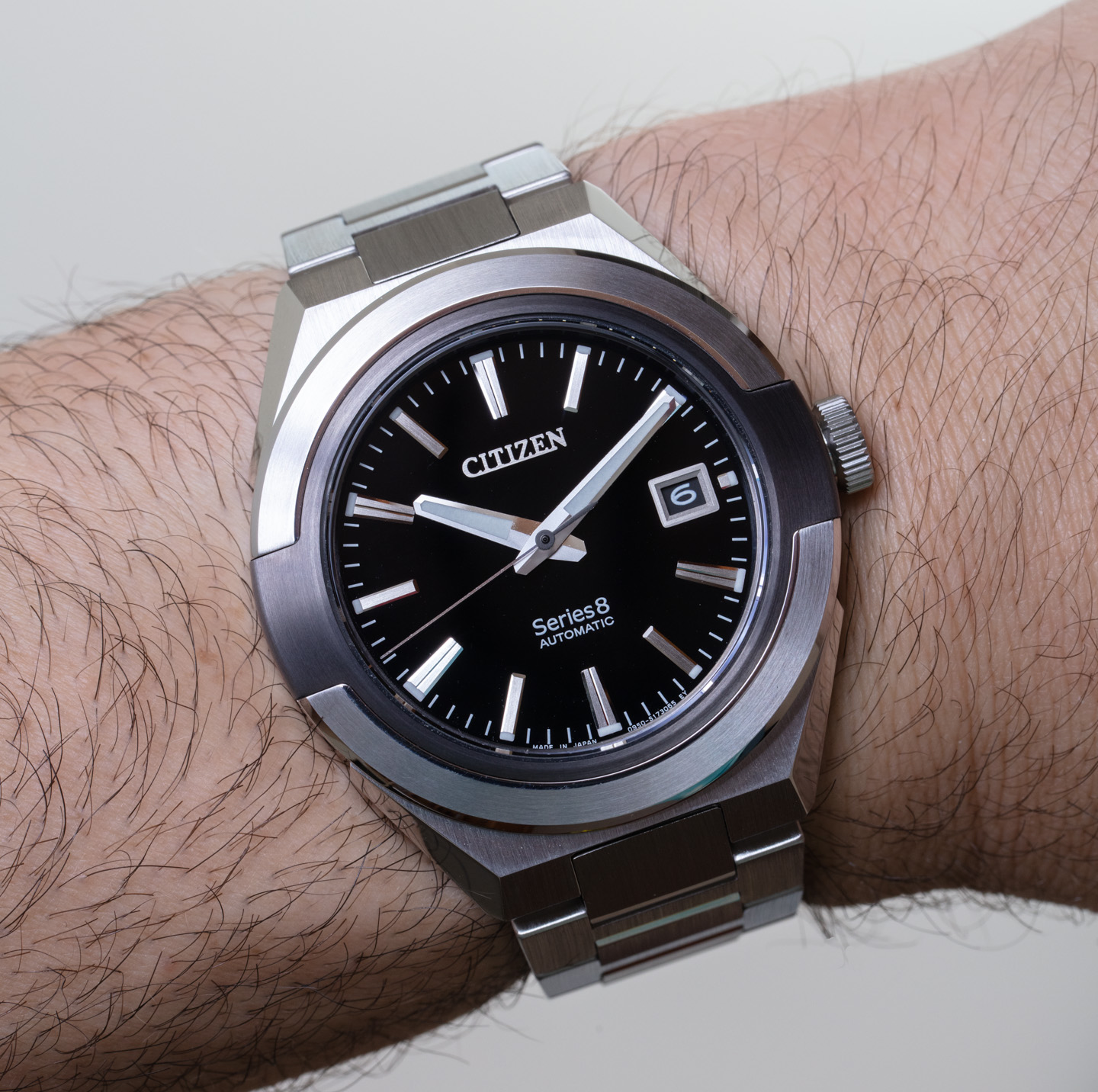 Citizen has tried to enter this price category for years — especially in the United States — with a number of really cool products ported over from Japan. Unfortunately, many items, such as the Citizen Campanola in the Citizen Signature collection, never really took off too much outside Japan. With the Series 8, Citizen tries something in this price category by offering a mechanical watch. Most of its previous attempts had been with high-end quartz watches. While high-end quartz will have its mainstream heyday, Citizen was, unfortunately, a bit ahead of the times with many of its high-end quartz watch offerings when they originally debuted. For now, much of the traditional watch community is still enamored with all things “mechanical.”

So here it is, the proudly Japanese and thoroughly contemporary go-anywhere dress watch from Citizen in the form of the Series 8. Well-funded collectors will be able to pick up the Calibre 0200, but for many people, that much pricier model will be overkill. The Series 8 870 offers a traditional high-end Japanese watch experience designed for an international market and at a fair-feeling price. Citizen can certainly get more exciting with colors and decoration in the future, but as soon as I wore the Series 8 870 on my wrist for the first time, I immediately knew this product family needs to be in Citizen’s collection for quite a while. Price for the Citizen Series 8 870 reference NA1004-87E watch is $2,000 USD. Learn more at the Citizen watches website here.