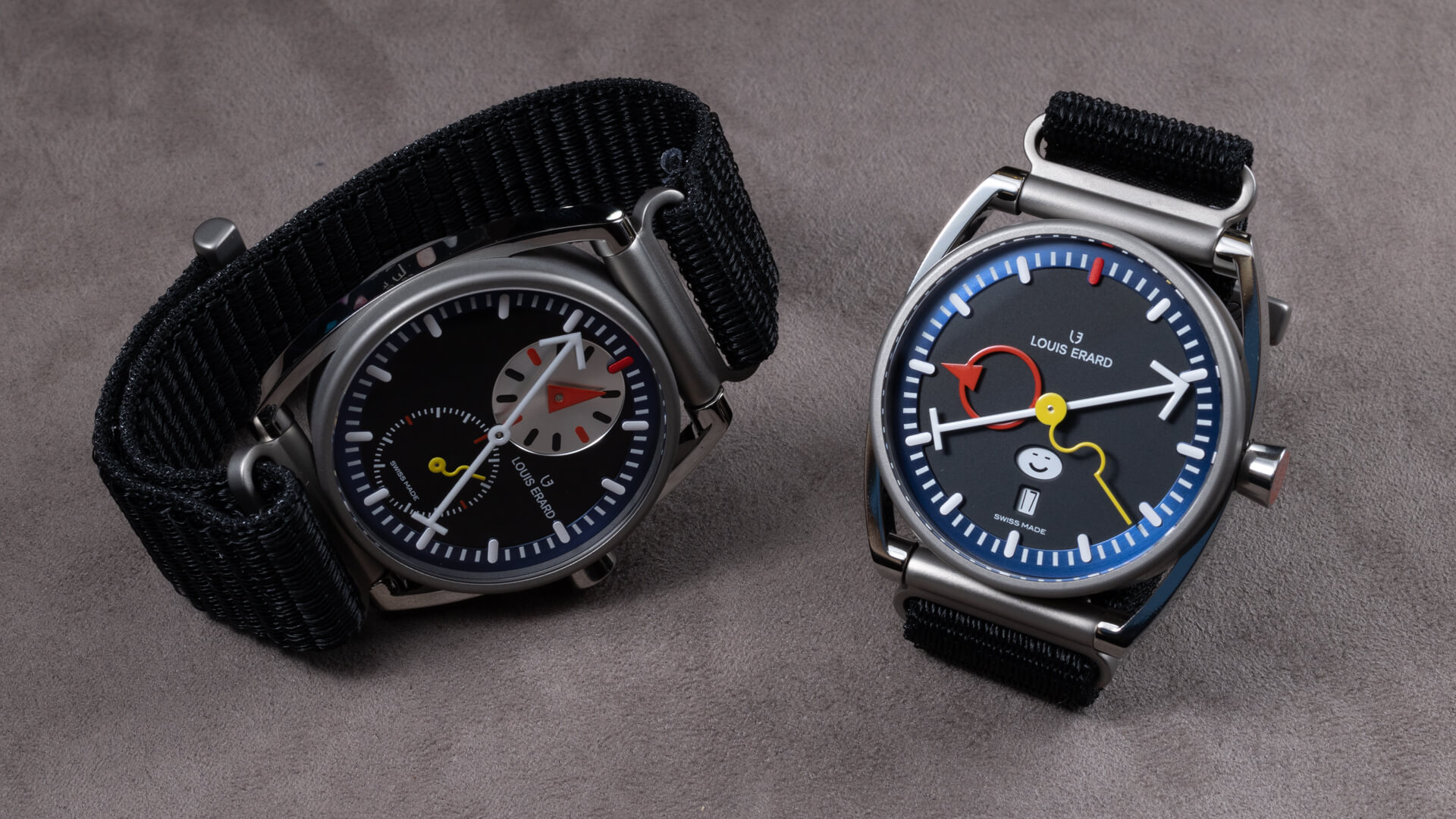 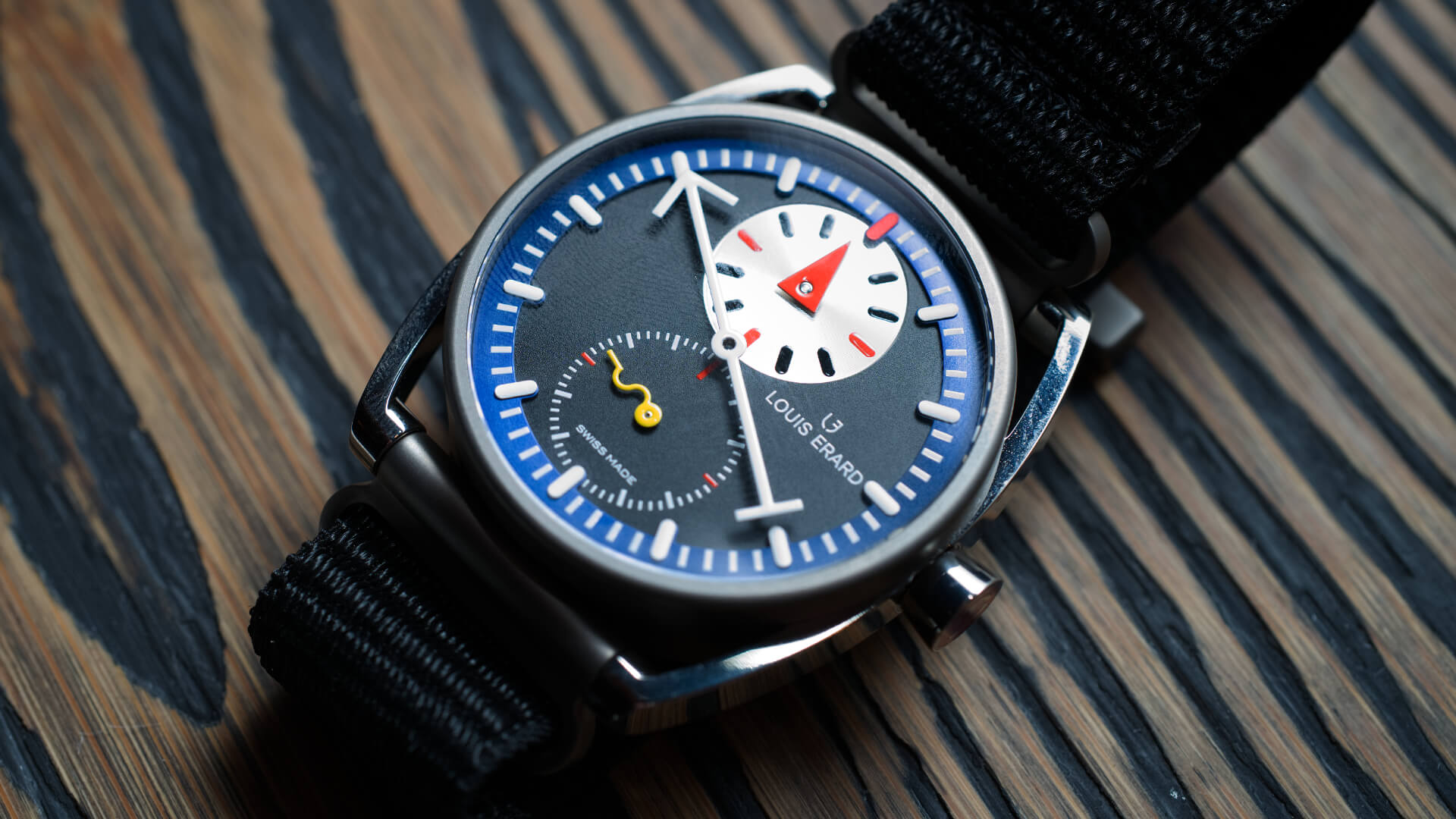 You’d be forgiven for thinking that all Louis Erard does is collaborations, and maybe even for thinking that all the brand does is collaborations with Alain Silberstein. The watches that have emerged from that partnership are certainly some of the brand’s most popular (or at least the most talked about), and for good reason. Silberstein’s zany designs and Louis Erard’s brand-defining regulators make for an exciting combination that frankly isn’t seen elsewhere. Together, the two have produced no fewer than eight watches across four models (all instant sellouts) with the most recent being the La Semaine Blanche from earlier this year. But now a third party has nudged its way in: California fine jewelry and watch retailer Stephen Silver. Already an authorized dealer for Louis Erard, the Menlo Park timepiece salon put its own twist on two models, La Semaine and Le Régulateur, for the Louis Erard x Alain Silberstein for Stephen Silver Watches and Diptych Watch Sets. 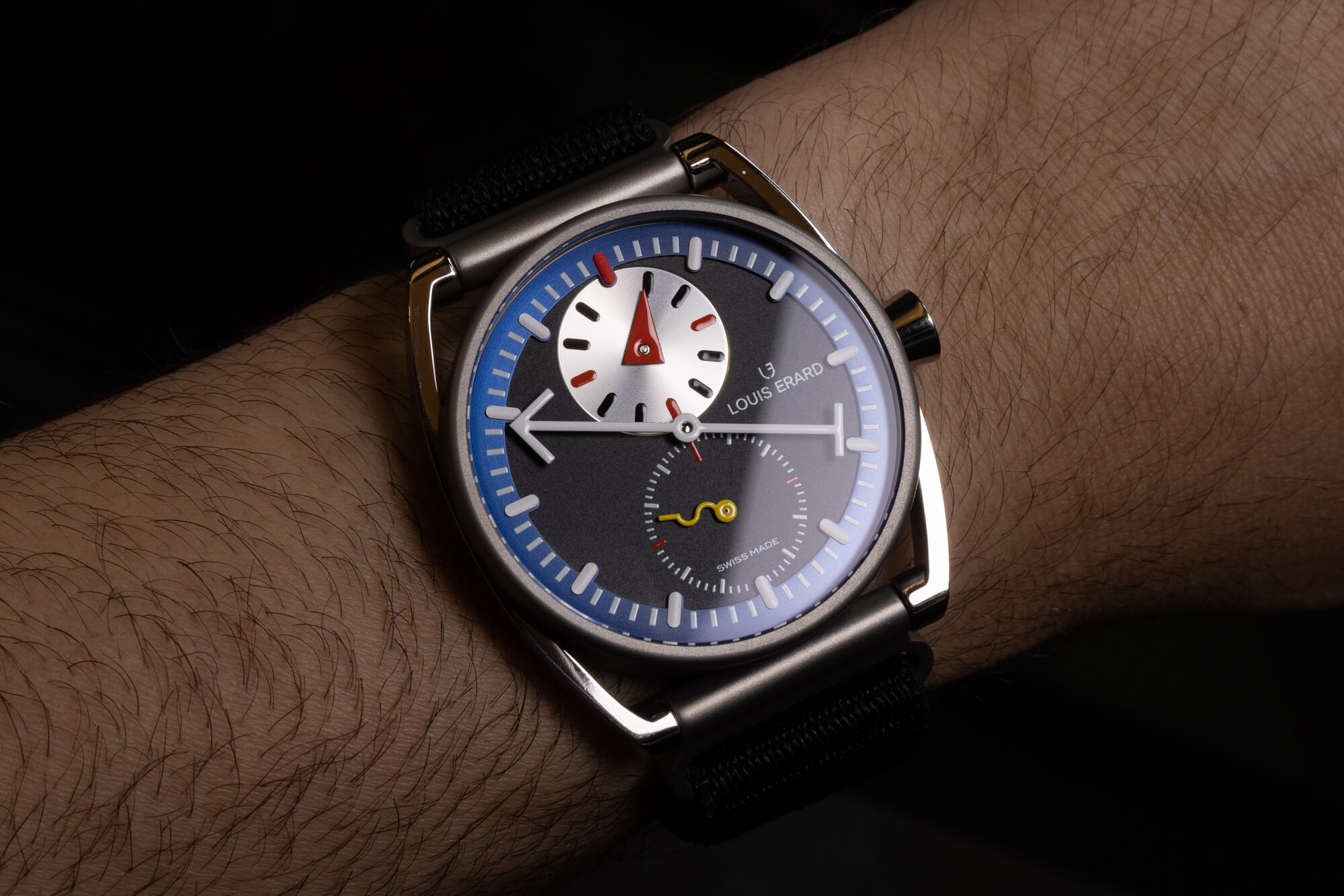 Let me start out with the boring bits that are not at all boring. The 40mm case hasn’t been changed except for one very small addition that’s not visible on wrist that I’ll mention later. For review: the unique design takes a blocky tonneau silhouette and turns it into something decidedly new and modern. The raised, micro-blasted central case is fashioned from grade 2 titanium around a flat, AR-coated sapphire crystal, while the vertical sidebars that the brand calls “brancards” are polished grade 5 titanium. The result is a pair of lightweight watches that, at 11.6mm thick and 47mm lug-to-lug sit surprisingly well on the wrist. I say surprisingly well because there is almost no curvature to the case itself, meaning it’s just a flat block of metal on your wrist. Any longer and it’d be an untenable wrist proposition, but with the somewhat modest proportions, it manages to pull itself off. 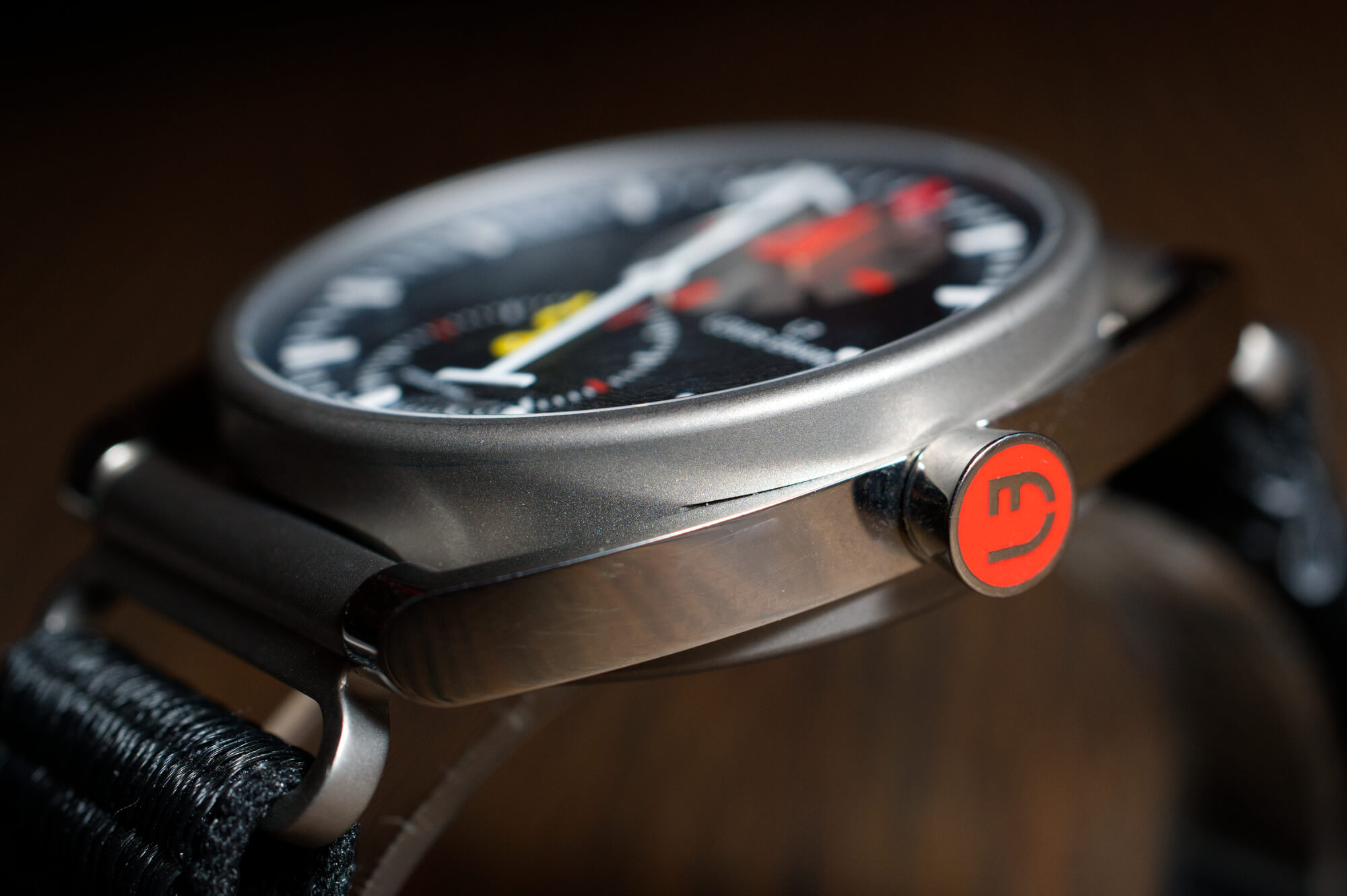 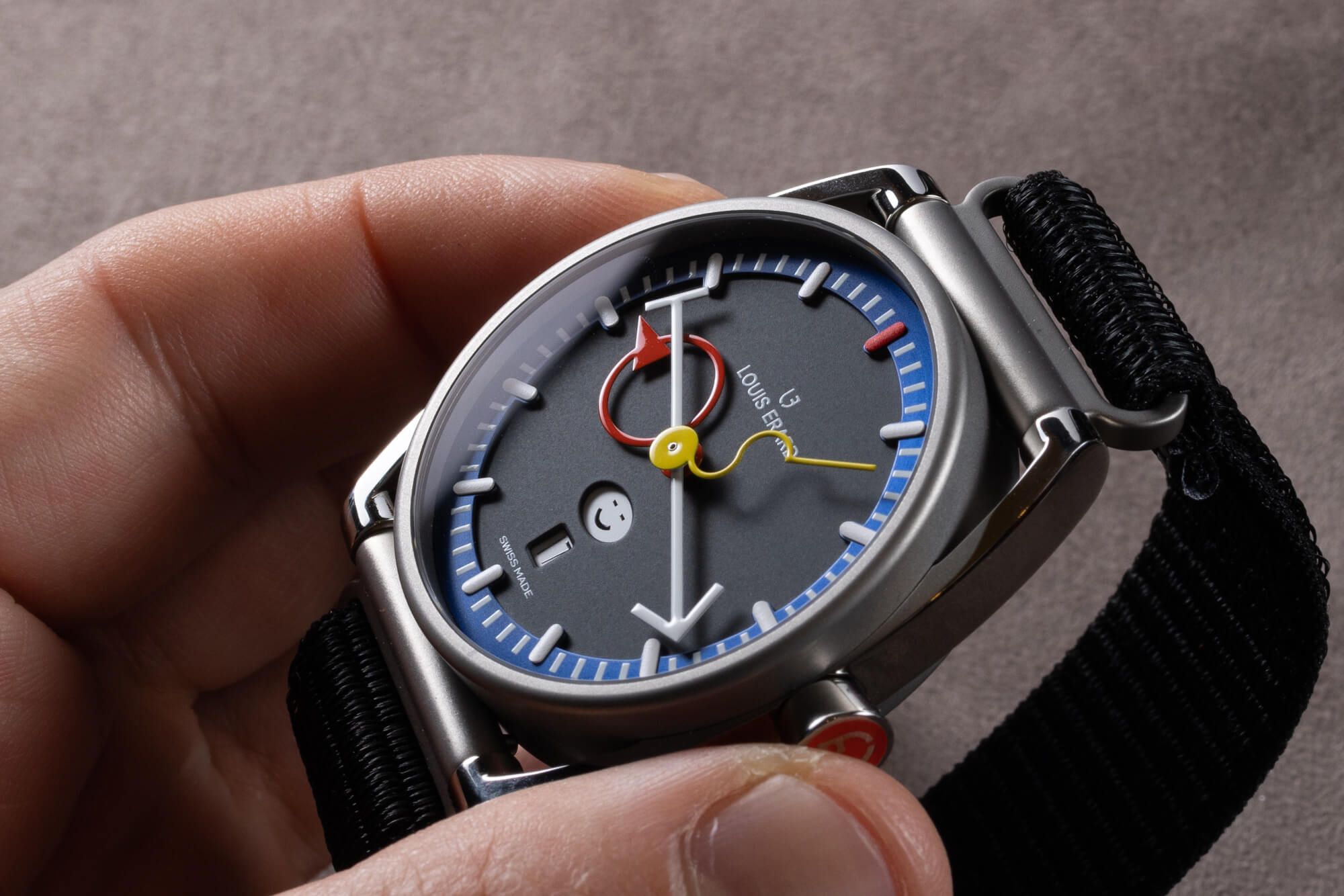 Part of the wearability owes to the very comfortable nylon hook-and-loop strap. It’s exceptionally light and connects via two grade 2 titanium endlinks matched to the central case. They both feature quick-release pins so you can swap out for the strap of your choice, though anything too chunky would run the risk of ruining the lines of the watch and how it wears. Rounding out the case is the rather prominent polished pull-out crown, with the lacquered red cap featuring the Louis Erard logo. The watch features an impressive-for-the-style 100m water resistance. While I can’t imagine planning to do anything aquatic with either of these watches, the water resistance and the nylon strap would certainly make me comfortable doing so if I were suddenly taken up by the urge to plunge into the sea. 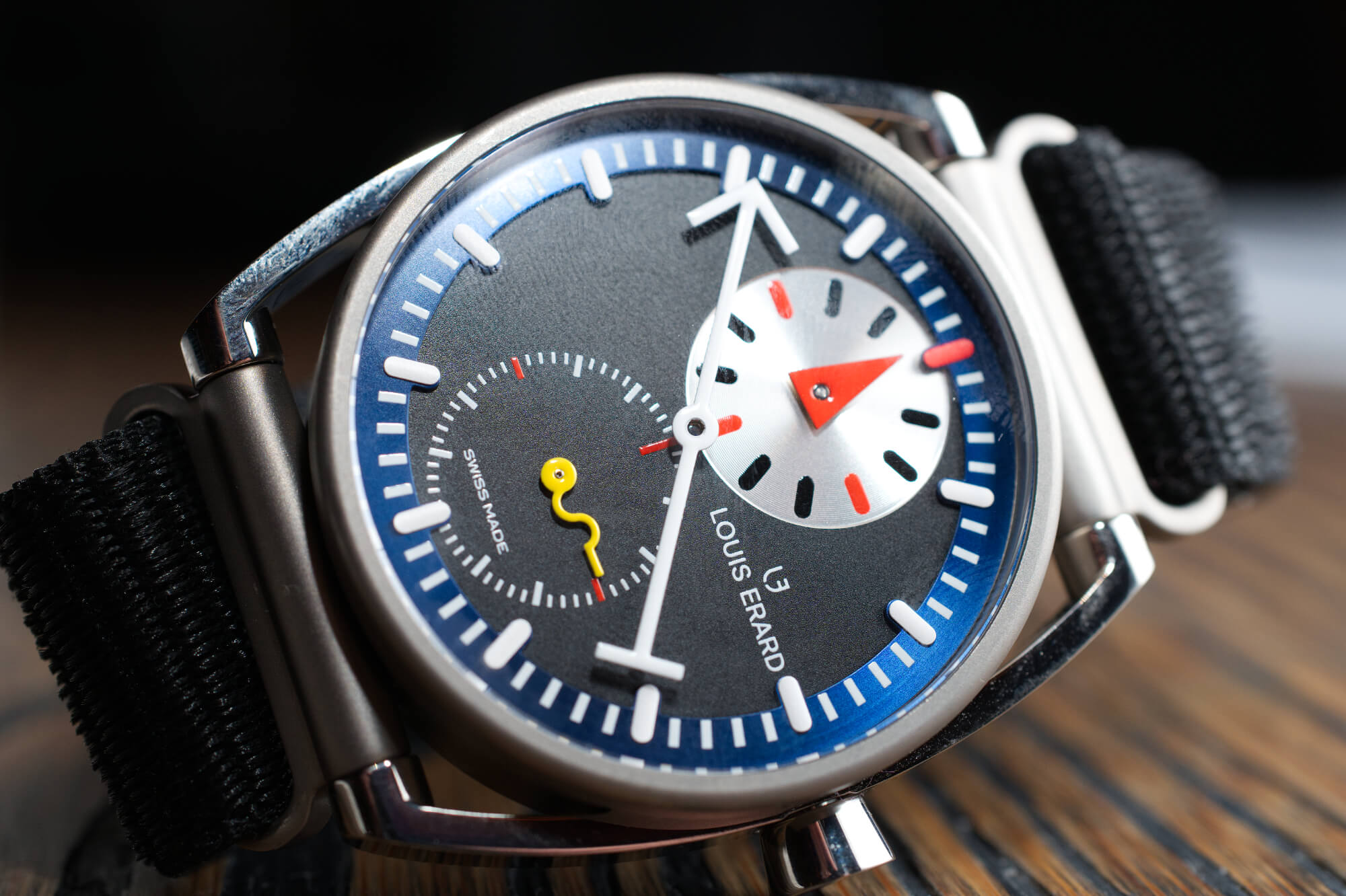 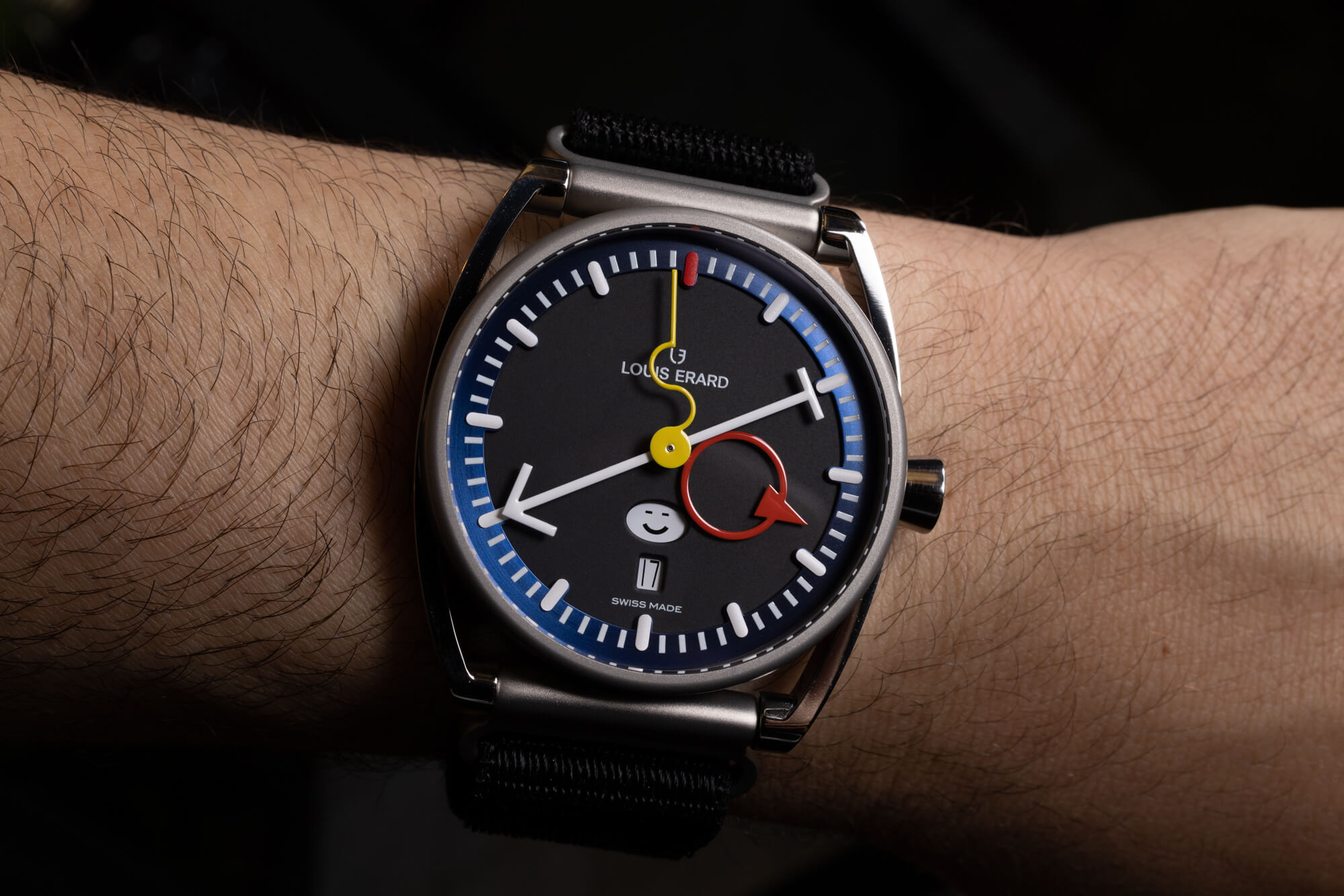 If you’re familiar with the two models at hand, you may need to squint to see the difference. At a glance, they’re easy to miss. The eponymous Silvers knew not to mess too much with a good thing, so all we’re dealing with on the dials of these special editions is some color changes. You’ll notice on both watches that the peripheral flange has been recolored with brushed blue base, and the hour markers have been changed from yellow to white. Even more subtle, the hashes at 3 and 9 on the subdial of the Le Régulateur have been changed to red. Finally, the lacquered handset has been updated with a white (instead of blue) minute hand. Everything else remains unchanged. The Le Régulateur maintains its blend of azurage and matte finishes to complement the brushed flange, and the La Semaine keeps its date window and the utterly charming “smiledays” display, which shows a different smiley face in place of each weekday. 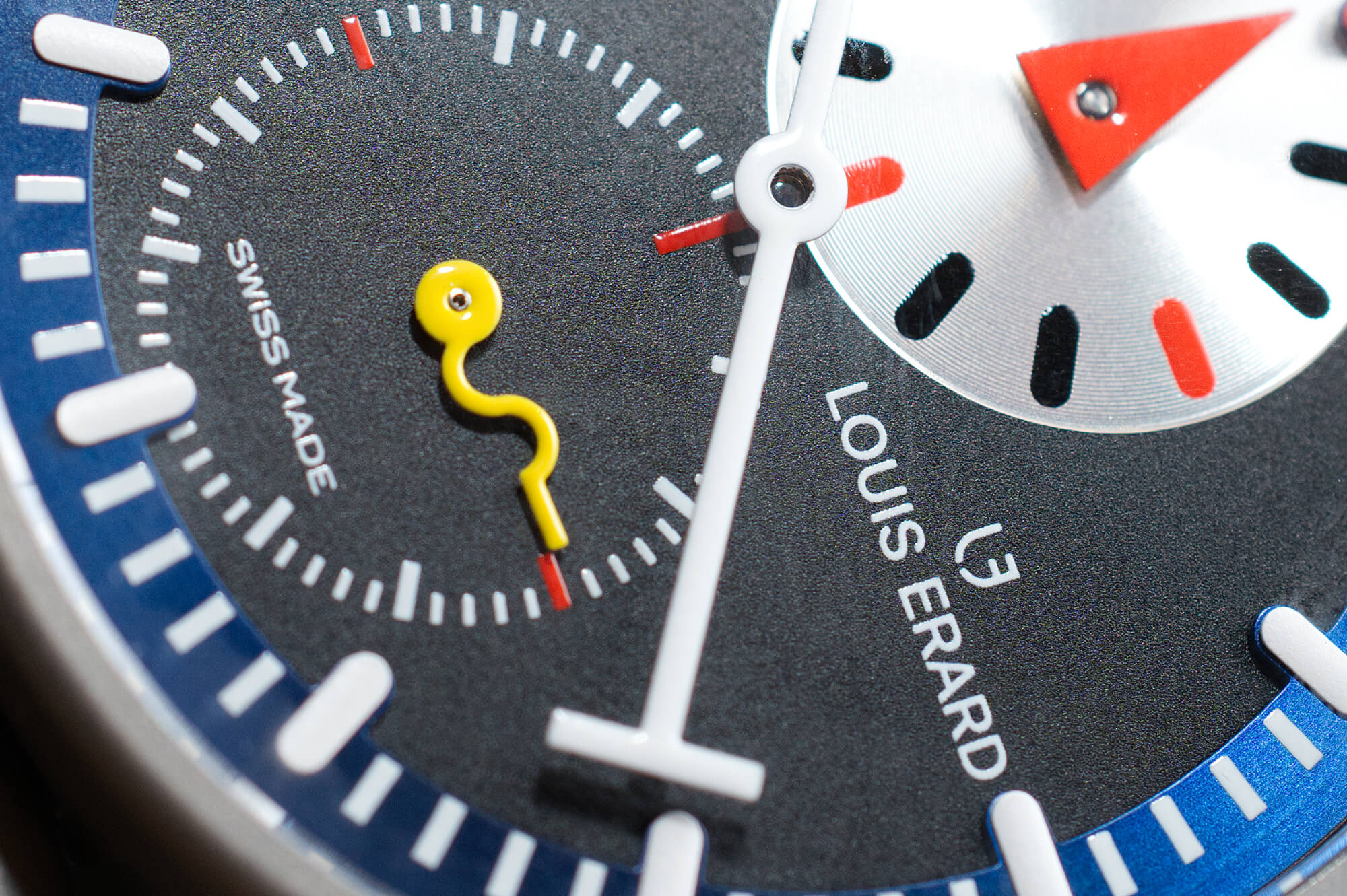 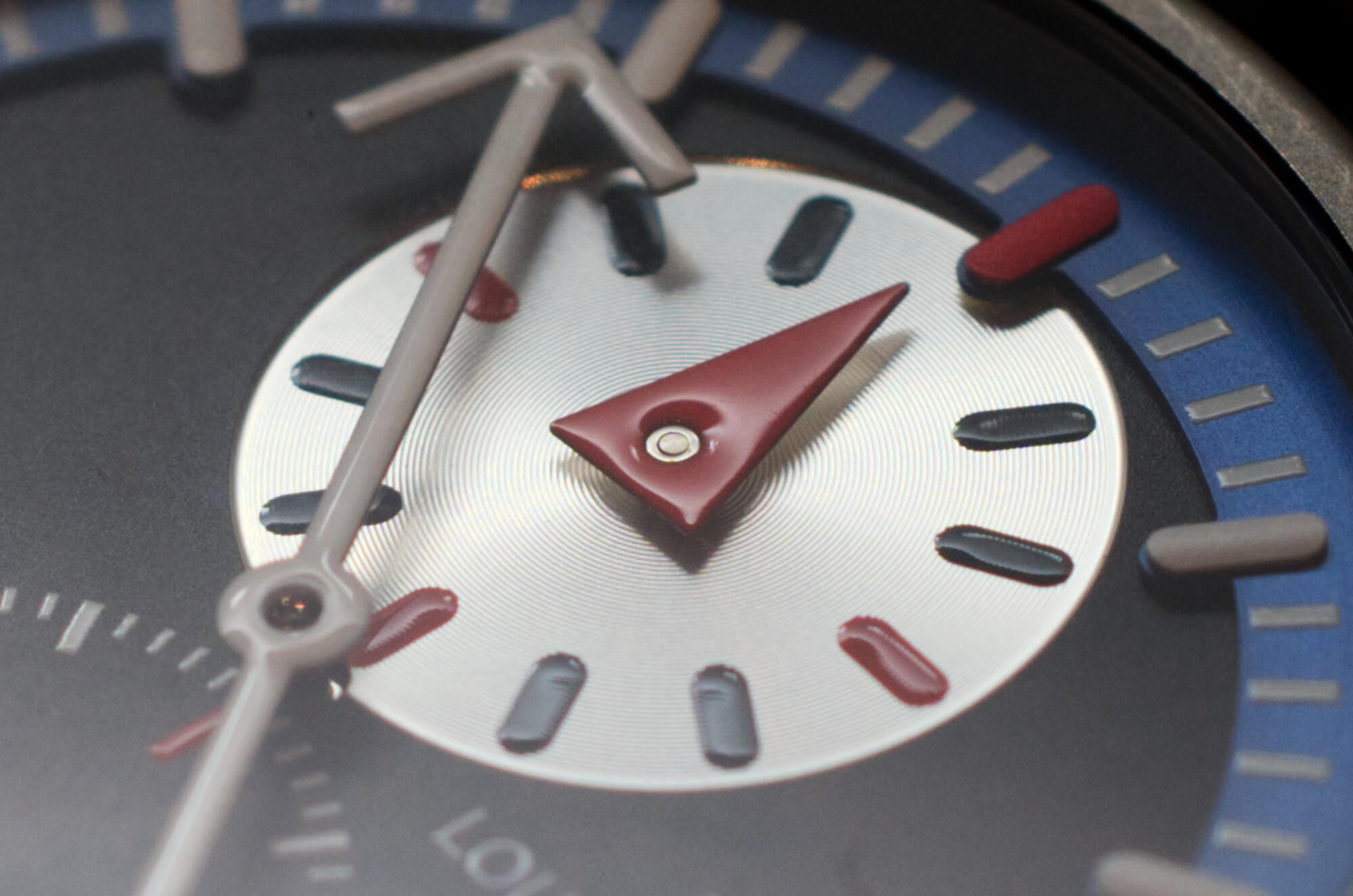 The result of these changes is one of refinement and shifts in attention. Alain Silberstein’s DNA is still here in full force, but the yellow and red accents are now allowed to pop more simply by dint of there being less red and yellow. Instead of fighting with those colors, blue is made a foundational color with the black and white, blending into the background and ceding center stage to the whimsical handset. What’s nice here, too, is the consistency across models. If purchased in the special diptych box set, you could alternate between the two without missing a beat: on both watches, the hour is indicated by a red triangle, the minutes by a wavy line, and the seconds by a white arrow. To be sure, the watches take a few wears to get used to. Most people aren’t used to reading a regulator watch, and even on the La Semaine, the long minute hand can throw you off when reading the time at a glance. 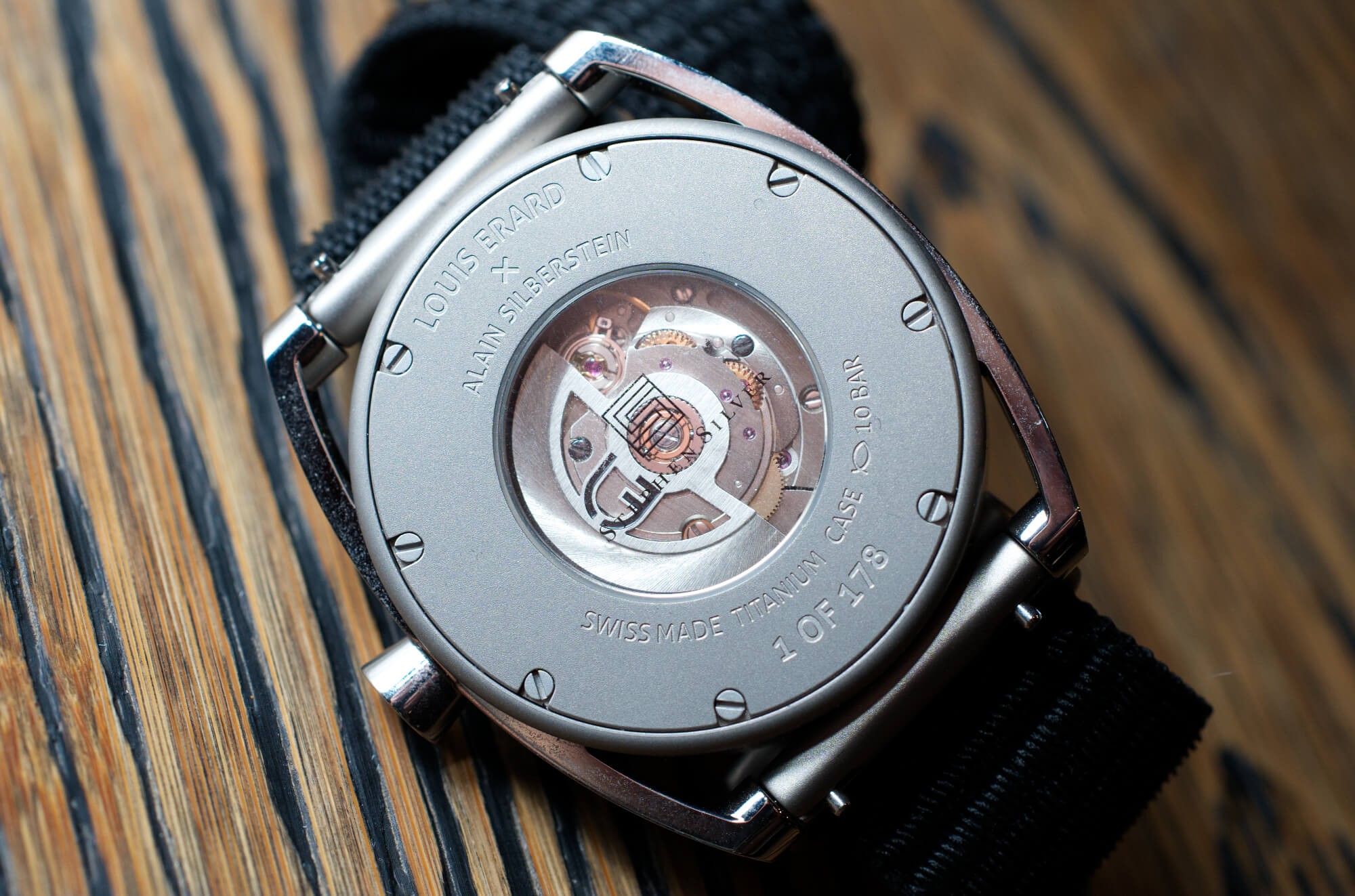 Both watches are powered by Sellita movements: the 26-jewel SW220-1 for the smiley-date La Semaine and the 31-jewel SW266-1 for the Le Régulateur. Both movements run at 28,800 vph and have a power reserve of 38 hours (which, if I’m being honest, is a bit low these days). Both movements are élaboré grade with custom rotors but little else to be seen through the sapphire caseback window. That window, though, is where we see the final change to these watches: the Stephen Silver logo. (The caseback seen here isn’t final, as evidenced by the “1 of 178” from a prior edition; the production casebacks will have accurate numbering). I wish there was a bit more prominence given to the three-way partnership. There’s plenty of room on the titanium caseback to have “Louis Erard x Alain Silberstein x Stephen Silver” arcing, but instead, the retailer has been relegated to a hard-to-see printing on the sapphire window. I’d even take a solid caseback with the Stephen Silver logo on the middle over this. What this does accurately represent, I suppose, is the weight of contribution. Louis Erard is making these watches, Alain Silberstein has designed them, and Stephen Silver has really just come in and made a few adjustments. 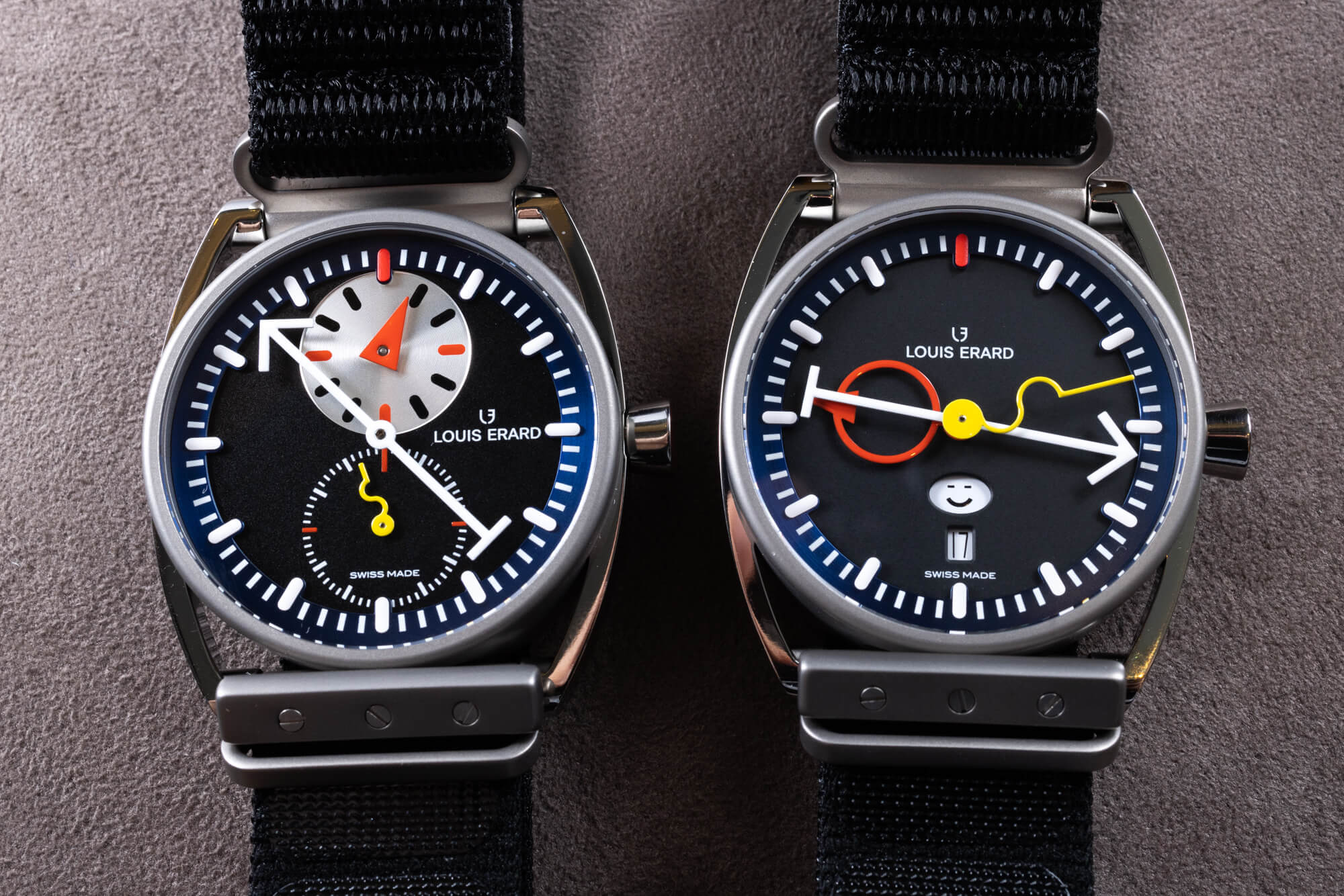 Most collaborations end up pushing limits, stretching a brand in ways it’s not accustomed to. One of the wonderful things about collaborations is how they offer the chance for a brand to do things it normally wouldn’t. But what about when a third party comes to the table after Alain Silberstein has already been there for a few years? How do you push the limits of an Alain Silberstein watch? The answer, as seen here, is that you don’t. What Stephen Silver has done instead is to make small changes that allow Silberstein’s aesthetic to stand out while simultaneously making the watches a touch more elegant. The Louis Erard x Alain Silberstein for Stephen Silver La Semaine is priced at $4,590 USD and limited to 72 pieces. The Louis Erard x Alain Silberstein for Stephen Silver Le Régulateur is only available directly from Stephen Silver, in a special diptych box set with the La Semaine model; the set retails for $8,888 USD and is limited to 28 sets. (That’s to say, you can’t buy the Le Régulateur alone, and there are 28 additional La Semaines that will be included in the sets.) For more information, please visit the brand’s website.