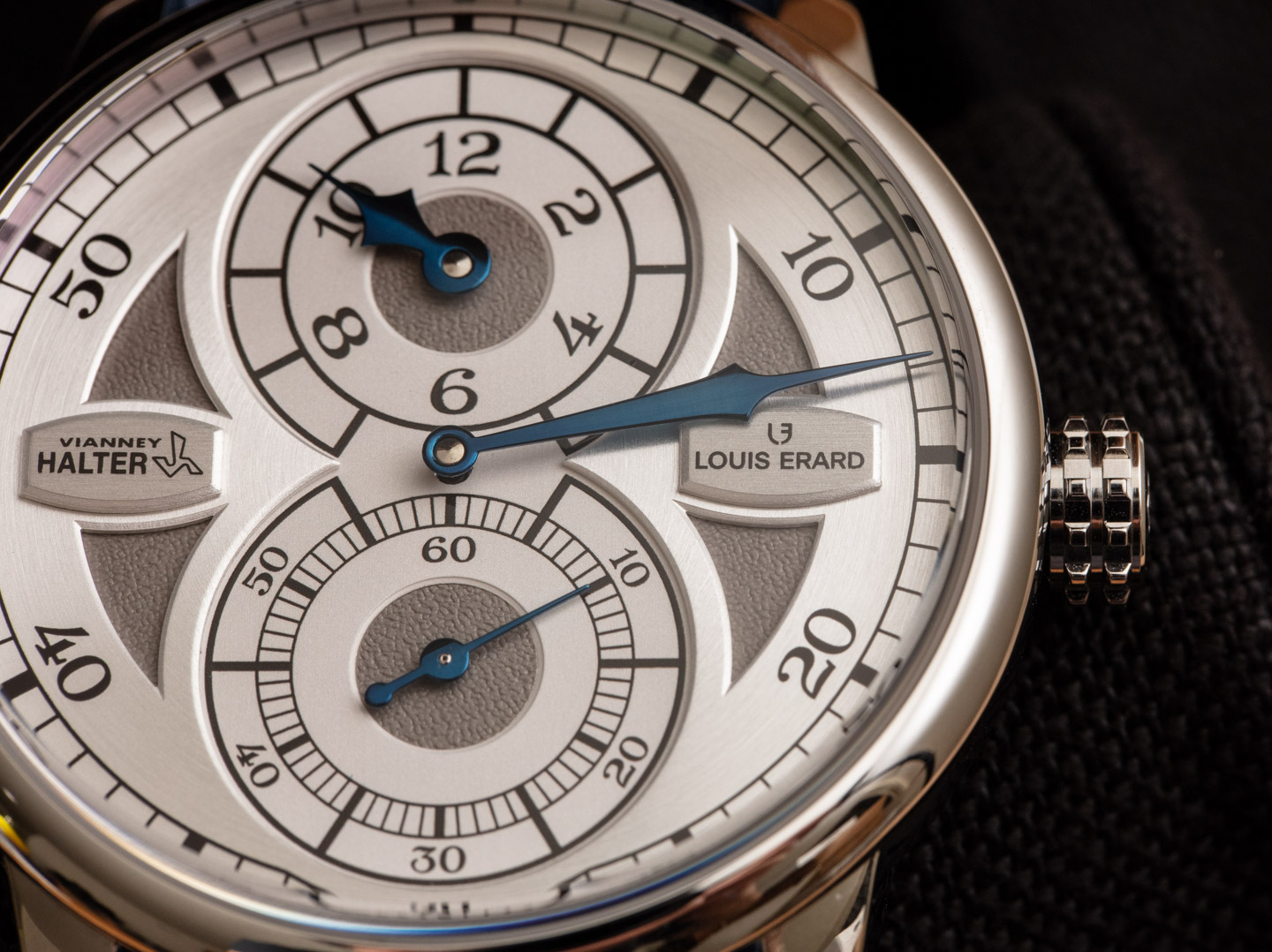 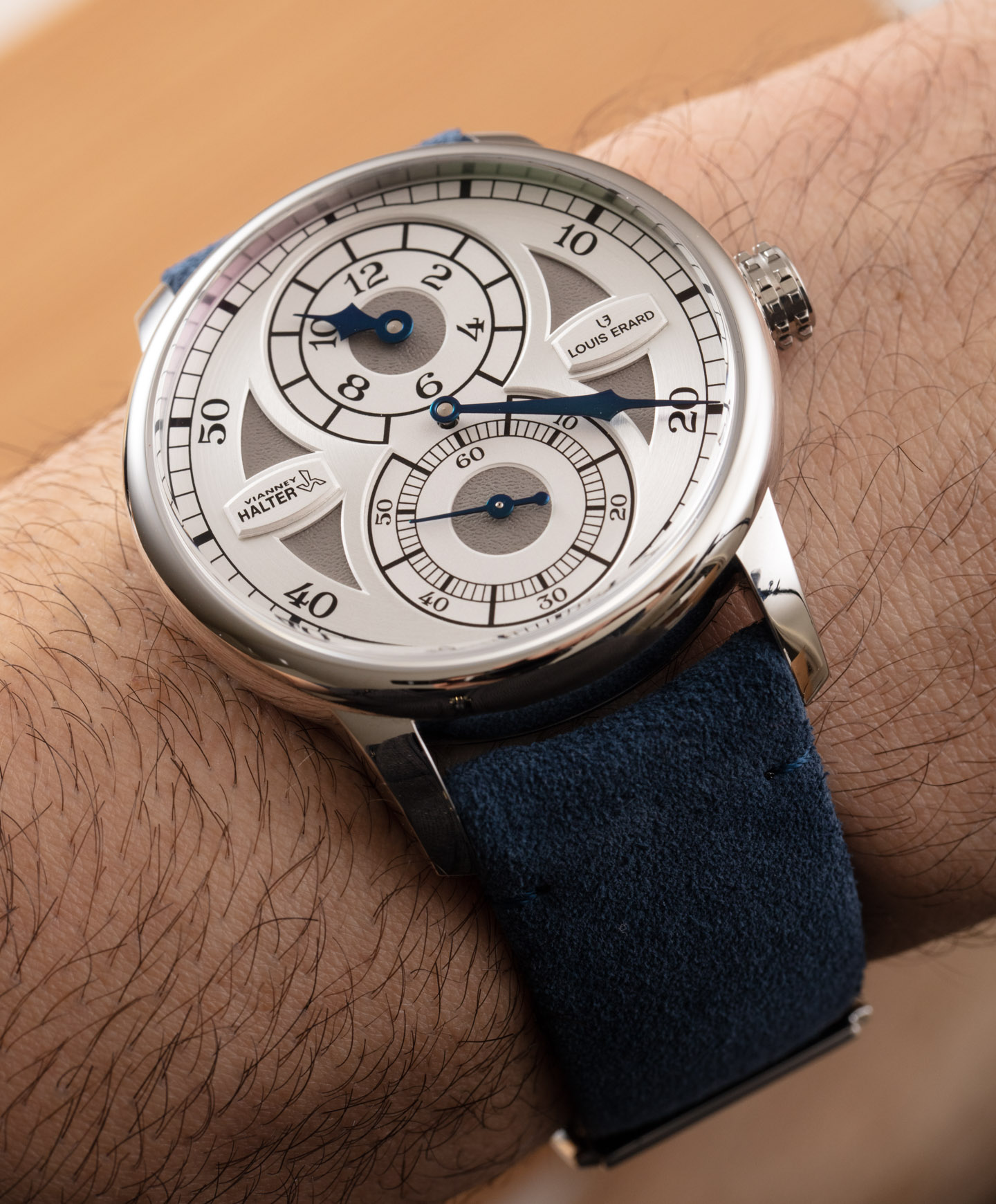 Following up the Louis Erard x Alain Silberstein Regulator watch comes the second major “collaboration” watch by Swiss watchmaker Louis Erard. This time, the design collaboration is with cult horology watchmaker Mr. Vianney Halter, and the result is just as well-conceived as the first exercise of this intelligent new watch design marketing formula.

It is very much the case that most people who know about Vianney Halter products cannot afford one let alone find the one they want. Ahead of his time (as many creative people in the watch space seem to be), Vianney Halter’s real career began when he created his own eponymous brand. His name went a bit more watch-space mainstream when he was chosen by Max Busser to be the third “Opus” watch collaborator at Harry Winston in the early 2000s. The Harry Winston Opus 3 remains among the most lovely — if difficult to produce — watches out of the Max Busser (who later went on to found MB&F) Opus collection at Harry Winston. 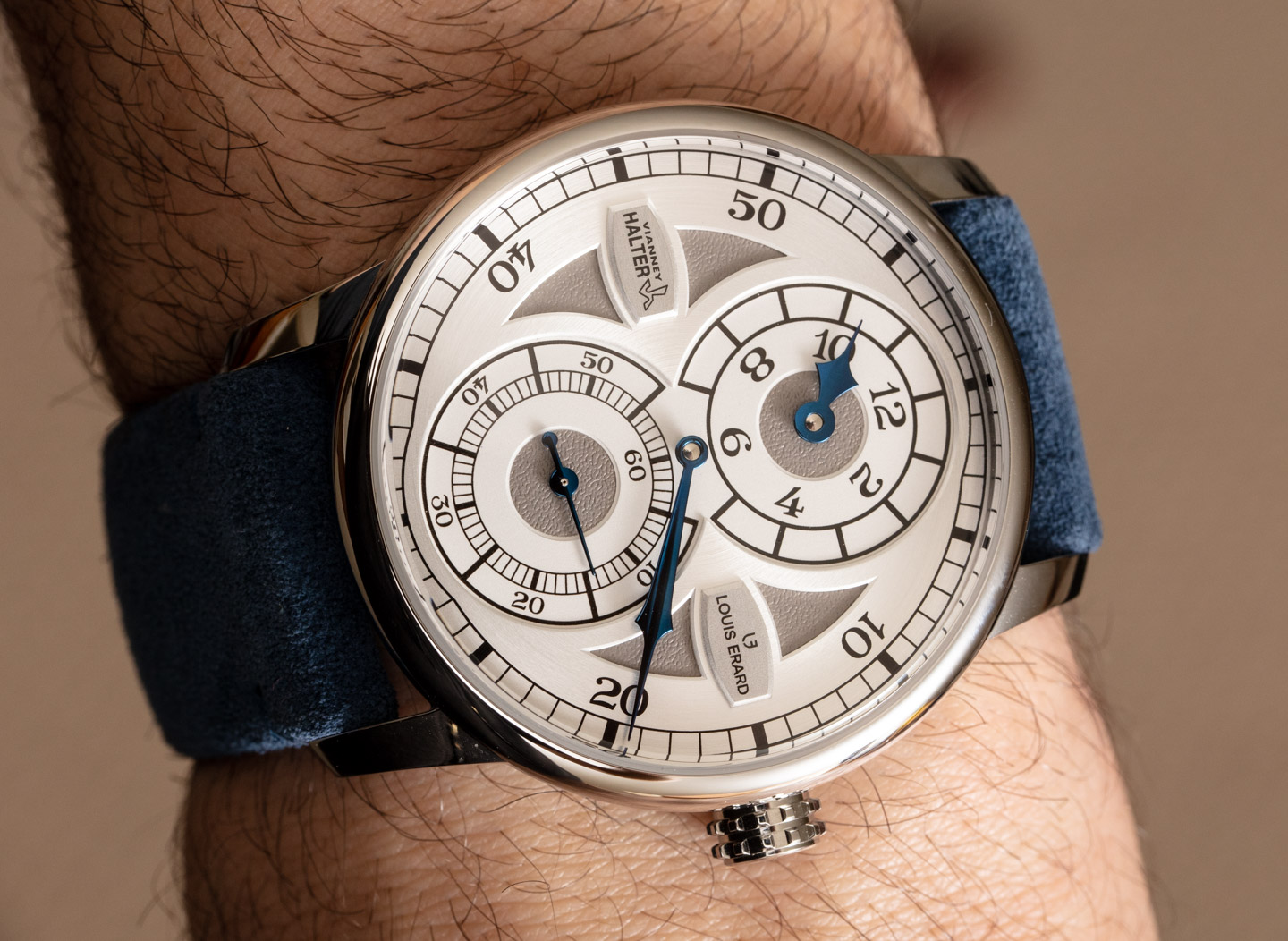 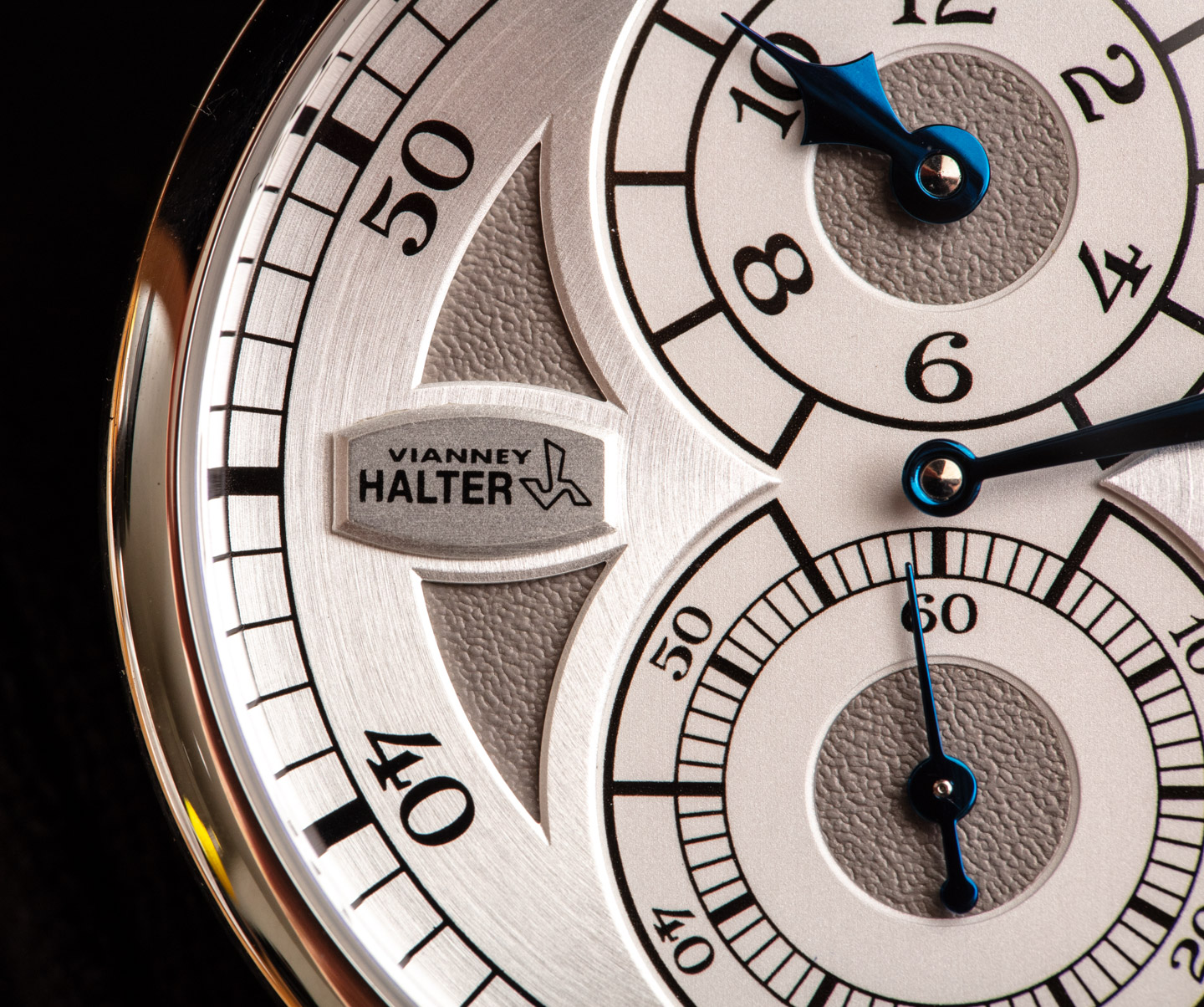 Vianney Halter is probably better known for his visionary approach to watchmaking and eye for design rather than his engineering precision. Halter is truly at his best when working with others who give him the opportunity to think big or merely execute a highly specific vision. With Louis Erard, that is the entire point of this collaborative design exercise. It begins with the limitation that the guest designer produces something in the Louis Erard Regulator watch family. From there, designers appear to have freedom with elements such as movements, hands, dials, cases, and straps.

For example, a previous collaboration watch with Louis Erard and Alain Silberstein was also a regulator, but it had a different movement (different complications and was manually wound), and a different case, in addition to of course a different dial and hand set (not to mention strap). This implies that Louis Erard is giving its esteemed guests a lot of leeway in how they want their regulator watches expressed — being mindful of the need to produce reasonably, not stratospherically-priced luxury watches. 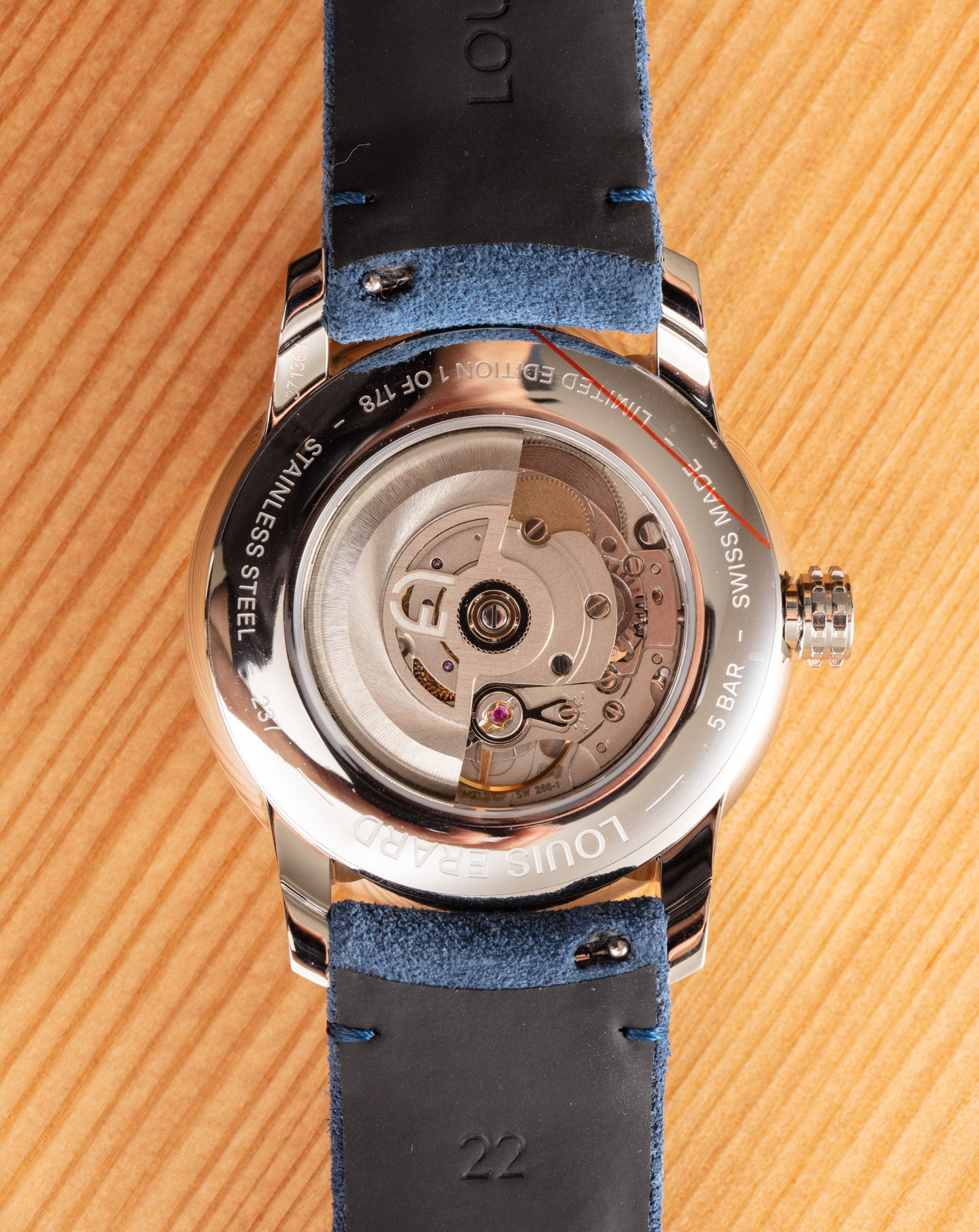 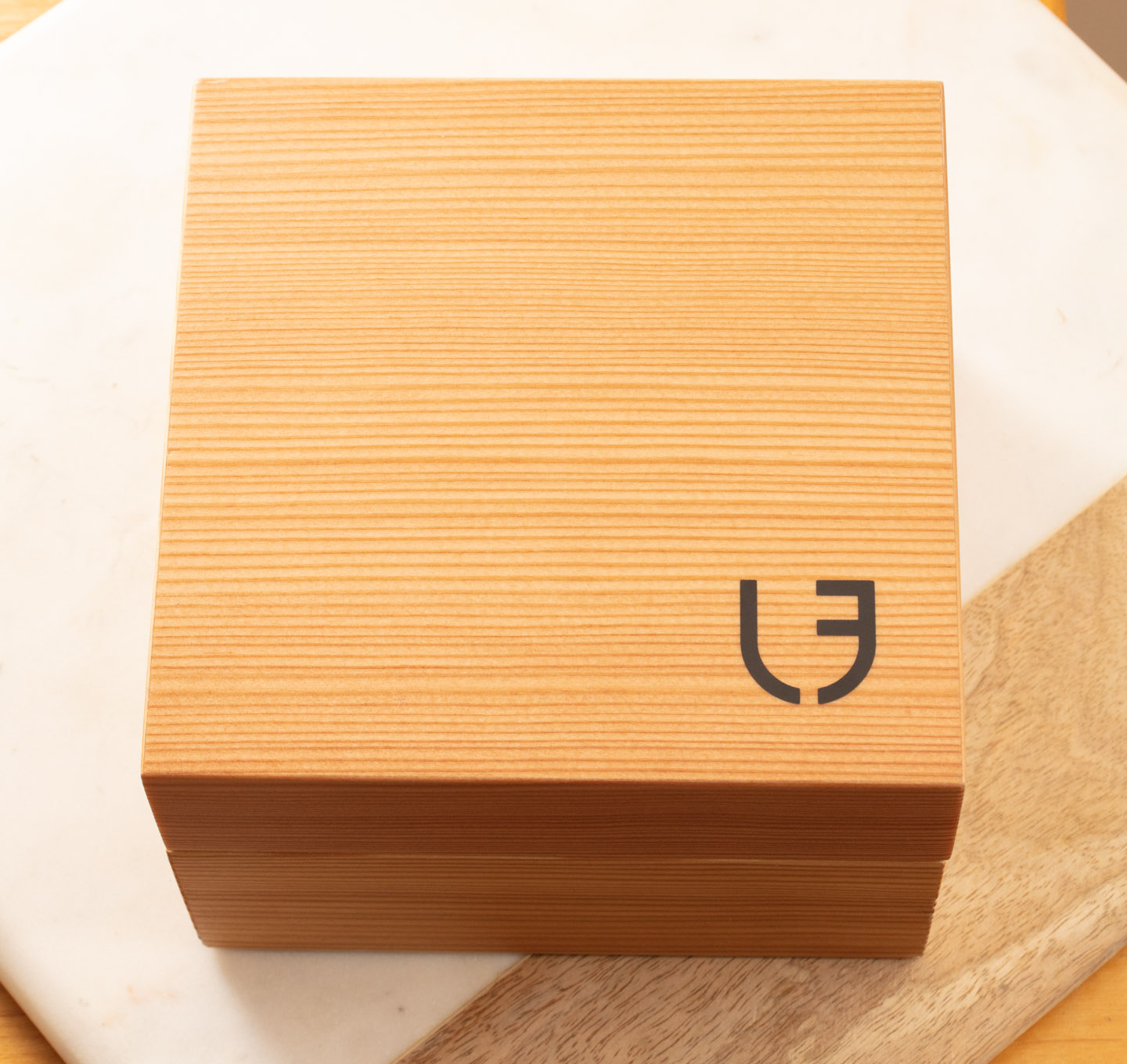 Vianney Halter himself is very open about the fact that the collaboration with Louis Erard has allowed a new section of the watch enthusiast market to appreciate his brand of artwork and design. Vianney Halter, as a member of the prestigious AHCI watchmakers group, is also the person who legitimized “steampunk” as an aesthetic that could work in the luxury watch space. This is as big a deal as having luxury watches inspired by video games — and now that is also becoming commonplace. Watches such as Vianney Halter’s famed Antiqua are some of the best examples. More recently Vianney Halter has explored his appreciation for more contemporary science fiction with watches such as the Star Trek-inspired deep Space Tourbillon, but the Louis Erard x Vianney Halter Automatic Regulator hearkens back to when Vianney Halter was designing timepieces for Jules Verne.

The watch uses a movement that isn’t really that common yet — the Swiss Made Sellita SW266-1 automatic. It operates at 4Hz with about 38 hours of power reserve and features a regulator-style display with the minutes, hours, and seconds on different dials. On the rear of the case, you can see the movement through the caseback window. Over the dial is an AR-coated domed sapphire crystal, and the polished steel case is water-resistant to 50 meters. 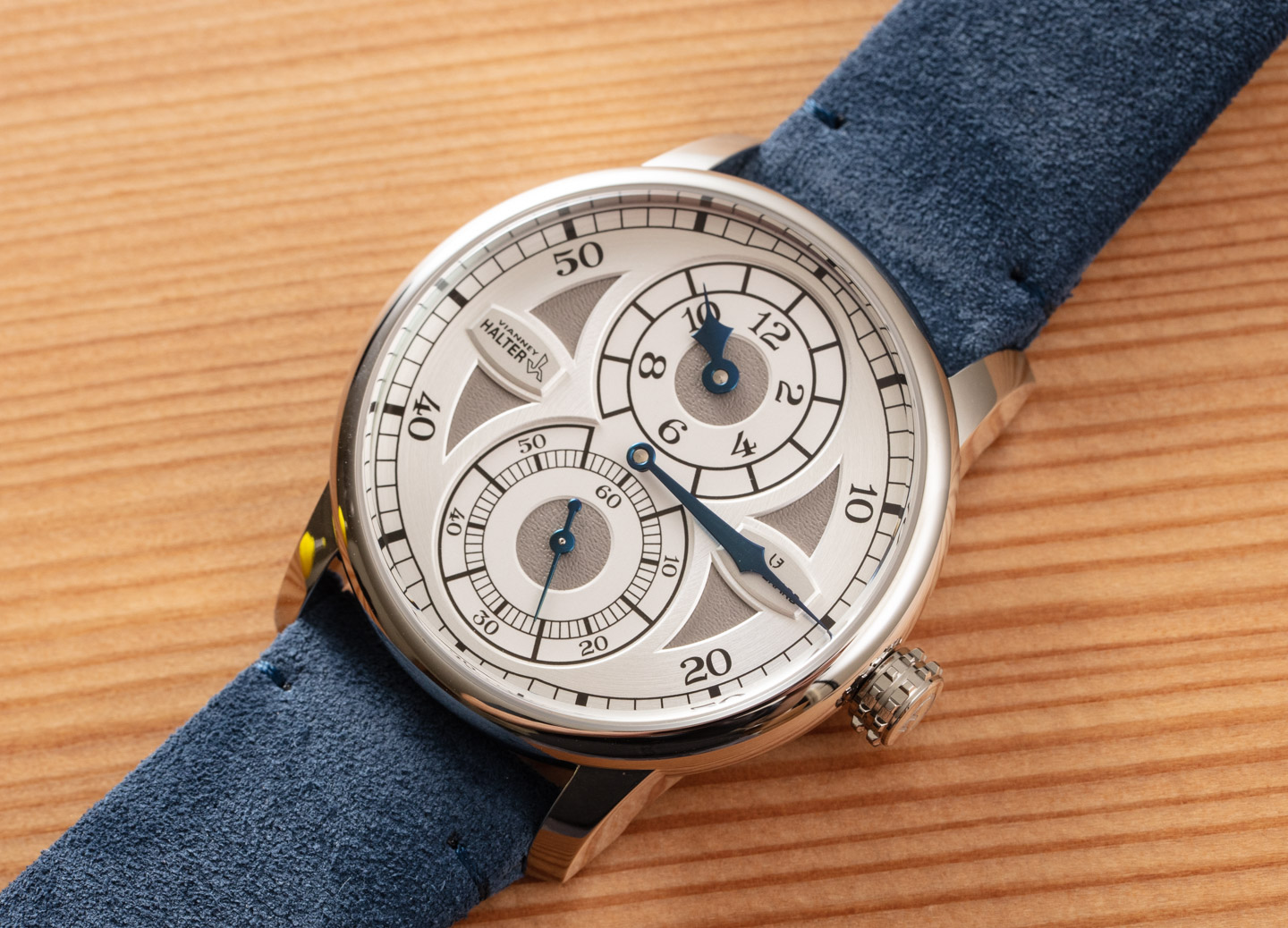 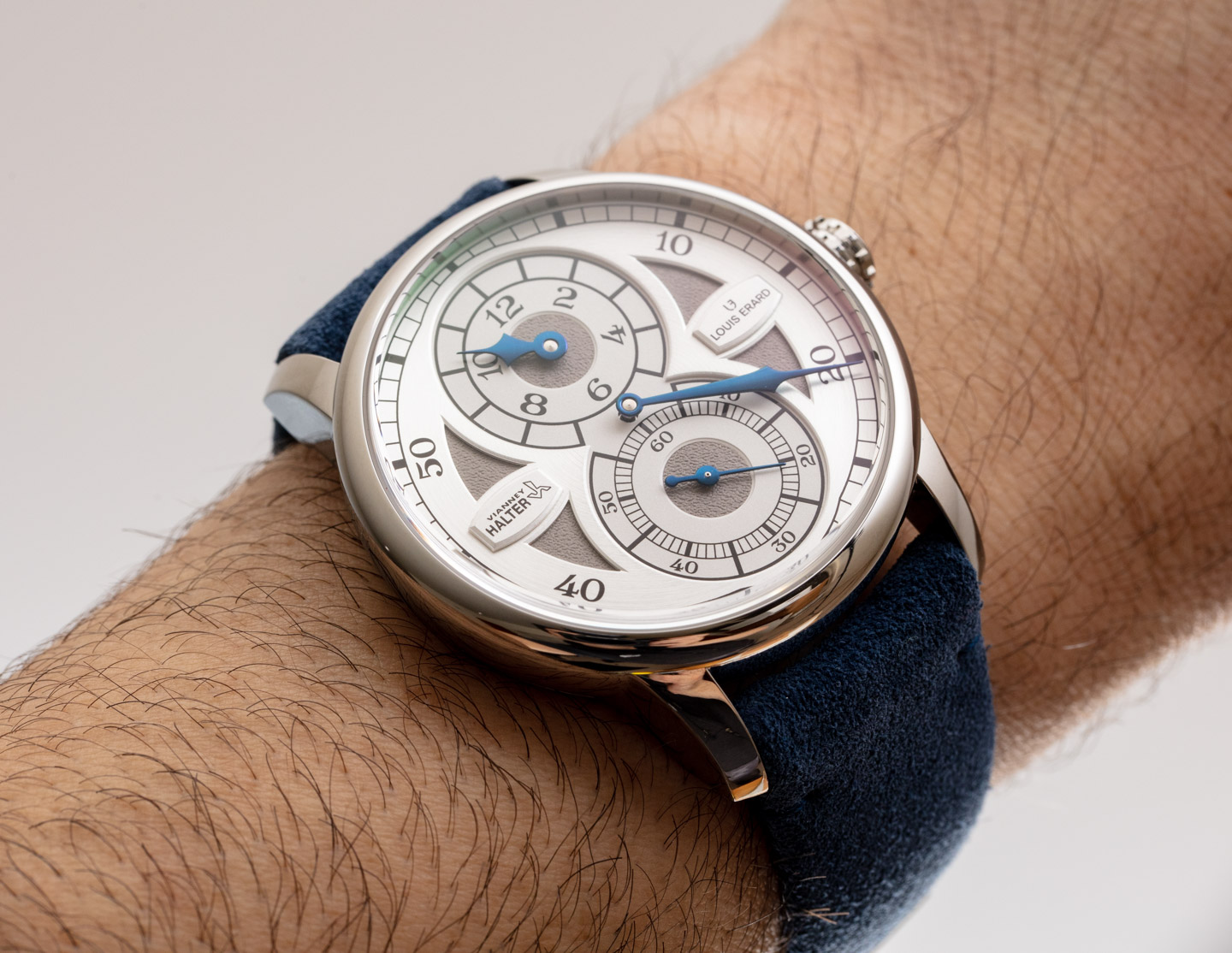 On the wrist, the case is 42mm-wide and 12.25mm-thick. I found it to be large-wearing with the prominent lugs, but on the strap, it wore very, very comfortably. Even the case crown is unique to Vianney Halter. The dial is where most people are going to spend their visual time, and it is a very faithful blend of the regulator concept Louis Erard wants to promote and the style of early, independent Vianney Halter.

The dial looks like something a Klingon gentleman might wear, imbued with a late 19th-century air of good, clean taste. The dials for the time information are very easy to read, as you might expect on a classic pocket watch. Vianney Halter returns his signature “fountain pen-style” hands, which are produced by him as well as flame-blued for color. The excellent proportions and interesting yet classy shapes on the dial make for a traditional-seeming watch face that nevertheless calls attention to itself. Classic Vianney Halter — and exactly what the stated mission of this watch was intended to be. 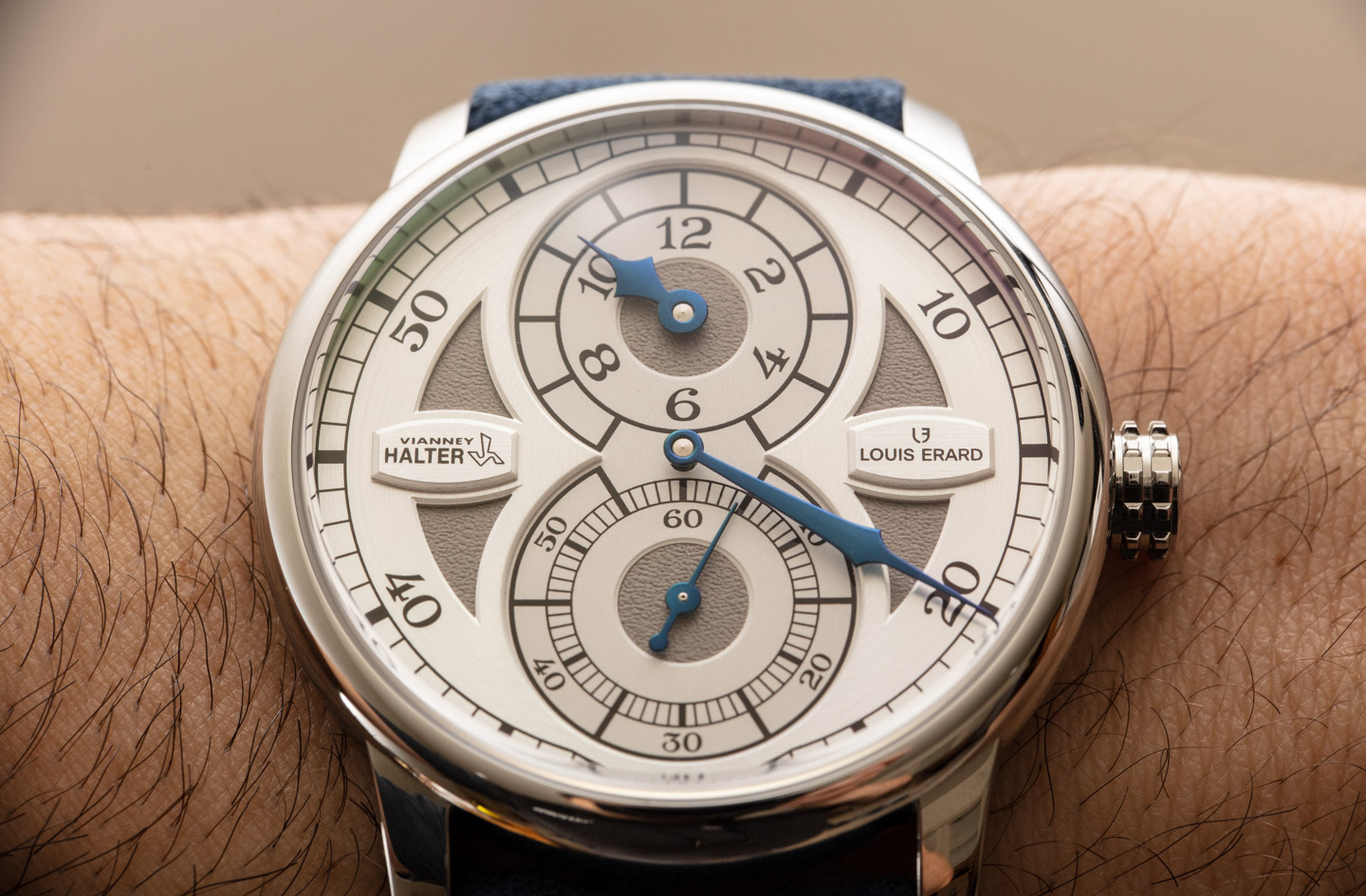 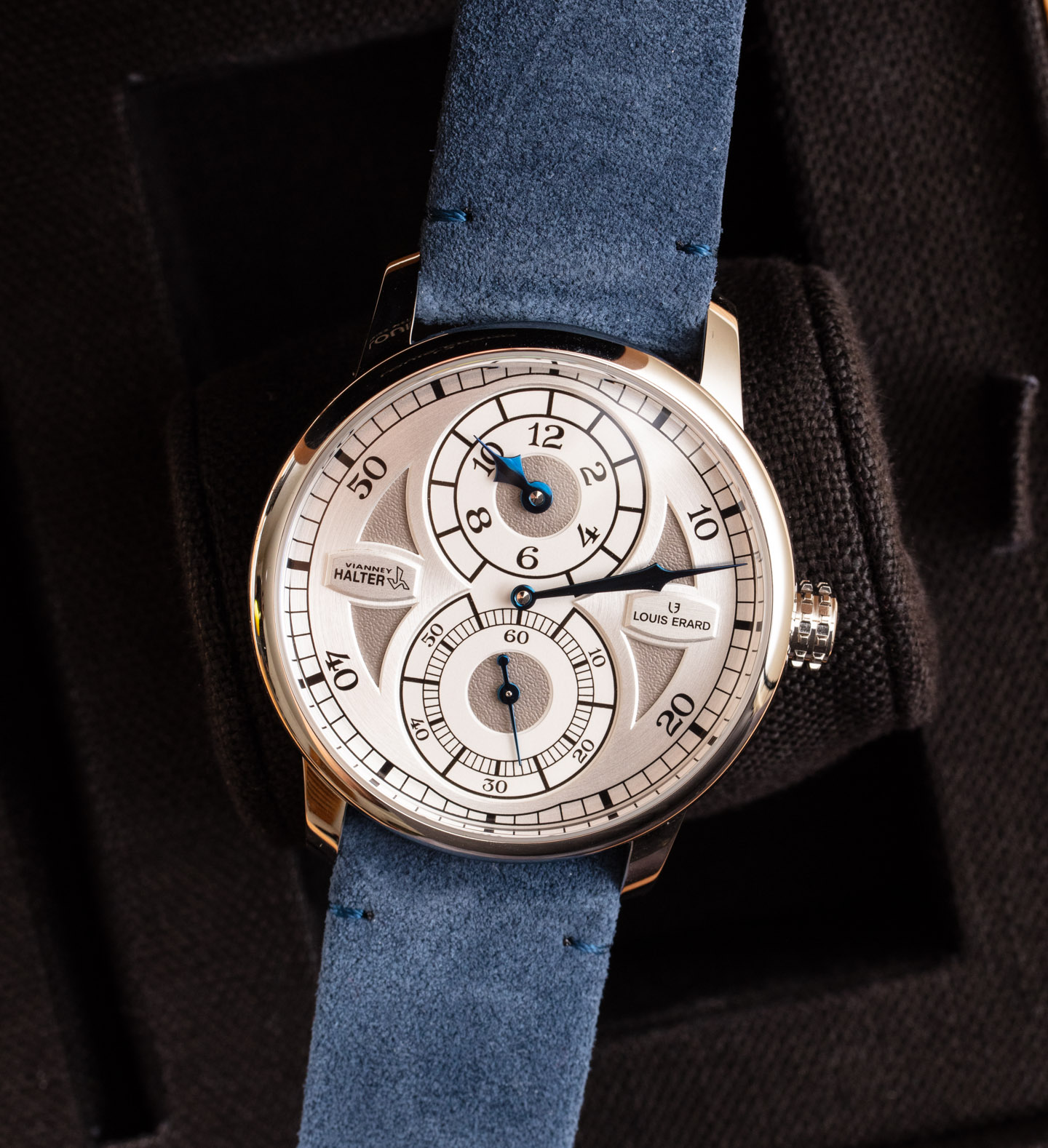 Vianney Halter selected an interesting choice for the accompanying strap that quickly makes a case for itself once you put it on. The strap is an “Oceania” blue Nubuck calfskin leather with matching xxx. The high-end suede feels lovely to the touch but more importantly wraps comfortably around your wrist in order to hold the watch case’s bulk in place. While the timepiece does not come with another strap, the supplier Nubuck leather strap has quick-release spring bars that allow you to strap in something else. I imagine a gray- or blue-colored lizard skin strap would look interesting as well.

Louis Erard and Vianney Halter have associated to produce the watch as a limited edition of 178 pieces, along with a custom wood presentation box. Louis Erard has scored twice with their novel collaboration concept which picks up where the trend for watch industry collaboration products left off about a decade ago. What is different today is the accessibility point with prices that products from such masters just a few years ago would have been unimaginable. Price for the reference 85237AA51 Le Regulateur Louis Erard x Vianney Halter watch is 3,500 CHF. Learn more at the Louis Erard website here.