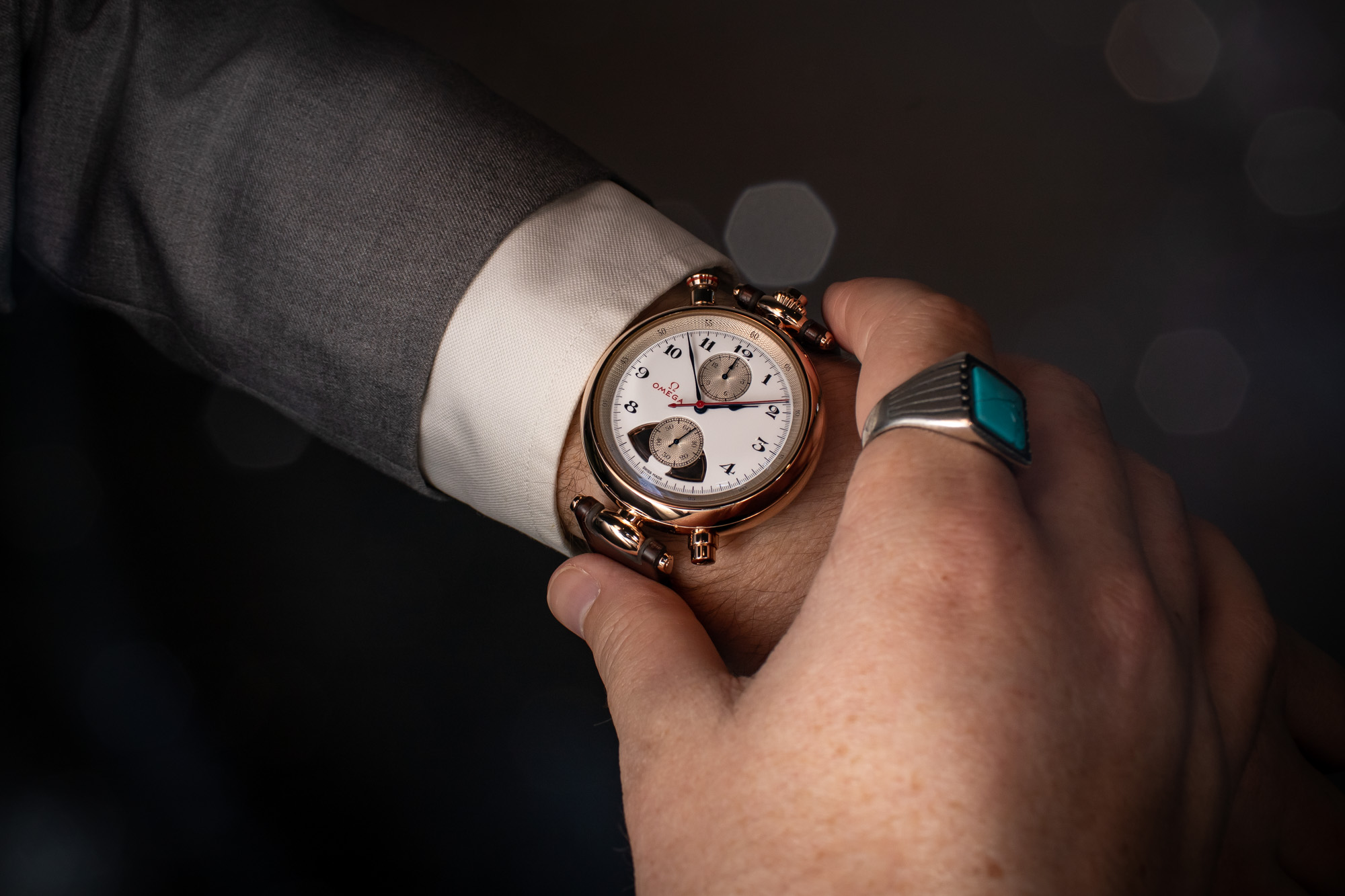 The minute repeater is widely considered to be one of the most complex and difficult-to-produce complications in all of mechanical watchmaking. The process of creating a chiming mechanism to musically represent the current time is complex, expensive, and labor-intensive, and is usually reserved for the highest-end releases in a luxury brand’s repertoire. A rattrapante, or split-seconds chronograph, is another high-complexity complication, elevating the common chronograph to the upper echelons of mechanical watchmaking. These two complications, on their own, represent massive efforts in design and craftsmanship. No brand has ever combined these two extremely complex mechanisms into a single unified complication – until now. For Omega’s latest release, the brand has announced not one, but two iterations of its new proprietary Chrono Chime, combining a fully functional split-seconds chronograph with a chiming mechanism designed to audibly read out the chronograph’s elapsed time to the nearest second. Representing over six years of work and over 575 movement components, the new Omega Speedmaster Chrono Chime and the Omega Olympic 1932 Chrono Chime stand as the new peak of Omega’s ultra-high-end output, offering both stunning mechanical innovations and a series of uniquely attractive visual flourishes. 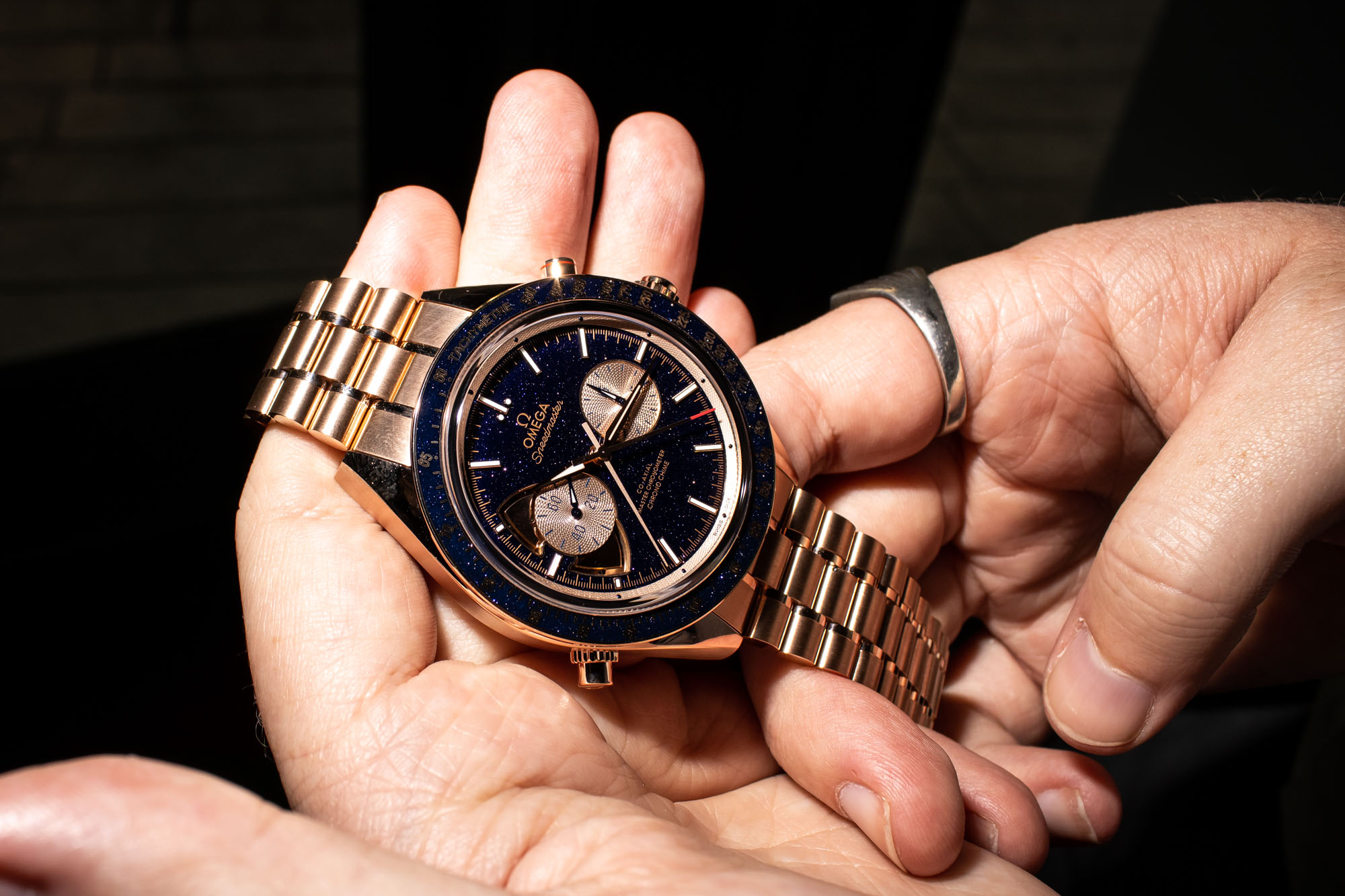 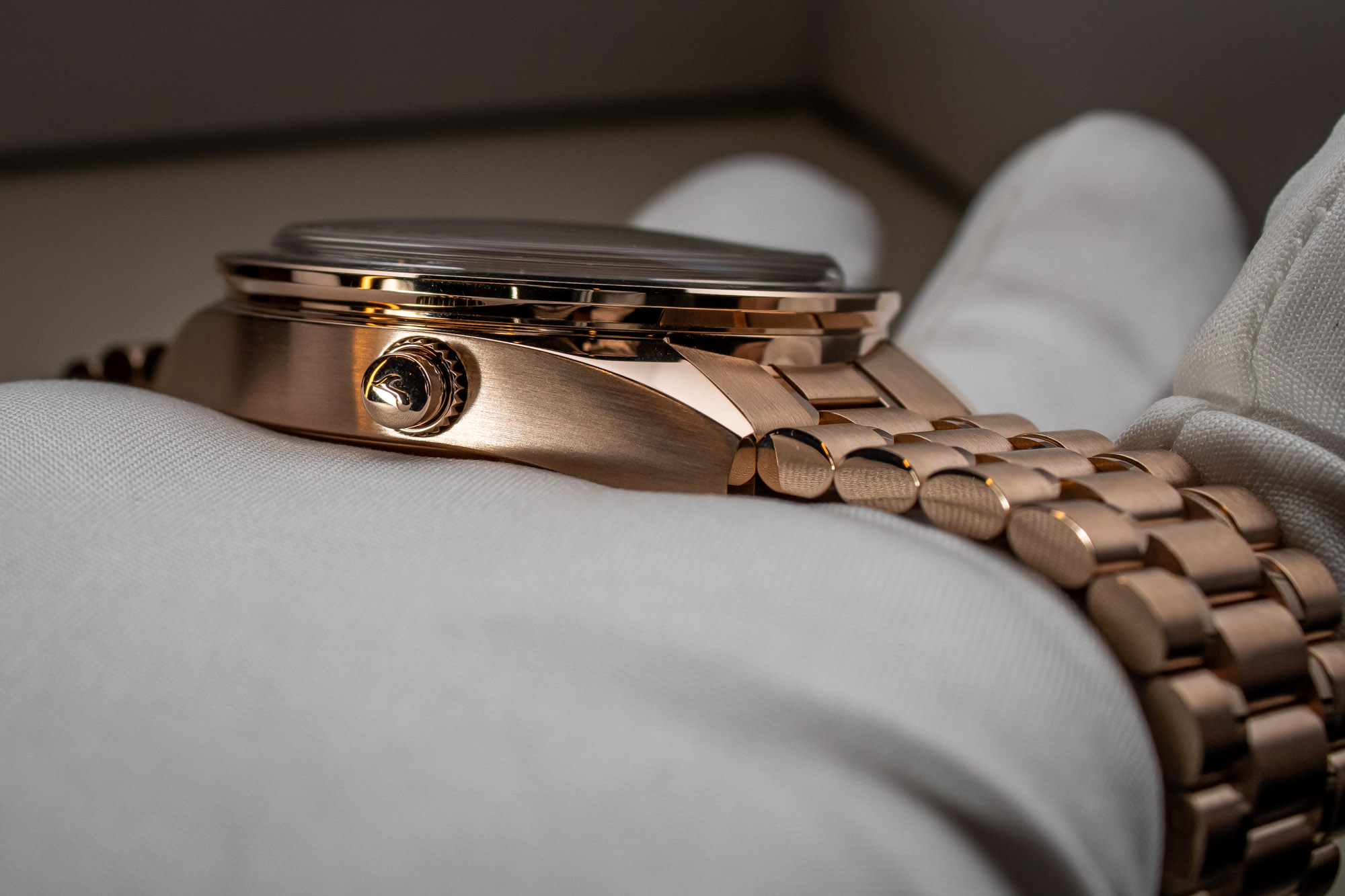 The Omega Speedmaster Chrono Chime will undoubtedly be the more visually familiar of the two models to enthusiasts. Inspired by the ‘60s era Speedmaster CK 2998 “Ed White,” the 45mm-wide 18k Sedna Gold case offers an upsized but impressively wearable take on the classic straight-lug Speedmaster form. Of course, the unusual pusher arrangement immediately sets this apart from the standard Speedmaster design on the wrist, with a crown-mounted chronograph monopusher at 3 o’clock, a 2 o’clock split-second pusher rimmed with a red ceramic accent ring, and a chime pusher at 8 o’clock, topped with a musical note motif. The “dot-over-90” style bezel shows a subtler change to the Speedmaster formula, with an insert made of innovative aventurine enamel. Created by grinding aventurine glass into a paste and applying it to the bezel surface with a Grand Feu enamel process, this striking material adds a touch of sparkling mystery to the watch on the wrist. Around back, Omega adds a sapphire display caseback to capture the complexity of its new in-house Calibre 1932 movement and mounts the watch on a Sedna gold variant of the famed Speedmaster “Nixon” bracelet. 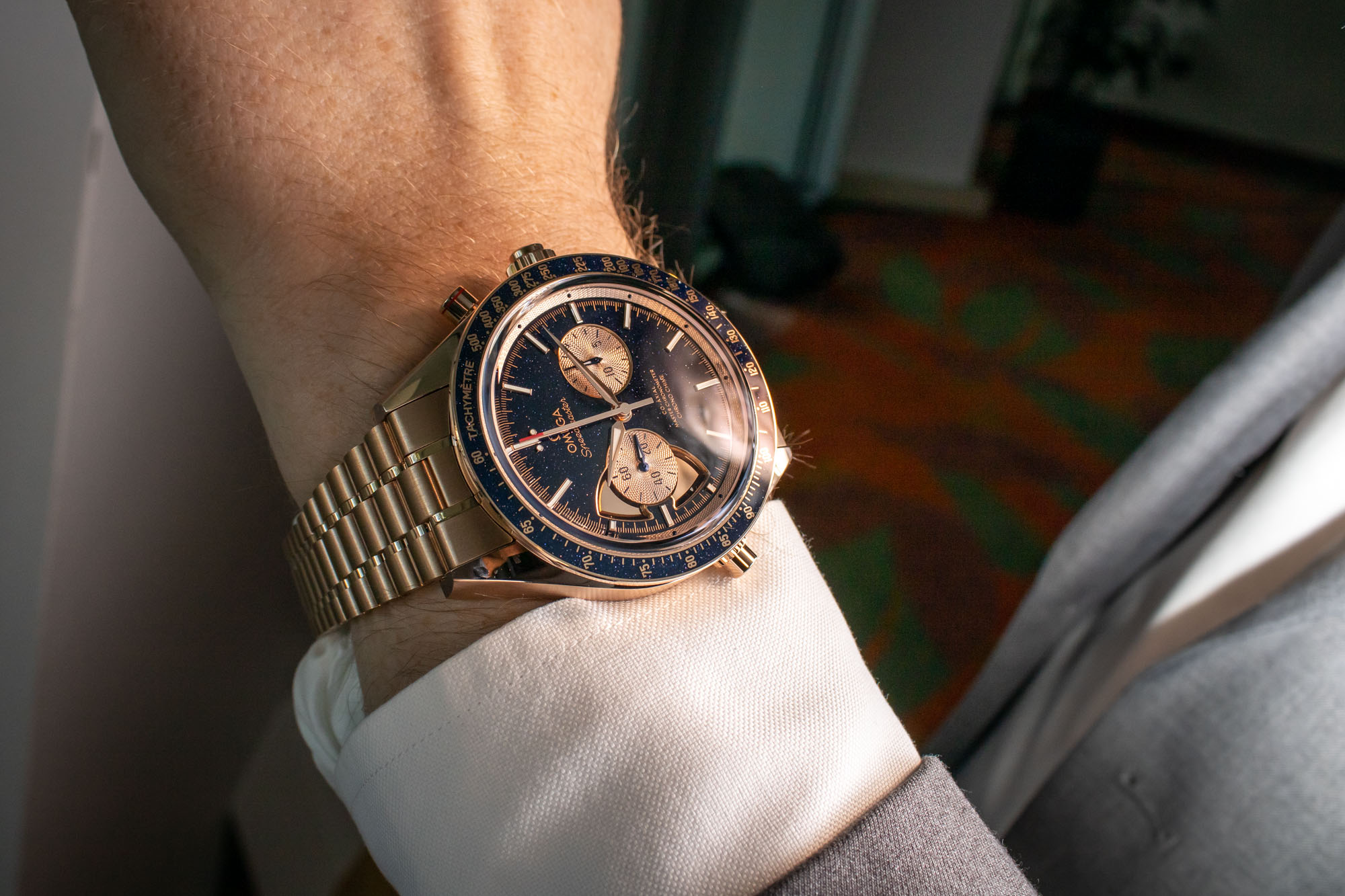 For the dial of the Speedmaster Chrono Chime, Omega extends the dark, moody aventurine enamel across the entire main dial surface. The CK 2998’s sharp alpha handset gives this a familiar vintage vibe, as do the applied rectangular indices, but the subdials and outer rehaut breathe new life into the Speedmaster layout. Omega finishes these Sedna gold elements with a proprietary new guilloché pattern intended to resemble spreading sound waves. In practice, this new pattern offers an impressive level of both reflectivity and texture, particularly when paired with the blued CVD subdial hands, but can come across as visually busy from certain angles. Of course, the real stars of the show here are the exposed chime hammers at 8 o’clock and 10 o’clock. Thoughtfully framing the 9 o’clock running seconds subdial, these hammers form a bright, immediate visual highlight on the wrist and keep the focus of the overall design front and center. Rosy gilt dial text completes the package here, maintaining the overall sense of rich, masculine warmth. 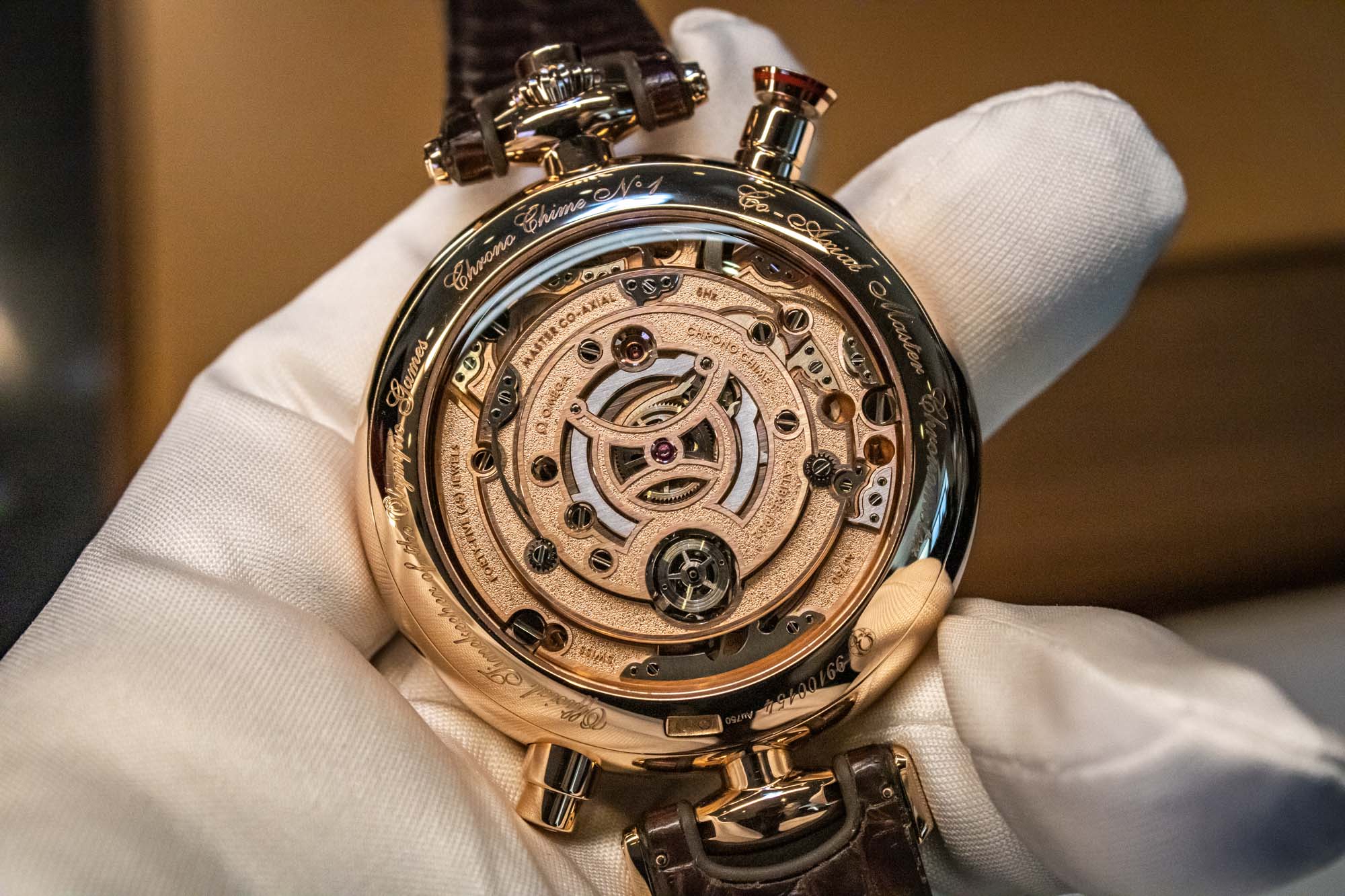 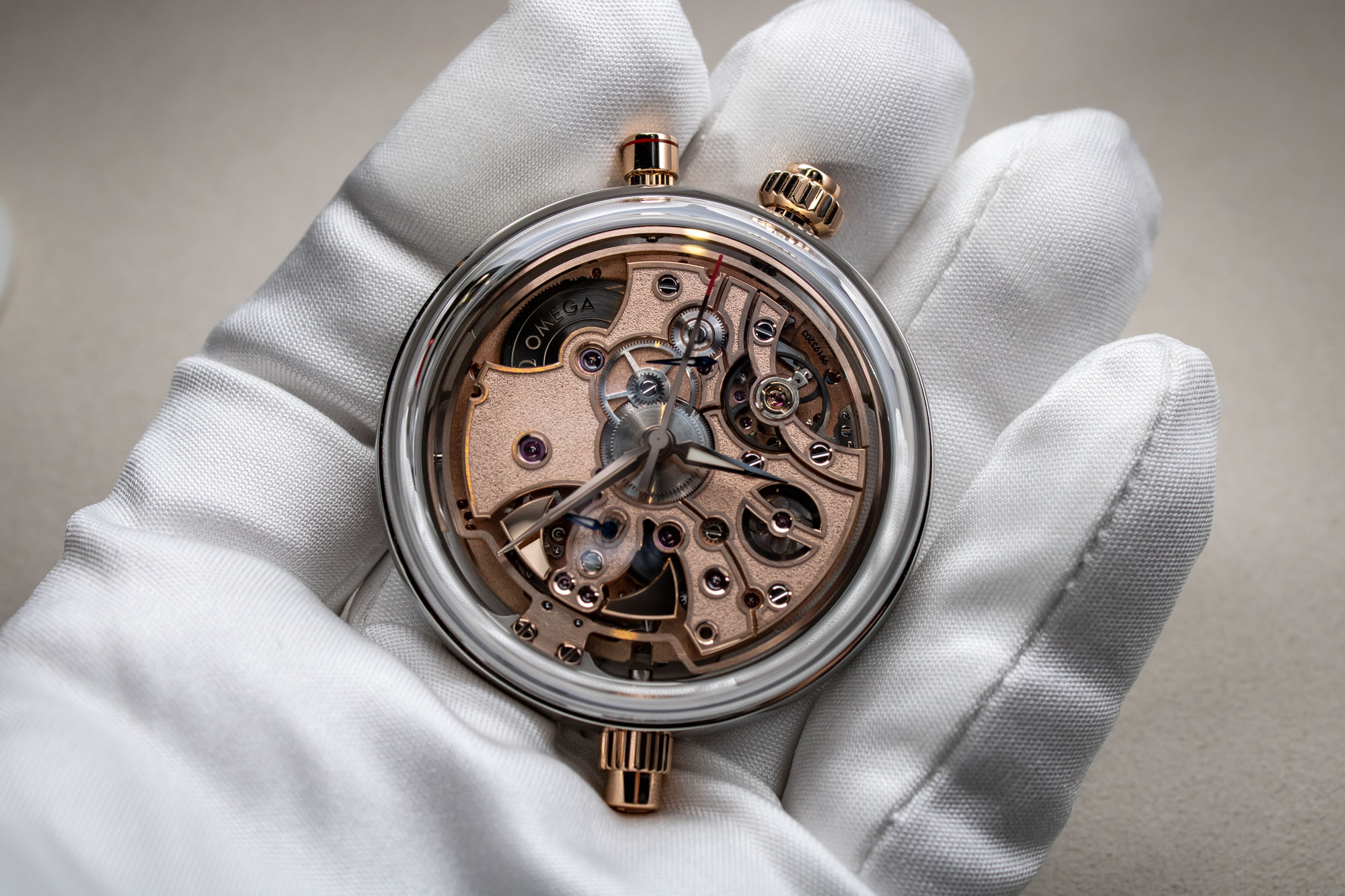 The true centerpiece of both the Omega Speedmaster Chrono Chime and the Omega Olympic 1932 Chrono Chime is the all-new Calibre 1932 hand-wound movement. Developed in partnership with Swatch Group sister brand Blancpain, the Calibre 1932 is the first-ever movement to pair a chiming mechanism with a chronograph. This is no mean mechanical feat, but Omega takes the design several steps further, mounting the chime gongs to the case rather than the movement for optimum acoustics. In addition, the Calibre 1932 offers the first Omega co-axial escapement to achieve a 36,000 bph beat rate, along with a solid 60-hour power reserve. Omega also has the Calibre 1932 certified to the stringent Master Chronometer standard by METAS. Aesthetically, Omega works to match the design of the Calibre 1932 to its groundbreaking performance, with an intricate series of circular Sedna gold bridges and plates finished in a high-impact mix of matte frosting with raised, mirror-polished edges. 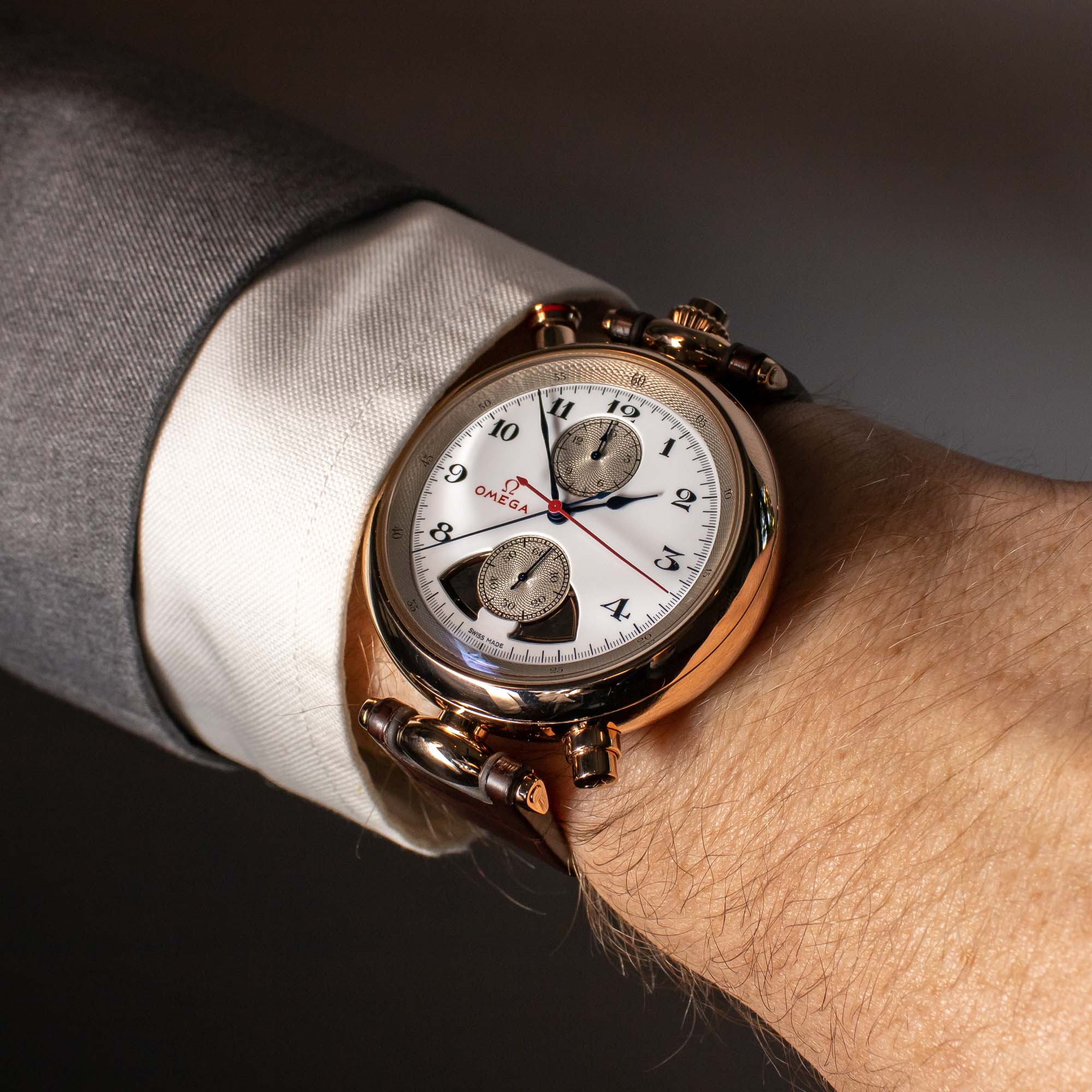 By contrast, the Omega Olympic 1932 Chrono Chime takes the same dramatic mechanical heart and presents it as a visual tribute to a pair of Omega firsts, referencing both the world’s first wrist-mounted minute repeater from 1892 and Omega’s first official Olympic chronograph from the 1932 Los Angeles Olympic Games. The rounded, polished 18k Sedna gold case follows the pocket watch-style contours of its 1892 forebear, offering a unique, somewhat floaty wearing experience on the wrist. Compared to its Speedmaster cousin, the Olympic 1932 Chrono Chime is a bolder, more baroque design, with three unique pusher styles rearranged to accommodate a 12 o’clock crown pushing through the T-shaped lug. This also requires a unique fitment for the honey-brown alligator leather strap. 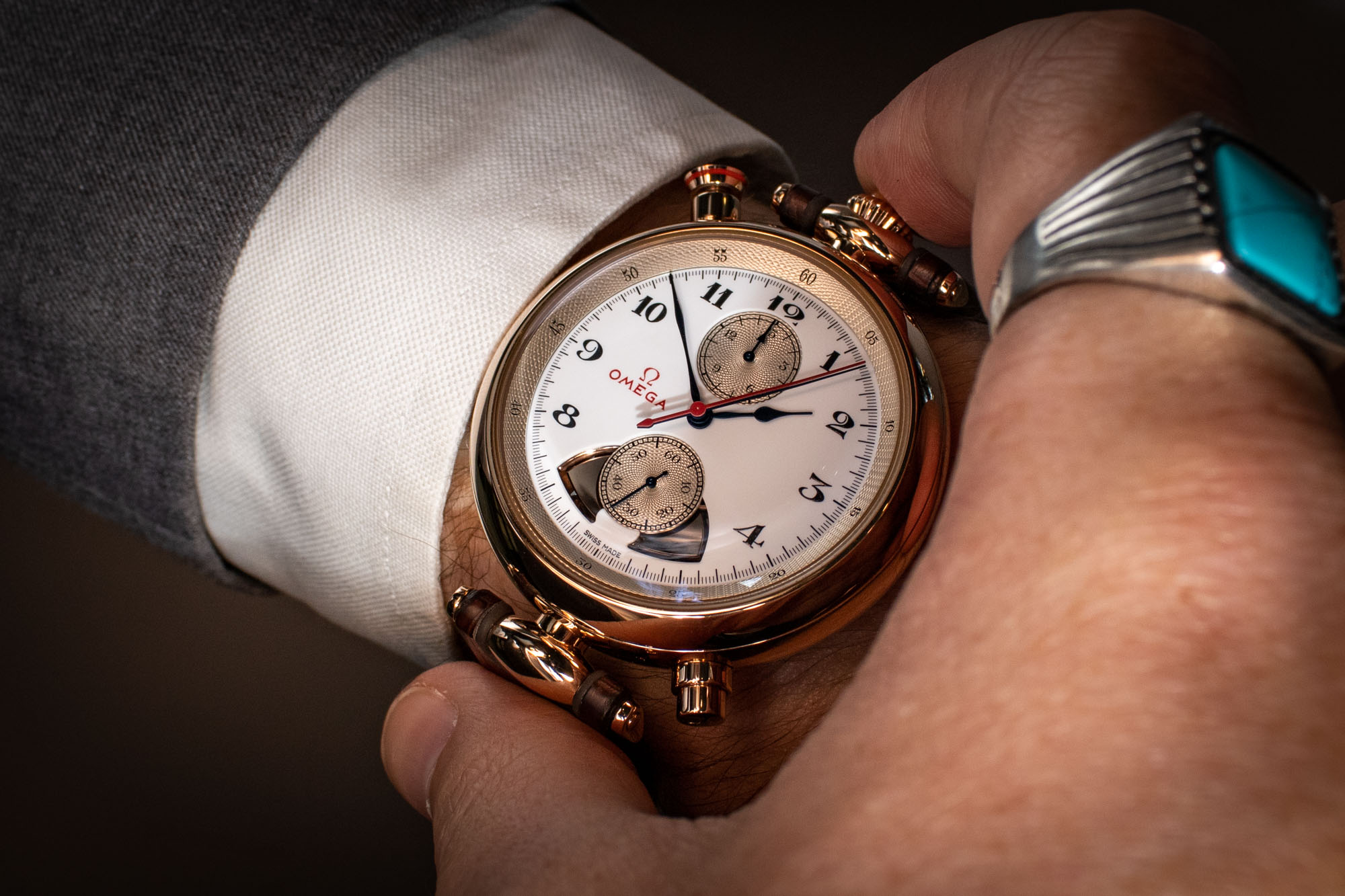 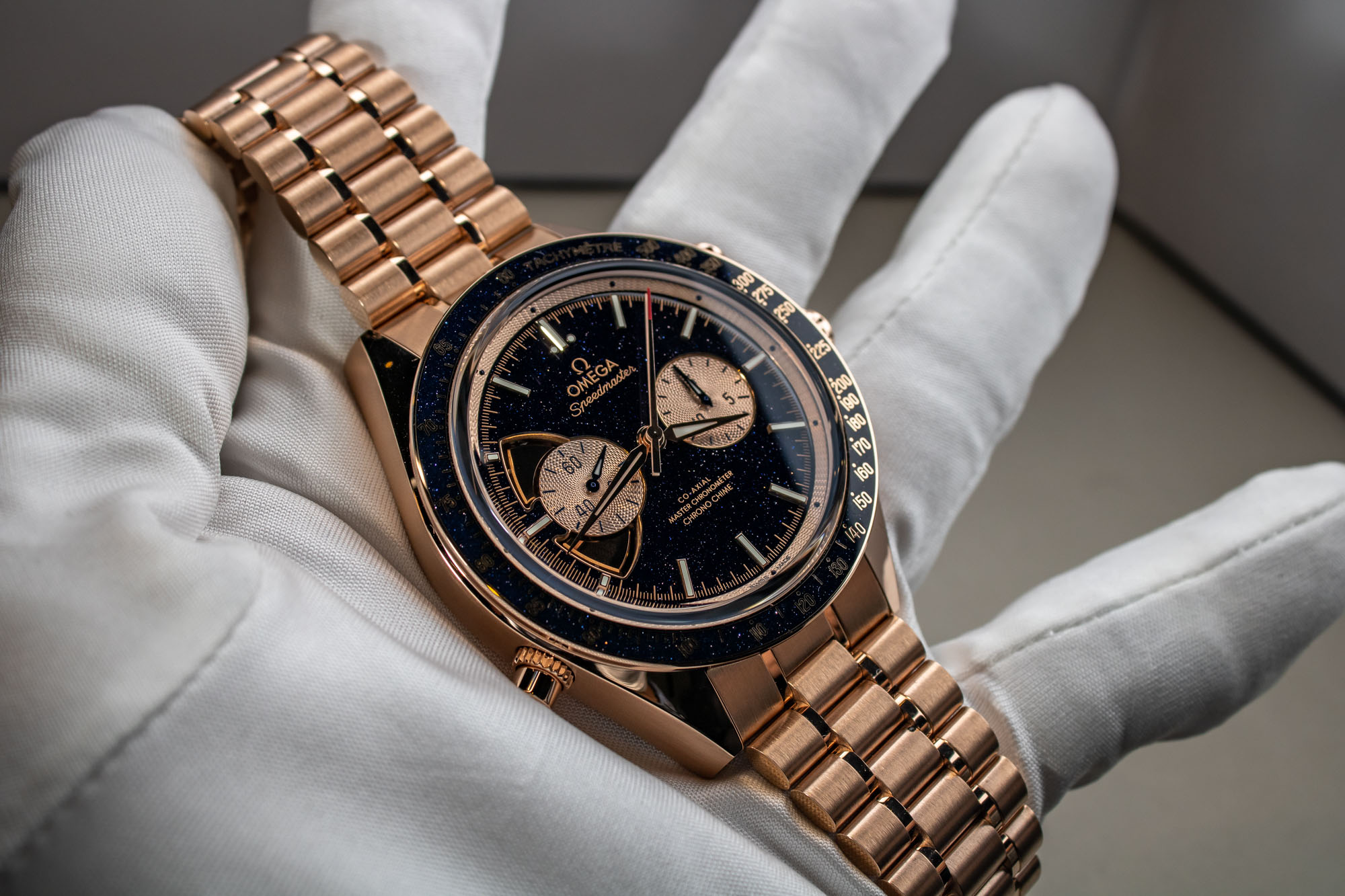 With a genuinely new complication that combines two of the most difficult and sought-after functions in haute horlogerie, the Omega Speedmaster Chrono Chime and the Omega Olympic 1932 Chrono Chime offer stunning and brilliantly finished new pinnacles for the brand’s horological efforts. Both models are available now but are numbered editions with roughly five movements expected to be made each year. MSRP for the Omega Speedmaster Chrono Chime is estimated at $450,000 USD as of press time, while pricing for the Omega Olympic 1932 Chrono Chime stands at an estimated $420,000 USD. For more information, please visit Omega’s website.