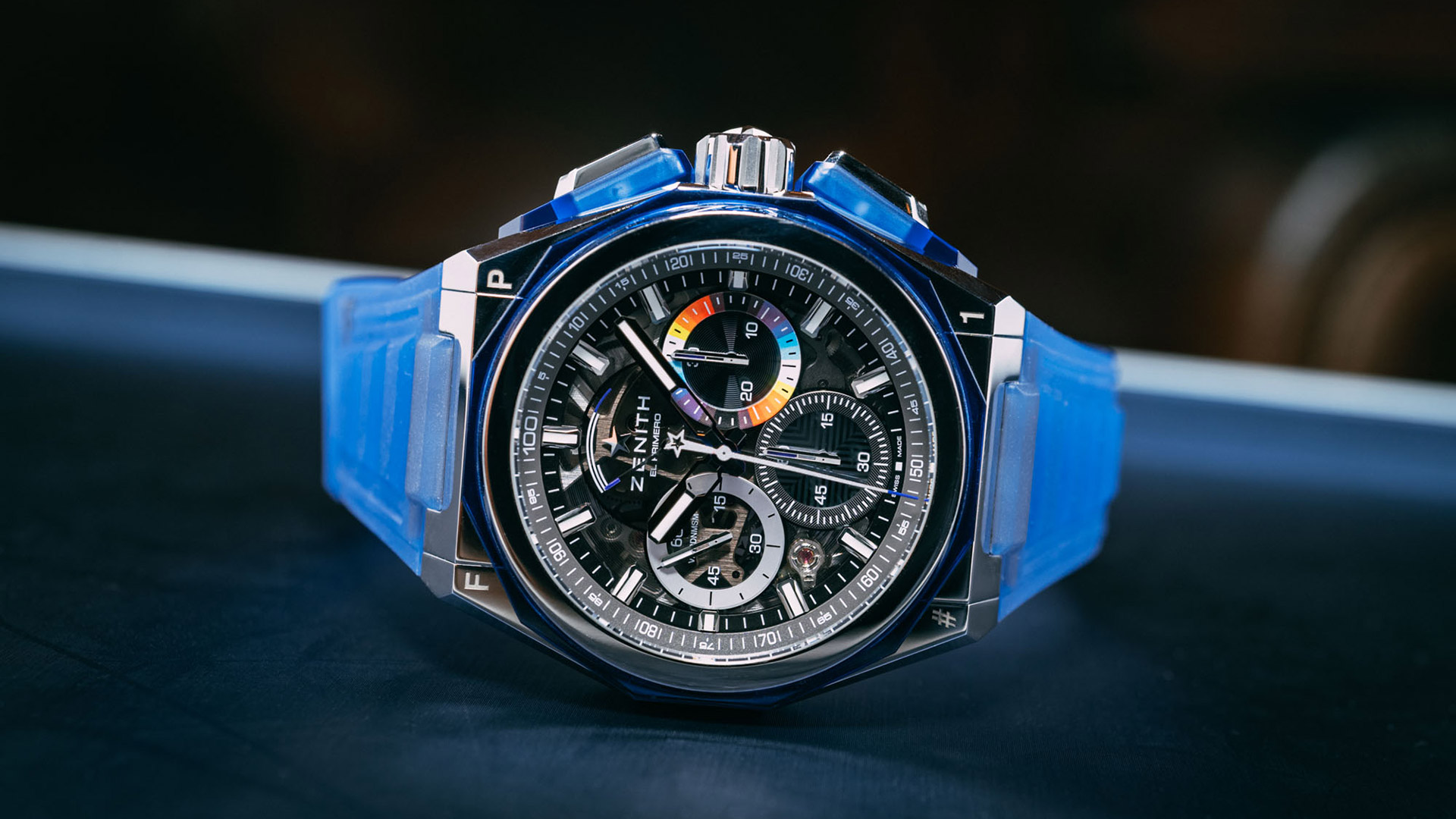 Much ink is perennially spilled by watch media discussing the “it color” of the year. Whether it’s salmon (so 2019), Tiffany Blue (ahem, turquoise), or some shade of green (arguably the leading contender for 2022), most colors eventually find their time in the sun. But why settle for one color when you can have them all? Rainbow-hued watches have become increasingly common in the past half-decade, and one would not be very hard pressed to find a multi-colored release from a wide variety of brands in any given year. It’s true that these watches tend to be inherently polarizing; after all, when unleashing an entire color palette onto the design of a single timepiece, the line between bold and gaudy becomes incredibly thin, and some brands walk it better than others. Utilizing every color on the spectrum just for the sake of it does not exactly scream restraint, yet it is the very thing that makes these watches unique, whether or not it’s your horological cup of tea. Full disclosure: It’s not mine – but as a watch enthusiast, I enjoy seeing these full-spectrum expressions of color, especially when achieved by a more technical approach to manufacturing processes and materials. One such example is the recently released Zenith Defy Extreme Felipe Pantone, an iridescent collaboration between Zenith and Argentine-Spanish optical artist Felipe Pantone. 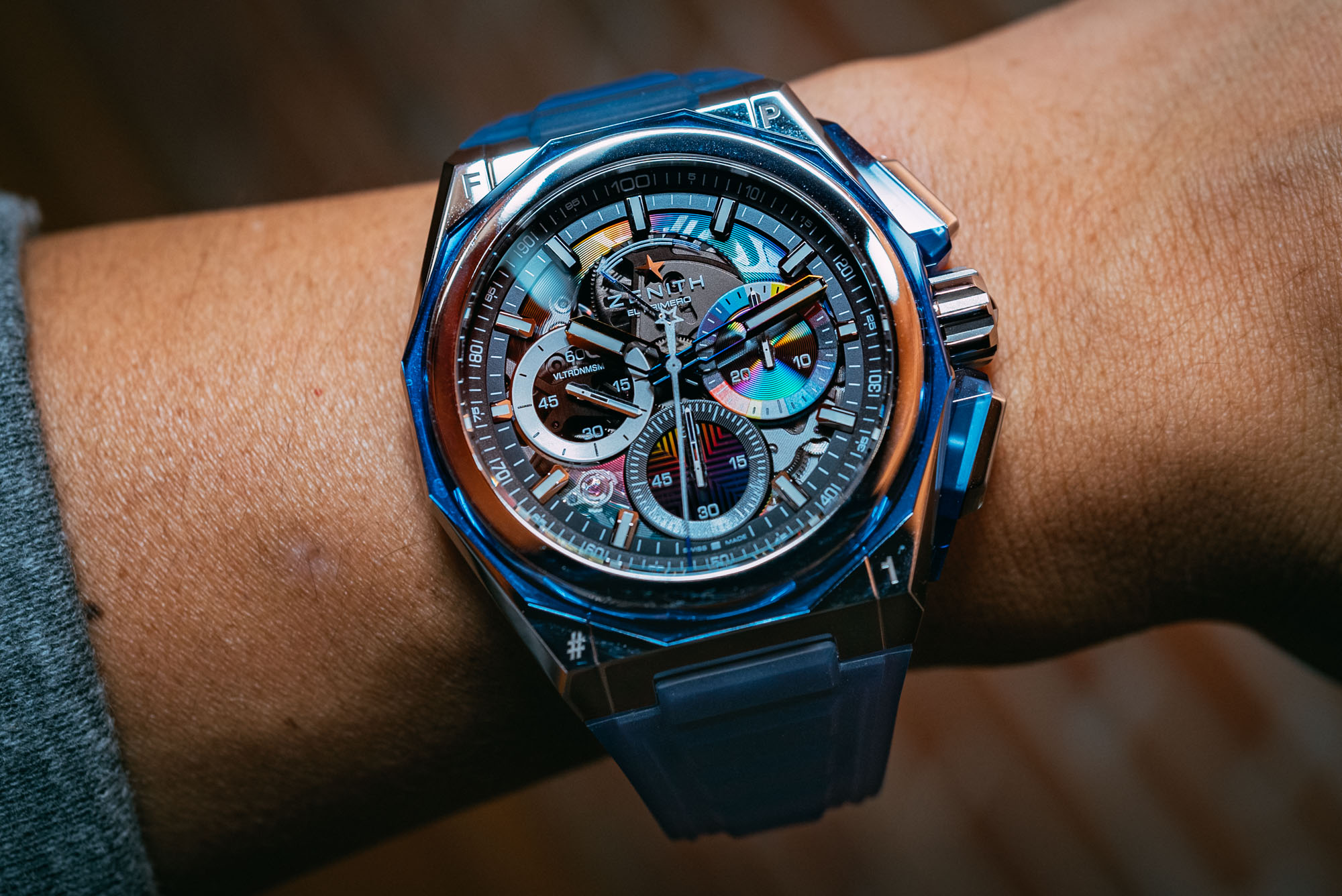 What is optical art? Broadly speaking, it is an art form that focuses on the interplay between light and a variety of materials to give an impression of movement, allowing the viewer to see a new piece of art from every angle. That principle is at the fore with the Defy Extreme Felipe Pantone, the third timepiece that Pantone (no relation to the identically-named company famous for their color swatches) has designed in collaboration with the Le Locle-based manufacture. The first two references were released just last year: the Defy 21 Felipe Pantone in black ceramic, and the pièce unique Defy Tourbillon Felipe Pantone created for the 2021 edition of the Only Watch charity auction. The Defy Extreme Felipe Pantone continues with their unique application of rainbow-gradient PVD throughout elements of the watch, but in comparison to the first two collaboration pieces, the colors here have a slightly more translucent feel, especially when viewed from the front. A large reason for this is the clear sapphire disc at the base of the dial, which Zenith states is both physically and chemically etched with micro-engravings measuring just 100 nanometers deep. The result is a set of subtly chromatic concentric bands just inside the chapter ring that shift in color depending on the angle of the light. This iridescent patterning is continued on the 30-minute counter and 60-second subdial located at 3 o’clock and 6 o’clock, respectively, and is an extension of Pantone’s “Planned Iridescence” artwork collection that utilizes similar geometric textures and motifs. The visual effect is reminiscent of holographic stamped foil, only executed in a far more intricate manner. The stainless steel case measures in at 45mm-wide and 15.4mm-thick; this is no dainty watch, but it sits relatively well on the wrist given its sharply angled lugs. Water resistance clocks in at a very sturdy 20 ATM if you feel so inclined to bring a splash of color on your next poolside dip. 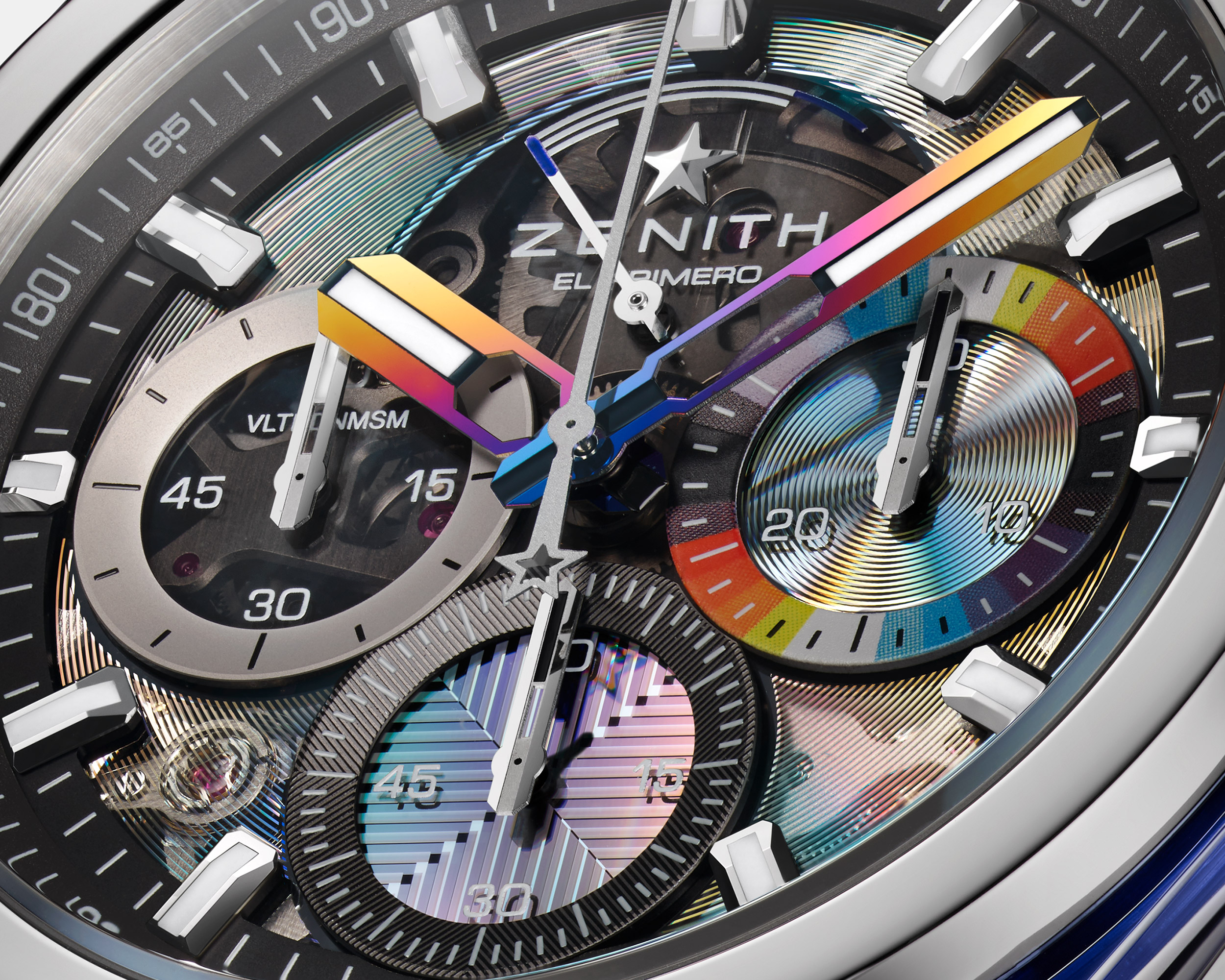 A three-dimensional rainbow PVD process is used to treat both the rhodium-plated handset and the open-worked star-shaped rotor of the movement inside, and the slightly increased opacity of the finish offers a bit of contrast, though legibility is still less than optimal (as is the case with most skeletonized dials). I’m ok with the tradeoff, though, as this watch is arguably more about fun than function, but make no mistake — this watch is exceptionally functional considering the engineering behind the El Primero 21 caliber that powers the Defy Extreme. A quick refresher: The El Primero 21 is Zenith’s automatic chronograph movement that features two independent escapements, one that operates at 36,000 bph (5Hz) for standard timekeeping and another that runs at an astonishing 360,000 bph (50 Hz) for the chronograph function. So whereas the running seconds hand of a “normal” chronograph completes one full revolution of the dial in 60 seconds, the El Primero 21 does so in one second, allowing for precise measurements down to 1/100th of a second. It’s a dizzying and impressive movement to behold when seen on a standard Defy Extreme, made all the more colorfully mesmerizing when given the Felipe Pantone treatment. The final touch of color on the watch comes by way of the translucent blue dodecagonal bezel (that’s 12 sides for the geometrically challenged), chronograph pusher protectors constructed of yttrium aluminosilicate (a crystalline glass material that is similar to synthetic sapphire), and a matching blue silicone strap. All told, the colors of the Defy Extreme Felipe Pantone render themselves as more of a shimmer than a shout, but still striking nonetheless. 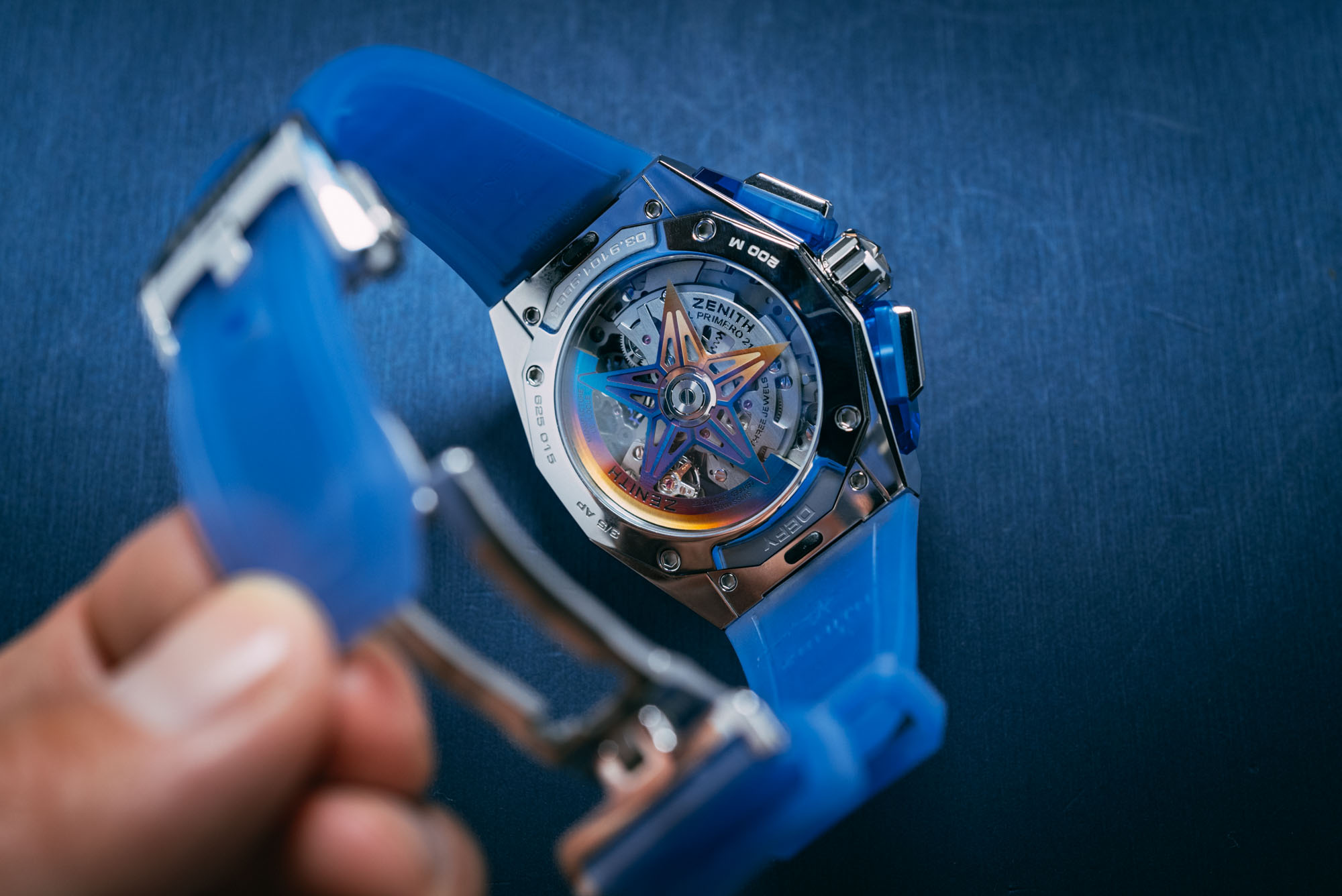 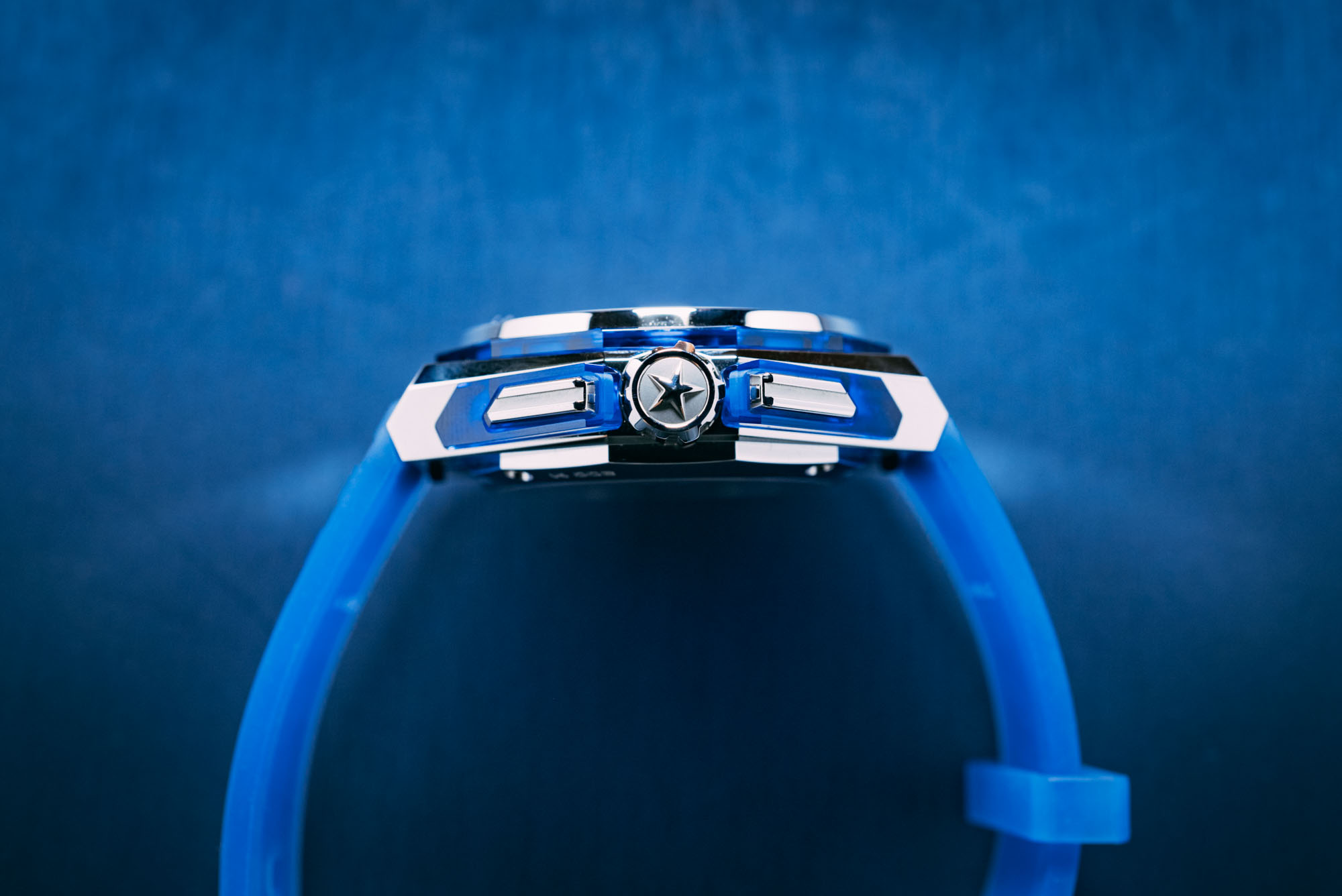 Given that optical art is, by nature, a more technical discipline, it makes complete sense for Felipe Pantone to use the Zenith Defy Extreme as the blank canvas for his latest watch collaboration. The El Primero 21 movement is nothing if not an impressive feat of horological engineering, and proof of Zenith’s willingness to push the boundaries of modern watchmaking. The case shape is contemporary, highly angular, and the fact that the rainbow PVD treatment produces slightly different results every time means that each watch is also its own unique piece of art. And while not all artists choose to sign their work, Felipe Pantone does so here by engraving his initials and “#1” (for El Primero) into the four highly polished stainless steel lugs.

The best artistic watch collaborations are the ones that feel authentic to both brand and artist: is each fluent in the other’s ethos? The answer is not always a definitive yes, as many a shoehorned partnership can attest. But with the Defy Extreme Felipe Pantone, there is a natural flow between Pantone’s chromatic design language and Zenith’s technical execution that result in a timepiece that’s as much art as it is accessory.

The Zenith Defy Extreme Felipe Pantone watch is limited to 100 pieces and is available in Zenith boutiques and online at the brand’s website. Pricing is 29,900 CHF. For more information, please visit www.zenith-watches.com.