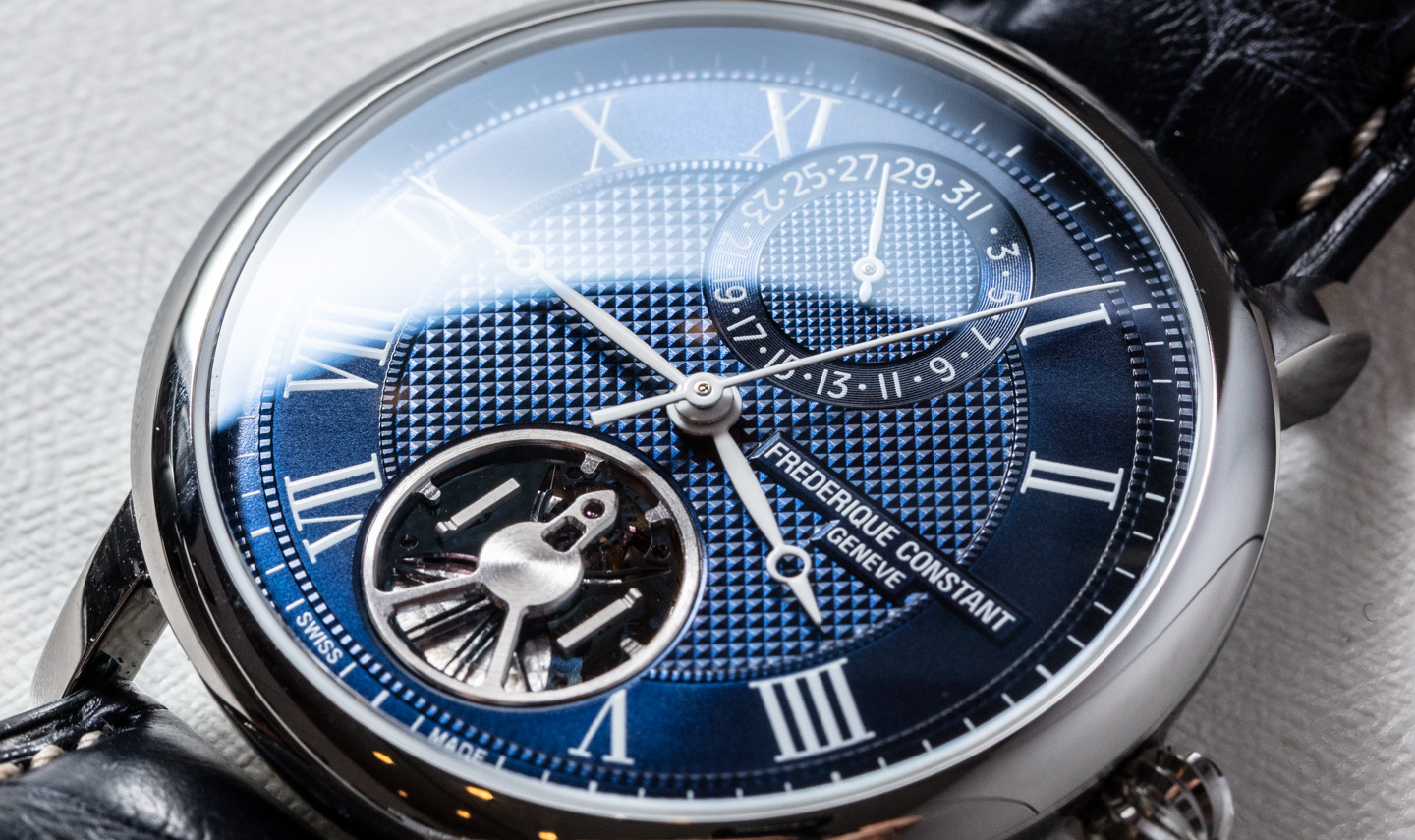 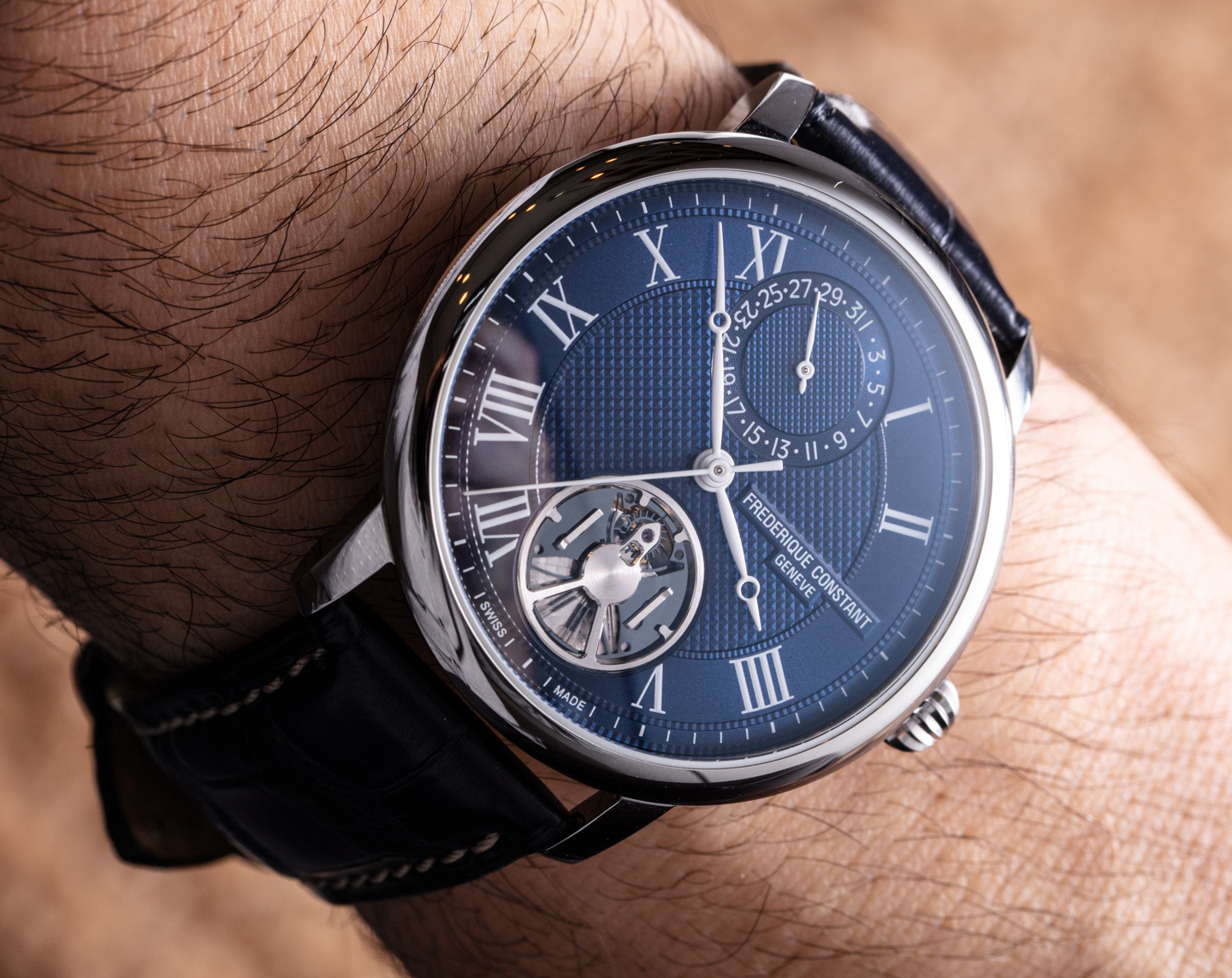 I was somewhat surprised at the lack of watch enthusiast fanfare when Swiss Frederique Constant originally debuted the Slimline Monolithic Manufacture watch on aBlogtoWatch here back in March 2021. If this watch was released by a brand with more of a marketing push behind it or one of the “old names” in watchmaking, then I think the community would have appreciated the contribution this mechanism adds to the landscape of today’s “next generation” mechanical watch movements. While consumers get excited about 5Hz “high beat” mechanical watches, thanks to their promise of increased accuracy over time, how do you think they might feel about 40Hz? That’s the operational frequency of the mechanical oscillator in the in-house automatic movement contained within these Slimline Monolithic Manufacture watches.

Perhaps the problem is one of naming and presentation. At a glance, this classy-looking timepiece doesn’t appear to be much different from Frederique Constant’s standard Slimline/Classic Manufacture dress watch collection. The product name itself is cryptic, at best, with the mere addition of the term “monolithic,” which is a word that references an engineering element of the watch, not its style or stance. Finally, Frederique Constant seems to assume that the consumer even knows how to appreciate a product like this, let alone how to compare it with other purchases. The reality is that even at around $5,000 USD, there are pretty much no other watches that do what the Slimline Monolithic Manufacture does — even if there are many other watches at this price point with silicon-based regulation systems. Thus, what I will attempt to do is explain what is “monolithic” about the Slimline Monolithic Manufacture and the type of innovation that Frederique Constant offers to the luxury watch market with a product collection such as this. 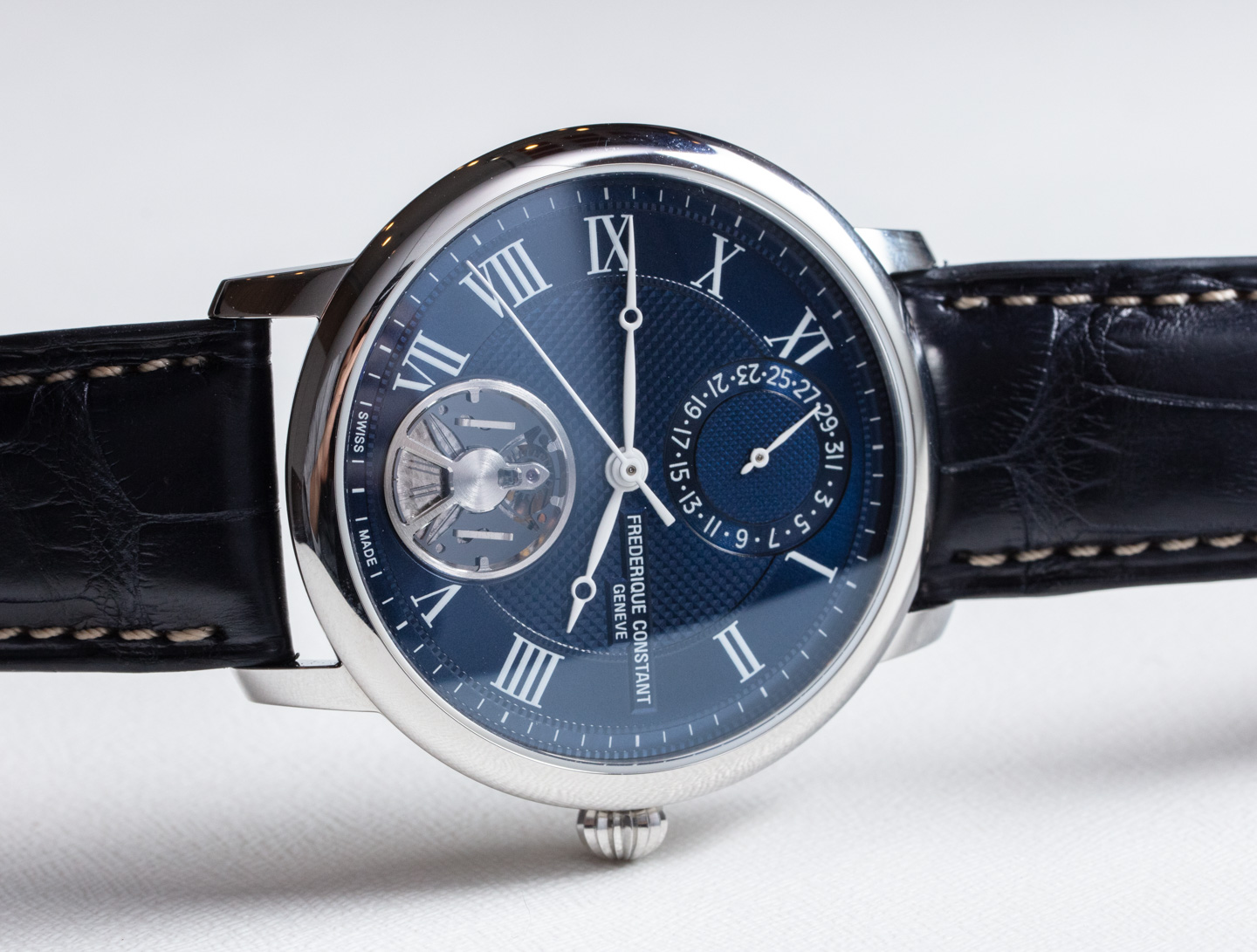 Currently, Frederique Constant produces the Slimline Monolithic Manufacture watch in three versions. Those include the references FC-810MC3S6 (silver dial) and FC-810MCN3S6 (blue dial) in steel and an 18k rose gold version (rather fairly priced at $15,995, if you ask me) as the reference FC-810MC3S9. The cases themselves are 40mm-wide and more or less represent an iconic Frederique Constant look with the Slimline Manufacture case and dial design. In many ways, the Slimline Monolithic Manufacture watches are the same as those without the new silicon parts, so the addition is mostly technical. What does give away that these watches are special is the view at 6 o’clock of what clearly isn’t your typical regulation system with an oscillating wheel and hairspring.

Indeed, the entire Monolithic watch is really a modified version of what Frederique Constant already produces, but now harnessing some very new and powerful technology. The in-house automatic caliber FC-810 movement is a modified version of the in-house FC-710 with a totally reworked regulation system. Otherwise, most of the movement and running train are the same, preserving the complications that include central minutes, hours, and seconds, along with a subsidiary date display (now under the 12 o’clock position, as opposed to over the 6 o’clock position on the dial). 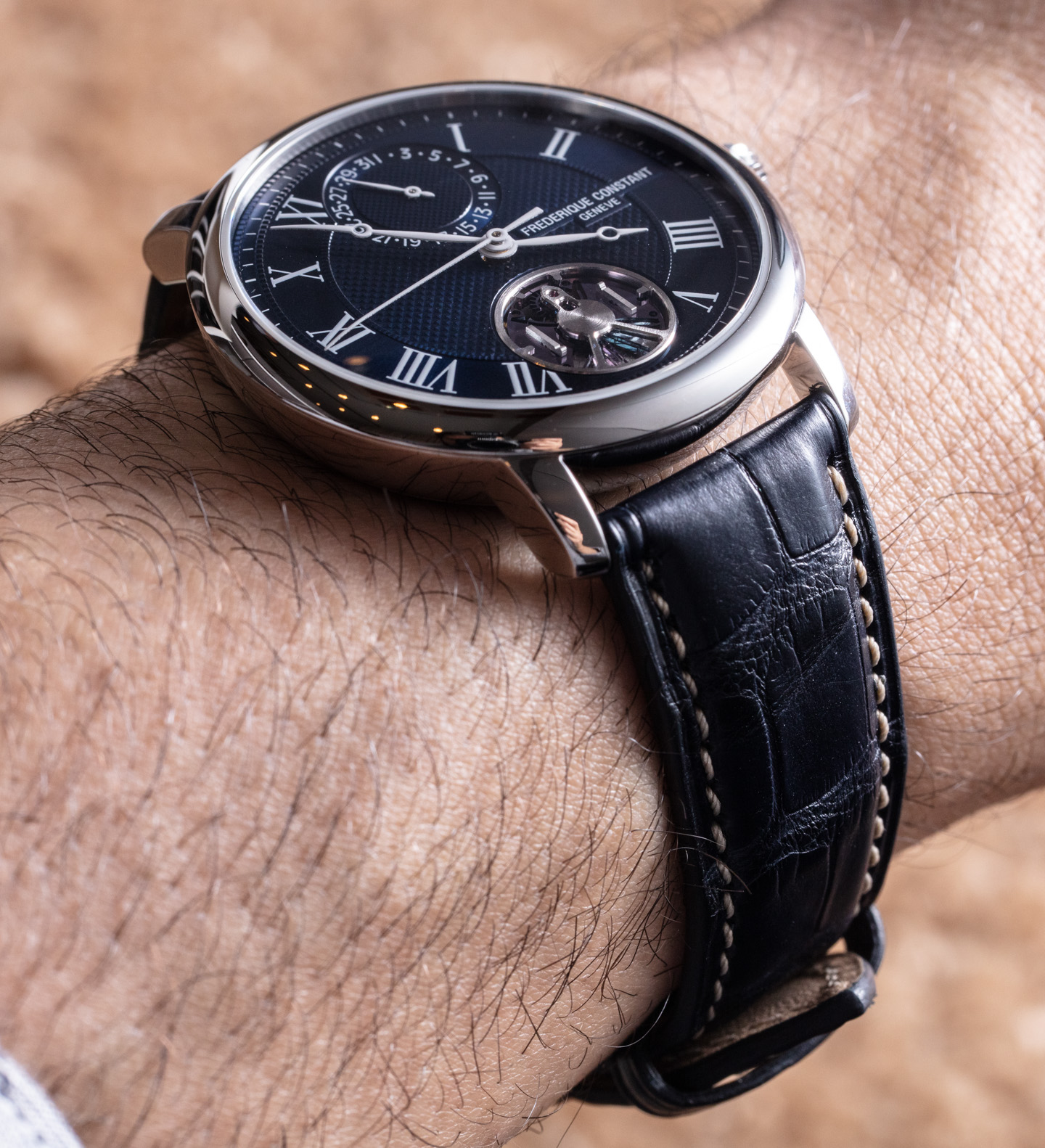 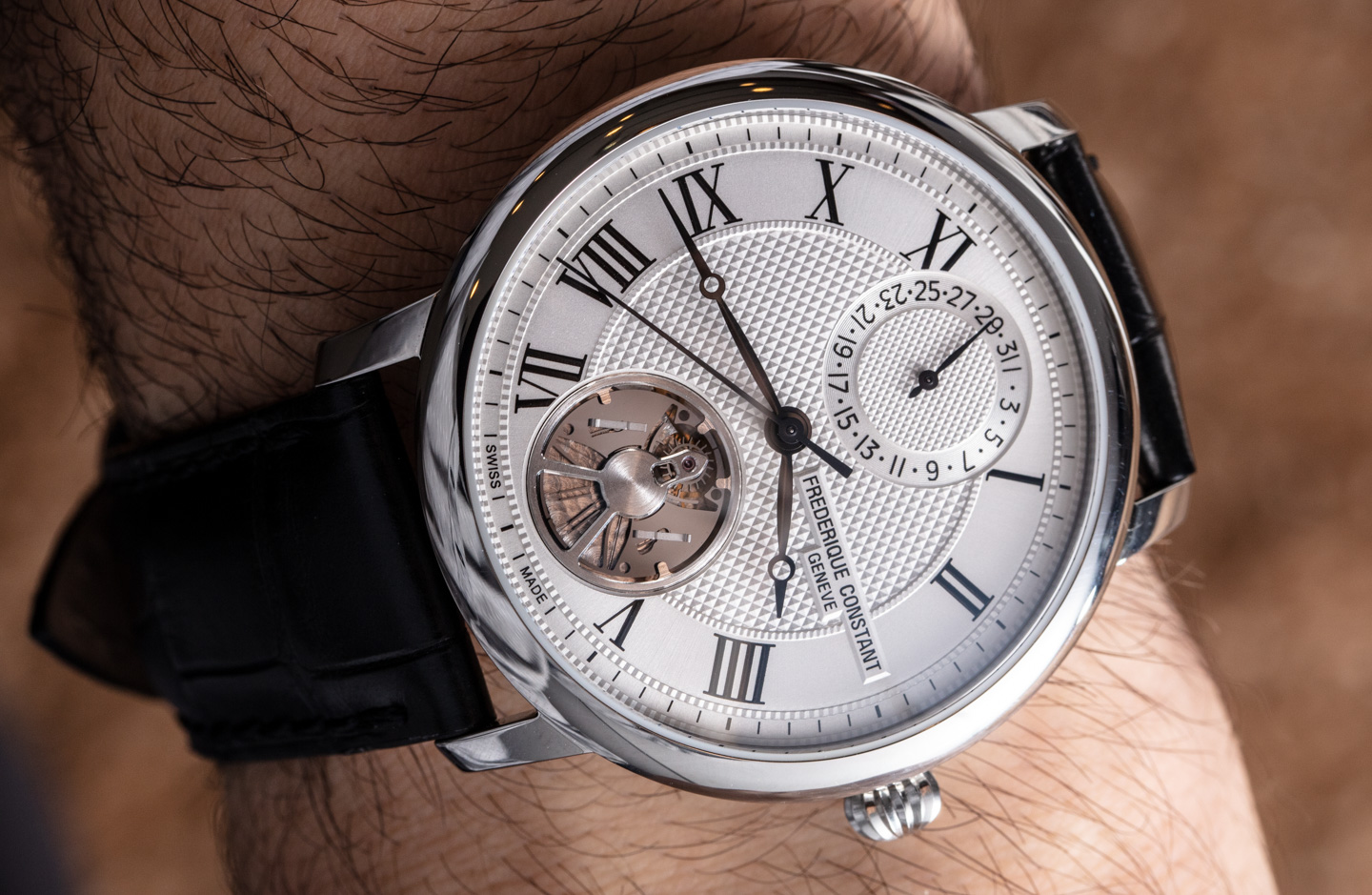 The new part is the in-house movement including a one-piece (i.e. “monolithic”) silicon component that replaces the entire regulation system (there is one main silicon part, but there is at least one other part in silicon, too, in the form of the escapement wheel). This is doable because silicon can bend and flex much more so than metal. This fact, combined with some truly amazing manufacturing techniques that allow for extreme detail, allows for a single component to replace an entire family of other components. In manufacturing, this is a good thing because efficiency and better machines are often the result of using fewer parts to accomplish the same tasks.

What makes Frederique Constant’s silicon system interesting is that we aren’t merely talking about the same component produced in silicon that was previously produced in metal. That is how most other silicon-component watches are designed, where previously metal oscillators are now in silicon. This certainly has advantages in performance, but from an operational standpoint, a watch with a metal (versus silicon) balance wheel behaves similarly, often moving at a frequency of 4Hz (28,800 beats per hour). How does Frederique Constant increase this operational frequency to 40Hz (288,000 beats per hour)? 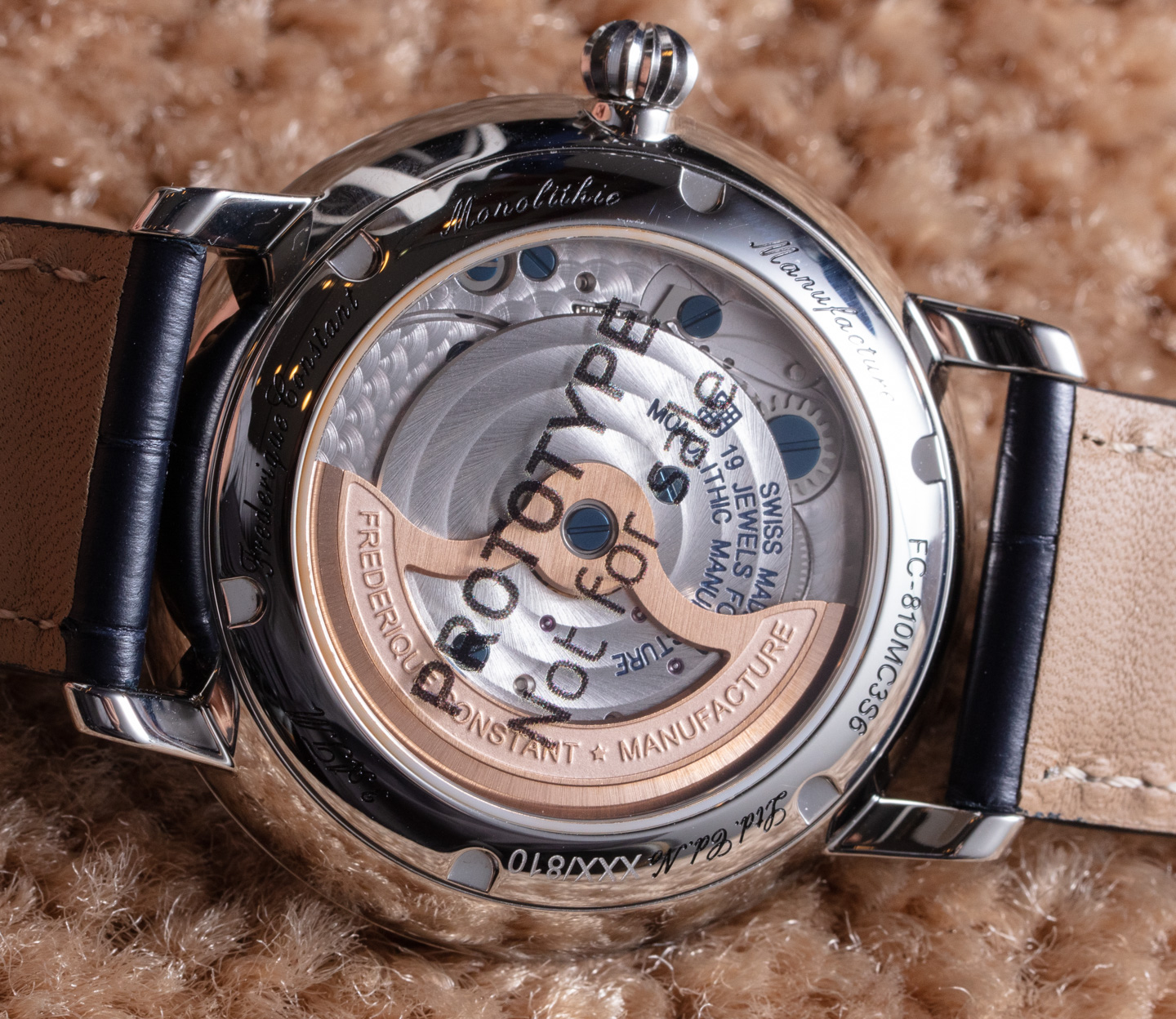 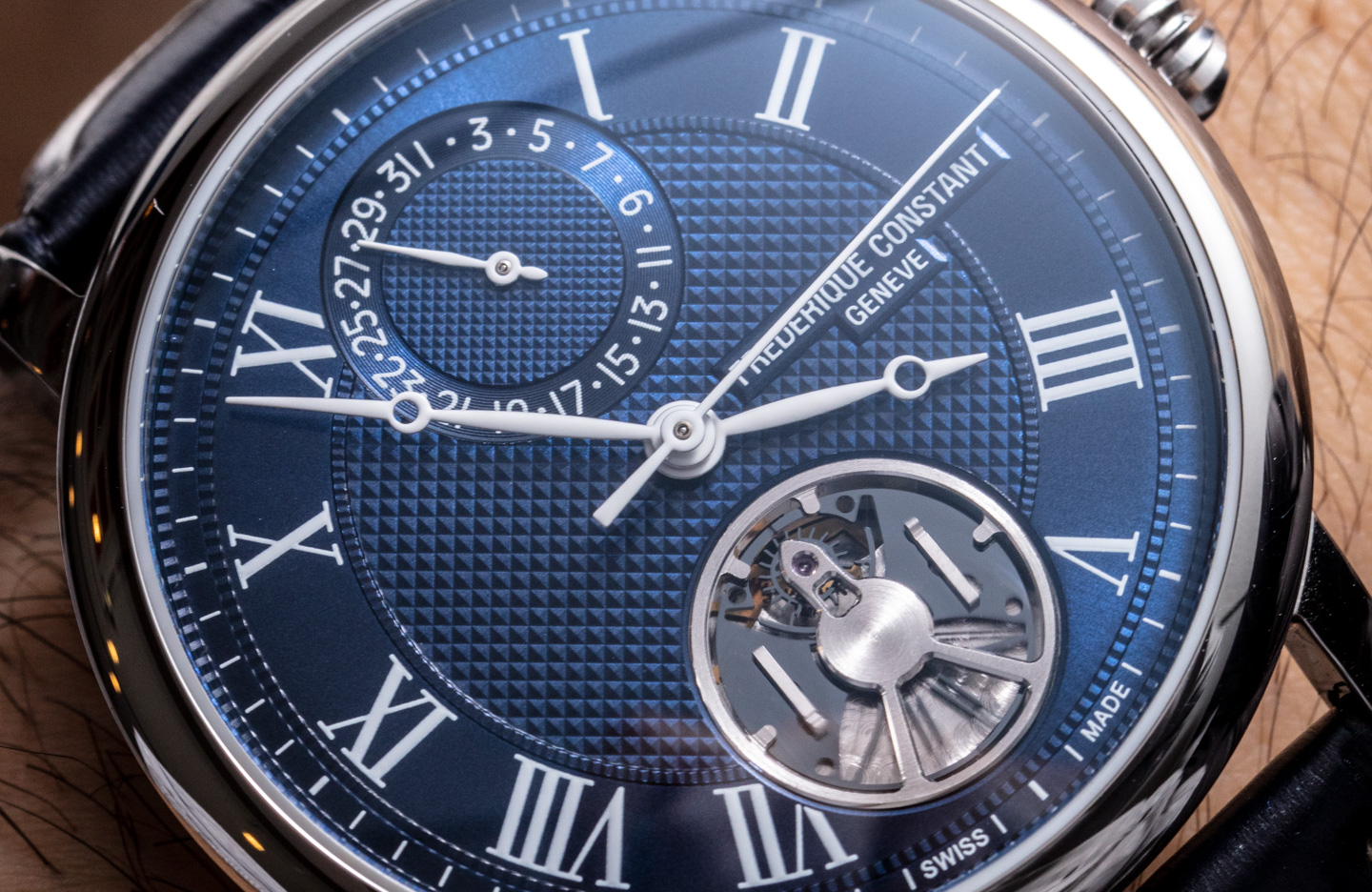 An increase in operations frequency means that the watch is able to average out many more timing errors, resulting in more accurate timekeeping over time. This is in addition to silicon’s natural tendency to be immune from magnetic fields, experience very little interruption by differences in temperature, and require little or no lubrication. With the Frederique Constant Slimline Monolithic Manufacture, the FC-810 has a regulation system that operates totally differently than traditional mechanical watches. The standard oscillating wheel has been replaced by a specially engineered piece of silicon that vibrates at a high rate when it receives power impulses from the unwinding mainspring. Those rapid vibrations serve to turn a small escapement wheel which is the heart of transmitting power to the rest of the movement.

The result of this 40Hz operational frequency isn’t just a theoretically more accurate movement (Frederique Constant actually doesn’t publish expected rate results), but also one for which the operating movement of the regulation system is so fast, our human eyes can barely see it moving. If a traditional mechanical regulation system appears to “beat,” then the regulation system developed by Frederique Constant appears to “buzz.” It’s a neat visual effect and the result of what can be achieved through novel uses of silicon produced into exotic shapes for these niche purposes. 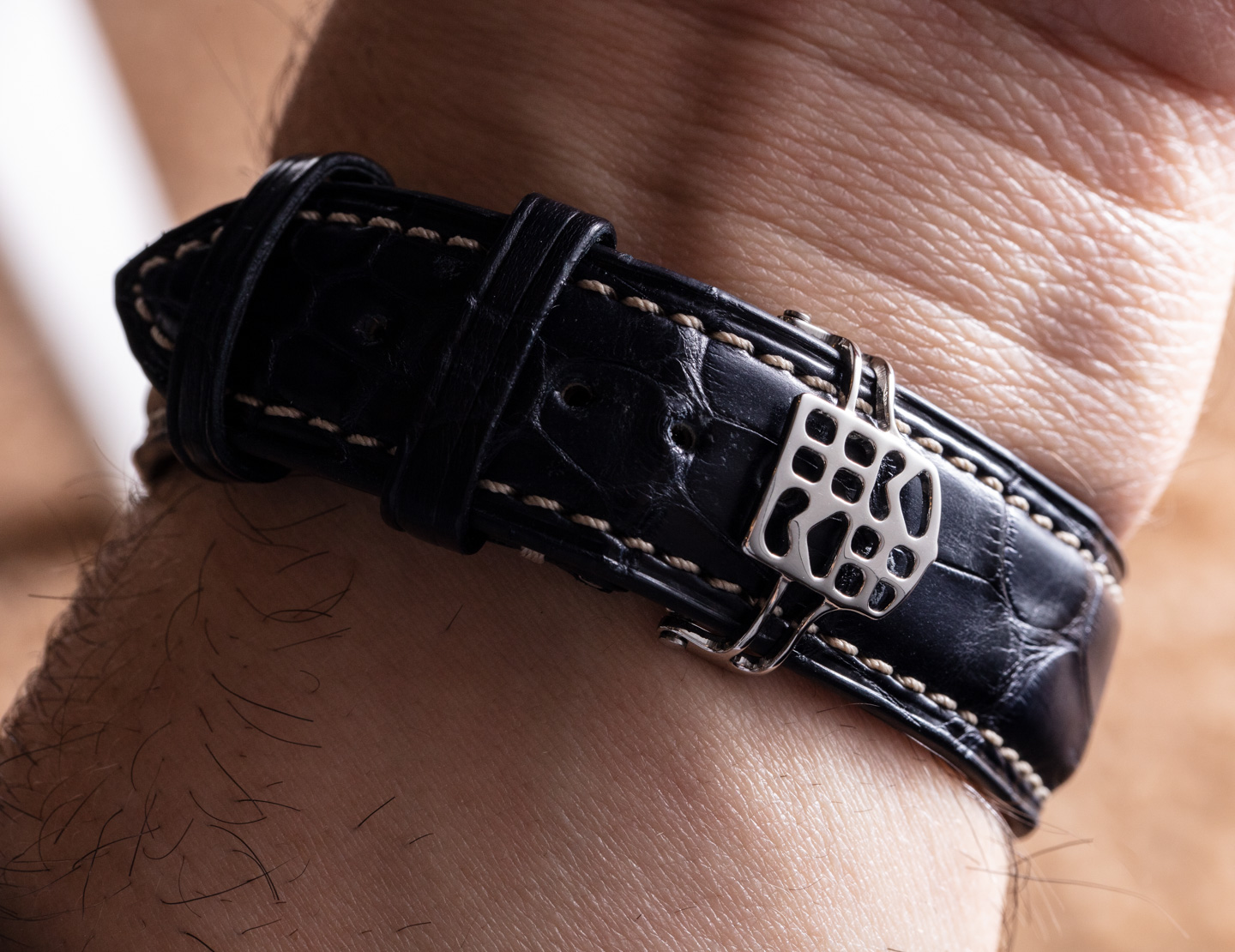 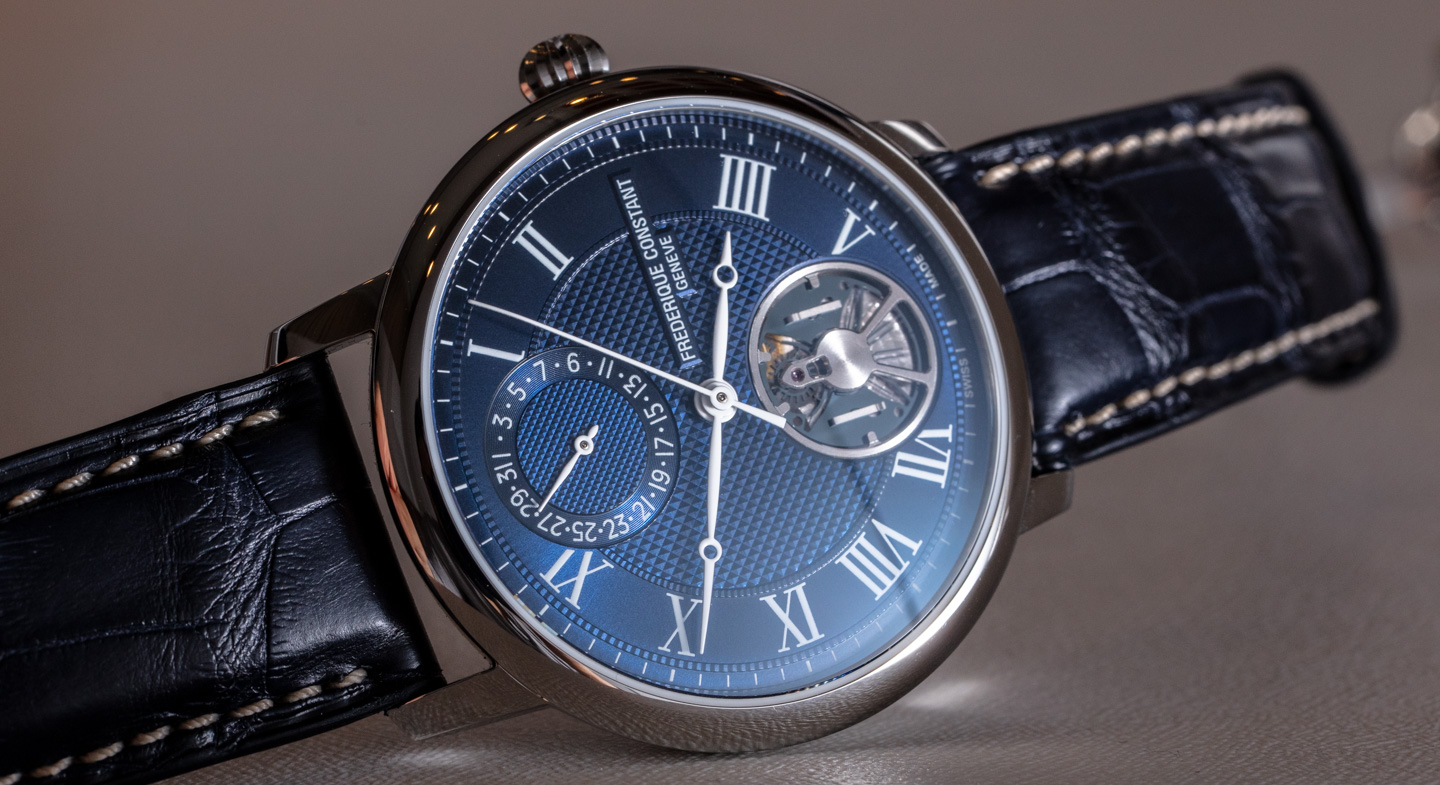 While Frederique Constant is today owned by Japan’s Citizen Group, the Swiss brand was originally founded by the Dutch Entrepreneur Peter Stas and his wife. Their head of technical development Pim Koeslag is also Dutch, and it thus makes sense that the special supplier they worked with to produce these silicon components is also Dutch. That company is called Flexous, and it is known as a “Horology Technology Company.” Flexous produces the silicon parts for Frederique Constant, but I understand that the design of the monolithic silicon regulation system was, in large part, developed in-house at the watch brand in Geneva.

What I think is even more interesting is how power-efficient the FC-810 automatic movement is. Very little power needs to be channeled to the monolithic silicon regulation system for it to operate. So despite its fast 40Hz operating speed, the movement has 80 hours of power reserve in a single mainspring barrel. The movement is also nicely polished with perlage, blue screws, and other decorative features that beguile this product as a classy (versus highly contemporary) timepiece product. 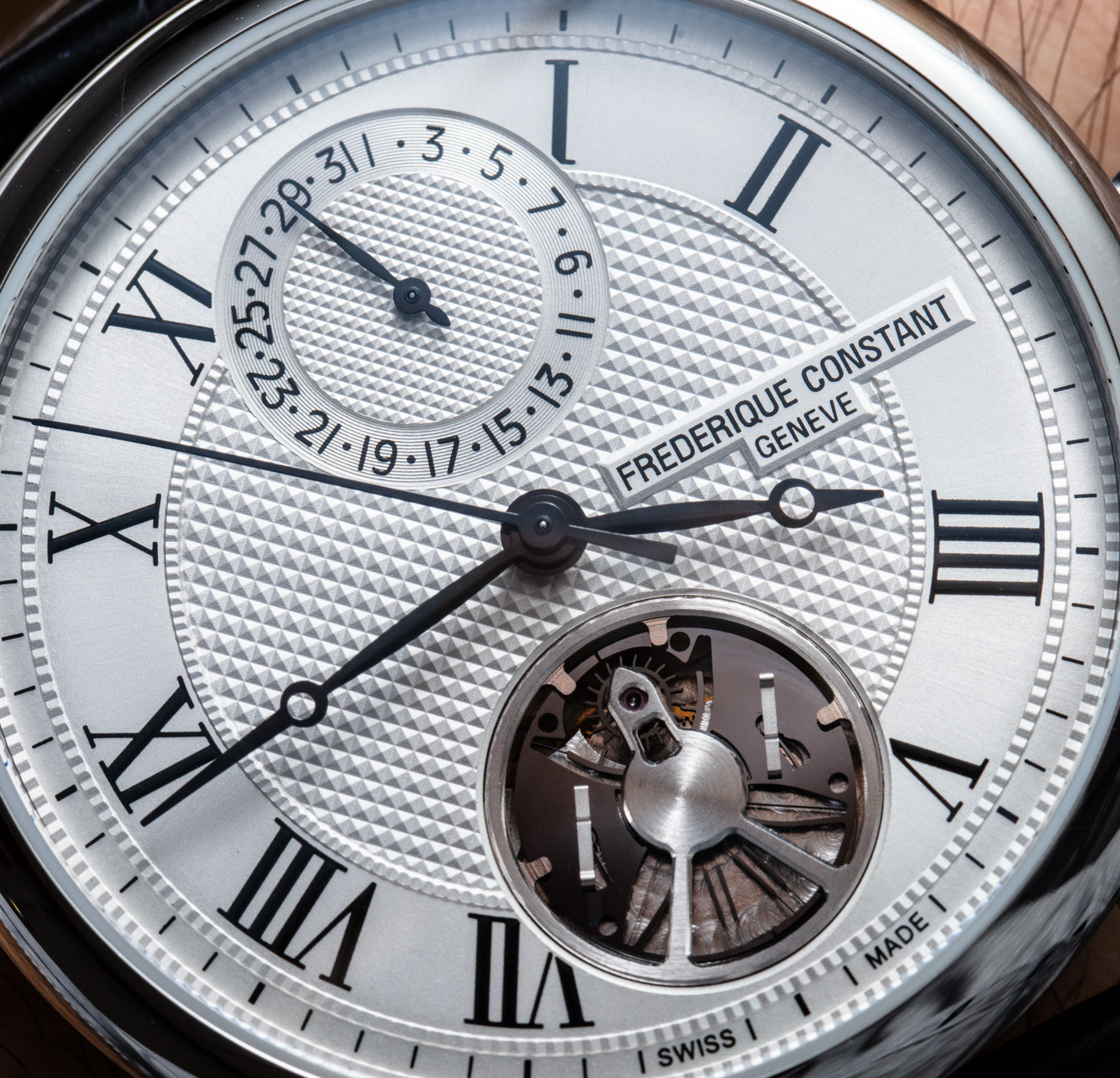 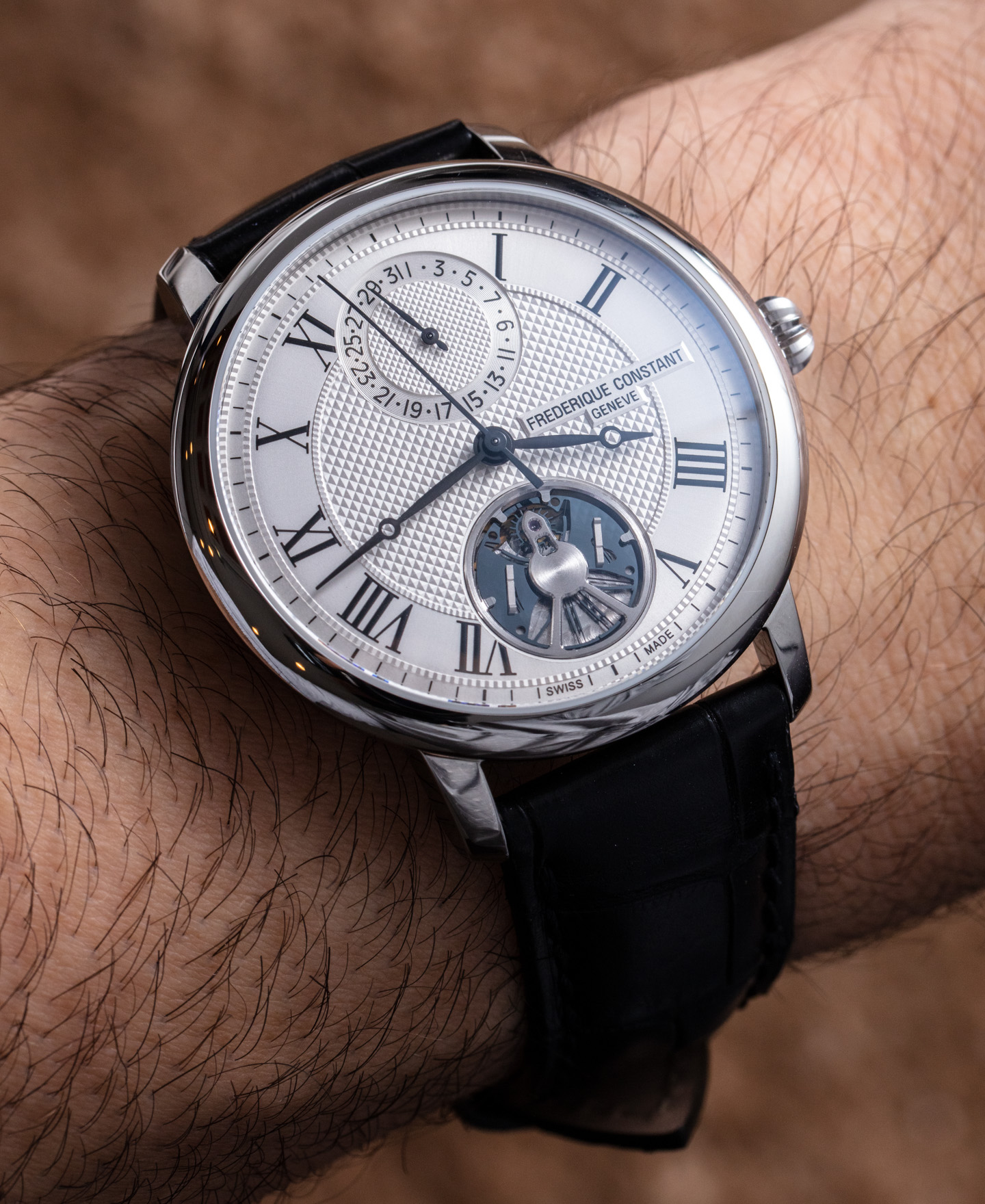 Silicon watch parts started with the controversial Ulysse Nardin Freak back around 2001. Over the last 20 years, we have seen an enormous variety of silicon components being used in watches from the world’s most popular brands including Rolex and Patek Philippe. Silicon as a material is here to stay in watchmaking, but that doesn’t mean innovation with the material and its usage is anywhere near being over. If anything, areas where the precision-shaping and environmental-resistance capabilities of silicon shine are only starting to be well-understood. As a company that very much values actual horology and watchmaking, it makes nothing but sense that a product like the Slimline Monolithic Manufacture comes from Frederique Constant. Now the effort is one of marketing and positioning.

The Slimline Monolithic Manufacture is a commercial success given that it really doesn’t have any competition in the market at this price point and because there is a small enough group of watch movement nerds out there who can appreciate these in limited-edition volumes. But what comes next? I think there is a very real marketing and communication opportunity here to better tell the story of this interesting technology, as well as to include it in more contemporary watches that capture the imagination and spirit of the monolithic silicon technology better. These are very cool watches, and I look forward to seeing what Frederique Constant comes up with in this space next. The Slimline Monolithic  Manufacture watch in 18k rose gold is limited to 81 pieces; 810 pieces are available in each of the two steel-cased dial colors. Price in steel is $4,795 USD. Learn more at the Frederique Constant website here.