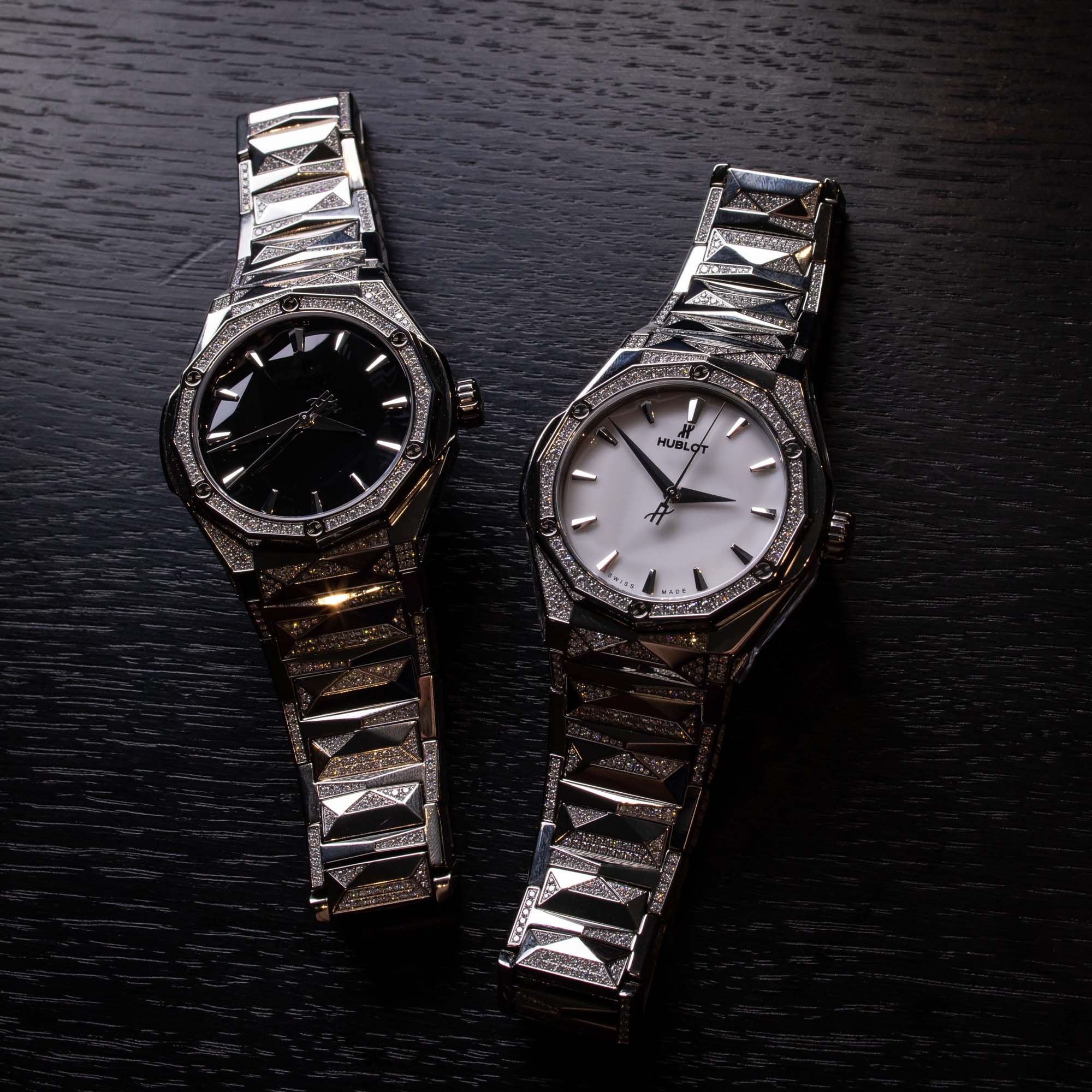 Among the novelties that were unveiled earlier this year in Geneva at Watches and Wonders 2022, Hublot debuted the Classic Fusion Orlinski Bracelet watches, which represent the latest collaboration pieces between the manufacturer and renowned French pop artist Richard Orlinski. The partnership itself dates back to 2017, and a number of different pieces have been produced over the years that use Hublot’s instantly recognizable designs as a canvas to showcase Orlinski’s signature angular aesthetic. Despite being produced in a variety of different colors and materials, all of the previous Orlinski-inspired models have been fitted with straps. However, the latest release of Hublot Classic Fusion Orlinski Bracelet watches offers significantly more surfaces to incorporate Orlinski’s angular designs, and the end result is a dynamic and striking timepiece with an integrated bracelet that brings one of Richard Orlinski’s sculptures and puts it on your wrist. 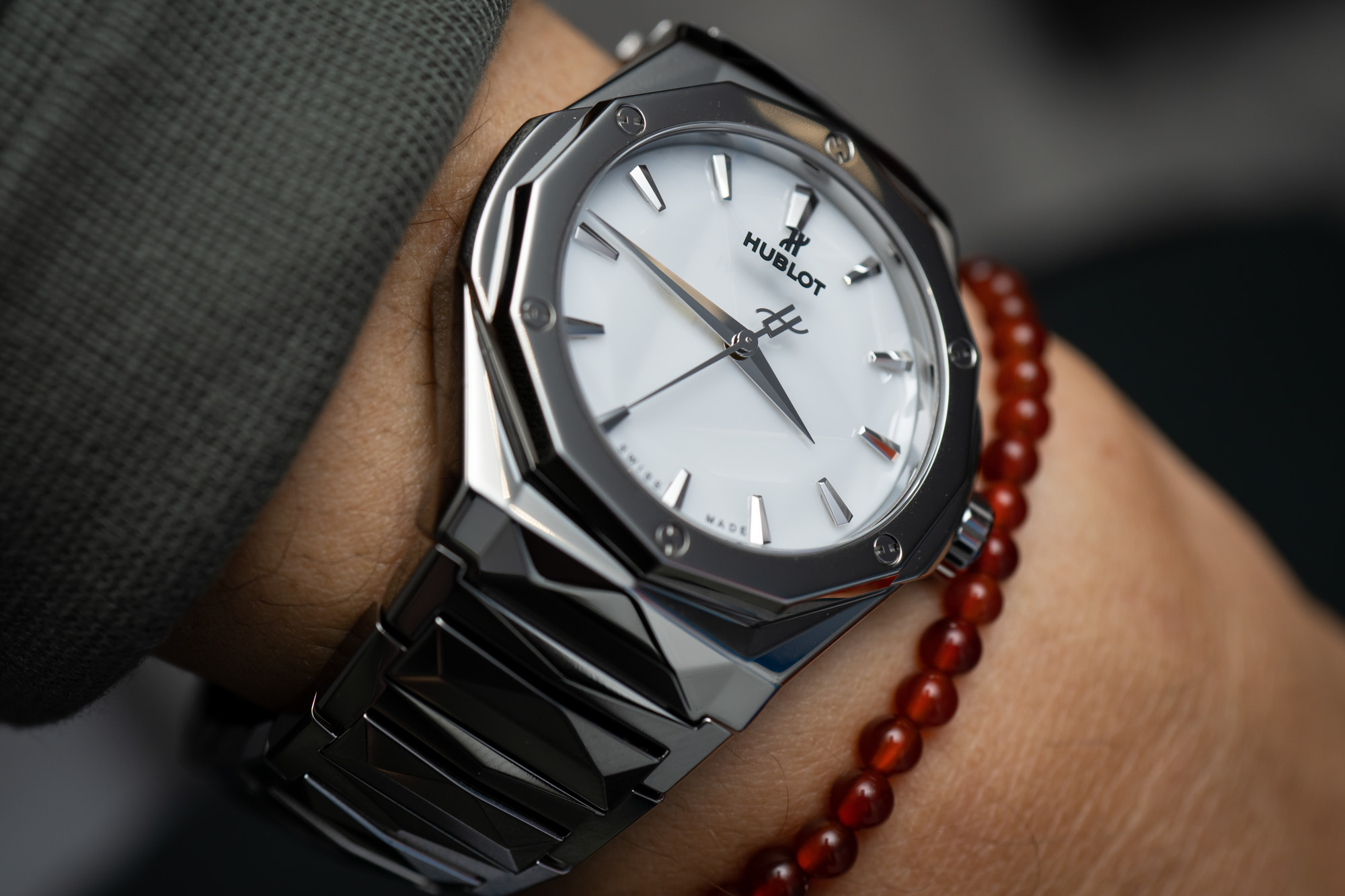 While the various Orlinski Hublot models crafted from colored ceramic arguably offer the most visual similarities to the artist’s works due to their bold solid-color designs, the rubber straps and clasps fitted to them don’t quite offer the same Orlinski-inspired aesthetic. Rather than continuing the angular design established by the case and dial, the straps are smooth rubber and fitted with deployant style clasps that were largely similar to what you might find on other Hublot Classic Fusion models. The titanium integrated bracelets fitted to the Hublot Classic Fusion Orlinski Bracelet watches allow the brand to continue the angular design throughout the entirely of its links, and the butterfly style clasp fitted to it means that that the Orlinski design extends around the entirely of the watch’s external surfaces, fully realizing the concept of creating a Richard Orlinski sculpture for the wrist. 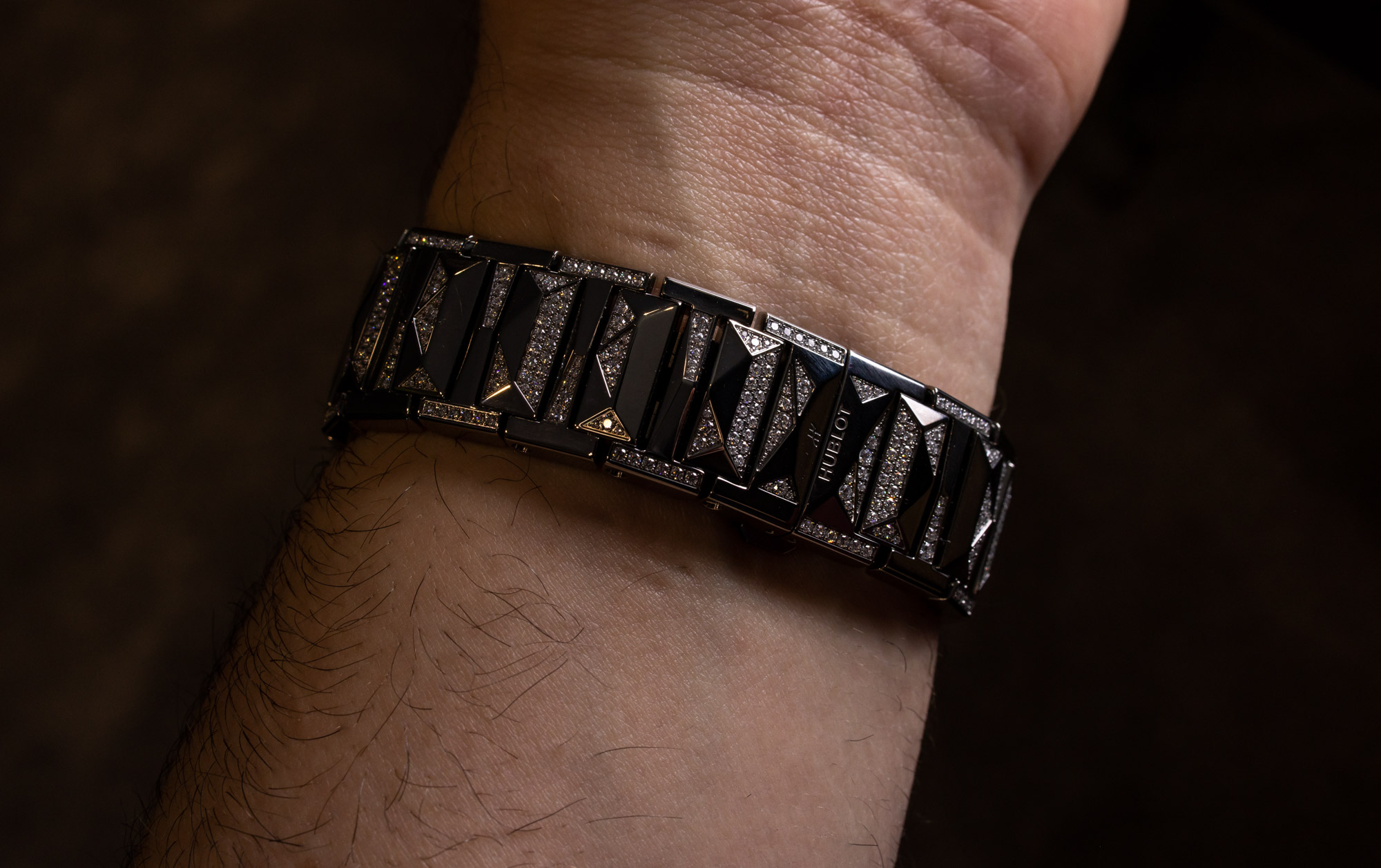 The case of the Hublot Classic Fusion Orlinski Bracelet watches are crafted from grade 5 titanium, and measure 40mm-wide by 11.1mm-thick. While the standard model features polished titanium surfaces, Hublot also offers “Alternative Pavé” variations that have 112 diamonds set into the case, another 54 diamonds in the bezel, and an additional 486 diamonds featured throughout its integrated bracelet. While the term “iced out” certainly comes to mind when looking at the Alternative Pavé Orlinski Bracelet watches, the diamonds don’t actually cover its entire case and bracelet. Since the entire concept behind Hublot’s Orlinski models is to create timepieces that look like the artist’s works, the diamonds on the Alternative Pavé models are set in alternating geometric patterns that compliment the angular designs of the case and bracelet links. Although the standard model with its polished titanium surfaces is arguably the more successful when it comes to actually looking like one of Orlinski’s sculptures, the striking appearance of the Alternative Pavé version offers a unique aesthetic in a much more jewelry-focused overall package. 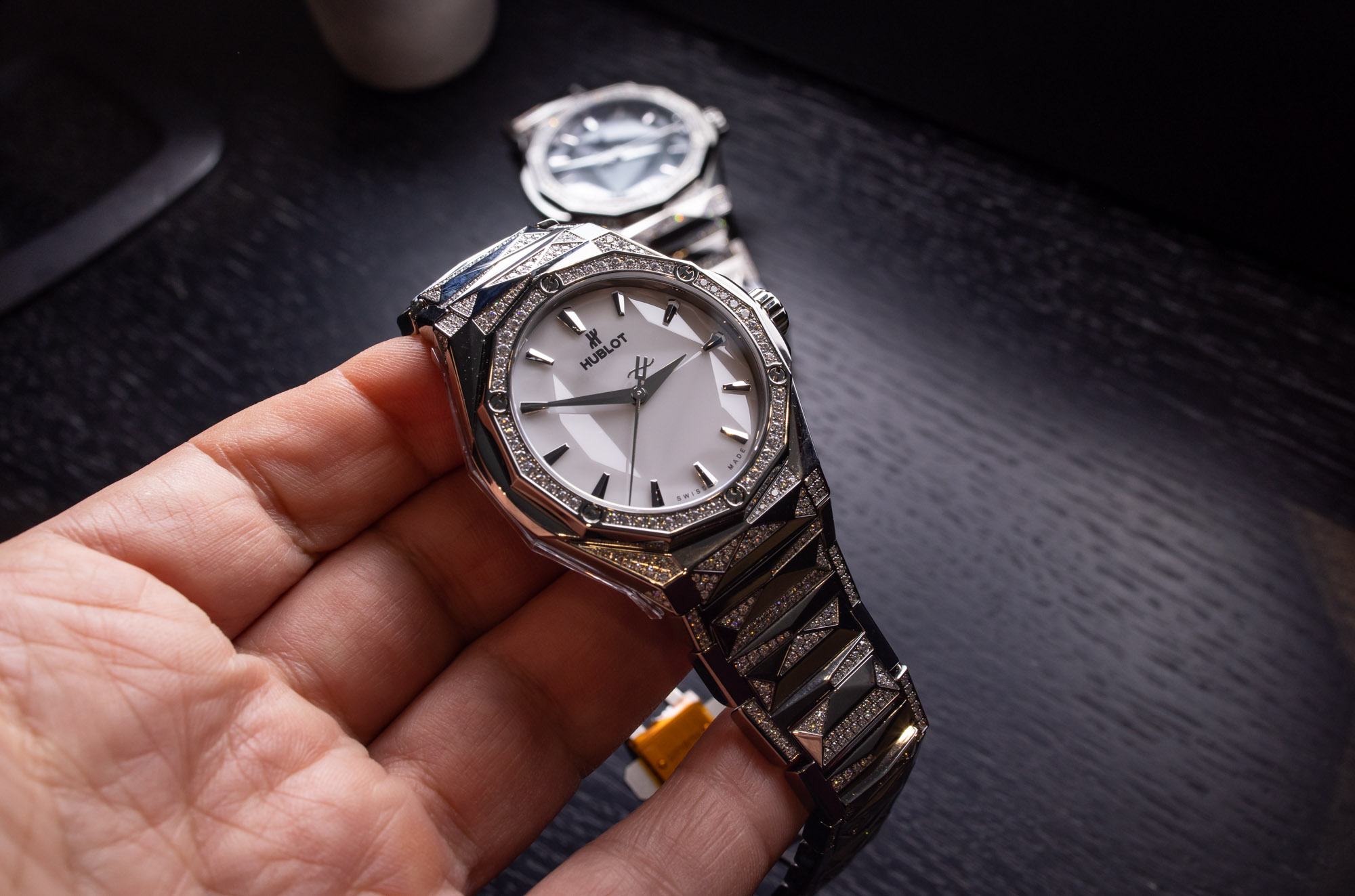 Despite the hundreds of diamonds adorning the Alternative Pavé model, all of the Hublot Classic Fusion Orlinski Bracelet watches receive the same dials, with your choice of either black or white. Crafted from ceramic in their respective colors, the dials feature a three-dimensional angular design across the entirety of their surfaces, with faceted applied hour markers and a pair of similarly faceted hour and minute hands. The seconds hand receives a large Hublot logo counterweight, while the Hublot signature at the 12 o’clock location (along with the “Swiss Made” signature at 6 o’clock) is printed on the underside of the anti-reflective coated sapphire crystal to maintain the dial’s sculptural aesthetic. Additionally, as these models are anything but tool watches and are really intended to be wearable pieces of Orlinski’s art, no luminous material is present on the hour markers or hands, which allows their uninterrupted faceted surfaces to further lend themselves to emulating Orlinski’s signature designs. 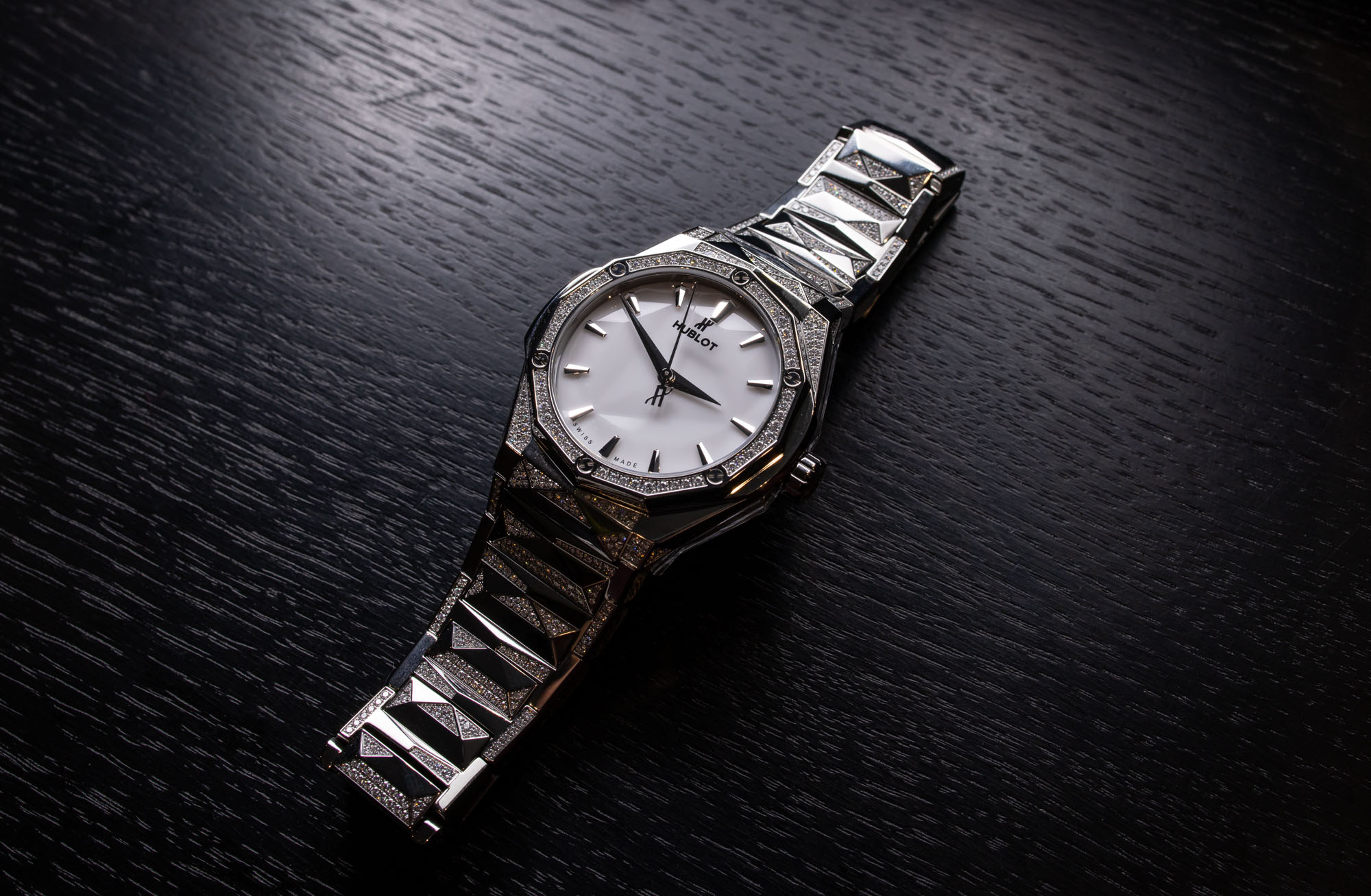 Personally, I would have loved to see Hublot omit the printing on the underside surface of the crystal altogether and just allow the logo on the counterweight of the seconds hand to serve as the only branding on the dial-side of the watch. Hublot’s signature case shape and bezel screws immediately identify it as being one of the brand’s models and the large logo on the counterweight would further confirm that should there be any doubt. However, rarely do luxury manufacturers ever not sign their own timepieces, so I entirely understand why this was done, and I can only imagine that any efforts to print the name and logo on the highly sculptural three-dimensional dial would have yielded far less legible and aesthetically pleasing results. 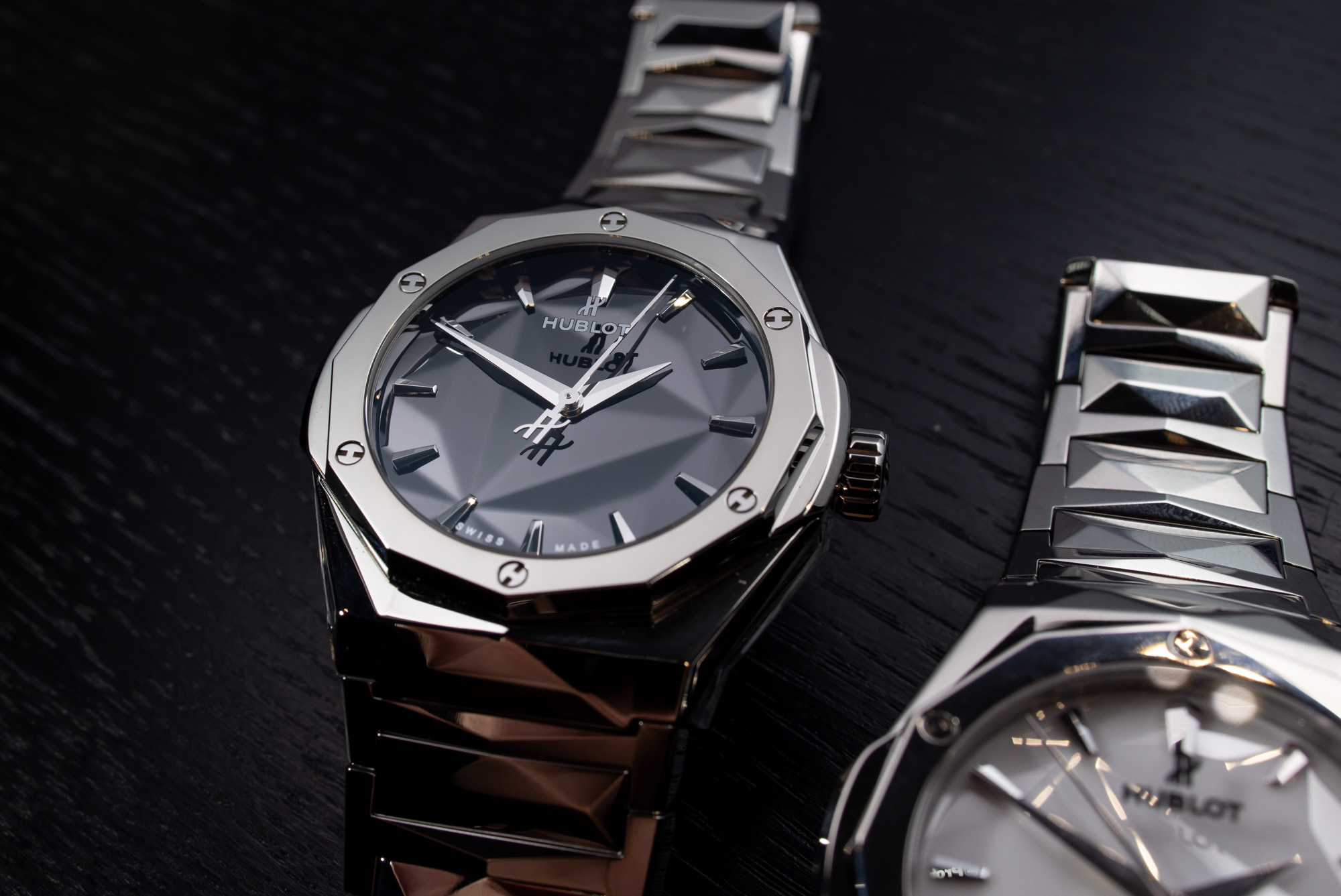 Powering the Hublot Classic Fusion Orlinski Bracelet watches is the brand’s HUB1100 self-winding movement, which is based on a Sellita SW-300 and therefore offers a similar power reserve of approximately 42 hours. Although the movement and its skeletonized rotor are visible through a sapphire caseback, the internal caliber is not the focal point of this watch, nor is it the reason that someone would actually choose to buy one of the brand’s Orlinski models in the first place. Fitting it with an expensive in-house movement would have only resulted in an even higher retail price and more expensive service costs down the road. Hublot does have in-house movements, and if the brand really wanted to power the Orlinski Bracelet range with one, that would hardly be all that complicated of a task. However, for certain watches like these, having it run on a simple and proven design that is easy and affordable to service simply makes more sense. 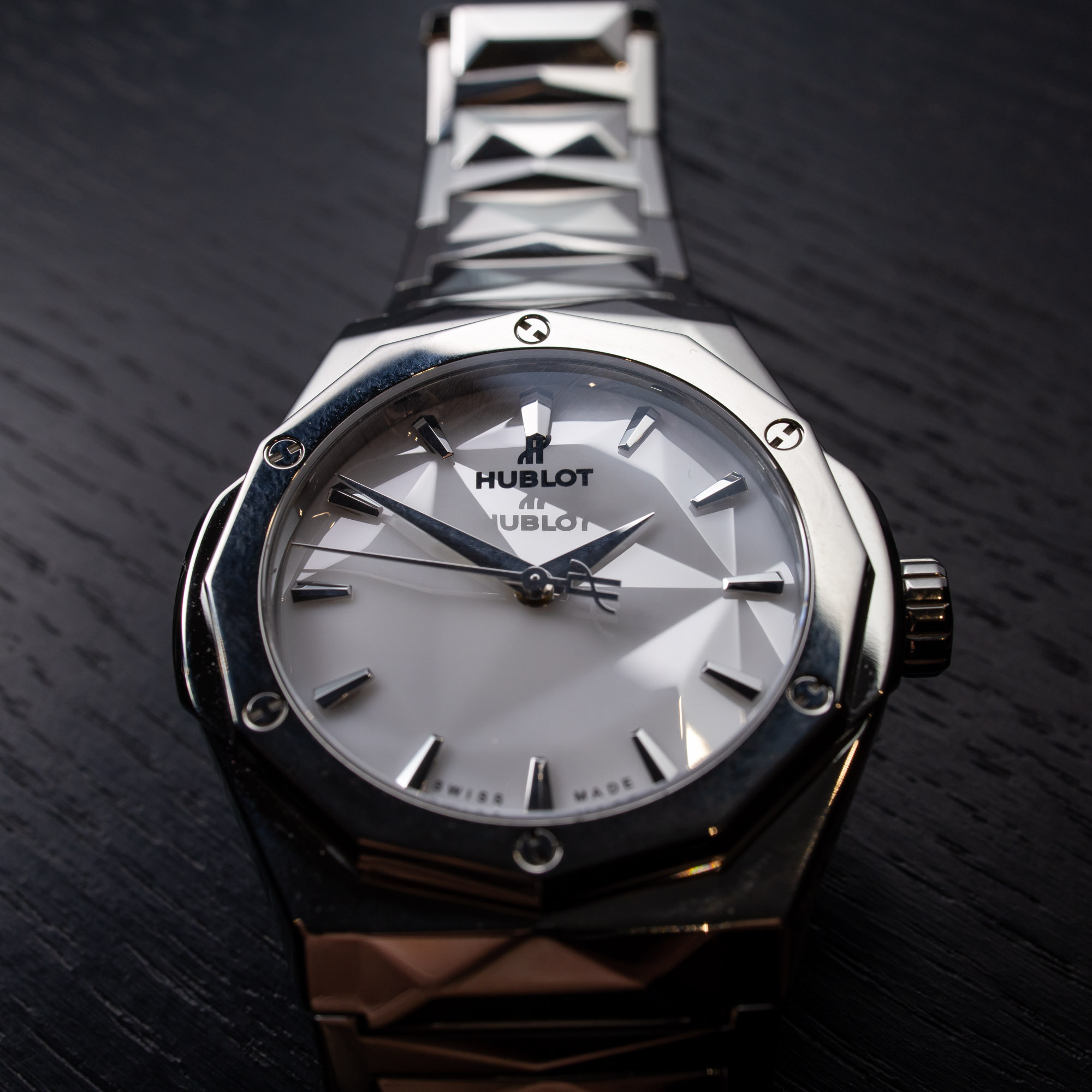 A lot of people view generic movements as being lesser than their in-house counterparts, and while many in-house designs are able to offer expanded functionality or achieve higher performance metrics, the use of a proven and well-known generic base movement should be viewed as an intentional decision by brands, rather than automatically being regarded as them taking “the easy way out” or trying to save on production costs. Watches like the Hublot Classic Fusion Orlinski Bracelet models are not likely to be someone’s everyday timepiece, so power reserve duration is going to be of lesser importance. Additionally, given its simple three-handed functionality, there would be no real advantage of fitting it with an in-house movement, other than to give their owners a bit more bragging rights among other watch collectors. 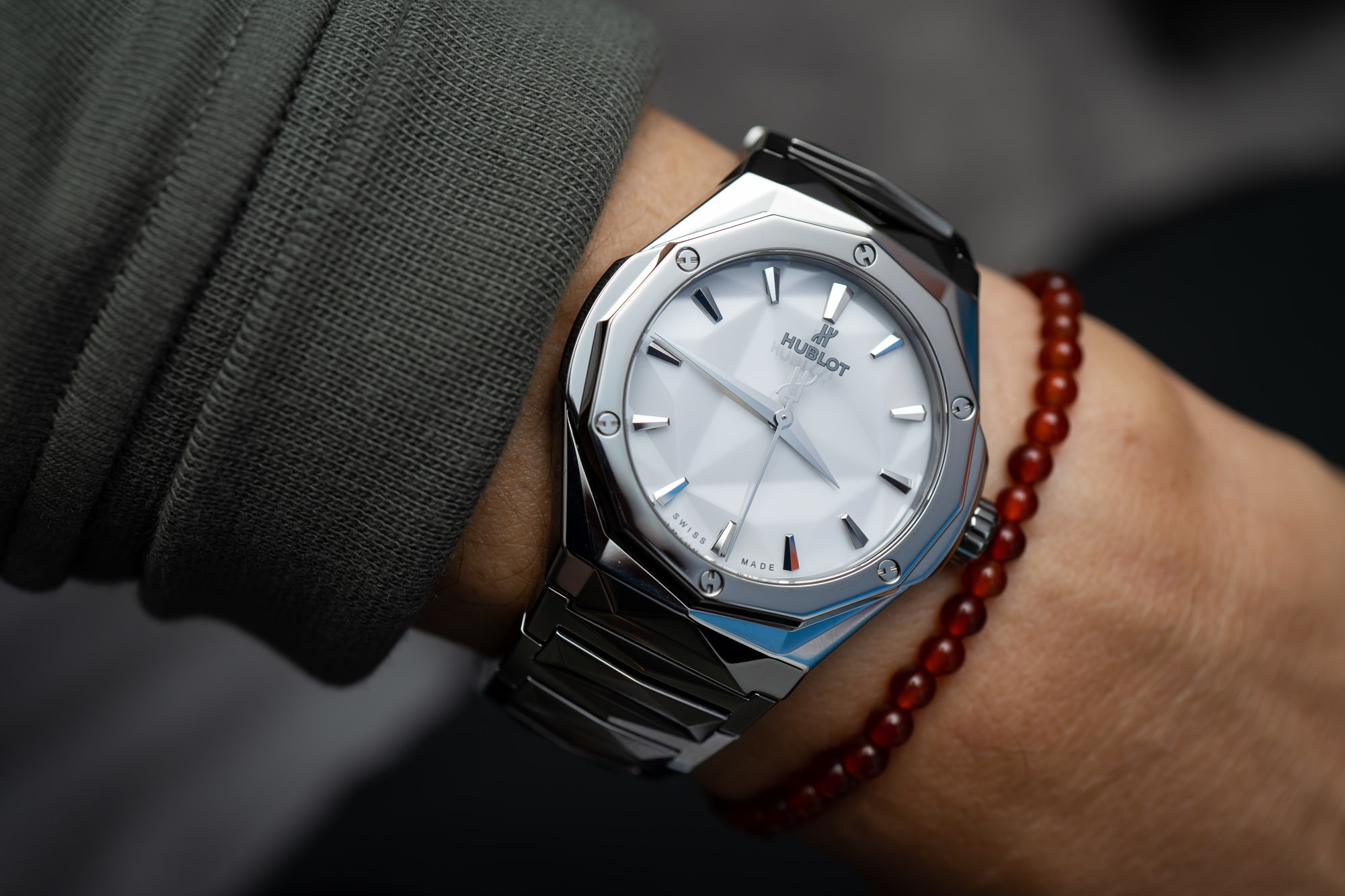 When it comes to official retail pricing, the Hublot Classic Fusion Orlinski Bracelet watches initially seem quite expensive for simple three-handed timepieces that are powered by Sellita-based movements. However, that isn’t exactly the whole story when it comes to these timepieces. The standard model is accompanied by an official retail price of $15,700 USD, while the diamond-set Alternative Pavé models will set you back $45,200 USD. As just watches, these retail prices would be rather expensive by all standards, even within the context of the greater luxury watch industry. However, when viewed within the context of being wearable Richard Orlinski sculptures that are built by one of the world’s premier luxury watch manufacturers and crafted from solid titanium, a price of less than $16k doesn’t seem quite as outrageous, considering that the artist’s works can frequently sell for tens of thousands of dollars, with the record price currently sitting at $731,047 USD for Man N°2, which was sold at Louiza Auction earlier this year in 2022. For more information, please visit the brand’s website.