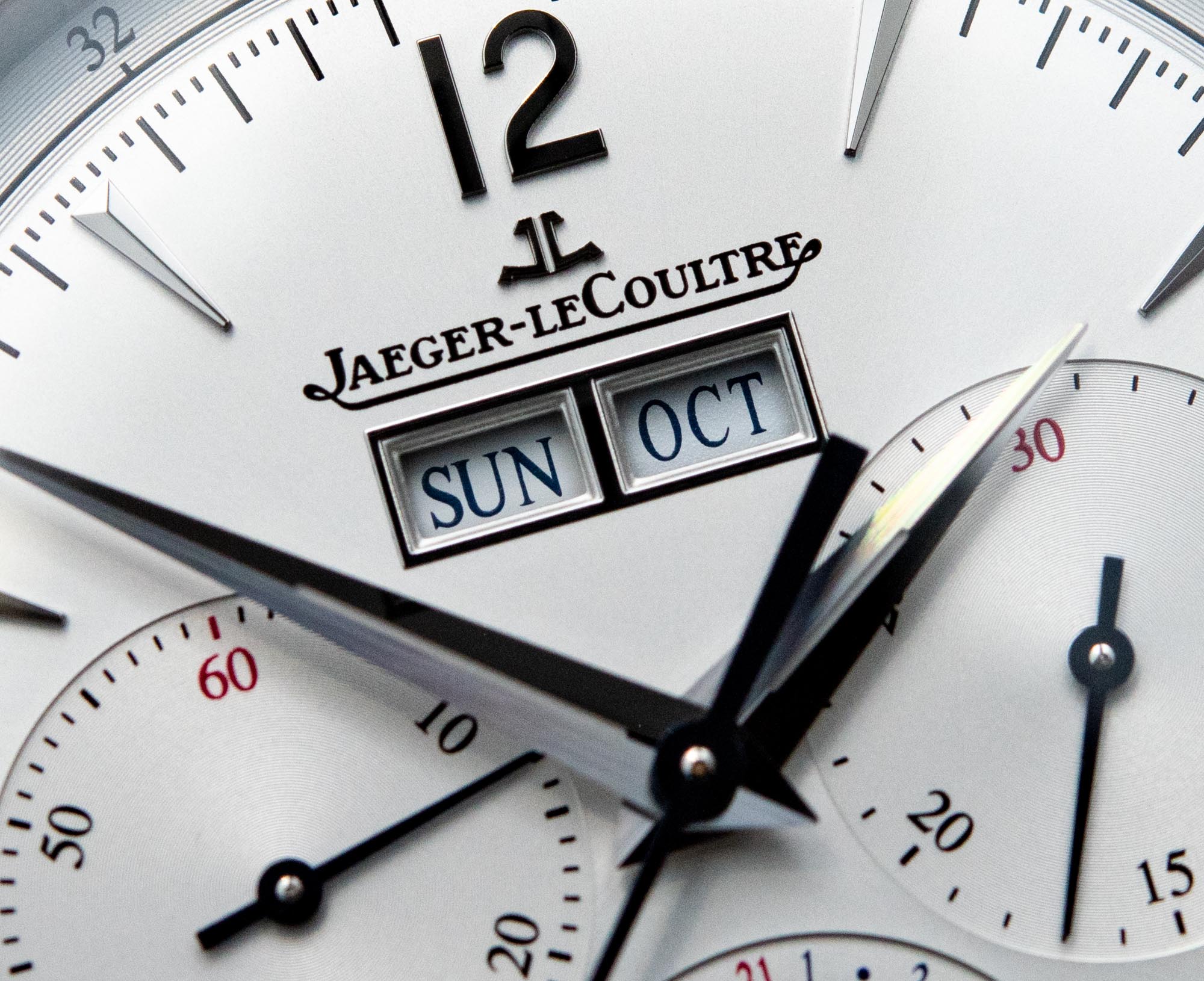 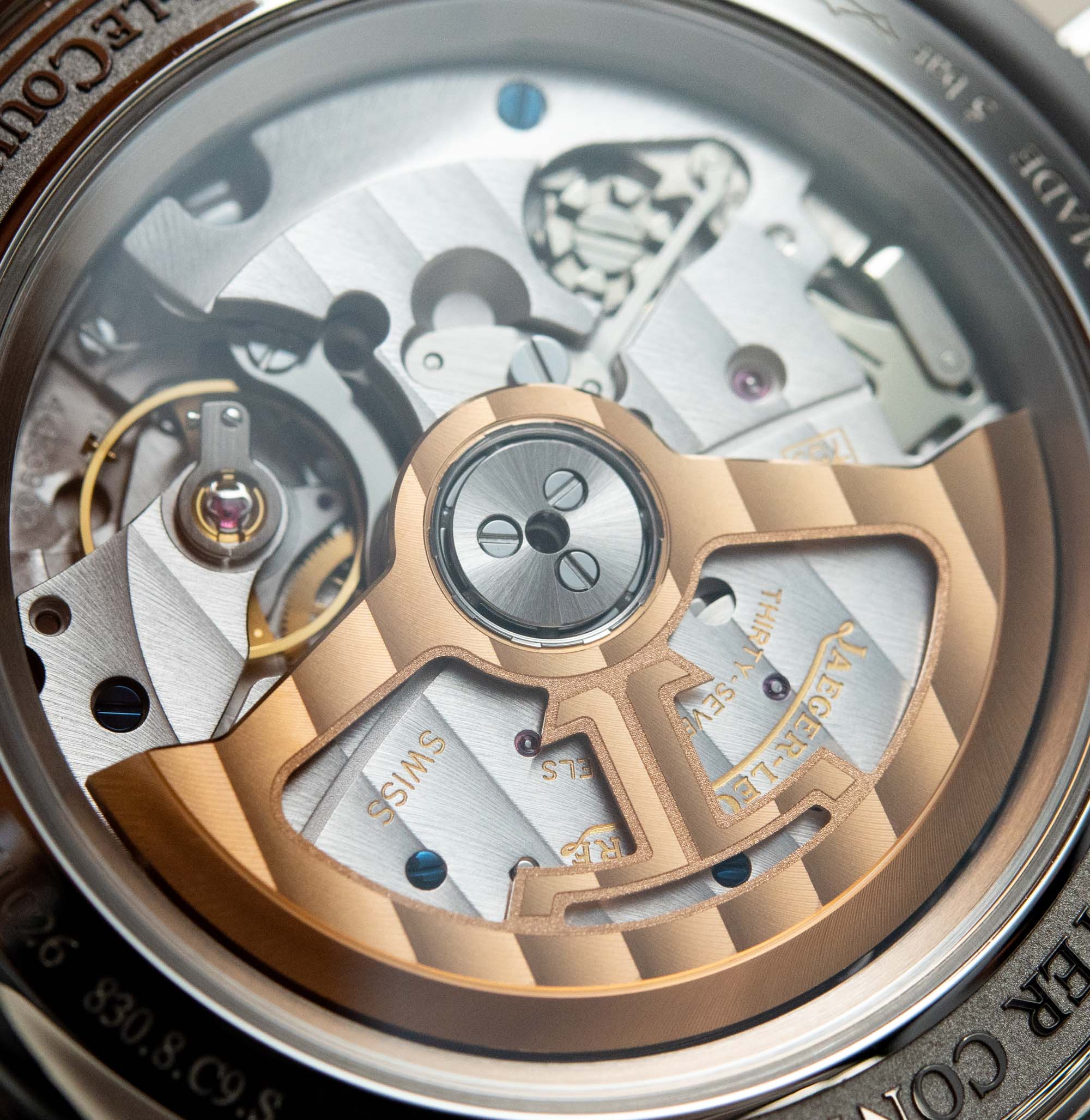 Much like the greater Swiss luxury watch industry, Jaeger-LeCoultre loves an anniversary celebration. It seems like the Reverso gets its birthday cake, five feet tall with thick glazing, every year, as do various models and collections that enjoy a ceremonial re-introduction to the brand’s lineup. Although the Jaeger-LeCoultre Master Control collection debuted in 1992, 30 years of the manufacture’s first-ever 1,000-hour tested collection missed out on some of the fanfare it had arguably earned. That said, the Master Control Chronograph Calendar, and its chronograph-less alternative that debuted at the same time, do their part in perpetuating a lot of what’s made this the watch of choice for so many in their journey through watch collecting. 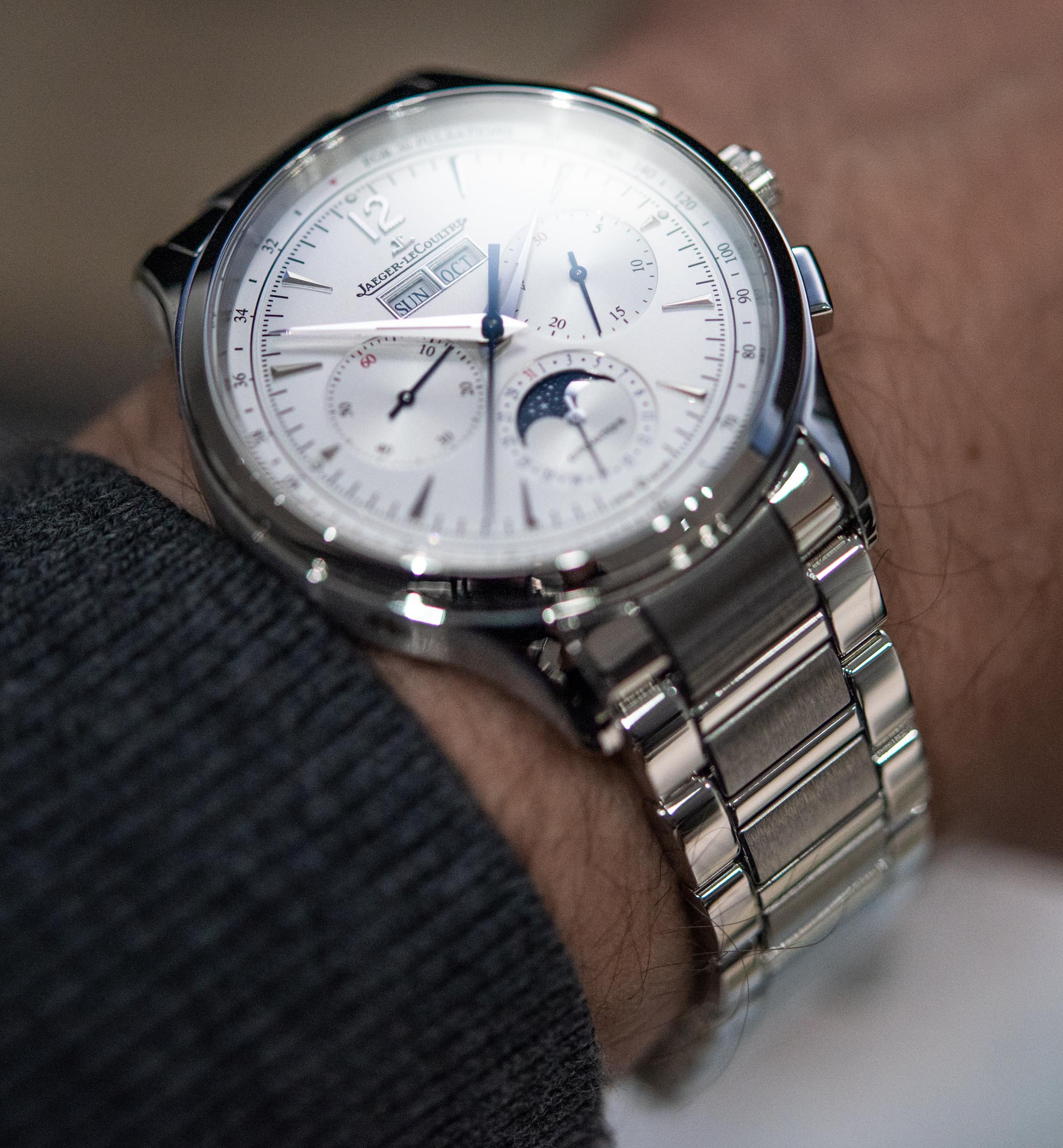 There is something about the Jaeger-LeCoultre Master Control that looks just right. It is the base SI unit of a decent Swiss-made watch. A fancy name, long and hyphenized, printed just below 12 o’clock certainly helps, but it needs to be accompanied by a host of design elements — ranging from the blatantly obvious to the cunningly discreet — to create the impression of an established Swiss luxury watch. In other words, if you were a novice watch lover who saw the Jaeger-LeCoultre Master Control Chronograph Calendar for the first time on an oversized billboard at Zürich Airport, you’d immediately recognize it as a watch that exuded quality, craft, and heritage — and all the other elevated notions folks freshly entering the world of watches are bombarded with. 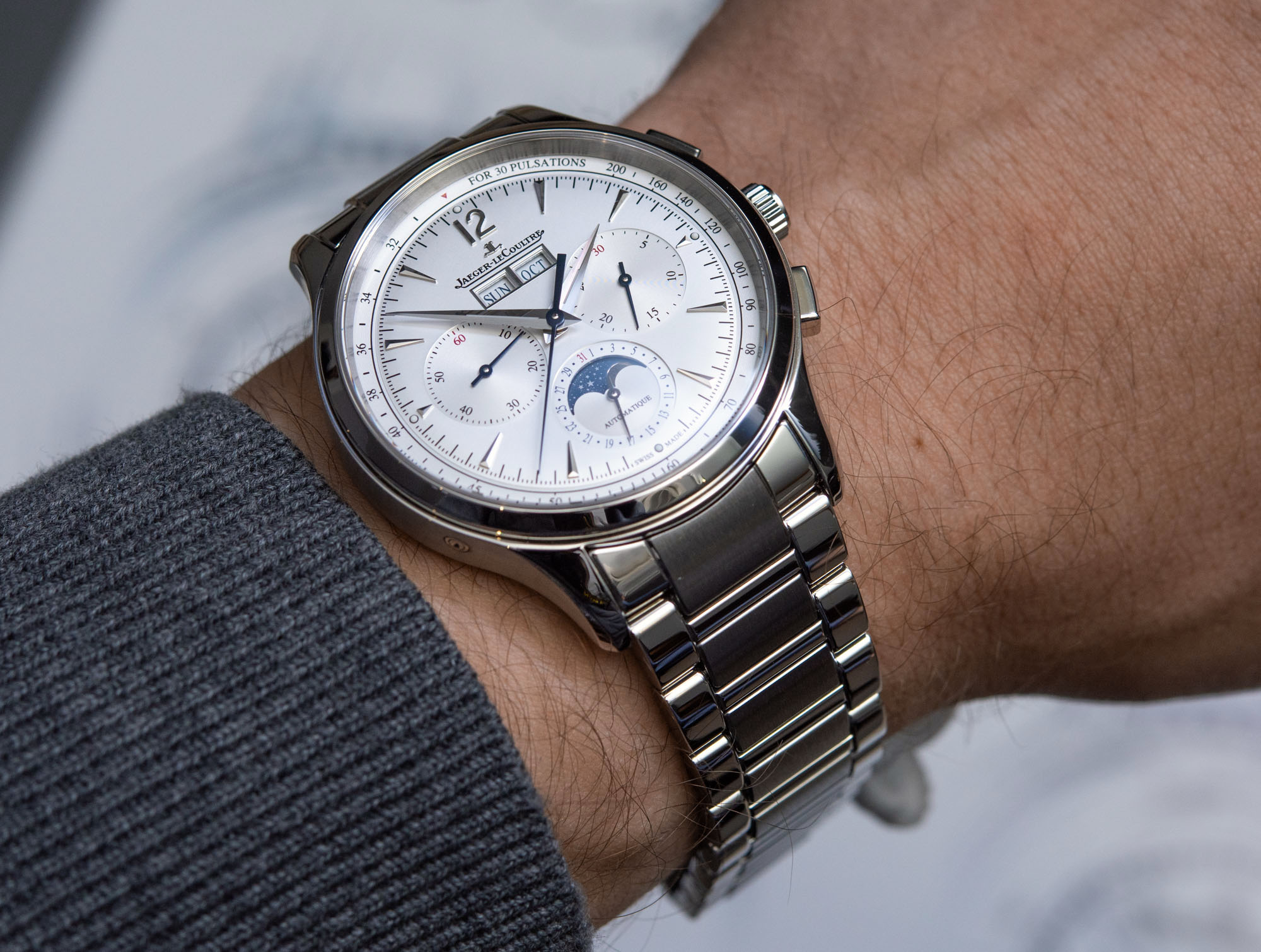 If you happen to see a Jaeger-LeCoultre boutique or one of those huge multi-brand luxury watch stores at the airport, and you get to go hands-on with the watch you just saw on that heavily photoshopped billboard, you’ll feel good about having such a talent for identifying a quality watch at first sight. Everything about the way the Jaeger-LeCoultre Master Control Chronograph Calendar feels in hand aligns with first visual impressions. Its weighty, solid, and glowing with a luster that steel with a higher-end finish gives off, so there is a lot to impress during a first encounter with the Master Control. 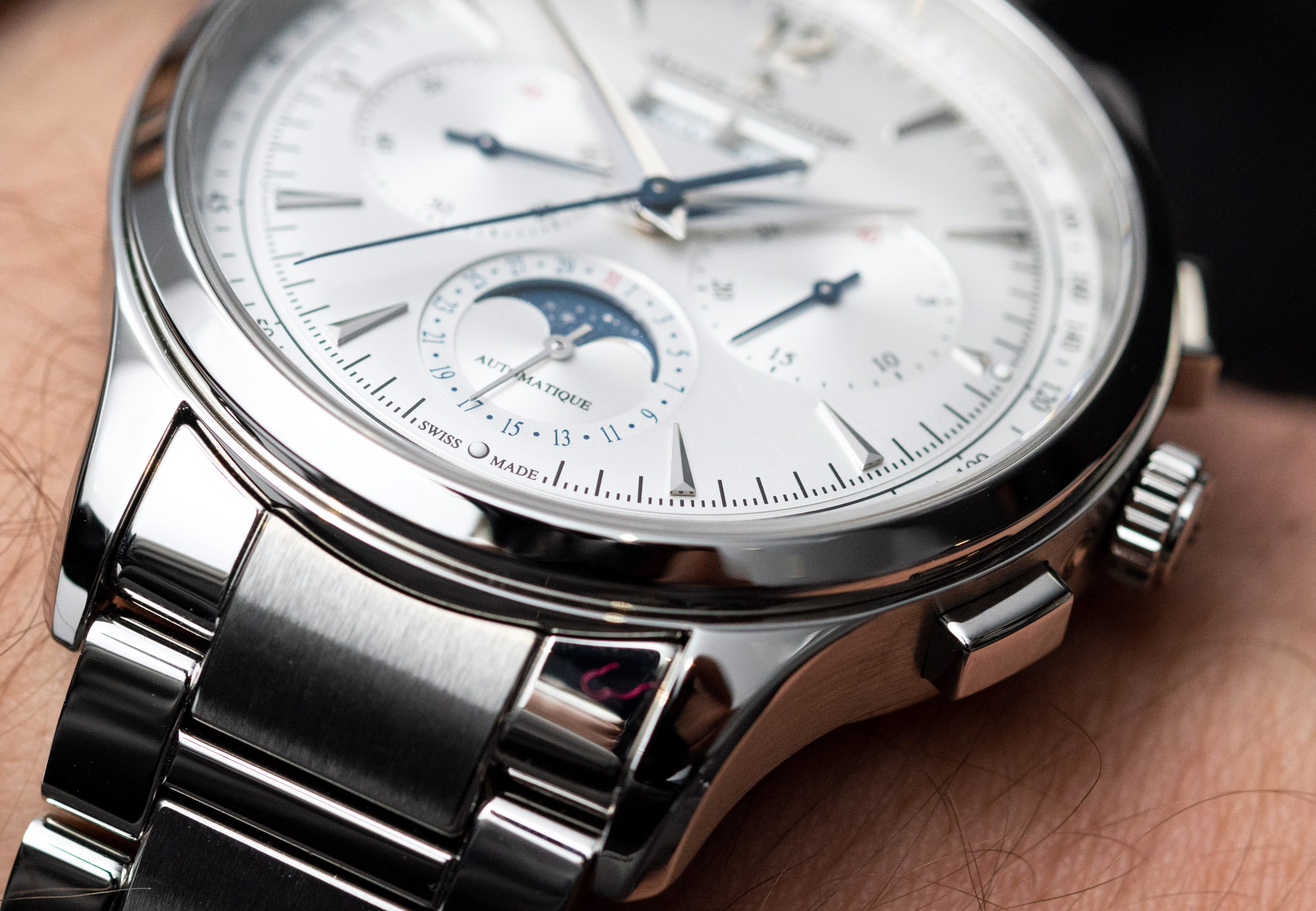 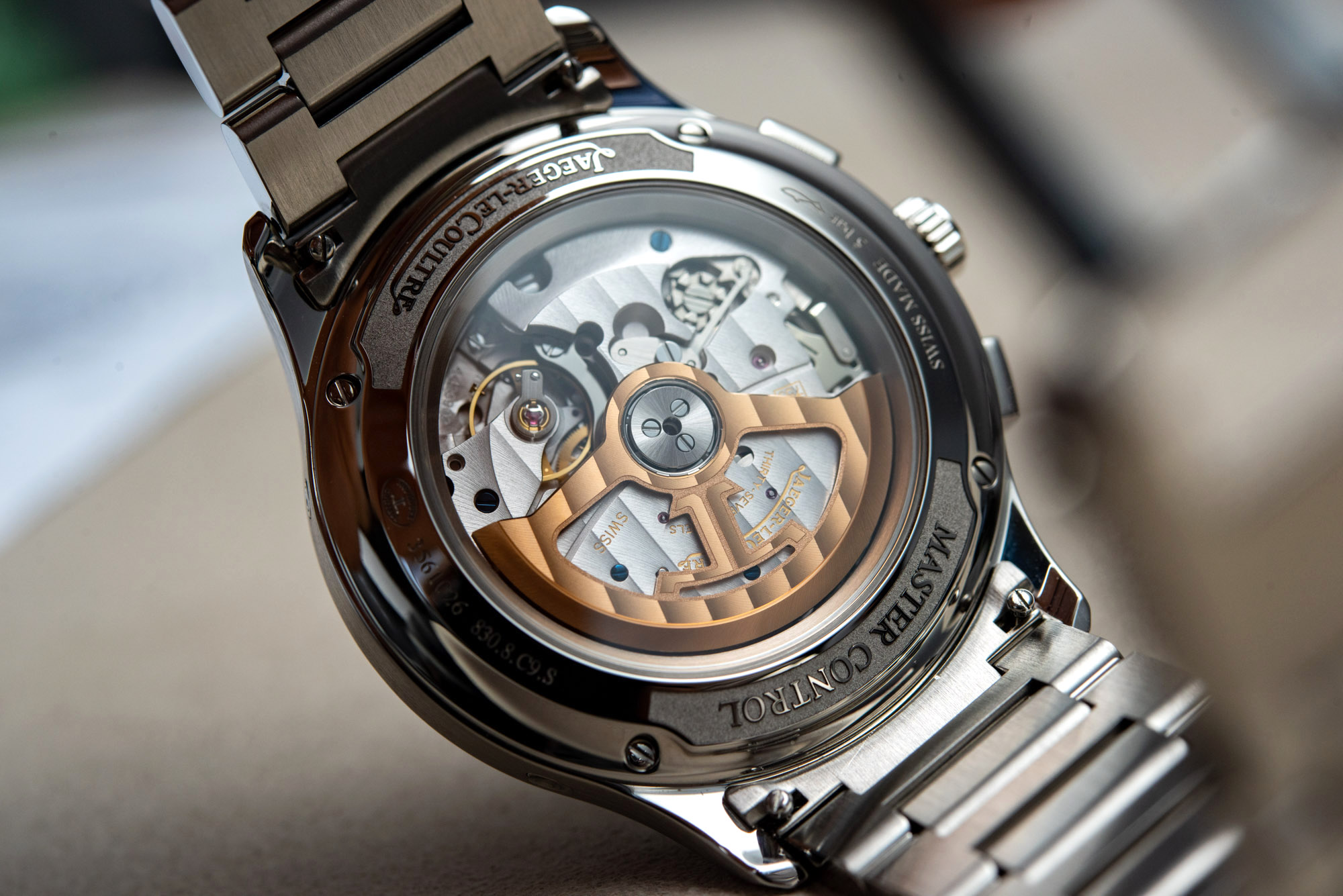 The case measures 40mm wide and just 12.05mm-thick — slender for a watch equipped with a self-winding system and a column wheel-actuated chronograph on the caseback side of the movement, and a full calendar module on the dial side of it, with date, day, month, moon phases, and two additional subdials (for running seconds and the 30-minute counter of the chronograph). Such a triple-layer movement — with the 4Hz, 65-hour power reserve base movement being sandwiched between the chronograph and the calendar — tends to be a lot thicker, resulting in a considerably chunkier watch. The 12mm thickness is a great match with the 40mm diameter, for the narrower a watch, the more the beauty of its proportions is compromised with every millimeter gained in thickness. The credit for a relatively slim exterior goes to the Jaeger-LeCoultre Calibre 759 — and let’s not forget, probably also to the compromised 5 bar (50m equivalent) water resistance rating that, ideally, should have been double that, likely omitted because the girthier gaskets would have resulted in a thicker case. 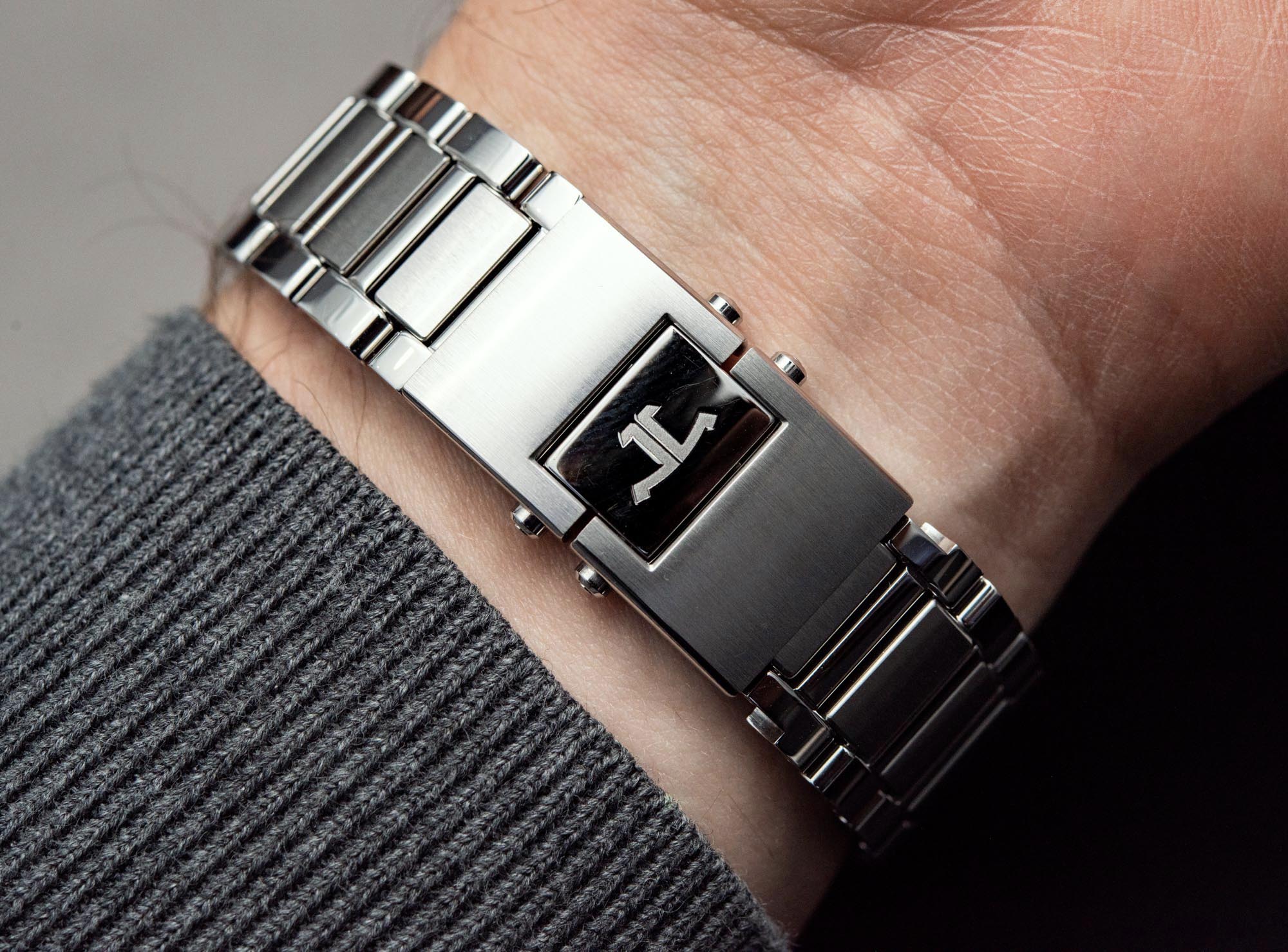 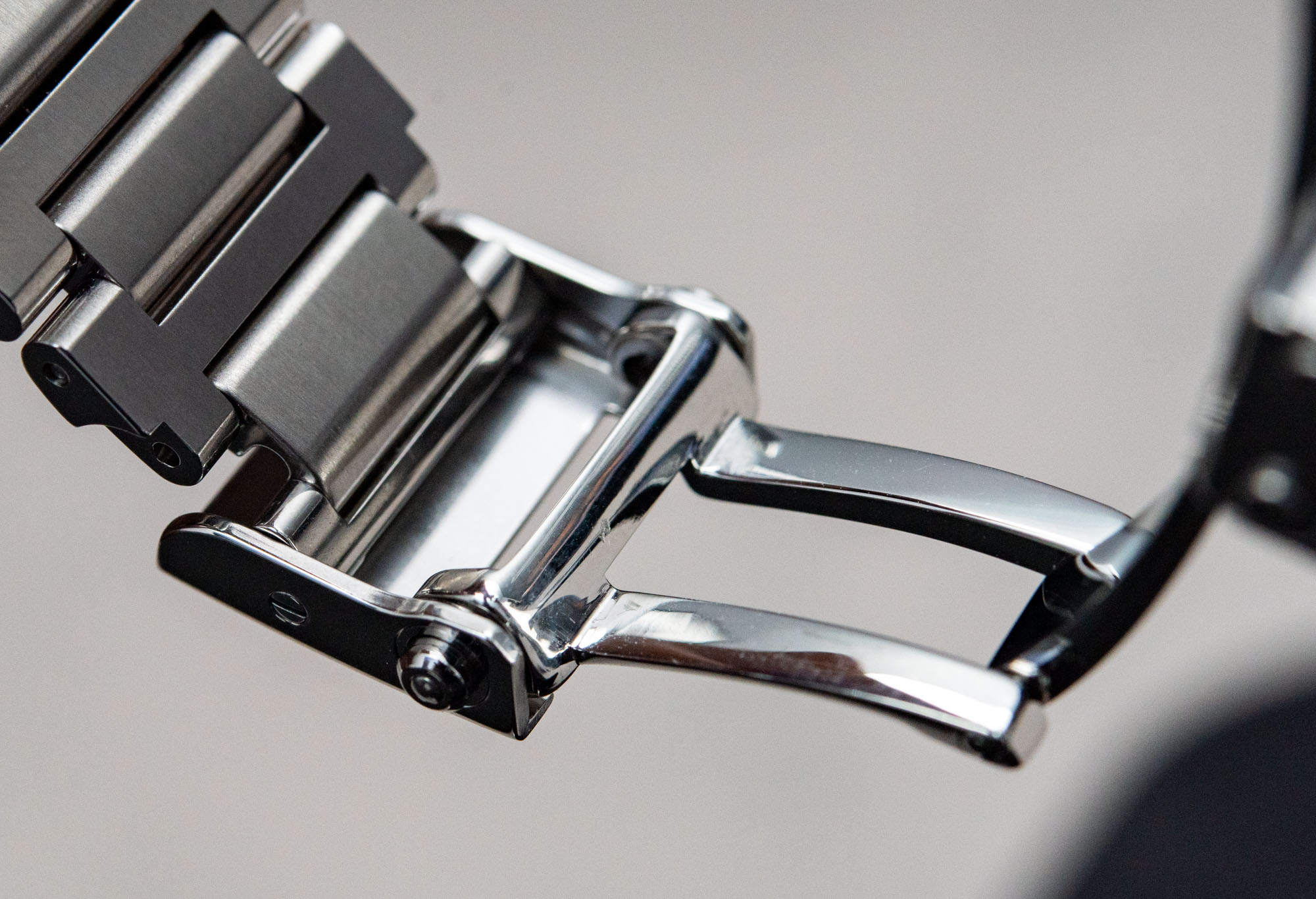 The bracelet features H-shaped, polished links with brushed center links. Integrated into the double-folding clasp is a handy quick-adjustment system, not unlike the Easylink system in select Rolex clasps, where the last link can be folded over itself to reduce the length of the bracelet. This piece has been present in both the clasp-ends in Jaeger-LeCoultre watches for at least a decade, probably more, and its only drawback is how the link, when opened, visibly narrows near the clasp, compromising the visual integrity of bracelet and clasp — you’ll spot this on the image above where the lower end of the bracelet meets the clasp. 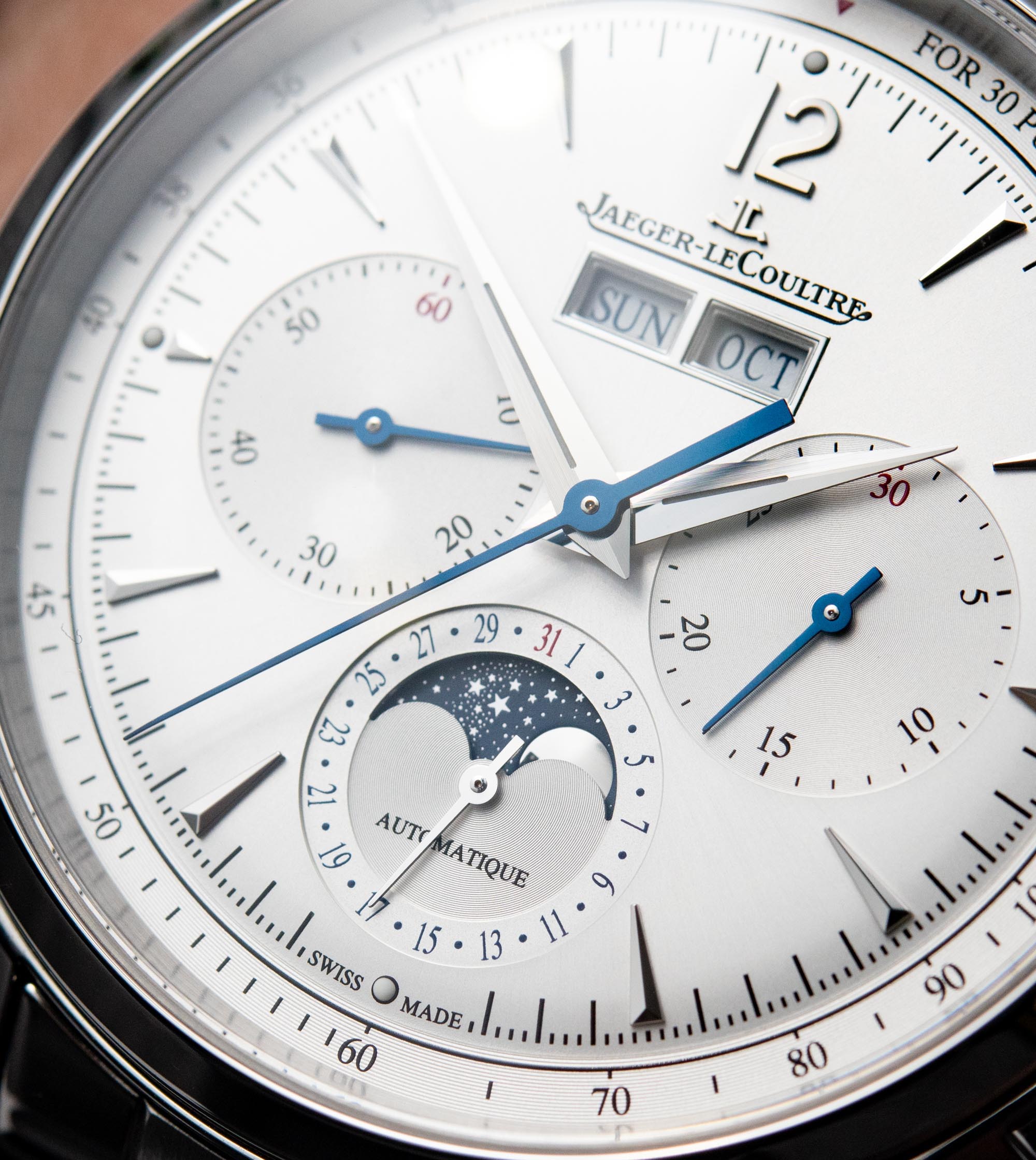 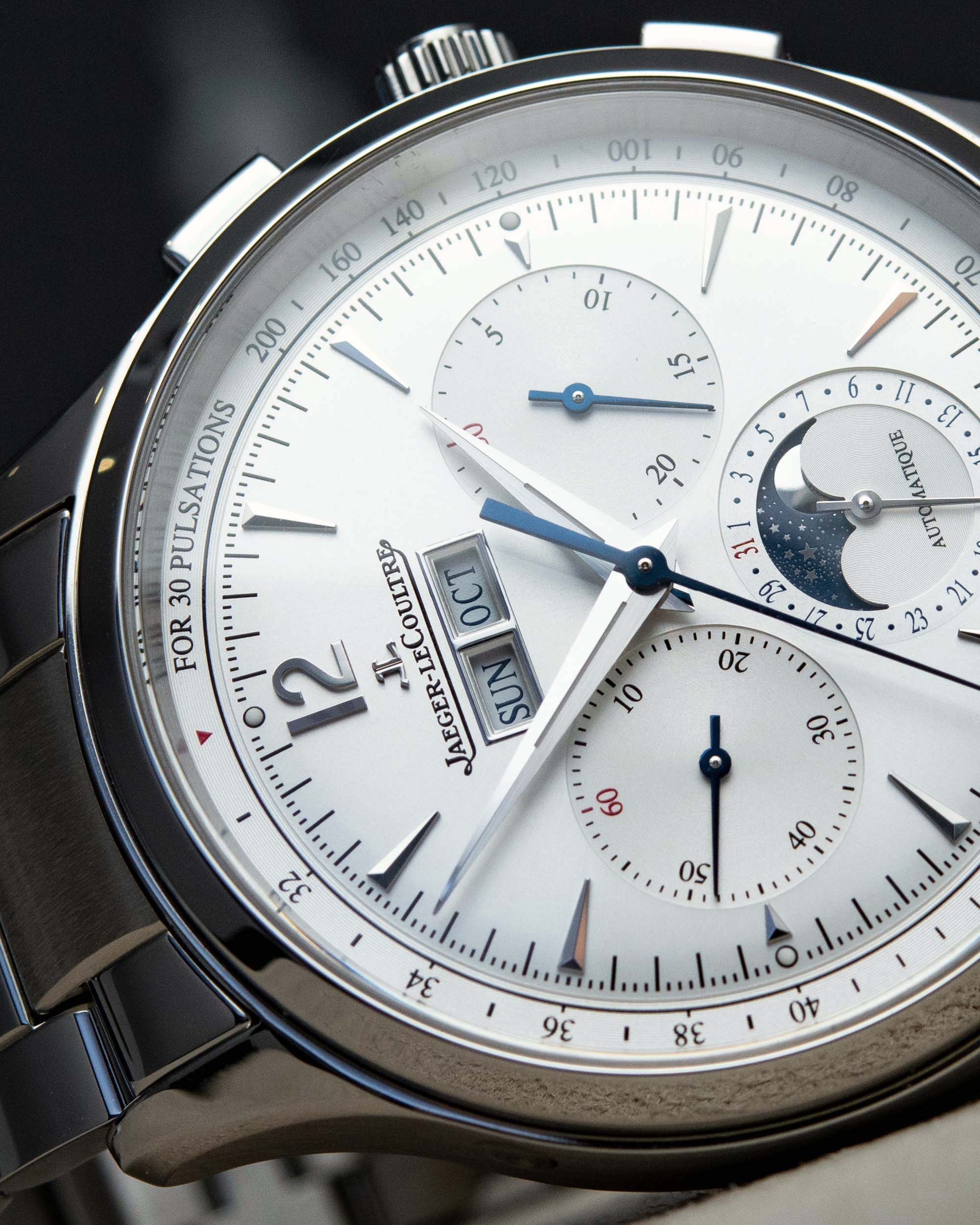 The dial operates with many — for the trained eye, perhaps too many — notches, serifs, and graduations to create that aforementioned first impression expected from a “proper” Swiss-made luxury watch. It is questionable whether all the information the Jaeger-LeCoultre Master Control Chronograph Calendar watch so readily offers is useful or, in fact, truly informative. The month would be handy to know in an annual calendar or perpetual calendar watch where the movement automatically jumps to the 1st day of the next month, adjusting for the length of the current month — and one wouldn’t want the watch to switch on from the 28th to the 31st in, say, September, because the month is incorrectly set. In this piece, however, it’s more of a superfluous display for the sake of visual balance and perceived complexity than something legitimately useful. The same could be said about the pulsation graduation and the phase of the moon. All this noted, the overall visual balance and radiant technicality of the piece are intended to make one forget the uselessness of most of its displays.

Strangely, it is that immediately impressive nature of the Master Control that might ultimately come to betray it. Sure, the Master Control has a lot going for it to make it the only luxury watch one buys for oneself, keeps and wears for decades, then passes it down. For many others, however, the Master Control might become tried, proven, understood, and indeed fatigued relatively soon. To be fair, the combination of a “doctor’s chronograph” (the pulsation-graduated scale around the dial), the moonphase display, and a full calendar with day of the week and month apertures, sounds and looks cool and complex. That said, the resulting overall aesthetic is dated, at least in places, and is almost too perfectly judged, too carefully presented over a rather uncharacteristic silver dial. 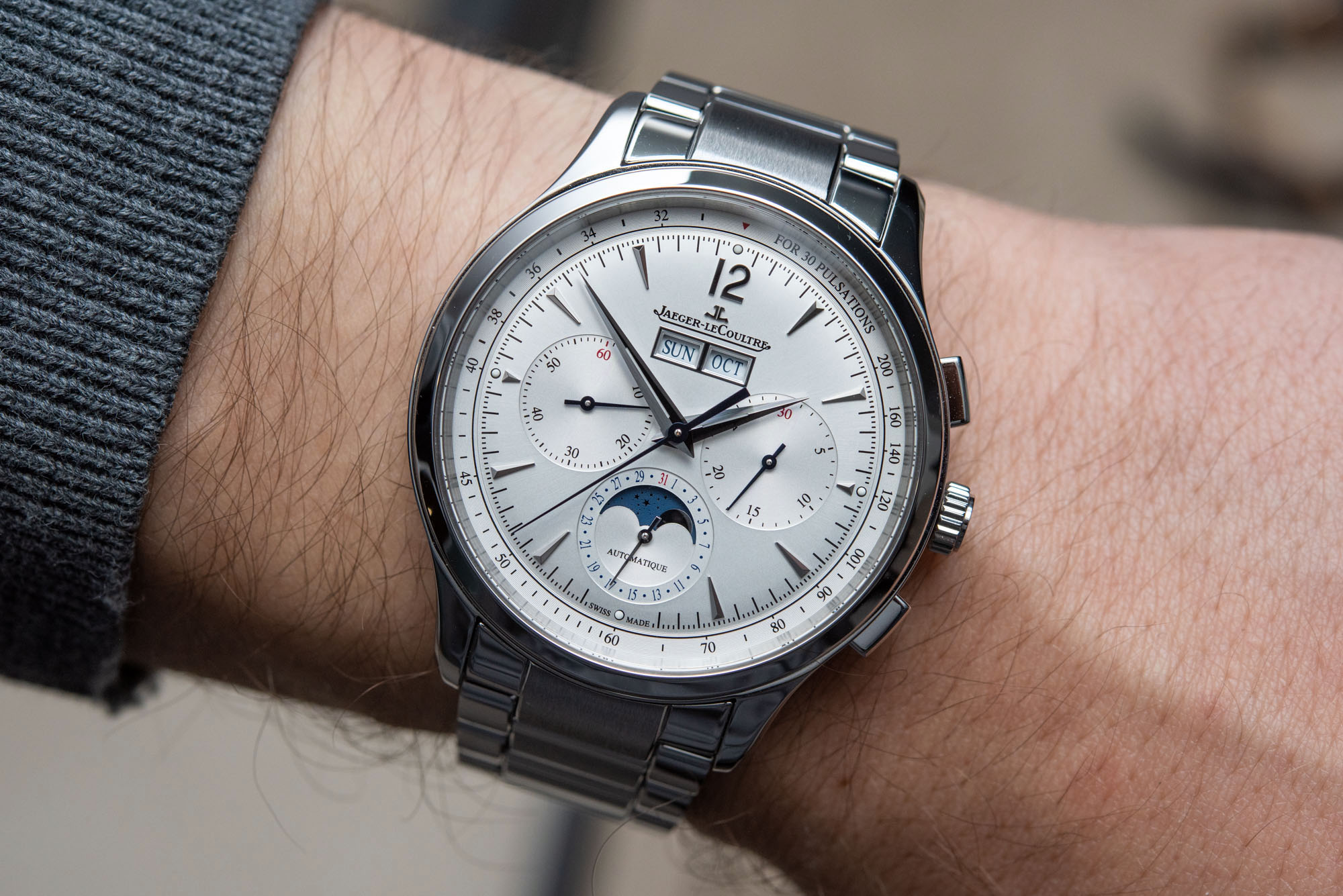 Free from an “anniversary” designation and all the fanfare that comes with it, the Jaeger-LeCoultre Master Control Chronograph Calendar watch quietly reinforces all that is great and all that is perhaps a bit too safe and stale about the Master Control collection. A few bravely colorful dial options, a departure from the wilfully 1990s typography that is dated and hard to read at the same time, would go a long way in refreshing the Master Control line. Until then, it remains an impressive piece at first glance that is potentially outshone by some of the more entertaining, vibrant, and powerful luxury chronograph watches we have been seeing from the likes of Zenith, Breitling, and even Montblanc, Glashütte Original, and Cartier, at the same or considerably lower prices.

The Jaeger-LeCoultre Master Control Chronograph Calendar watch (reference Q413812J) is priced at $17,800, which, again, is rather high given the comparable exterior quality and technical refinement offered by the aforementioned competition. Visit the brand’s website to learn more.