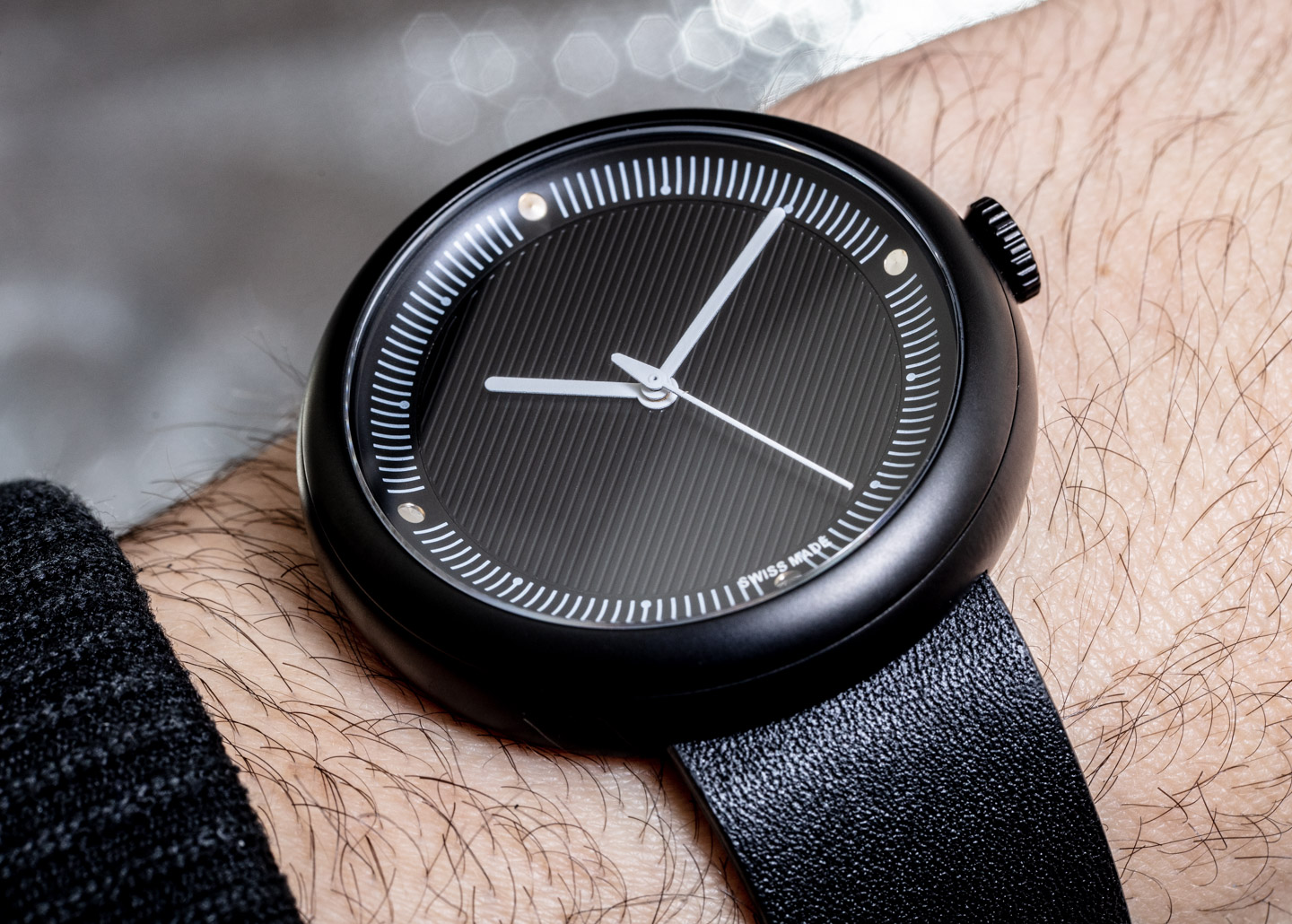 Objest watches began as the Objest design studio by Jared Mankelow in England. The idea was that Objest would be an all-purpose industrial design firm, given that Mr. Mankelow has worked with a number of major consumer electronics firms around the world. Objest watches would be a product division, whereby the firm would produce watches. Why watches?

That is a very good question. I’ve found over the years that watches — as an industrial design product category — have the ability to attract the attention of a broad spectrum of design professionals. It isn’t that many of these people set out to make waves in the wristwatch industry, but rather that watches themselves as design projects are apparently like catnip for engineering-savvy creative souls. Jared of Objest describes some of this emotion by suggesting that watches are particularly difficult to get right and that’s their inherent challenge — as well as the extremely broad “angles” of approach that people can take when designing a watch in the first place. 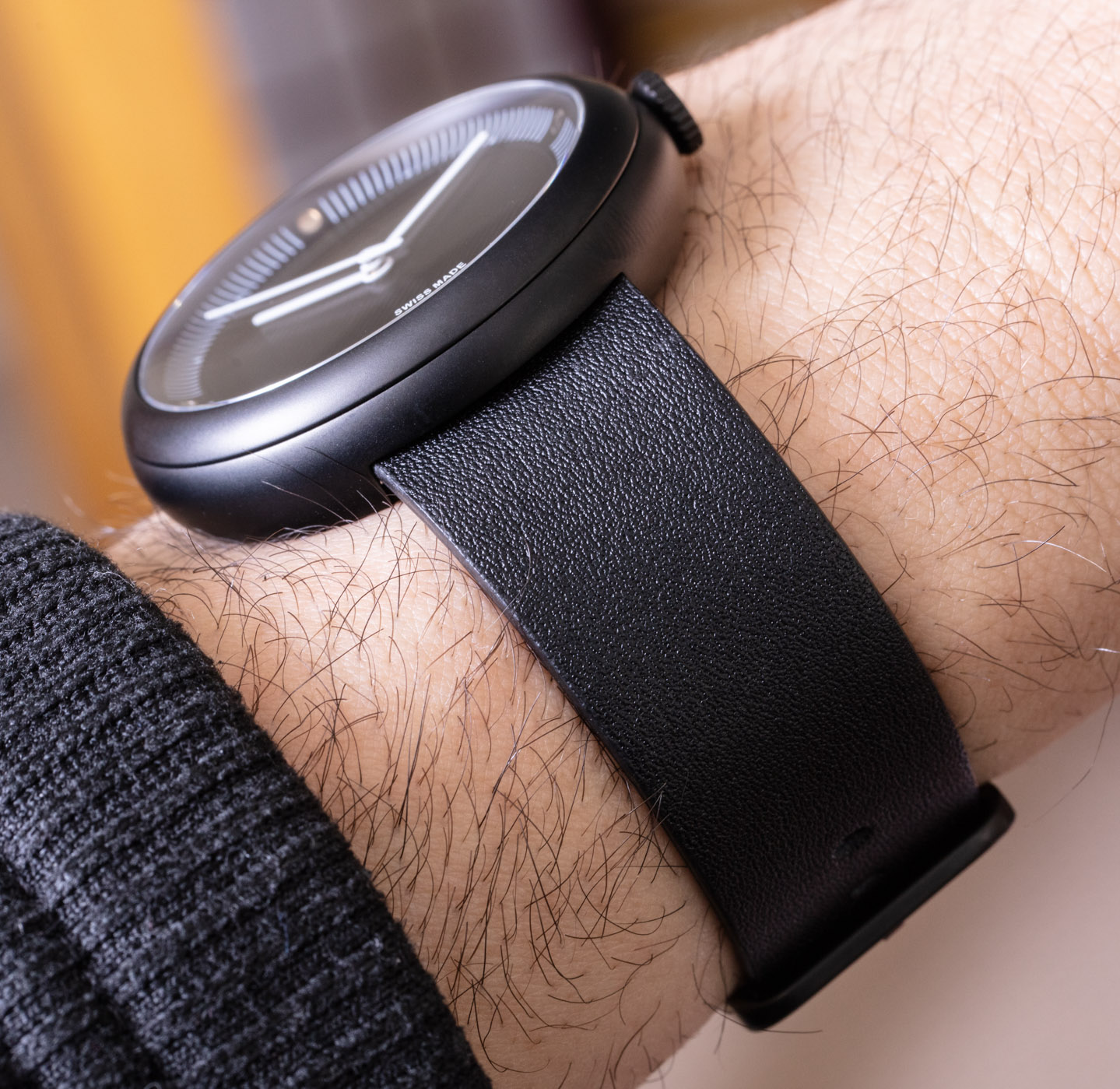 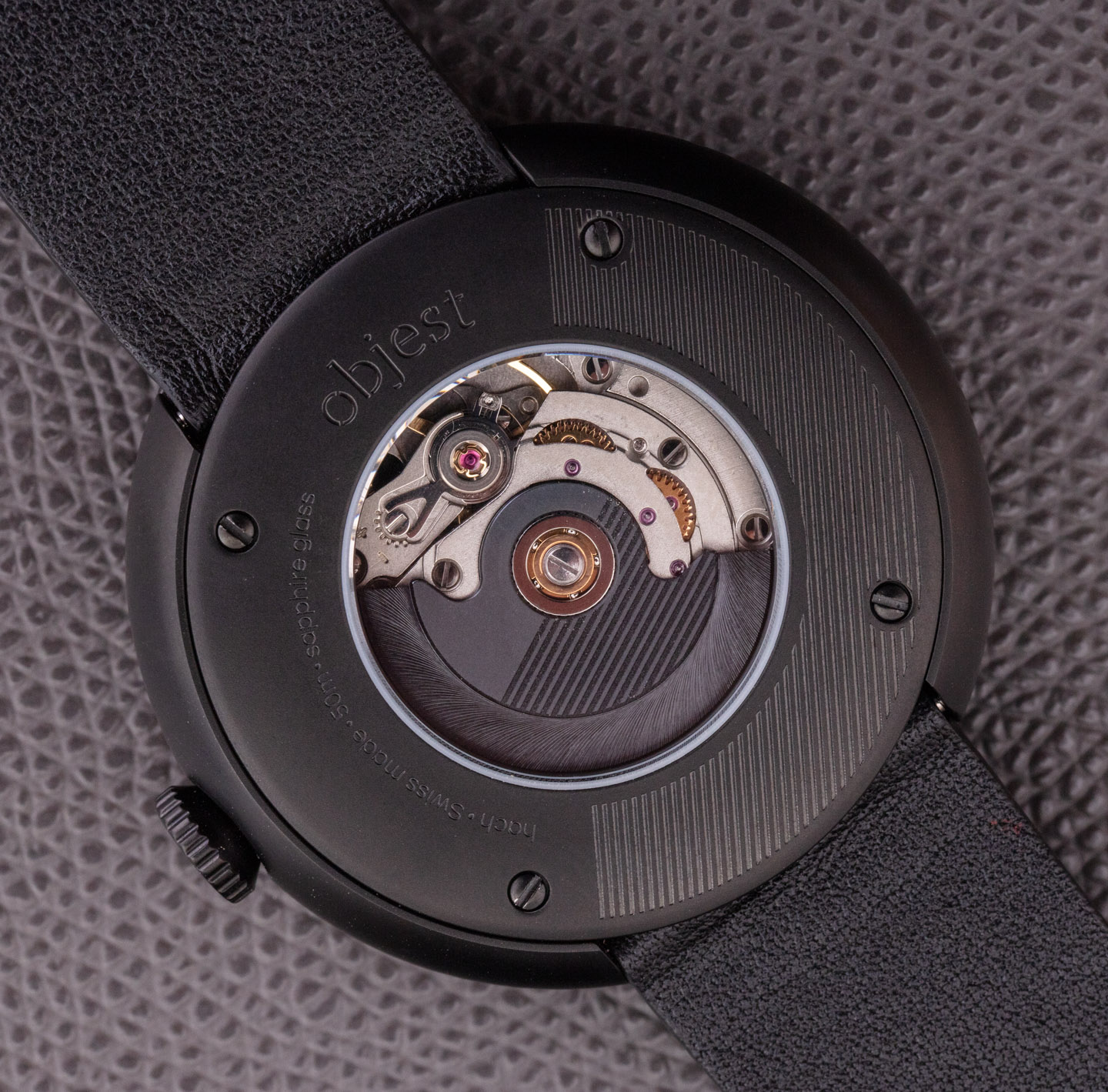 Given Mr. Mankelow’s main focus on technology products, it makes sense that he has a minimalist approach to timepiece design, as well as one that celebrates the playfulness of a wristwatch more so than its utilitarian appeal. Like most designers, he also appreciates the efficiency that comes with modular design. The various Swiss Automatic model watches all share the same case, but vary things up with the dial styles and case color. For Jared, watches present him with the comfort of low-tech engineering (compared to electronics, that is), as well as the focus on precision tolerances, bold displays, and creative designs intended to put a smile on the wearer’s face.

Objest watches follow a tradition of neo-Bauhaus design that takes the appeal of mass-produced simplicity with friendly-looking interfaces. Objest isn’t purely minimalist (a good thing) in that the dials themselves are palettes for artistic, graphic design-style watch face compositions. With varying levels of traditional legibility… Such watches are very cosmopolitan, ideal for working creative professionals and others whose professions involve a combination of excelling at both form and function. 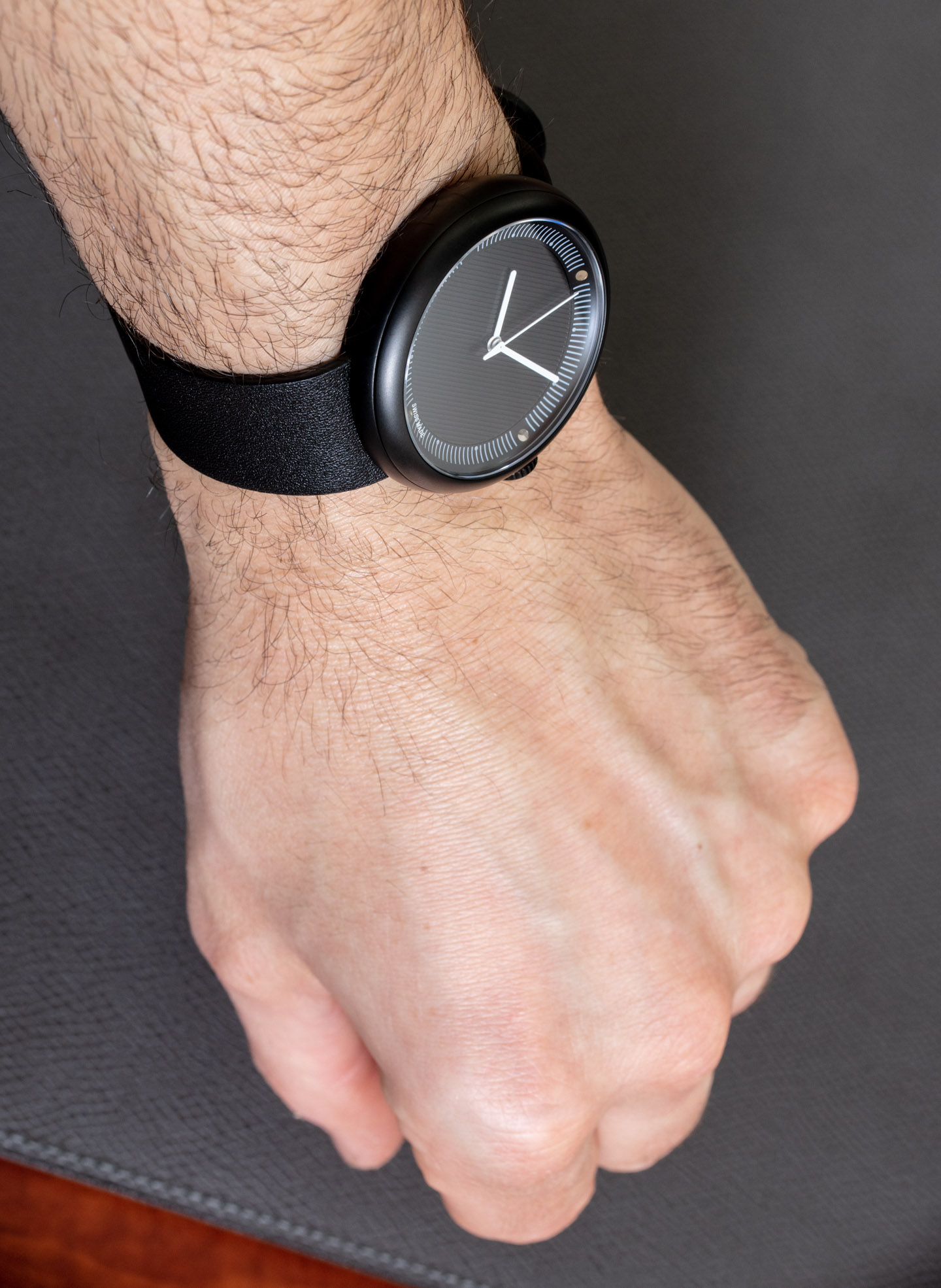 The round cases are steel (though offered in a few finishings — with black DLC-coated steel as pictures) and 42m-wide. They wear on the smaller side given the lack of lugs and the overall soft proportions. In addition to the 42mm-wide (11mm-thick) Swiss Automatic men’s size, Objest also produces a 40mm-wide size for the watches in a quartz movement-equipped variant.

The case is well put-together and matte-finished with modern looks in mind. Over the dial is a domed sapphire crystal, and the case is water-resistant to 50 meters. I would have added AR-coating to give the dial a more instrument-like viewing experience. On the wrist, the case wears comfortably, though this case design is not entirely original — even though it has tweaks to give it an Objest brand personality. Little touches, such as the original style of the crown and the caseback etching design, further offer a sense of brand DNA. 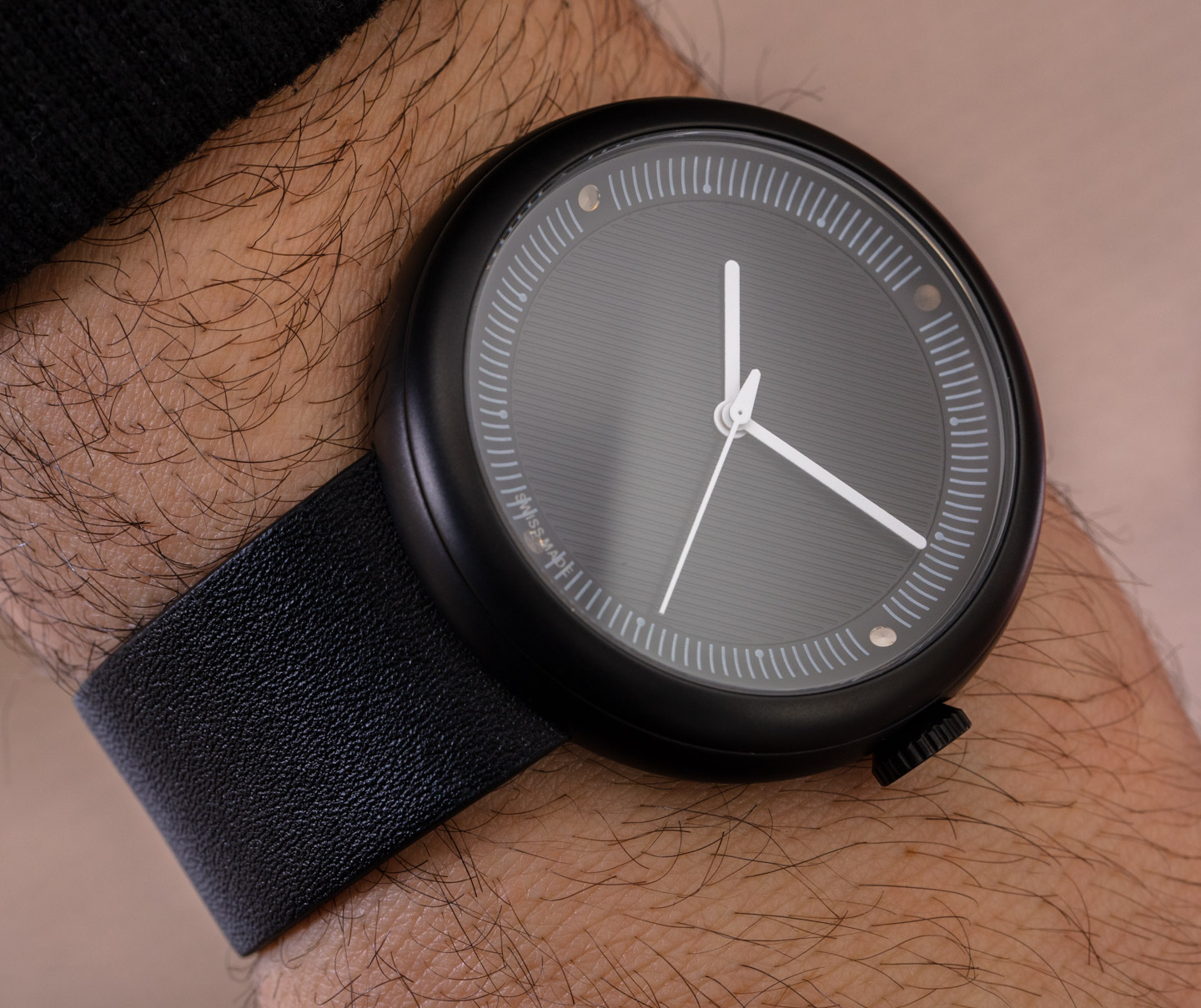 Through the rear of the watch, you can view the automatic mechanical movement in the 42mm-wide Swiss Automatic watch. This is where the “Swiss Automatic” part comes in. Inside the watch is a Swiss Made ETA 2824-2 automatic movement, which has a custom automatic rotor for Objest. The movement operates at 4Hz with about 38 hours of power reserve.

The pictured Swiss Automatic Black watch is one of Objest’s latest designs. It features an interesting concave dial with high-contrast rounded white hands and four prominent hour markers that are both inset and polished (for an interesting effect). This is also apparently the first Objest watch with a non-animal leather strap for people who pursue a vegan lifestyle, though the 20mm-wide strap does roughly have the texture of thin black leather. The watch is available either with the pictured black dial or as a white-dial variant that has black hands. 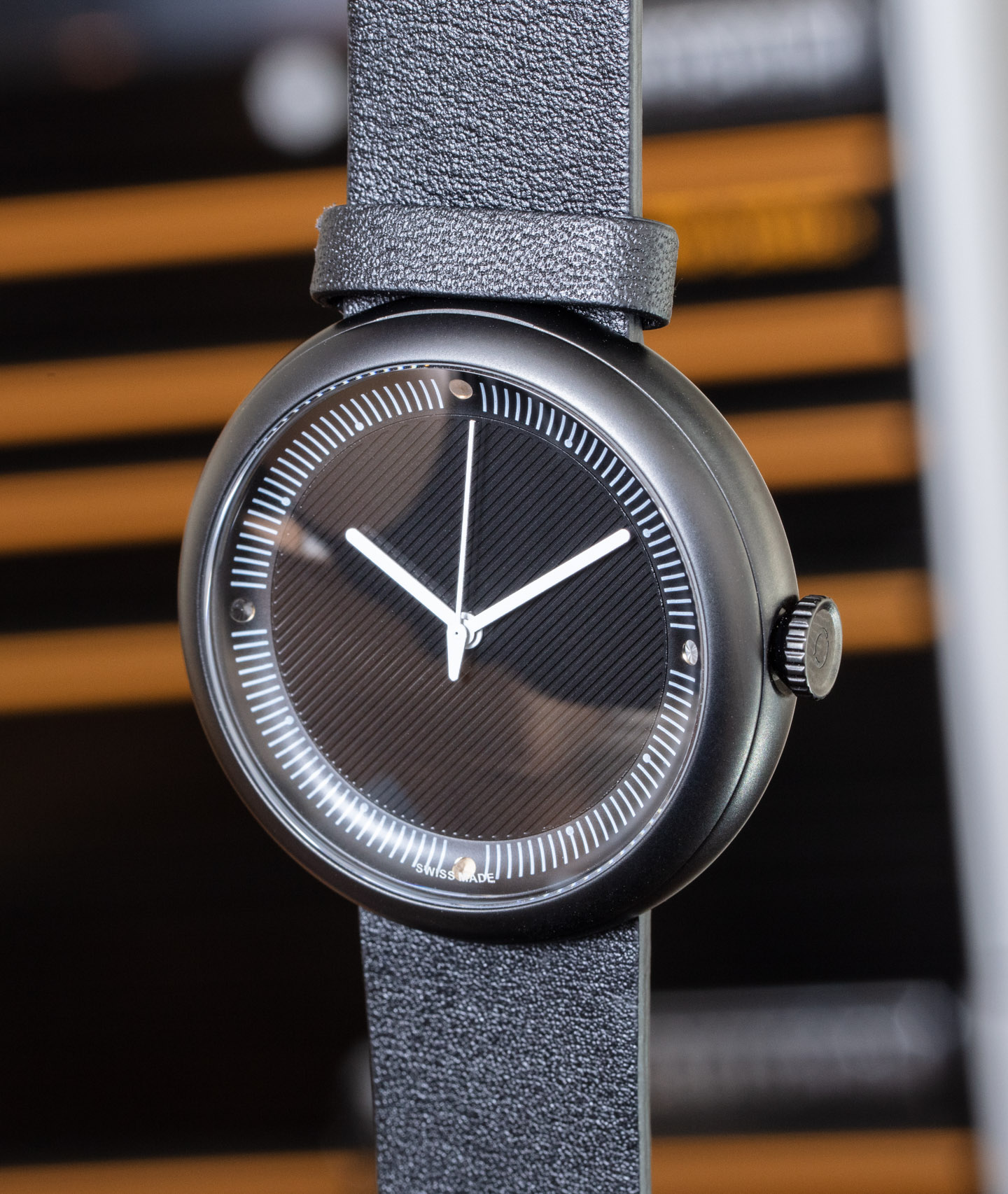 What this new Objest Swiss Automatic watch is still missing is a proper name to go with its distinctive design. The brand’s other dials have names such as “Simple,” and “Hach” – even though they also contain Swiss automatic movements. So let’s all please give Mr. Mankelow some encouragement to now give his creations proper titles that attempt to be as original as the rest of his work. Price for the Objest Swiss Automatic watches is £595. Learn more at the Objest website here.