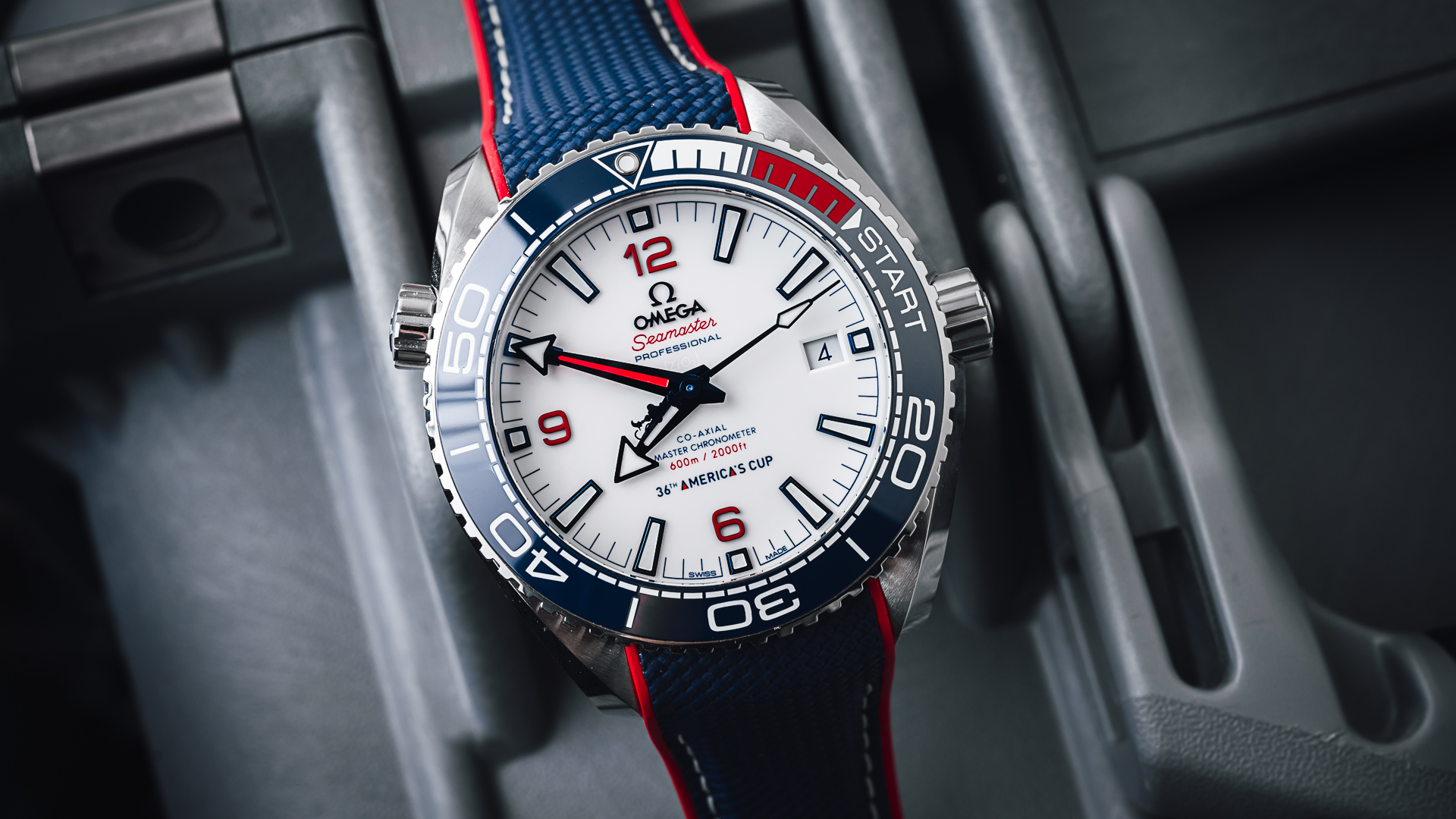 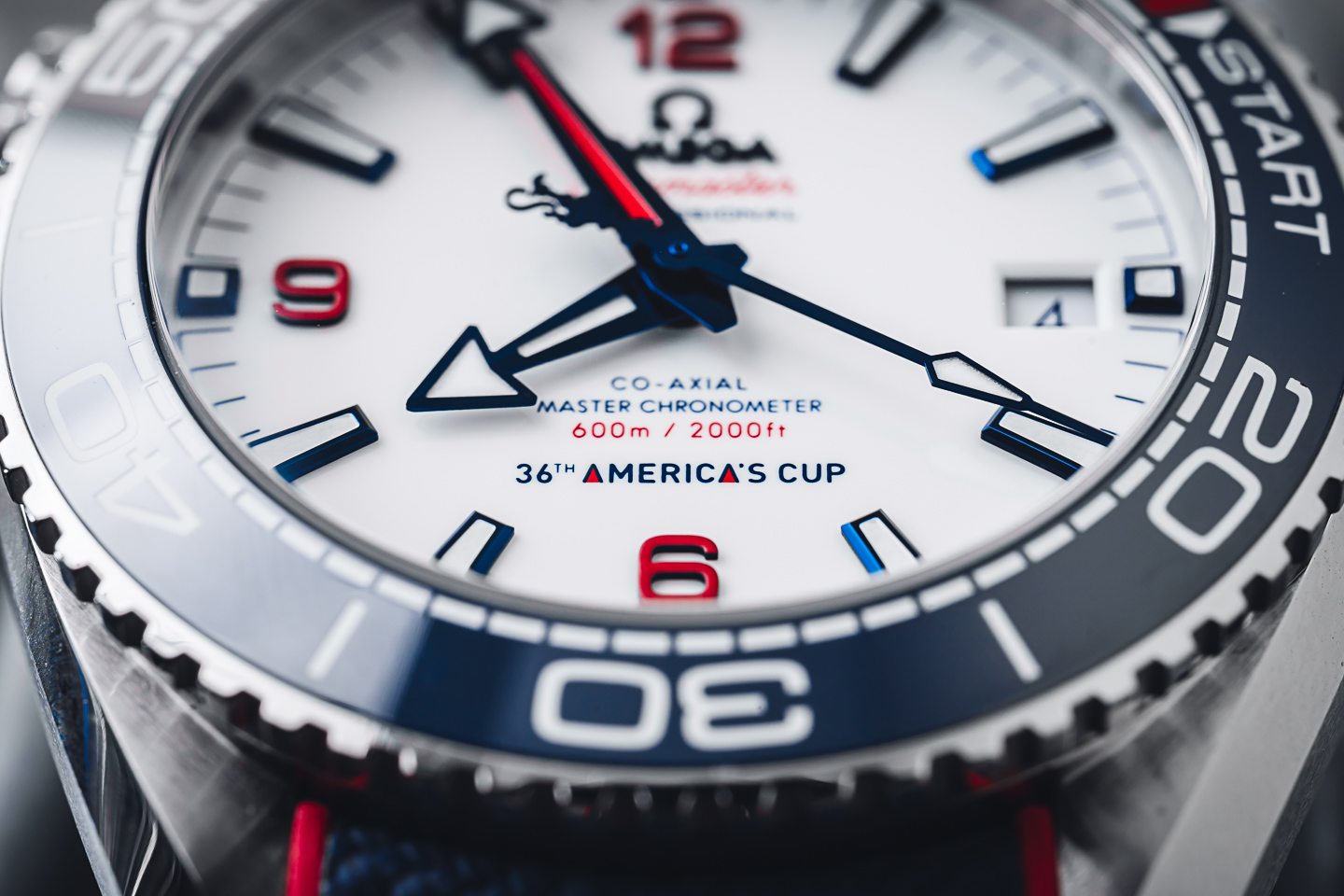 The modern diver – like the modern sailer, might not still formally rely on a traditional analog instrument strapped to their wrist, but as any habitual tool watch wearer will tell you, that’s hardly the point. And for such an enthusiast, even a truncated regatta race calendar this year hasn’t stopped Omega from launching a new limited edition Seamaster Planet Ocean built to commemorate the 36th America’s Cup. Now, we’ve seen Omega give this gorgeous white lacquer dial and blued marker treatment to other watches, most notably on the Aqua Terra Goodplanet editions from years’ past, but in this particular instance, that color scheme (with the addition of plenty of red) suits not only the America’s Cup, but the Emirates Team New Zealand livery – an outfit Omega has supported with numerous special edition Seamaster and Speedmaster watches since 1995. Before before we get too deep into this particular reference’s detail-rich design though, get yourself caught up on the Planet Ocean with Bilal’s comprehensive overview of every reference comprising ’the story so far’ of Omega’s signature luxury diver. 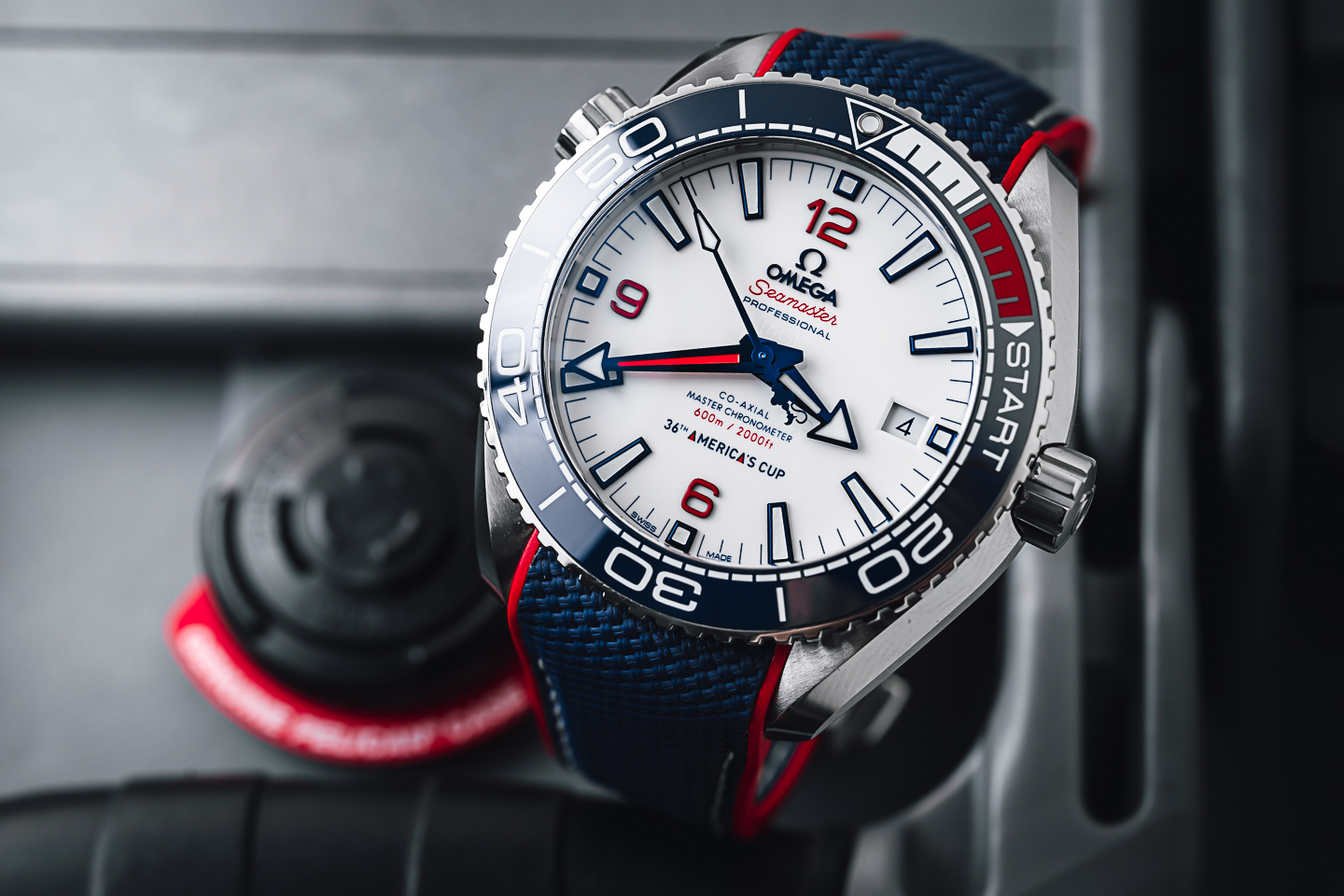 This new reference is a double tribute of sorts – with Omega continuing to pledge its support for the ETNZ racing team, as well as commemorating the fact that Omega is now the official timekeeper of the America’s Cup, which is why we see more of a team-agnostic approach here (unlike past ETNZ Seamasters, which featured the team’s logo and wordmark displayed throughout), and the more obvious denoting of the 36th America’s Cup directly on the dial at 6:00. I personally could do without this extra text on the dial, but for sailing fans, or crewmen themselves, this could be a crucial detail not worthy of being overlooked. Besides, there are plenty of other very cool embellishments in this watch’s detail-rich design to more than make up for it. 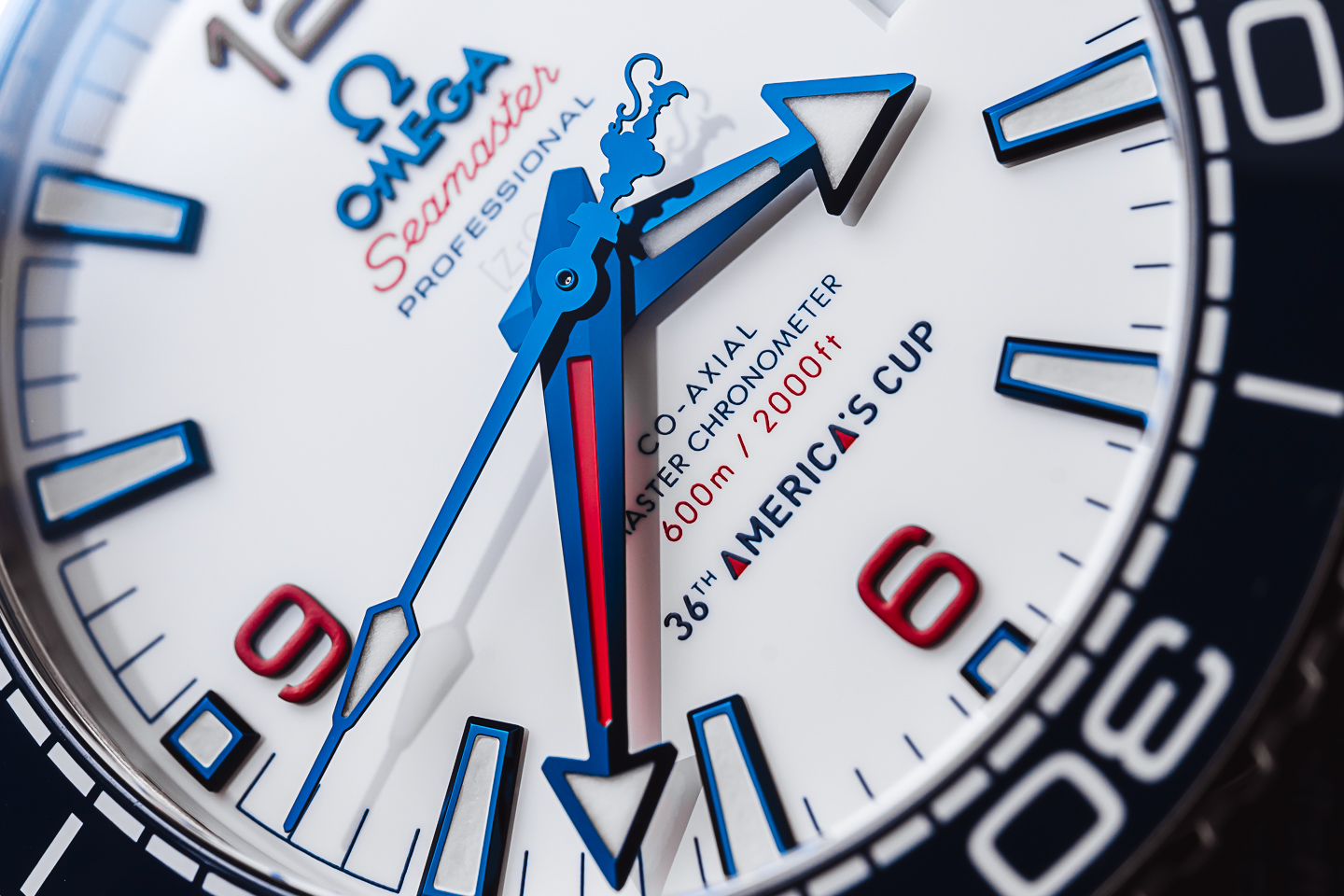 Historically speaking, when it comes to Omega’s tribute watches, whether it’s for Bond or for the Olympics, the brand loves incorporating tiny details which, as divisive as they may be when it comes to the die-hard watch collectors (y’know, the same guy who will gladly decry anything above 40mm with a date), are absolutely one of Omega’s strong suits – particularly as it gives the brand a chance to flex its technical savvy to execute an otherwise minute detail for the tribute, without overpowering the watch itself. In this instance, it’s the multi-colored ceramic bezel graduated for regatta timing, and the Auld Mug running seconds hand, the latter of which has been laser-cut to a level of precision that takes a loupe to fully appreciate.

Speaking of which, the Auld Mug (another name for the physical America’s Cup) is amongst the more impressive trophies in modern sport, sharing rank and stature with the Stanley Cup, American football’s Vince Lombardi Trophy, the PGA Tour’s Wanamaker Trophy, or the British Open’s own Claret Jug. Standing nearly four feet tall and weighing over 30 pounds, the Auld Mug’s impressive stature has been scaled back a great deal for this Seamaster, appearing both on the dial and the exhibition caseback where it’s been printed over the sapphire crystal (effectively hiding the Master Chronometer-certified cal. 8900 Co-Axial movement beneath), along with the date and location of the 36th America’s Cup. 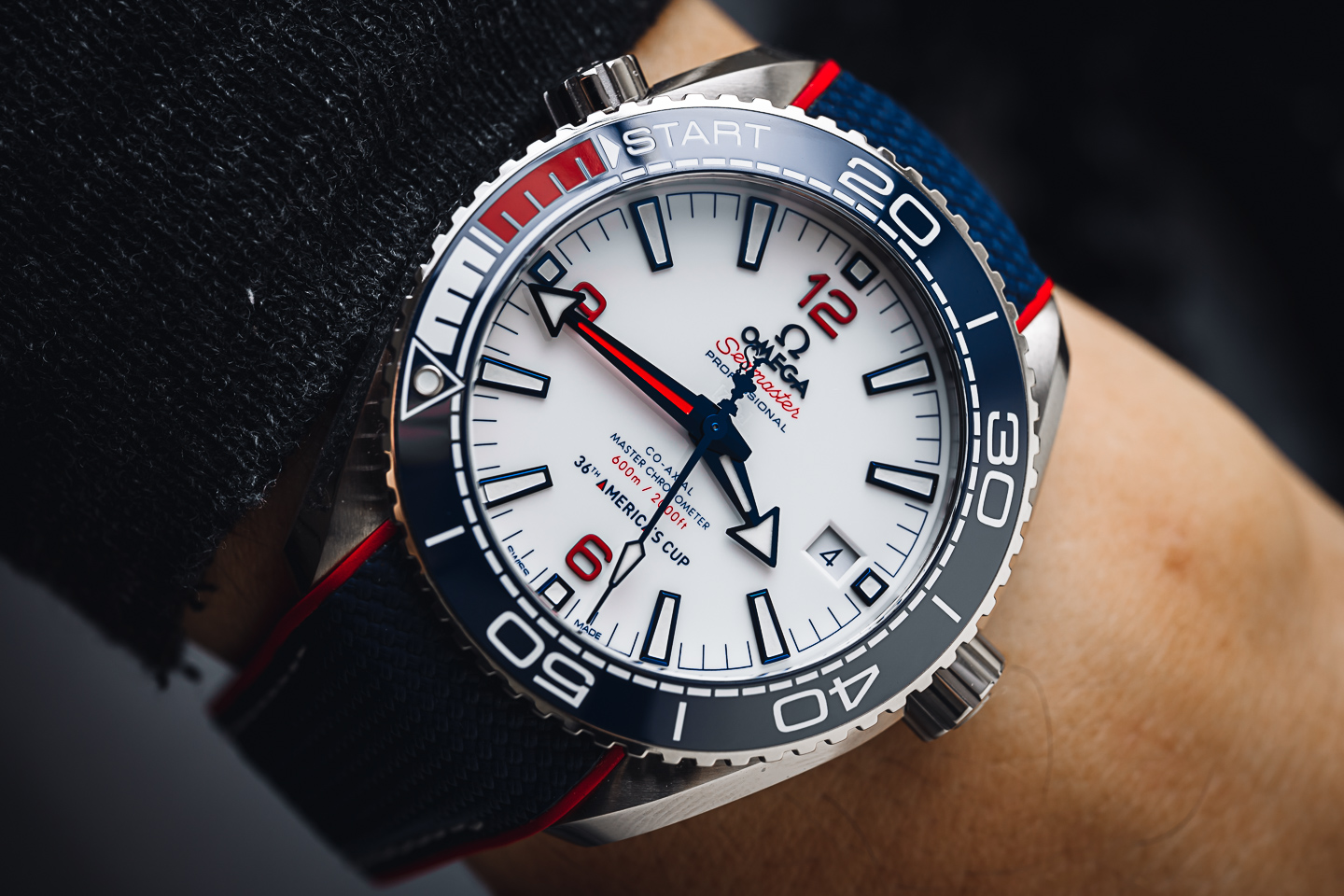 Other neat details persist, like the tricolor bezel insert, which starts with a navy blue scratch-resistant ceramic disc as its base, then fills its graduations with white enamel paint (like the standard Seamaster 300) for the individual minute markings and minute scale, and red enamel to indicate the crucial five minute regatta starting window. This is a bit different than some variants of the current generation Planet Ocean which use vulcanized rubber for the colorful portions of the bezel. As presented here, the bright white lacquer used in the bezel neatly complements the lacquer dial’s striking, ultra high-contrast aesthetic. It’s here, where there are visual illusions aplenty: soft blue or red reflections at the edges of the beveled hour markers, three-dimensional wordmarks that appear to hover in place, and even a perfectly cast shadow or two, circumnavigating the milky white pool of the dial itself. I’d go so far as to say that like the GoodPlanet editions I’ve always loved, this remains my favorite Omega sports watch color scheme to date – it’s just that good. 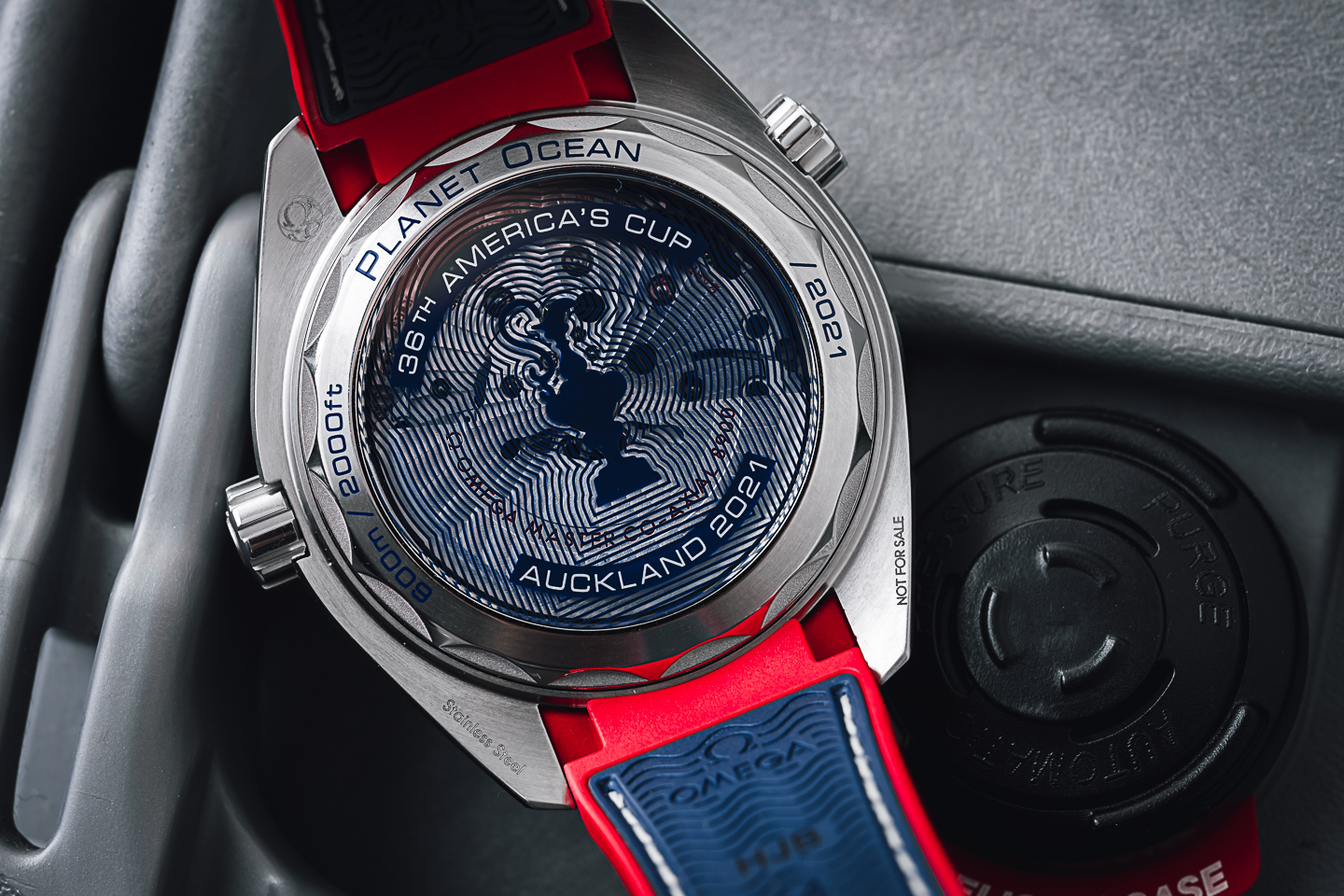 Much has already been said about the size of the modern Planet Ocean, but it’s worth repeating: the Planet Ocean is everything that I love about a modern dive watch: it presents itself as an unapologetically bold sports watch, yet it wears remarkably comfortably, with compact lug to lug measurements and a sloped mid-case design that hides its considerable thickness far better than it deserves. But credit should also be given to Omega’s excellent antimicrobial rubber-backed textile strap, which remain soft and pliable, while supporting the otherwise heavy watch head with surprising ease. From the perspectives of color, capability, and details on offer, there’s an awful lot going on with this particular limited edition – it’s classic Omega, and everything that the Sea-Dweller (it’s most logical competition) is not, and for dive watch fans looking for something a little left of center, that’s absolutely a good thing.

Only 2,021 pieces of the Omega Seamaster Planet Ocean 36th America’s Cup are being made, each with a price of $7,050. Learn more about this reference, or order your own at omegawatches.com