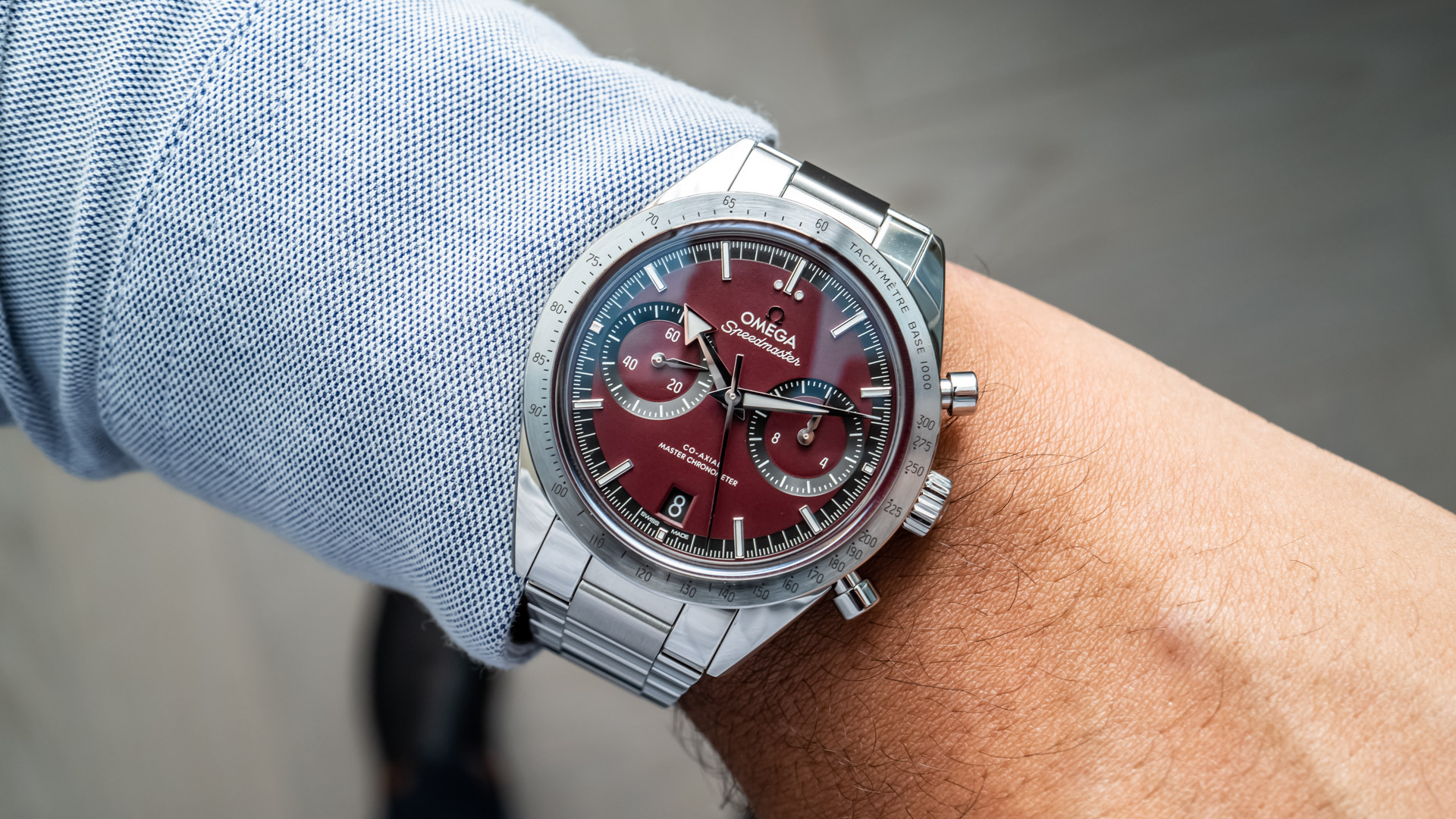 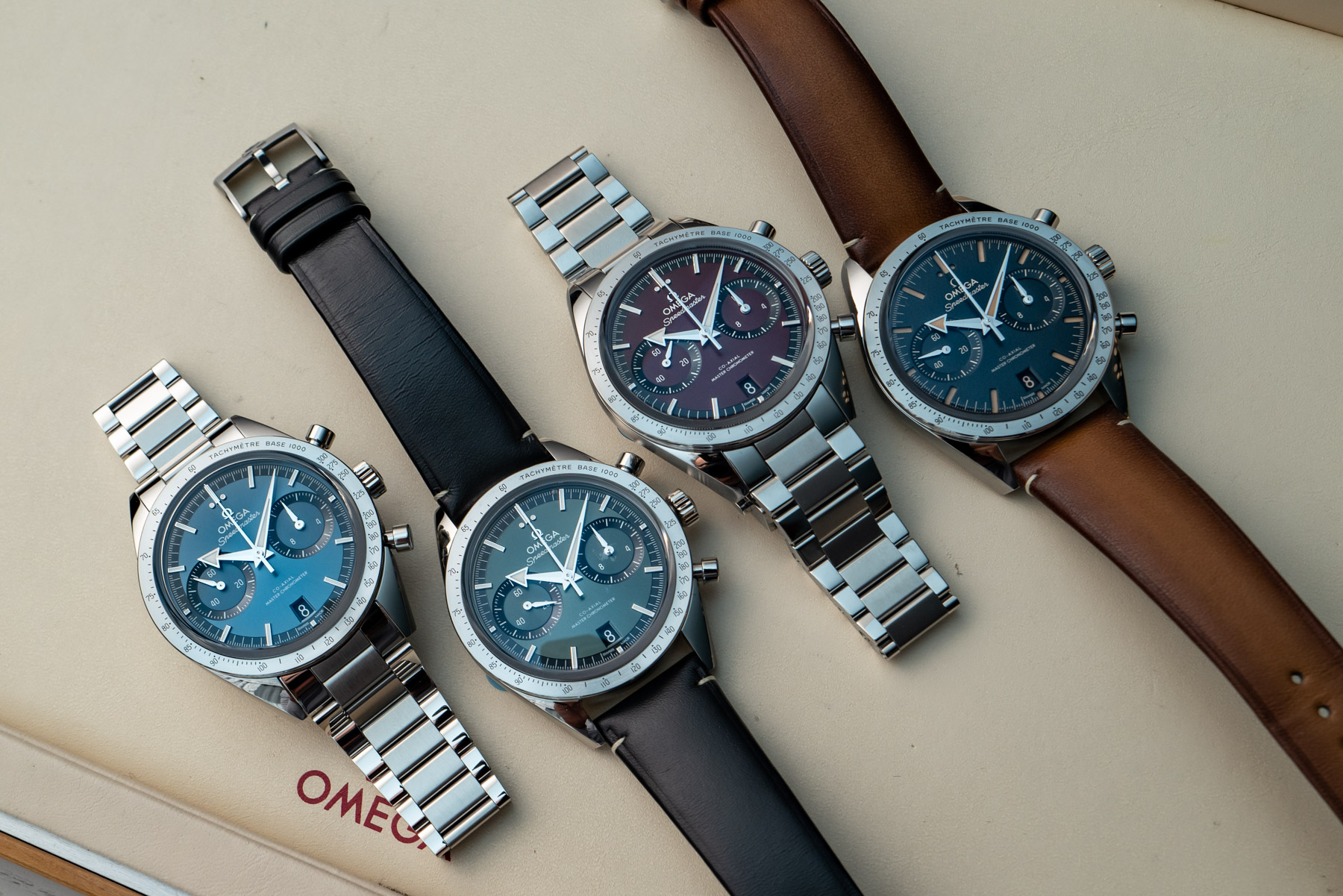 For 2022, Omega has revamped the Speedmaster ’57 updated with a new manual-wind METAS-certified movement and a slimmer case. There’s no shortage of style and color options, either, with four variants — two on a new stainless steel bracelet and two with colored dials paired with matching leather straps. The Speedmaster ’57 has been the more vintage-inspired cousin of the Moonwatch, and I distinctly recall how effective that Clooney ad was when it was first released back in 2013. 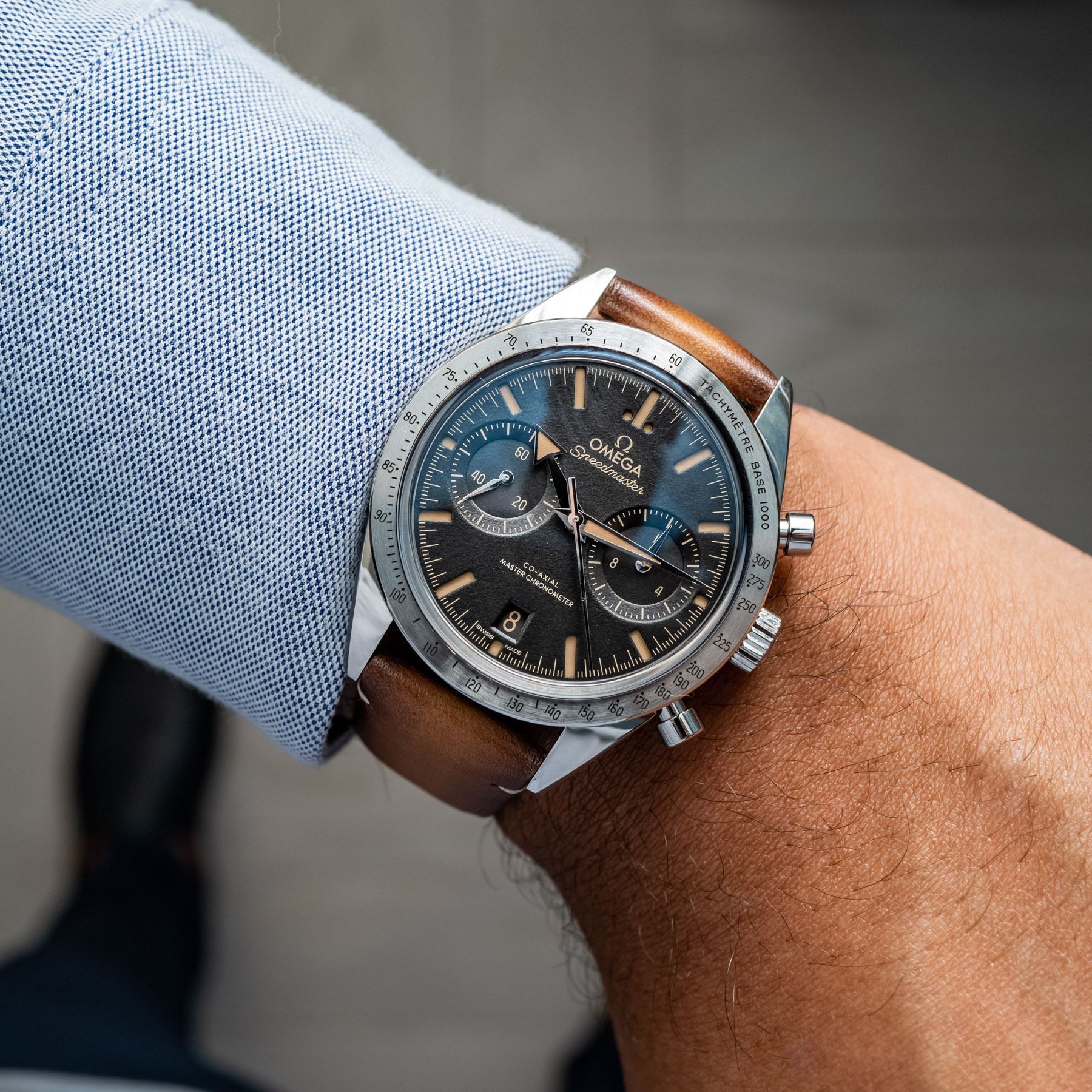 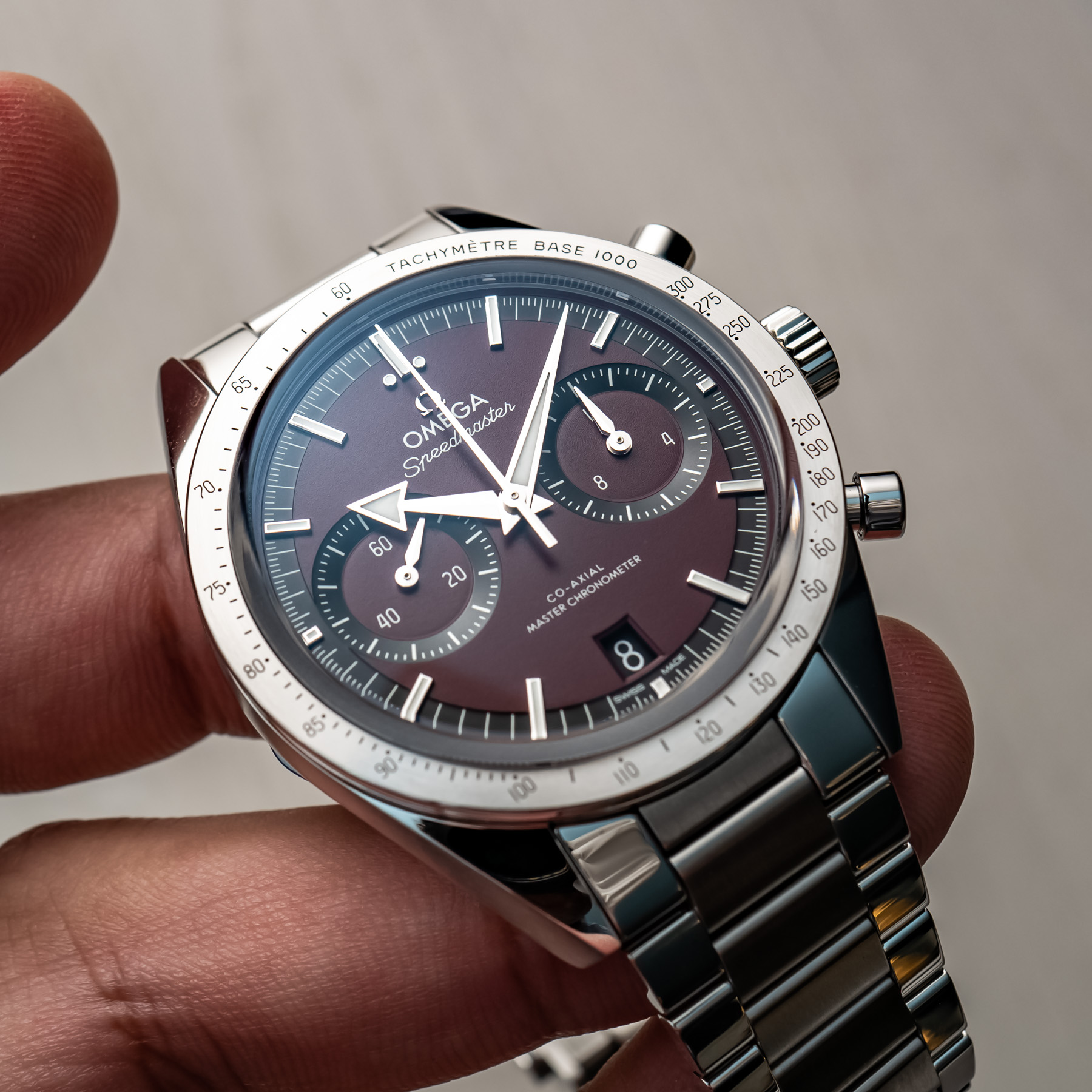 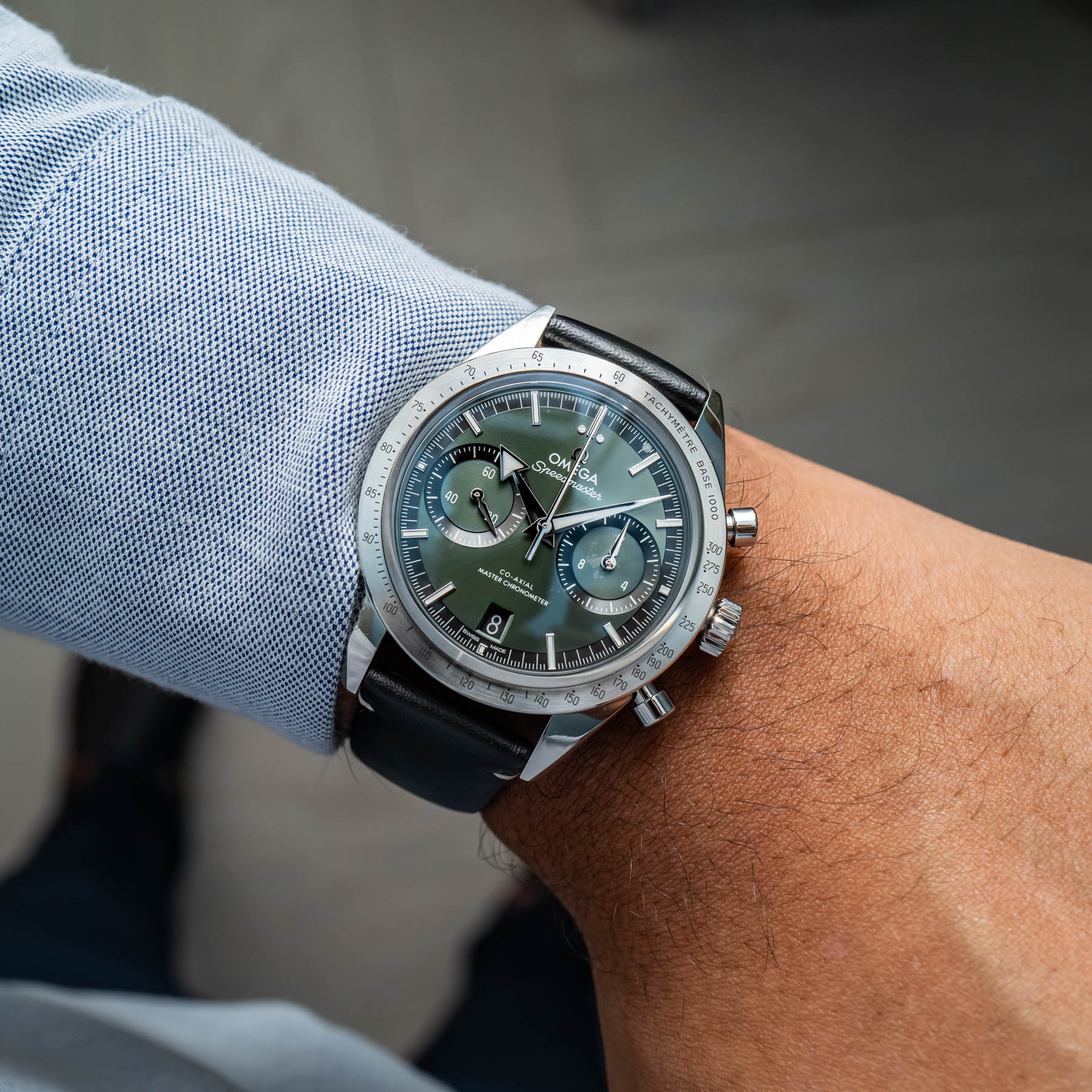 What’s immediately striking about the new Speedmaster ’57 is just how excellent the proportions are at 40.5mm-wide and 12.99mm-thick, with a lug-to-lug measurement of 49.6mm (with 50m water resistance). When you compare this sizing to the 41.5mm-wide and 16.17mm-thick case of the outgoing model, it’s clear that we are talking about more than a simple redesign but rather the realization of how this watch should have always been. Much of the slimness is due to the new METAS-certified Co-Axial Master Chronometer Calibre 9906, which, like the 9908 we saw on last year’s Speedmaster Chronoscope, is a manual-wind version of the automatic 9900. 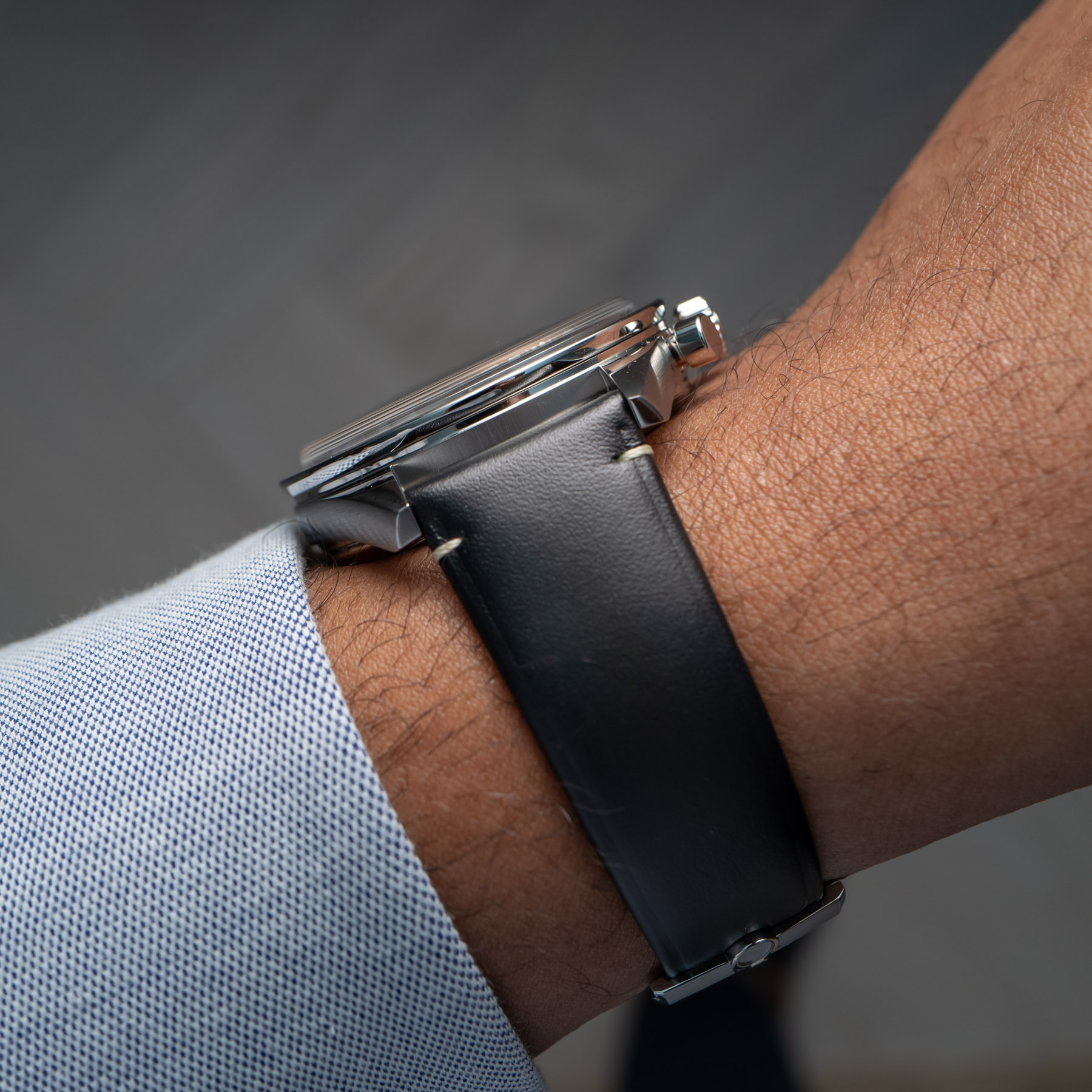 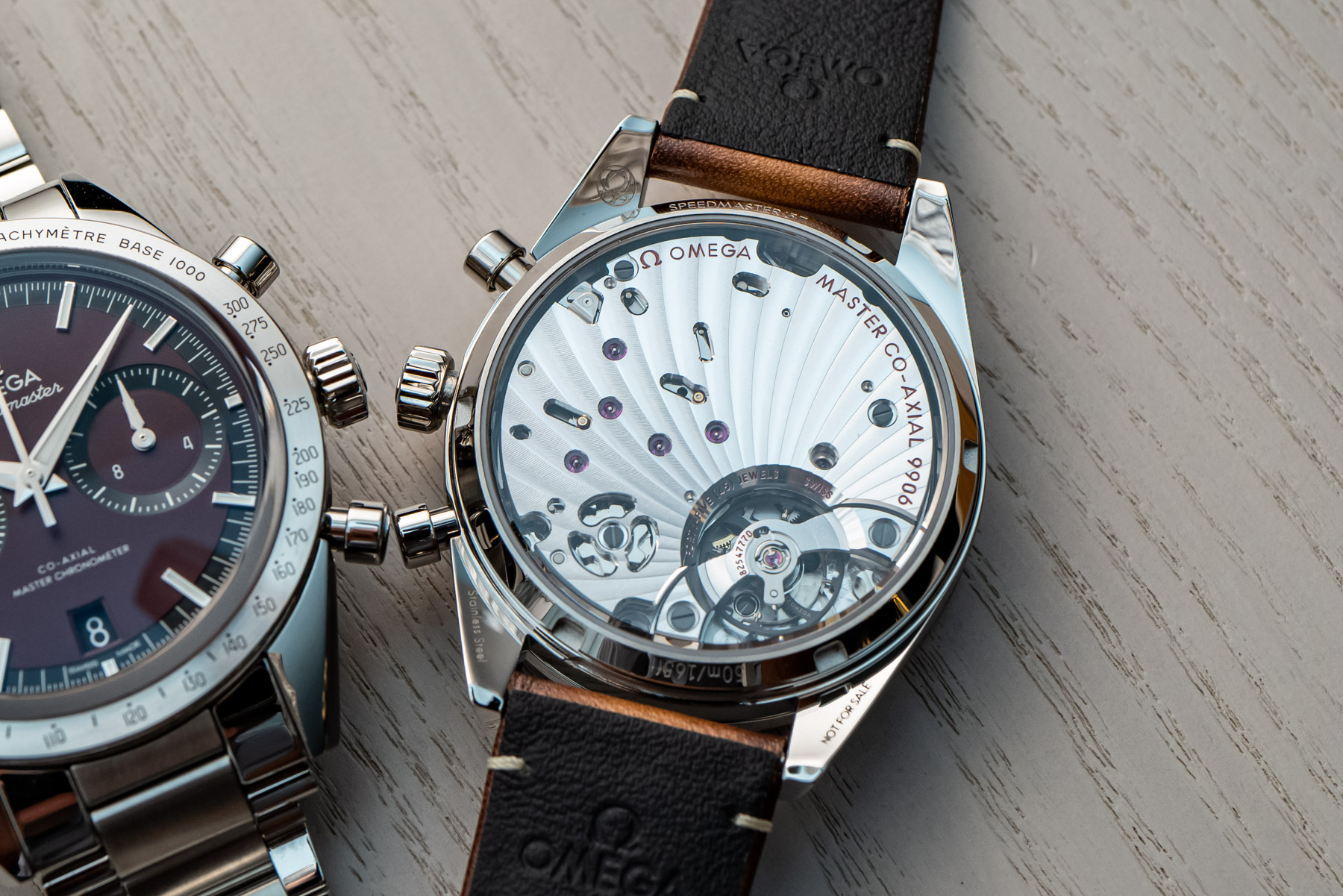 I really can’t put into words the joy I feel when I see a movement through an exhibition caseback that actually fits the case of the watch (rather than looking like the yolk on a fried egg). With the new Speedmaster ’57, the calibre 9906 sits proudly with minimal bezel surrounding it. An absolutely lovely movement, the 9906 features the “arabesque” Geneva waves that fan out from the balance wheel rather than the more conventional pattern that radiates from the center. There are also some other nice finishing touches like a rhodium-plated bridge and blackened screws, barrels, and balance wheel.

The Calibre 9906 is a column-wheel chronograph that operates at 28,000 vph and has twin barrels with a 60-hour power reserve. The movement measures a slim 6.4mm-thick which, sheds over 3mm off the thickness of the case from the previous iteration. 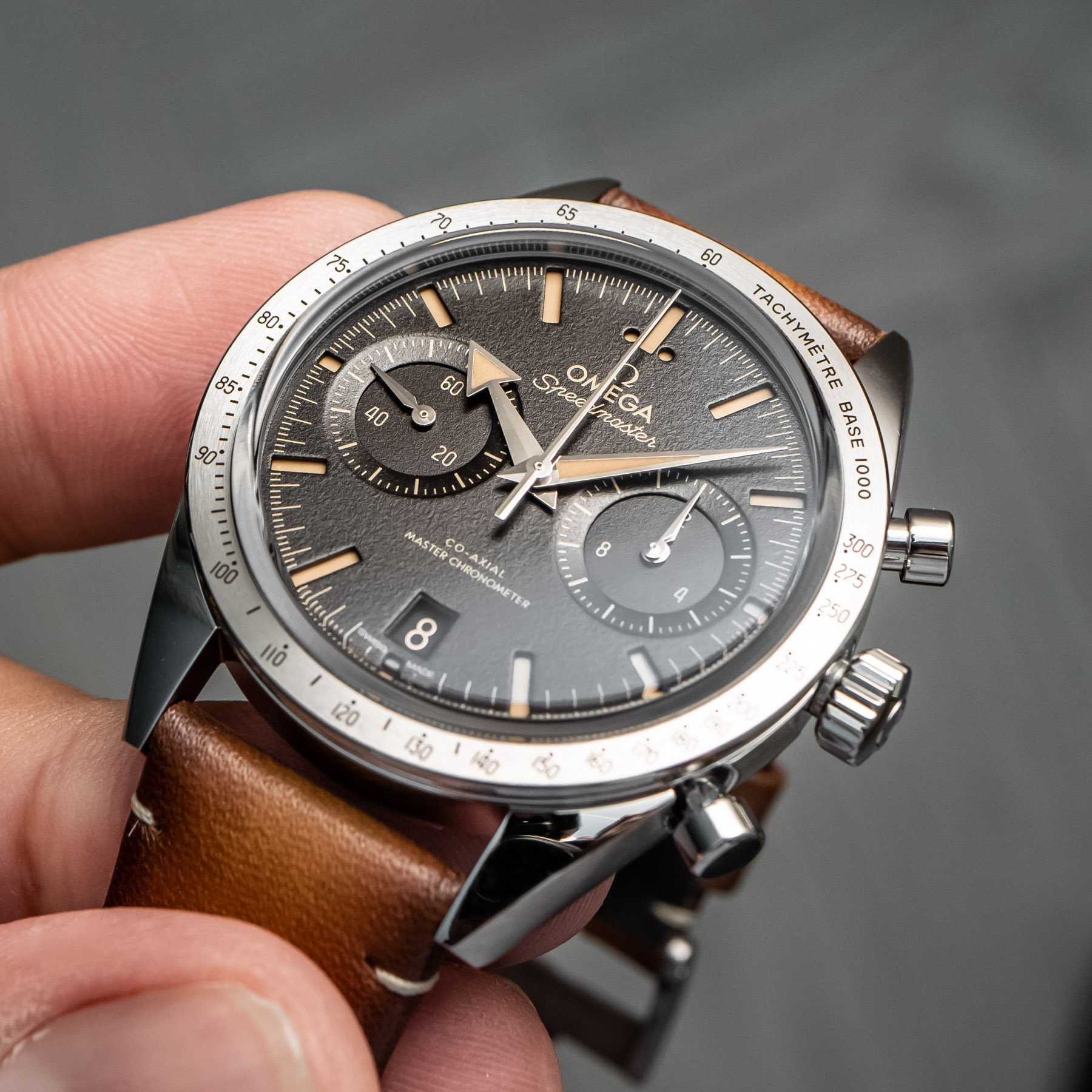 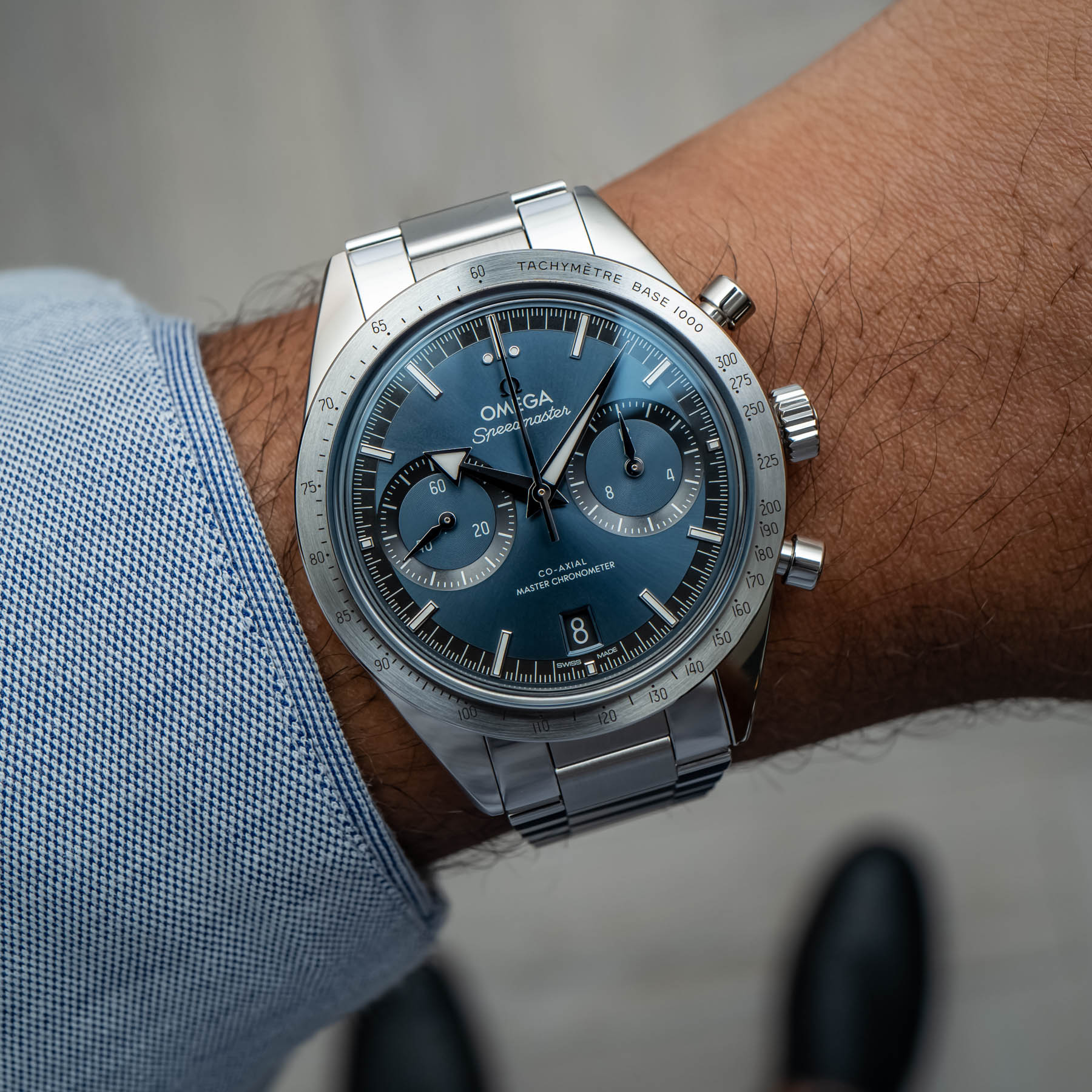 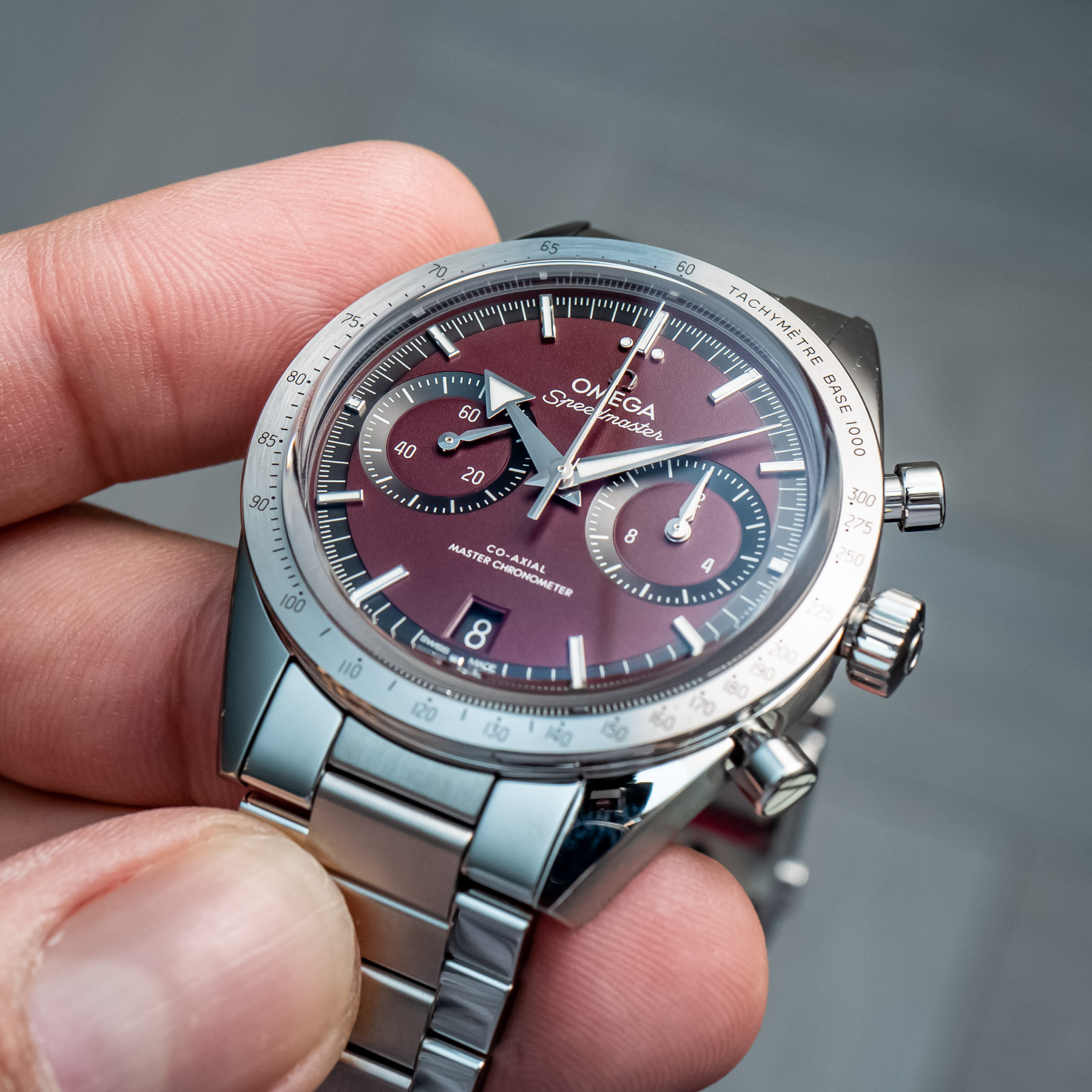 Those broad arrow hands and twin register chronograph layout have always made for a very attractive dial and, fortunately, Omega doesn’t mess with what makes the Speedmaster ’57 great. As previously mentioned, there are several new color dials, but the classic black dial gets some enhancements, as well. With a very cool sandwich dial, the black dial model has recessed markers and indices that are filled with vintage-style lume. The three new color dials being debuted are done in PVD green, blue, and varnished burgundy. 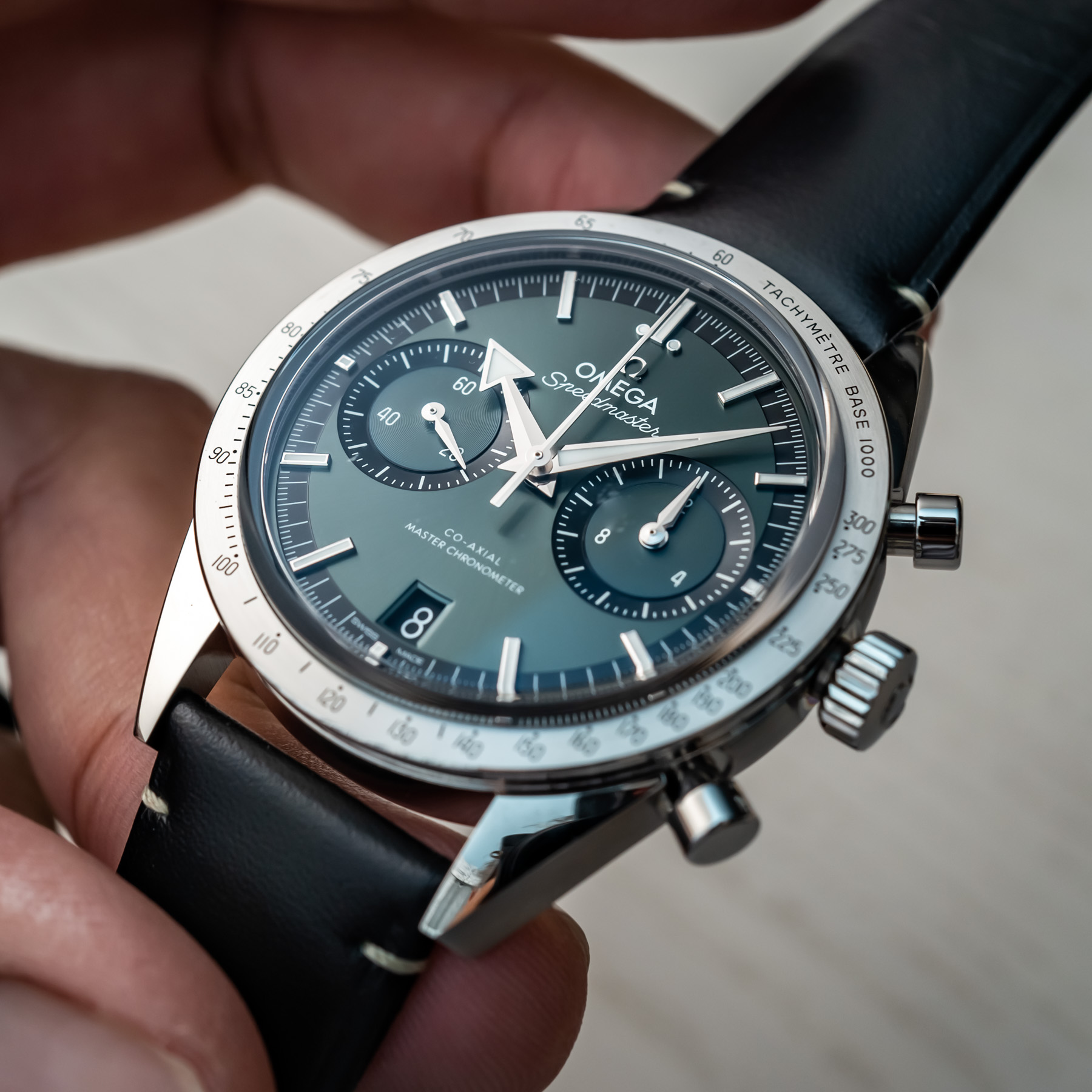 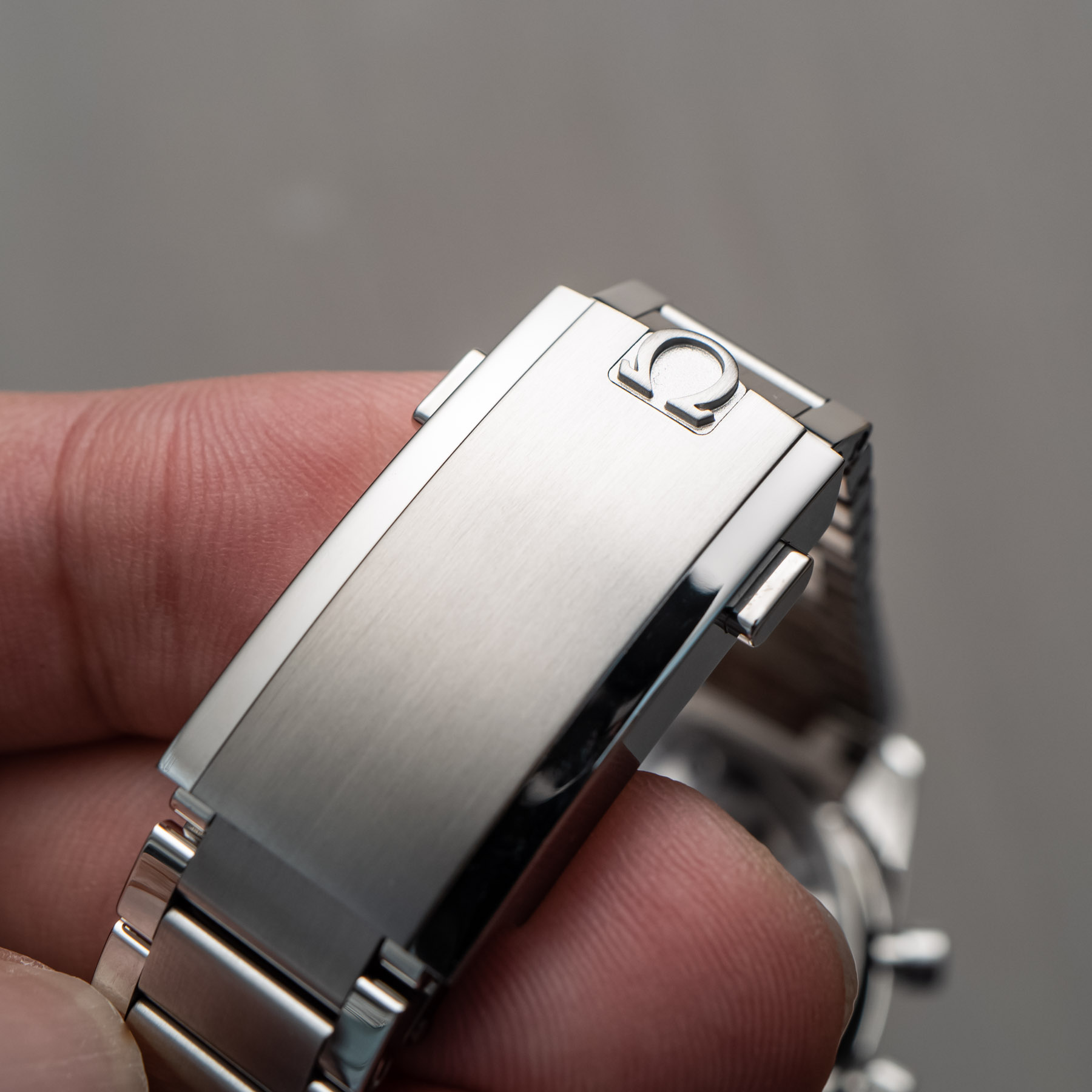 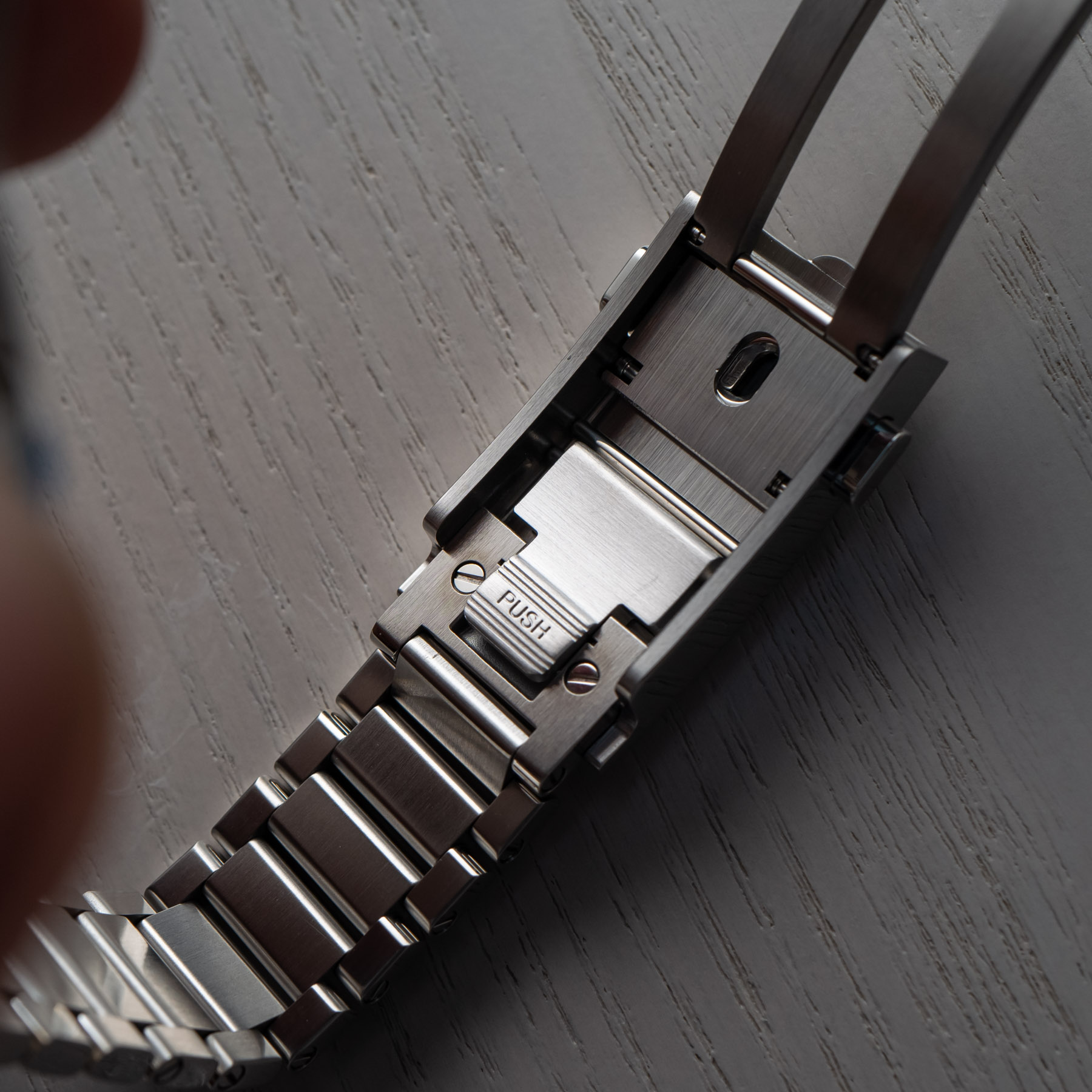 Omega has clearly put significant effort into refining its bracelets. The Speedmaster ’57 features the flat-link style bracelet (seen on the Ed White and Apollo 11 50th Anniversary) with a micro-adjust clasp that extends in two positions up to 2.3mm. The finishes on the bracelet are great, with brushed surfaces and polished edges with beveling throughout the links as well as the clasp.

With a new movement, new dials, new bracelet, and slimmer case, Omega seriously understood the assignment. Every new aspect looks and feels like a substantial improvement, but the price remains unchanged (actually, it’s a few hundred dollars less than the previous model). The updated-for-2022 Omega Speedmaster ’57 is priced at $8,300 on leather strap and $8,600 on steel bracelet. You can learn more at omegawatches.com