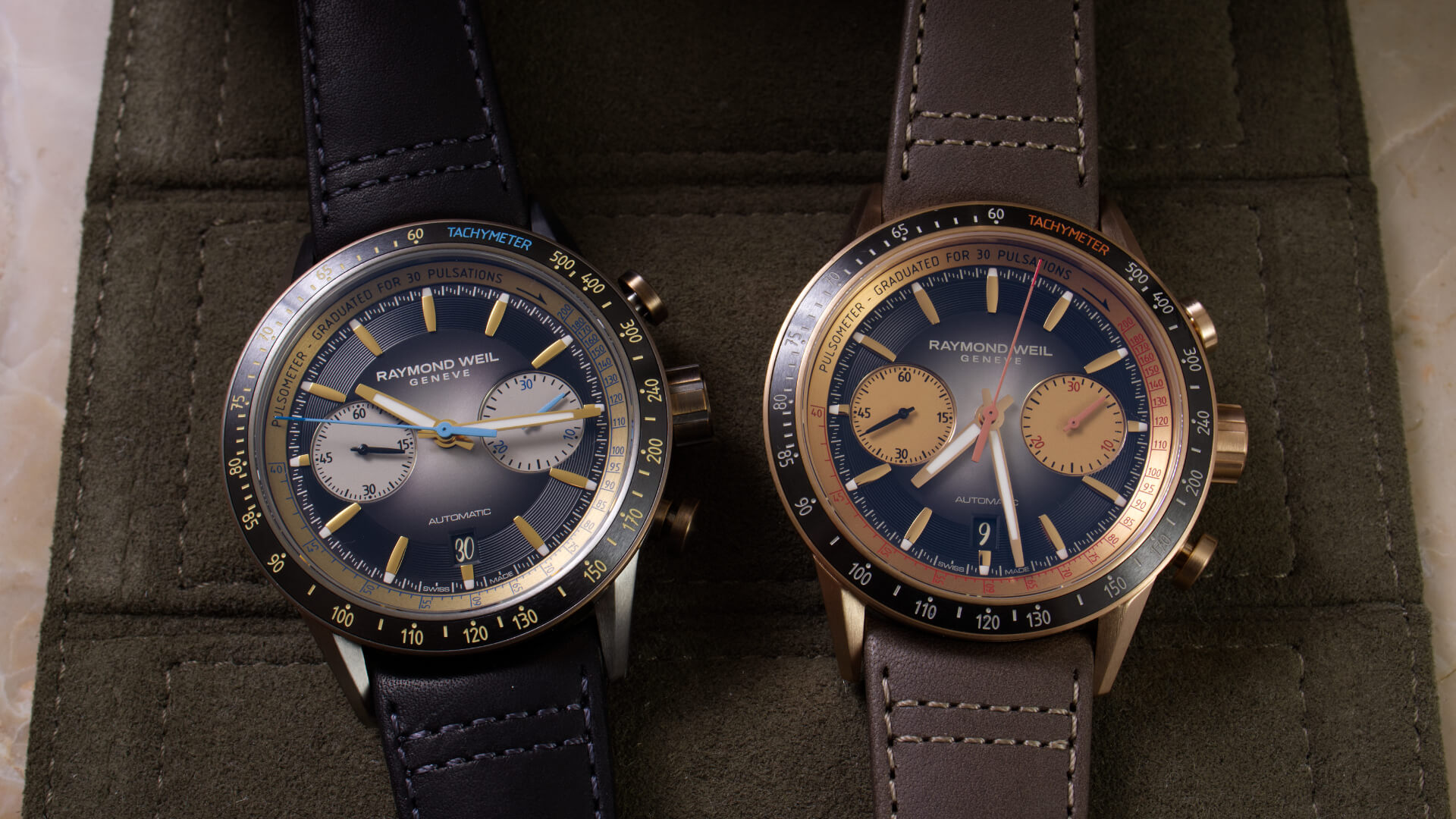 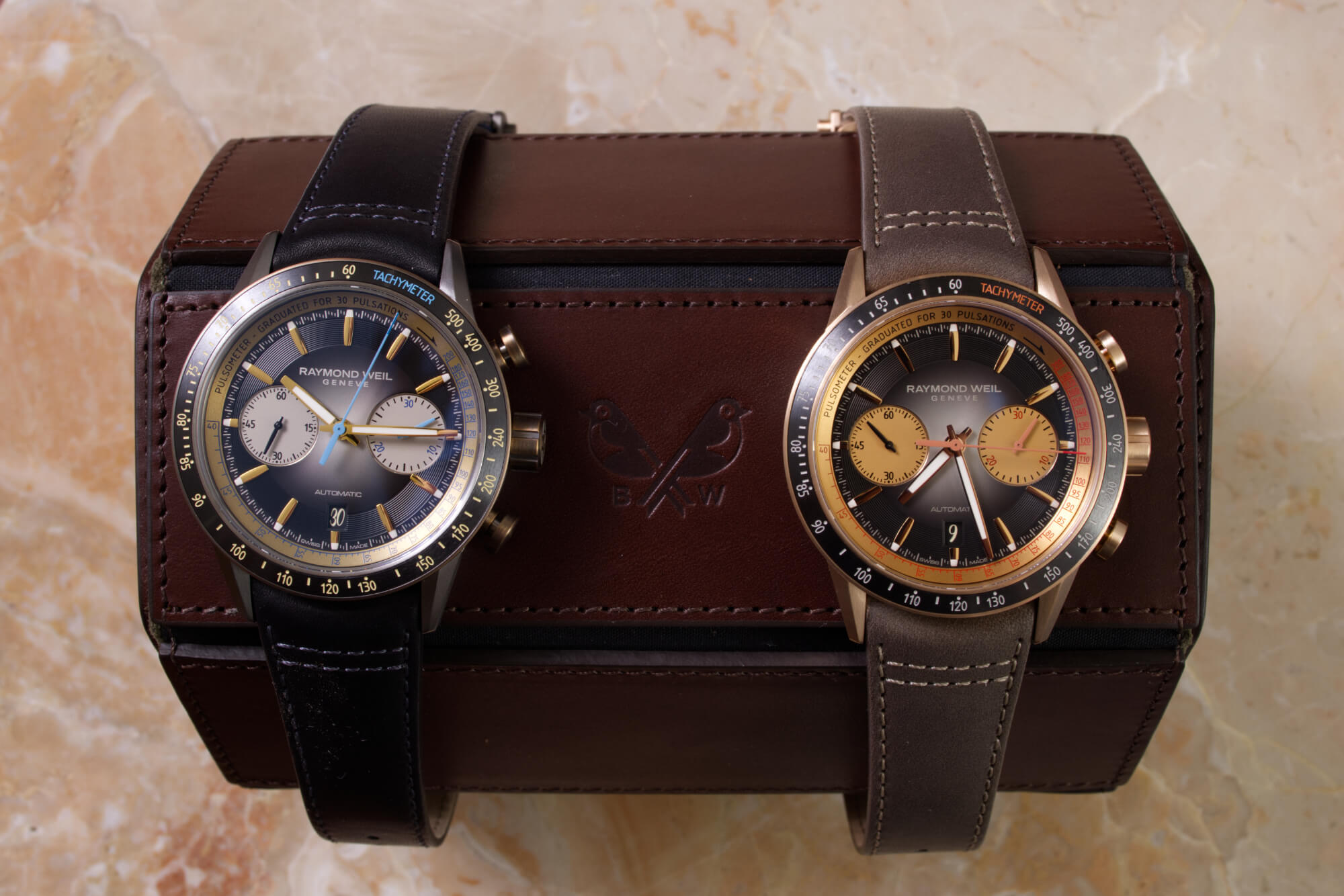 Raymond Weil is ready to have some fun. The entry-level Swiss luxury brand has long pinned its image to music and arts, which has certainly produced some interesting pieces, but it seems it’s starting to create watches with a bit more niche appeal, catering to consumers who want a bit more panache than Raymond Weil typically offers. I think we saw a twinkle of this with the recent green Freelancer Chronograph 7741 release, a sporty watch with irresistible vintage cues. That watch, however, was still a safe bet for the brand, with panda dials and black, white, and steel combinations that guaranteed broad appeal. With the new Raymond Weil Freelancer Chrongraph 7780, though, we’re beginning to see flashes of an exciting new direction for the brand. This vintage-inspired chrono, offered in a limited bronze case and a non-limited titanium case, features bolder colors and unique details that make it stand out not just against Raymond Weil’s catalog, but against the competition as well. 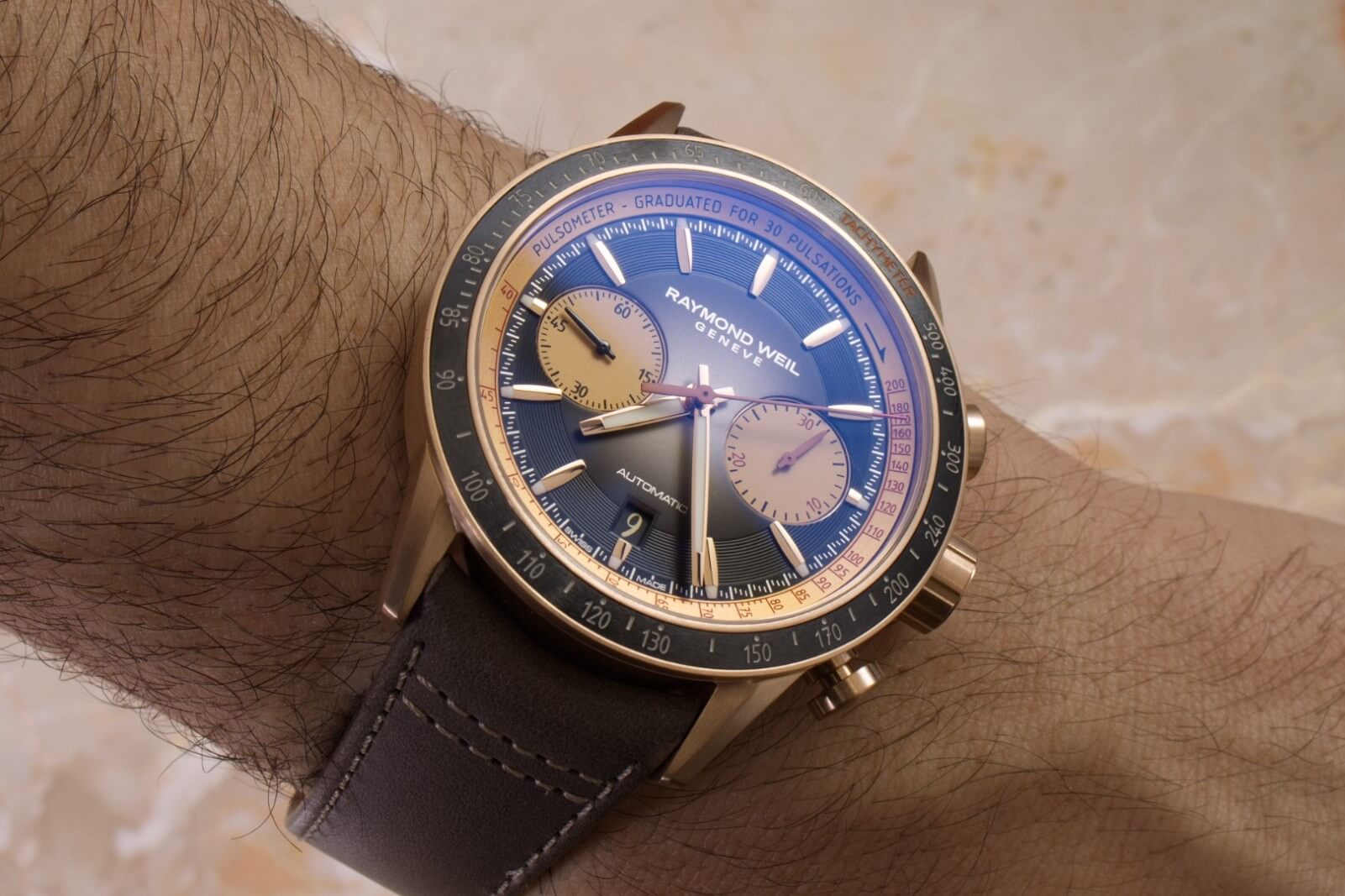 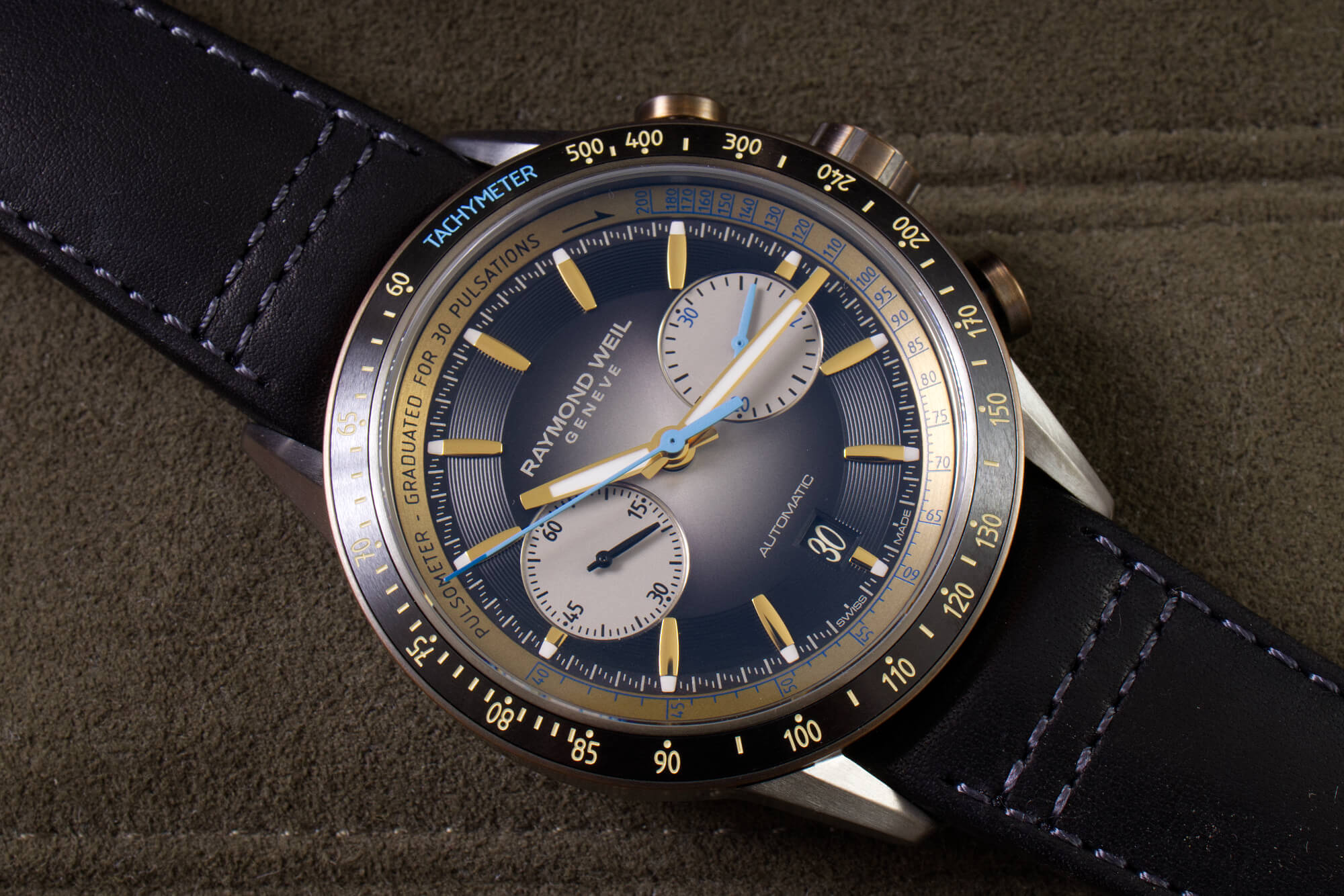 There are two options with the Raymond Weil Chronograph 7780: an all-bronze, 300-piece limited edition and a non-limited, two-tone titanium and bronze option. Both watches feature the same case, with pump pushers and tall, faceted lugs that call to mind vintage Heuer Carreras. The entirety of the case is brushed, giving the watch a much more rugged aesthetic that is reinforced by its somewhat robust dimensions — 43.5mm-wide and 13.7mm-tall. Those dimensions — plus only a modest slope to the lugs — make for a watch that sits prominently but not unwearably on the wrist. While the limited bronze model features bronze everything, the two-tone model substitutes a titanium case while keeping the bronze pushers, screw-down crown, and bezel; both watches feature a black ceramic bezel insert with a gold-filled tachymeter scale. The watch comes on a brown or black leather strap with a branded folding clasp and double-stitched curved ends for a perfect fit; there’s an extra set of lug holes for third-party straps, though quick-release spring bars would’ve been nice on the included strap. When considered next to each other, there’s a stark contrast between warm and cool, which starts with the cases and straps, is underscored by the red and blue “tachymeter” texts on the bezel, and continues on the dials. 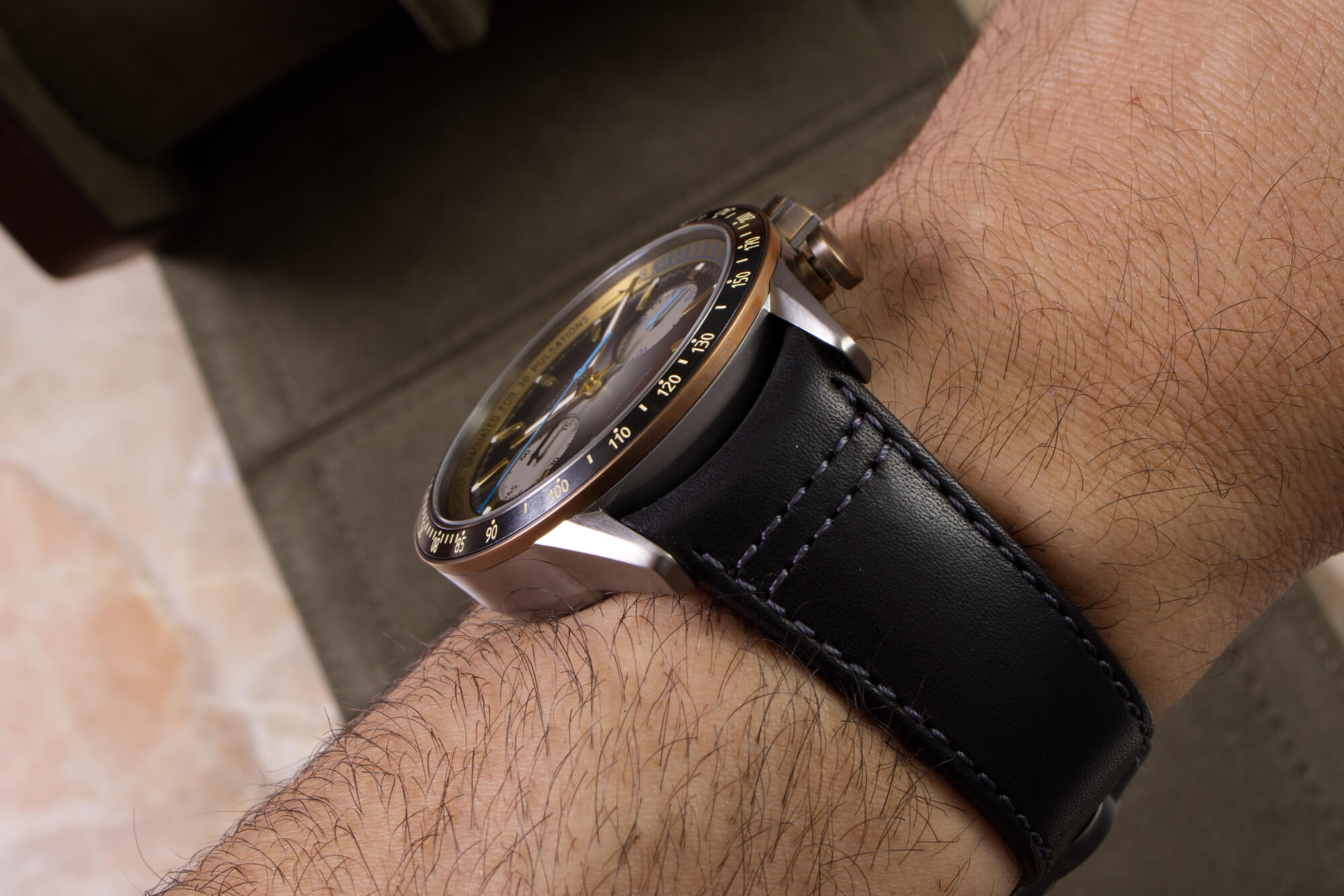 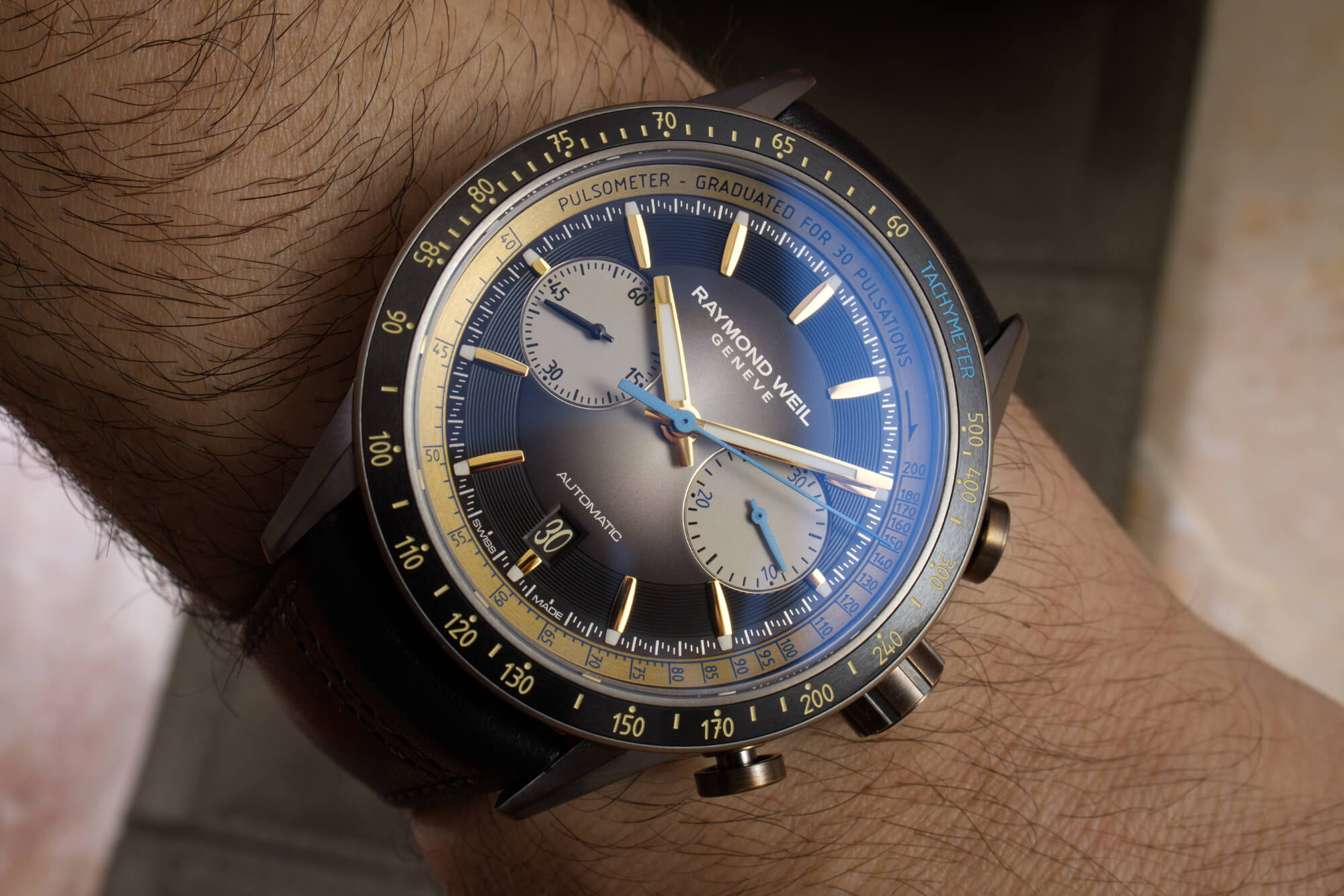 Under the sapphire crystal, there’s a bounty of details that really bring the watch to life. The dials share their center gradients, with a smoky gray center shifting to the black circular grooving under the rounded rectangular applied indices (rose-gold tone on the bronze, gold tone on the titanium). The hands on each watch match the indices in shape and color, and there is ample Super-LumiNova to let them shine in low light (plus the pips at the outer edges of the indices). The circular grooving really gives the watch a motorsport feel, which the brand was aiming for (the product copy on its site talks extensively about a custom Raymond Weil motorbike). The titanium model keeps itself cool with silver registers and blue accents throughout the dial, while the bronze doubles down on warm tones with bronze-tone registers and orange-red accents. There are two details that really stand out, though. The first was the bronze pulsometer ring, adding an extra dash of (perhaps frivolous) utility to the watch, but also allowing for more blue/orange-red accents; I like how it brings the bronze into the dial instead of keeping it to the case like most bronze watches. By far the most noticeable detail, though, is the font used on the date wheel. It’s a playful, script-like sans serif font that brings a surprising lightness to the watch. Truth be told, it clashes with much of the watch’s design, which while sporty, lacks the exuberance of the date font.  On the Chronograph 7780, the date font seems to be an afterthought, or at least an endpoint; just imagine, though, what Raymond Weil could do with that font as a starting point for an entire watch design. 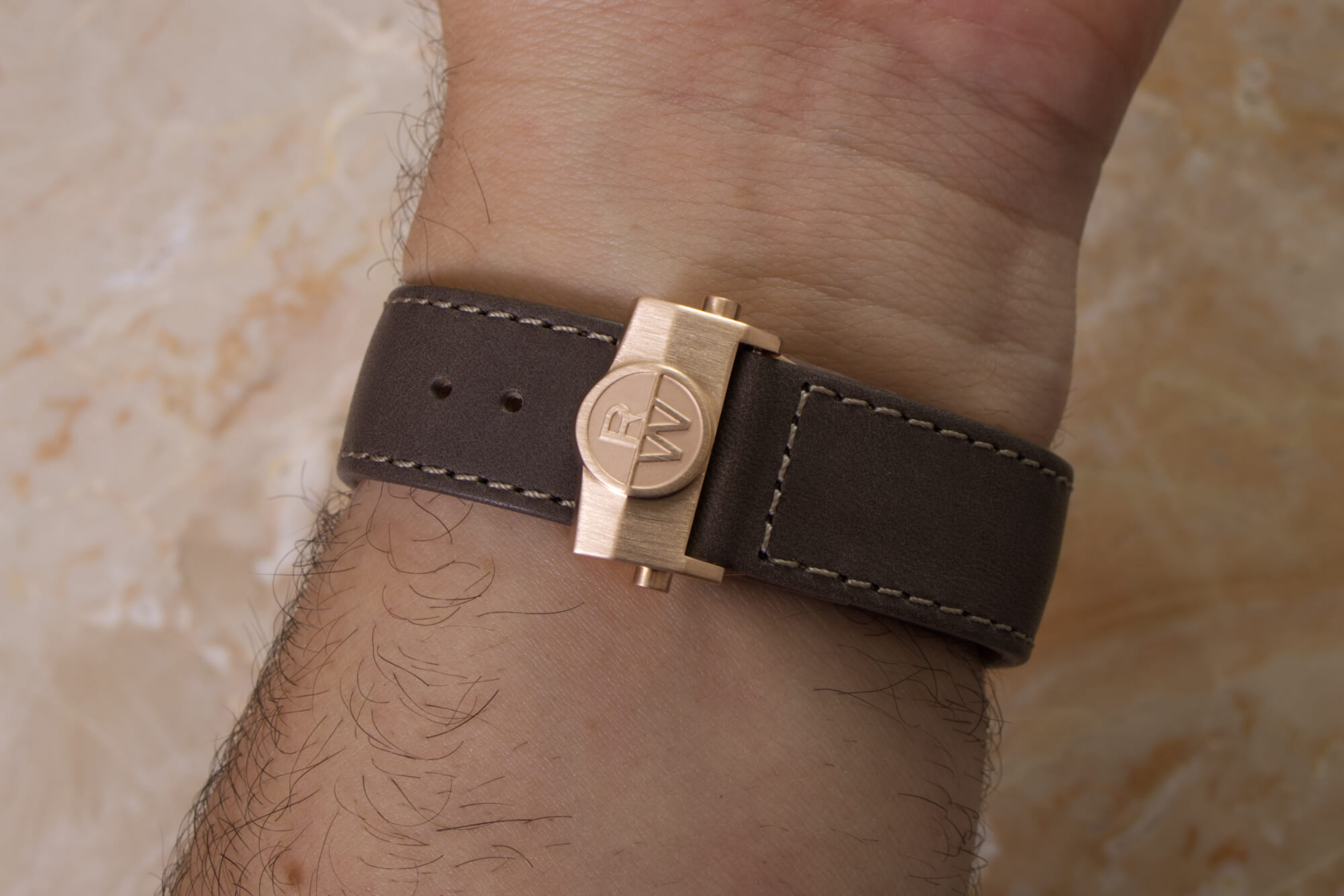 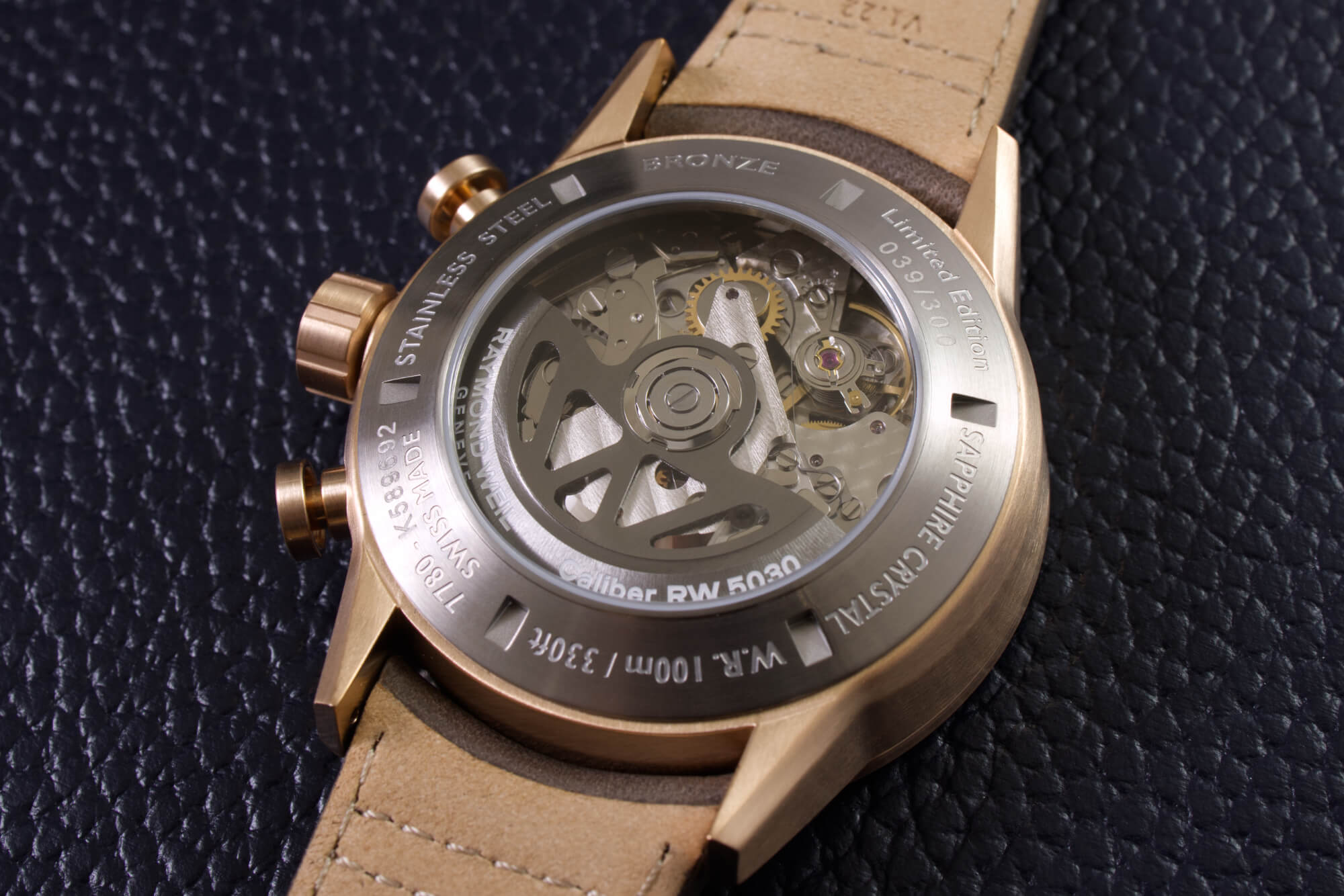 The Raymond Weil Chonograph 7780 is equipped with the brand’s RW 5030 caliber, with a custom ‘W’ rotor and some movement decoration, all visible through the sapphire glass on the screw-down caseback. The brand only provides specs for the power reserve — 56 hours — but a little digging reveals that the RW 5030 is based on the Sellita SW510. Curiously, the RW 5030 is also identified as the caliber used on the Chronograph 7741, which features three registers and no date.  The riddle is explained thusly: Sellita lumps all of its chronographs with 3, 3-9, and 3-6-9 layouts under the SW510 designator, with each layout variation receiving its own extended designation; Raymond Weil has simply opted not to distinguish between the variations. What you do get is a cam-operated chronograph with a quickset date, hacking, and 27 jewels, running at 28,800 vph. Nothing to complain about there. (By the way, if you’ve been wondering about the handsome watch roll, it’s the handmade Double Watch Roll from Bennett Winch, priced at $715.) 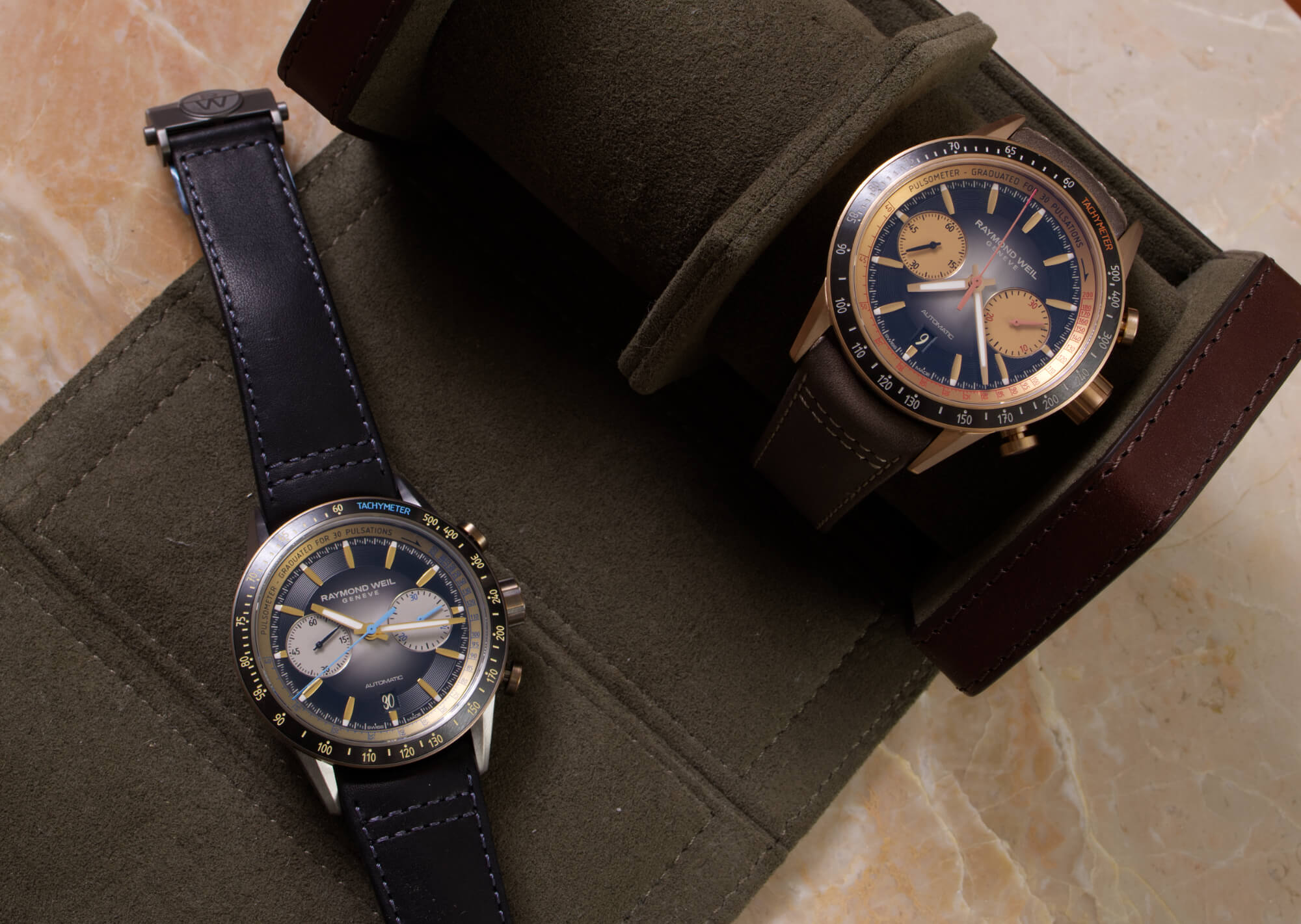 The quality of the new Raymond Weil Chronograph 7780 is unquestionable and its design, while perhaps not for everyone, is far from polarizing and fits nicely into the vintage trend we’re (still) experiencing.  As I said at the top, though, this watch hints at great potential at Raymond Weil for producing truly exciting watches. The dial texturing, playful hour markers, and colorways all suggest the brand is ready to break out of its mold, but it’s the flourish of the date font where it really shows. The limiting of the bronze model to 300 pieces suggests the brand feels it’s taking a risk with that particular design and wants to test the waters. It’s a risk I hope pays off and a direction I hope they embrace. The Raymond Weil Chronograph 7780 watches are available now from authorized dealers and directly from the brand. The titanium model is non-limited while the bronze model is limited to 300 pieces; the watches are priced at $3,495 USD and $3,995 USD, respectively. You can learn more at Raymond Weil’s website.