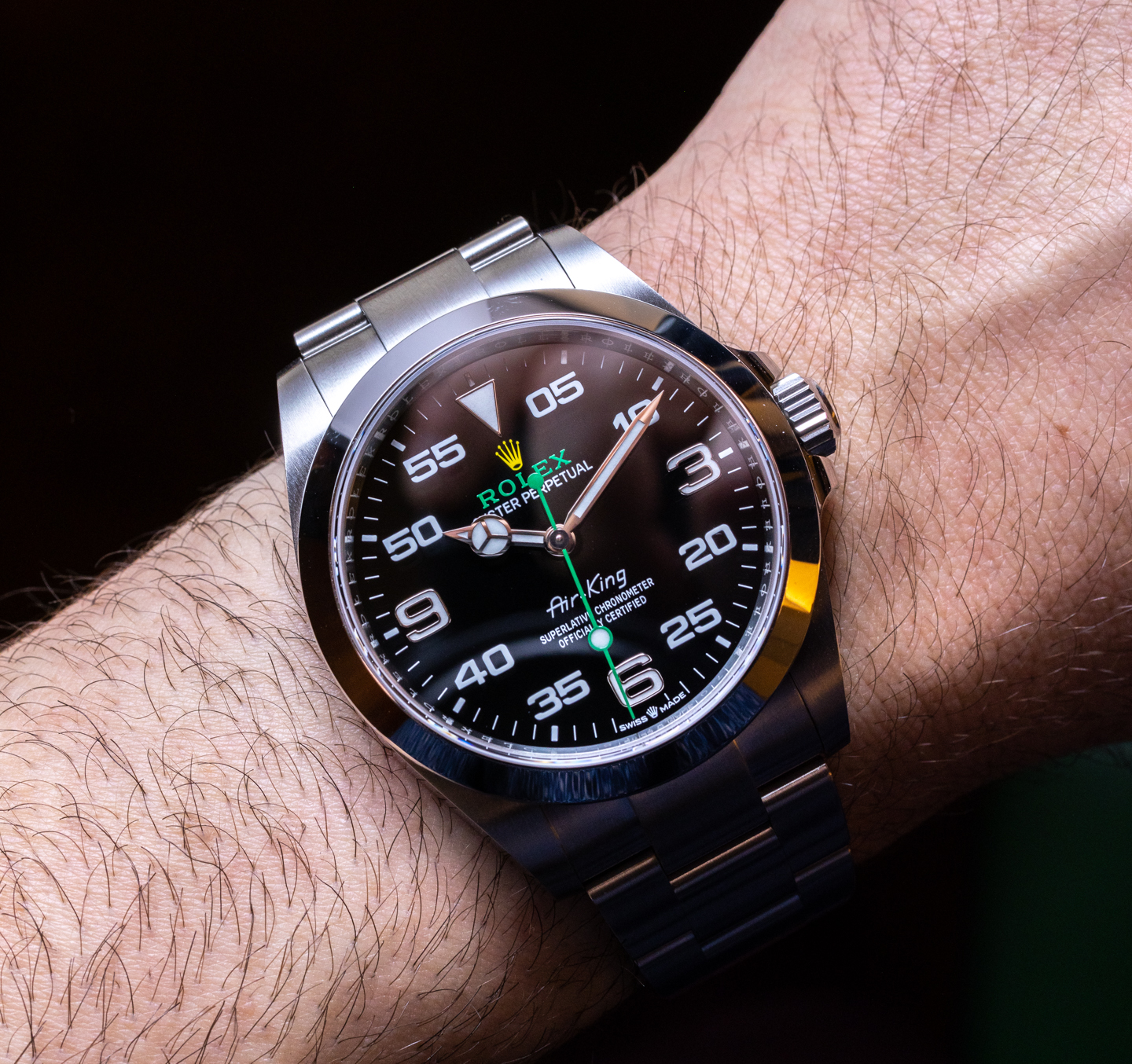 For 2022, Rolex has thoroughly redesigned and relaunched the Oyster Professional Air King watch with a new model known as the Reference 126900, which aBlogtoWatch debuted here. While the “Air King” (AKA “Air-King”) name is not new at Rolex, this particular model family really started in 2016 when Rolex launched the Air King reference 116900 (aBlogtoWatch hands-on here) that the new 126900 entirely replaces. There is a lot to say about the new Air King watch, perhaps most importantly that Rolex has now “fixed” one of the weaker links in its sports watch product collection. The previous generation Air King was hard to define as a truly novel model because it was, for the most part, a different dial placed on the aging Rolex Milgauss platform. For 2022, the Rolex Air King not only gets its own case and updated in-house Rolex mechanical movement, but Rolex also really did refine some of the core issues enthusiasts had with the previous-generation product. So, say hello to yet another highly desirable Rolex watch that will still be very challenging to acquire for purchase this year.

Before talking about the design of the Air King 126900, it is important to discuss how this product fits within the larger Rolex watch product lineup. The previous generation Air King was more or less priced at the brand’s entry-level price point starting at just under $6,000 when it was originally launched. Rolex has now made it clear that the Air King is walking a few steps up the ladder in price and allowing the Rolex Oyster Perpetual to be the brand’s entry price-point for men’s steel sport-style watches. The new reference 126900 Air King watch is priced at $7,400 USD. This is, however, still close to Rolex’s entry-point for men’s watches, these days. 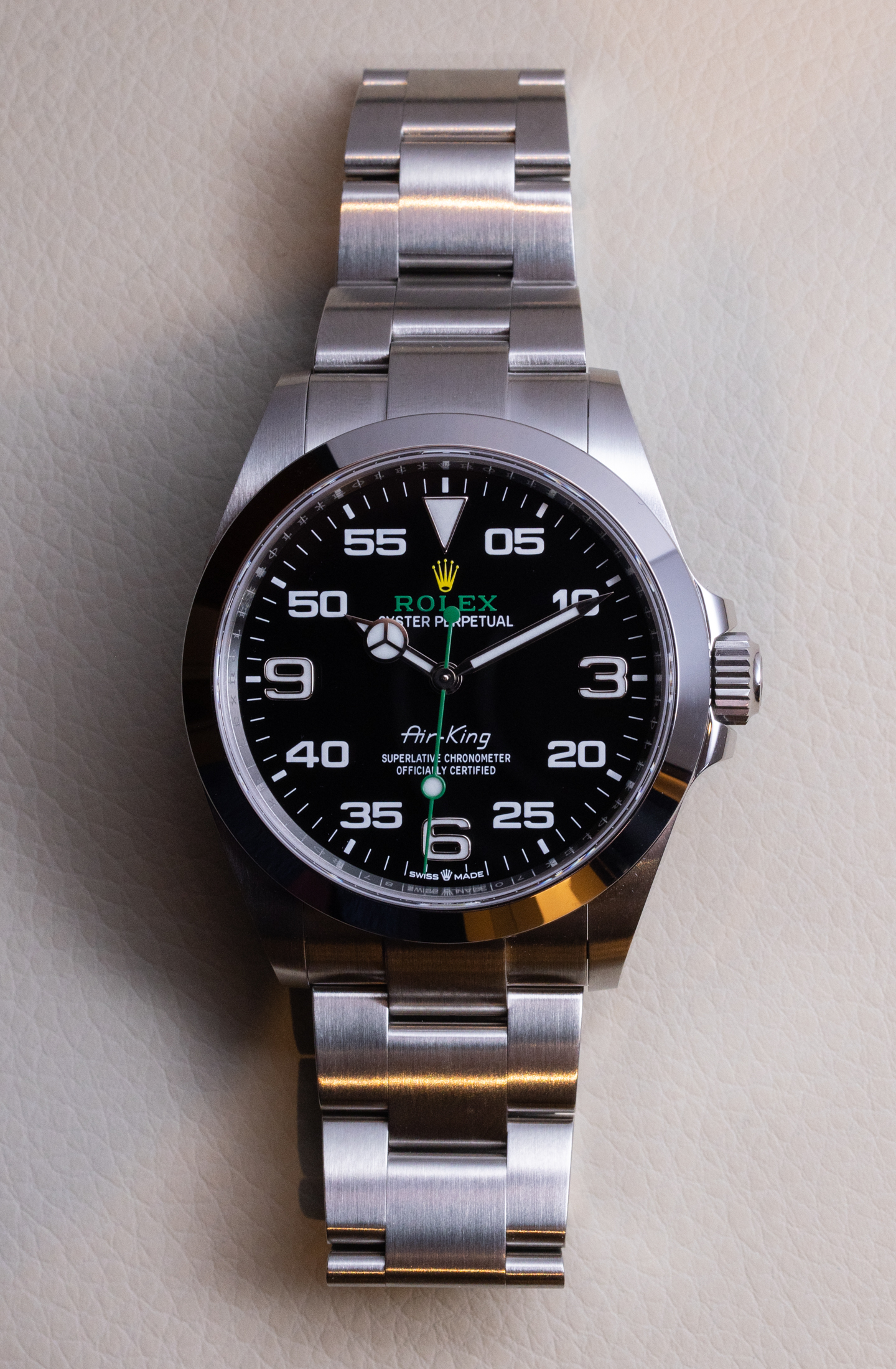 Don’t let the “Air King” name confuse you — this isn’t a pilot’s watch in modern form (despite the historical relationship between the Air King models and aviation appreciation). In fact, the dial of the modern Air King is inspired by a car — the world’s fastest car (at least it was intended to be). In 2011, Rolex announced that it was sponsoring a team known as Bloodhound SSC (later renamed to Bloodhound LSR when it was purchased by a new entity), and Rolex designed two gauge dials that went into the car’s cockpit, including the speedometer and clock. aBlogtoWatch covered the Rolex & Bloodhound 1,000 mph car project here. It was correct for Rolex to back such an interesting project, but the jet-powered Bloodhound LSR car was never able to reach its 1,000 mph goal (I think it got up to around 700 mph), as funding ran out, and I believe that the actual car itself was later sold. The legacy of Rolex’s relationship with the Bloodhound jet car remains in the dial of the modern Rolex Air King watch.

For 2022, the Air King isn’t just all-new, it also fixes some of the design elements that enthusiasts felt were a bit lacking on the dial. The watch is still in Rolex OysterSteel and 40mm-wide but otherwise is slightly different in form and refinement. Let’s start with the case, which has a slightly new, flatter design and now has crown guards. It is water-resistant to 100 meters and uses a combination of brushed and polished surfaces for the case and all brushed finishing for the bracelet. The overall look is slightly distinctive, although it is very much an “Oyster Professional” when viewed from pretty much any angle. The bracelet now also has a formal Oysterlock safety clasp and an Easylink comfort extension. This replaces the slightly less sporty and less secure older bracelet deployant system. At this point it is also entirely reasonable to ask the question, “so when is Rolex going to give the Milgauss collection a redesign?” 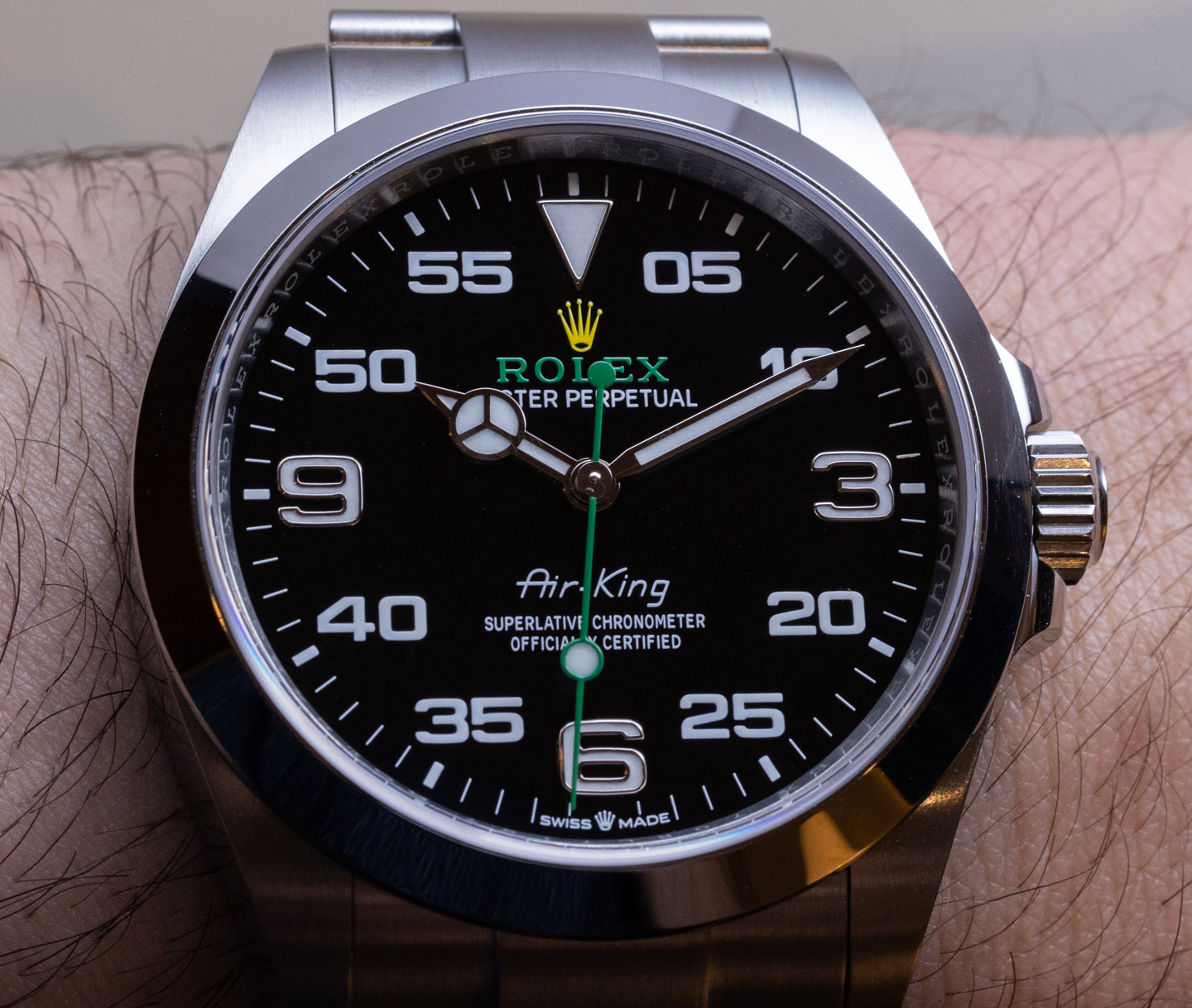 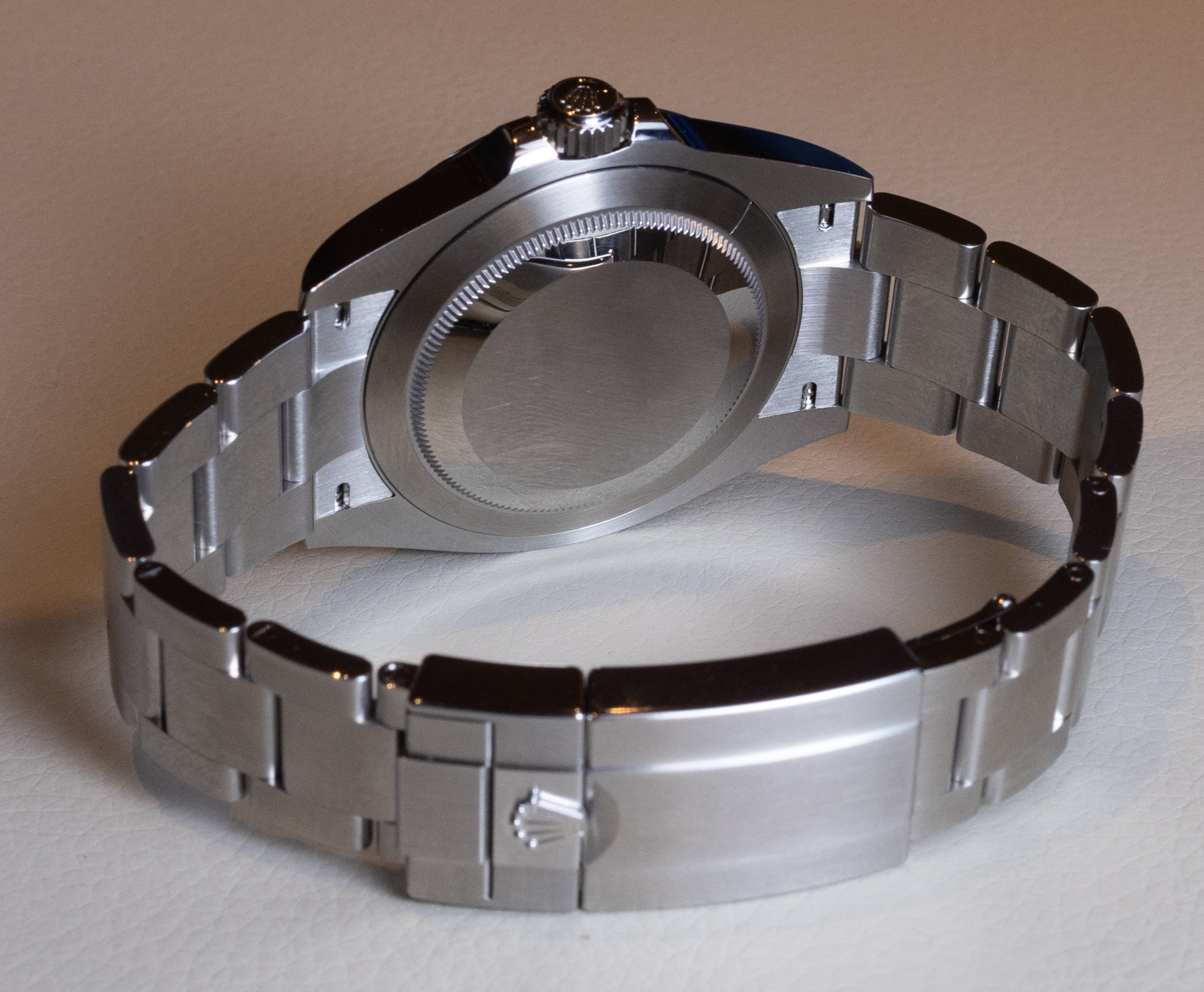 Inside the Air King watch is one of Rolex’s more modern automatic movements: the caliber 3230, which exists in other three-hand no-date sports watches such as the Submariner (the no-date version). This “Superlative Chronometer” movement is COSC- and Rolex Chronometer-certified and is accurate to +/-2 seconds per day (that’s pretty good). The movement operates at 4Hz and has a power reserve of 70 hours while making use of a Parachrom hairspring that is more or less impervious to magnetism.

Rolex also revised the Air King dial — hardly a fan favorite when it came out in 2016. It wasn’t clear to many people that the dial was inspired by the Rolex-designed gauges from the Bloodhound car, nor was the overall execution refined enough to be a serious classic. That said, most people did agree that it was a good thing to see Rolex experimenting with something new, and for 2022, the Air King 126900 watch gets a dial treatment that I think the model collection deserves (even if the changes are subtle, at best). Recall that the Air King is the only current Rolex watch to actually feature the gold/yellow and green crown and logo combination that you can see at more Rolex stores, for example. 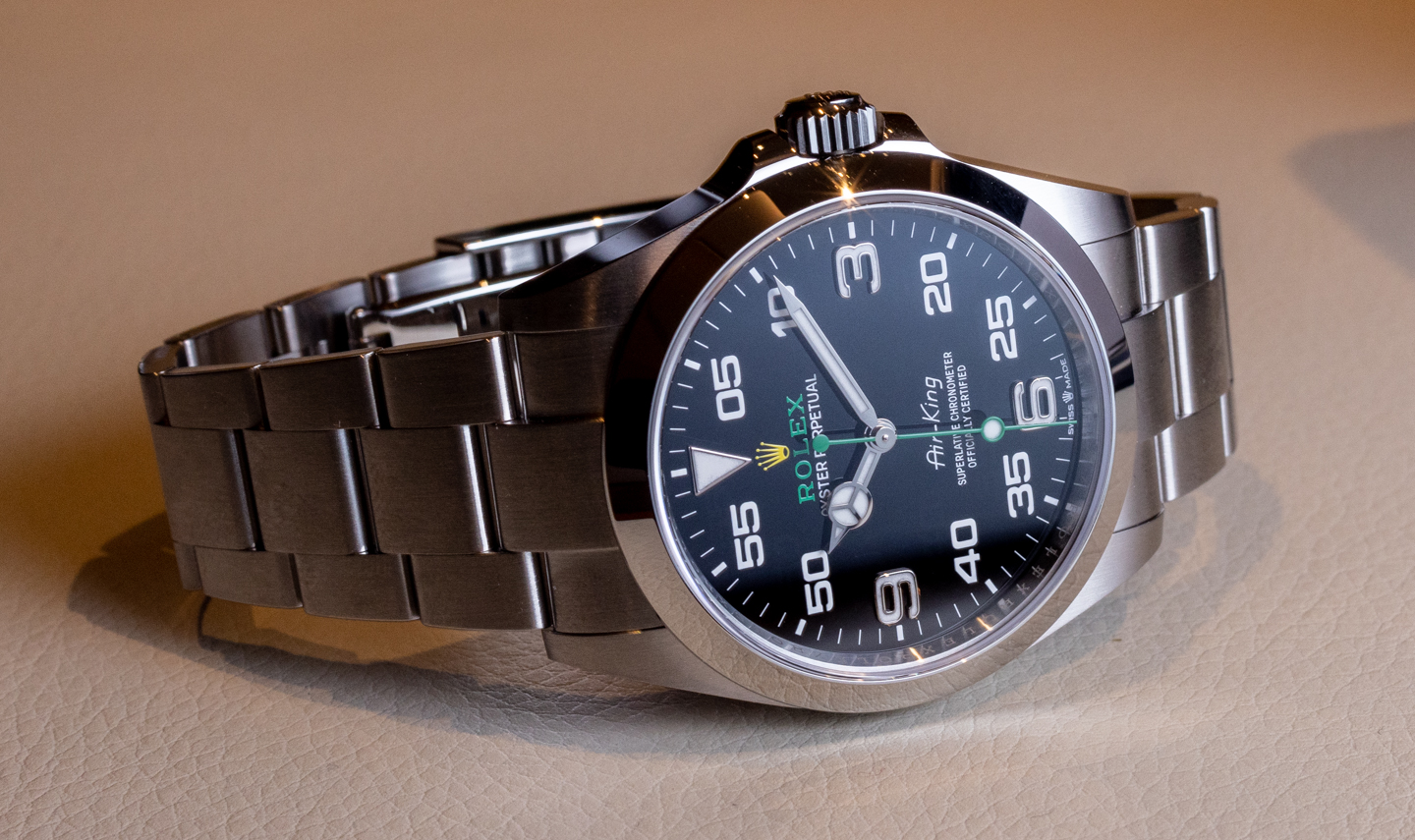 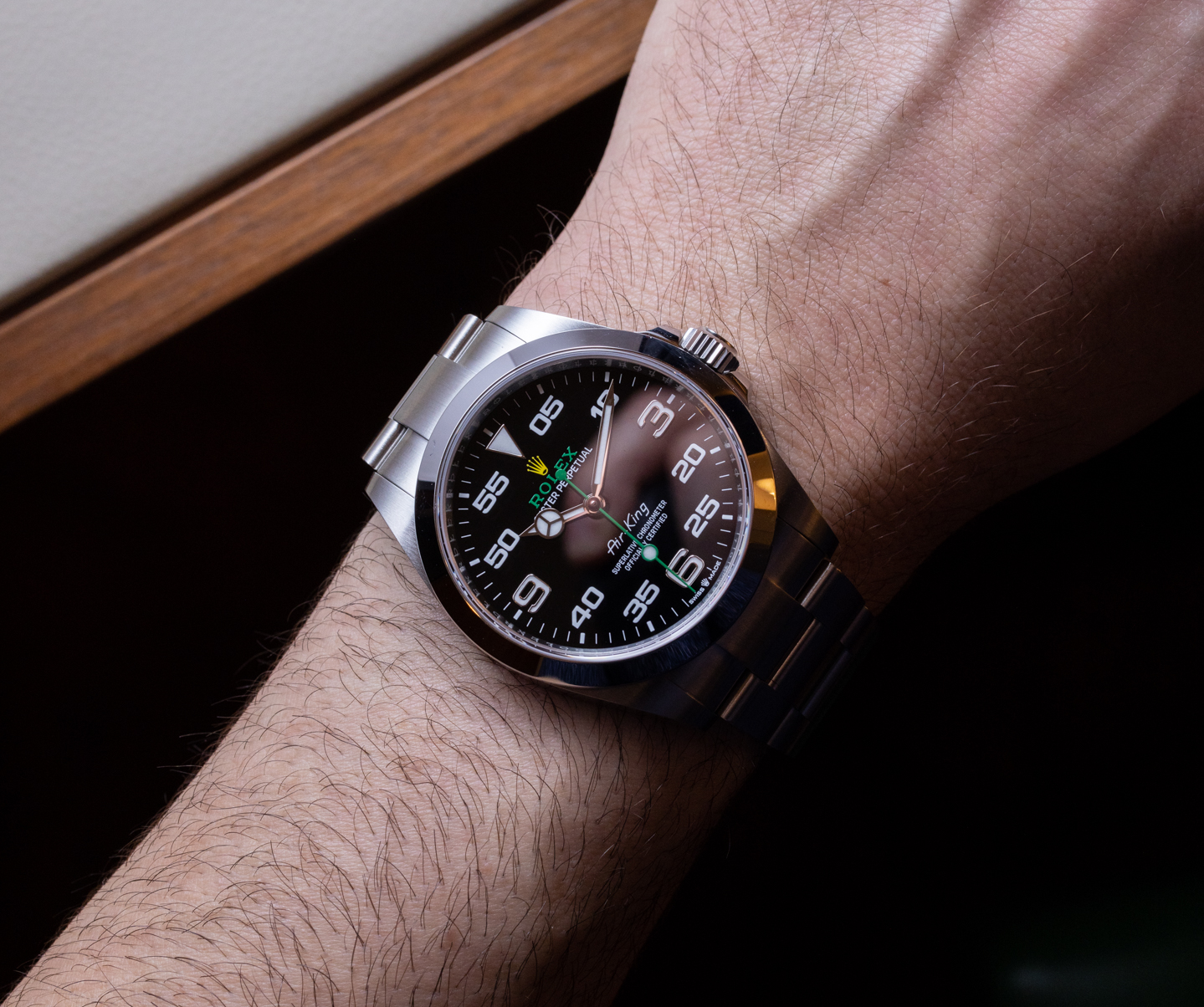 One change to the dial is the addition of a “0” to the five-minute marker. Not having a preceding zero is how the Bloodhound clock gauge made for an oddly asymmetric look that Rolex wisely decided to replace with a “05” marker versus the “5” marker. Most important, in my opinion, is the fact that Rolex removed the low-end-looking applied polished 3, 6, and 9 o’clock hour markers and replaced them with similar markers that are painted in Rolex’s Chromalight luminant. Not only is the dial now much better lumed, but the once ugly (to me) applied hour markers are finally pretty decent-looking.

The great thing about being a Rolex watch today is that it doesn’t require much pushing to be purchased. That means Rolex doesn’t need to do much story-telling for the Air King 126900 to be a hot model. It is thoroughly modern in the context of new Rolex timepieces, and it finally offers a more distinctive wearing experience than just a different dial on an existing platform. Rolex also took market feedback about the previous 116900 Air-King watch to heart and relatively rapidly entirely overhauled the collection. The Air King is officially ready for enthusiast’s wrists — now let’s just see if you can get one. The Rolex Air-King reference 126900 watch has a retail price of $7,400 USD. Learn more at the Rolex website here.