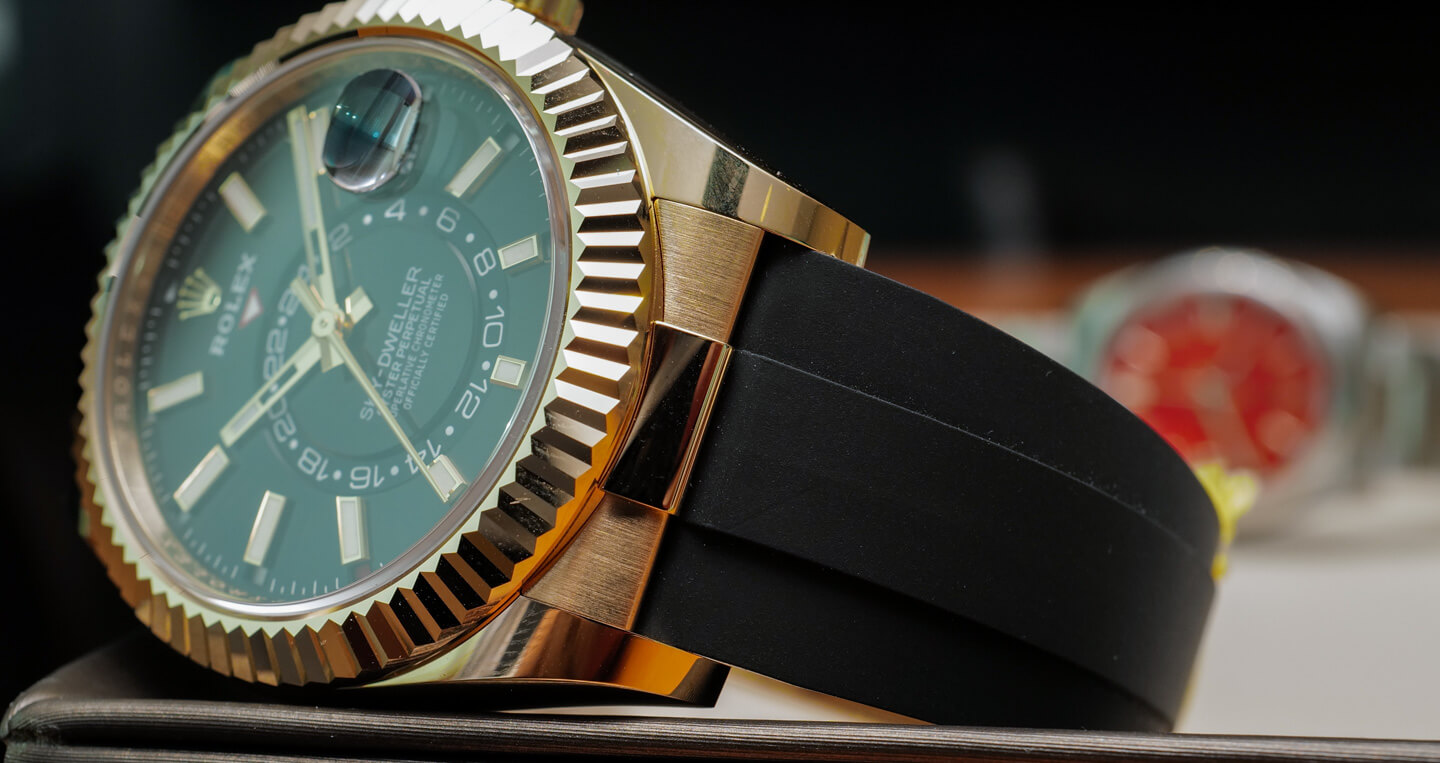 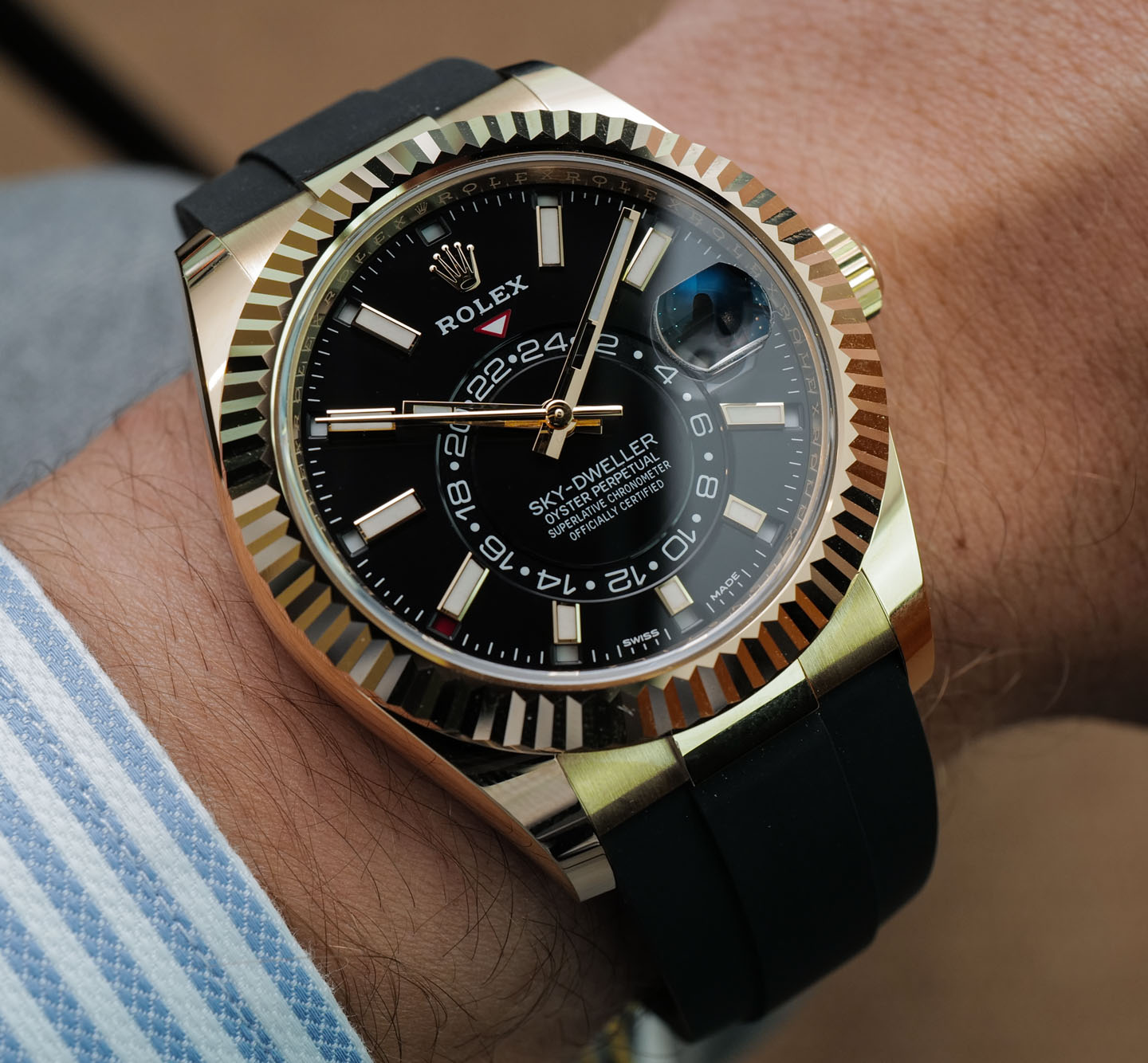 Boy, that sure escalated quickly, didn’t it? In going from the prospect of “no new Rolex watches in 2020” at the summer’s outset to a quartet of new Submariners, and a dazzling rainbow of new Oyster Perpetuals all in the short span of this week, watch fans have been taken for quite a ride this summer. Amidst the aforementioned buzz, there was still “one more thing” though – maybe not quite as impactful in the Steve Jobs sense this time around, but this thing is still no less of a welcome addition to the parade of new releases from the Crown: the Sky-Dweller is now available on Rolex’s excellent rubber Oysterflex Bracelet. 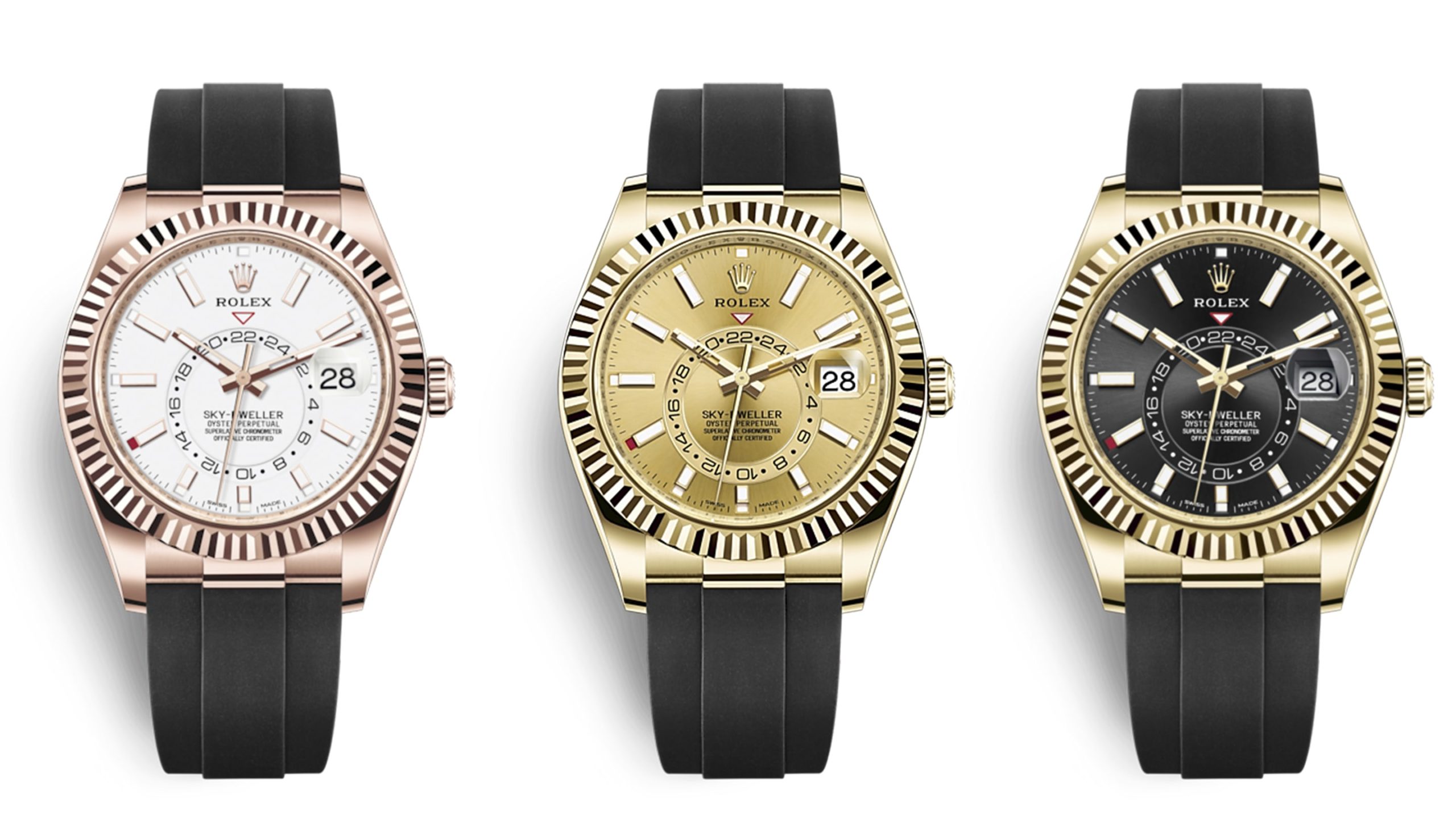 Before getting too far into the nitty-gritty, it’s probably worth pointing out that the trio of new gold Sky-Dweller references on the Oysterflex don’t bear any of the case or movement updates that have characterized the Submariner and Oyster Perpetual launches this week – this particular announcement is reserved to the strap option only – not unlike when Rolex made the Oysterflex available for the Daytona in 2017, or when it did the same for the Yacht-Master last year. And just like both the aforementioned, this new rubber-clad Sky-Dweller is only available in precious metal: yellow gold, or Rolex’s proprietary Everose pink gold. 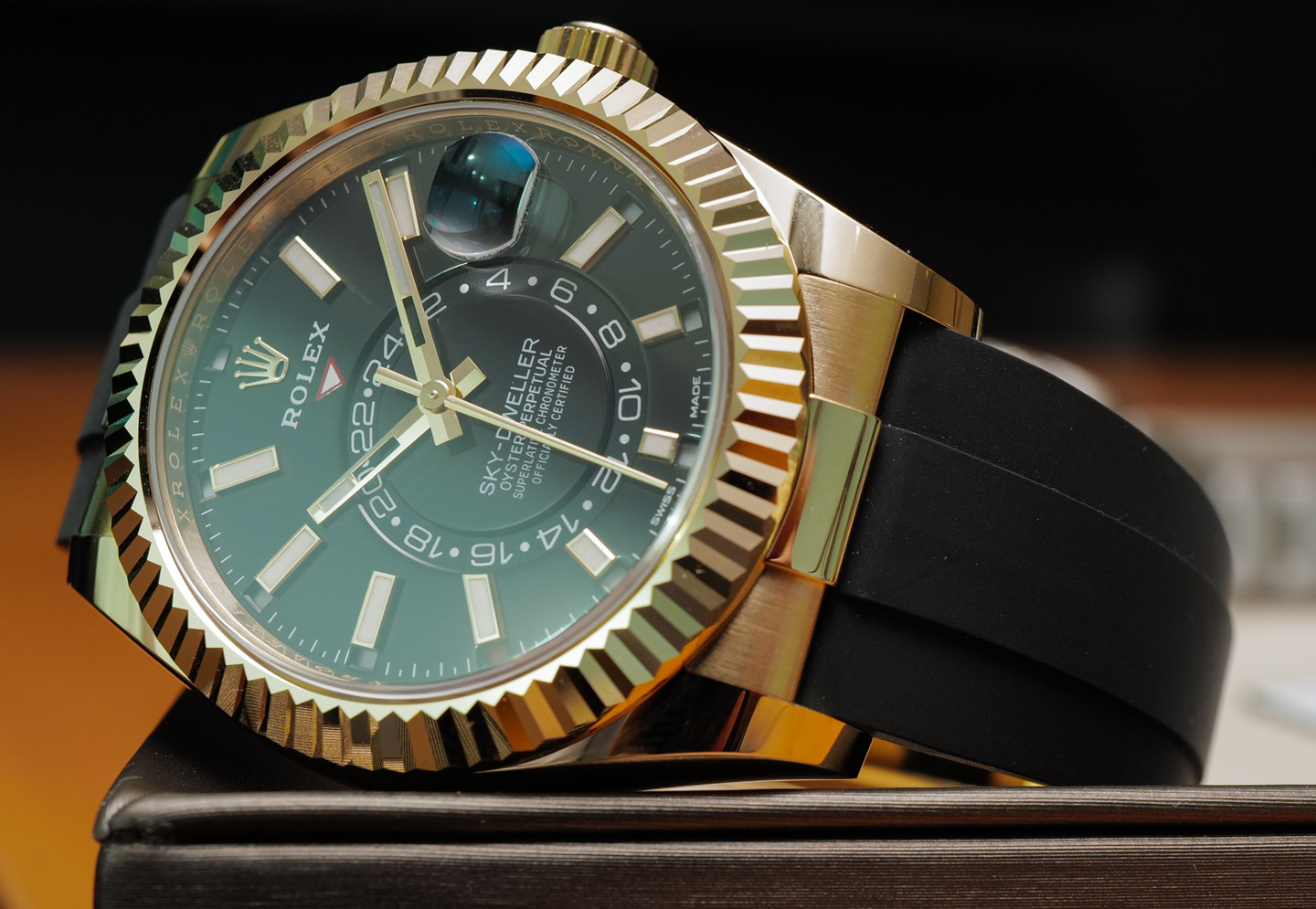 Introduced at Baselworld (remember when that was a thing?) back in 2012, the Sky-Dweller has remained Rolex’s most complicated reference in the catalog ever since, but it hasn’t exactly been the brand’s sportiest option, as one might expect from this ‘Dweller’s deeply fluted bezel, deployed here as a grippy, rotatable surface called the Ring Command. If you’re new to the Sky Dweller, the Ring Command acts as a four-position selector which jumps between each of the crown operations which can be used to set Saros – Rolex’s annual calendar complication. 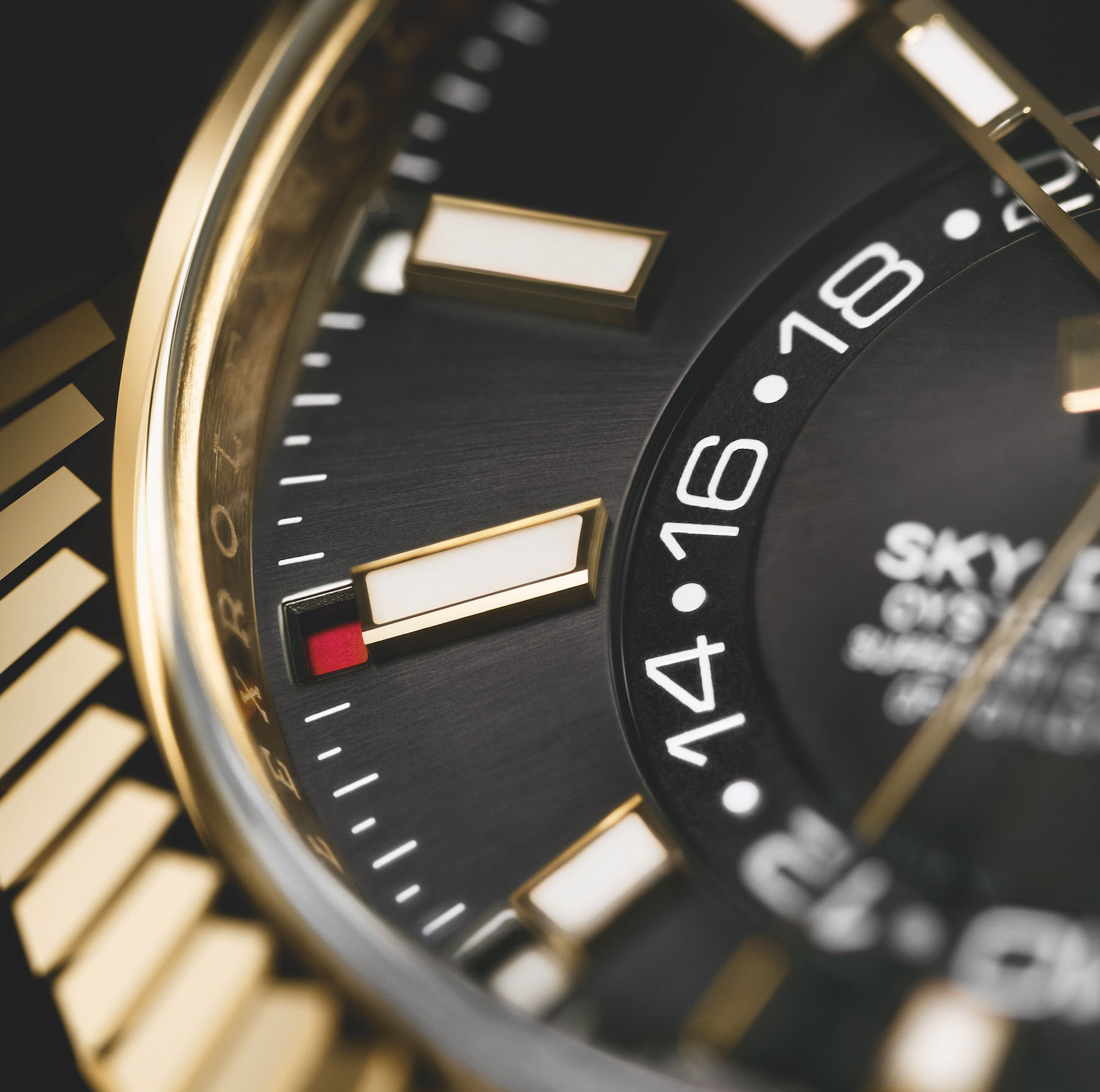 But it’s amazing what a new set of tires will do for the towncar – and in this instance, just as the Oysterflex has done for the Daytona and the Yacht-Master, injected a healthy dose of youthful, sport-luxury fusion into the Sky-Dweller. It’s not just the fresh crossover tone of the watch that’s new though: those who’ve worn the Oysterflex should already be very well familiar with its impressive comfort and on-the-fly adjustability, thanks to the addition of the GlideLock clasp, which has been ported over from Rolex’s bracelet innovations. The Oysterflex gets its name from a pair of flexible, titanium-nickel alloy blades built into the strap, which further preserve the strap’s overall rigidity, enabling it to support taller or heavier watch heads. This is a particularly crucial detail when it comes to the 42mm Sky-Dweller, which measures 14mm thick, and carries a considerable amount of weight on the wrist when cast in precious metal like Everose. 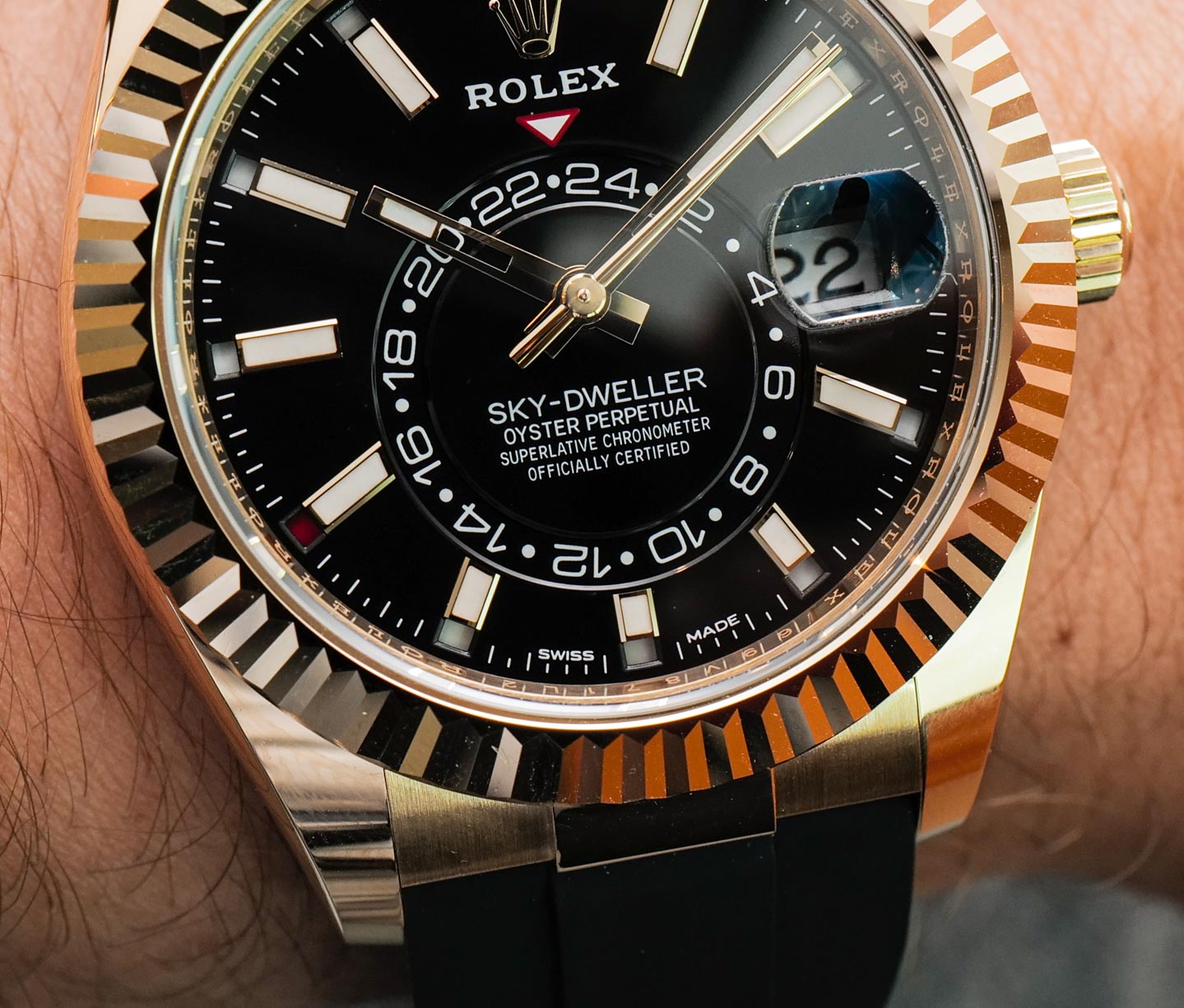 Ever since Hublot made fusion their mission statement, and Audemars Piguet took the concept into the pop culture stratosphere, the marriage of gold and rubber has become much more than a trend or fringe guilty pleasure – it represents a much more youthful approach to the definition of luxury for certain watch fans, and it’s an attitude that Rolex continues to be all too happy to support. And who am I to blame? Personally, I love it – for me it‘s the Everose Yacht-Master on the OysterFlex, but maybe if we’re ever traveling again with such reckless aplomb, I’ll revisit the Sky-Dweller when I’m in need of the ultimate watch for quick trips to Las Vegas or Dubai. 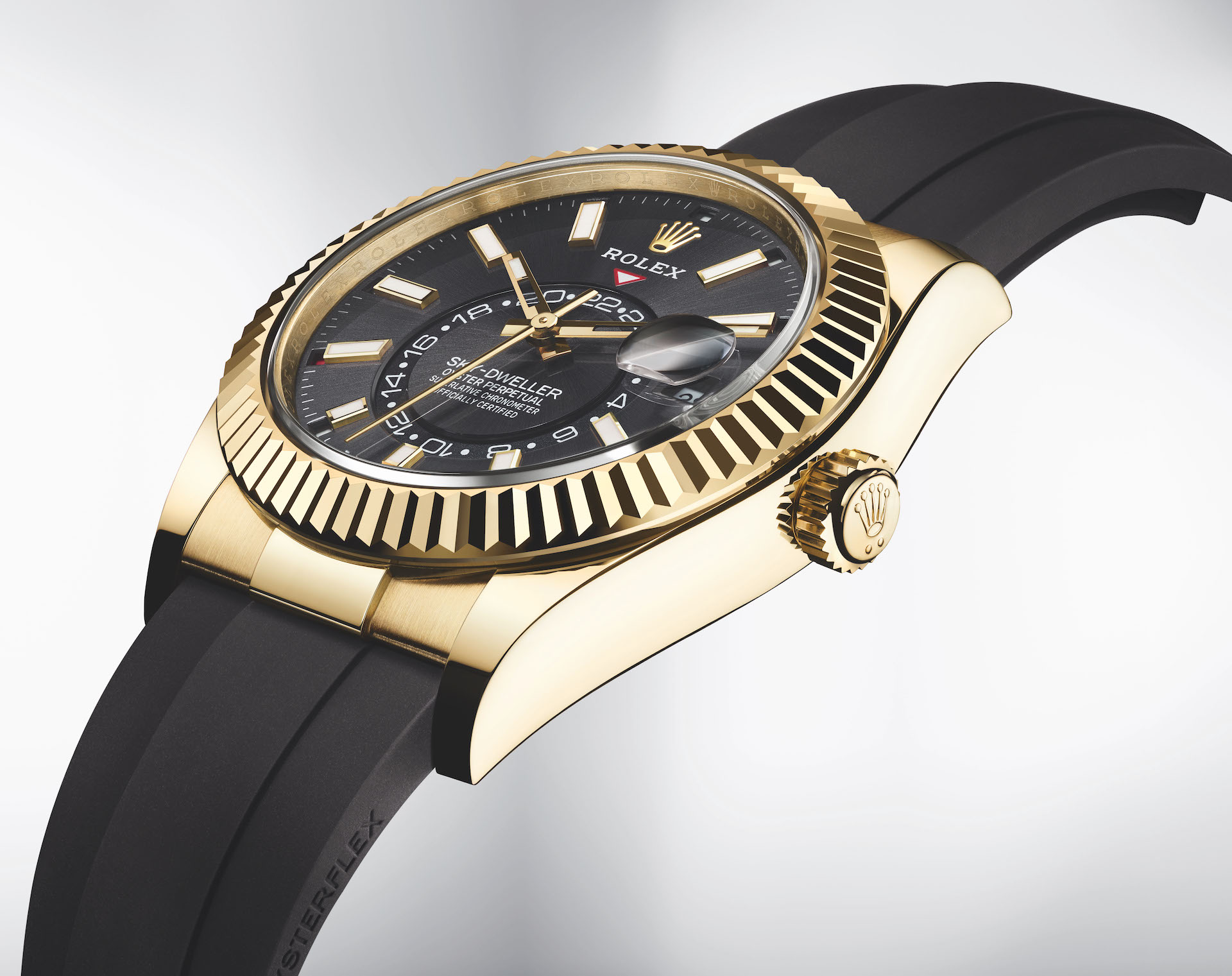 Without the addition of a precious metal bracelet, the price of these new OysterFlex-equipped Sky-Dweller references drops around 15% from their all-metal brethren: down to $40,000 for yellow gold, and $41,000 for Everose (compared to $46k and $49k, respectively). They’re all expected at Rolex retailers immediately, and you can learn more at rolex.com