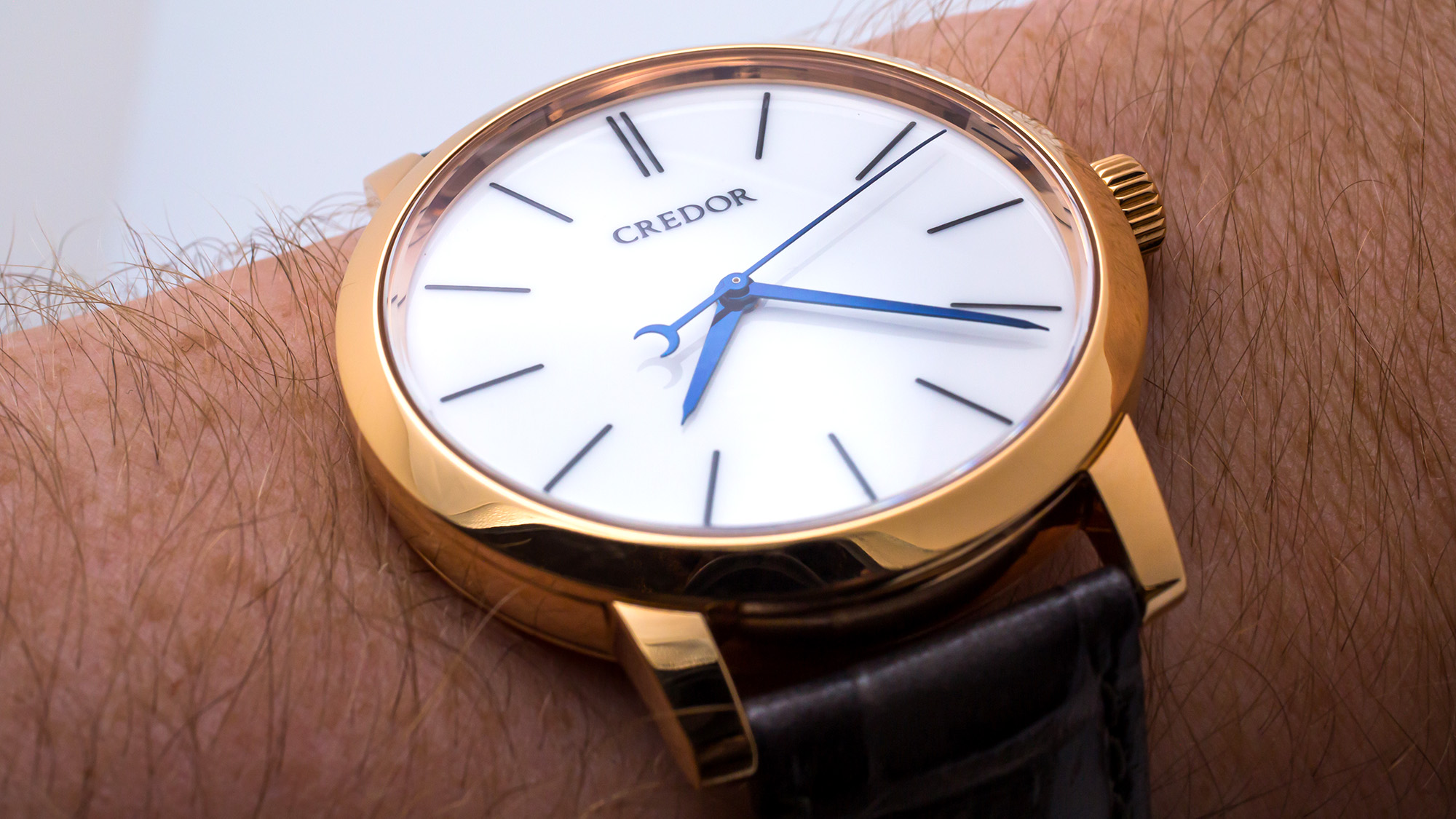 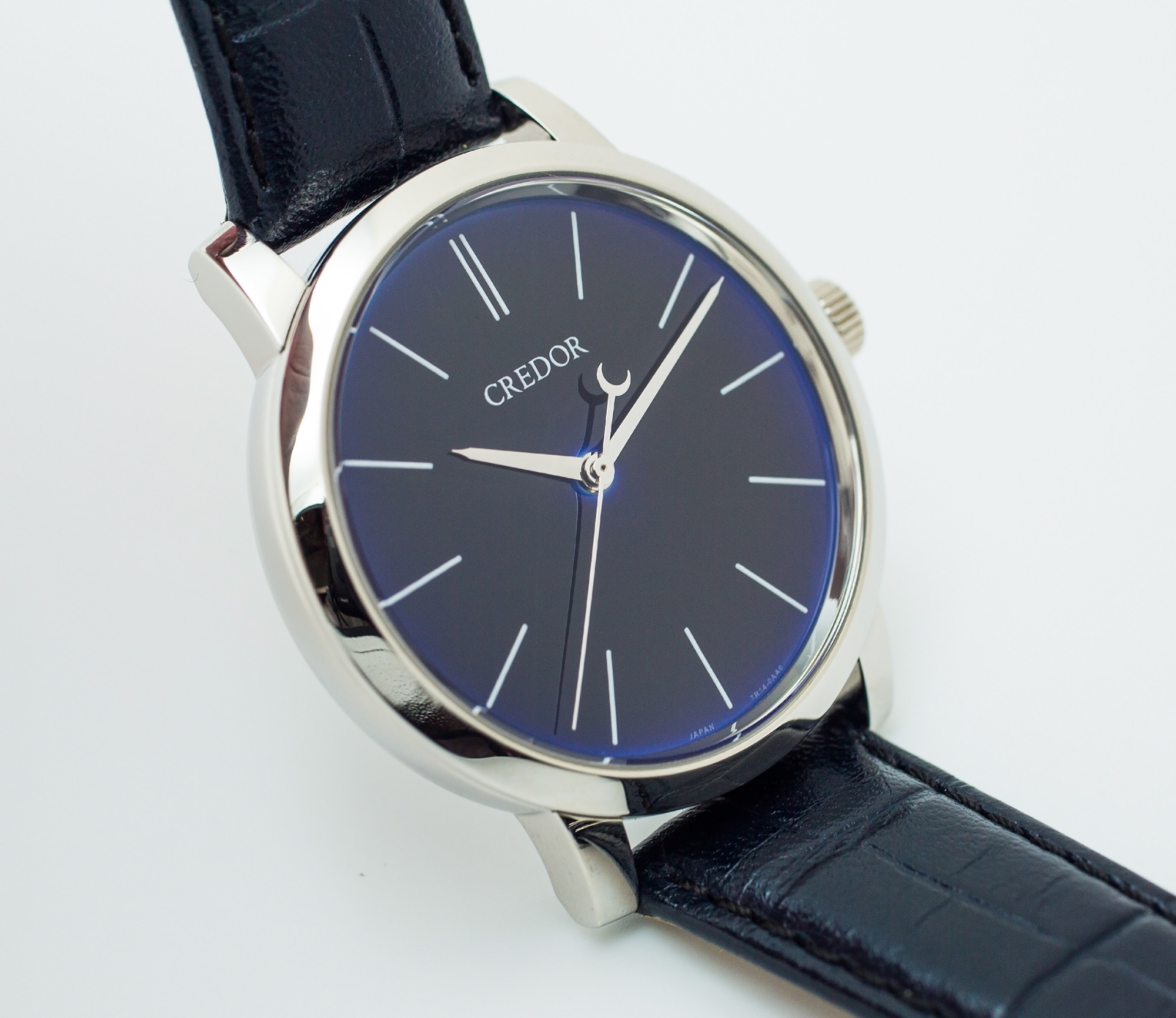 As a ‘90s kid whose childhood consisted largely of anime and “Gran Turismo,” the letters JDM are a rapid-release switch for the dopamine center of my brain. JDM, AKA “Japanese Domestic Market” products, have taken on a hushed, mysterious significance in several enthusiast circles through the years, acting as a brief portal to a world of different cultures, faster, better-equipped cars, and secrets that the Western world was not meant to know. In today’s global economy and social media landscape, JDM products might have lost some of that alluring luster, as product lines are increasingly homogenized for a universal market and buyers can purchase stock from anywhere in the world with the press of a button. There are still glimmers of that old-school JDM magic, however — those few avenues that companies from Seiko to Toyota still jealously guard for their home markets. All of this is to say that, when a Credor model makes its way out of Japan, it reignites some of those mysterious JDM sparks from years gone by. While Grand Seiko has made rapid inroads into Western markets in recent years and become a genuine enthusiast darling, Seiko’s ultra-refined haute horlogerie nameplate still remains strictly Japanese-only, and opportunities to experience these models are few and far between. The Seiko Credor Eichi II is Credor at its most distilled, bringing artful Japanese minimalism and a truly fanatical attention to detail to the classic three-hand dress watch concept while standing as a gem of the JDM watch landscape. 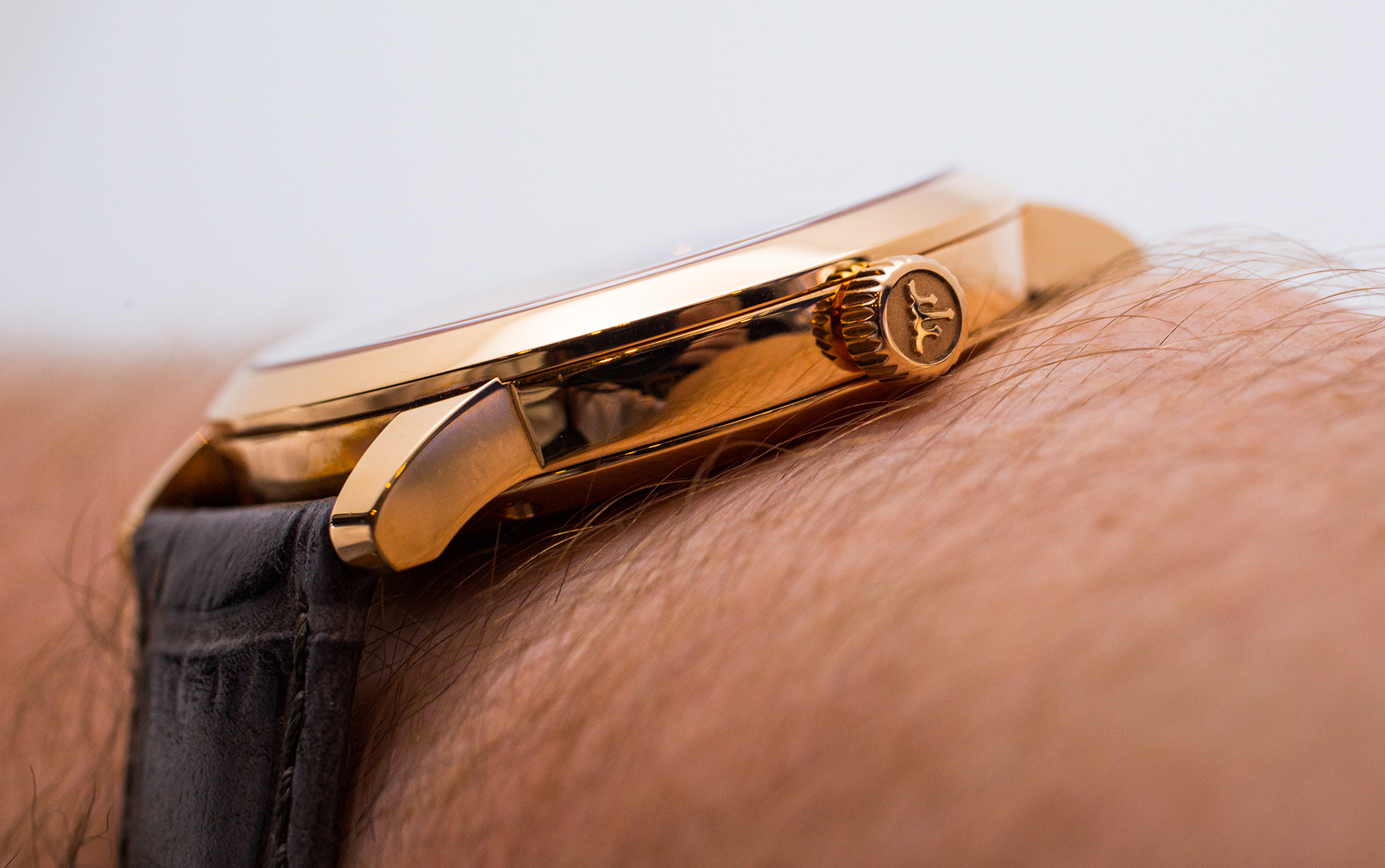 On paper, the 39.5mm-wide by 10.3mm-thick cases of the Seiko Credor Eichi II line couldn’t be simpler. Available in either 950 platinum or cold forged 18k rose gold, this fully Zaratsu polished form pares the traditional dress watch case design to its visual fundamentals. The short, gently tapering lugs are unchamfered, the case sides are vertical and unadorned, and the gently sloping bezel is perfectly smooth. Outside of the deep, mirror-like luster of the case materials themselves, the only real visual ornamentation here is the engraved Credor emblem on the 3 o’clock crown. When working with such a minimal canvas, the fine details become supremely important, and the Eichi II is a prime example of this principle in action. With its slim bezel, the design wears slightly larger than the numbers might suggest, but the relatively slender case profile and its finely proportioned downturned lugs make it an elegant and balanced wearing experience. Naturally, the caseback on both case variants is given over to a broad sapphire display window. Although Seiko does claim the Credor Eichi II is water resistant, it does not offer a specific depth rating, but this is about as far from a sporting timepiece as one can get. 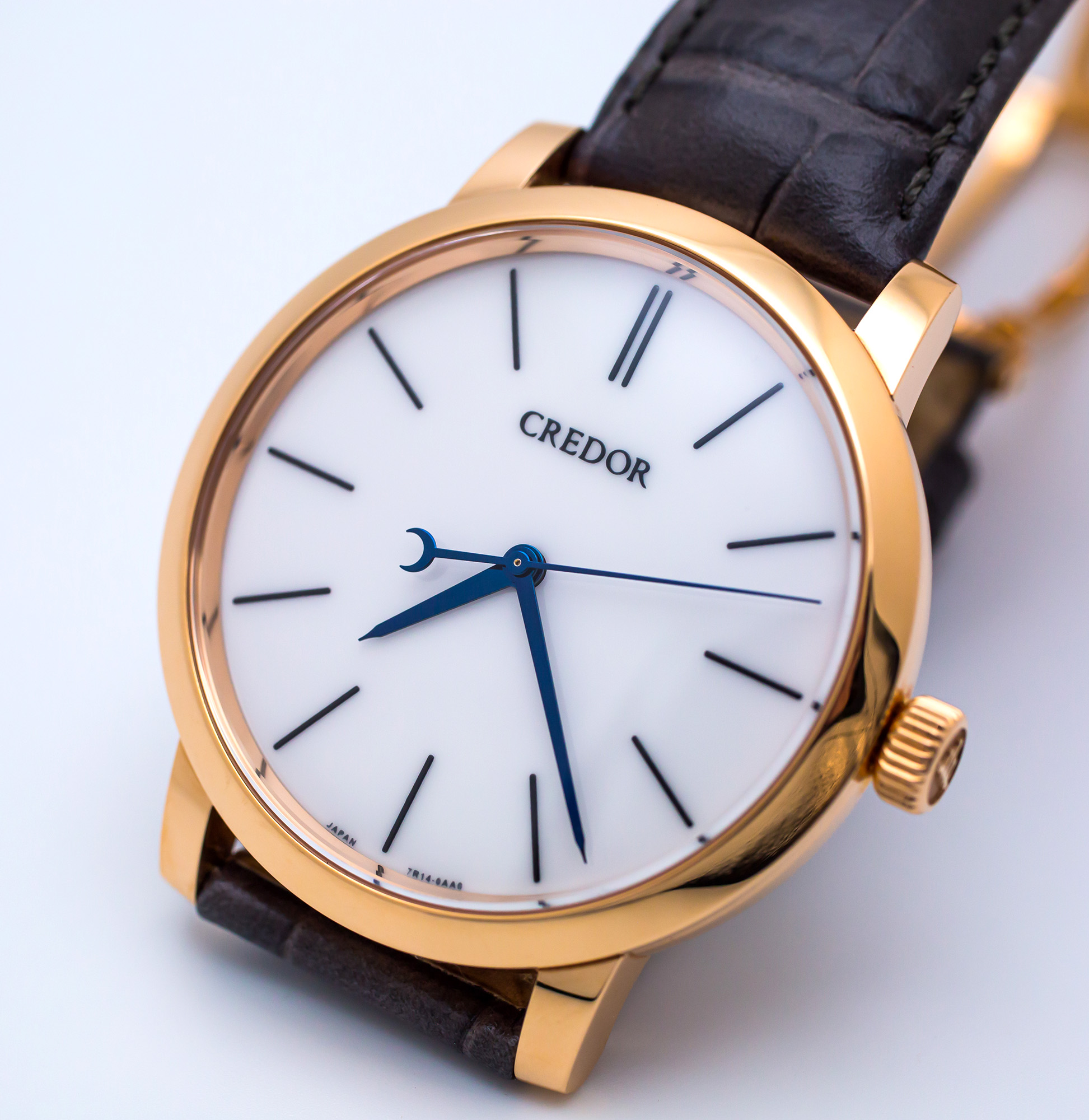 Like the cases, the dials of the Seiko Credor Eichi II series are exercises in refined minimalism, executed with nigh-on fanatical dedication to handcrafting and fine detail. Each dial in the series is made from hand-fired porcelain, applied layer by layer in a painstaking process by the artisans at Seiko’s exclusive Micro Artist Studio. From there, a single master craftsman hand-paints each of the dial’s slender line indices as well as the Credor emblem. Both the platinum and gold-cased models are available with the original variant of this dial, a milky, almost liquid gloss white porcelain surface with a gentle domed effect and miles of visual depth. Both the lettering and indices complement this white hue with an austere midnight blue tone, which blends handsomely with the heat-blued tapering handset. 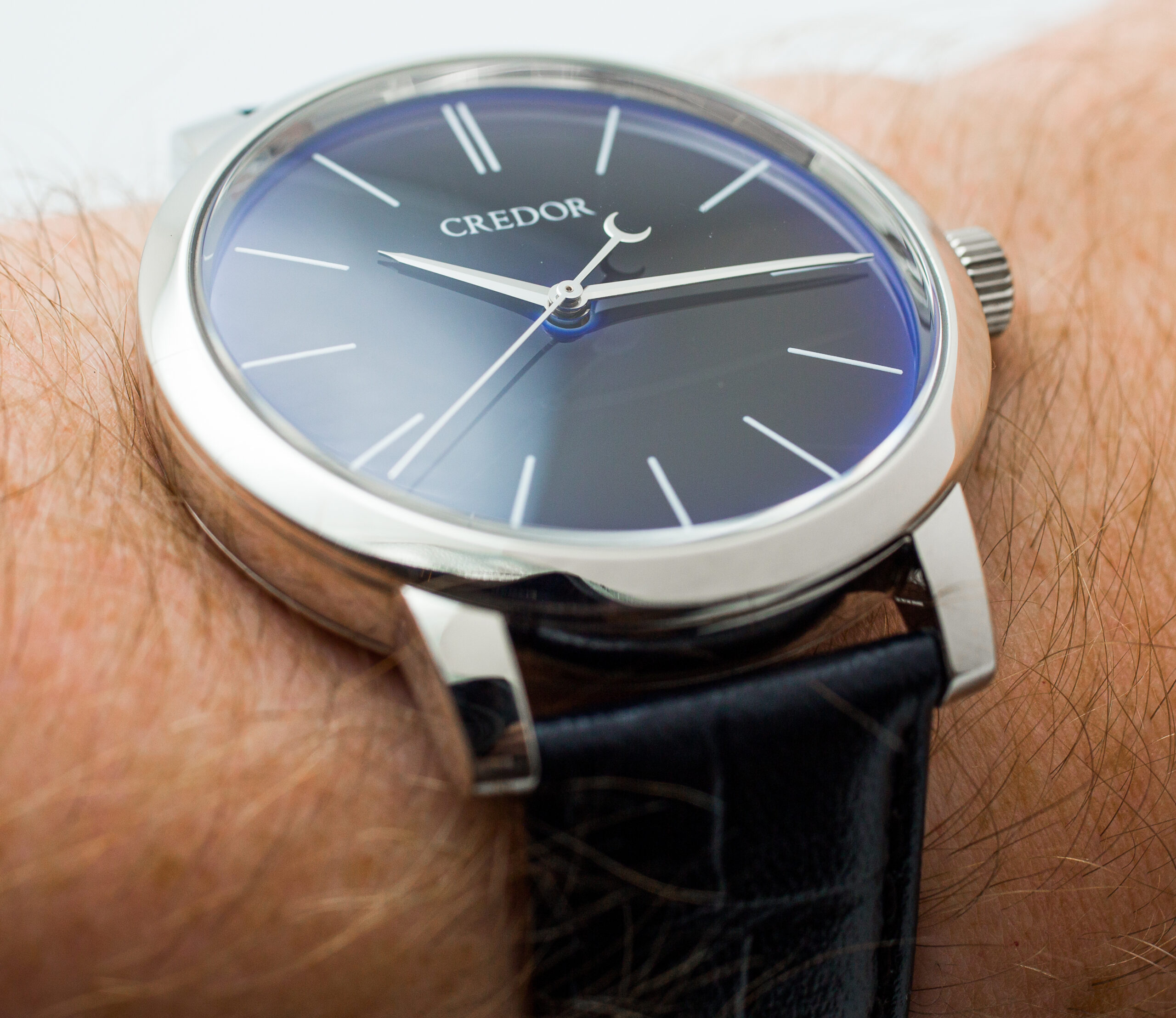 For those who prefer a darker backdrop, Seiko offers the platinum Credor Eichi II with the “Ruri” blue dial option. Named for the Japanese term for lapis lazuli, this deep, nearly black blue hue is built with layer upon layer of translucent blue porcelain glaze, and as such it develops a narrow but noticeable dégradé effect around the center and edge of the dial. As the enamel layers begin to thin in these areas, the dial hue rapidly changes from midnight blue to royal blue, sky blue, and finally a narrow band of bare white that acts as an understated highlight for the overall dial. To contrast with this nuanced colorway, the hand-painted dial text and indices are in brilliant optic white, while the handset is reworked in brightly polished bare metal. 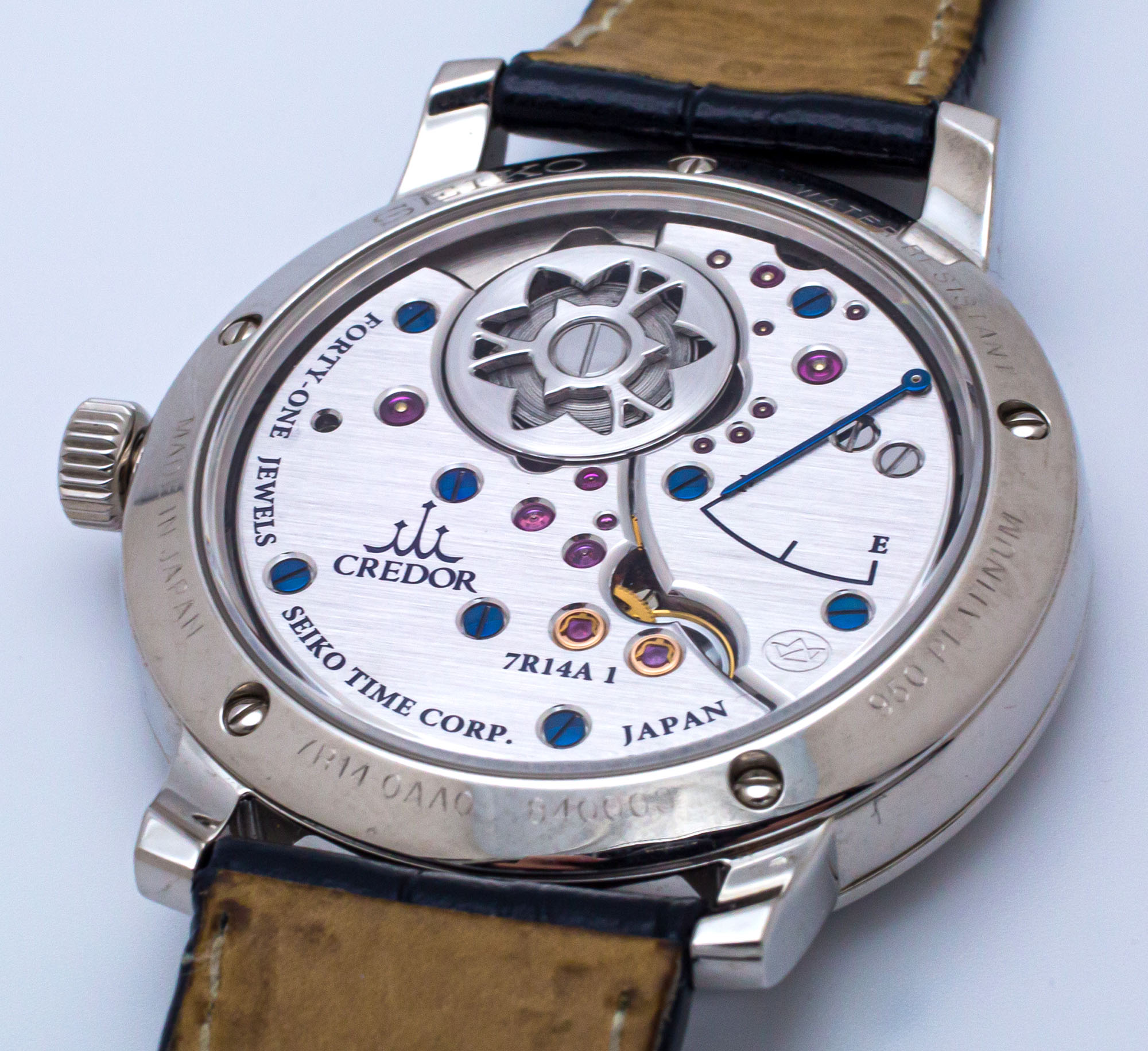 The in-house hand-wound 7R14 Spring Drive movement is where the Credor Eichi II series differentiates itself most clearly from its Swiss and German counterparts. While most Swiss (and, to a lesser extent, German) minimalist haute horlogerie pieces keep their cases and dials austere but festoon the movement with a panoply of finishes, Seiko keeps the finishing of the Eichi II focused and clean. That’s not to say that the finishing isn’t beautiful. Each element, from the horizontal brushing of the three-quarter plates to the blued screws, the hand-polished sinks and anglage, and the floral skeletonized mainspring barrel is exquisitely detailed and extremely high-quality. The overall effect, however, is more tastefully restrained and airy than the shock-and-awe approach to traditional movement finishing seen from brands like Patek Philippe. 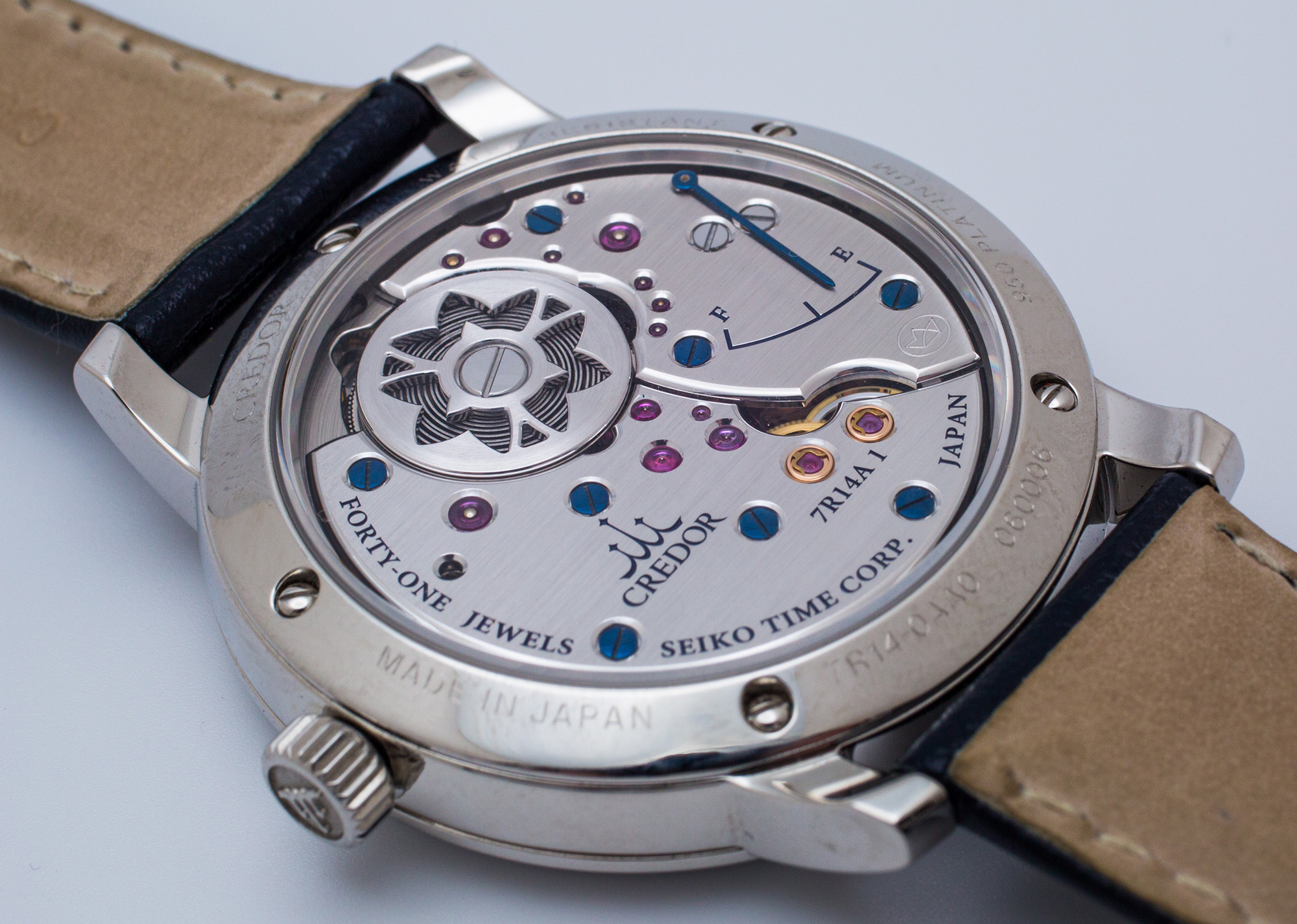 Mechanically, this is also a drastic departure from its European counterparts, with Seiko’s unique Spring Drive regulation technology combining manual winding with quartz regulation and the proprietary glide-wheel escapement to provide accuracy far beyond even the most accurate mechanical movements at a claimed +15/-15 seconds per month. The 7R14 also uses a unique torque reserve system, which reclaims excess energy released by the mainspring to rewind itself and allows the movement to reach a solid 60 hours of power reserve. Seiko completes the Credor Eichi II line with classical alligator leather deployant straps in semi-gloss black, mahogany brown, or midnight blue. 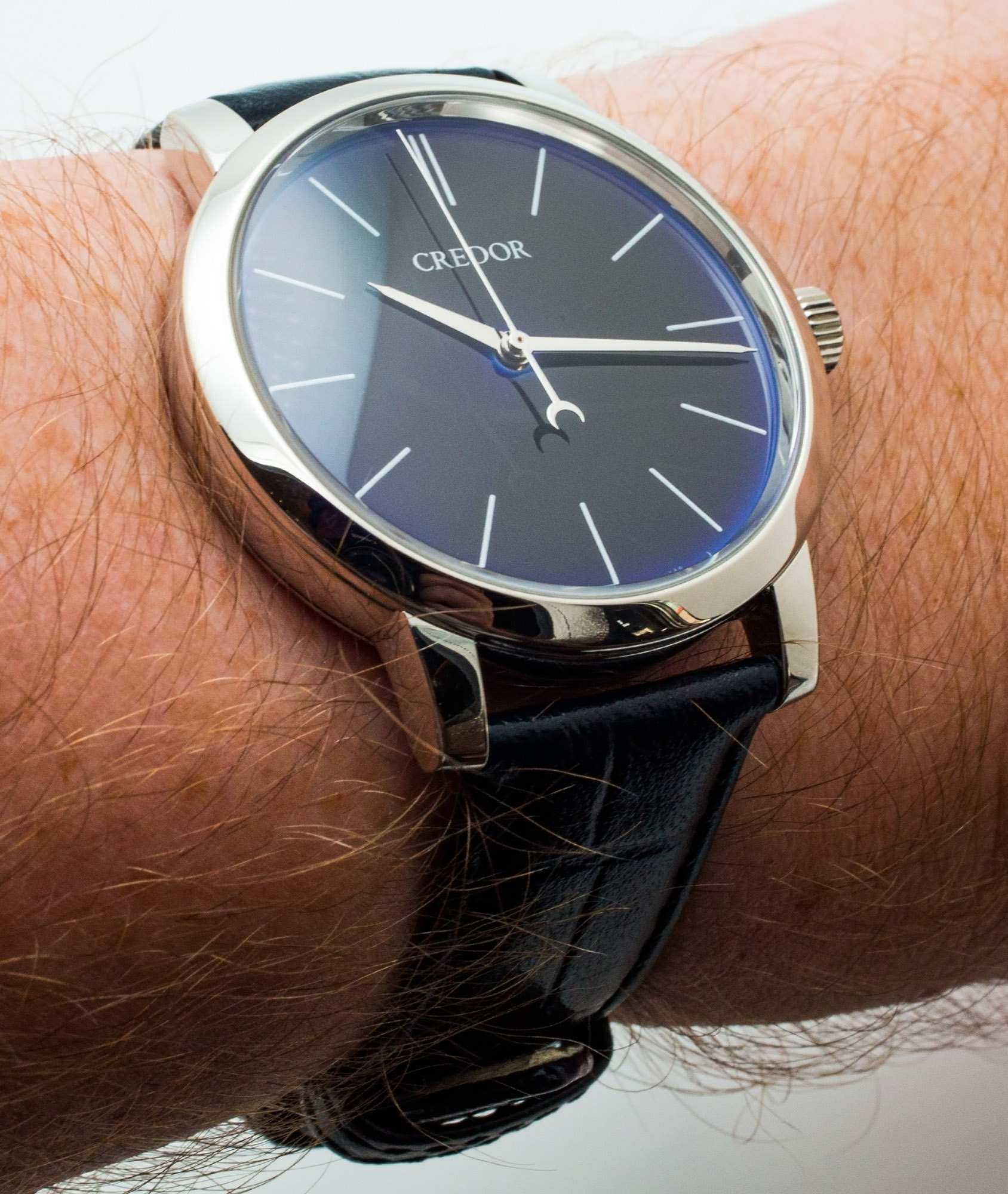 Although the heyday of JDM culture (even in watchmaking) may be behind us, the Seiko Credor Eichi II line proves that some of Japan’s greatest horological treasures are still reserved for its home market. Although not officially on sale outside of Japan, all three variants of the Seiko Credor Eichi II are available now through Credor authorized dealers. MSRP for the Credor Eichi II line stands at $42,000 USD for rose gold models, and $57,000 USD for platinum models as of press time. For more details, please visit Credor’s website.