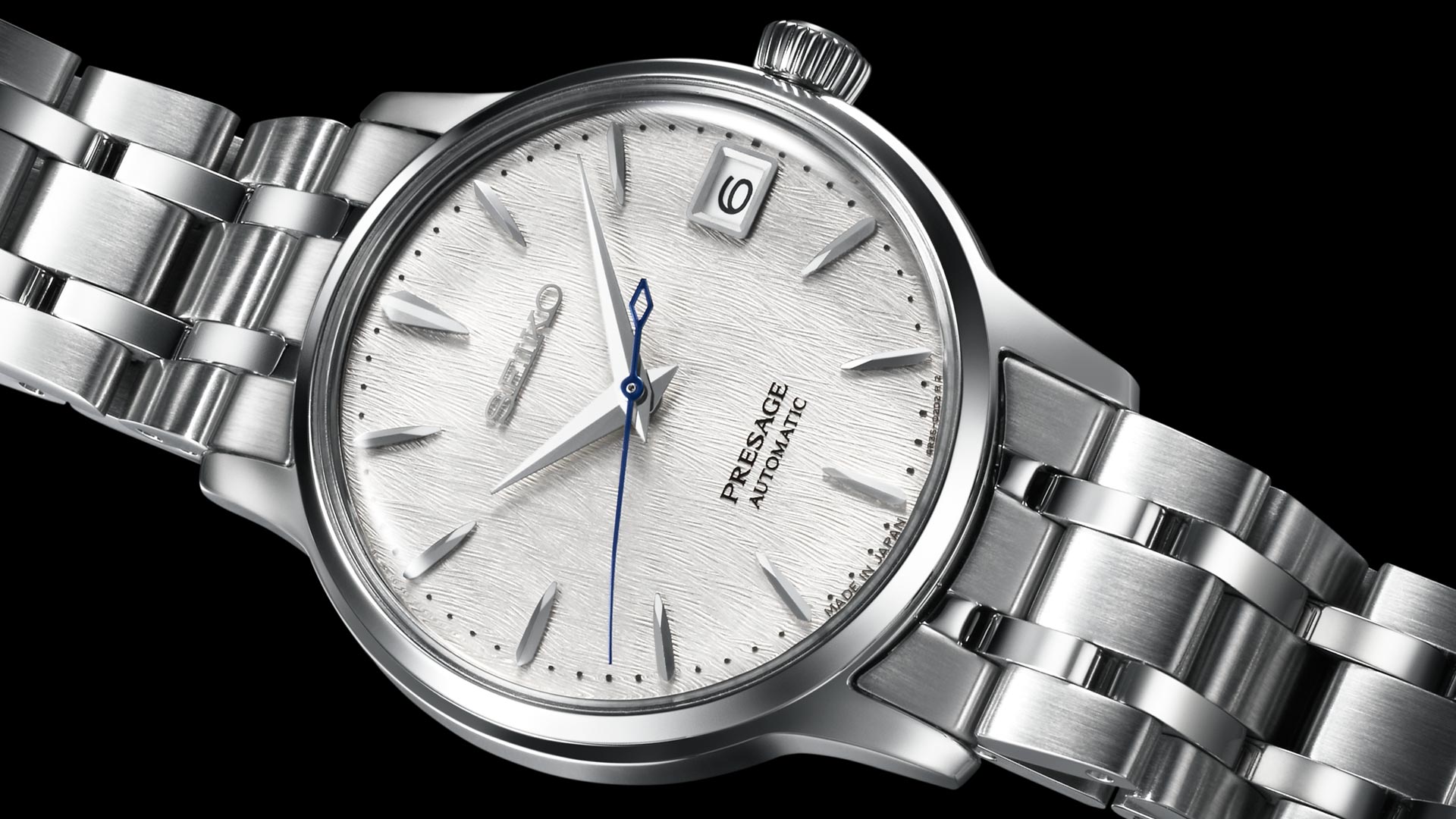 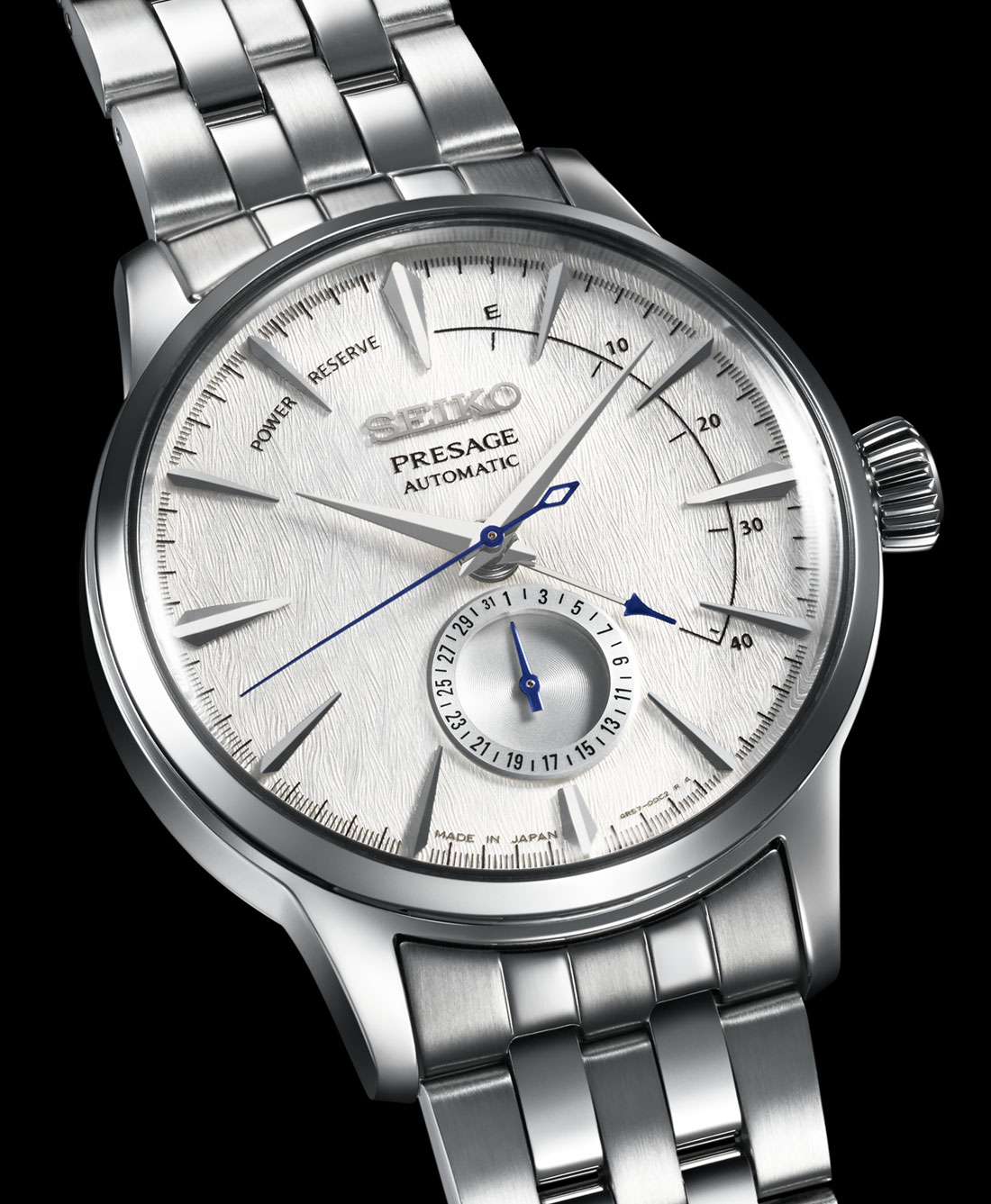 Today, another limited edition Presage joins Seiko‘s popular “Cocktail Time” collection of classically styled watches in three versions, and it is probably my favorite modern iteration in the line yet. As with previous Cocktail Time watches, the focus of the Seiko Presage “Fuyugeshiki” Cocktail Time is on the dial execution, here with a textured white dial meant to look a bit snowy. Also of interest is what I believe is the first dedicated women’s watch in the Cocktail Time family. 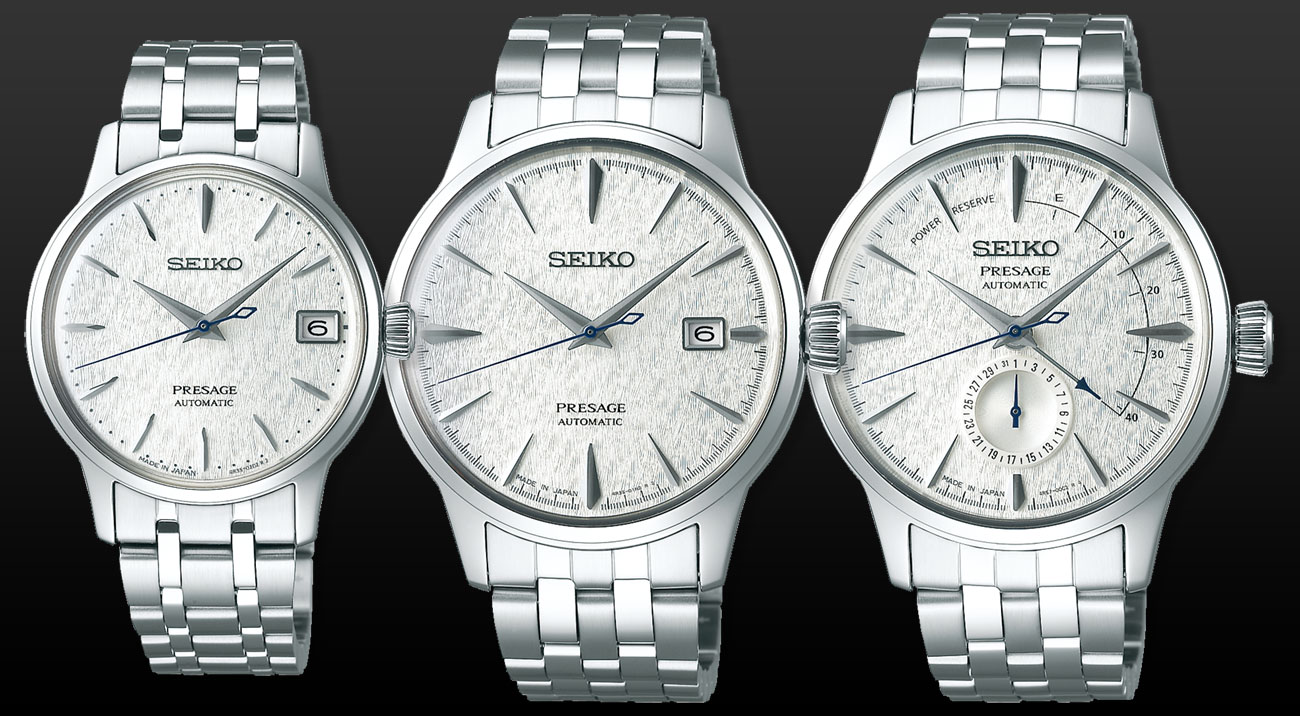 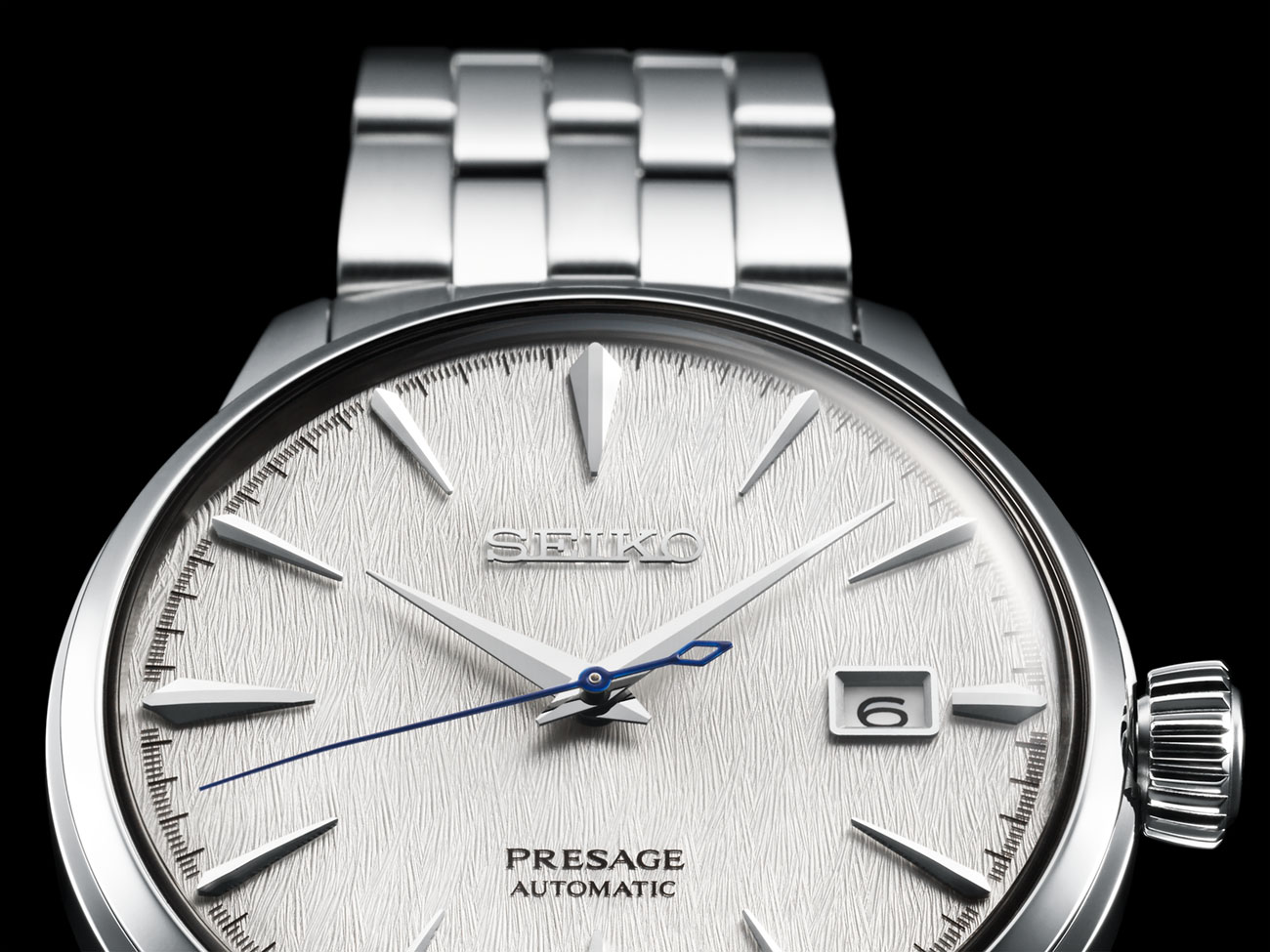 The textured dial is where the “design inspiration” is expressed. In this case, it is fuyugeshiki (冬景色), which would sound nice translated as something like “snowscape,” though literally, it is just “winter scenery.” That is actually the name given to an original cocktail found at the Tokyo bar that Seiko has chosen to work with for their current Cocktail Time watches, and the watch is named after the drink. It is hard to imagine that this particular dial execution wasn’t influenced by the great popularity of the Grand Seiko “Snowflake” that has gone on to influence other models as well, such as the Seiko Presage SJE073 which I am in love with and will own someday. 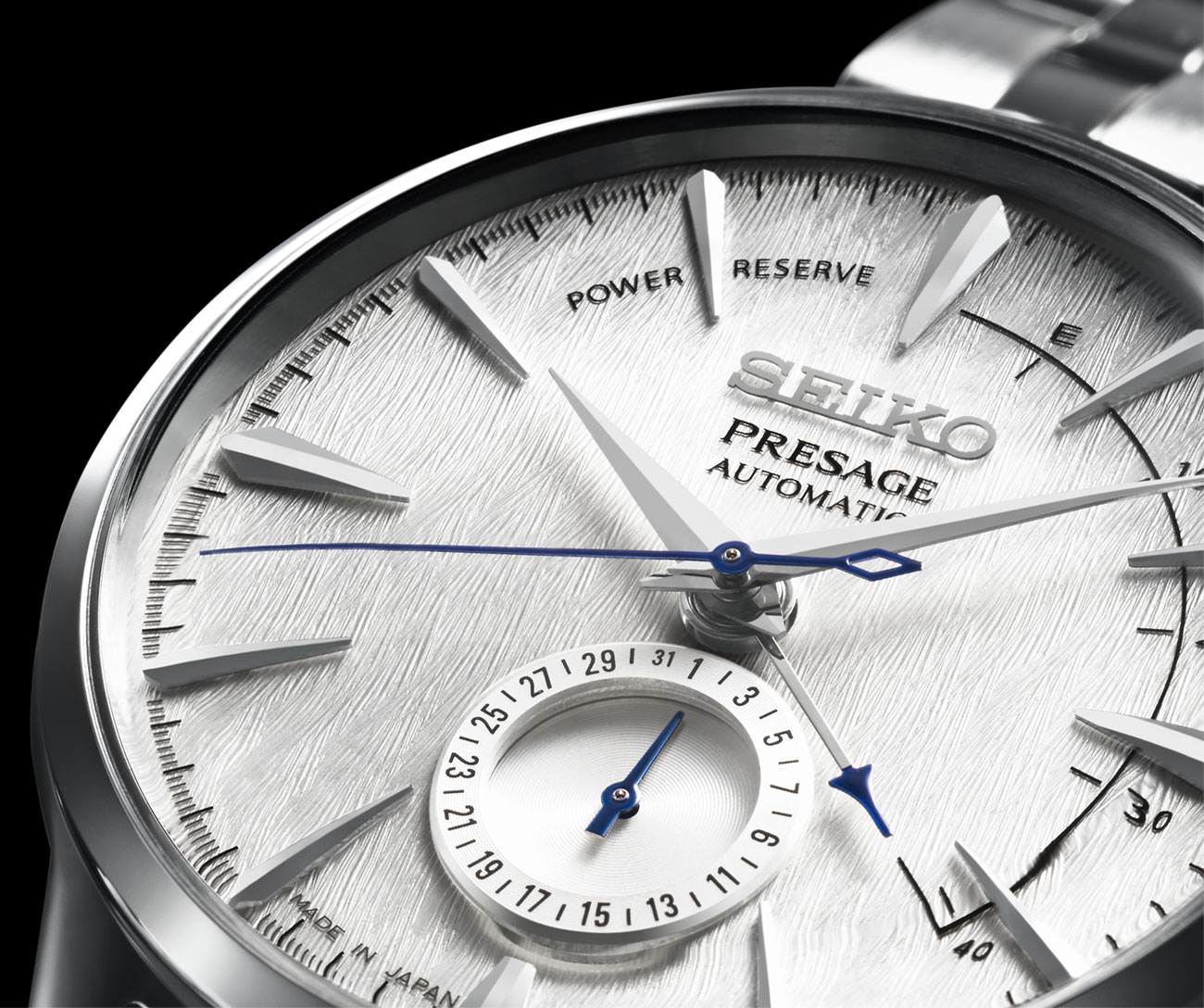 The new Seiko Presage “Fuyugeshiki” Cocktail Time watches come in three versions, two sized for men and a smaller women’s model. The two men’s models take the form of previous Cocktail Time SSA and SRPC watches. The SRPC offers simple three-hand time telling with central seconds and a date window at 3 o’clock, while the SSA indicates the date via a subdial at 6 o’clock and has a power reserve indicator with a centrally mounted hand indicating a track between 12 and 4 o’clock on the dial. These are both 40.5mm wide and 47.5mm lug to lug, but the power reserve indicator makes the SSA385J1 slightly thicker at 14.4mm than the SRPC97J1, which is 11.8mm thick. The cases are in steel with a water resistance of 50m. 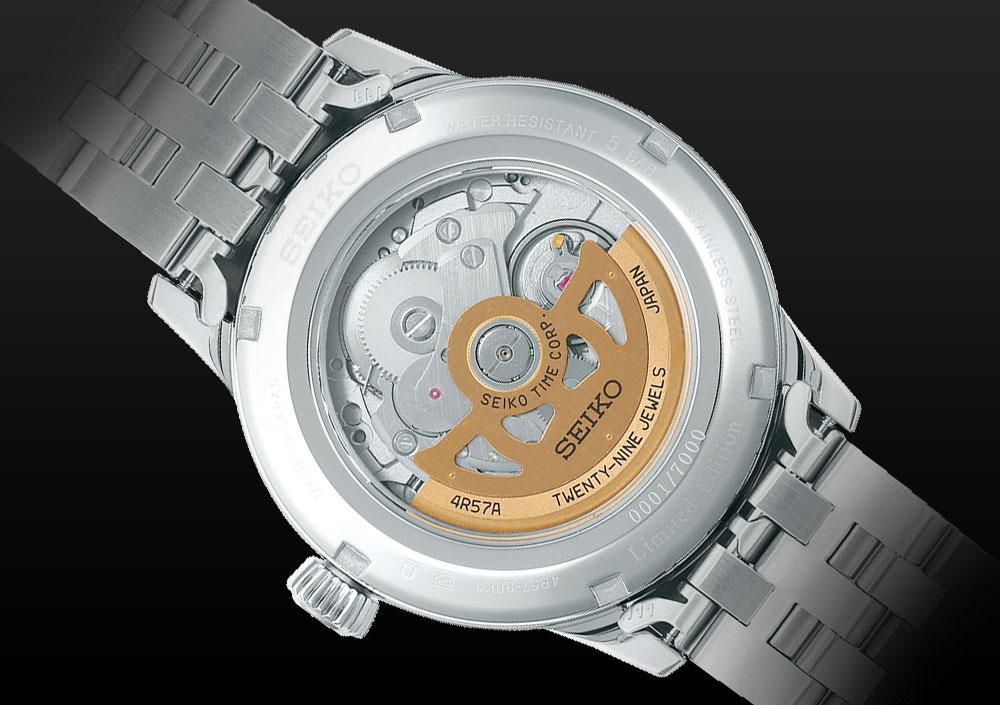 Inside the three-hand SRPC97J1 is the 4R35 automatic movement and the 4R57 is a version of it with a power reserve indicator. Both movements get around 41 hours of power reserve when fully wound, operate at 3Hz, offer hand-winding and hacking, and promise an accuracy of +45 to -35 seconds per day (though Seiko is known to underestimate its accuracy claims). The movement is visible through a display caseback, and like some past Cocktail Time watches, the Seiko Presage “Fuyugeshiki” has a gold-colored rotor. 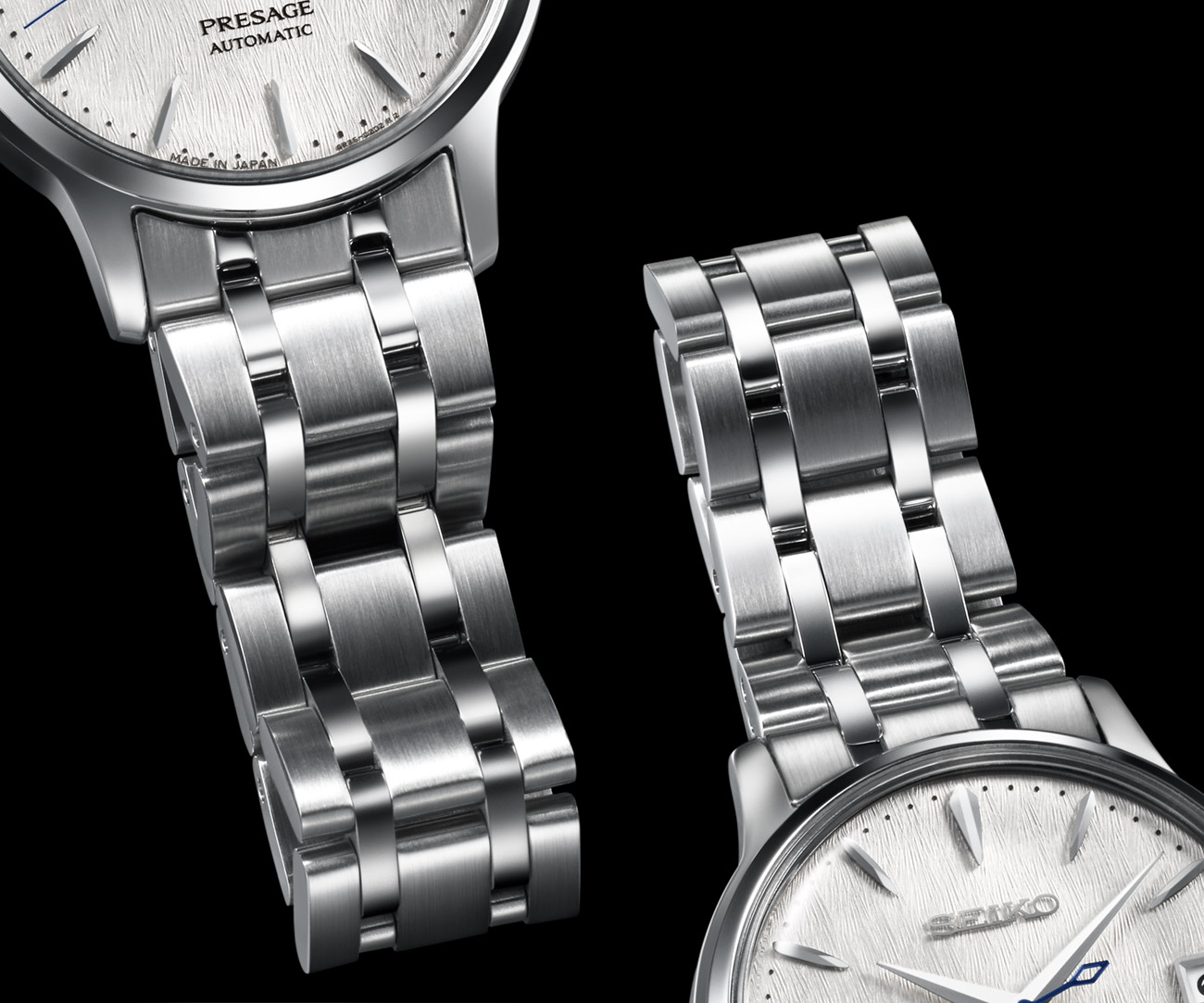 The women’s Seiko Presage “Fuyugeshiki” Cocktail Time SRP843J1, on the other hand, shares the same 4R35 and other specifications with the men’s SRPC97J1, but it measures 33.8mm wide, 40.4mm lug to lug, and 11.3mm thick. The men’s version has a date window that cuts off the 3 o’clock index, whereas on the women’s version the date window just replaces it. So the proportions will be a little different. All versions have a raised “box-shaped” hardlex crystal and full steel bracelets. I will assume that the clasp is the same as on previous such Cocktail Time watches, and Seiko hasn’t provided images or info on it, but if it were something like the new Seiko clasp that has found its way onto watches like the SJE073 linked to above or the recent Astron GPS Solar Dual-Time 5X53, that would be a major selling point, for me. Let’s hope it’s on all Seiko bracelets soon. 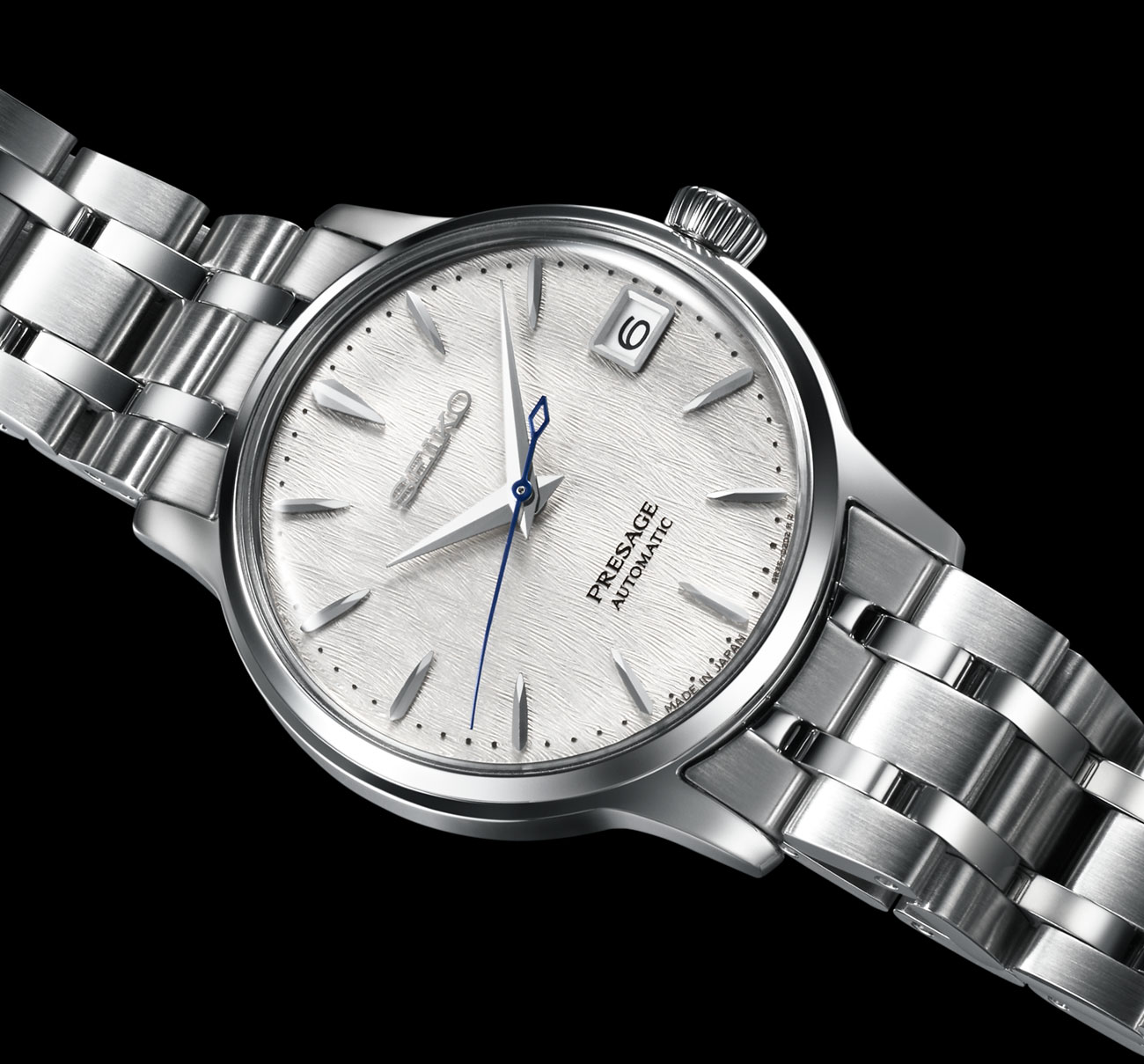 A nicely done textured dial such as that of the Fuyugeshiki is great for legibility and adds overall interest, so I like that Seiko regularly plays around with such themes. The Seiko Presage “Fuyugeshiki” Cocktail Time watches are limited to 7,000 pieces each for the men’s models and 5,000 pieces for the women’s model (not that that’s not very limited). For reference (as it were), the models known as SSA385J1, SRPC97J1, and SRP843J1 in the USA are SARY105, SARY103, and SRRY033, respectively, for Japan. The US price for the Seiko Presage “Fuyugeshiki” Cocktail Time SSA385J1 with power reserve indicator is $610, the three-hand SRPC97J1 is $470, and the women’s SRP843J1 is $450. Learn more at seikowatches.com.