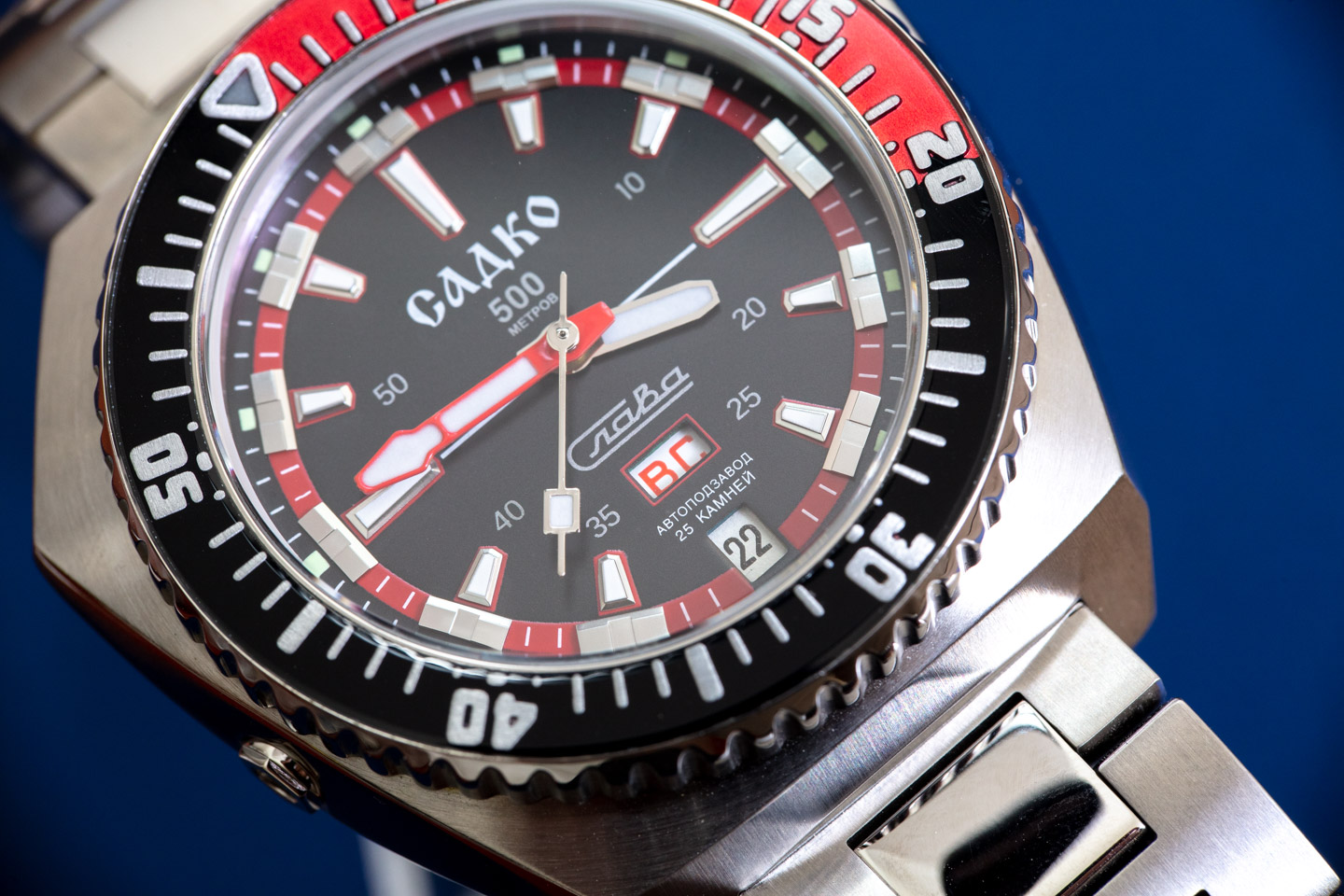 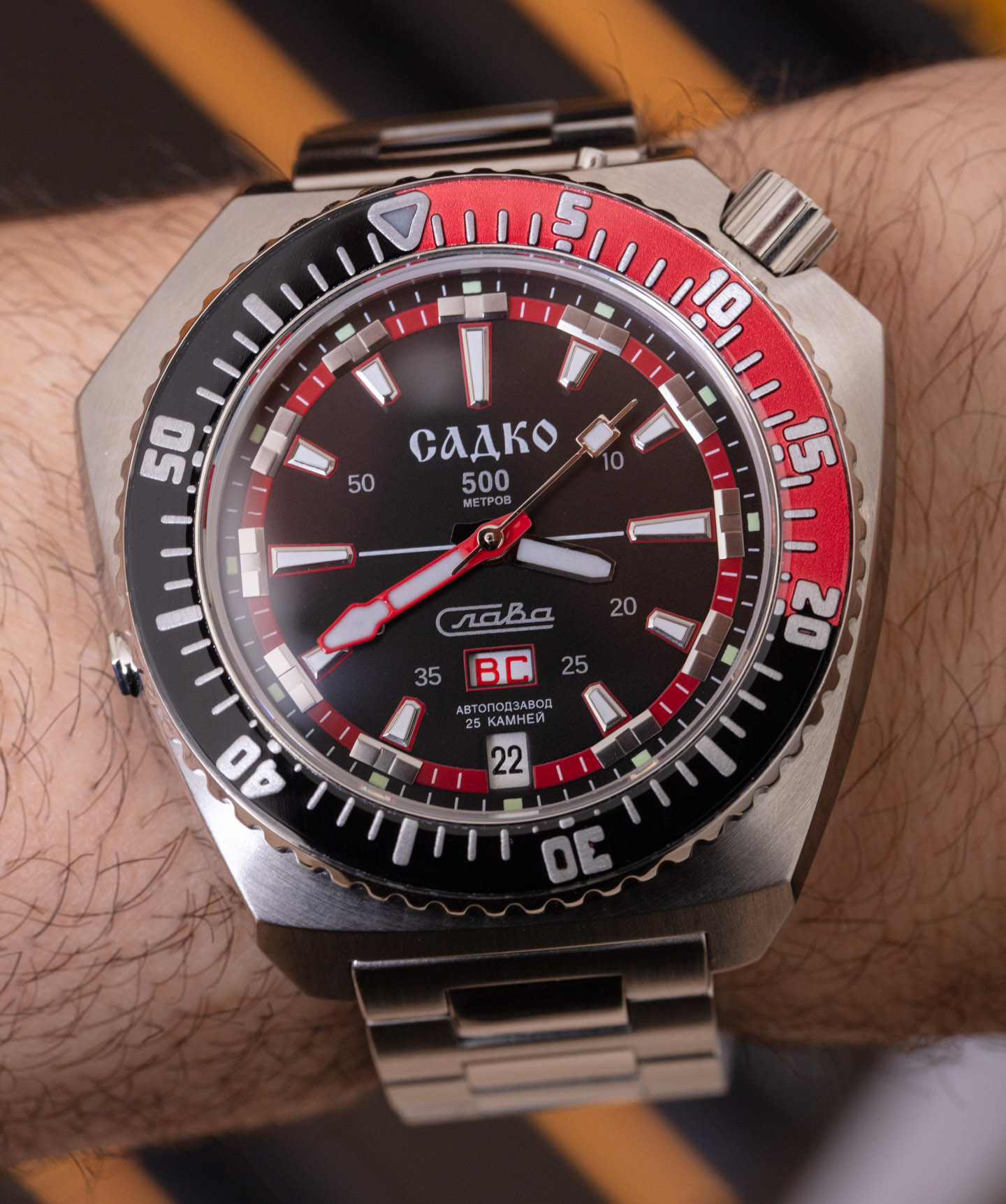 In the 1980s, a major Russian watchmaker known as Slava produced a distinctive-looking diver’s watch known as the Sadko, themed after a character in Russian mythology. The original watches are so rare that fewer than half-dozen are known to still exist — and they are a grail watch for some people in the avid community that likes to collect USSR-made timepieces (especially Soviet military and professional watches like this). Some of the original USSR watchmakers are still operating in Russia today, and Moscow-based Slava is among them. Their watches don’t often make it outside of Russian or Europe, but that doesn’t mean places such as the United States don’t have their hardcore Soviet watch fanatics.

I’ve spent time in places such as Moscow, Russia as well as Glashütte, Germany — both places where Soviet-era wristwatches were made. The Saxon town of Germany’s most high-end watches is infrequently recalled to be in the former East Germany, which was a Communist state until German reunification in the late 1980s. A lot of German and Swiss watchmaking know-how was actually absorbed into the Russian watchmaking machine, but Russian movements (and watches) have an amazing personality all their own. 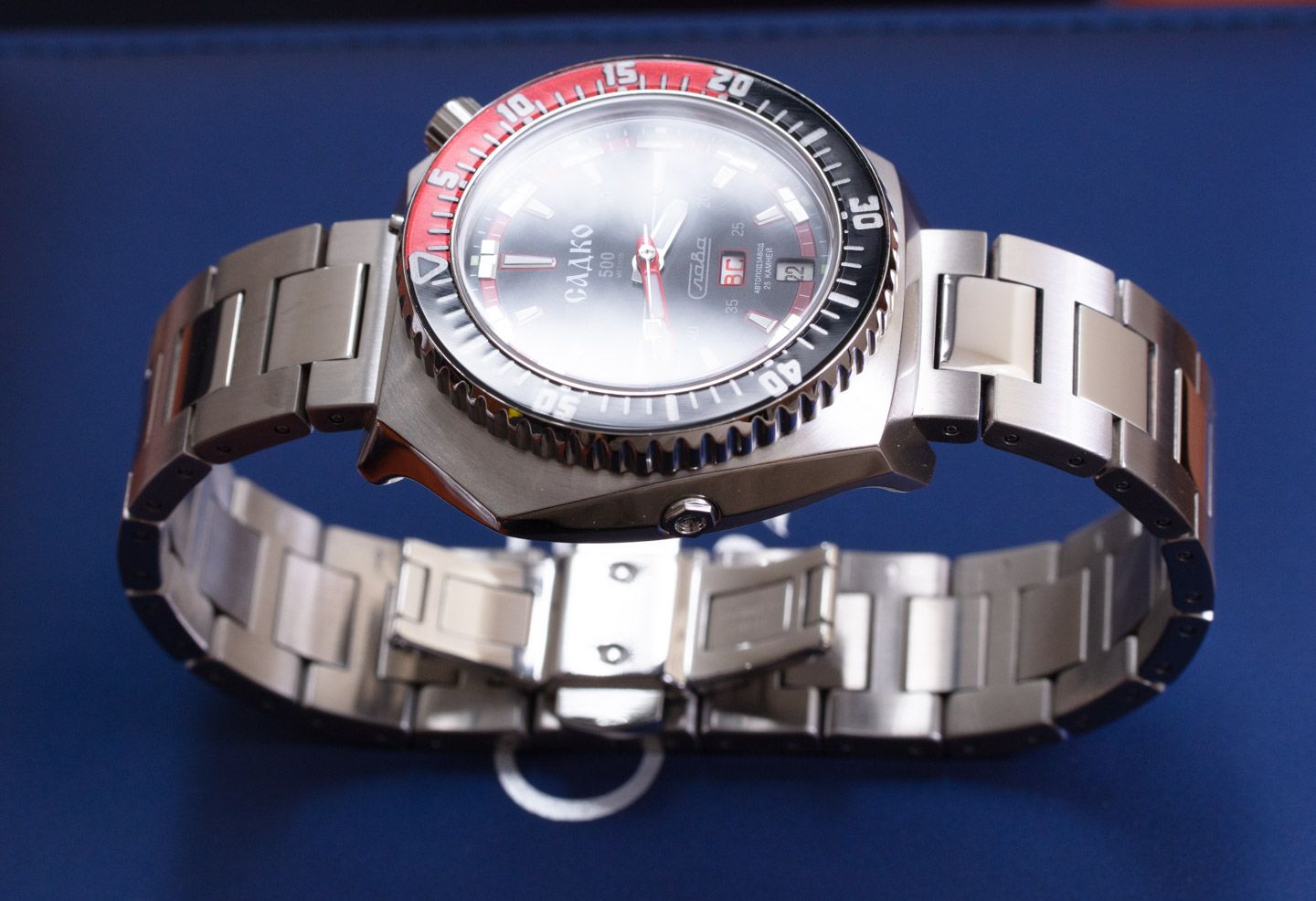 Unlike most things manufactured in Soviet society, USSR watches often delighted with originality and sparkled with character. If there is one realm of life in which showing off was appropriate in the forced humility of communist times, it was apparently in one’s wristwatch. Or at least those people who happened to be in interesting roles, such as divers, got to play with neat stuff like the original Slava Sadko. The Slava watch company is still around today, and in addition to making wristwatches, it also makes some movements. Among them is the historic caliber Slava 2427 which is what you find inside this re-issue Sadko reference 5000167/100-2427.

The story of the original watch is hard to glean. My belief is that the 1980s Sadko watches were made as a prototype for a new collection that was intended to be made in larger volumes (but this apparently never happened). Even though this is a diver’s-style watch, it was anything but a pure tool watch. In fact, the Sadko is rather modern in its combination of producing a watch to celebrate a theme as well as to be used for functional wristwatch purposes. The new Sadko watch is more durable than the original with 500 meters of water resistance (versus 200) and has a better (of course) case construction. The original did seem to have a tapered bracelet, which would have been neat on the model. Let’s talk a bit about the timepiece itself and then return to the Sadko story. 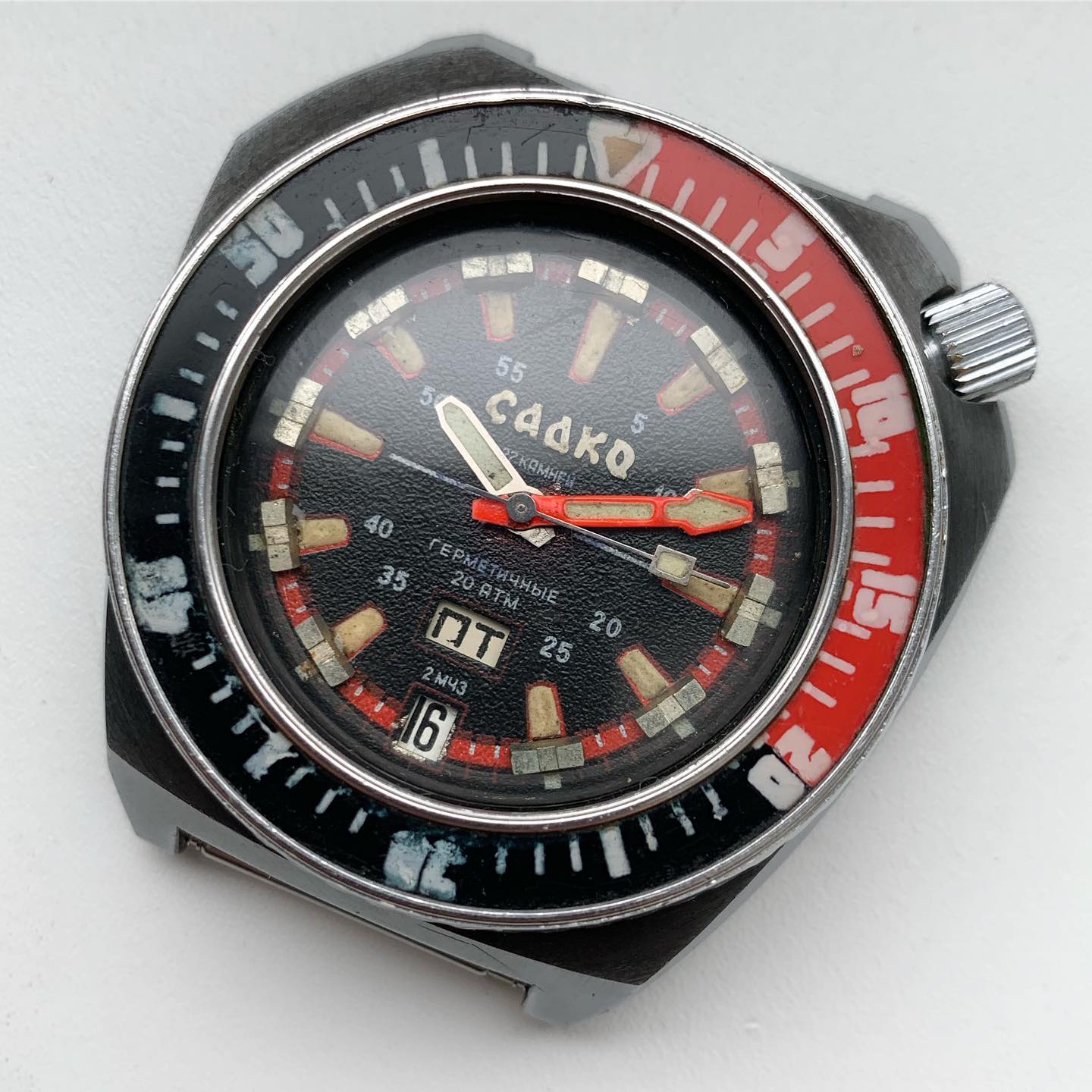 There are a number of interesting quirks about this sports timepiece that make it uniquely desirable for today’s dive watch fans. The Slava Sadko isn’t for everyone, but its areas of distinction do give this rarified vintage-redo sports watch a large helping of character that many other timepieces would die for. The steel case is 45mm-wide and 15mm-thick with a uni-directional rotating timing bezel. Over the dial is a flat AR-coated sapphire crystal. The case is quite wearable with only 47mm as the lug-to-lug distance. The case sits high, but the sloped lugs and bubble-style caseback make for a snug fit on the wrist. Projecting outward from the case is the watch crown at about 2 o’clock, a date corrector at about 1 o’clock, and an automatic helium release valve at about 9 o’clock.

The bracelet is nice enough but wasn’t engineered specially for this case and dial design. So, its visual match is approximate. Like I said, the original 1980s Sadko watch came with a tapering bracelet. That might have been a bit more interesting than this straight bracelet. The bracelet design itself uses brushed “H-style” lugs with polished “chicklet” lugs between them. It has a butterfly-style locking deployany clasp. In addition to not having a more precise ability to size the bracelet, my principal complaint about it is that the fact that the tightly connected pieces of the metal can have a tendency to pull arm hair. The neat case design and dial along with the character delivered Cyrillic characters might suggest that this watch will look most hip on a NATO-style strap. 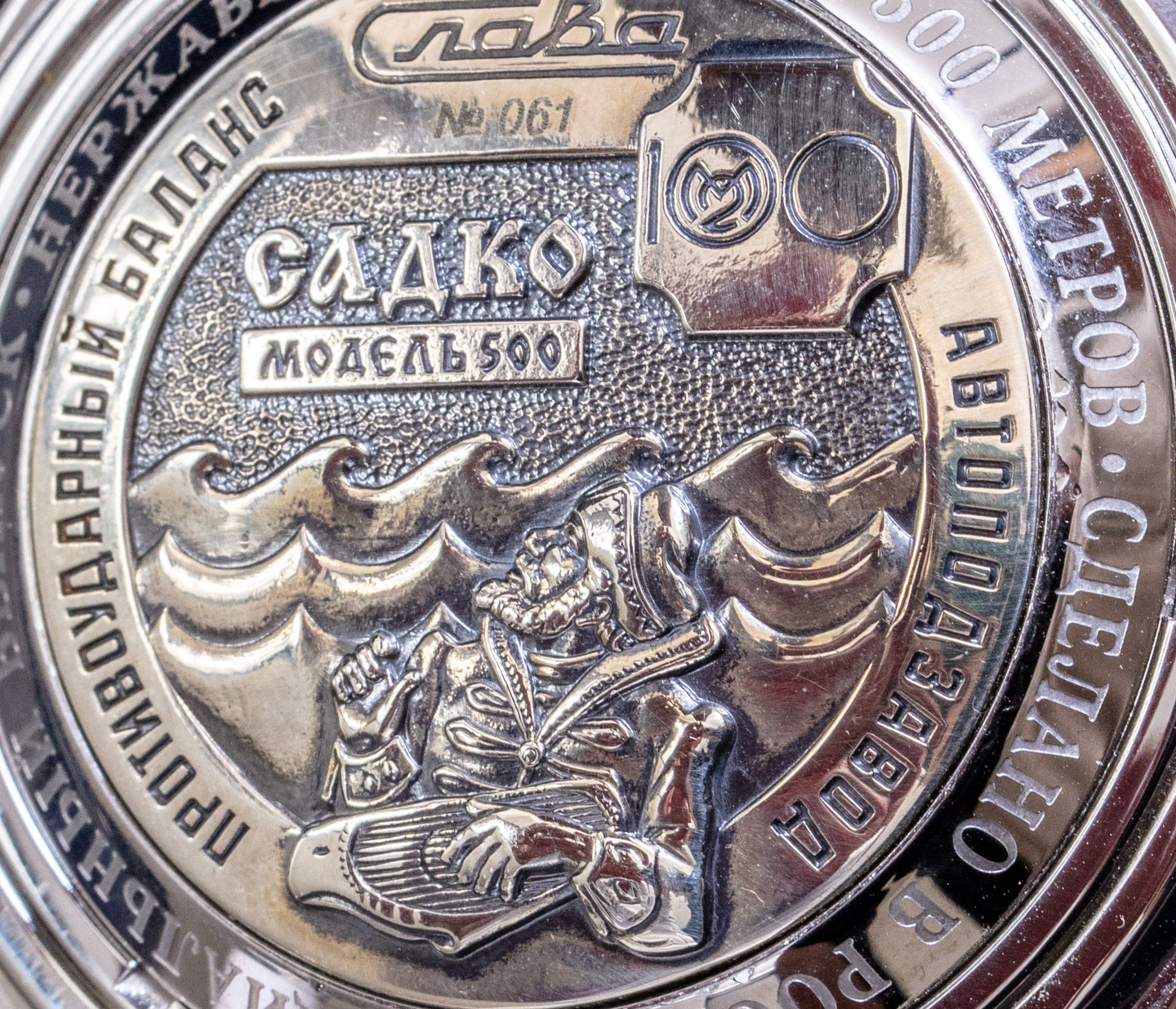 Overall, the dial of the Sadko fits very well with the era which very much still liked colorful sports watches and big, easy-to-read hand and hour markers. For its era, the original Sadko dial is rare for a few reasons. First of all, it has a lot going on but still manages to be legible and instrument-like. Not counting the bezel, there are no fewer than three rings of hour markers, a lot of applied elements, and a focus on having a symmetrical design. This includes the vertically in-line placement of the day of the week window right over the date window above the 6 o’clock position on the dial. You get the impression that whoever designed the original Sadko dials both had a lot of experience with watches and was also having fun at the same time with this one. The modern Sadko watches (Slava produces both this original black and red natural steel 5000167/100-2427 model as well as a few other style references) do their best to recapture the essence of the 1980s original. As is common, the modern versions have dials with a bit more polished elements than the originals did, but this is mostly related to how most watch hands are physically manufactured today. 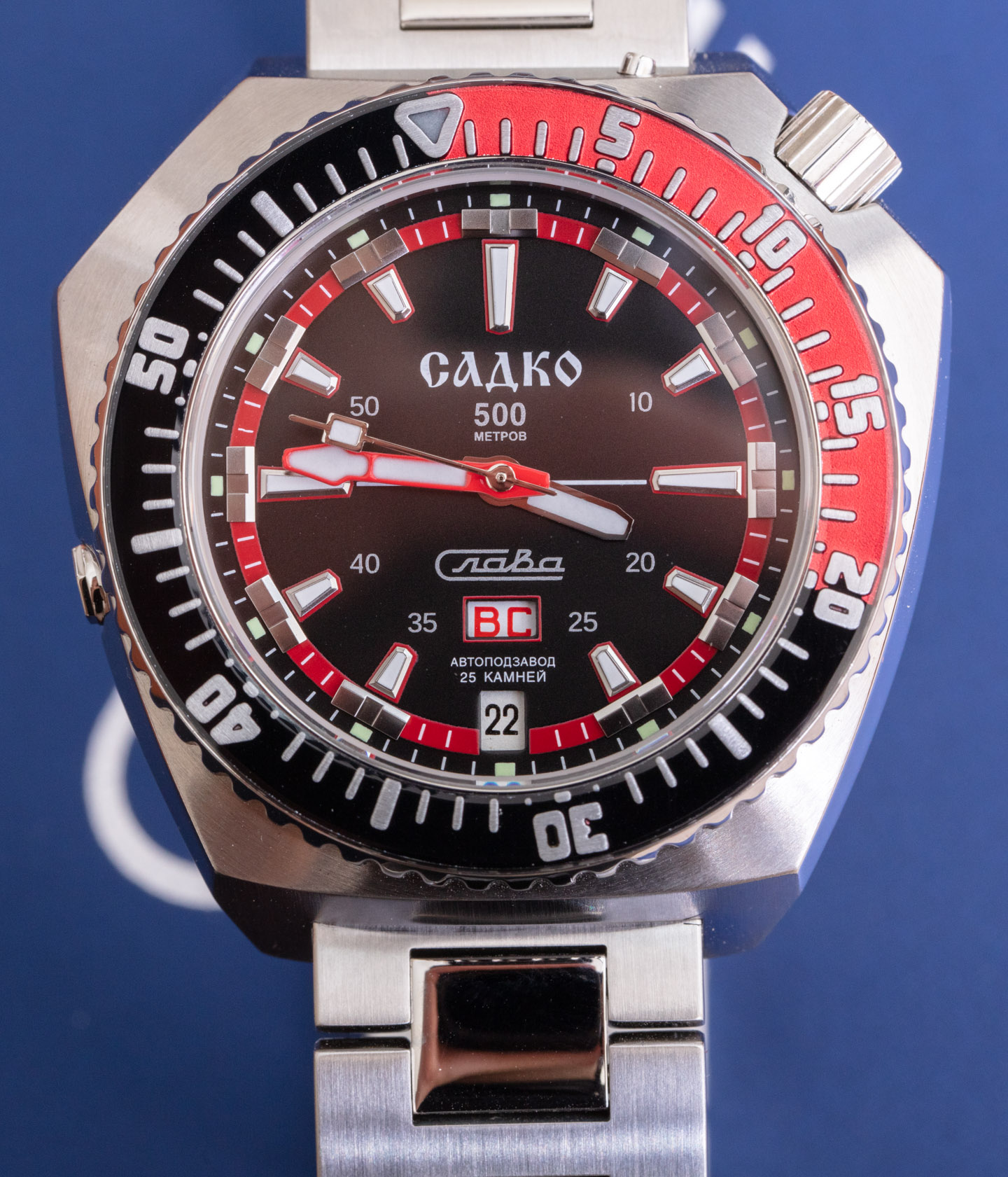 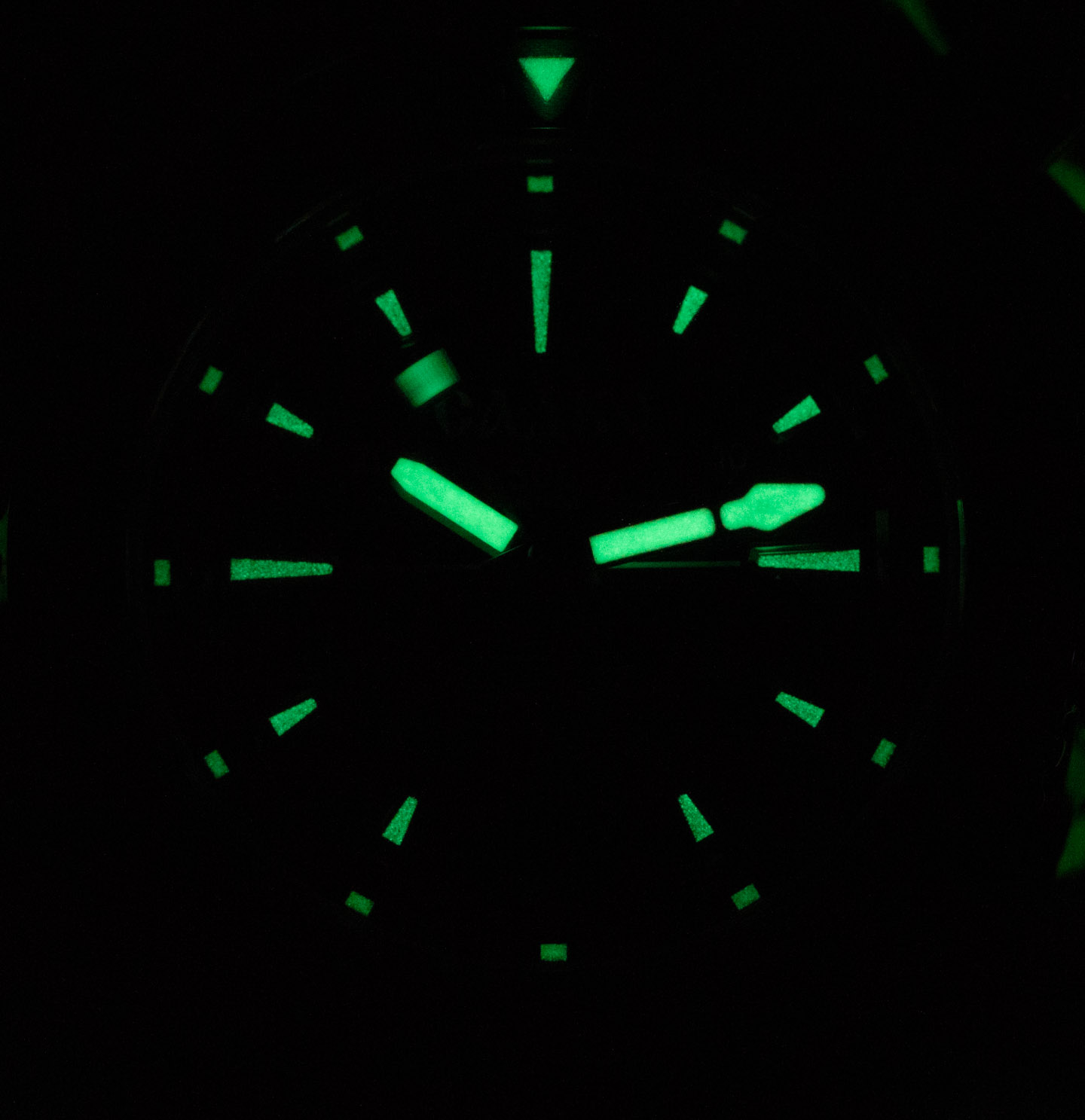 Also on the dial is the elaborate applied Sadko name. The original watches did not even have the Slava name on the dial, even though they were produced by the company. On the website, Slava doesn’t really seem to explain the story behind the Sadko watch. It is possible that the story isn’t known. I don’t really know who designed the Sadko watch and why, but the timepiece itself offers enough clues to understand what the creator was originally thinking. The watch is an homage to a character named Sadko, who is naturally someone to theme a dive watch around given his adventures in the “Underwater Kingdom.”

Sadko debuts in the 11th or 12th-century Russian as the lead character in a traditional Russian epic poem (known as a bylina) story; he is probably based on a real person. Rather than being a royal or ruler, he is actually a merchant. In fact, he is a very interesting character to based a watch concept around at the late stages of Communist Russia. Sadko was made more famous by being the subject of an 1867 opera by Nikolai Rimsky-Korsakov and later in 1871 a poem by Alexei Tolstoy 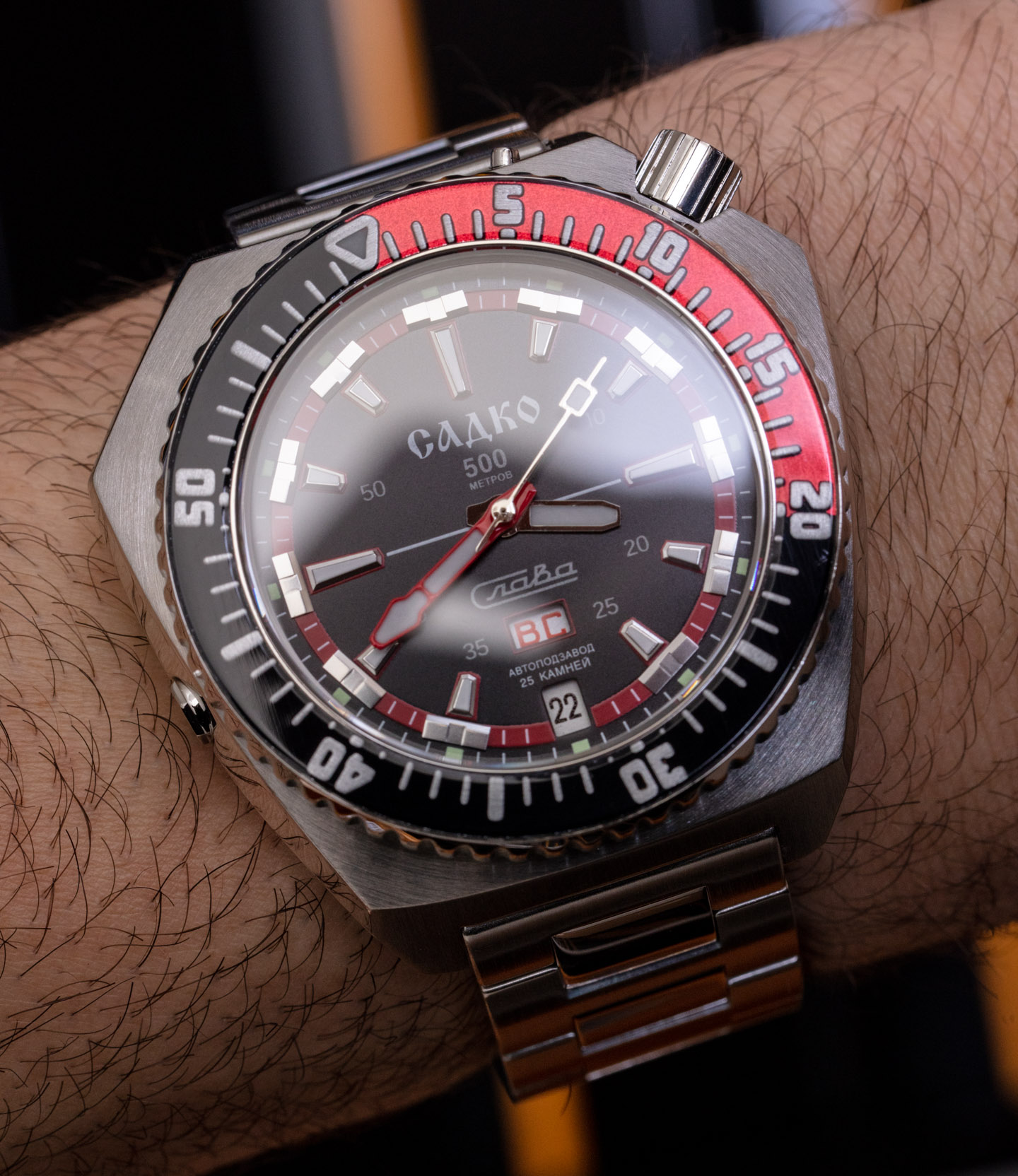 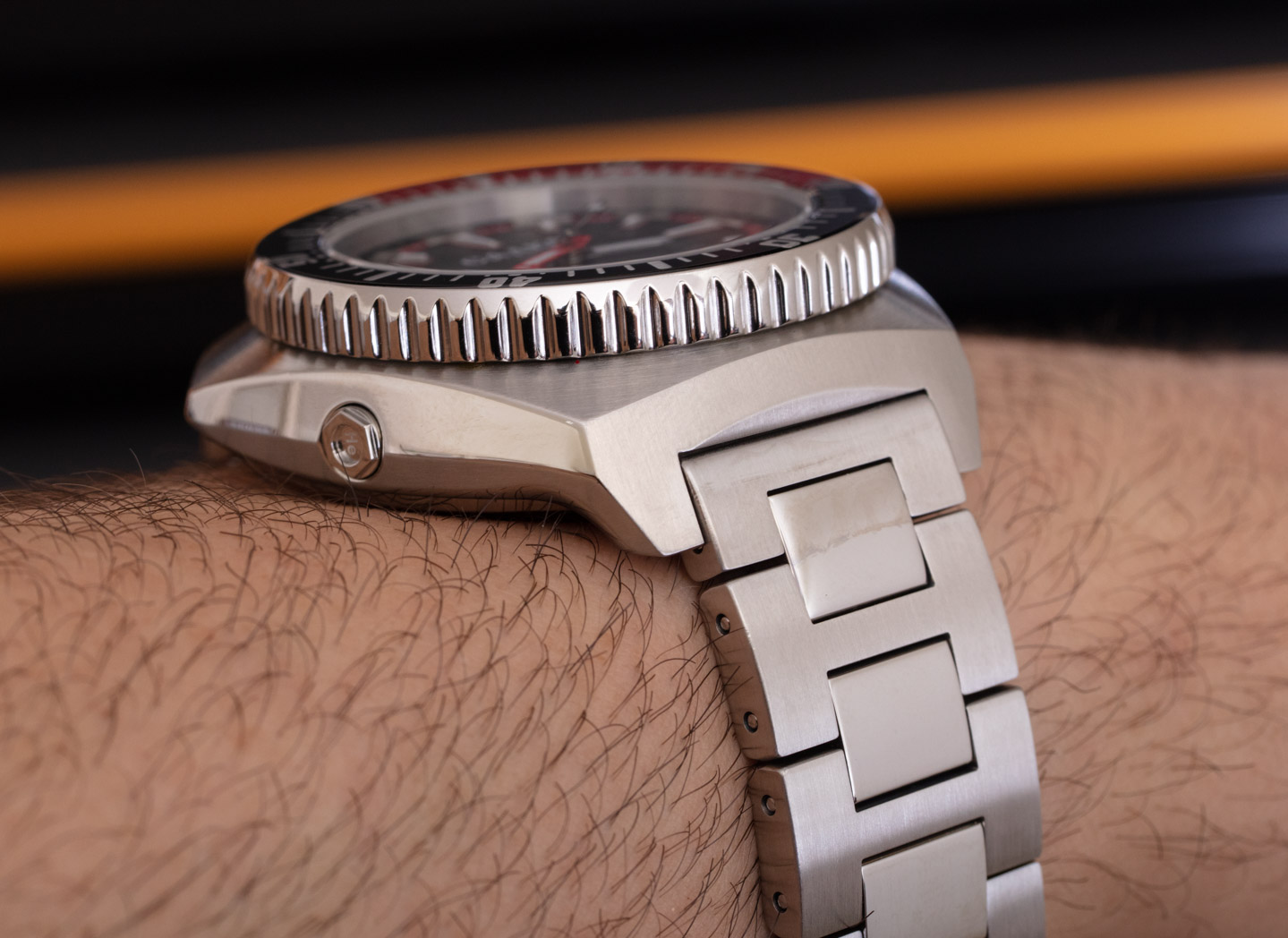 Sadko soothed listeners (such as the “Sea Tsar” who ruled the Underwater Kindgom) with the sound of his gusli, a traditional Russian string instrument that is very beautiful when played. The instrument is usually “wing-shaped” and is what I believe inspired the shape of the Sadko watch case. Most of the discussion about the Sadko watch online refers to the case shape as “bullhead,” but this is incorrect, in my opinion. Bullhead chronograph watches have pushers at the top of the case. Given the similarity of the Sadko to a vintage Omega bullhead chronograph watch, I think people simply associated their designs given the shape of the Sadko and the upwards position of the crown. From now on, we can refer to the Sadko as having a gusli-shaped case. The crown has red lacquer in it and a letter “C,” which in Cyrillic makes an “S” sound (for either Slava or Sadko).

The caseback of the Sadko watch is remarkably detailed for a humble diver’s watch. The modern version picks up where the vintage Sadko left off, recreating its artwork in a nicer way, and adding some additional text (all in Russian). Most of the caseback is a deep relief of Sadko playing his gusli while spending time in the sea. We can easily imagine a person who lived nearly a millennium ago playing a gusli instrument on the deck of his merchant ship for hours on any given voyage — who later inspired the epic story. This totally could have been his watch, and the use of a more antique-style font for the Sadko logo (on the original model — it is printed on the re-issue) is a nice touch. 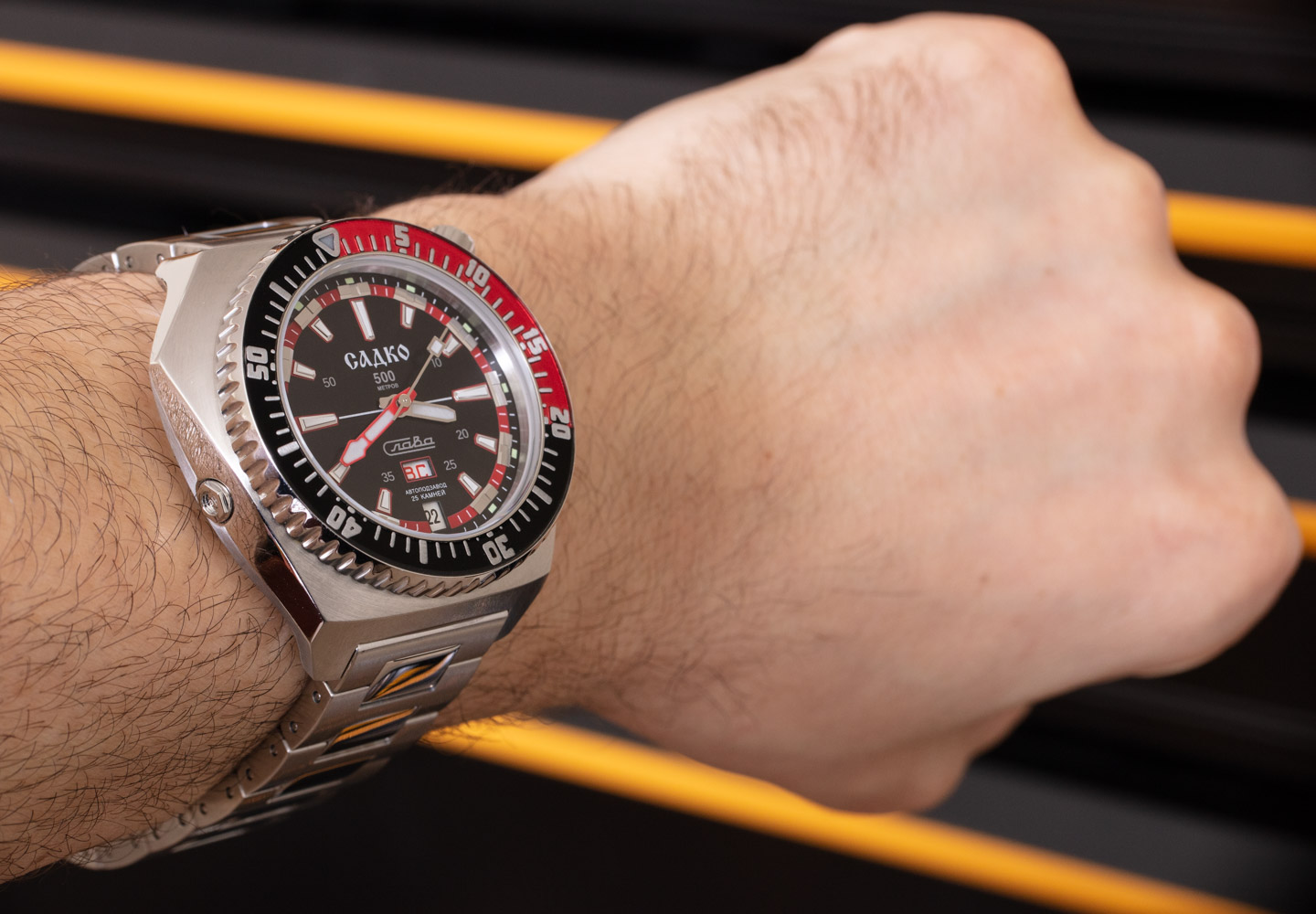 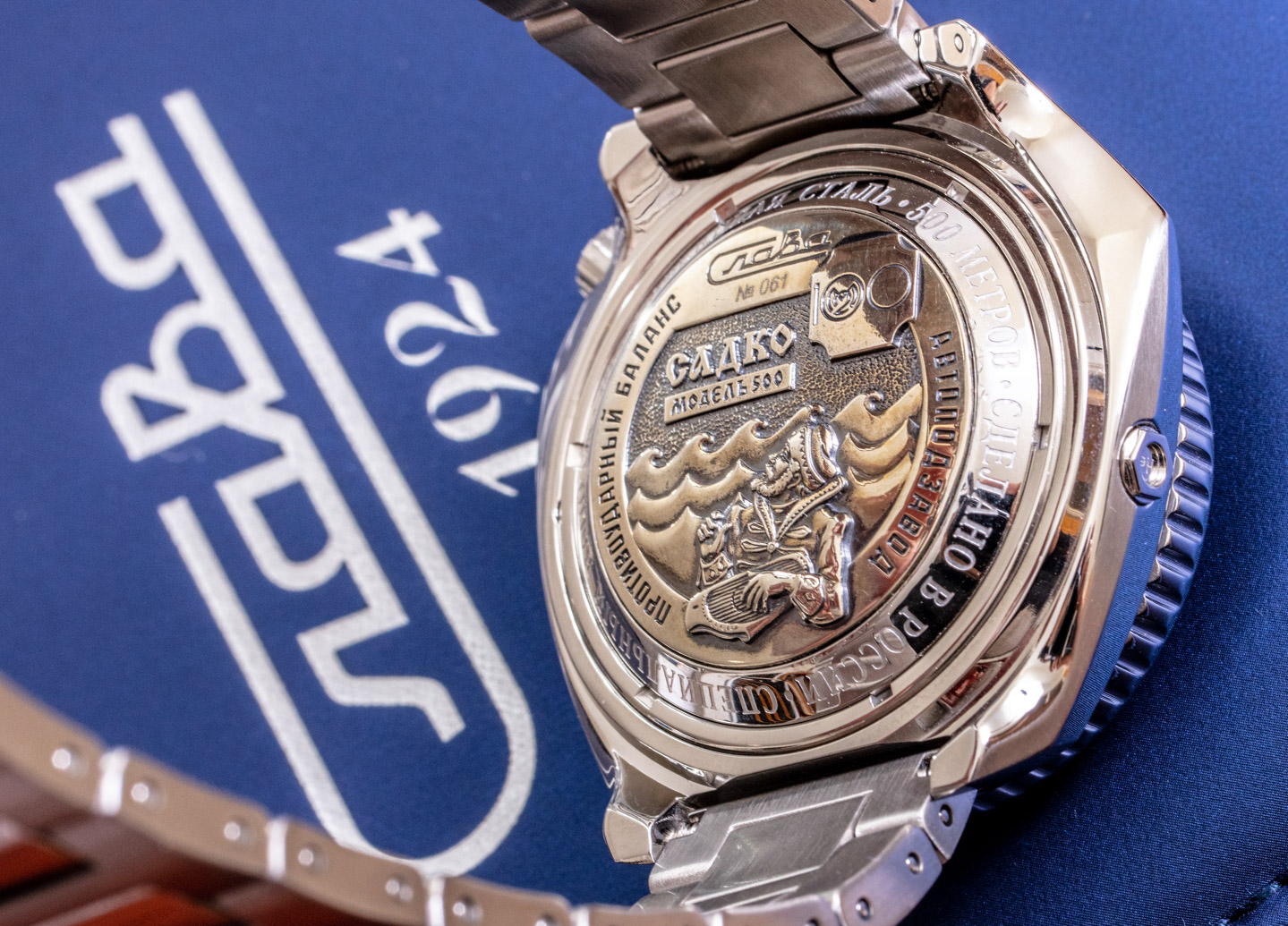 Inside the watch (presumably both yesterday and today) is the Slava caliber 2427 automatic movement. The 2427 movement has a strange combination of features and is designed as a relatively stable (not ultra- accurate) long-life movement for functional purposes. A lot of Soviet-era mechanical watch movements approached service expectations differently than, say, Swiss watches. In Switzerland, accuracy was valued more than service intervals. In the USSR, by contrast, a watch that had to be serviced less often was more valued.

The 2427 operates at just 18,000 bph (2.5Hz), but has dual mainspring barrels, a feature typically found in higher-end watches today. At this relatively slow beat rate, accuracy needs to be promoted in some other way. With two mainspring barrels rather than one, power delivery has a less dramatic torque curve as power from the springs wind down. This helps promote isochronism, which means that the watch’s accuracy will deviate less over the time that the mainspring assembly winds down. The power reserve of the movement is about 40 hours, which could be theoretically longer, but my guess is that the movement has a fair amount of friction. 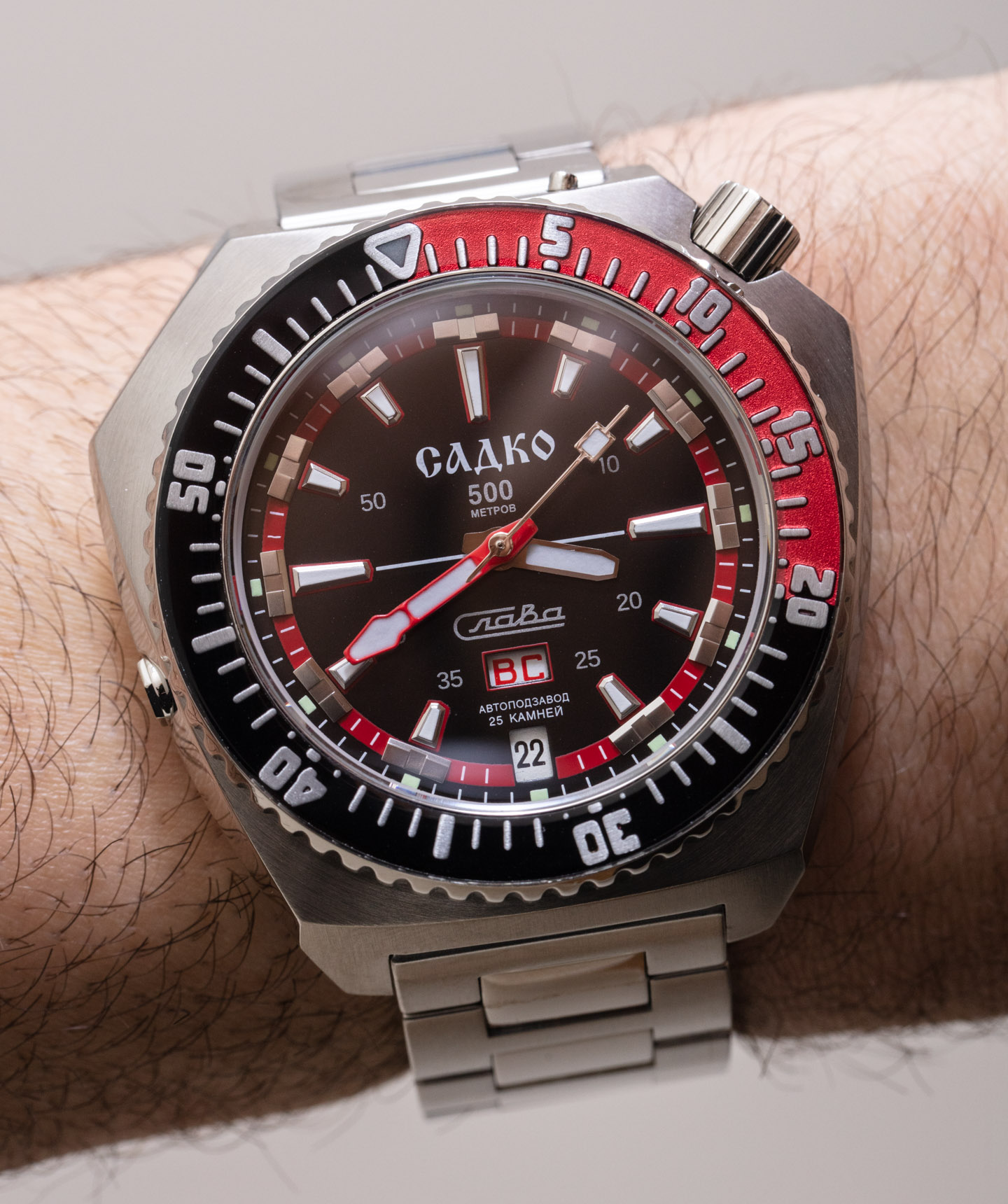 The date-day automatic features of the 2427 and unique engineering make it a neat movement to have. It isn’t considered one of the better Russian-made movements out there (because it actually needed servicing), but it is neat to still see them showing up in brand new watches today. I actually reviewed a watch with a Slava 2427 movement back in 2015 when reviewing the CCCP Heritage watch here.

With a well-done and distinctive design, along with compelling story, the Slava Sadko re-issue watch is also worthy because pretty much no one can actually have the originals (such as with the Omega Speedmaster Alaska Project timepieces). Slava seems to agree, having put in effort on an entire Sadko collection. In Russia, stuff like this will do quite well, but I think enough timepiece enthusiasts in other places can likewise take part in some mythic gusli action. Price for the Slava Sadko 5000167/100-2427 watch is 86,200 Russian Rubles, or about $1,169 USD. Learn more on the Slava website here.