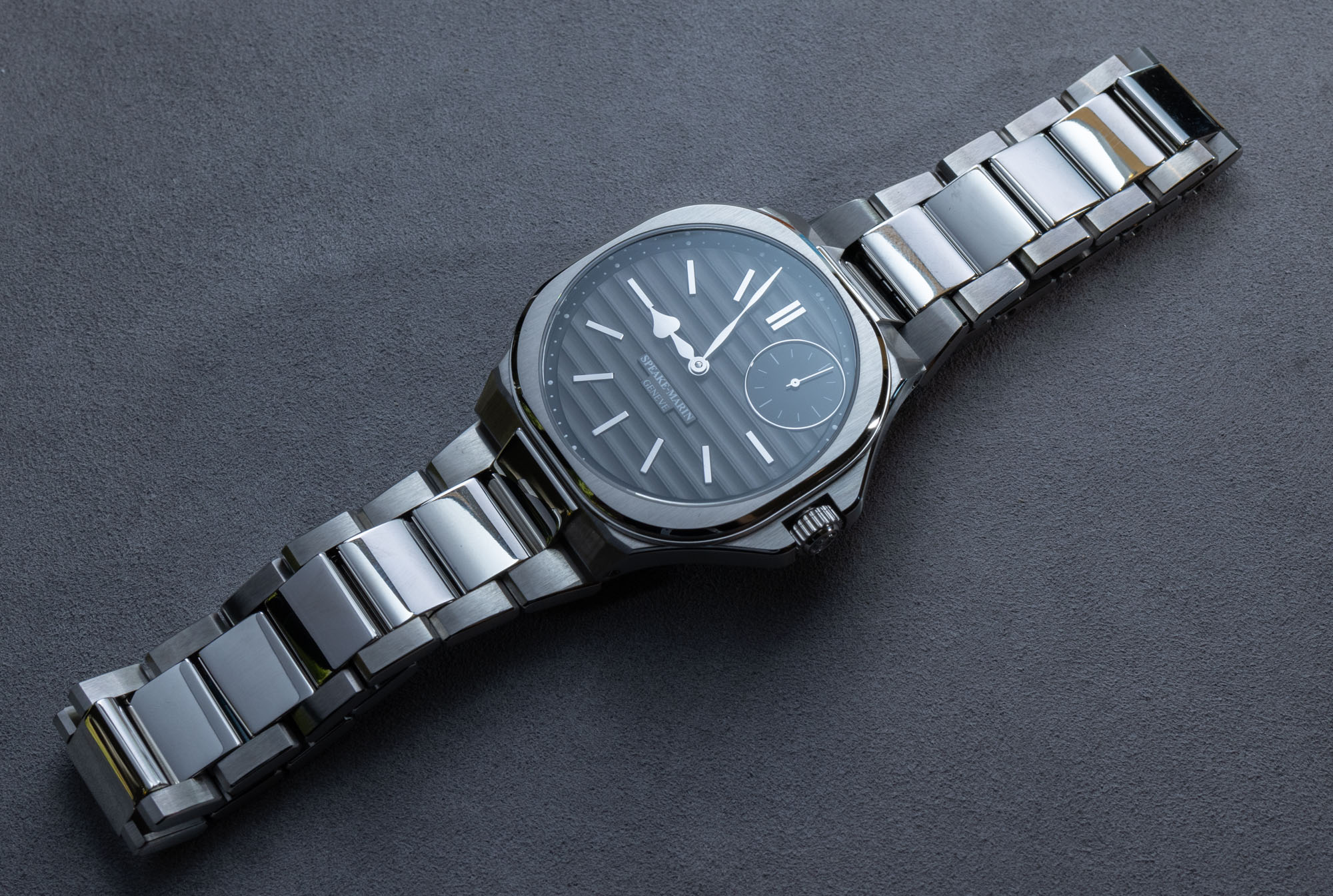 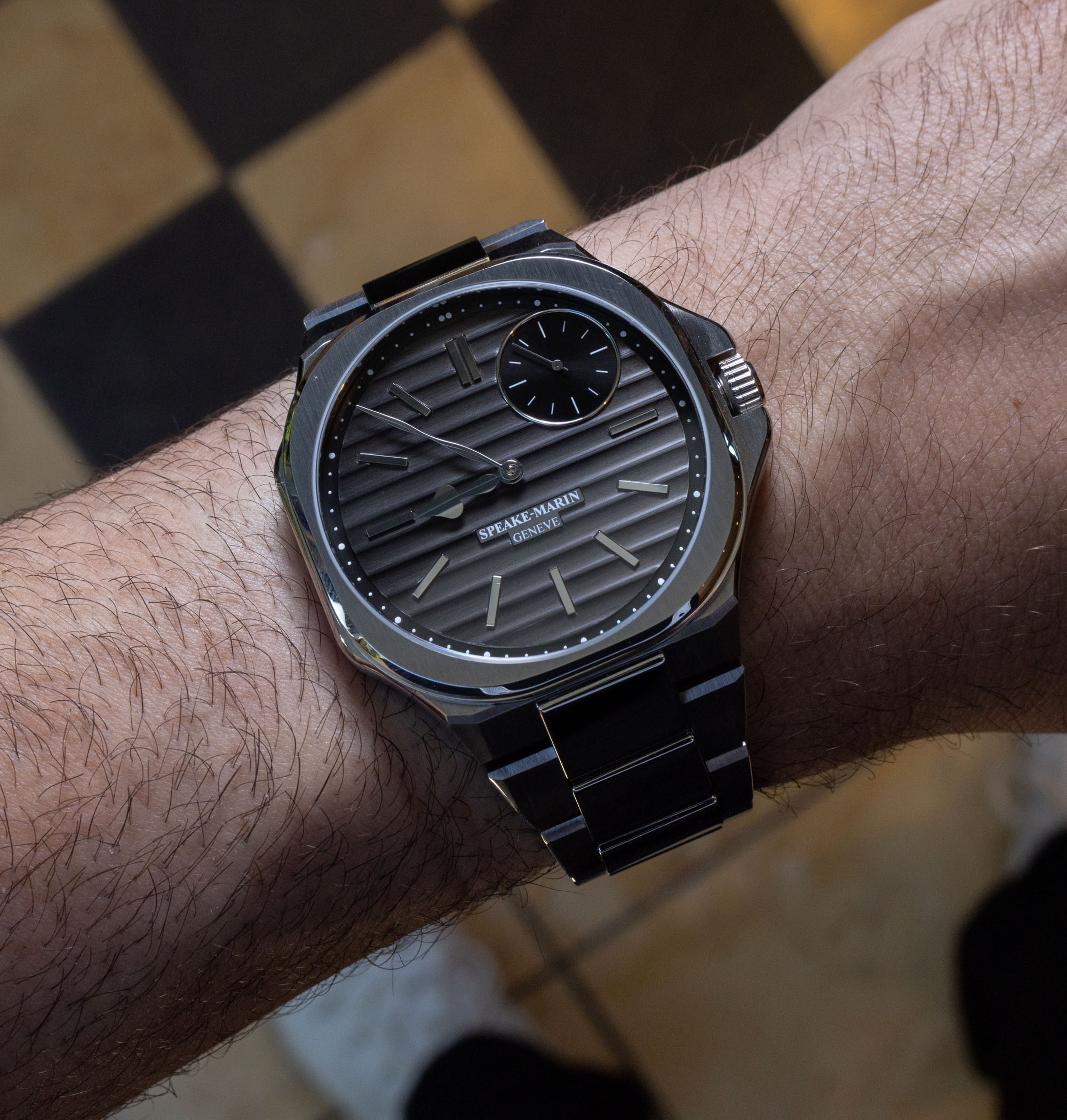 At Watches & Wonders 20220, Swiss watchmaker Speake-Marin introduced its first integrated bracelet watch (in steel) with the simply named Speake-Marin Ripples (originally debuted on aBlogtoWatch here). The name directly refers to a finishing technique on the face that is a series of horizontal “ripple” lines. It makes for a very interesting visual experience and hearkens to the type of decoration one might see on a mechanical movement.

The Ripples takes design cues from a few different places but begins with the brand’s seminal Piccadilly watch that was created by the brand’s founder Peter Speake-Marin (now Peter Speake) He is no longer associated with the brand, but he is a British-born and Swiss-trained watchmaker who was living as an antique horology restorer in London when he came up with the idea for the Piccadilly collection. Its iconic hands and some of its shapes have made their way into the Ripples, along with a new cushion-shaped case that measures 40.3mm-wide. In fact, according to Speake-Marin, the name of this new case is “LA City,” which references London as opposed to Los Angeles. Speake-Marin doesn’t publish the case thickness, but as you can see on my wrist, the Ripples isn’t overly thick at all, and part of its appeal is the relatively slim case (which is water resistant to 50 meters). 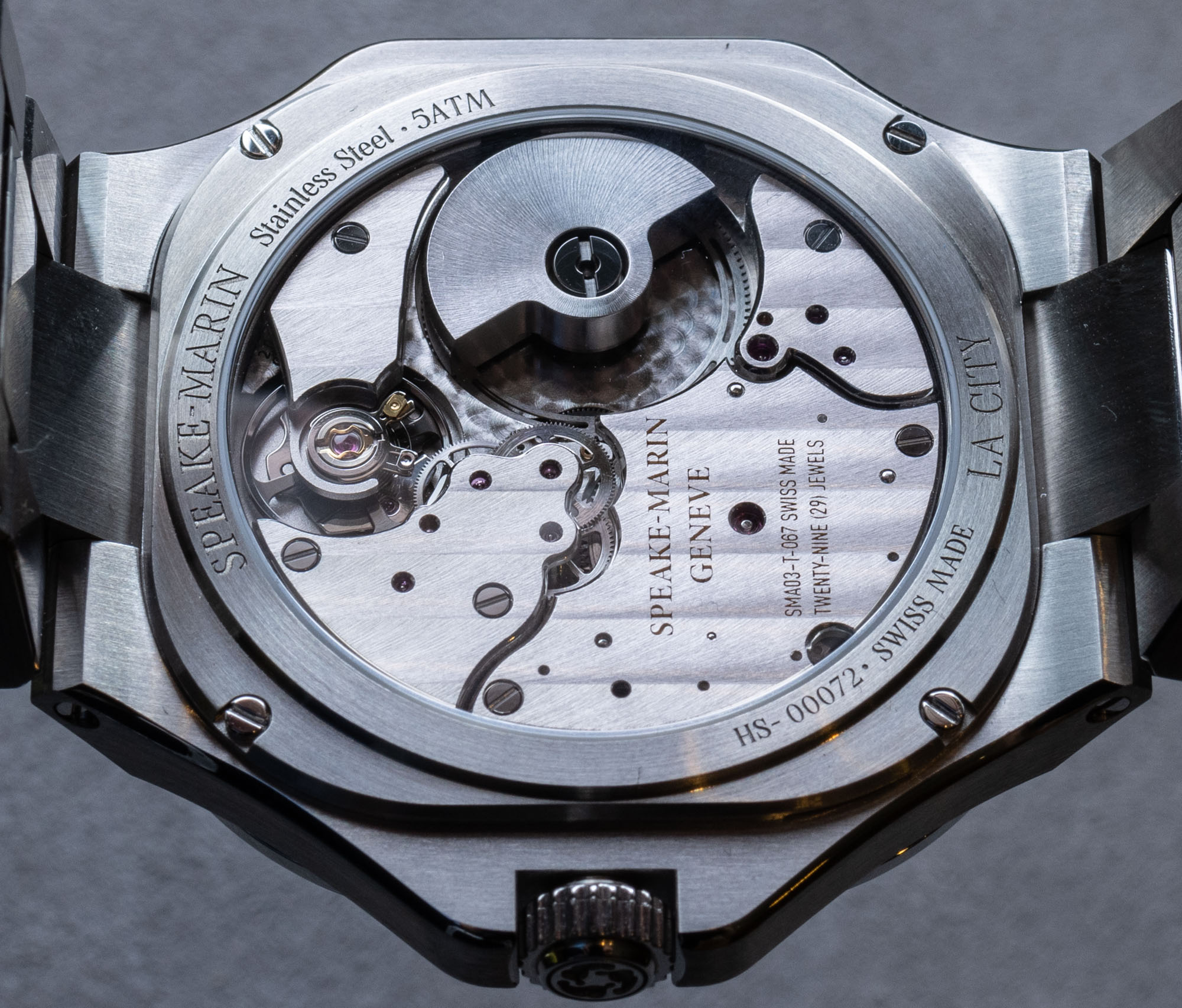 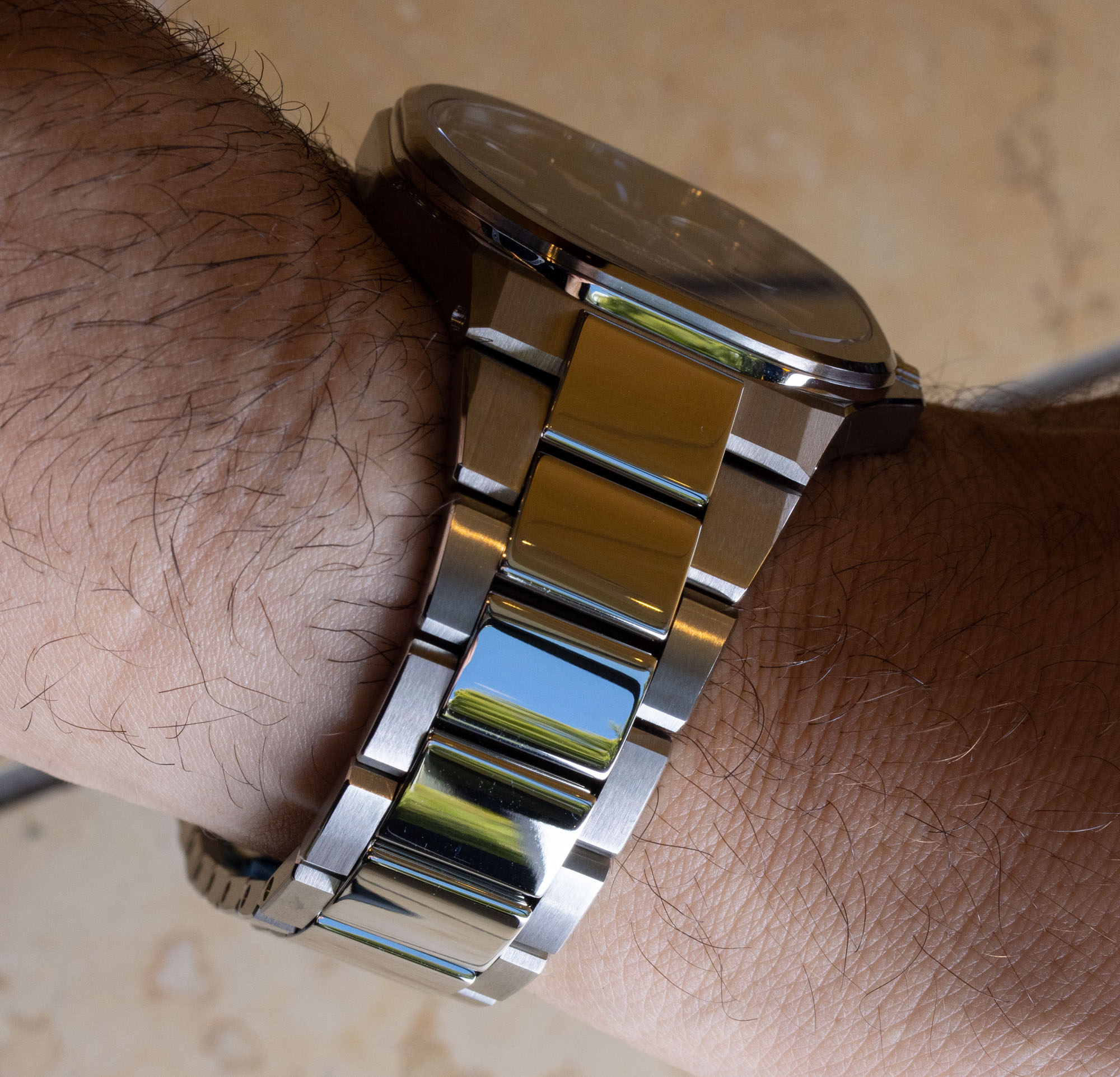 The case is a combination of shapes including a round dial, a cushion shape for much of the case, and, of course, the integrated tapering bracelet. Visually, the Ripples is its own thing but reminds one of other watches: the Rolex GMT-Master II (thanks to the polishing style of the three-link bracelet design), the Bell & Ross BR05, and the Glashutte Original Senator Seventies watch. So, in a very real sense, while the Ripples is undeniably an original design, it is imbued with a lot of visual personality characteristics that collectors may already be familiar with.

The asymmetrical face with its subsidiary seconds dial is a deliberate choice to give the overall Ripples design a bit of spunk. I am not saying that this design element will survive each future iteration of the Speake-Marin LA City watch collection, but I think it was a good idea to inject as much character as possible into a watch like this, which is designed to be exclusive by nature. The Ripples isn’t for everyone, even though it is a very decent watch and, accordingly, Speake-Marin has claimed that only about 100 pieces in the LA City collection will be produced each year. 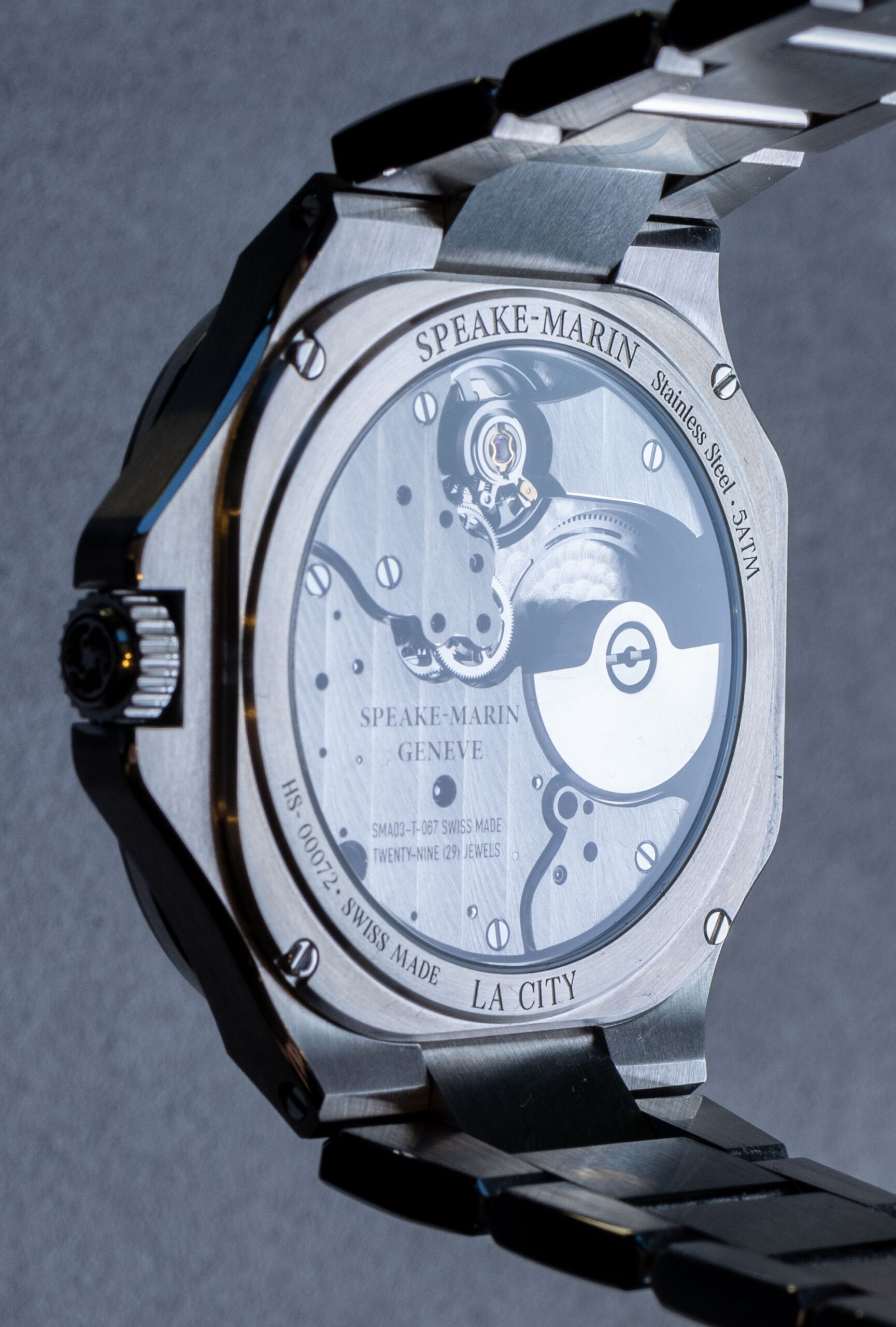 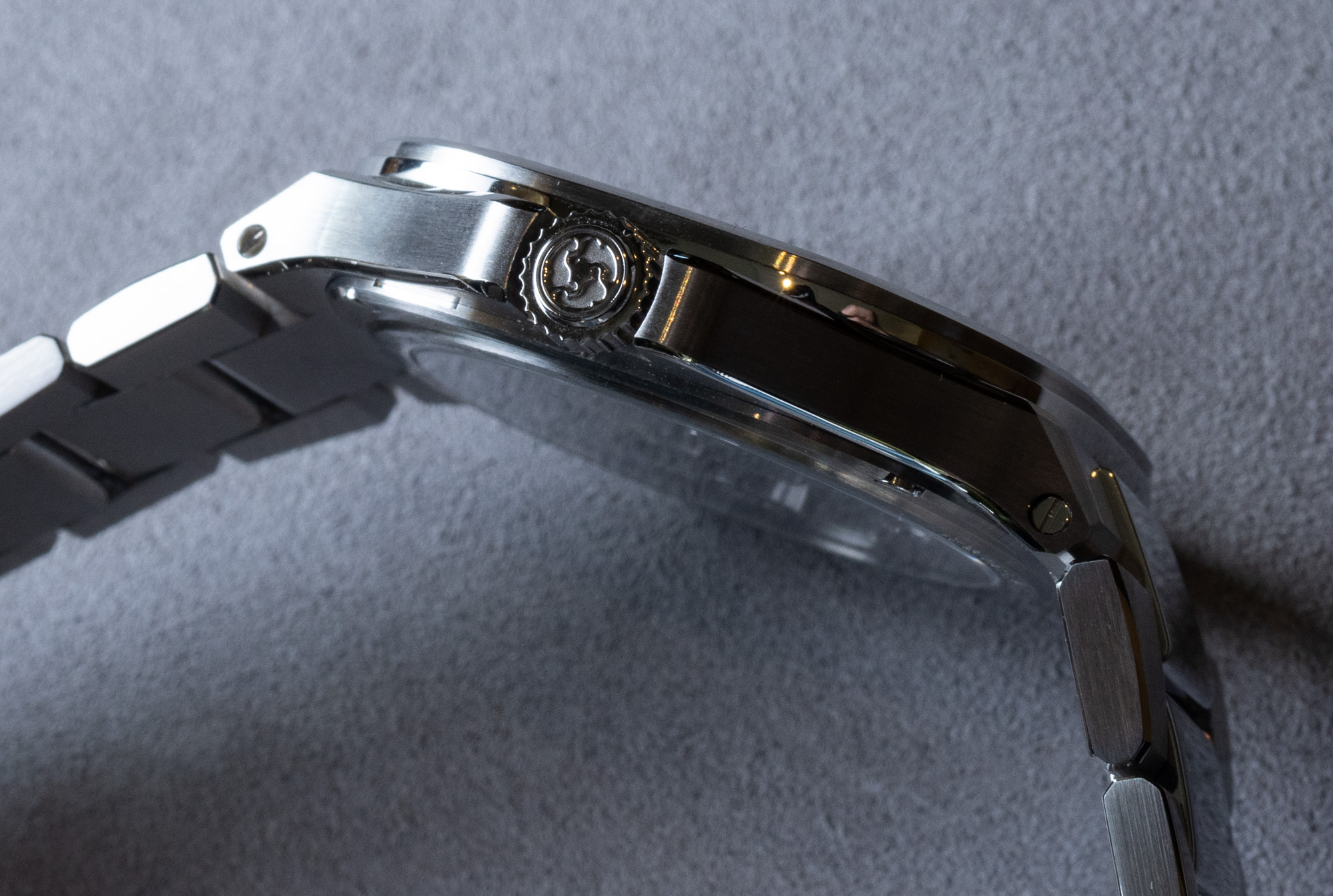 This particular Ripples dial has a ruthenium gray-colored dial with applied wedge hour markers and polished hands. The gray-on-gray look with the dial and the steel case is conservative when compared with the overall avant-garde nature of the watch. That was probably intentional, and I think it is wise for Speake-Marin to position the Ripples watch as “different” but not “strange.” It is a delicate balancing act to get right.

Finishing-wise, the LA City case is really nicely polished and has a very solid construction. It feels like an expensive watch, and I appreciate the little things like the hand-beveling on the edges of the steel bracelet links. On the rear of the watch, there is an expansive view through the sapphire crystal of the Speake-Marin caliber SMA03-T automatic movement. Using a micro-rotor as part of the automatic winding system, the finely decorated movement operates at 4Hz with a power reserve of 52 hours. Functions are just the time with a subsidiary seconds indicator. 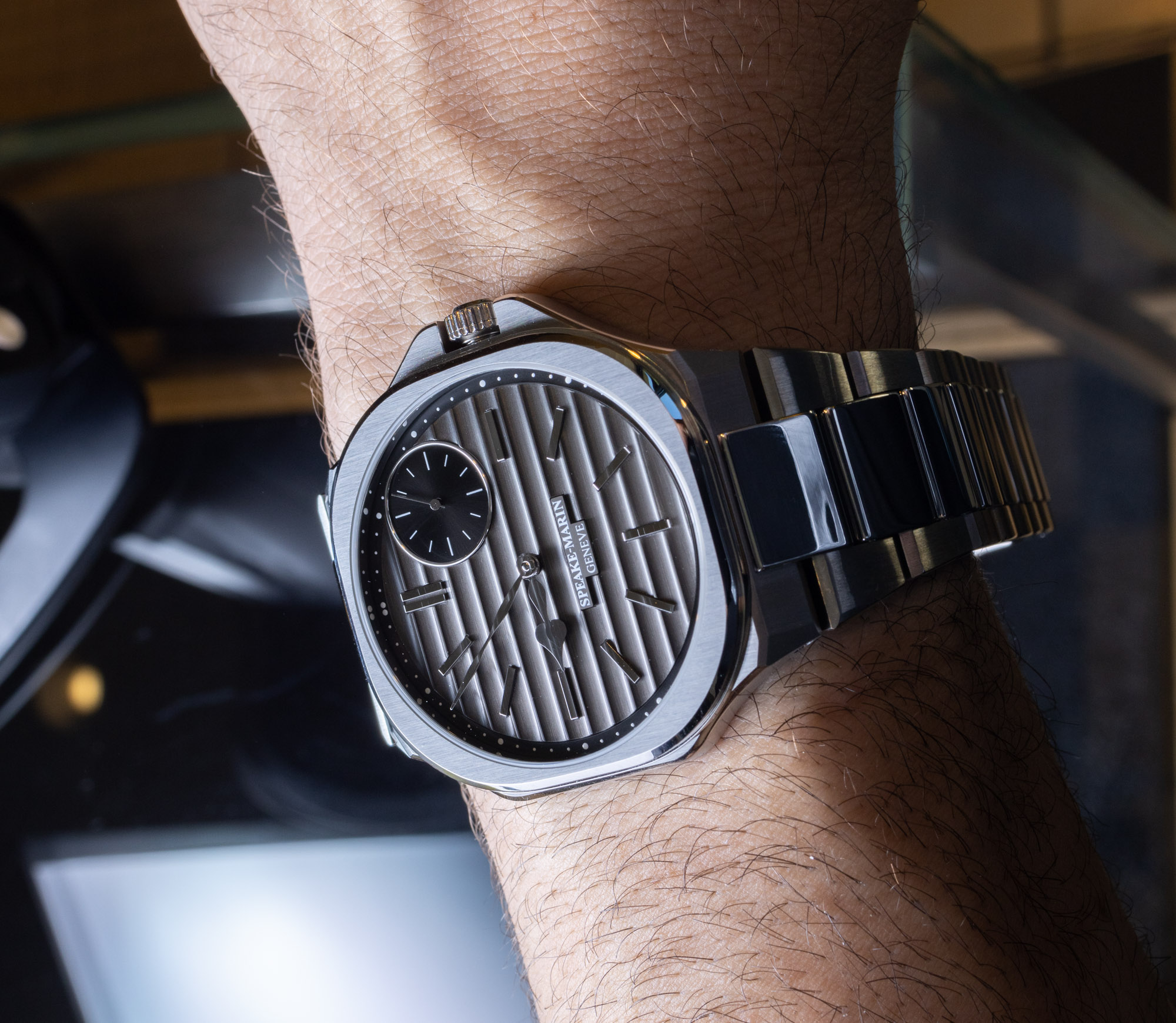 The Ripples is not a perfect watch, but it is a solid entry into an increasingly competitive and crowded space of steel integrated bracelet watches. The overall design can be accused of being a bit all over the place, even though once you wear it, the form makes a case for itself and the design is genuinely fun. The case should probably aim to have 100 meters of water resistance, and it would be interesting to see how luminant might be applied to the otherwise attractive dial. Speake-Marin doesn’t skimp on little details in the watch, but story-telling about the Ripples product is a bit anemic on its website. I am interested to how other people feel about the Speake-Marin Ripples watch who have also had a chance to wear one of these interesting and rare modern watches. Price for the Speake-Marin Ripples watch is 19,900 Swiss Francs. Learn more at the Speake-Marin watches website here.