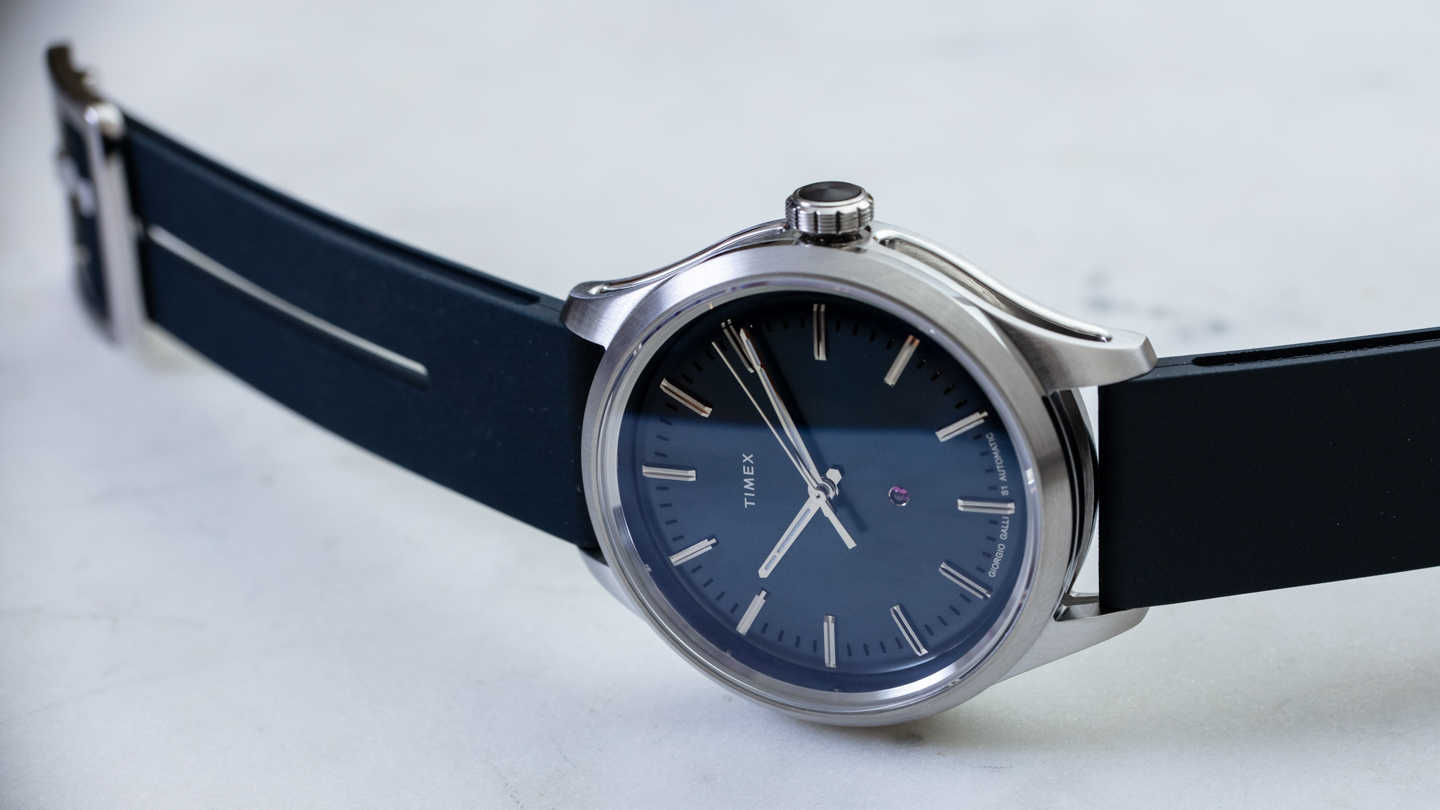 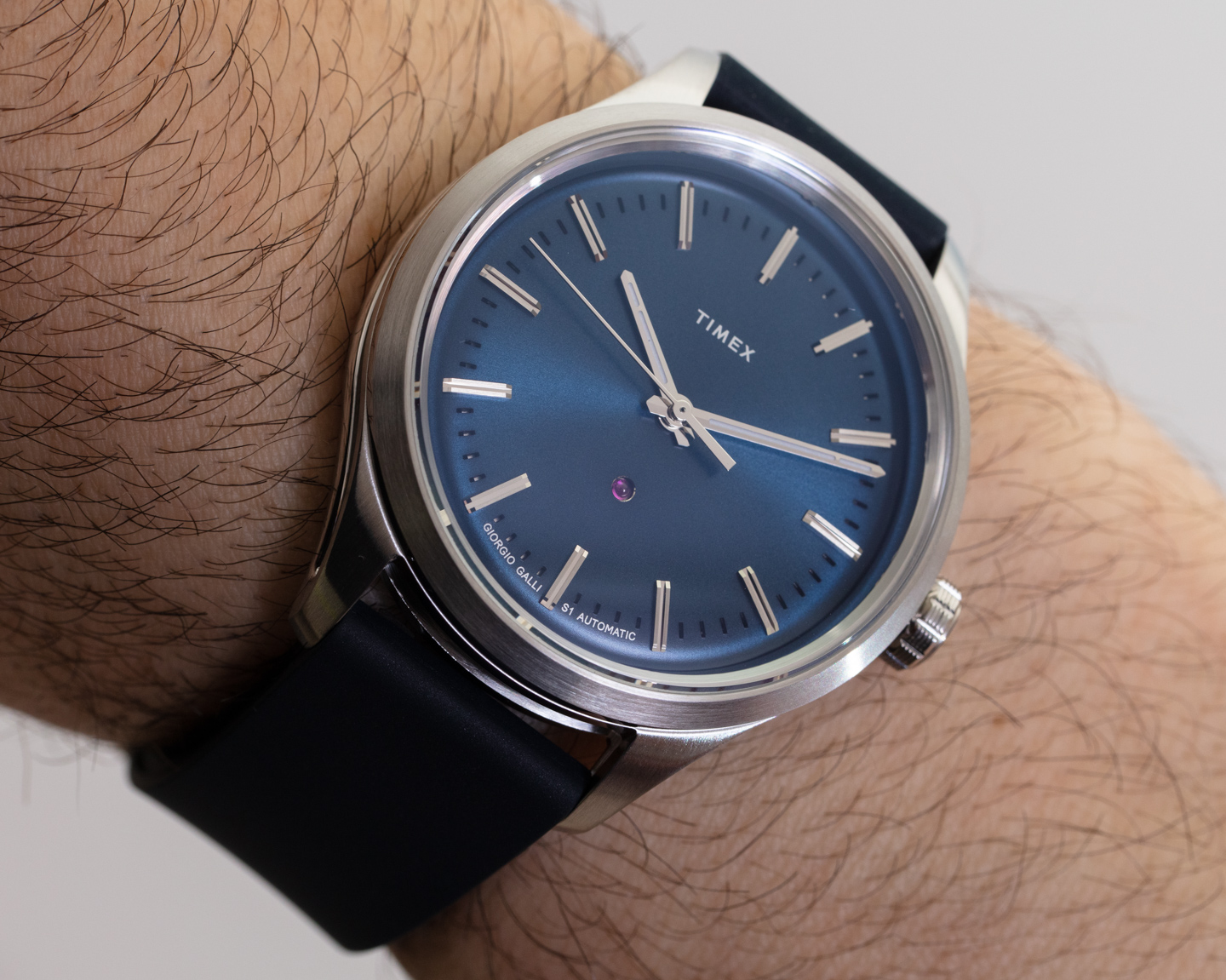 There is a lot of backstory to this watch, and in March of 2021, I did an interview with Mr. Giorgio Galli here to discuss the S1 timepiece family. I really encourage people serious about these watches to learn more about their story, but let me give you the summary version. Giorgio Galli is a design leader for Timex based with the brand’s Italian team in Milan. He spends most of his time designing Timex and licensed brands (such as Salvatore Ferragamo and Versace), but the S1 was a passion project for him that blended his interest in modern design, vintage watches, and contemporary cityscapes. This is the first product family that bears Giorgio’s name, and it also represents a slightly higher than average price point for Timex at $450 USD. 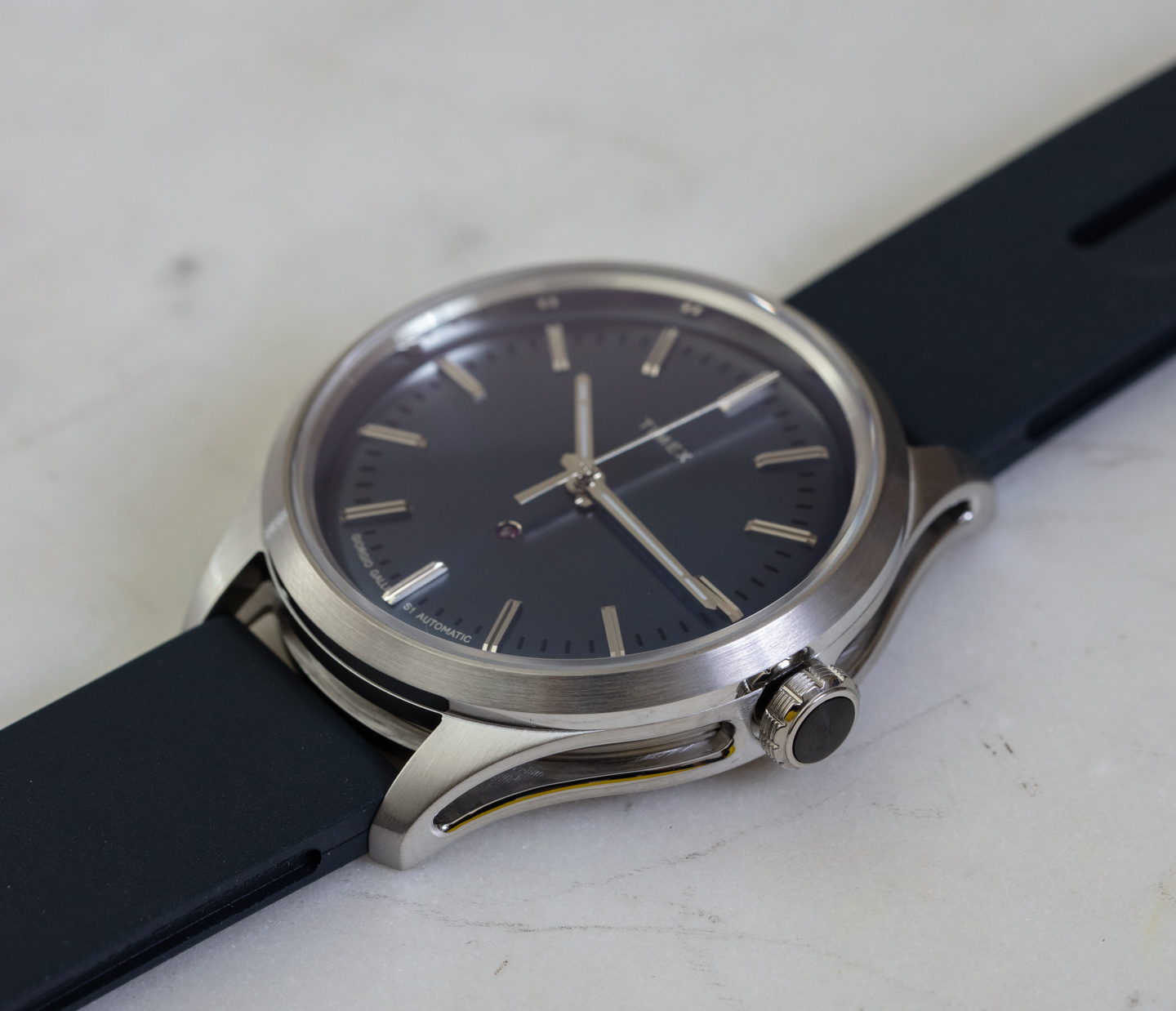 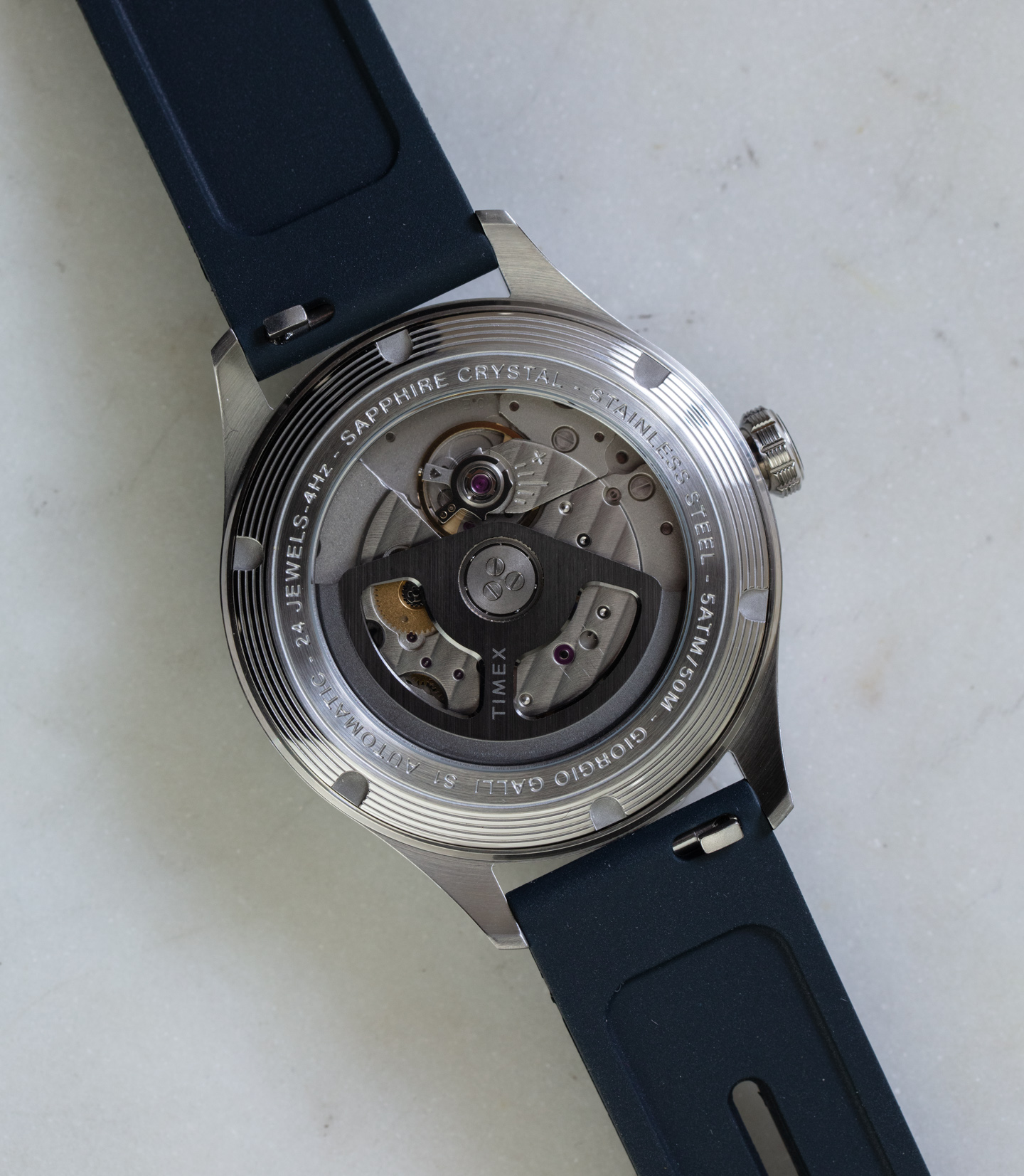 What’s new about the Giorgio Galli S1 38 watches? A few things. First is the smaller case size option at 38mm-wide. The original S1’s steel case is 41mm-wide and to appeal to more audiences, Galli felt that a 38mm-wide version would also make sense. While 38mm is often too small for my tastes, it is an extremely popular option in many parts of the world and for many different types of wearers (including women). The case is more or less the same shape as the original S1, using a complicated set of finishing and detailing within a very classic overall profile. A trick for the watch is that the case uses not a traditional milling process to shape but rather a fancy injection-molded process that, when combined with post-production finishing and polishing, yields this fantastic result. What that means for consumers is that they get a more complicated case than would normally be available at this price point.

The interesting lines and skeletonized sections of the case make for a lovely frame to view the Japanese Miyota caliber 9039 4Hz, two-day power reserve automatic movement inside, with a custom S1 model rotor. That is one of Miyota’s latest movements designed to compete with Swiss Made calibers such as the ETA 2824 — which, again, would not be available in a watch at this affordable price point. 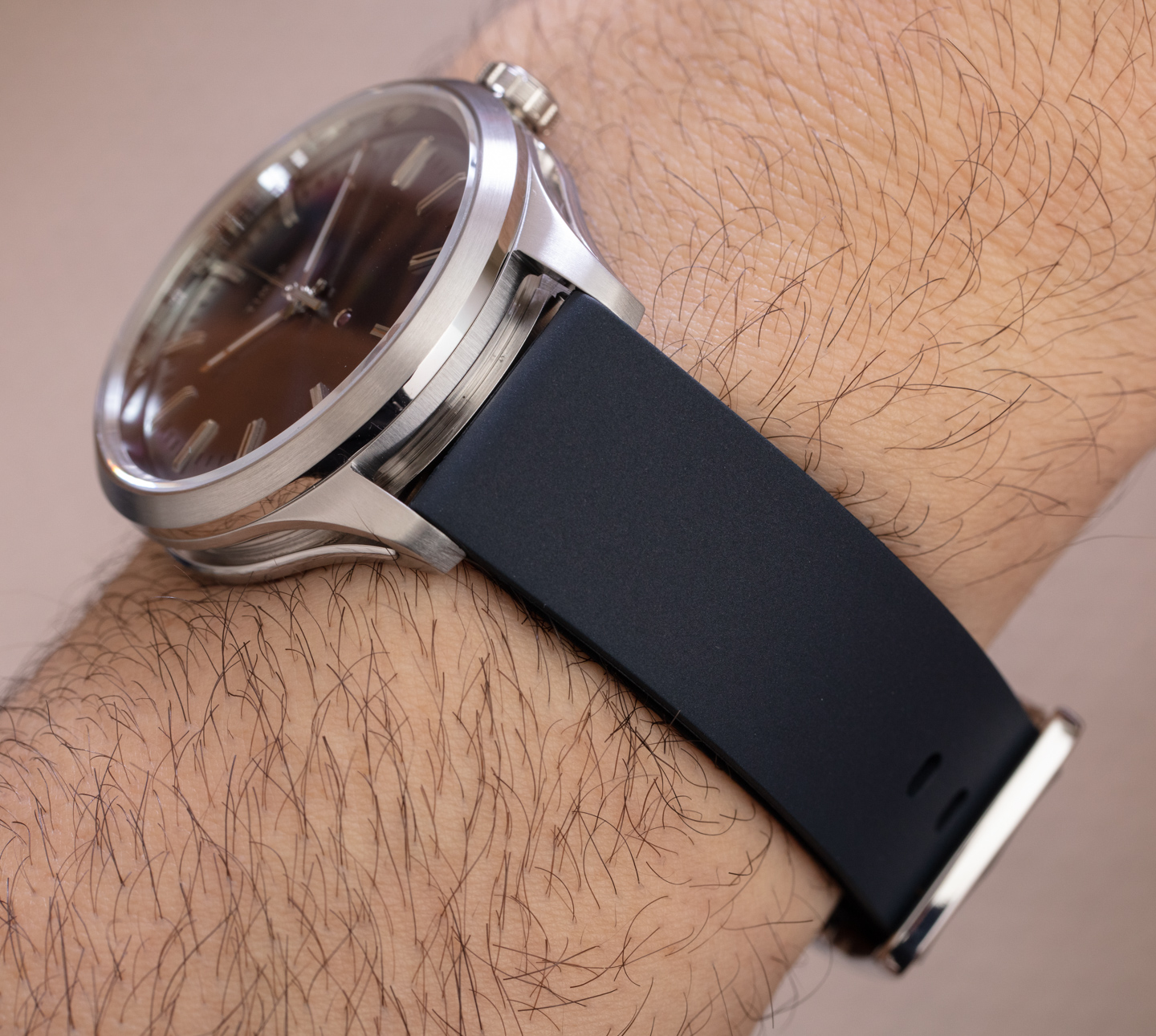 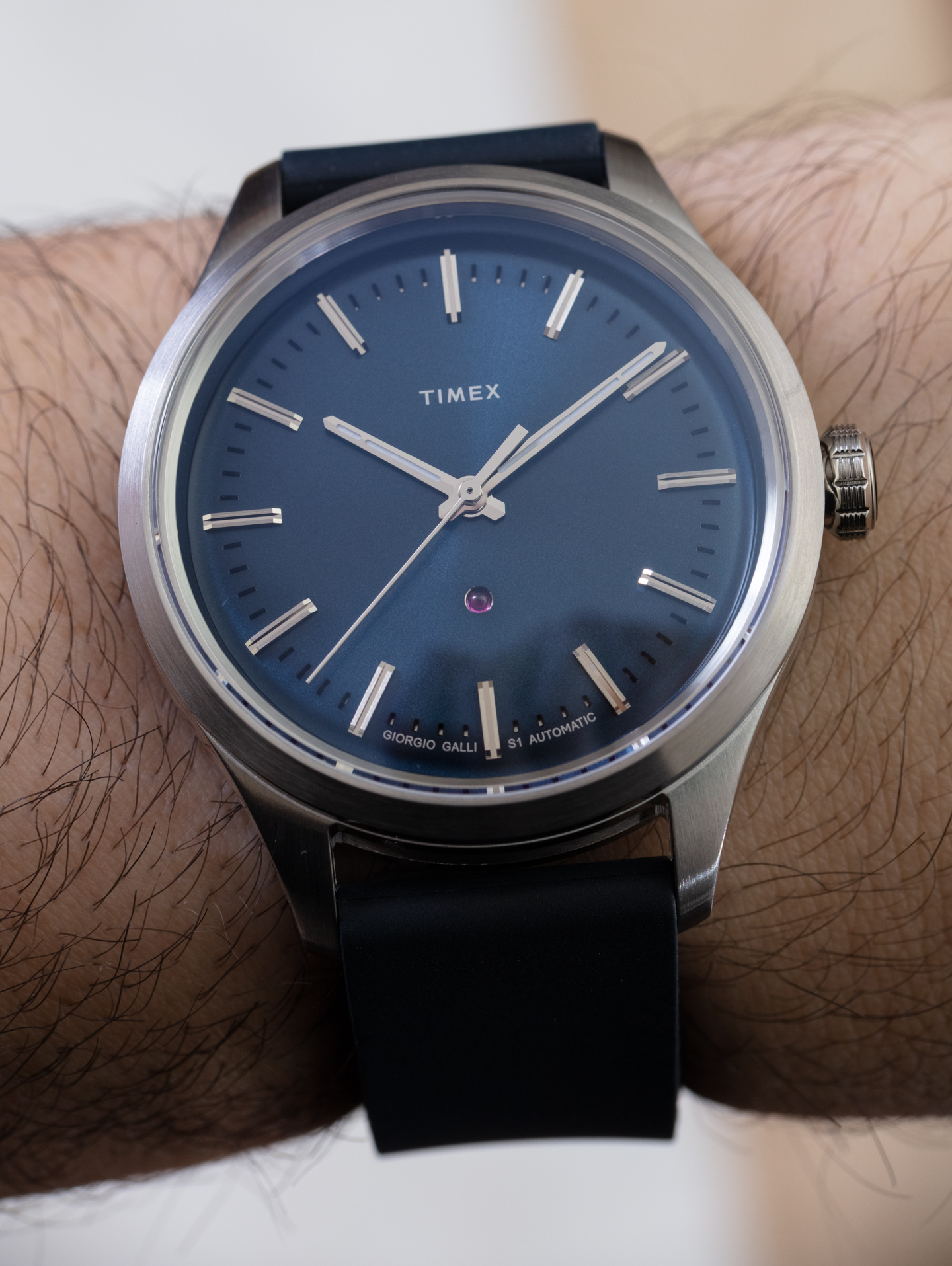 Speaking of mechanical movement, I feel obliged to state again that I wanted wearers of this watch to think about its mechanical nature when I advised Mr. Galli a few years ago that it would be cool to place a red ruby palette on the S1 dial over the 6 o’clock hour marker. While there for style only, I felt that it would be a beautiful mental reminder that this is a mechanical watch and “not your ordinary Timex.” Galli agreed, and that is the reason for the red ruby on the dial. I’m so glad it worked out well, and I feel that this design aesthetic really helps develop the rich personality that the S1 watches have.

The 38mm-wide version of the Giorgio Galli S1 watch has a slightly different dial than the original S1 41 models. In addition to some new color choices, such as the pictured blue, as well as an olive green and attractive shade of gray in metallic sunray, the hour markers and hands are slightly updated on the S1 38. How are they different? The changes are very subtle, to be sure, but the idea is to make the S1 38 feel a bit more vintage-inspired. Perhaps this is because of the smaller case size, but when you compare the S1 38 and the S1 41, you can clearly see that one is trying to be a bit more modern and one is trying to be a bit more retro. I like them both, but I also predict that most people will generally like the S1 38 dial more, even if they prefer the 41mm-wide case due to wearing preferences. 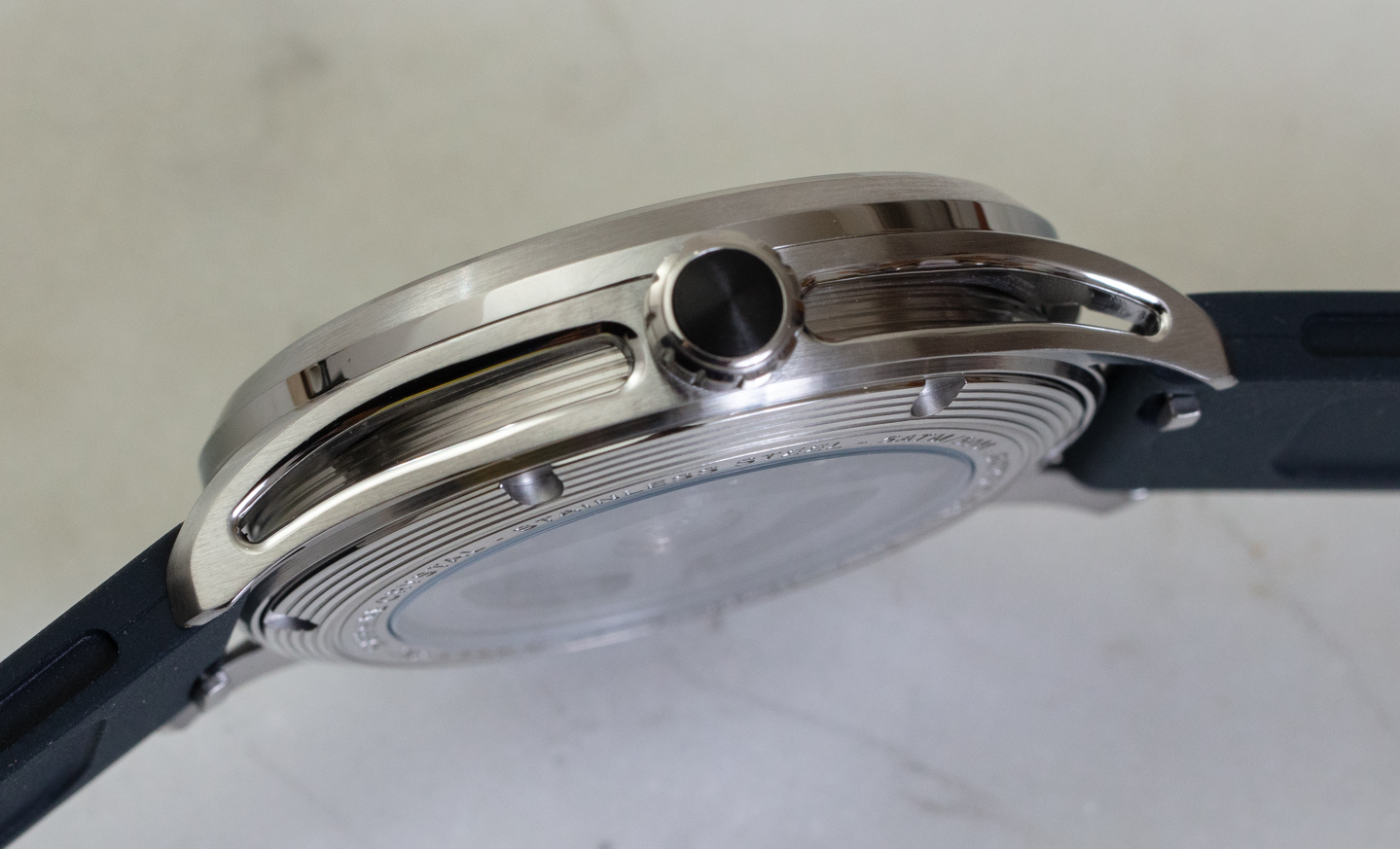 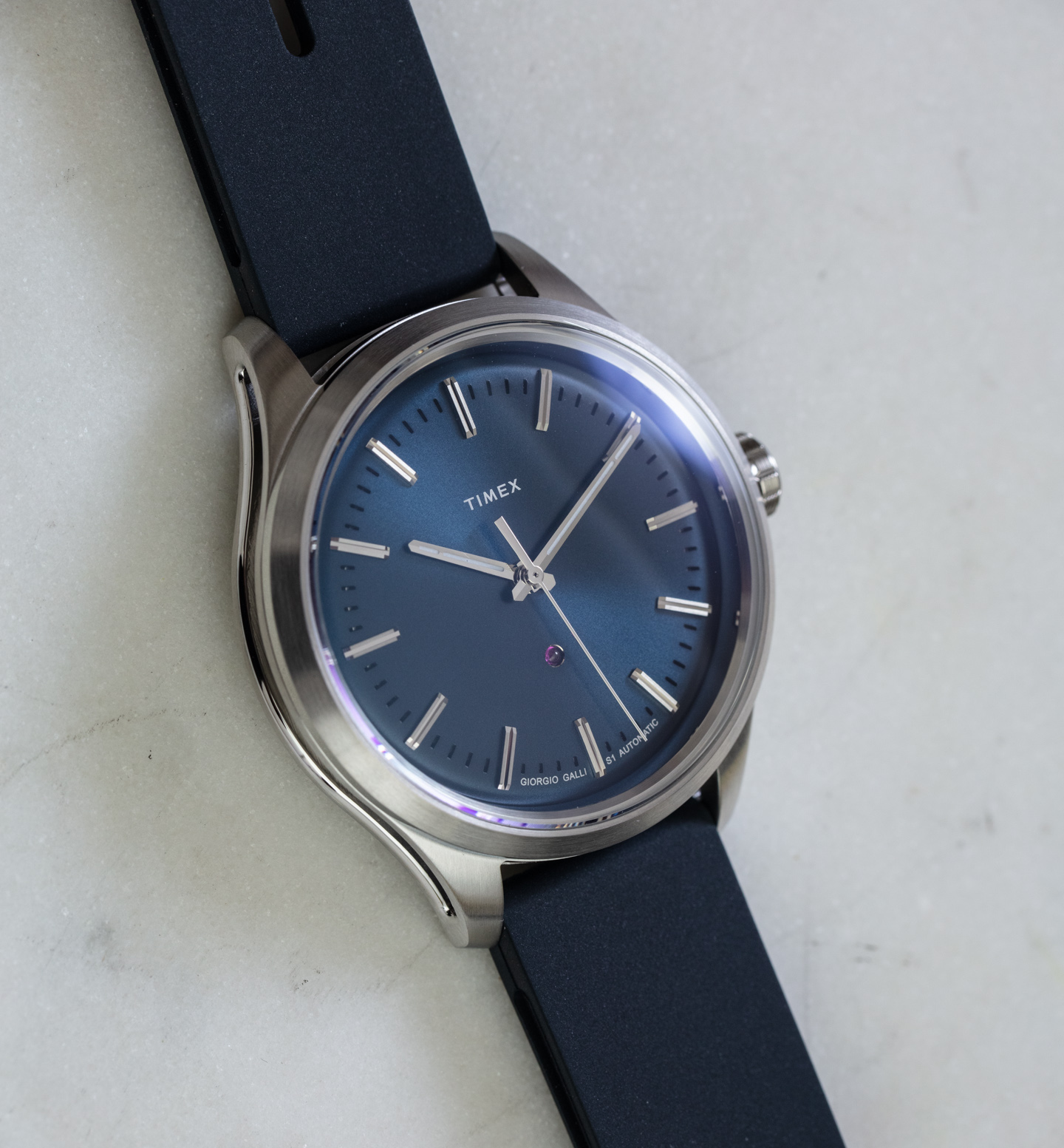 Over the dial is a sapphire crystal, and the cases are water-resistant to 50 meters. In the crown is a flat black-colored cabochon that is a classy, modern touch. The S1 38, like the S1 41, has the timepiece’s excellent strap system that feels similar to the material of the Apple Watch sport band. Timex calls it a “soft synthetic rubber,” and it is far superior to silicone straps. The strap appears to be standard, but the end part has a small button that clips into the trench running down the middle of the strap. This open gap is not only stylized to look like the skeletonized movement but also ensures that the strap end never protrudes unattractively. This is the practical fashion designer side of Mr. Galli coming out, and we should all thank him for this authentic innovation.

The straps come with quick-release ends, and Timex sells additional colors for $75 each – though at this time they only seem to sell additional S1 straps for the 20mm wide lugs of the 41mm wide Galli S1 model. The 38mm wide S1 seen here has 18mm spaced lugs and thus uses a slightly narrower strap (which otherwise looks the same despite being 18mm wide). The Timex straps are cool enough that I would encourage others to try them out on other watches with compatible 20mm-wide lugs. (I believe both the Giorgio Galli S1 38 and 41 watches use 20mm-wide straps.) 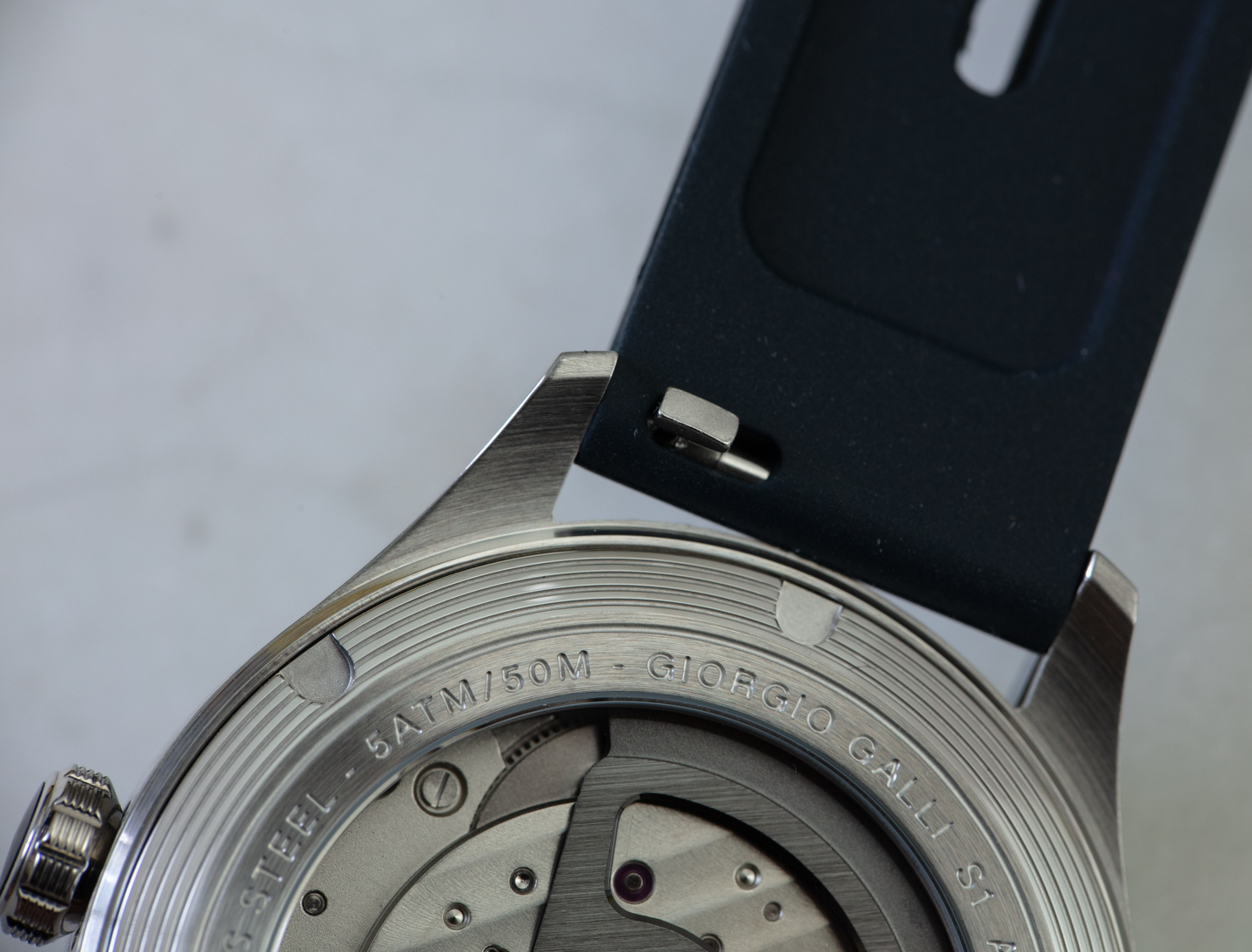 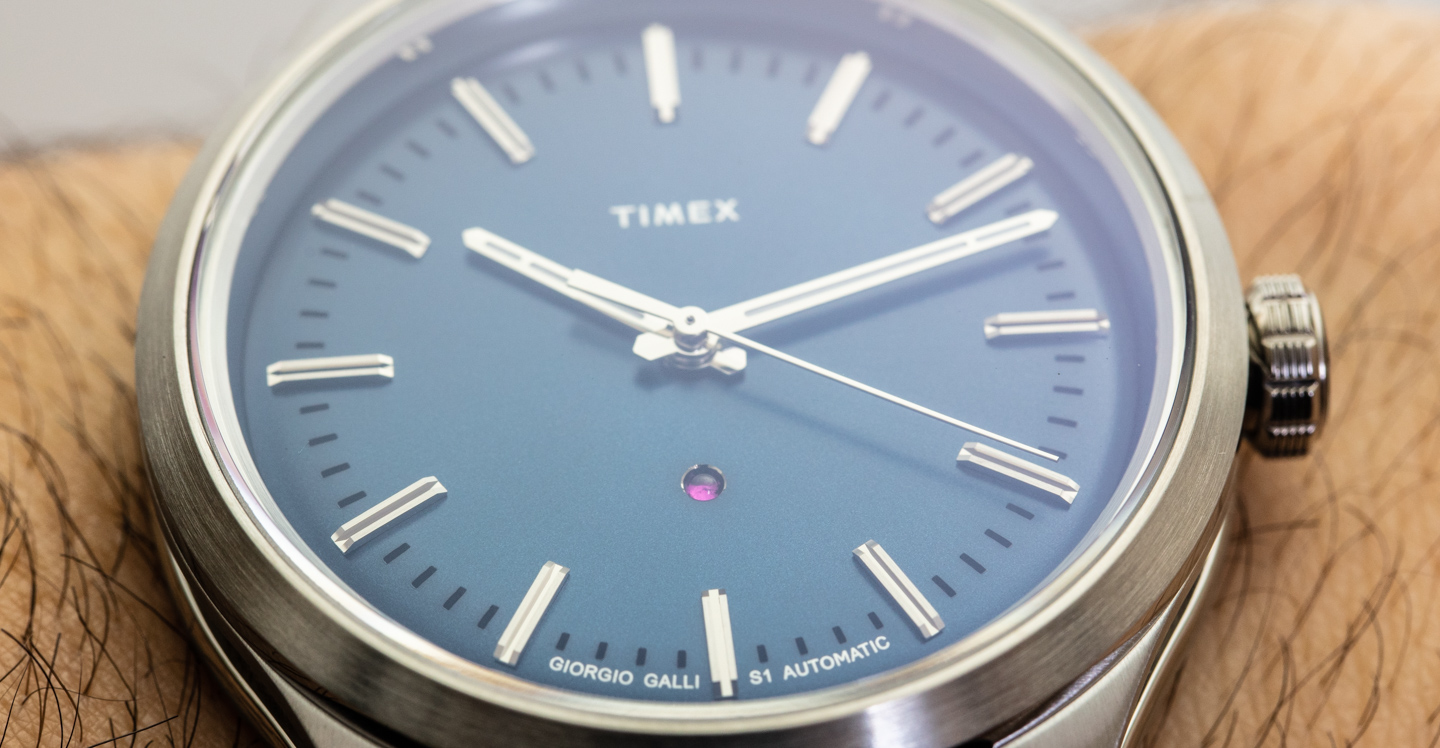 At this time, the Timex Giorgio Galli S1 38 and 41 watches are still a bit hard to get. They aren’t limited editions but are produced in relatively small batches and the Timex website is updated from time to time. At the time of this writing, all of the S1 38 watches were sold out with an option to join a waitlist. The only piece available to buy was the silver-dialed version of the S1 41 that was out of stock for a long time. The good news is that Timex seems happy to keep producing S1 watches so long as there is demand. The entire concept is a bit of an experiment (price, design, and totally direct-to-consumer sales model) for the larger watchmaking group. So far, it has proven to be successful. Price for all versions of the Timex Giorgio Galli S1, including the S1 38 watch, is $450 USD. Learn more at the Timex website here.