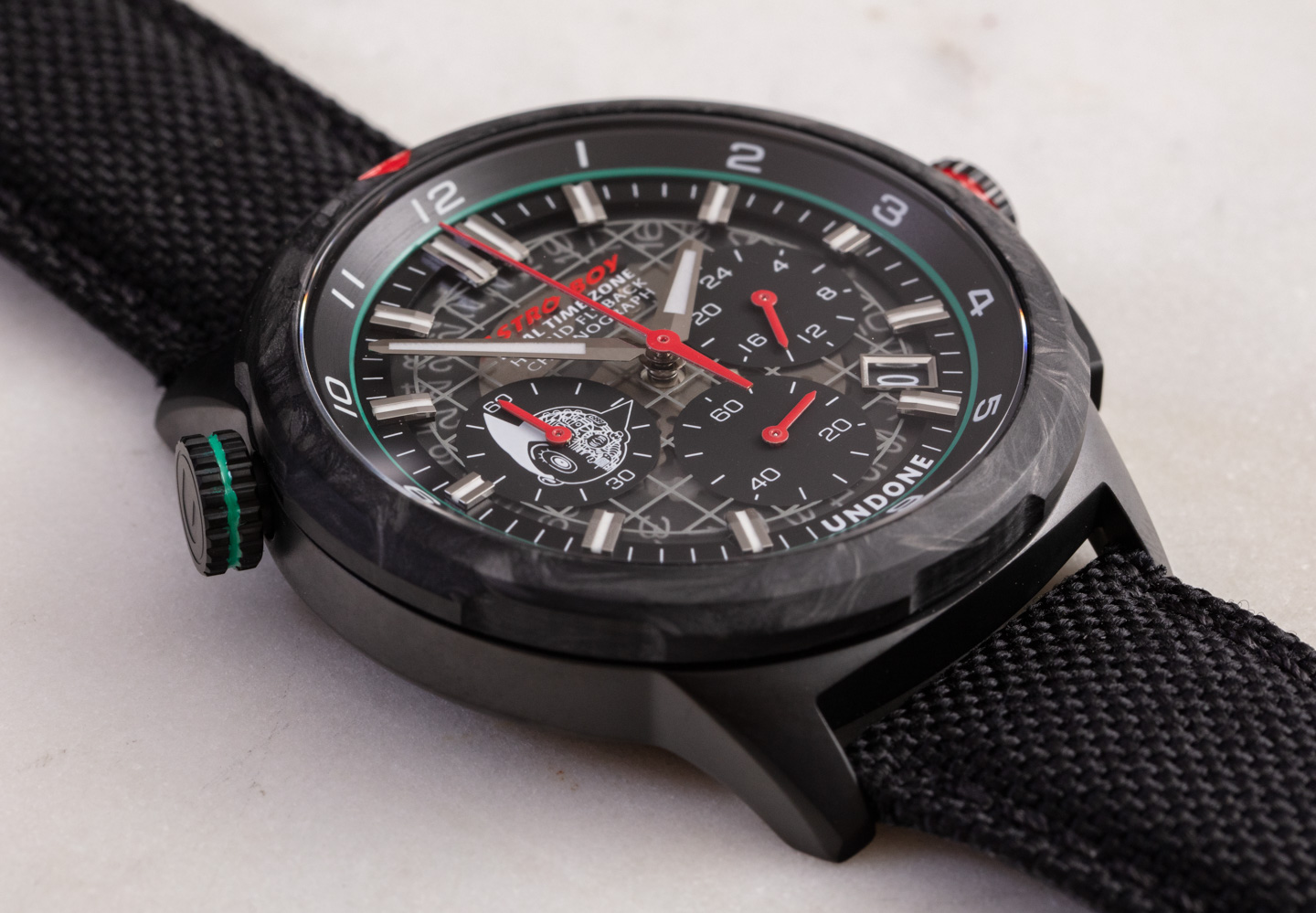 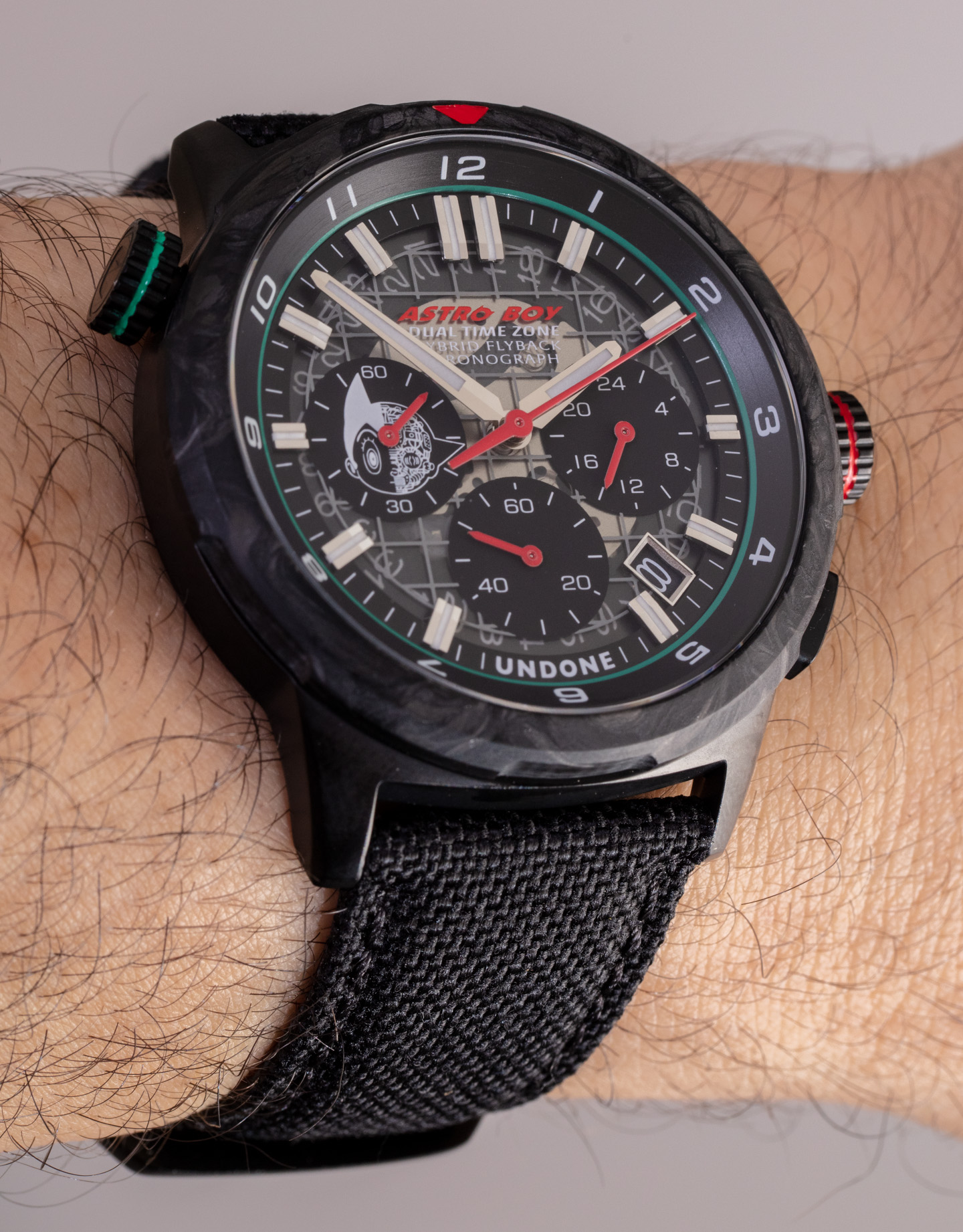 The UNDONE Astro Boy watch is a limited-edition homage to the famed Japanese comic and cartoon created by the co-founder of UNDONE, Michael Young. Michael grew up in Hong Kong watching Astro Boy and considers him to be among his favorite childhood characters. Mr. Young isn’t alone. Since it debuted in the early 1950s, Astro Boy has been widely syndicated around the world (although it didn’t officially make it to the United States until much later) and is referred to by many as the spiritual birth of the anime genre (which was also called “Japanimation” when I was growing up). The timepiece itself pushes the limits of what UNDONE can offer at an affordable price point, and is also an interesting evolution on the “inspired-by” timepiece product that UNDONE has been so prolific at creating since its inception just a few years ago.

Like Mr. Young, I grew up with a lot of Japanese culture and children’s entertainment even though I didn’t grow up in Japan. Lots of Japanese games, cartoons, toys, comics, and more were an integral part of my childhood in Los Angeles, and it has helped me later find things in common with others who were equally compelled by what are probably some of the greatest toys and characters for children created in our modern times. Hong Kong is a place where people growing up there had an even closer connection to Japanese products and culture. Astro Boy was officially syndicated in Hong Kong, as was a lot of other Japanese entertainment that Young probably grew up with. This helps explain why, even though UNDONE is a brand based in Hong Kong, so many of its more specialized products are inspired by things from Japanese culture (both new and old). 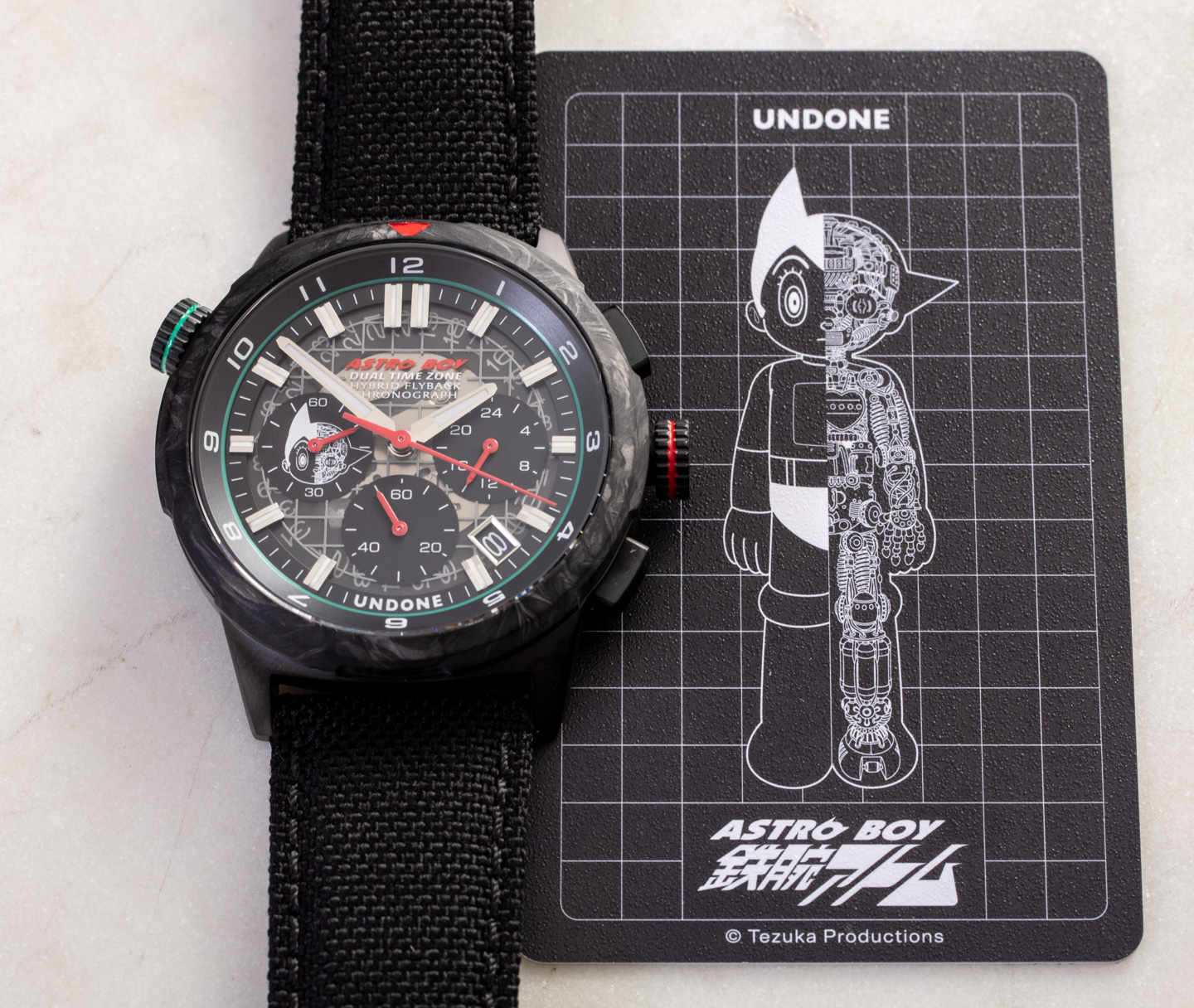 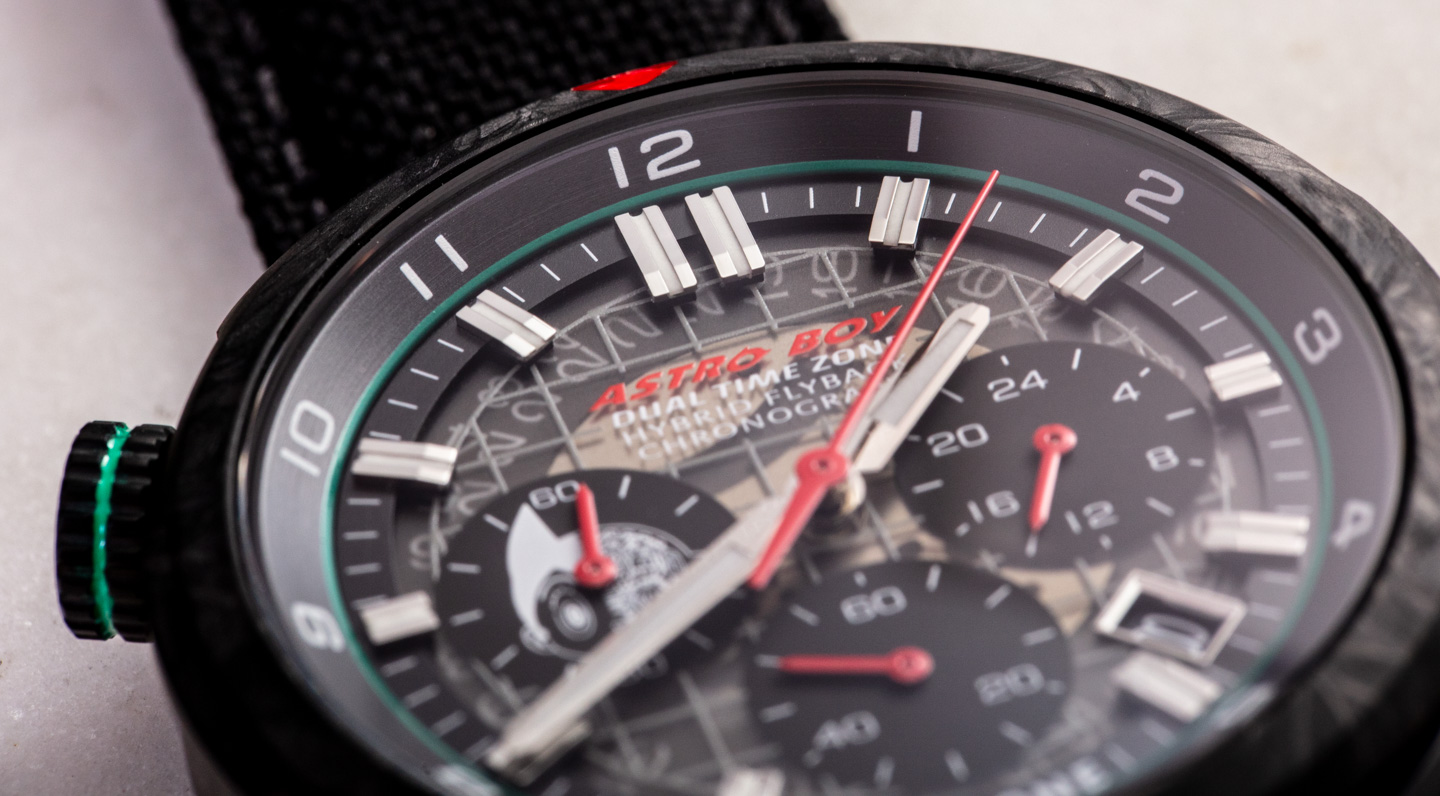 From a design perspective, the UNDONE Astro Boy watch is very cool, in my opinion. UNDONE didn’t just slap some Astro Boy imagery on an existing product but rather really worked to create something new and interesting. This is also the first time (that I know of) where forged carbon makes its way into an UNDONE watch. It shows up in the form of a bi-directional rotating outer bezel. The watch even has an inner rotating bezel that can be used not just for timing purposes but also to indicate the time in a second time zone. The outer bezel is moved with your hand, while the inner bezel ring is rotated using the crown located at the 10 o’clock position on the case.

The watch is inspired by a power that Astro Boy has: x-ray vision. In the Osamu Tezuka-created story, Astro Boy is an android created by a scientist who lost his biological son. In a lot of ways, Astro Boy dealt with issues that society wouldn’t really think about until decades later including the limitations of artificial intelligence, what it means to be human, dealing with machines that may have emotions, and struggles of a post-war culture coming to grips with human sentimentalism and the promise/problem of ever-increasing industrialization on the human condition. Astro Boy is a robot boy with real feelings, and in some ways was a thematic extension of Pinocchio, for a more modern era, and with some different themes. What made Astro Boy interesting from an anime perspective is that it set the stage for a future of Japanese animation very much interested in machinery, futurism, the responsibility of great power, and overcoming seemingly monolithic enemies. 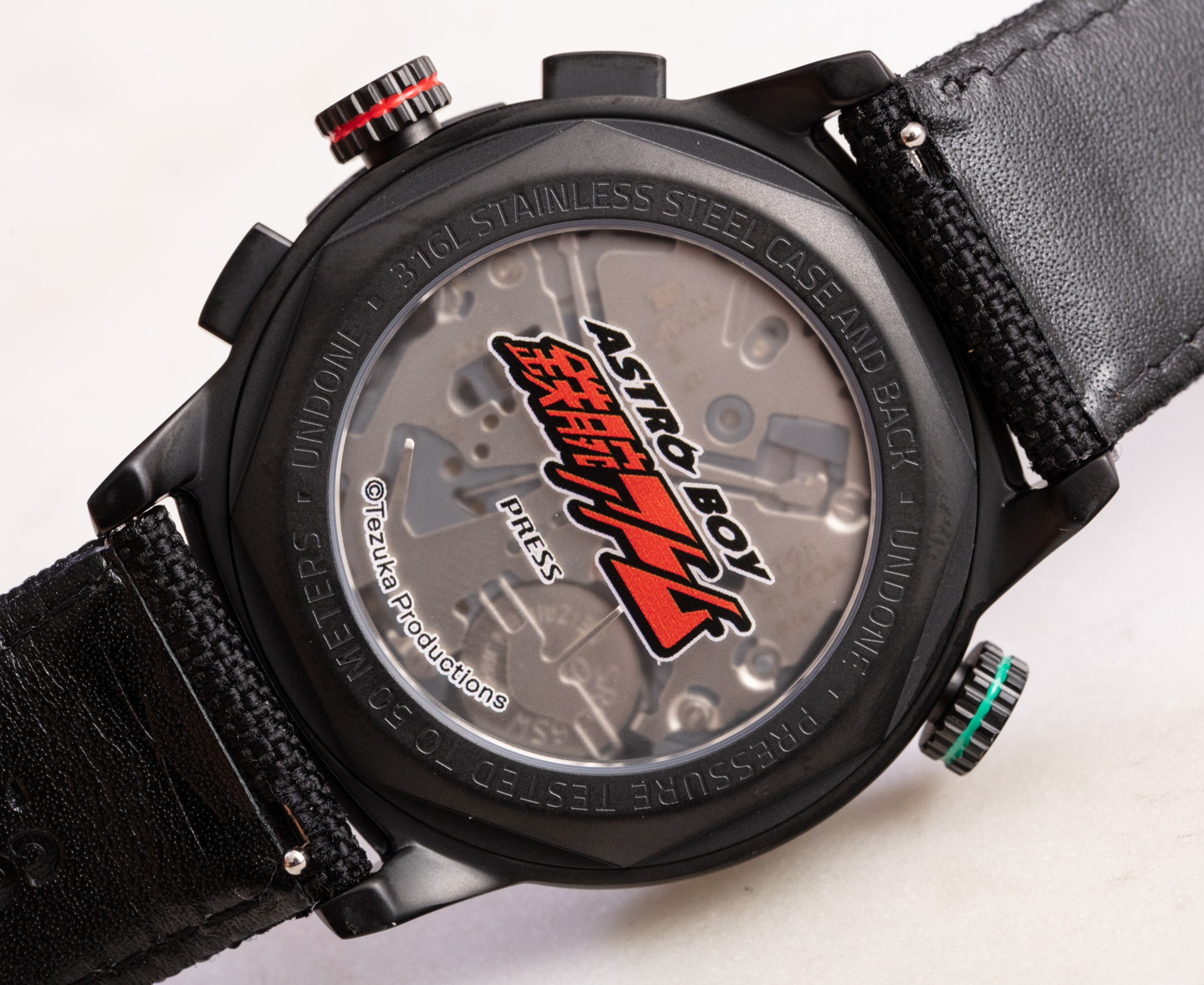 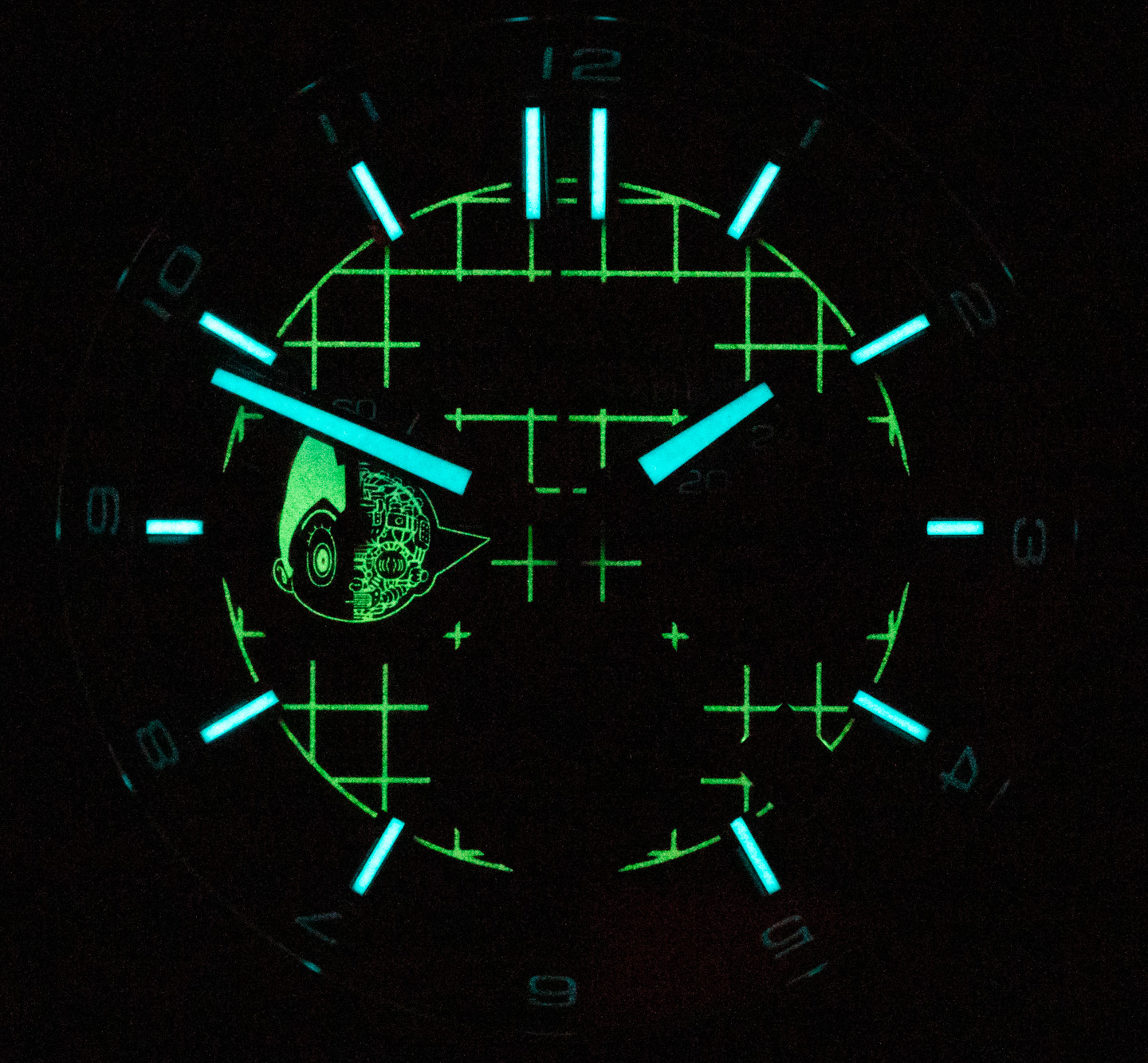 Astro’s x-ray vision inspired a semi-skeletonized dial along with some artistic motifs of Astro boy with a partially x-rayed face. This concept fits in perfectly with the modern trend of skeletonization in wrist watches. That means that, while the visible dial and movement through the caseback fit the x-ray theme, they would be just as fitting on a timepiece these days minus an x-ray theme. That said, the view of the electronic movement inside the UNDONE watch feels especially salient given that this product is Astro Boy-themed. 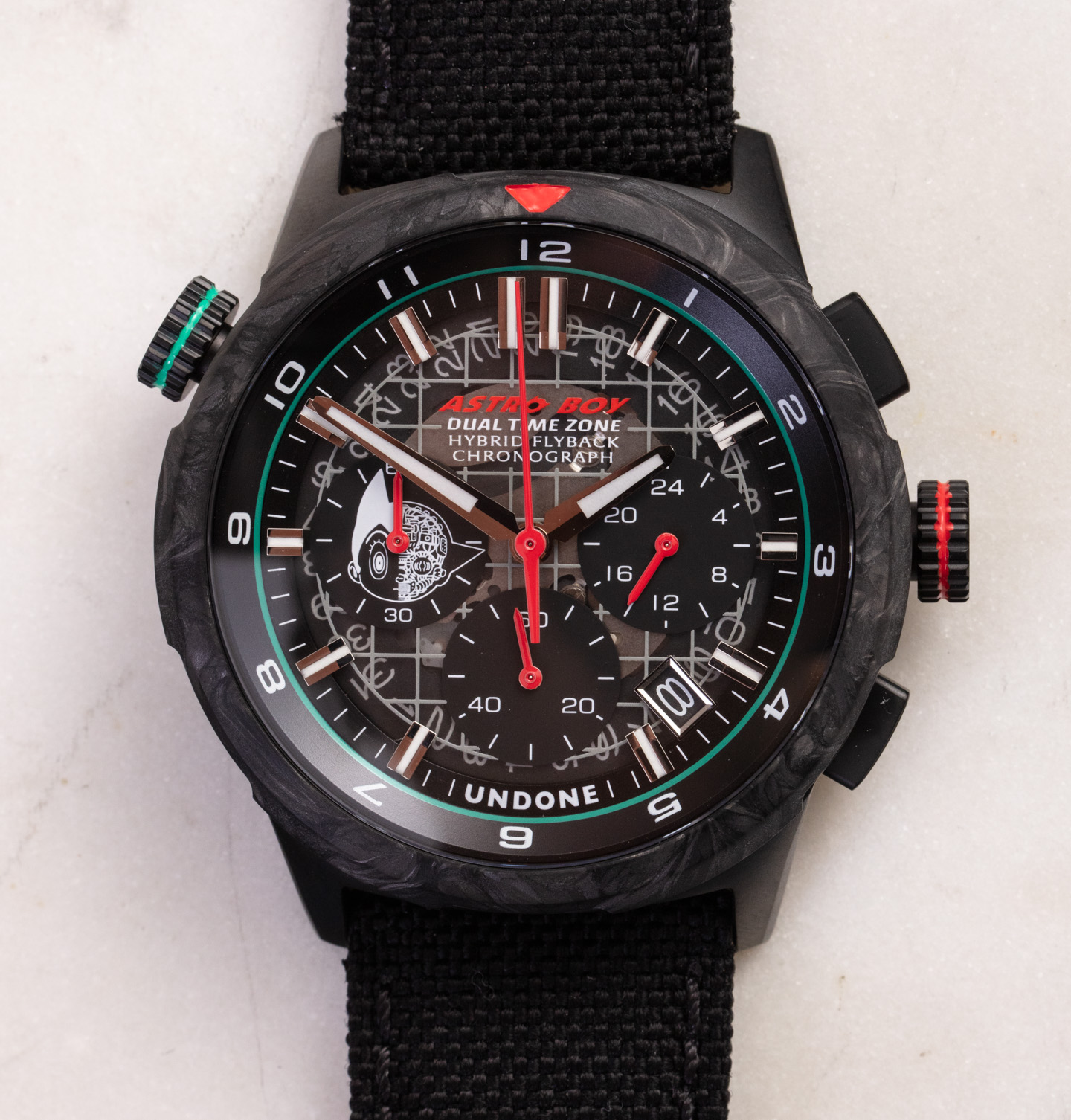 Aside from the stealthy black colors of the watch, it is accented with green and red to match the colors of Astro (who only wears underwear and boots). The case is in mostly steel and 42.5mm-wide coated in black-colored DLC. As I said before, the bezel is produced from forged carbon, and the overall case is 12.1mm-thick with 50 meters of water resistance and a sapphire crystal over the dial.

Inside the watch is (fittingly) a Japanese-made Seiko Instruments VK63 quartz movement that has a mechanical (versus electric) motor-operated 60-minute flyback chronograph system. The dial also features the date, a synchronized 24-hour hand (AM/PM) indicator, very legible hands, and applied hour markers. The lume view of the Astro Boy dial is truly fantastic, even though you need a good amount of light (a few minutes of sunlight would do it) to show off all the little lume-painted details. 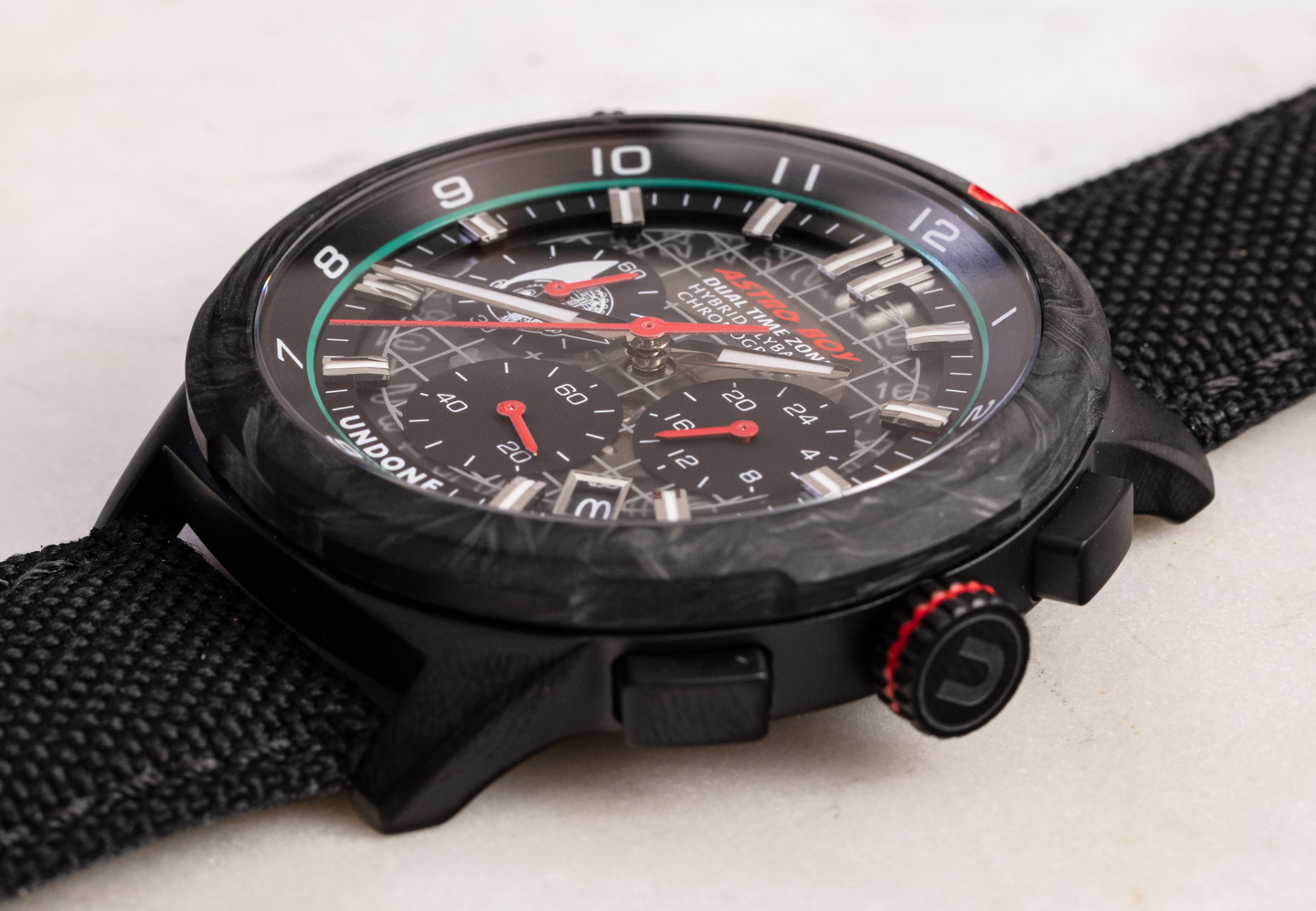 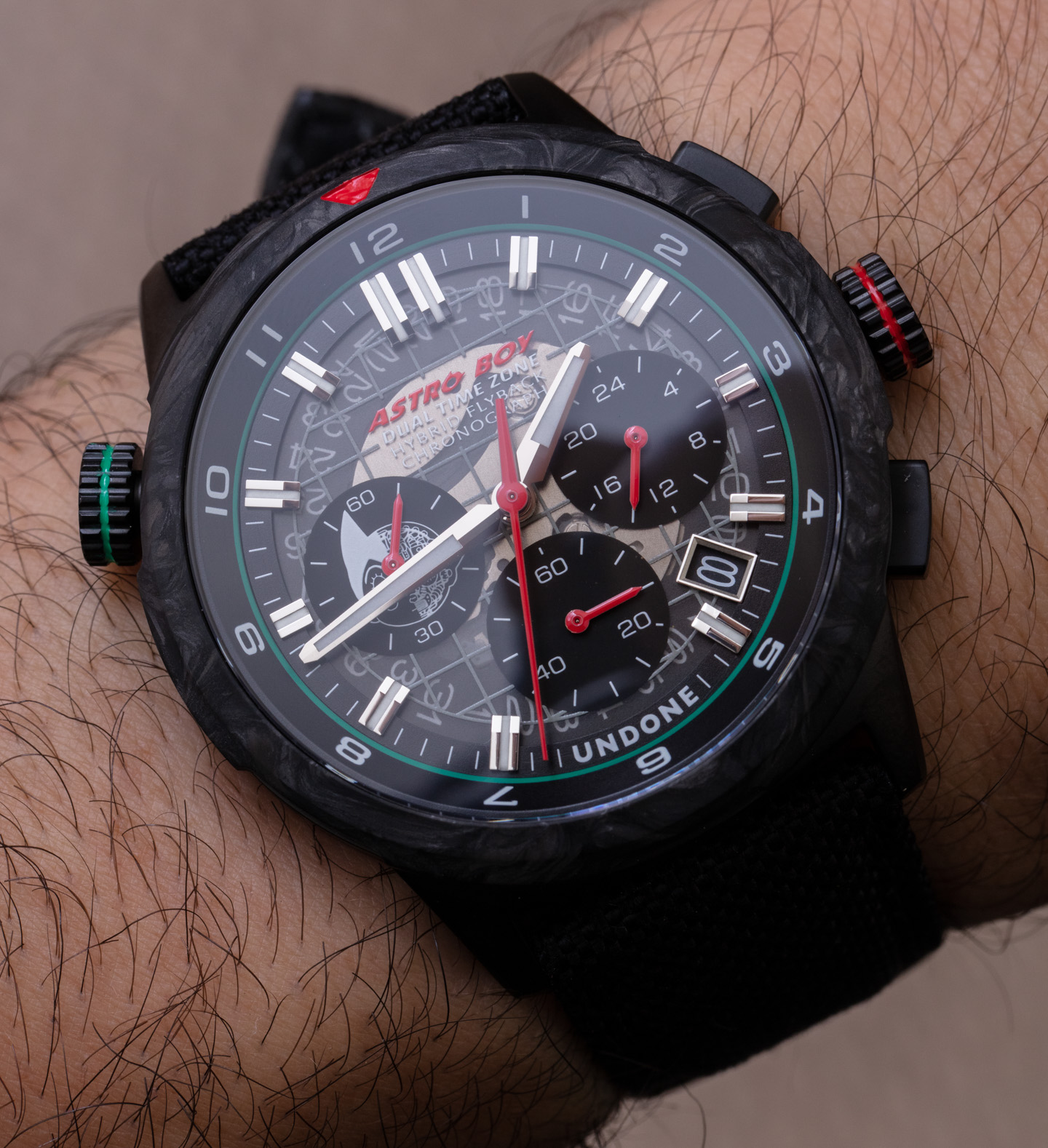 What makes the UNDONE Astro Boy watch so interesting to me is how important the creation of it was to Michael Young. It is one thing to take a licensed entertainment property and make a souvenir timepiece out of it. This happens all the time in the modern wristwatch space. It is quite another thing to weave that entertainment property into a design that passes as a serious wristwatch and is wearable around other adults who might not have the same interest in the theme of the product. At the same time, anyone who does have a close relationship with Astro Boy can fondly have nostalgic feelings each time they glance at their wrist. That’s the real value here, and the effort Young put into making that that a high-quality experience is apparent from the final result.