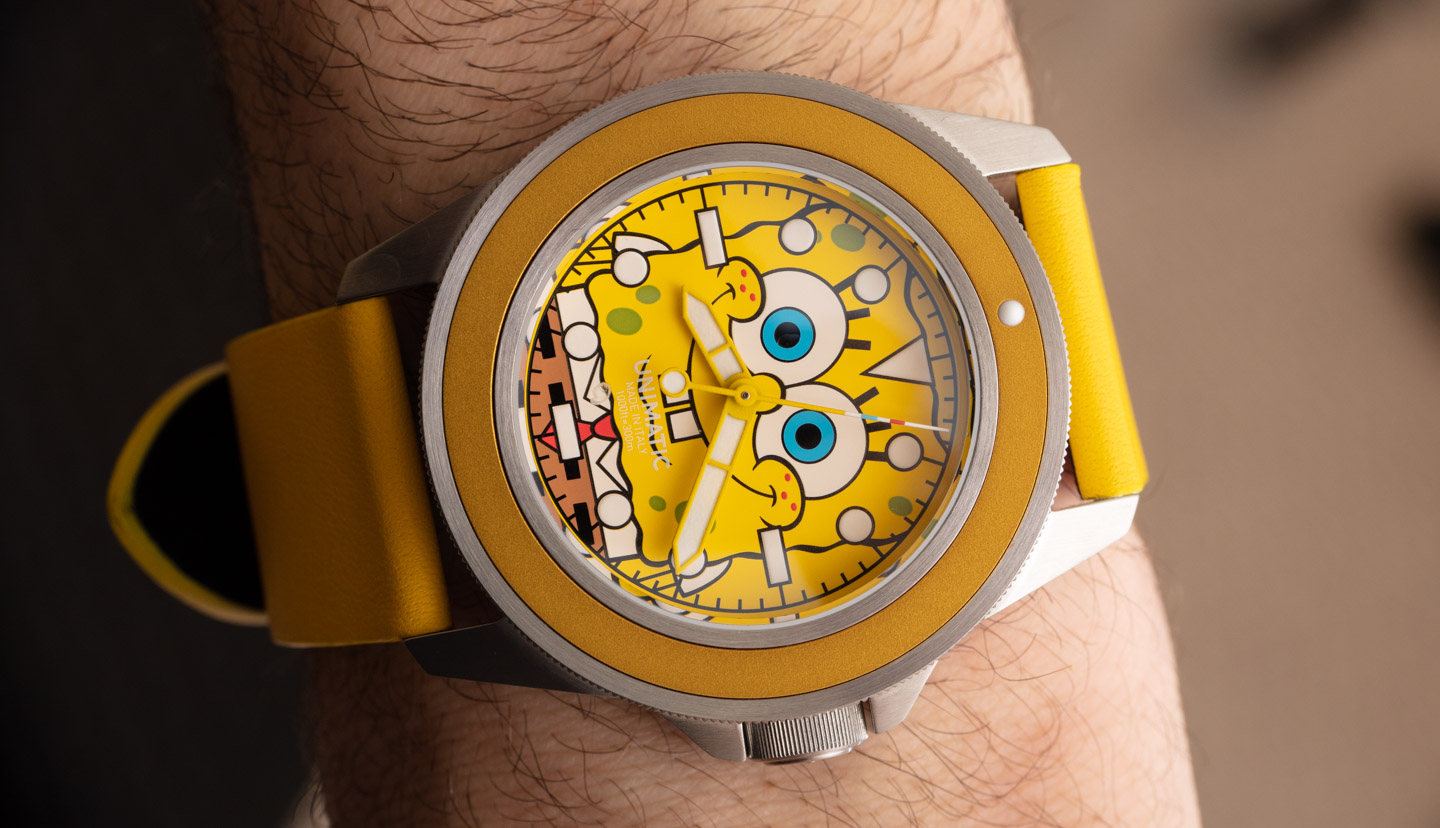 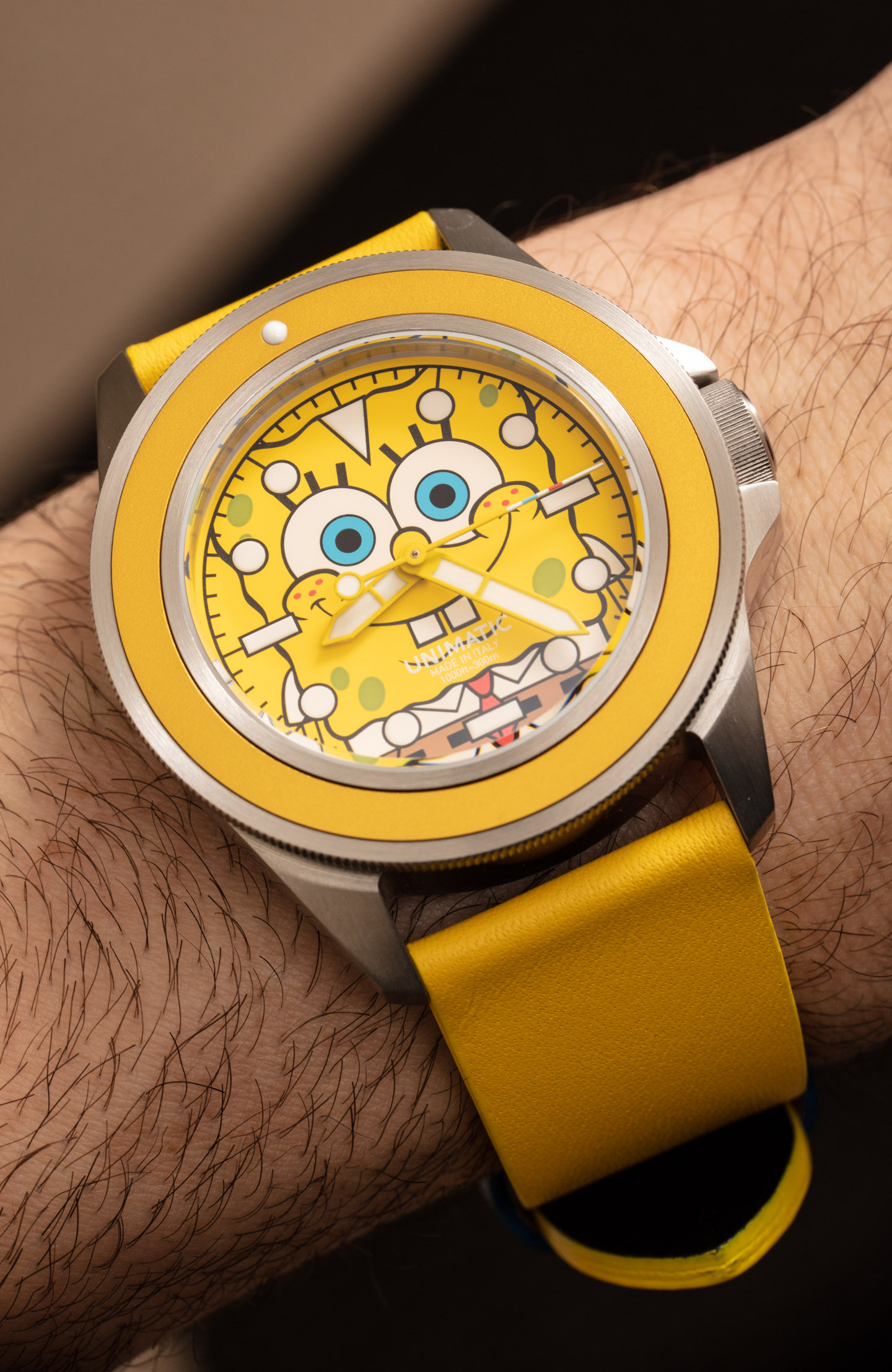 The most powerful effect a wristwatch can have on a wearer today is to make them feel happy when wearing it. A good test is whether or not you smile when you glance down at a wristwatch on your wrist. The new limited-edition Unimatic SpongeBob SquarePants II U1-SS2 watch satisfies this test because I immediately get a smile on my face when glancing down at the smile on my watch face. 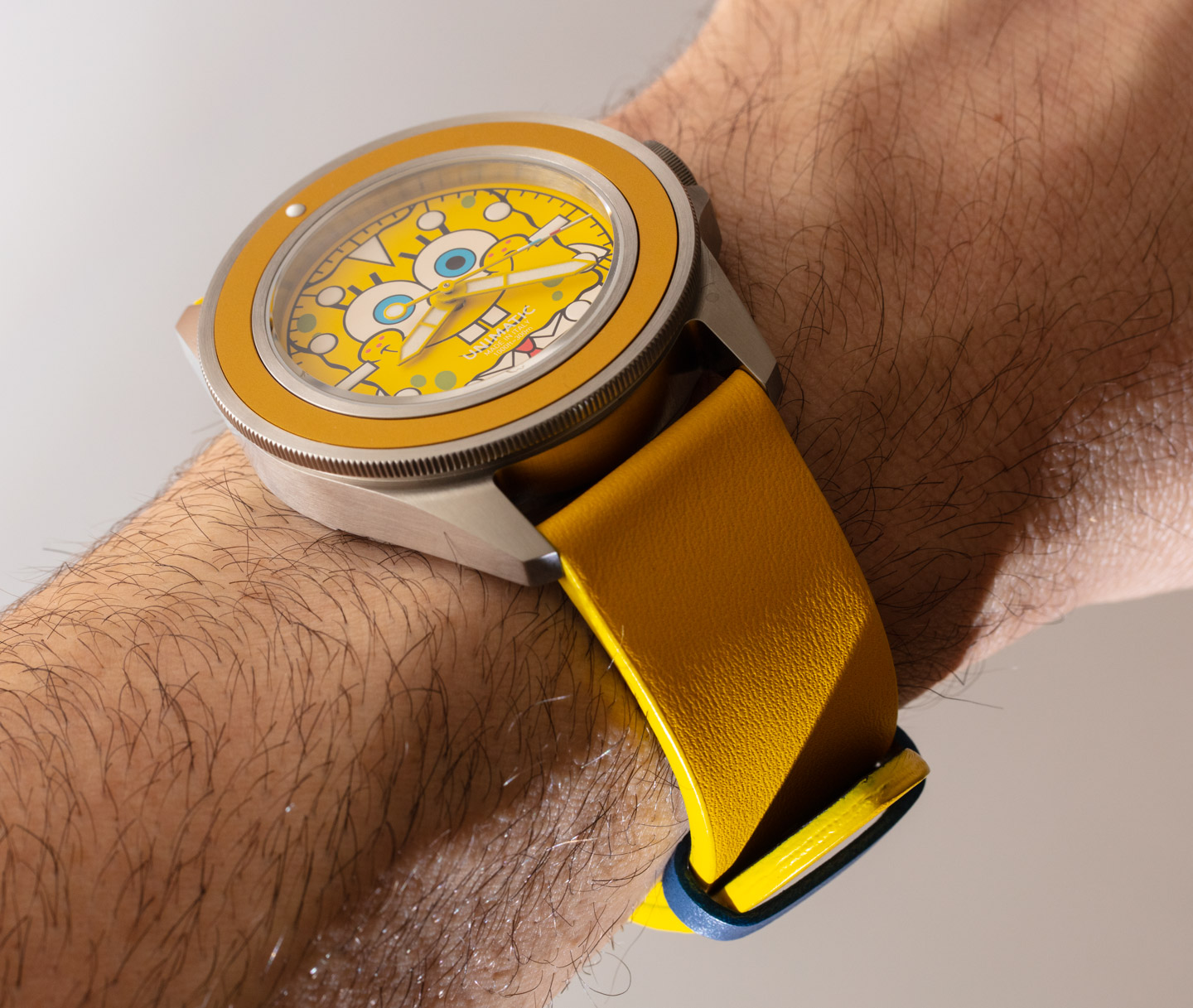 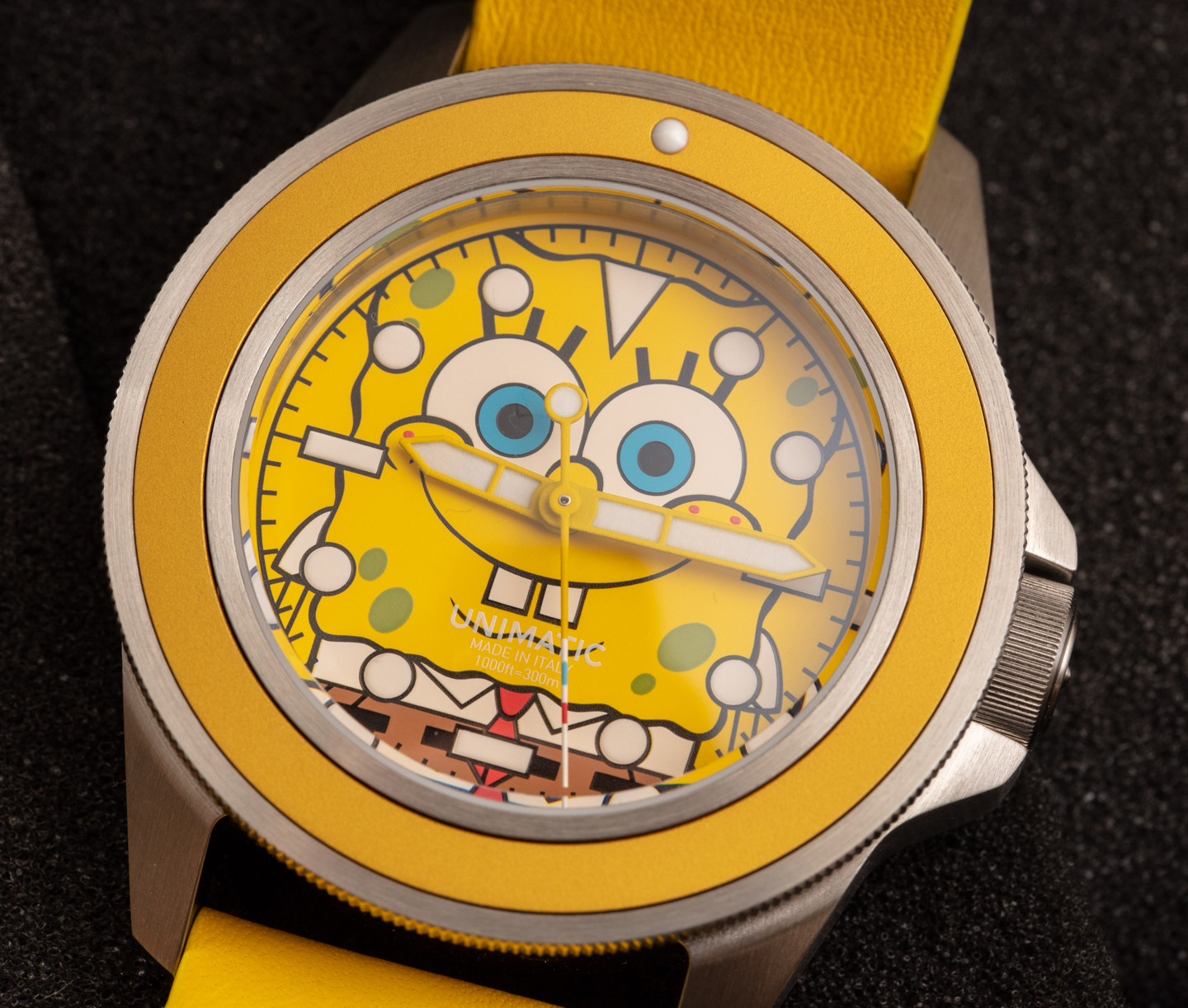 The two new limited-edition Unimatic SpongeBob SquarePants watches are the reference U1-SS2 (in yellow as seen) as well as the U1-SS3 (in black). Each is available as a limited edition of just 100 pieces. At this time the U1-SS2 watch is sold out, but the black U1-SS3 is still available for sale in very limited quantities.

Collaboration watches are the hottest thing in the wristwatch market – especially when an otherwise competent tool watch is “painted” with a fun and whimsical skin. That is almost exactly the case here as the core timepiece with SpongeBob SquarePants skin is a 40mm wide (41.5mm wide with the bezel) steel-cased diver’s watch with 300 meters of water resistance and a 2.5mm thick AR-coated sapphire crystal. The case is 13.6mm thick. 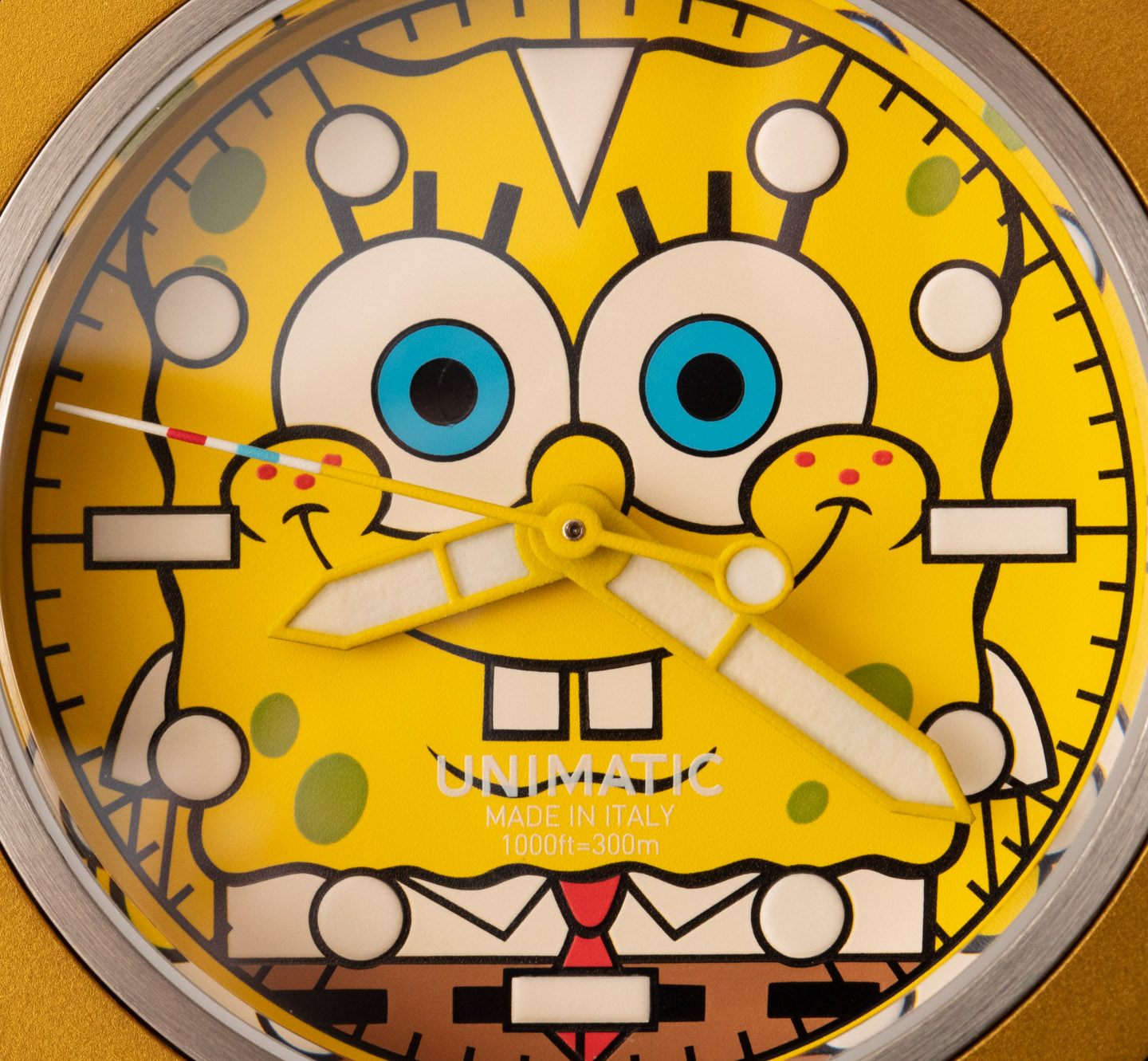 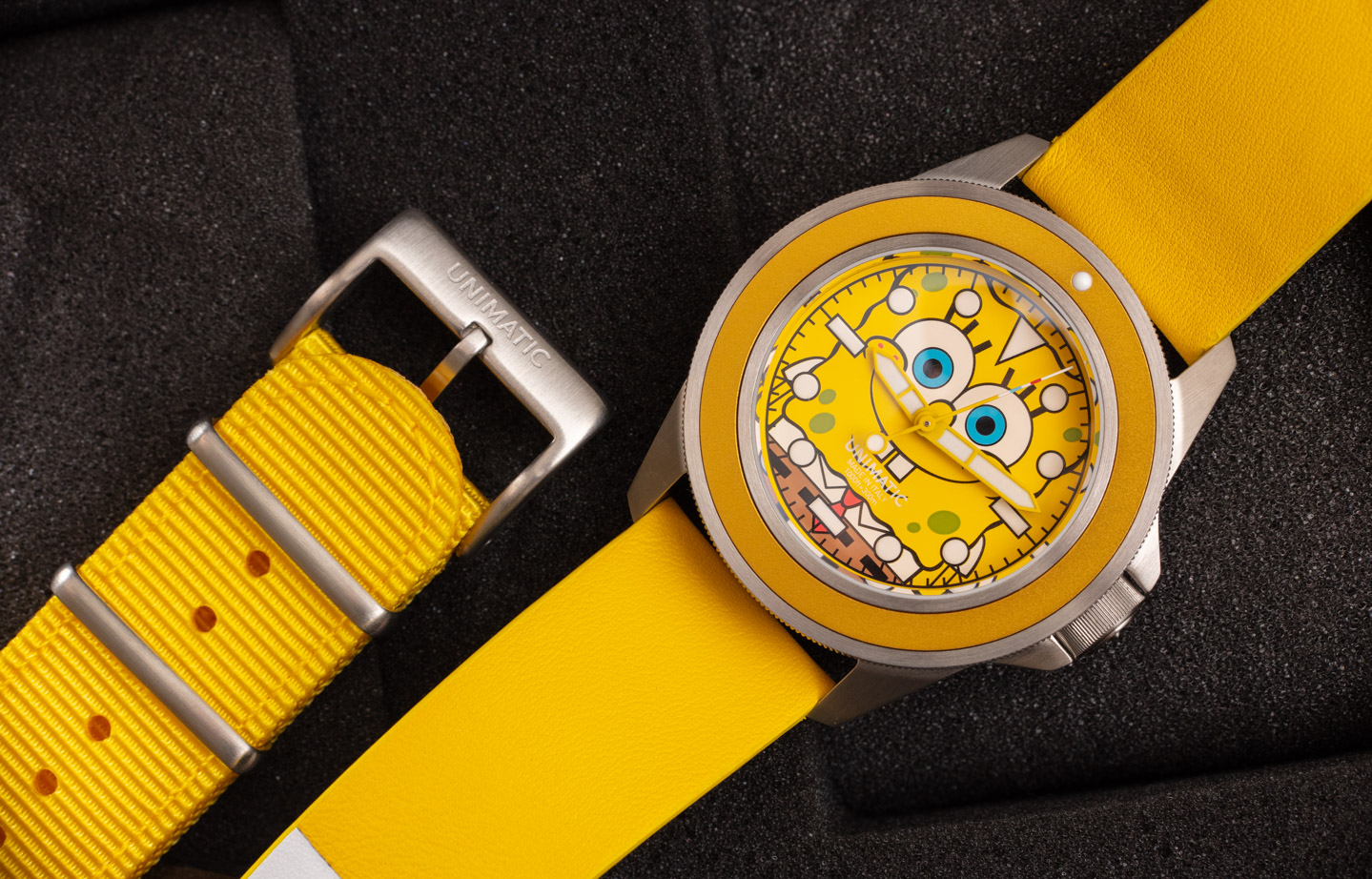 Unimatic’s core theme is a sort of minimalized, fashion-themed version of the iconic Rolex Submariner – but I would not call the two watches competition given Unimatic’s very different (and more affordable pricing). Inside the watch is a Japanese-made Seiko Instrument caliber NH35A automatic movement which operates at 3Hz with 41 hours of power reserve.

How did this tool-style diver’s watch get the SpongeBob SquarePants treatment? First is the yell0w-color theme which Unimatic did rather watch. The dial of the watch is the face of SpongeBob SquarePants himself, with the normal hour markers and hands (both lume painted) placed as normal. Legibility is actually much better than you might suppose given that the watch face and cartoon face certainly compete with one another for attention. 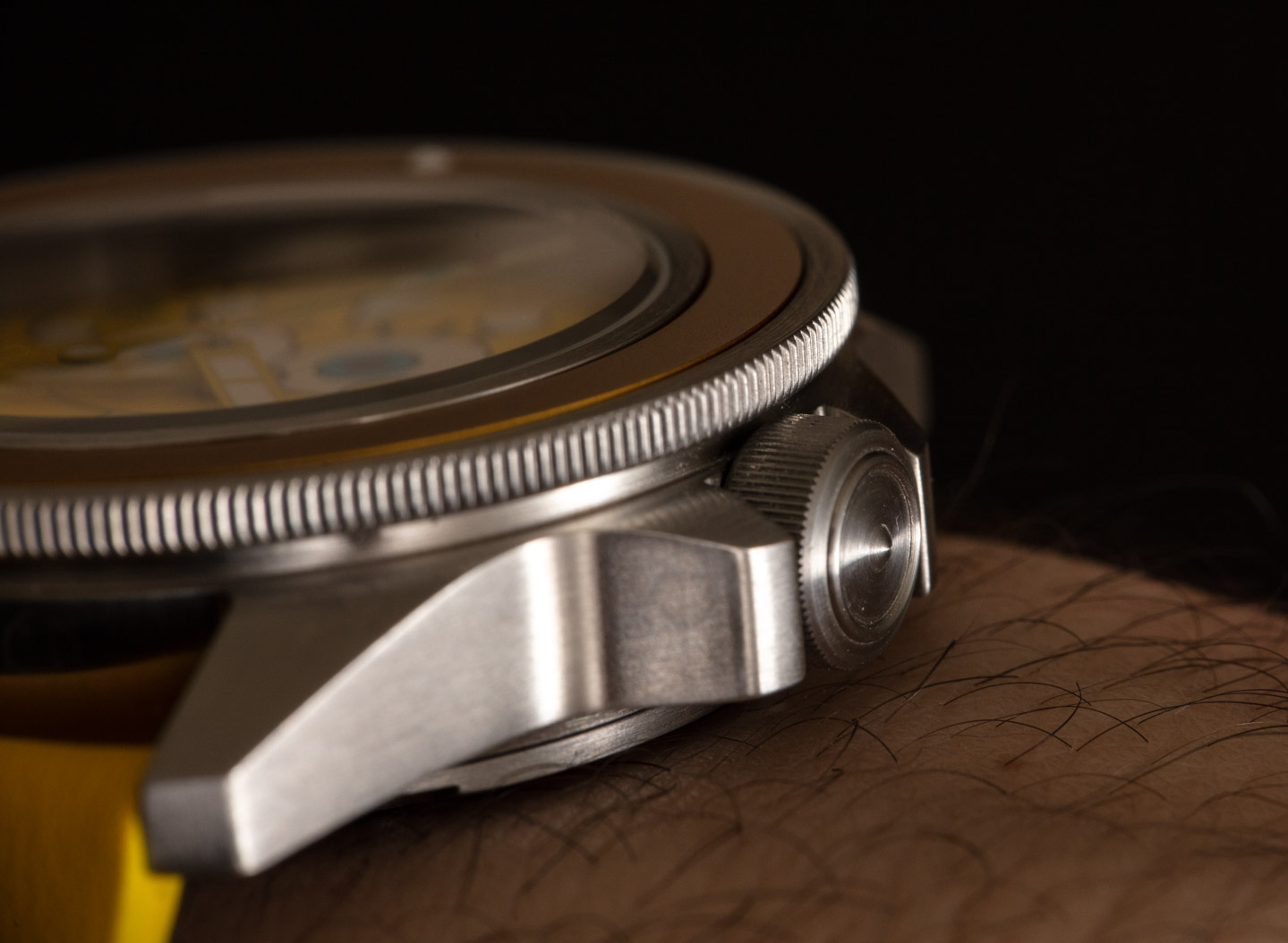 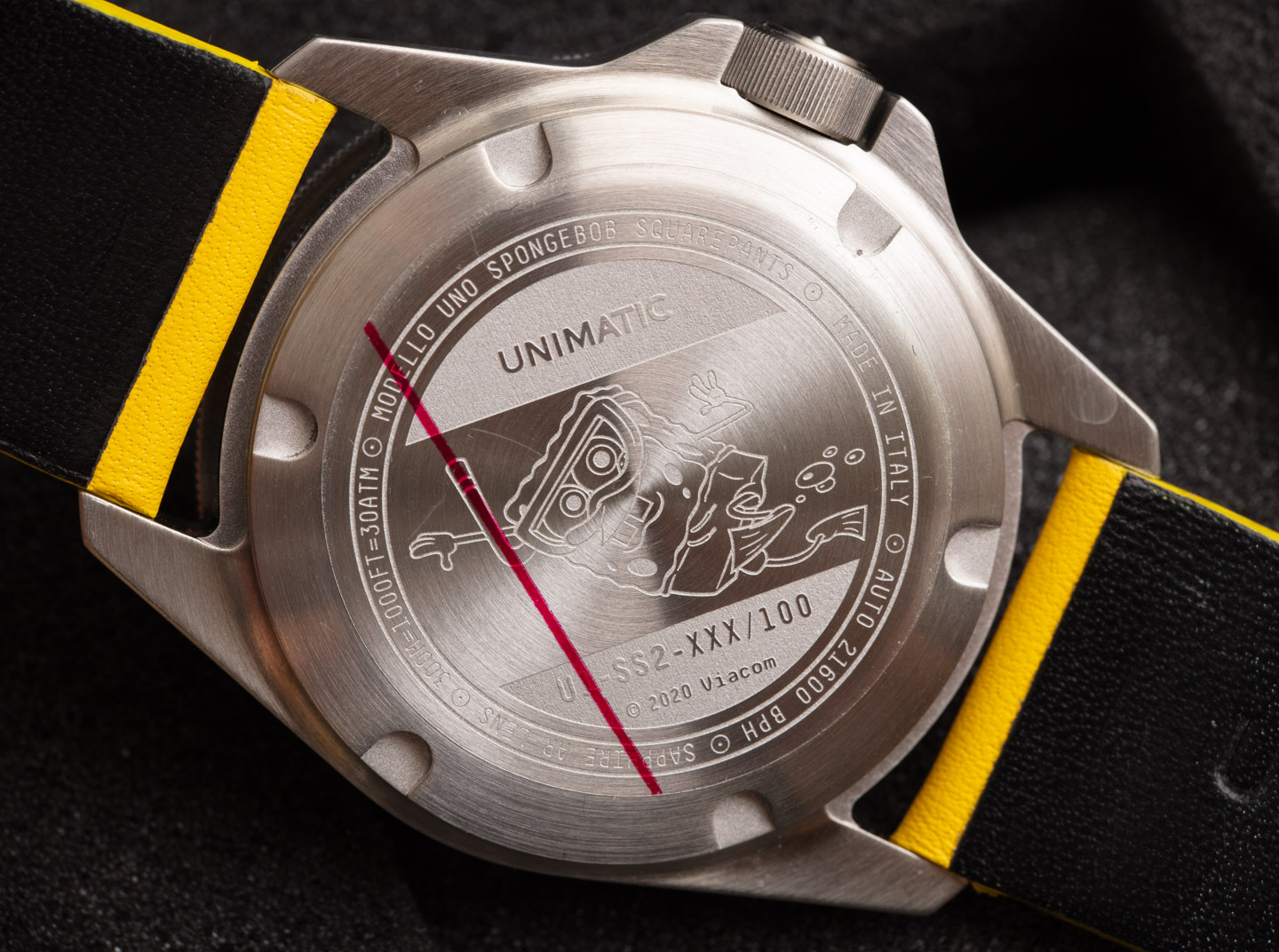 Unimatic did their best to offer a matching yellow color for the uni-directional rotating bezel. Fitted with just one dot for luminant, the otherwise clean bezel has a yellow-toned anodized aluminum insert. The color ends up being a sort of metallic gold color, which is about as close to the proper shade of yellow that one can achieve using a color anodization process. Don’t forget to look on the rear of the watch which has a diver motif of SpongeBob SquarePants, which is, of course, somewhat ironic since the character is supposed to live under the ocean in Bikini Bottom — and so is presumably always diving. Then again, the cartoon itself seems to waffle around with the science as envisioned by things such as having fires under the sea.

Attached to the U1-SS2 watch is a custom yellow leather strap, which has some blue, white, and red segments design to look like SpongeBob’s socks. The strap is actually put on “upside-down” which is part of the theme but also helps make the watch fun and quirky. Unimatic supplies a secondary strap with the watch, which is a nylon Zulu strap (similar to NATO-style straps but they come as two pieces like traditional straps as opposed to one-piece). 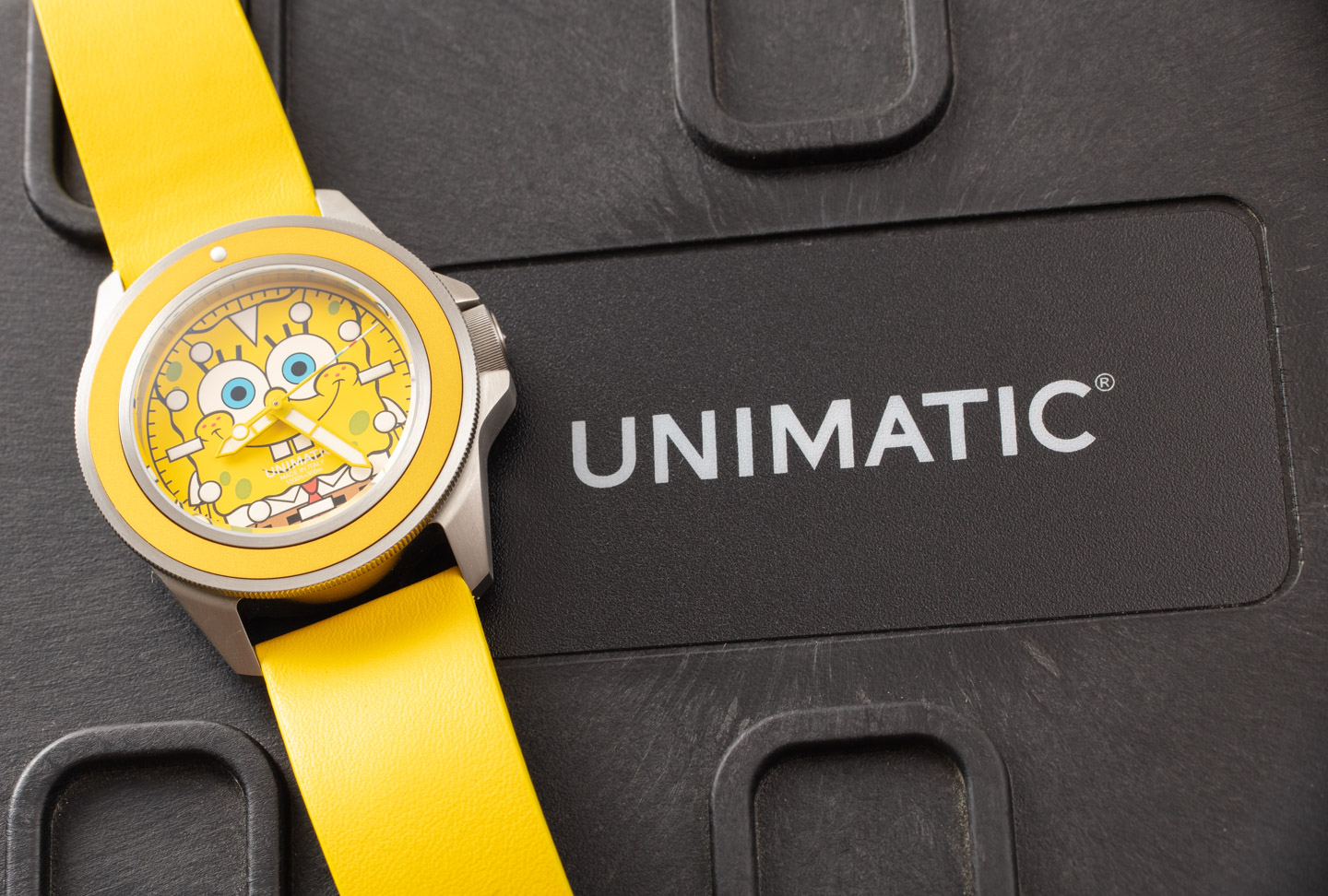 Since SpongeBob SquarePants creator Stephen Hillenburg passed away a few years ago, the legendary status of the entertainment franchise has only continued to mature. Given the cartoon’s appeal to both children and adults (through typically clever and humorous writing), SpongeBob SquarePants will have pop culture relevance for many years to come. Watches like the Unimatic SpongeBob SquarePants U1-SS2 and U1-SS3 watches seem simple, but actually represent very skilled ways of having a “cartoon watch” that nevertheless appeals to wristwatch collectors and enthusiasts. All we need next time are some actual square cases. Price for the limited edition of 100 pieces (each) Unimatic SpongeBob SquarePants II U1-SS2 watch is 700 Euros, while the U1-SS3 watch has a retail price of 650 Euros. Learn more or order at the Unimatic website here.