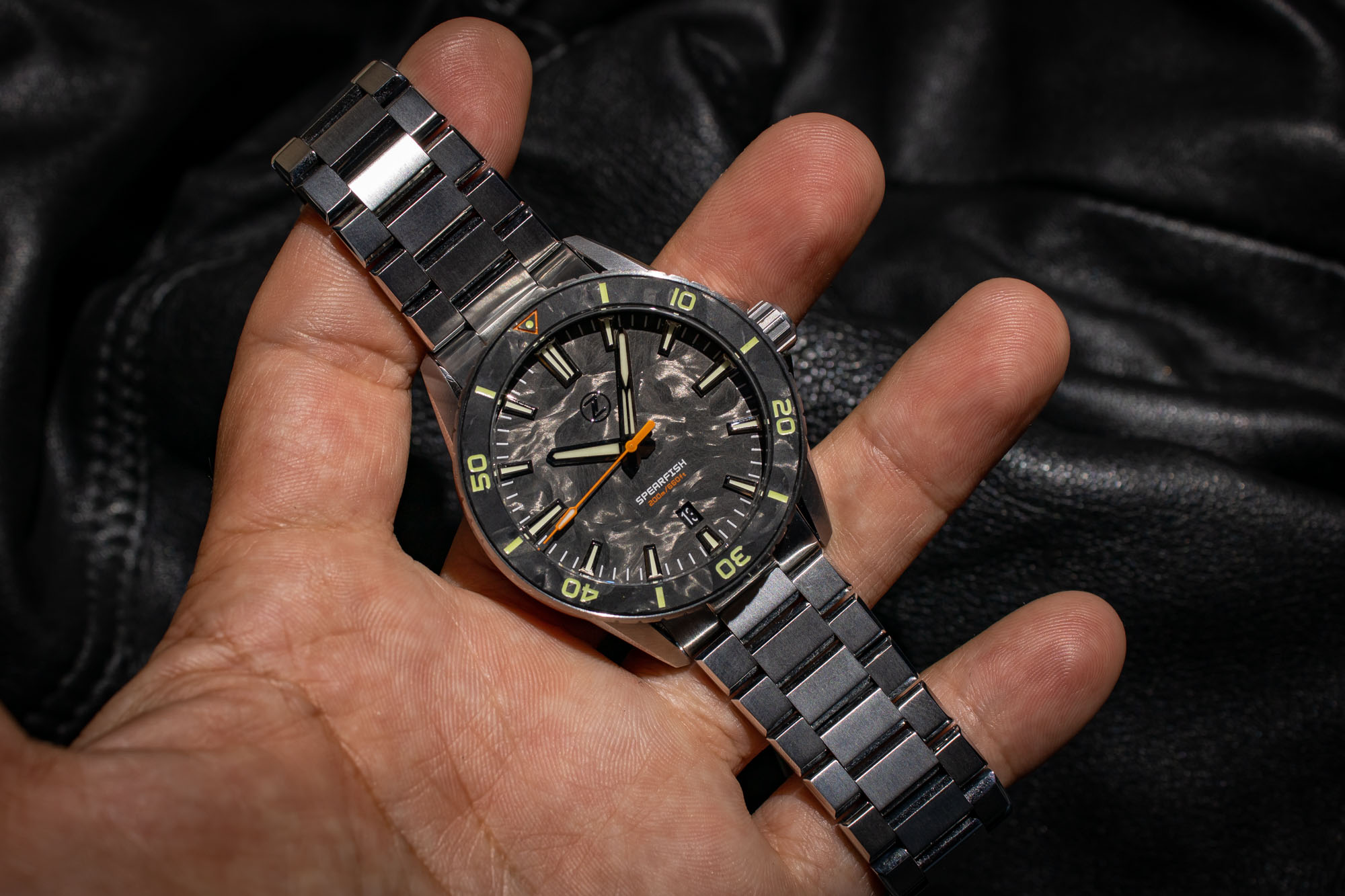 When it comes to the vast landscape of small-scale independent watch brands, not all options are created equal. Making a watch and making a good watch are two very different things, and while there are plenty of brands that really aren’t worth anyone’s time or money, some companies like Zelos offer some of the best bang for your buck when it comes to watches that can be purchased brand-new for under a thousand dollars. Founded in 2014 by Elshan Tang, who is a lifelong watch collector and enthusiast, Zelos has a strong following of dedicated fans, and it is one of those brands that you frequently see within the collections of those who own multiple watches that each cost thousands of dollars. Launched earlier this year in 2022, the Zelos Spearfish 40mm Diver builds upon the core design of the brand’s popular Swordfish dive watch with a more refined profile and a hardened stainless steel case and bracelet, plus a self-winding movement made by La Joux-Perret. 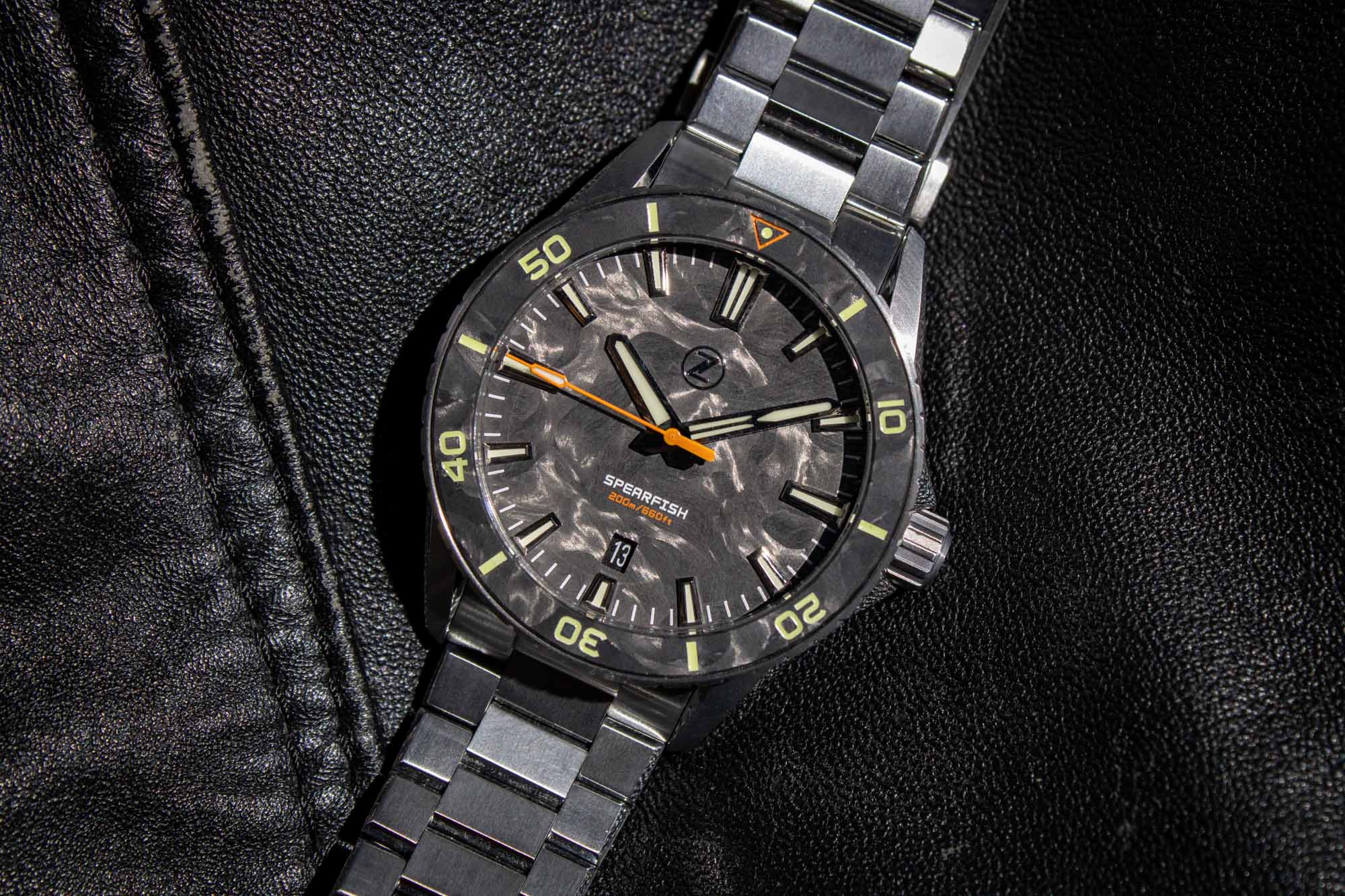 Available with a handful of different dial colors and fitted with bezel inserts that have either 12-hour or 60-minute sales, the particular version reviewed here is the Zelos Spearfish 40mm Diver “Forged Carbon” — and just like its name suggests, the watch is fitted with a forged carbon dial and a matching forged carbon bezel insert. Among the models that make up the greater Spearfish collection, this is the only version that features forged carbon components, and it is exclusively offered in a 60-minute bezel configuration. Despite their differences, all of the Zelos Spearfish 40mm Diver models feature cases and bracelets that are crafted entirely from 316L stainless steel with a surface coating that brings its hardness up to 1,200HV. The cases themselves measure 40mm in diameter by 11.5mm thick, which ultimately ends up being closer to 12mm once you factor in both the flat sapphire crystal sitting above the dial and the secondary sapphire display window that is set into the middle of the watch’s caseback. 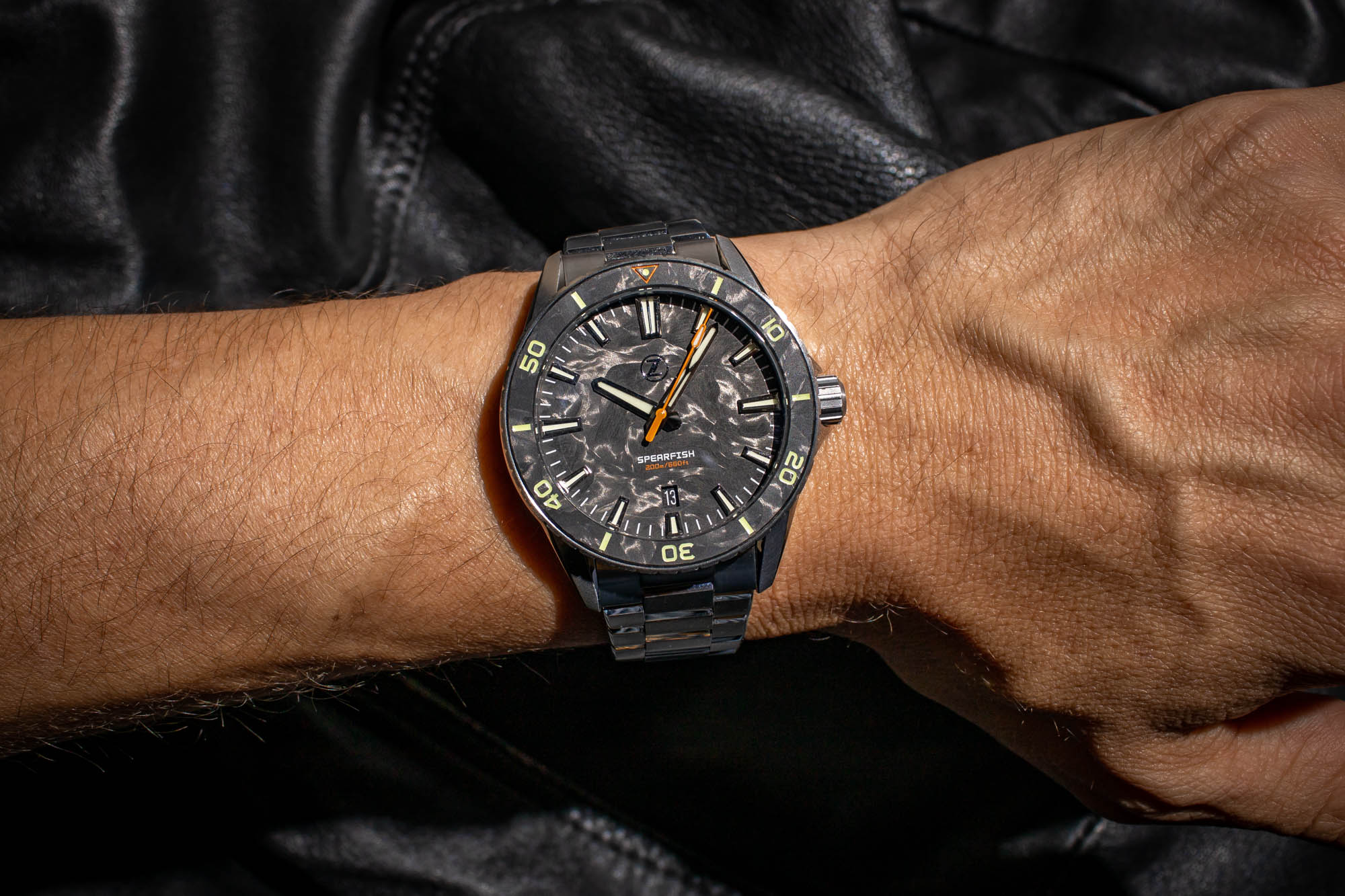 Featuring brushed sides and top surfaces, the lugs of the Zelos Spearfish 40mm Diver are set 20mm apart, and they feature polished chamfers running along their edges to create a strong visual highlight. Despite having a case diameter of 40mm, the lug-to-lug measurement remains a very manageable 47mm, and the bezel doesn’t hang over the sides of the case at all, meaning that the Zelos Spearfish wears noticeably smaller than many other dive watches that also have on-paper case diameters of 40mm. Surrounding the flat sapphire crystal is a 120-click unidirectional rotating bezel with wide grooves along its outer edge for added grip, and this gets completed by a forged carbon insert with a luminous 60-minute elapsed time scale that has markings every five minutes with an orange triangle outline to denote the zero-marker. At the 3 o’clock location sitting between small pointed crown guards is a signed screw-down winding crown that works in conjunction with the caseback to provide users with 200 meters of water resistance. 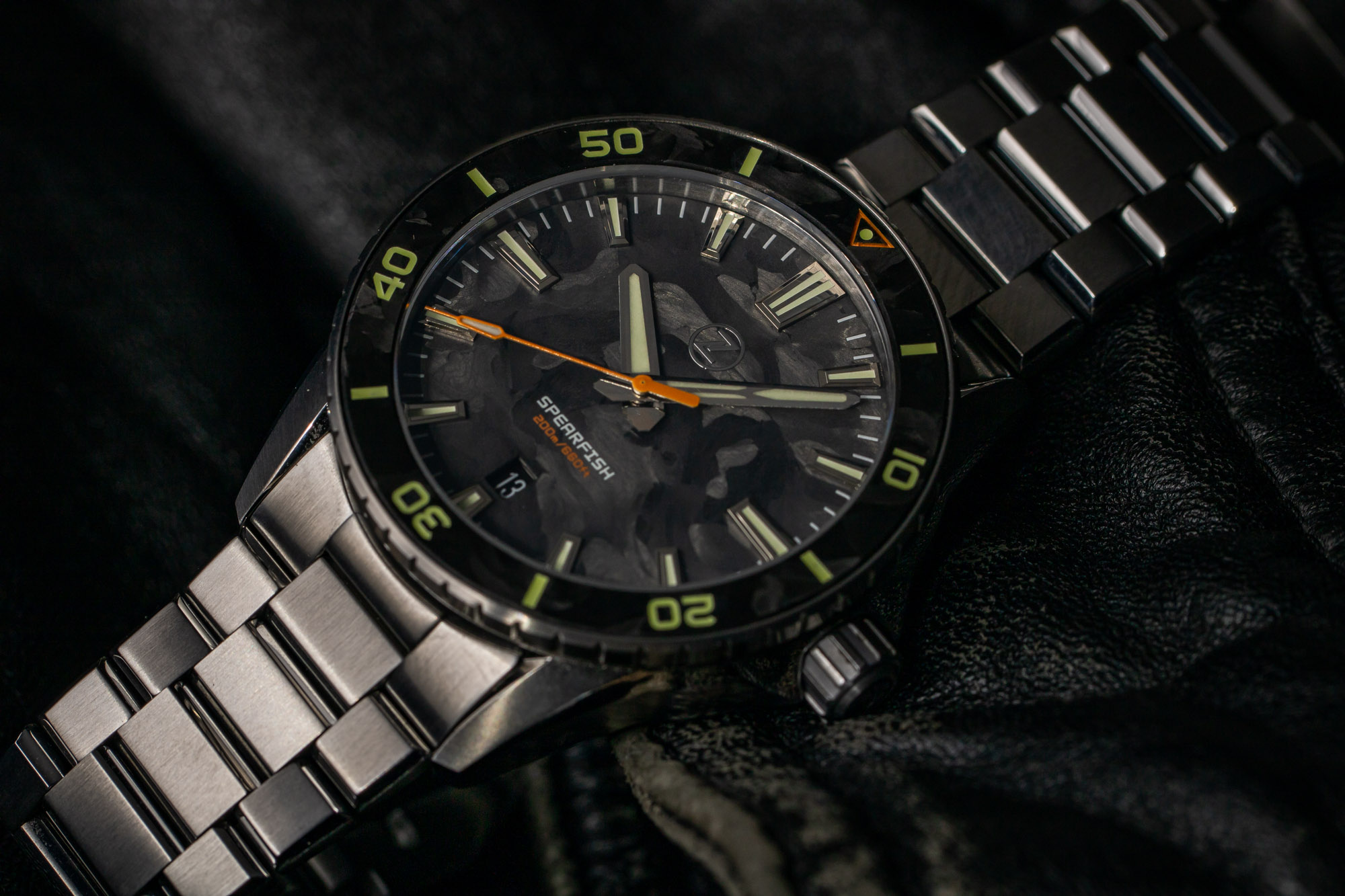 The dial of the watch features a flat forged carbon surface with a date window at 6 o’clock and applied polished hour markers, which feature a tapered baton shape and are filled with generous amounts of Super-LumiNova. The Zelos logo appears as a polished element below the 12 o’clock marker, while the lower half of the dial receives the “Spearfish” name in white, along with the watch’s depth rating printed in bright orange letters. Completing the dial is a white printed minute track along the outer periphery, while the time itself is displayed by a trio of luminous centrally-mounted hands. The hour and minute hands appear as wide tapered batons with polished surfaces to match the indexes, and the design of the minute hand includes a unique Y-shaped support structure in the middle to offer added stability for the lume. Meanwhile, the seconds hand features a thin shape with a luminous section near its tip, and it has been finished bright orange to match the other small highlights on both the dial and bezel insert. 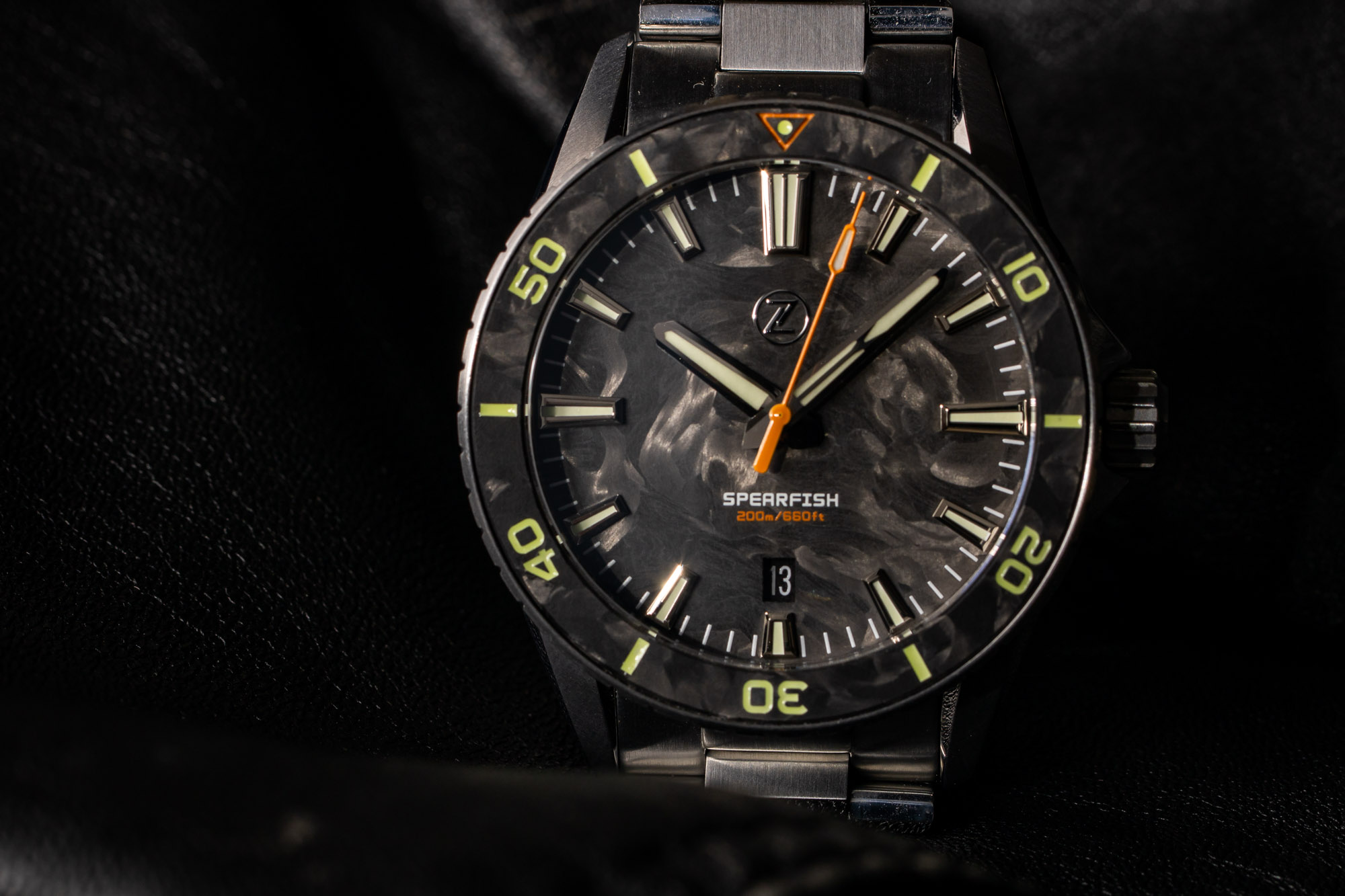 The overall effect of the forged carbon dial is somewhat similar to what you get from meteorite, where it shows the natural patterns of the material once it has been cut, and this means that each dial will appear slightly different. However, compared to the sharp crystalline lines you get with meteorite, the patterns found within forged carbon are more rounded and swirly, and the material itself is also noticeably less shiny for a more utilitarian overall aesthetic. That being said, there are certain light-catching elements in the forged carbon, so when viewed in very bright lighting, the dial surface has a little bit of sparkle to it, making it not quite as legible as something like a traditional matte black surface. The tradeoff is that you get a significantly more unique appearance, while also being able to enjoy the aesthetic of forged carbon without needing to have an entire watch made from the material, which some collectors can object to because full-carbon watches can often lack that heft and sense of quality that typically comes from things crafted from metal. 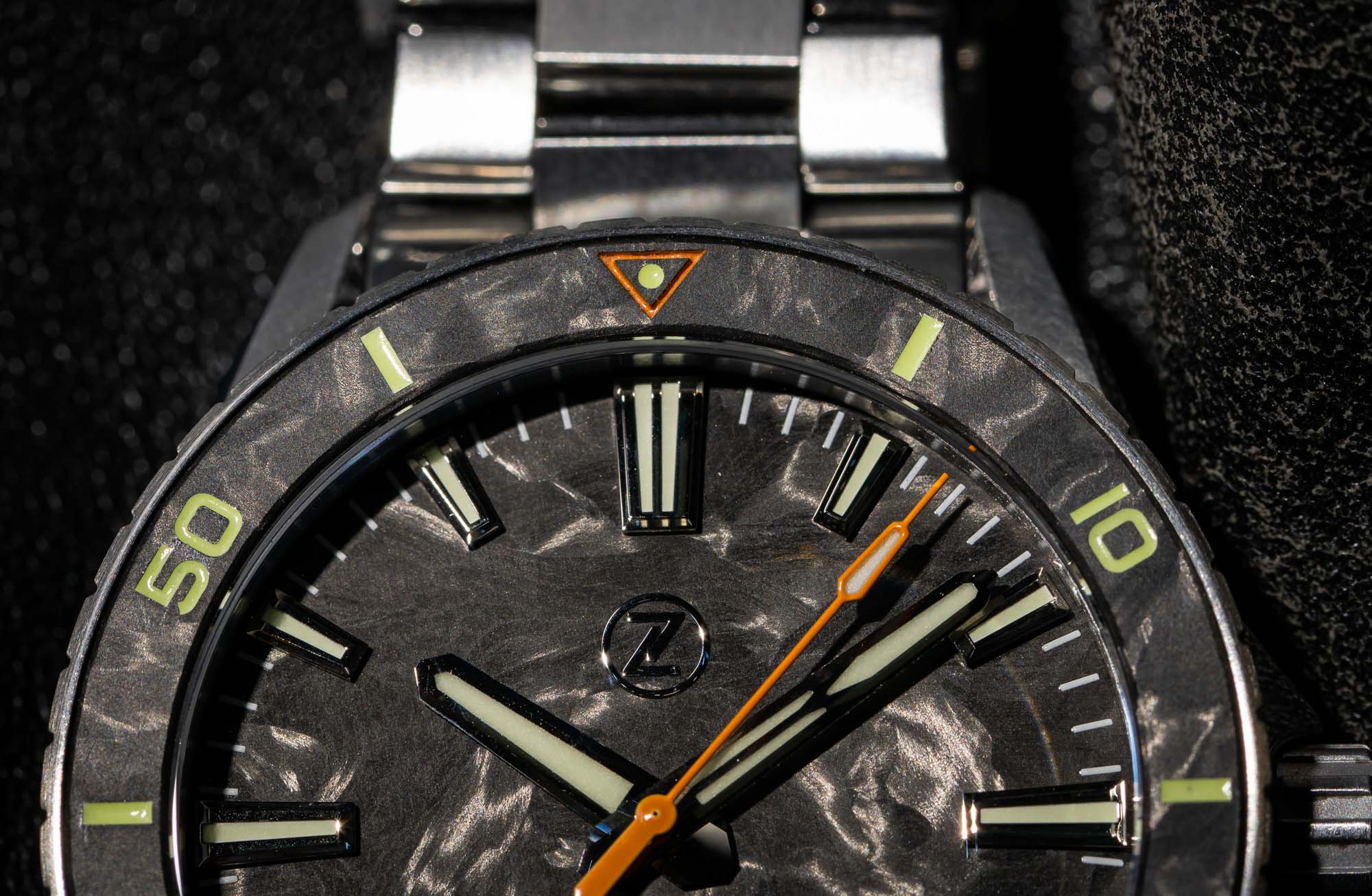 When it comes to most watches produced by small-scale independent brands operating well below the thousand-dollar price point, rarely is the movement a noteworthy point of discussion. The vast majority of the time, you are getting a reliable, proven, and entirely inauspicious workhorse mechanical caliber from a big-name movement manufacturer such as Seiko, Miyota, or maybe even one of the more affordable Swiss options such as Sellita, Soprod or one of the other similar equivalents — and in my opinion, there is absolutely nothing wrong with this approach. Not only do expectations need to be reasonable with mechanical watches produced in small batches that sell for hundreds (rather than thousands) of dollars, but it also guarantees easy and affordable maintenance down the line without any red tape surrounding the supply of service replacement parts. That being said, whenever you do see small-scale affordable brands step things up in the movement department, such as in the case of the Zelos Spearfish 40mm Diver, it is certainly something worth noting. 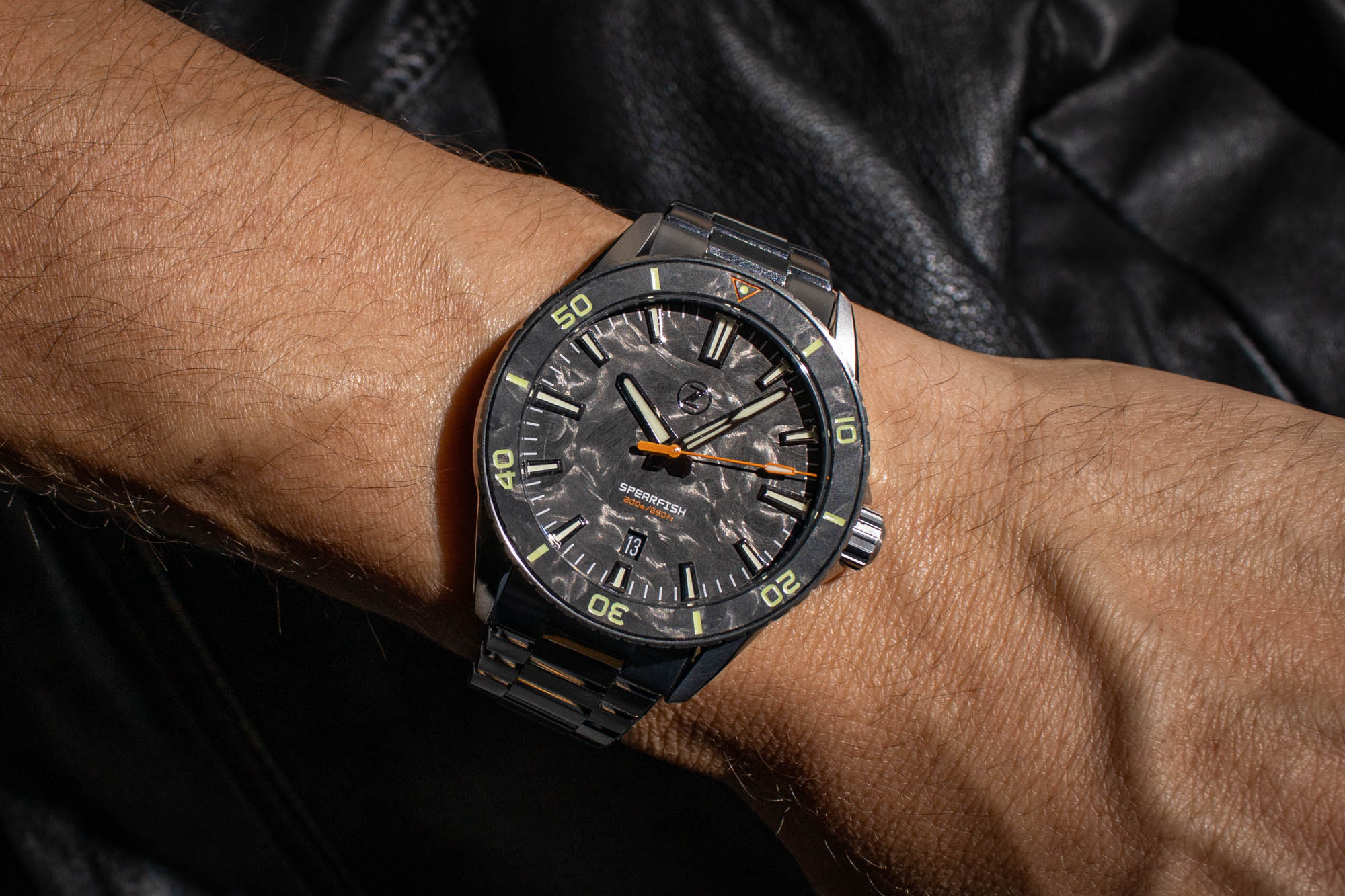 Powering the Zelos Spearfish 40mm Diver “Forged Carbon” is the La Joux-Perret G100 automatic movement, which is a notable step above what you would usually expect to find inside a watch at this price point. La Joux-Perret is a famous Swiss movement manufacturer that now operates alongside Miyota within the greater Citizen umbrella group, and you typically see La Joux-Perret movements inside watches that are priced at several thousand dollars. Launched in 2021, the Caliber G100 was developed by La Joux-Perret to be a new entry-level movement with compatible dimensions to the highly popular ETA 2824. The underlying architecture of the Cal. G100 appears to be somewhat similar to the popular Miyota 9xxx series, but even a quick glance will reveal a number of notable differences, along with significantly better finishing. Running at a frequency of 28,800vph (4 Hz) with a power reserve of approximately 68 hours, the La Joux-Perret G100 offers superior performance specs to most competitor movements at this price point, and you even get gunmetal-finished bridges with Geneva stripes, along with a solid tungsten oscillating weight adorned with matching finishing. 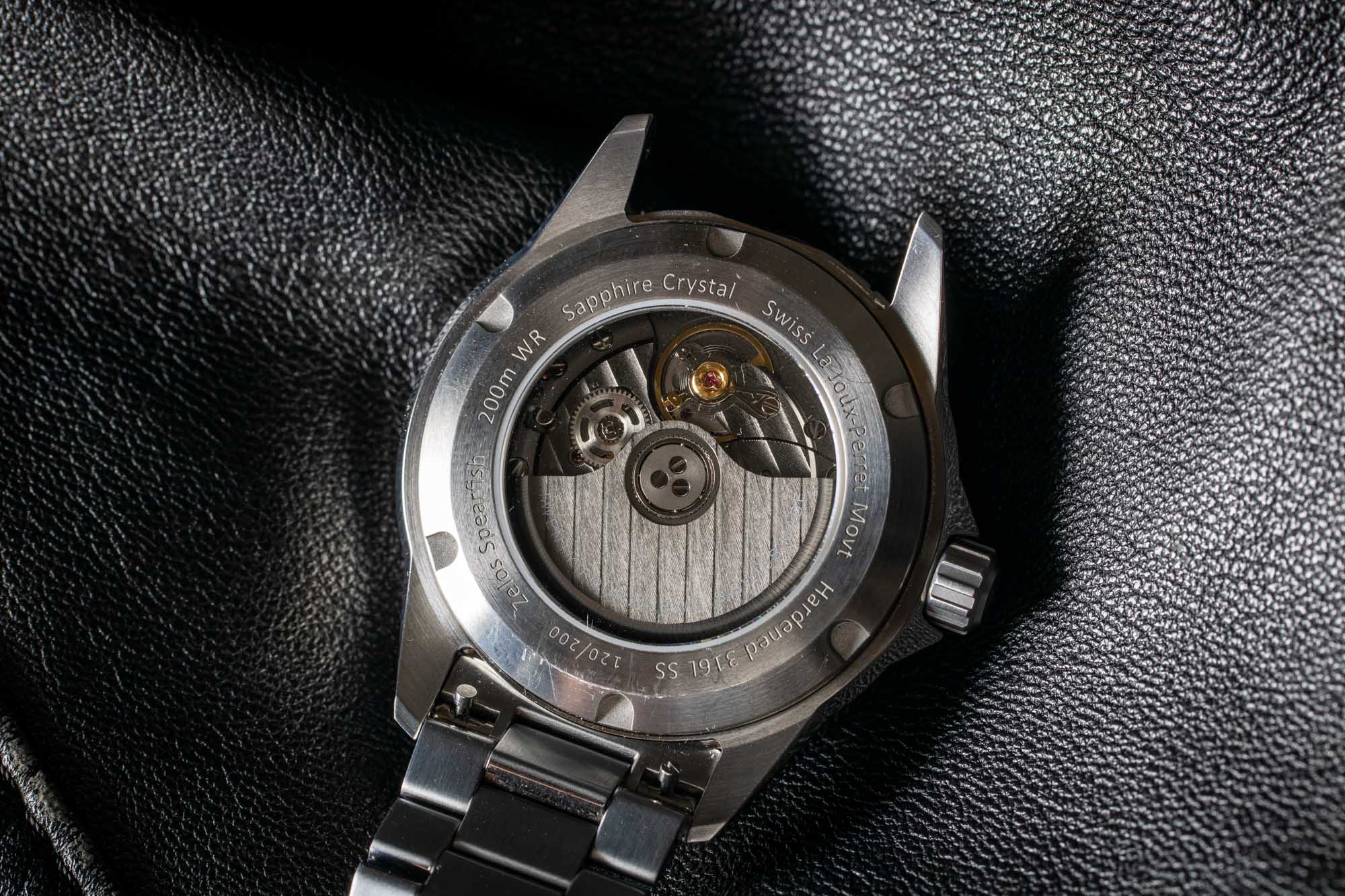 Creating a good bracelet can often be more difficult than producing a decent watch, and Zelos is a brand that frequently receives praise from the enthusiast community for the bracelets fitted to its watches. Featuring a flat three-link design with completely solid components, the removable links are attached by screws (rather than friction-fit pins), and while the bracelet itself features a largely brushed design, the outer edges of the links receive a thin high-polished bevel for an added touch of refinement. The solid end-links attach to the case with integrated quick-release pins, and since the bracelet hinges at this first connection point, the overall lug-to-lug profile of the watch stays true to its on-paper specs making it better suited for a wider variety of wrist sizes. Completing the bracelet is a machined clasp with a double push-button release, which features a very good extension system that offers five positions of micro-adjustment. Expanding the bracelet is done by pressing the lever inside and pulling the bracelet outwards, and contracting it can be done by simply squeezing the two ends together. Given the rather compact profile of the watch itself, the clasp is comparatively somewhat large; however, it’s undeniable that it offers all of the functionality people seek these days, and it is even signed with the Zelos logo. 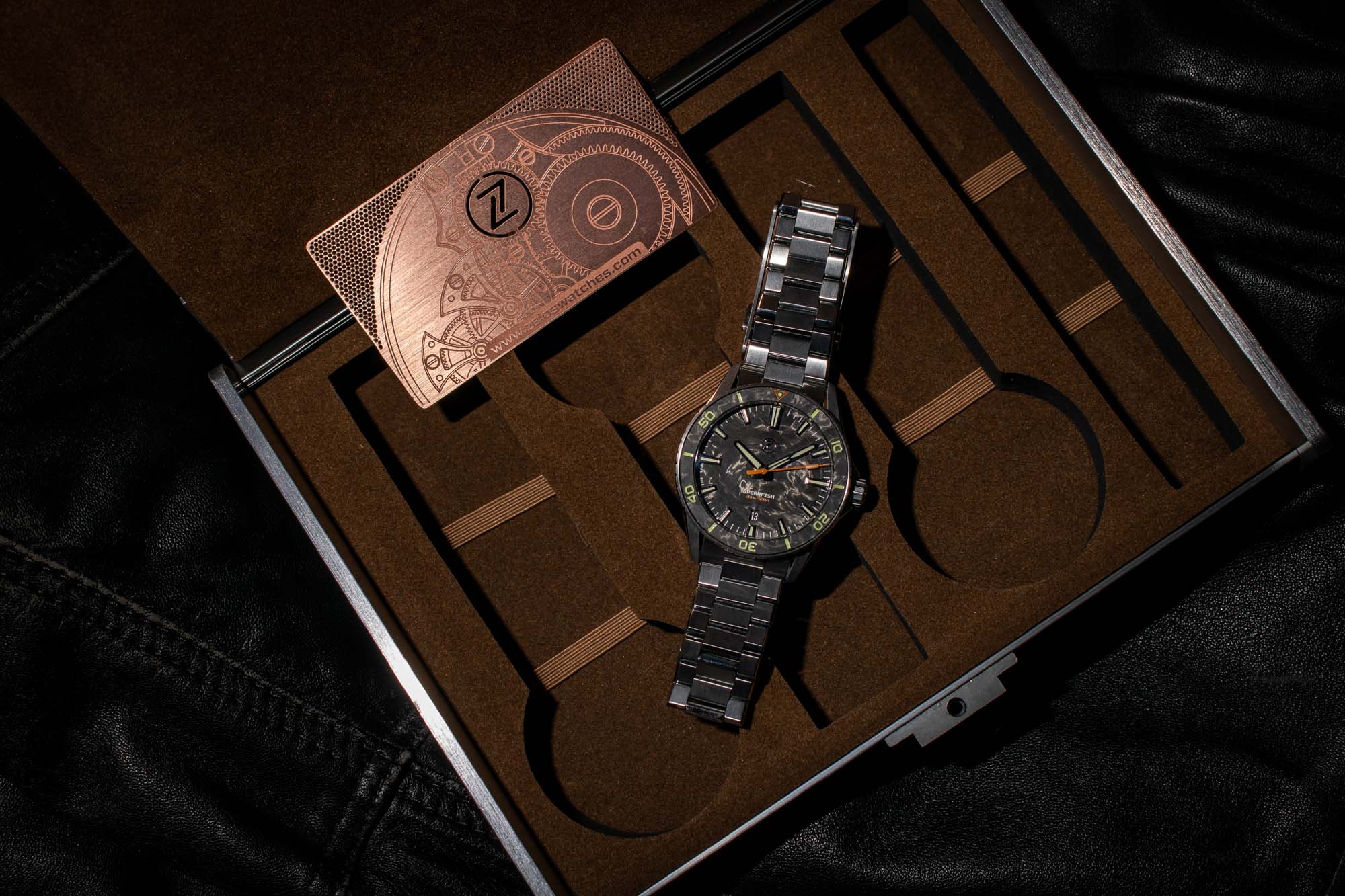 With good finishing, hardened steel components, a very well-done bracelet, and a Swiss movement from La Joux-Perret, it would be easy to expect that the Zelos Spearfish would be priced somewhere north of a thousand dollars, especially considering that this example also features a forged carbon dial and a matching forged carbon bezel insert. However, the Zelos Spearfish 40mm Diver ‘Forged Carbon’ is accompanied by an official retail price of $799 USD, and this even represents a small additional premium compared to the standard models due to the fact that this version features forged carbon parts. The hardened stainless steel seems to do its job at preventing day-to-day scratches, and the only visible blemishes that I can even see on the watch are the small scratches on its caseback that have been made by coming into contact with its bracelet, which also is treated with the same surface hardening. Even the packaging for the watch is a step above what you expect, and rather than being accompanied by a standard cardboard box, the Zelos Spearfish 40mm Diver ‘Forged Carbon’ comes in a thick aluminum travel case with spaces for three watches plus an extra strap. It can be easy to dismiss the hype that surrounds certain brands as just the general buzz from a highly vocal group of fans, but after spending some time with the Zelos Spearfish, I can honestly say that the hype is well deserved. As the average Seiko Prospex dive watch continuously makes its way towards the thousand-dollar price point, alternatives from small-scale independent brands are becoming increasingly attractive options, and for anyone interested in value-packed sports watches that offer distinct modern styling, Zelos is a brand that should definitely be on your radar. For more information, please visit the brand’s website.