Since the commencement of the aerial age at Kitty Hawk, there has been a multitude of different interpretations of the “pilot’s watch.” Few have maintained such a lasting impact as the Hanhart 417. Originally created for the Bundeswehr, or German Defense Forces, the 417 chronograph is a prototypical example of form following function. When it came to design aesthetics aimed at legibility and operational effectiveness, Hanhart blazed a contrail through the sky. By placing itself in the goggled perspective of an aeronaut, the brand developed an enduring form that is as welcome in 2020 as it was at its inception. The introduction of the new 417ES in the Pioneer collection stands resolute as a contemporary yet authentic recreation that manages to harness the winning charm of a vintage timepiece. 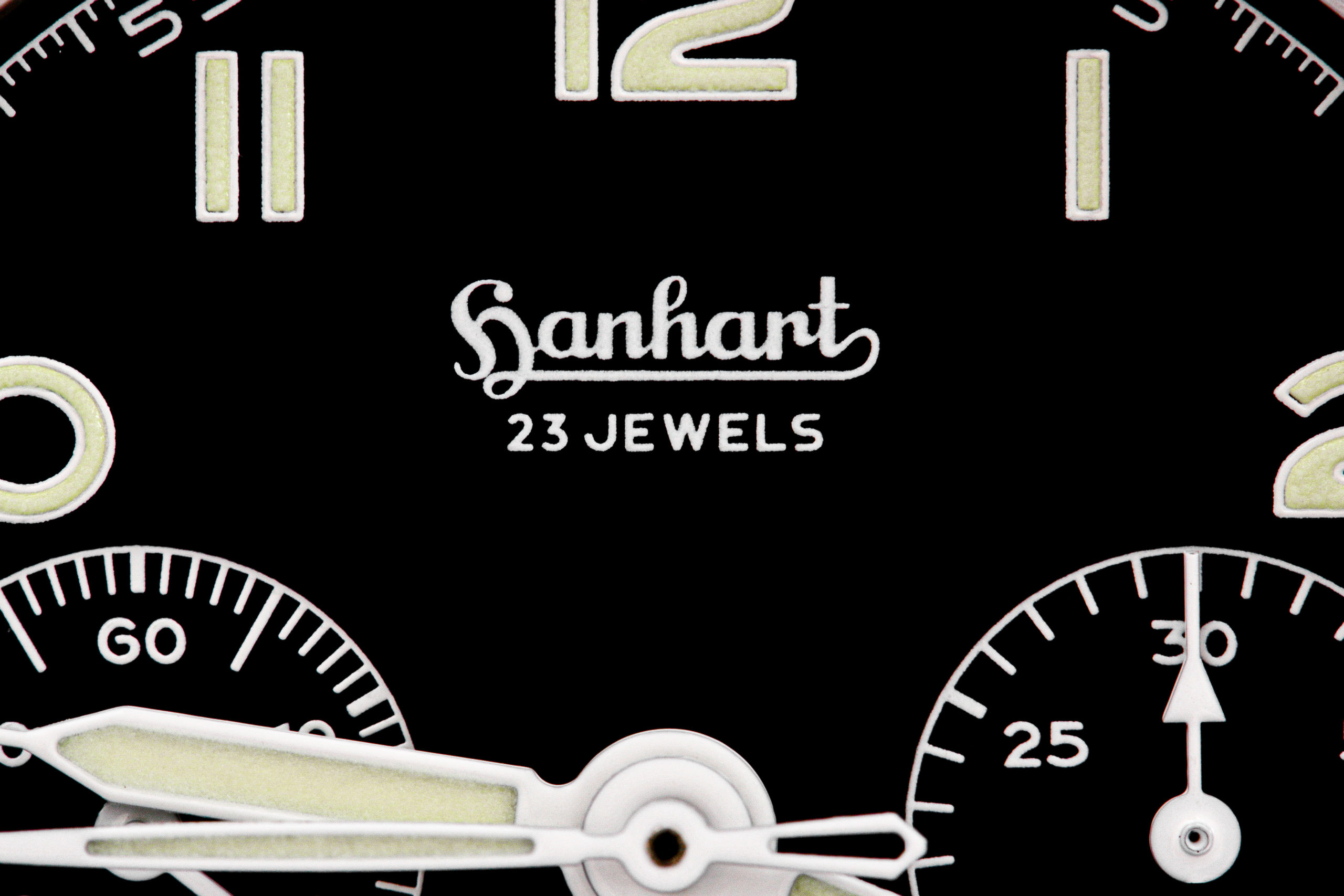 Like many watch companies, Hanhart can trace its roots to Switzerland, where the company was formed in 1882. After only a few short years, production moved to the German town of Schwennigen prior to settling at the current residence in the Black Forest town of Gutenbach. Hanhart was quick to establish a sterling reputation manufacturing mechanical stopwatches in the early 1920s before branching out to aviation chronographs closer to the mid-20th century. To this day, Hanhart continues to build upon this legacy. In fact, despite the rise of digital technology, it forges ahead in producing sophisticated mechanical stopwatches. The finesse and precision required to manufacture these timepieces have been honed for over a century. Armed with a surplus of inspiration in the form of past catalogs, Hanhart maintains the technical prowess to do these models justice. 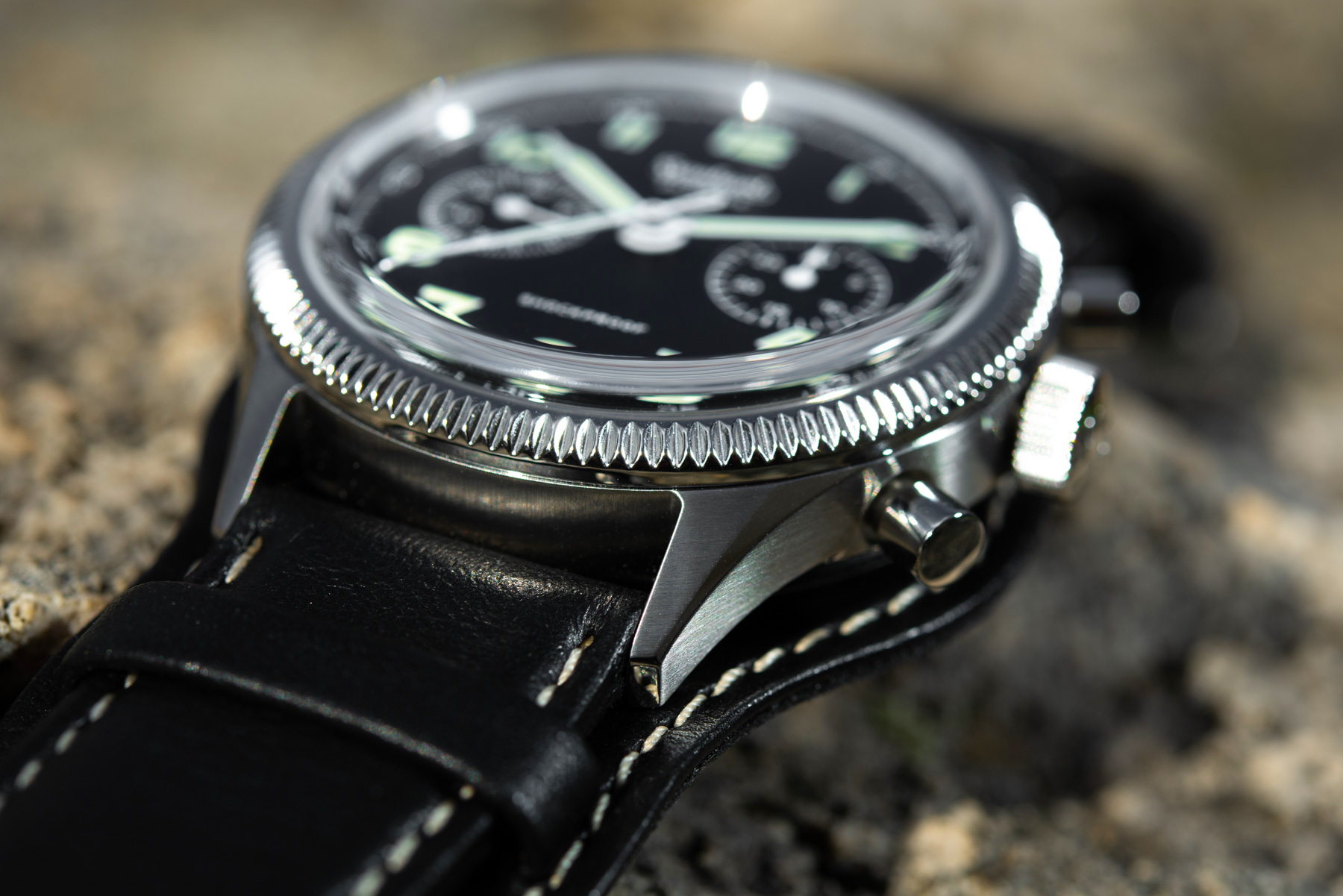 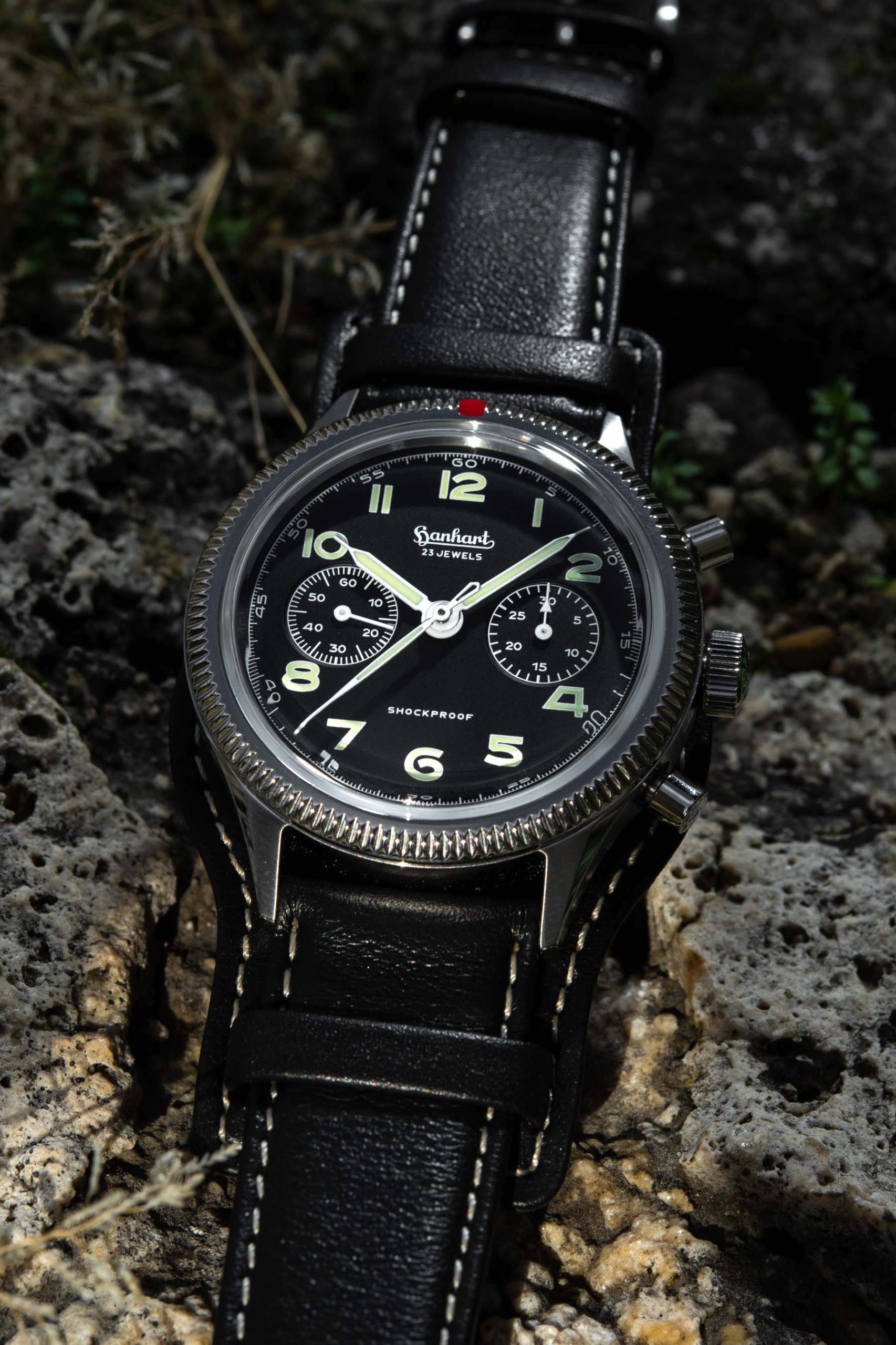 The Hanhart Pioneer 417ES chronograph is based on a 1950s-era relative simply called the 417/417ES. Though the model’s lineage can be traced to the Bundeswehr in post-WWII West Germany, it represents a trend that transcended its militaristic origins. The 417 of yore came in two variations, the 417 and 417ES. While the standard 417 featured a matte chrome-plated brass case, the case of the other was entirely comprised of stainless steel. The newly announced 417ES is a spiritual successor in every way. 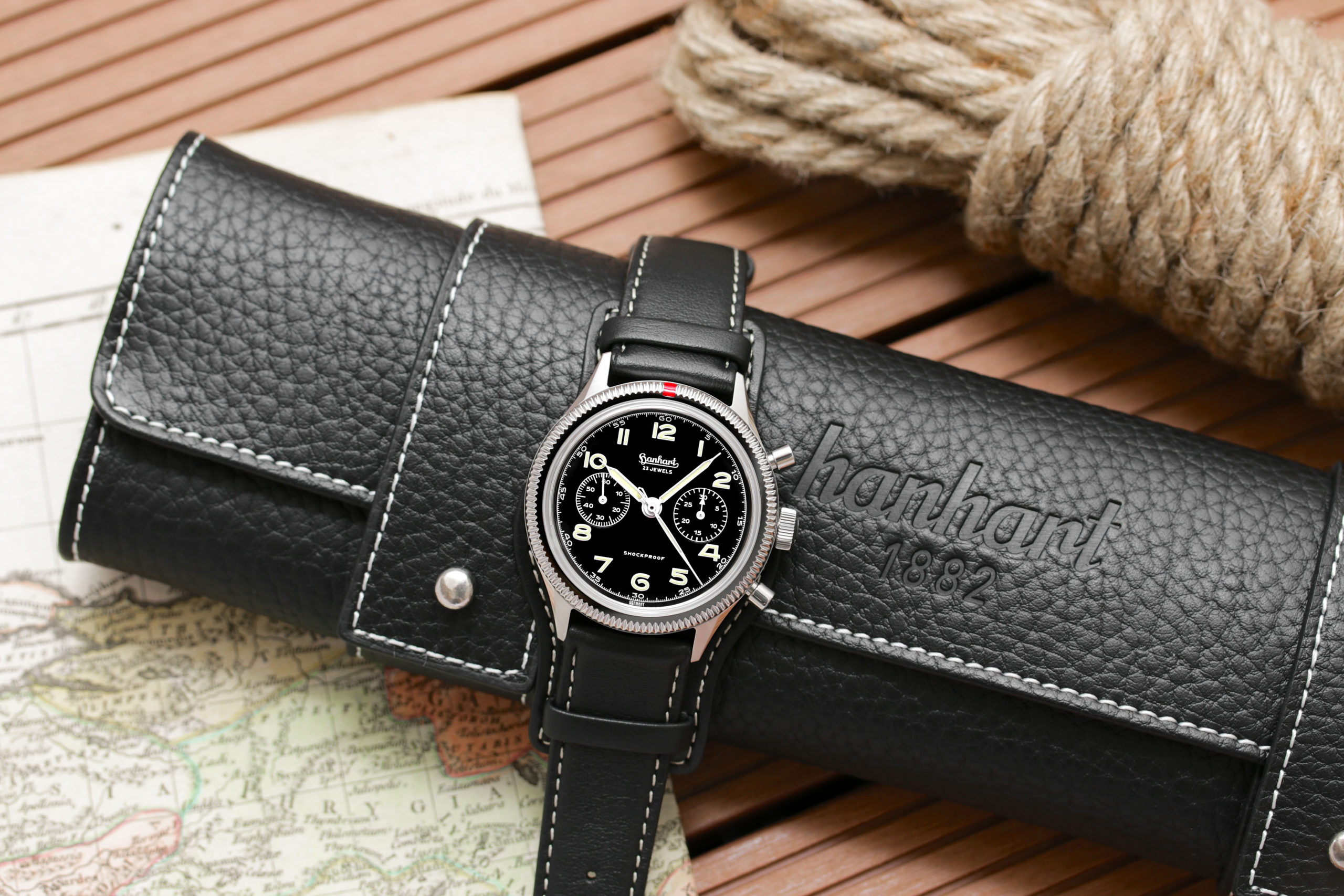 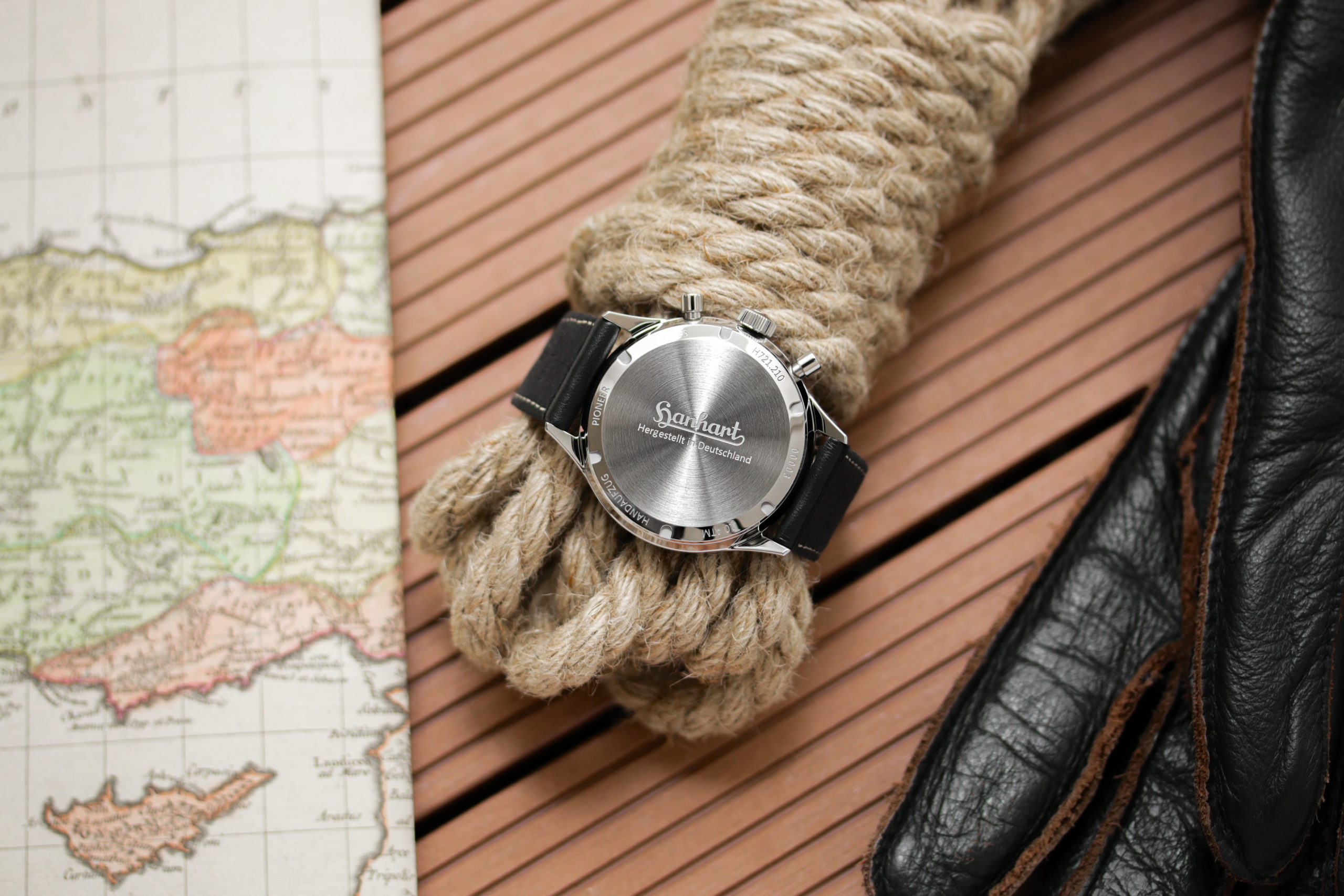 It is evident in both design and material choice that archival accuracy was paramount to Hanhart when building this timepiece. With a wrist-friendly diameter of 42mm and a lug-to-lug of 49.5, the 417ES is powered by a manual-winding Sellita SW 510 M movement capable of a 58-hour power reserve. Where there seems to be a current trend of modern companies reissuing vintage hand-winding chronographs with automatic movements, Hanhart made the deliberate decision to prioritize authenticity. While an automatic movement would negate the need for manual winding every two days, it tends to add thickness to a watch that can throw off the profile in an unsettling manner. Hanhart’s forward-thinking choice to use the aforementioned movement resulted in the 417ES clocking in at a svelte thickness of only 13.3mm (11.55 without the crystal). 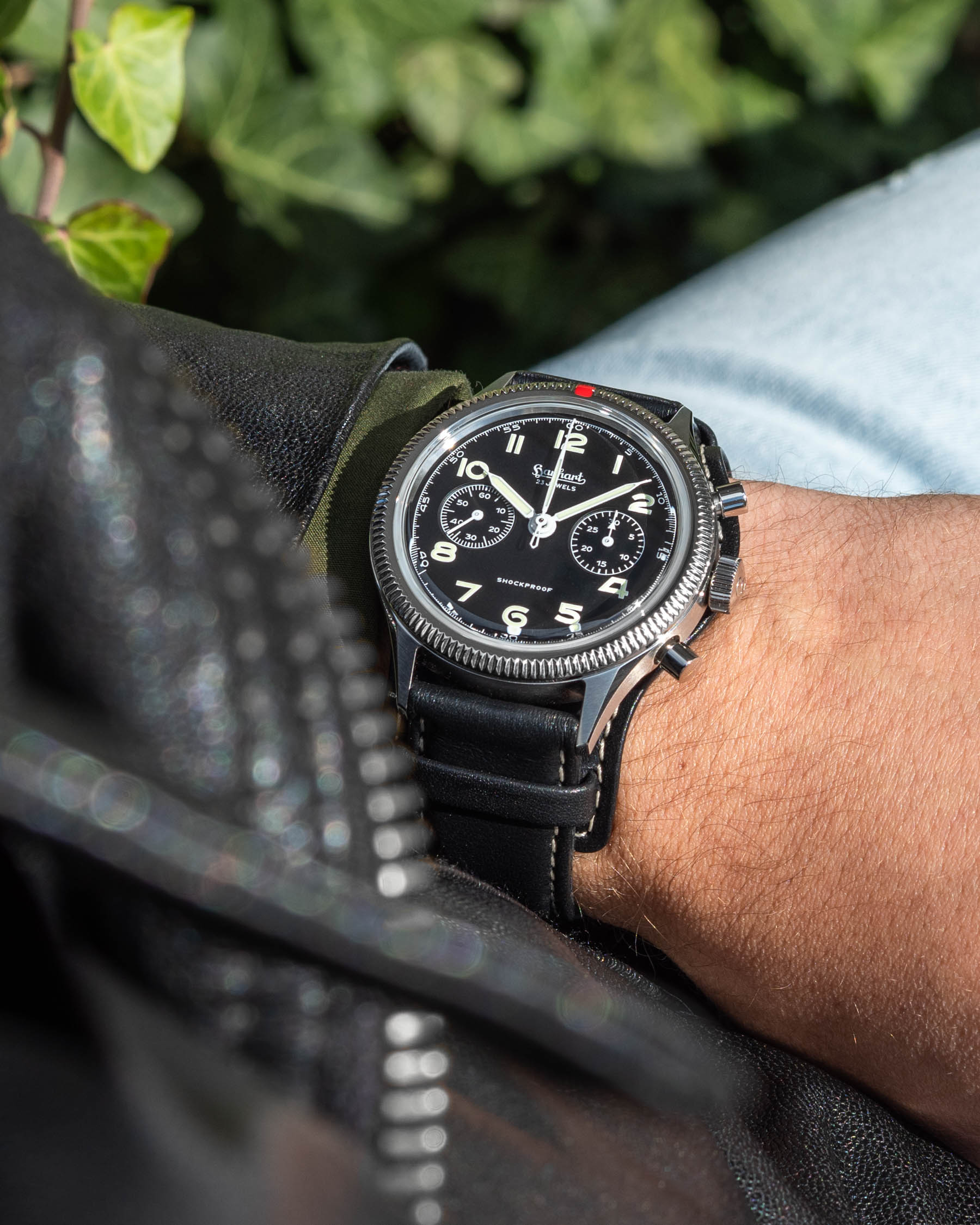 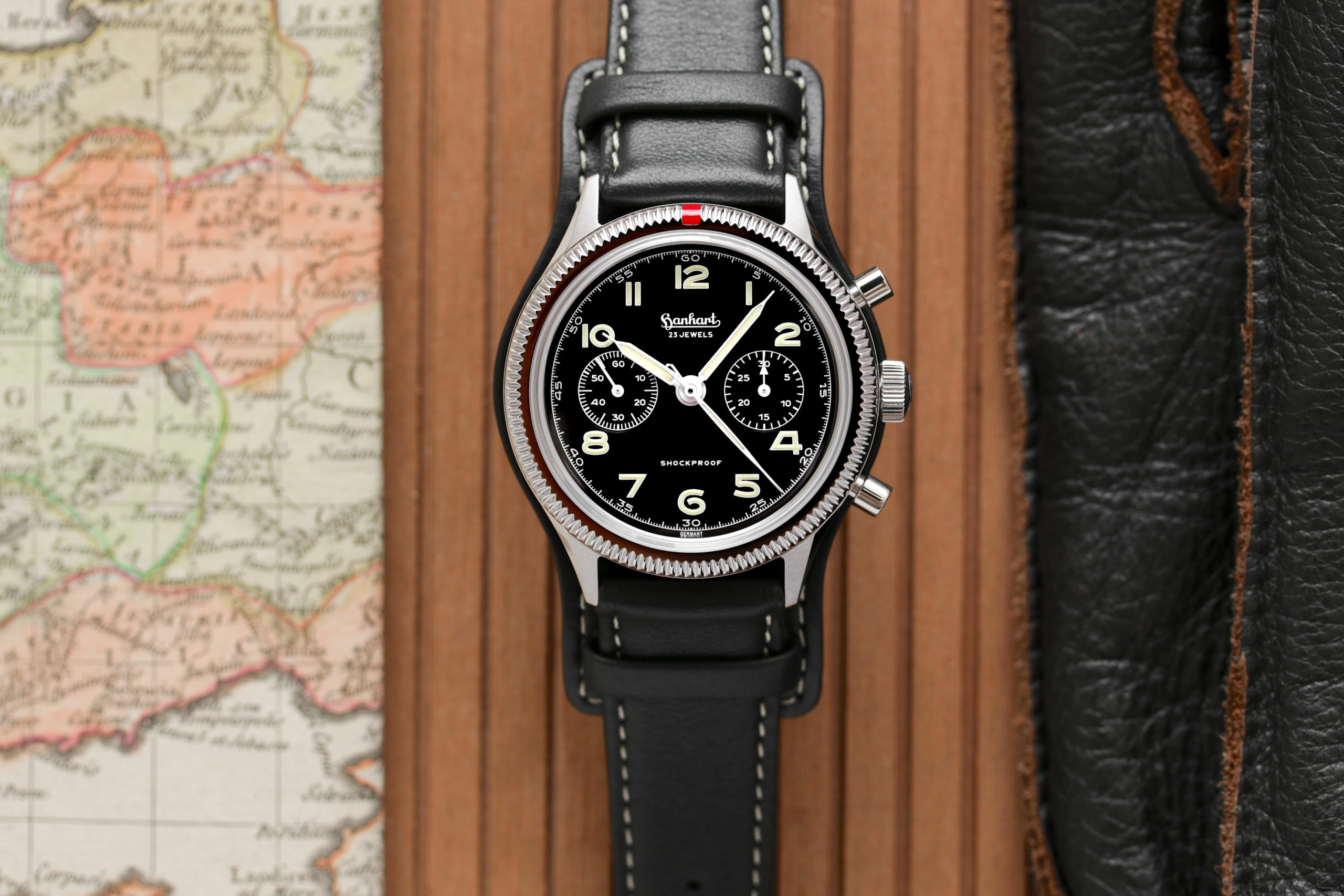 The historical veracity continues throughout the entirety of the watch. This 417ES is a bi-compax chronograph equipped with small seconds at 9 o’clock, a 30-minute counter at 3 o’clock, and a central stop seconds hand. The Arabic numerals, along with the syringe hands, are generously filled with Super-LumiNova C3 for those who prefer to fly by night. Encircling the dial of the 417ES is a fluted rotating bezel complete with the signature red square marking at 12 o’clock. The utilization of an impressive convex, AR-coated sapphire crystal provides the scratch-resistance of modern materials while emulating the warmth of old-school acrylic. It is also shockproof and water-resistant up to 100m, making it a solid contender for everyday wear. 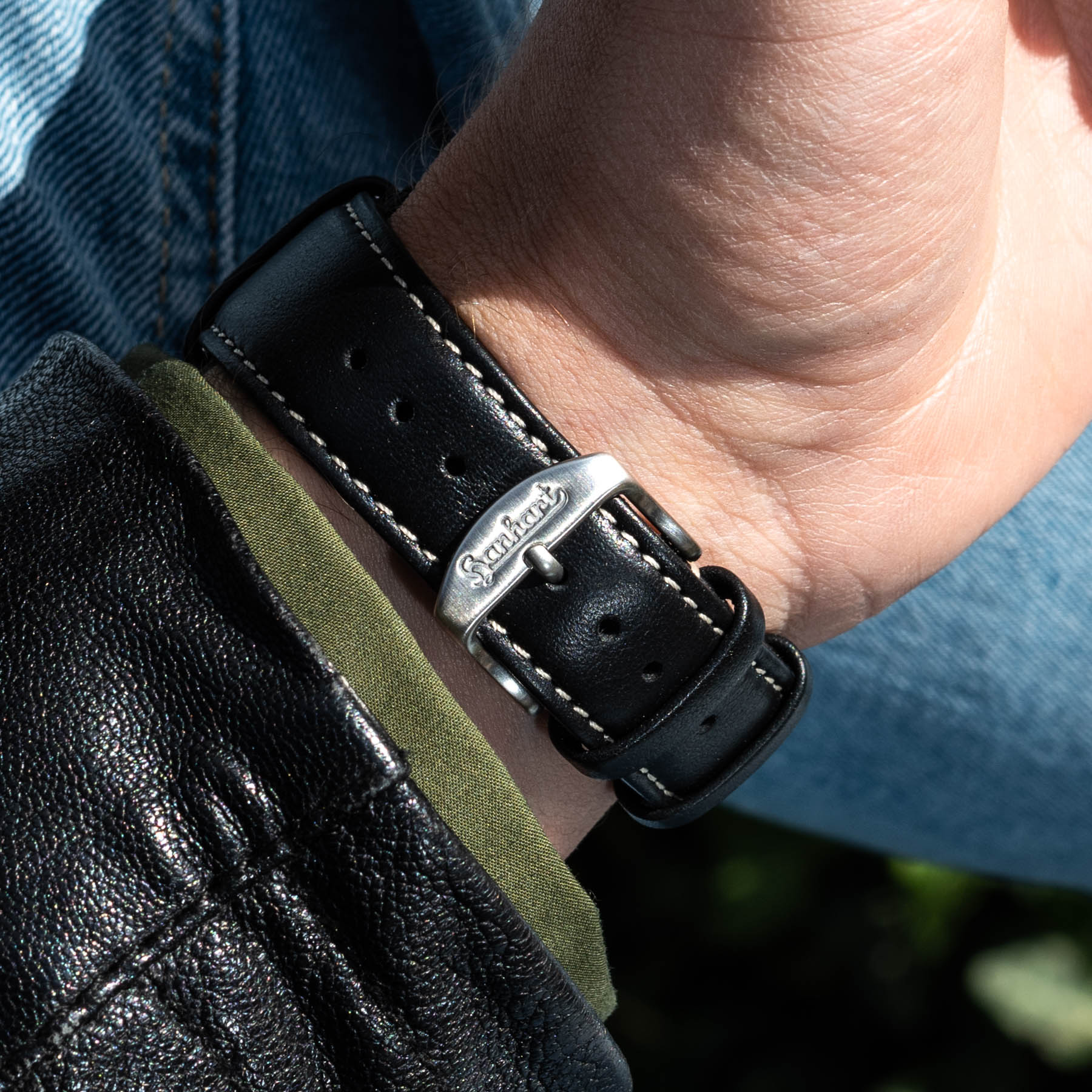 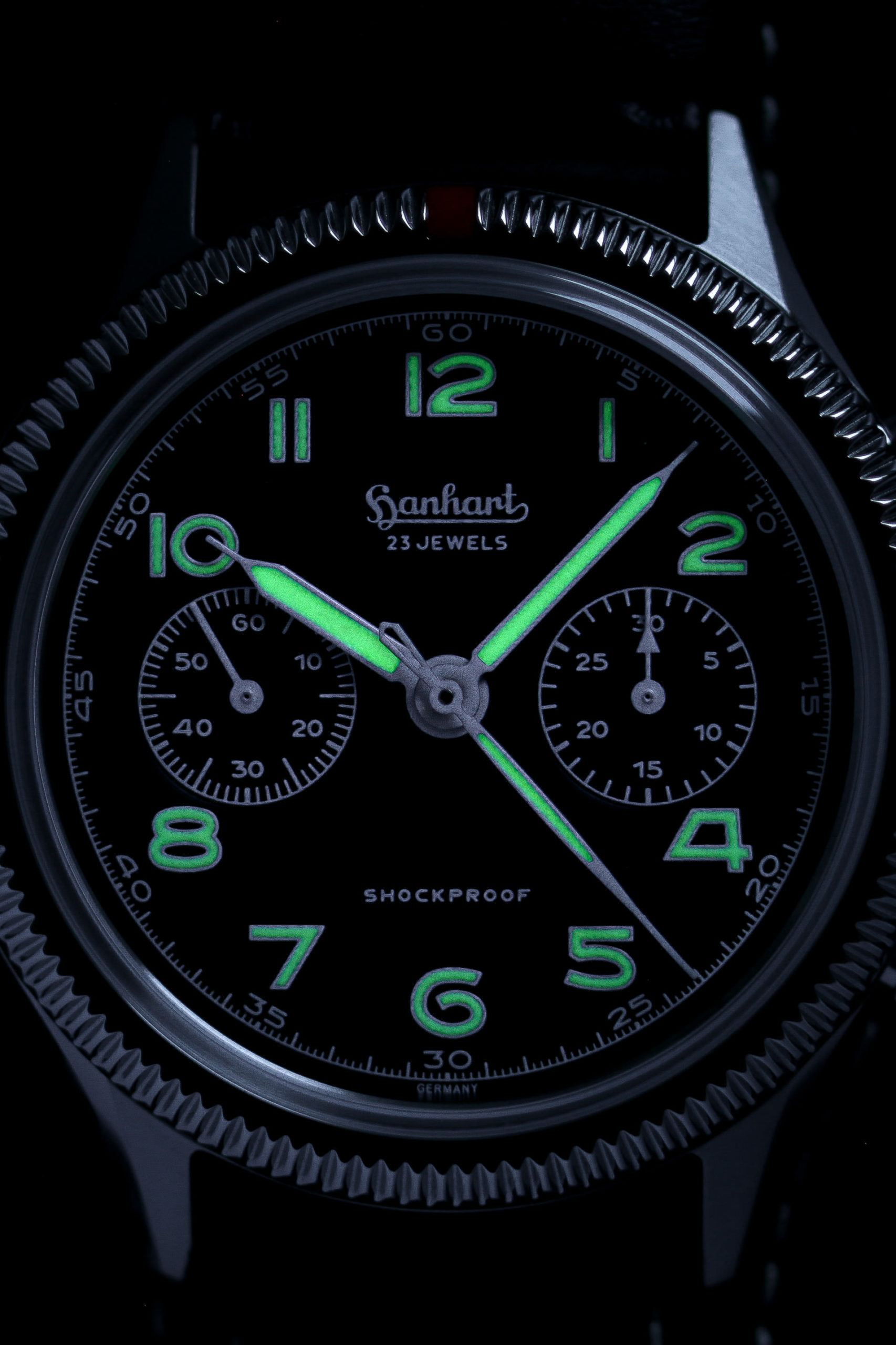 Generally speaking, the strap chosen to accompany a watch can come across as an afterthought. In the case of the 417ES, this is not the case. Now known as a “bund strap,” the polarizing aesthetic is characterized by a large leather underlay that mimics the shape of the watch. The initial creation of this strap was for German Airforce pilots as a means of reducing contact from the watch case to the skin. Extreme temperatures were not uncommon within the cockpits of vintage aircraft, and the thick leather cuff formed an effective barrier. In the decades to follow, and culminating in the 1970s, bund straps became something of a fad in their own right. It is a bold look entirely fitting for the Hanhart. That said, if it is not your cup of tea, the leather bund can be separated from the leather strap, allowing the watch to be worn in different configurations. 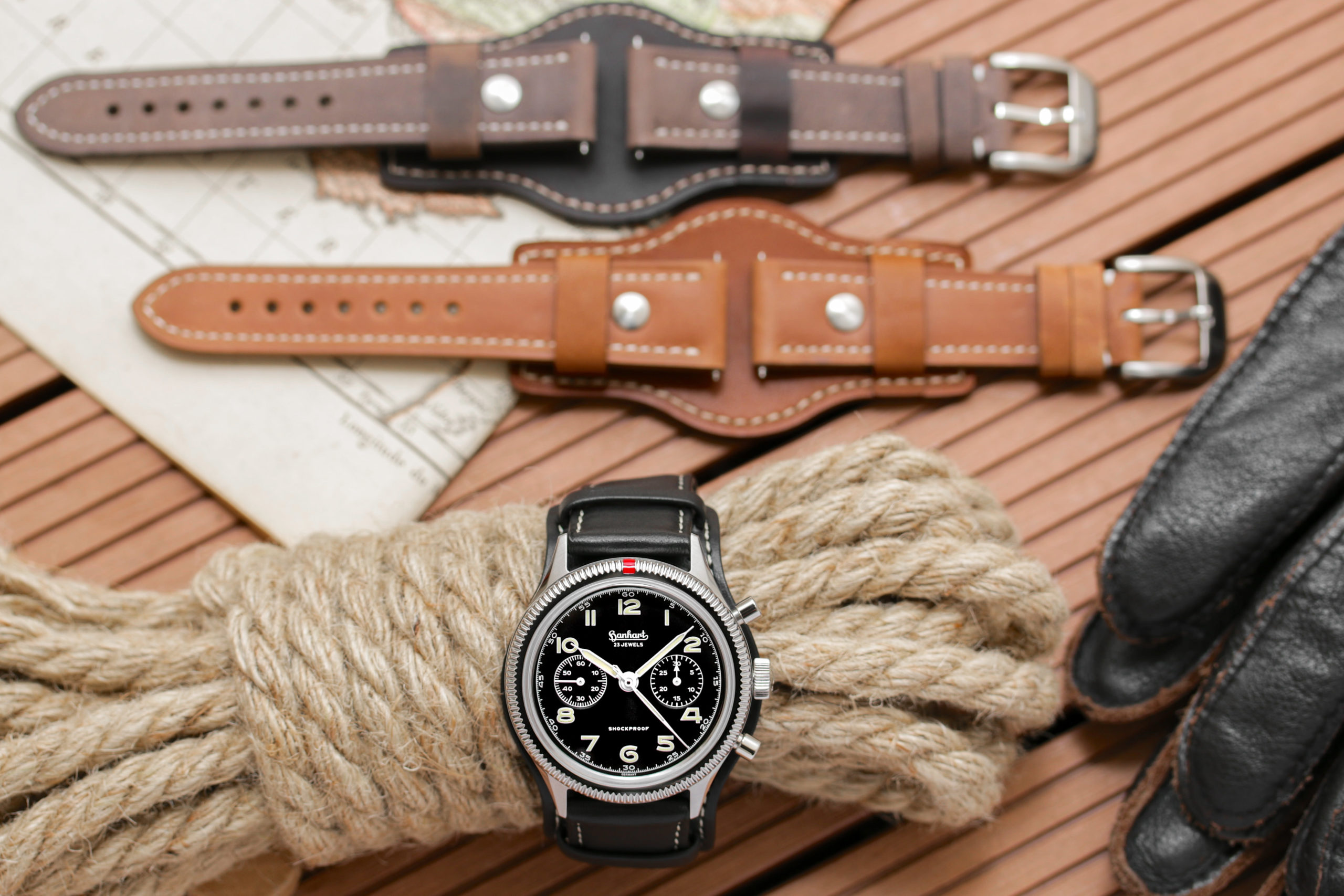 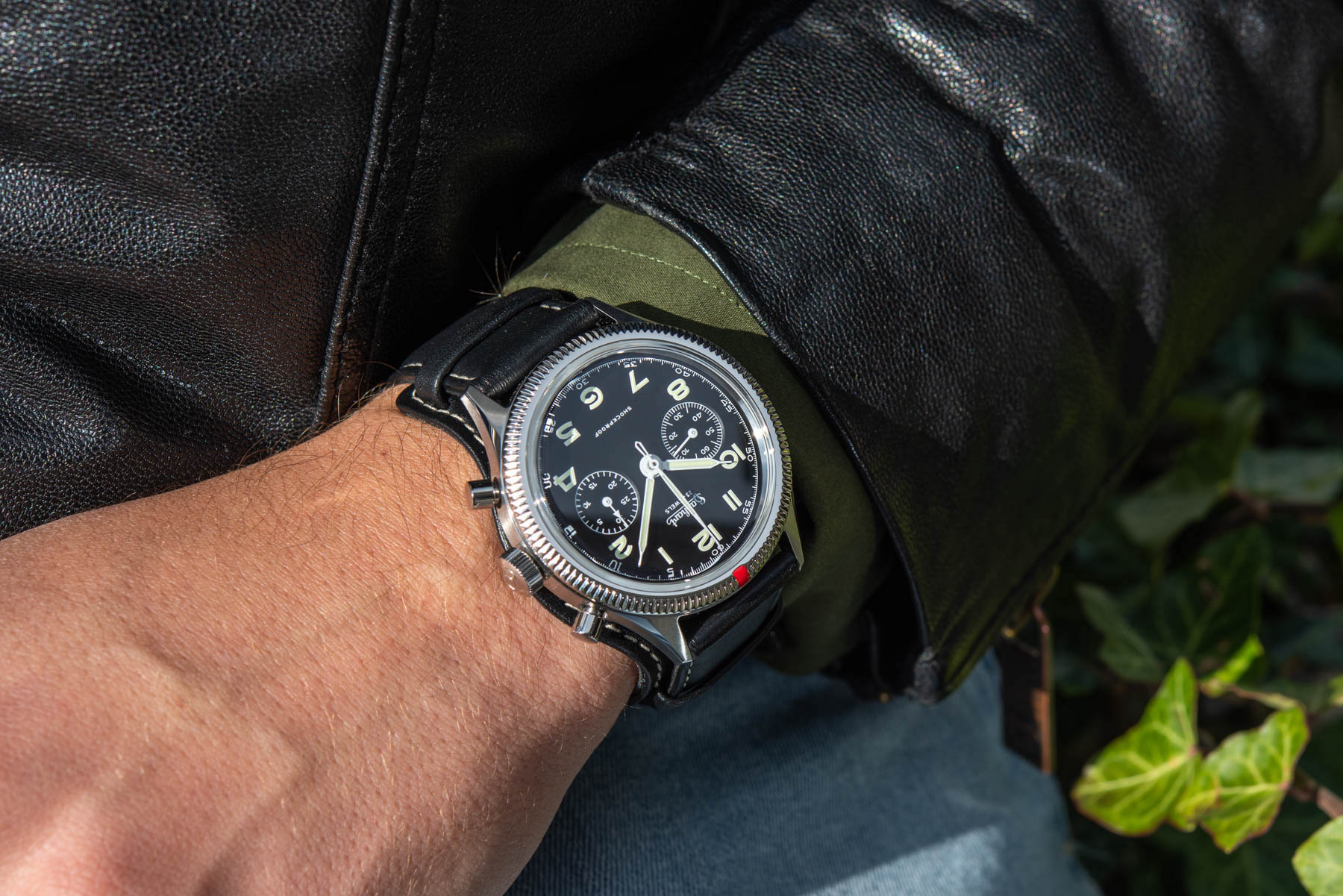 In some instances, the reintroduction of a model as beloved as the Hanhart 417 feels a bit like hearing a favorite musician perform a single that topped the charts forty years prior. Objectively, it is the same artist, the same song, but time has altered the sound in a manner that is familiar yet somehow new. In the case of this chronograph, Hanhart has managed to masterfully capture that nostalgic feeling and create an on-wrist record of the analog age. Rather than heavy-handedly modernizing beyond the point of recognition, Hanhart gave priority to the attributes that made the cardinal chronograph exceptional. Price for the Hanhart 417ES chronograph is $1,970 USD (1790 EUR incl. 19% German VAT). Learn more at the Hanhart website here.