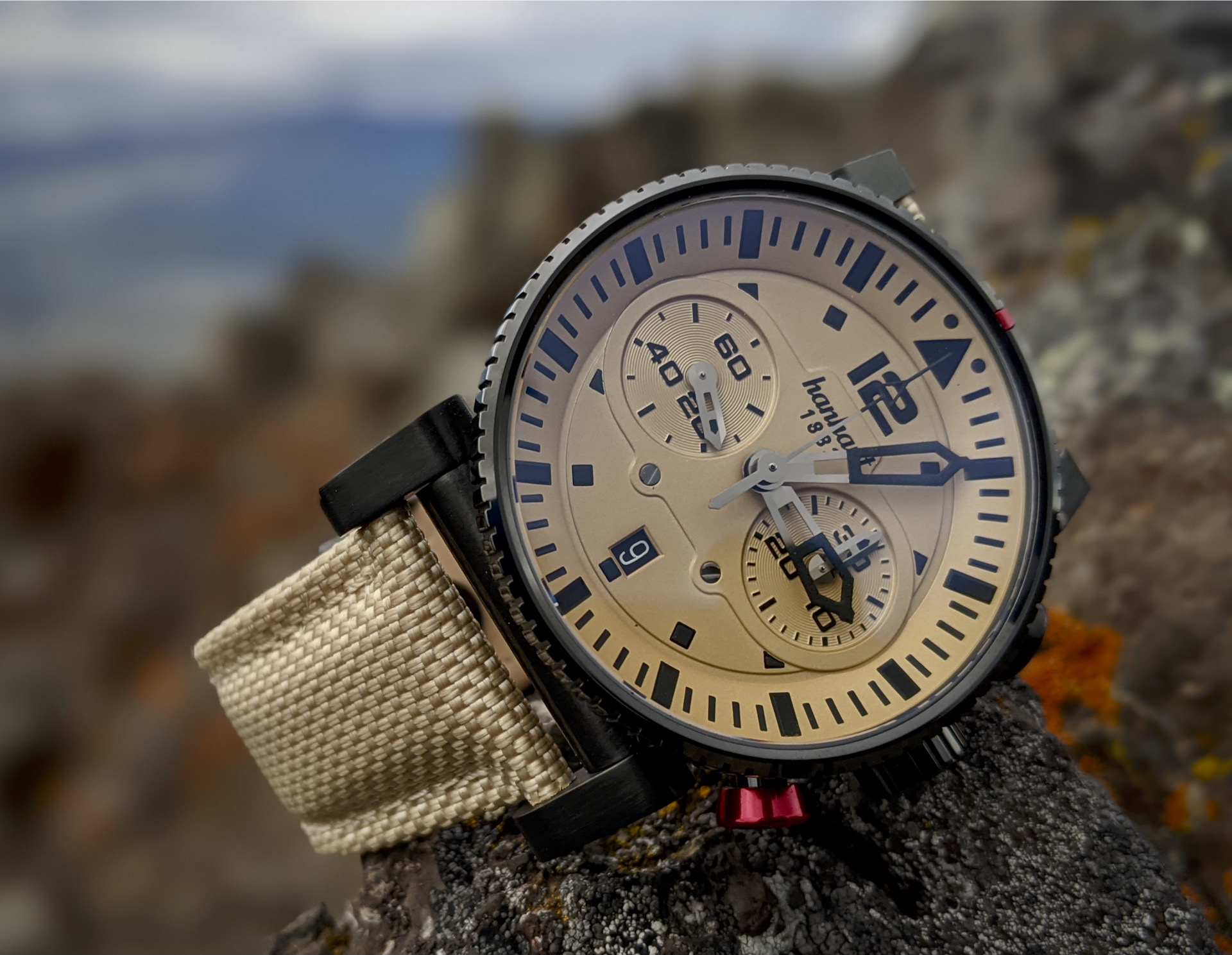 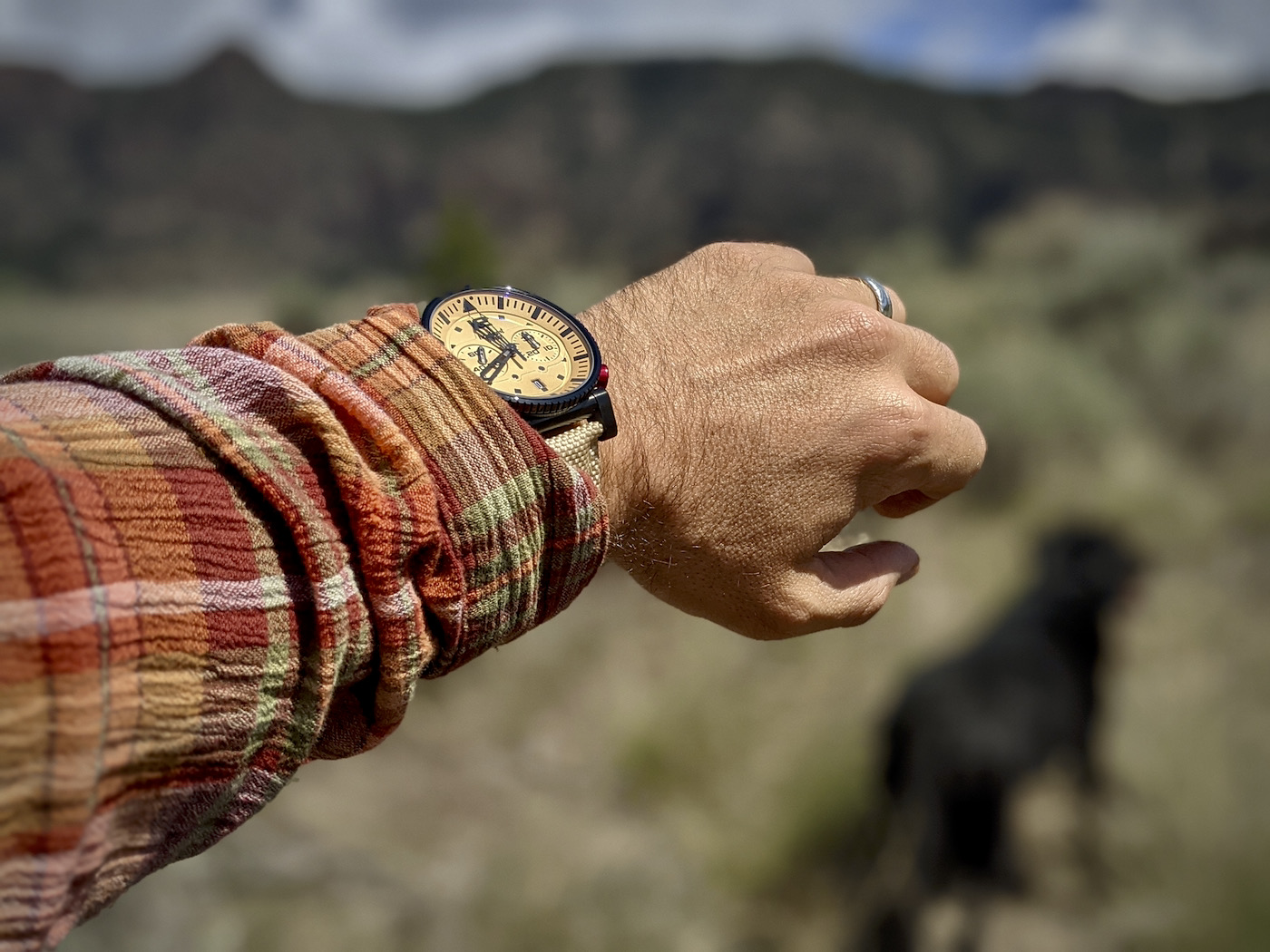 When it comes to purpose-built tool watches, German brands are renowned for creating outstanding pieces that are rugged, legible, and typically offer excellent value. As a result of owning and reviewing plenty of German watches, I’ve become an unabashed fan. And while I have spent ample time with watches from many of the other German stalwarts, like Sinn, Damasko, Mühle Glashütte, this was my first time going hands-on with a watch from Hanhart. While many may know the brand from its classically styled pilot’s watches, Hanhart’s PRIMUS line of overtly modern versions is actually the brand’s most popular, bestselling line. For the past couple of months, I’ve had a chance to test-drive the brand’s latest release, the Hanhart Desert Pilot Dark. Limited to only 100 pieces, this is a blacked-out version of the Desert Pilot that also comes with a custom folding knife made in Austria. 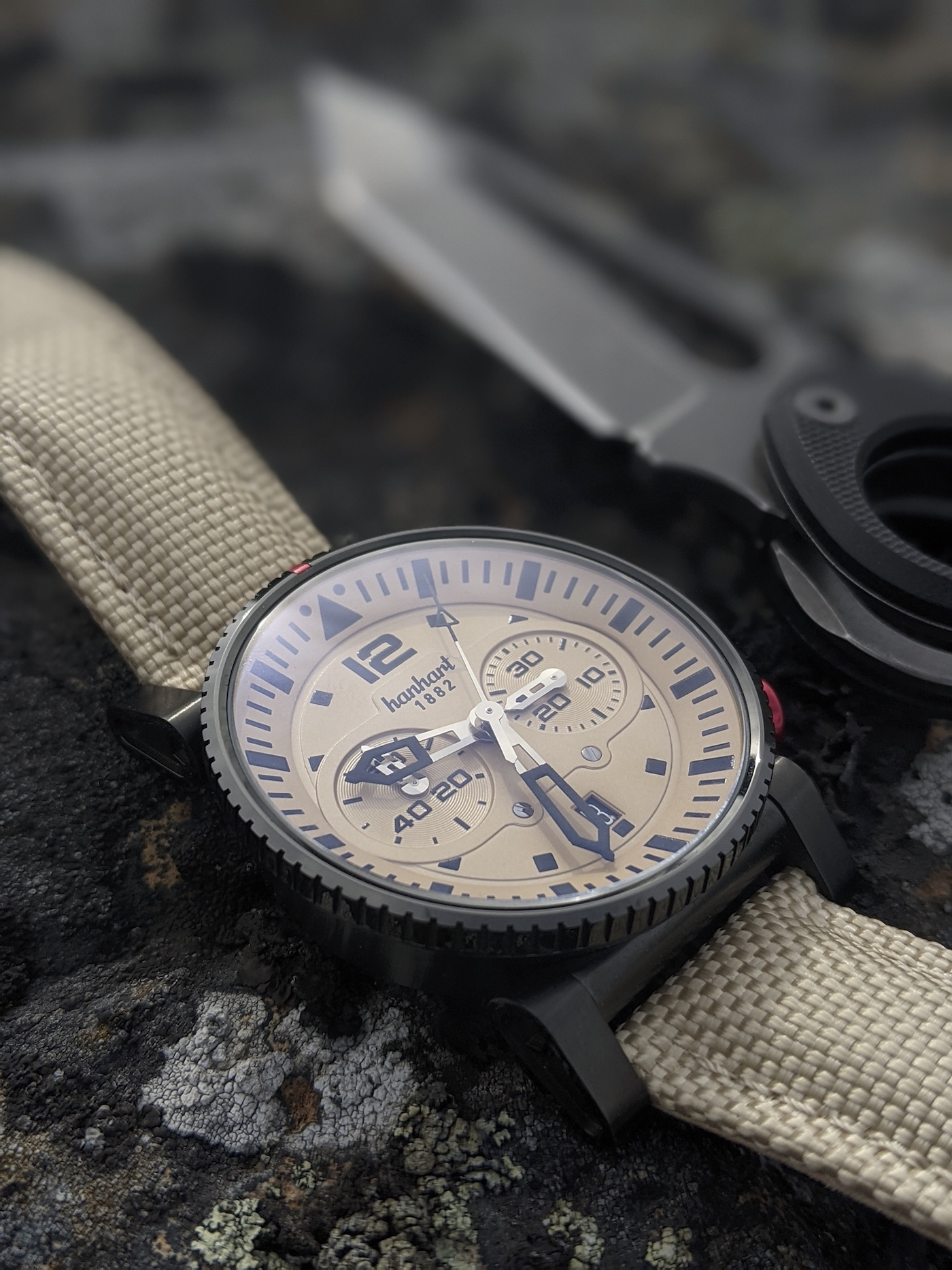 For those unfamiliar with the brand, Hanhart can trace its history back to its founding in Dissenhofen, Switzerland in 1882. Twenty years later, the brand moved to Schwenningen, an epicenter of German watchmaking. The brand rose to prominence in a rather unexpected fashion, making its name by producing affordable mechanical stopwatches in the 1920s. Those stopwatches became mainstays at sporting events worldwide and now, almost a century later, the brand still manufactures their mechanical stopwatches almost entirely in-house. In the late 1920s, the brand utilized its expertise in stopwatches to introduce both pocket watches and wristwatches, eventually producing their first chronograph, the Calibre 40 (the progenitor to the PRIMUS line) in 1938. In the ensuing decades, Hanhart has produced a wide range of watches, but its primary focus has remained the chronograph. The Hanhart Desert Pilot Dark belongs to the PRIMUS line of technical mechanical chronographs — a line that is thoroughly modern yet retains some of the classic Hanhart design cues like the red chrono pusher. So, without further ado, let’s dive in. 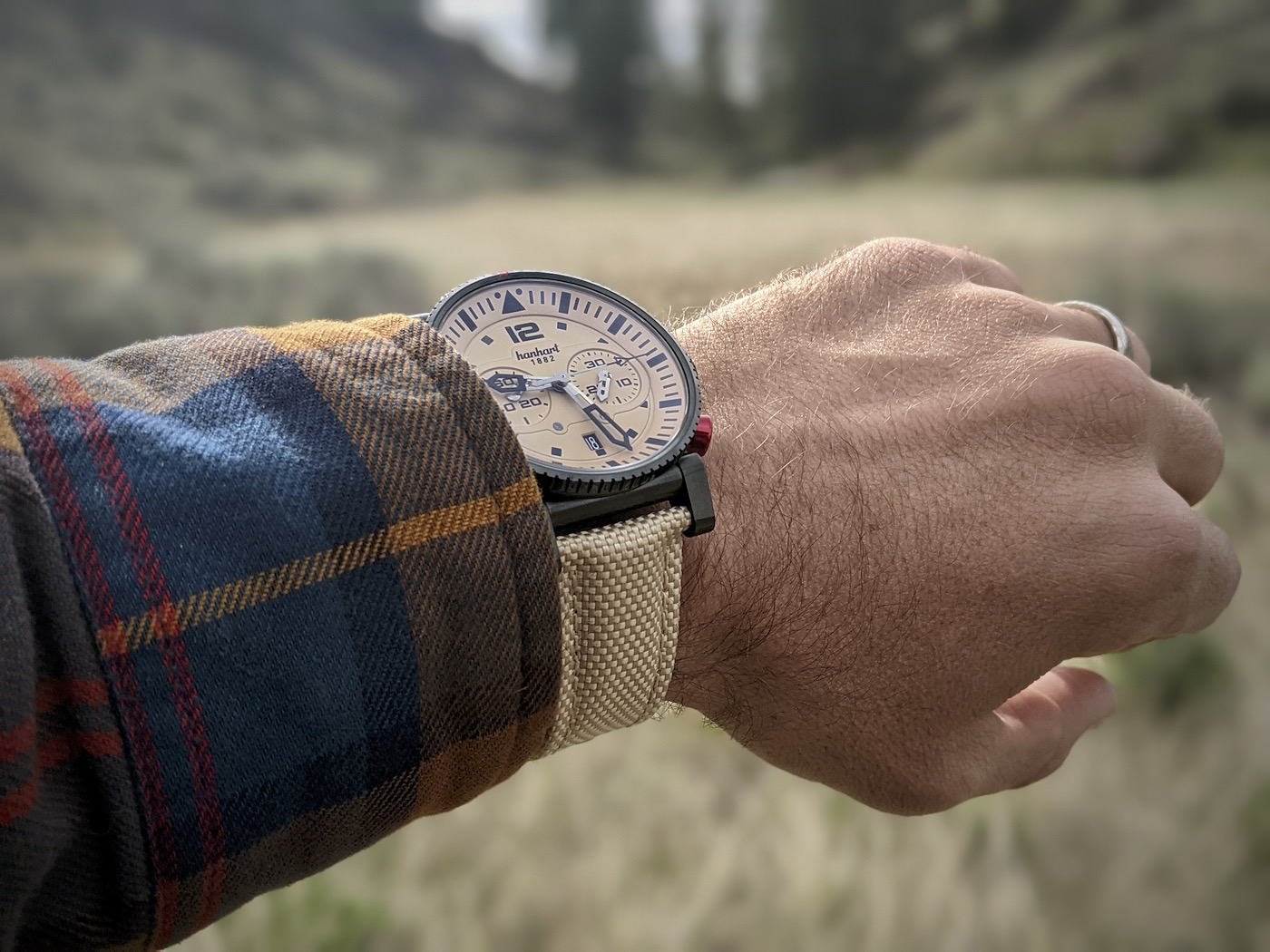 Let’s start by taking a close look at the case because it really is something special and unique. Coming in at 44mm in diameter with a thin bezel, the watch wears just as large as it appears on paper. However, take a closer look at those lugs and you will notice that they articulate, moving from 50-55mm, meaning that they conform to your wrist and will comfortably fit a wider range of wrist sizes than you might initially predict. My wrist is a relatively small 6.75” but I had no problem with comfort or wearability. Yes, it’s a large watch and it looks and feels that way, but it’s not uncomfortable or ungainly. That said, this is certainly not a watch to slip under your cuff with its 16mm case height that is due, in large part, to the thick Sellita SW510 automatic chronograph movement powering it. The watch comes equipped with a sapphire crystal with anti-reflective coating, a sapphire exhibition caseback, and 100m of water resistance. 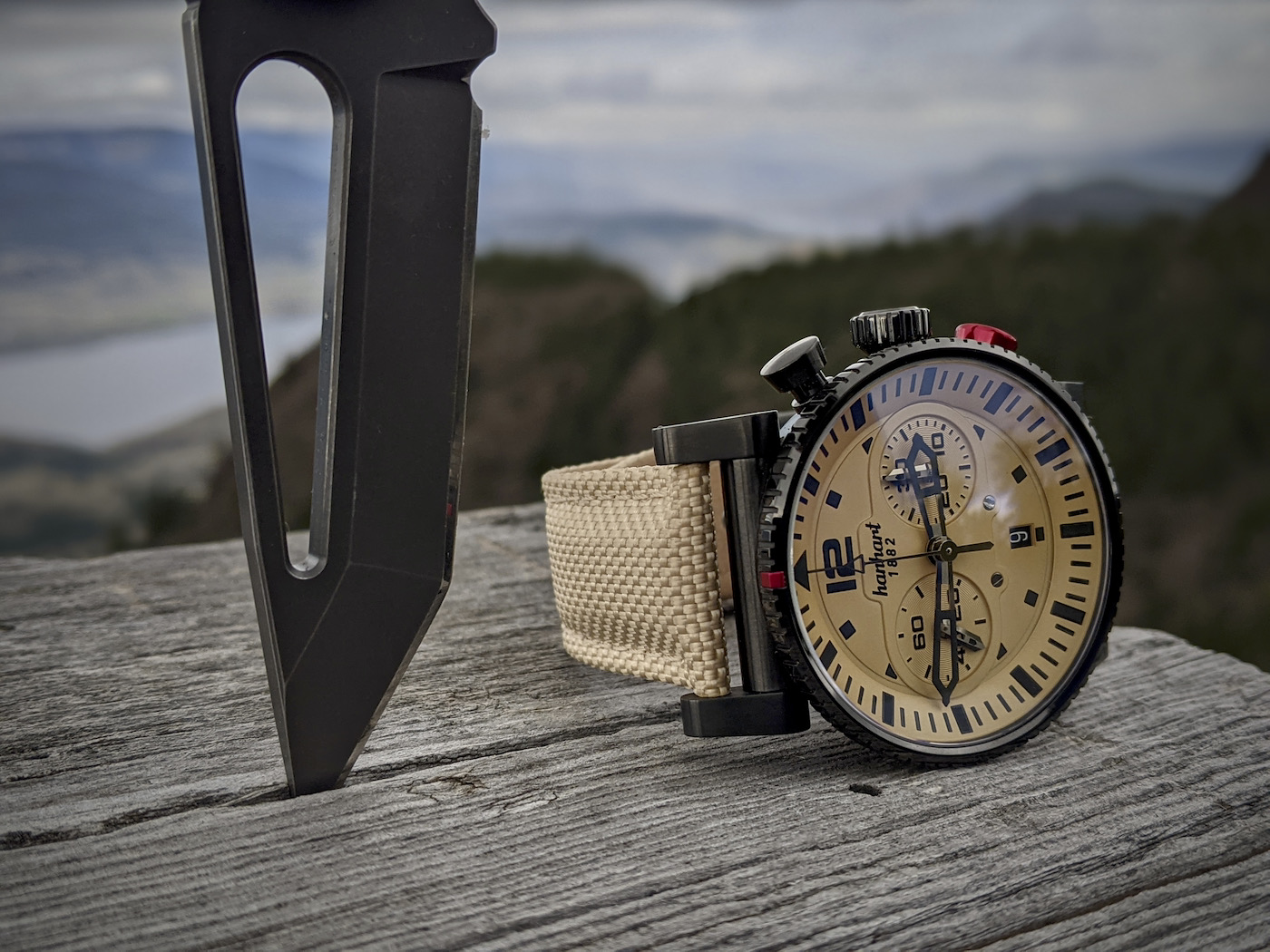 Unlike the non-limited version, the Desert Pilot Dark has an extremely hard DLC black coating, which gives the watch an aggressive aesthetic; however, the DLC does have a slight sheen to it, making it feel slightly less utilitarian or tool-like than it could have with a matte finish. But I have to admit I’m curious as to how a matte finish would have looked. Note: One thing that is impossible to miss is the bright-red anodized aluminum pusher at 4 o’clock and the small red marker on the bezel at 12 o’clock. Now, while the story may be apocryphal, the legend goes that a pilot’s wife used her red nail polish to coat the pilot’s pusher and always remind him of her. It’s a nice, romantic story. But there was also a very practical consideration to having a bright-red reset button. Anytime you see a bright-red button, you tend to pause before pushing it, and for pilots flying missions and tracking fuel usage, about the last thing they wanted to do was accidentally hit the reset button. Regardless, that bright-red anodized aluminum chrono pusher has become synonymous with the brand and, personally, I love it. 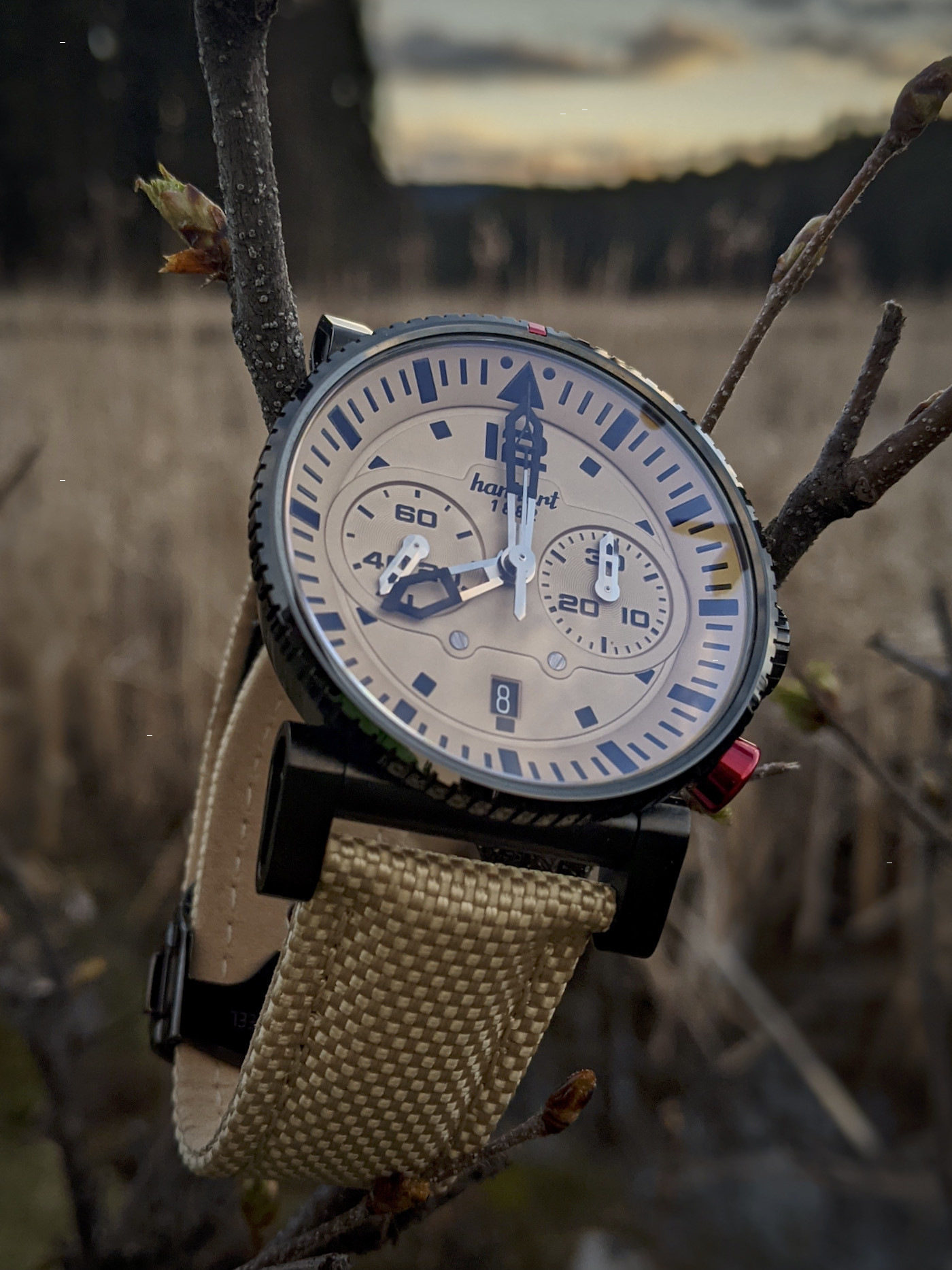 Moving onto the dial, Hanhart applies the same sand and black color scheme used in the non-limited desert pilot. The markers and numerals are bold and extremely legible; you will have no problem reading the time or tracking elapsed time on the chronograph. Speaking of which, the minute and hour hands are also skeletonized, allowing you to still see the registers even when the hand pass over top. Now, if you are worried about the lack of lume, don’t be. Hanhart actually uses black Super-LumiNova on the hands and hour markers. Just be aware that the lume will not be as bright or long-lasting as something like Super-LumiNova C3 or BGW9. Personally, I think that sacrifice is worth it as the color scheme would have been completely disrupted with the use of white hands and lume markers. At 6 o’clock, there is also a white-on-black date window. This is one of my small complaints. Given that Hanhart has done such an excellent job with color on this watch, I wish that they had used color-matched sand numerals rather than the standard stark white. 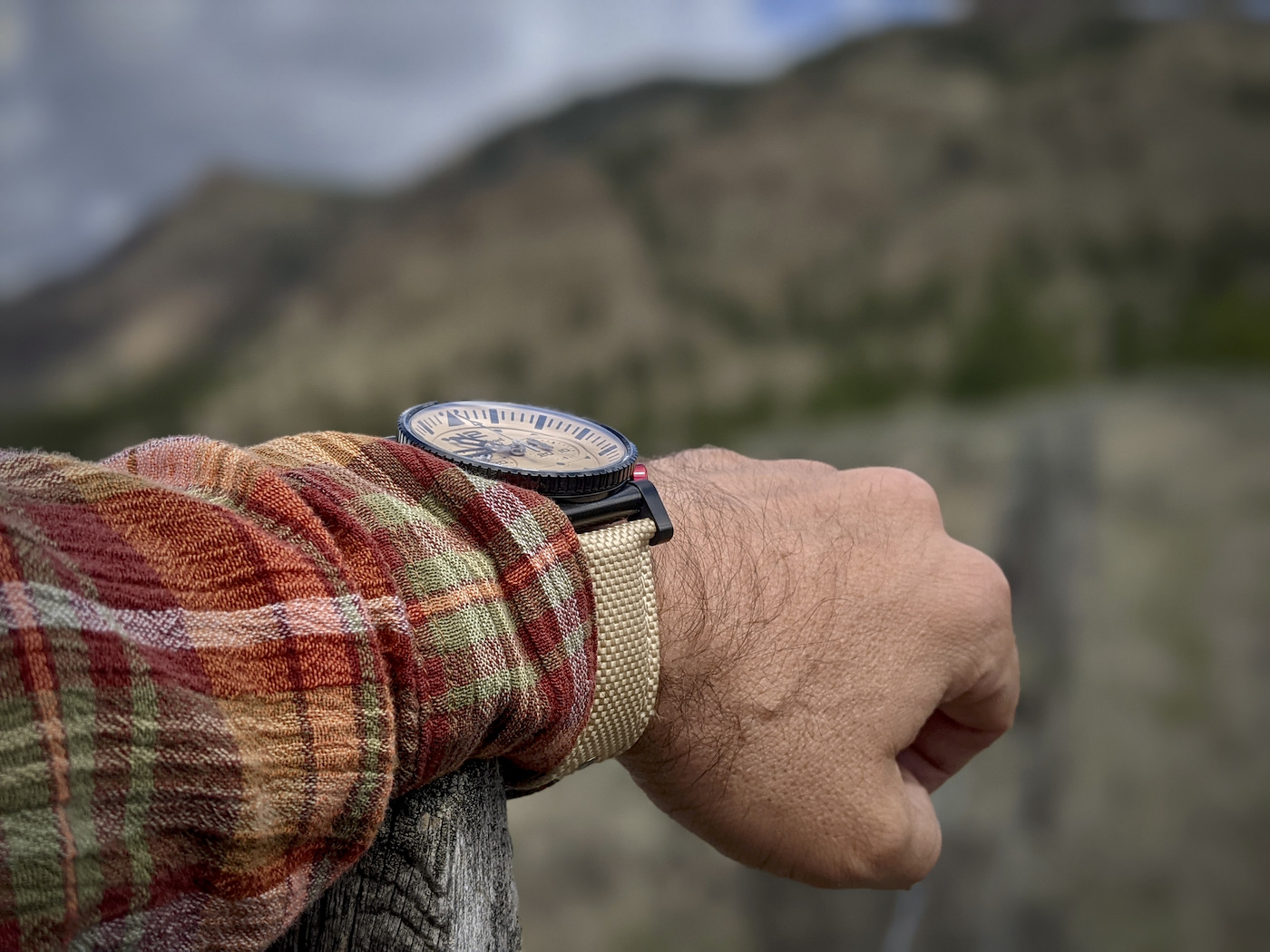 To be technical, I live in a semi-arid grassland, not a desert, but we get the white sage, prickly pear cactus, and scorching temperatures one often associates with deserts. Even though I spend a lot of time working out in the field in the summer, I never really think about matching my watch to the environment. However, I have to admit that I really felt like the desert pilot was made for the landscape. And this shouldn’t come as a surprise — as Hanhart’s Managing Director Felix Wallner explained it to me, Hanhart uses the PRIMUS line as “a playground for colors, but we’ve always kept them close to nature.” 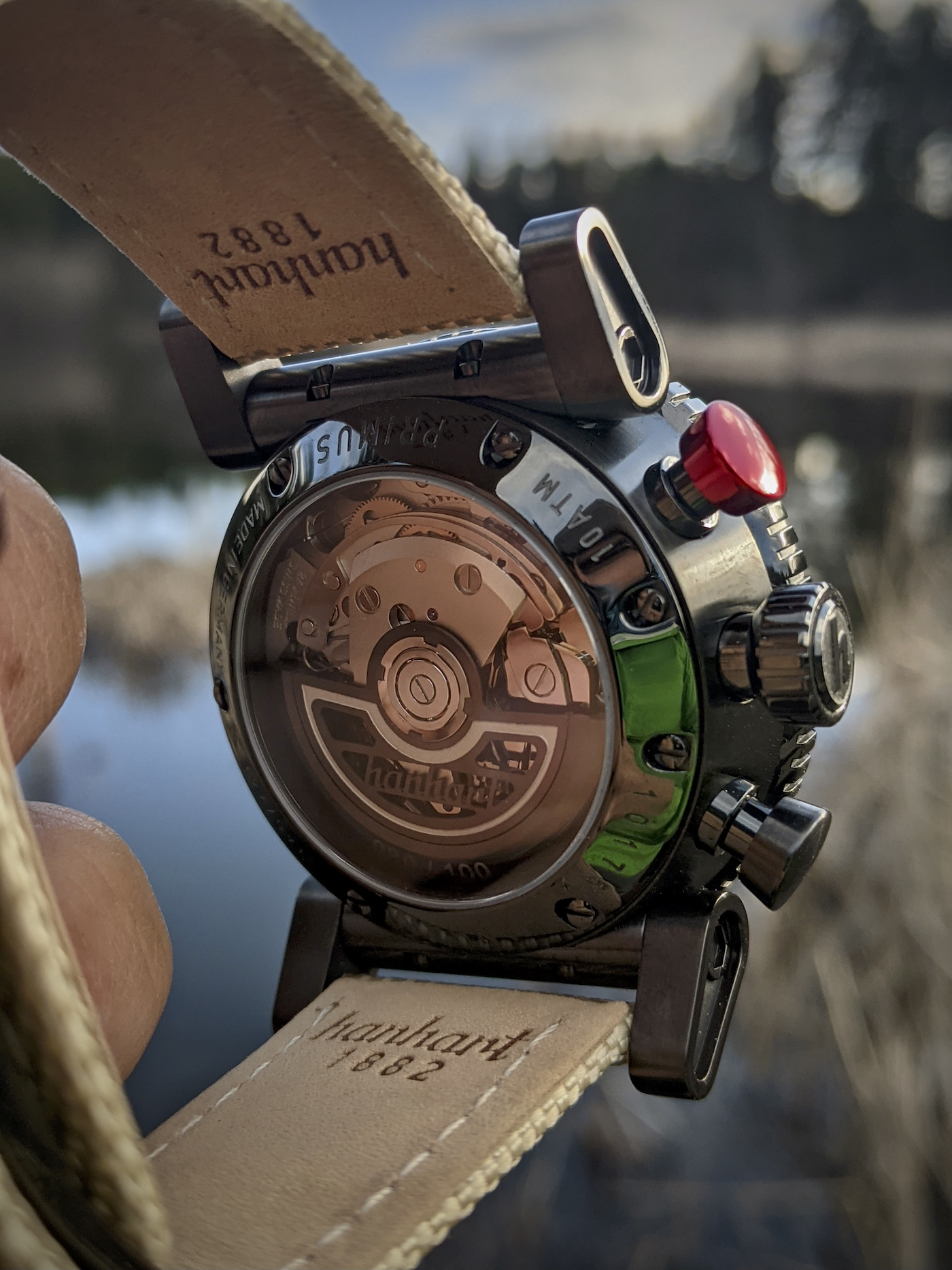 Powering the Desert Pilot Dark is the Sellita SW510 automatic chronograph movement. This is a cam-operated chronograph movement that utilizes a 60-second central seconds hand a 30-minute register at 3 o’clock and a running seconds at 9 o’clock. The movement beats at 28.8kbph and has a power reserve of 48 hours. 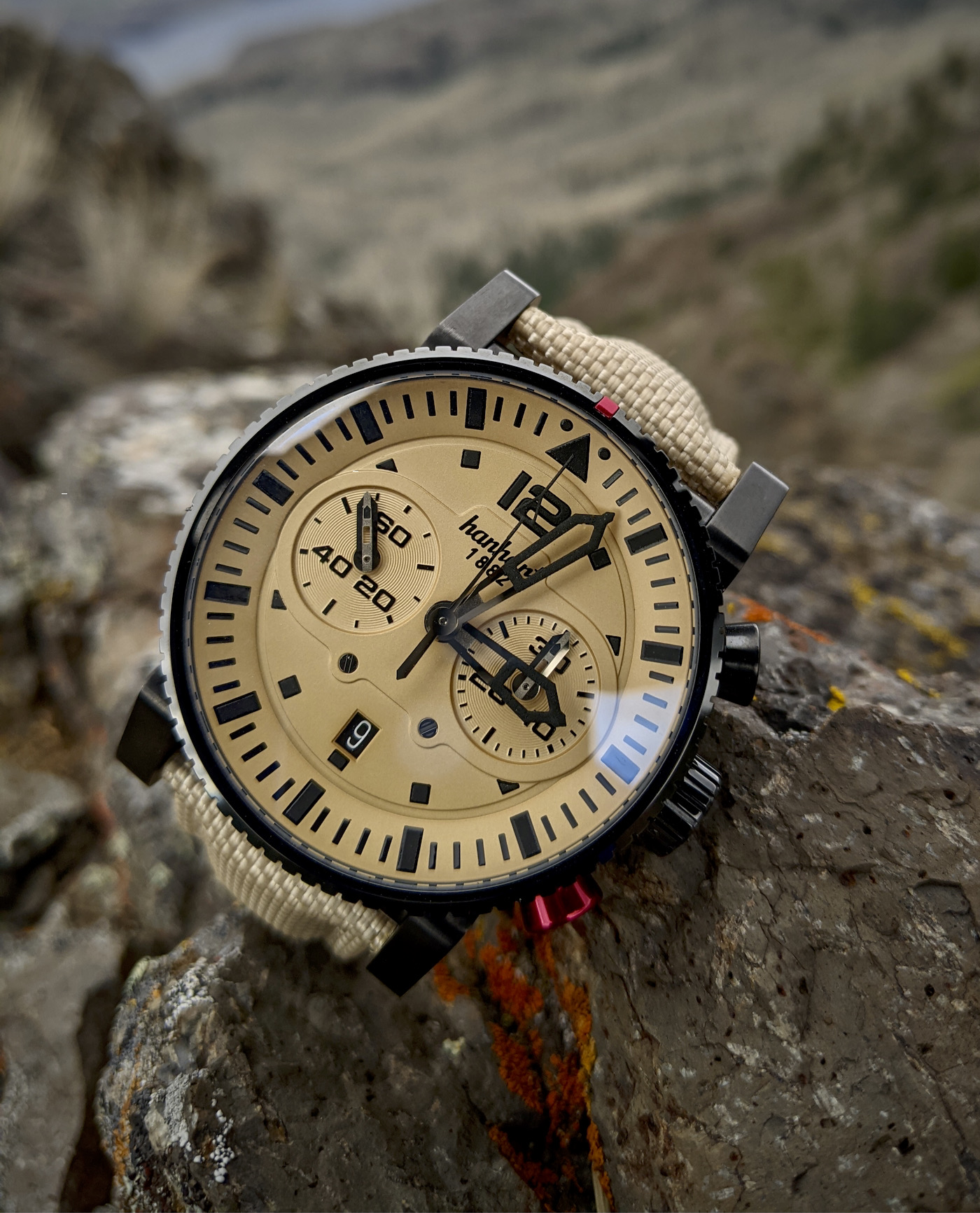 Typically, I tend not to dwell too much on straps that come with watches, as they can easily be swapped out for whatever your preference happens to be. However, in the case of the Desert Pilot Dark, I have to comment that this 24mm strap is an outstanding match to the desert sand dial and the textures on the textile strap, along with the deployant clasp (also DLC-coated), make for a superb combination. While I’m sure it would be fun to try this watch on different straps, it’s hard to imagine a better aesthetic fit. 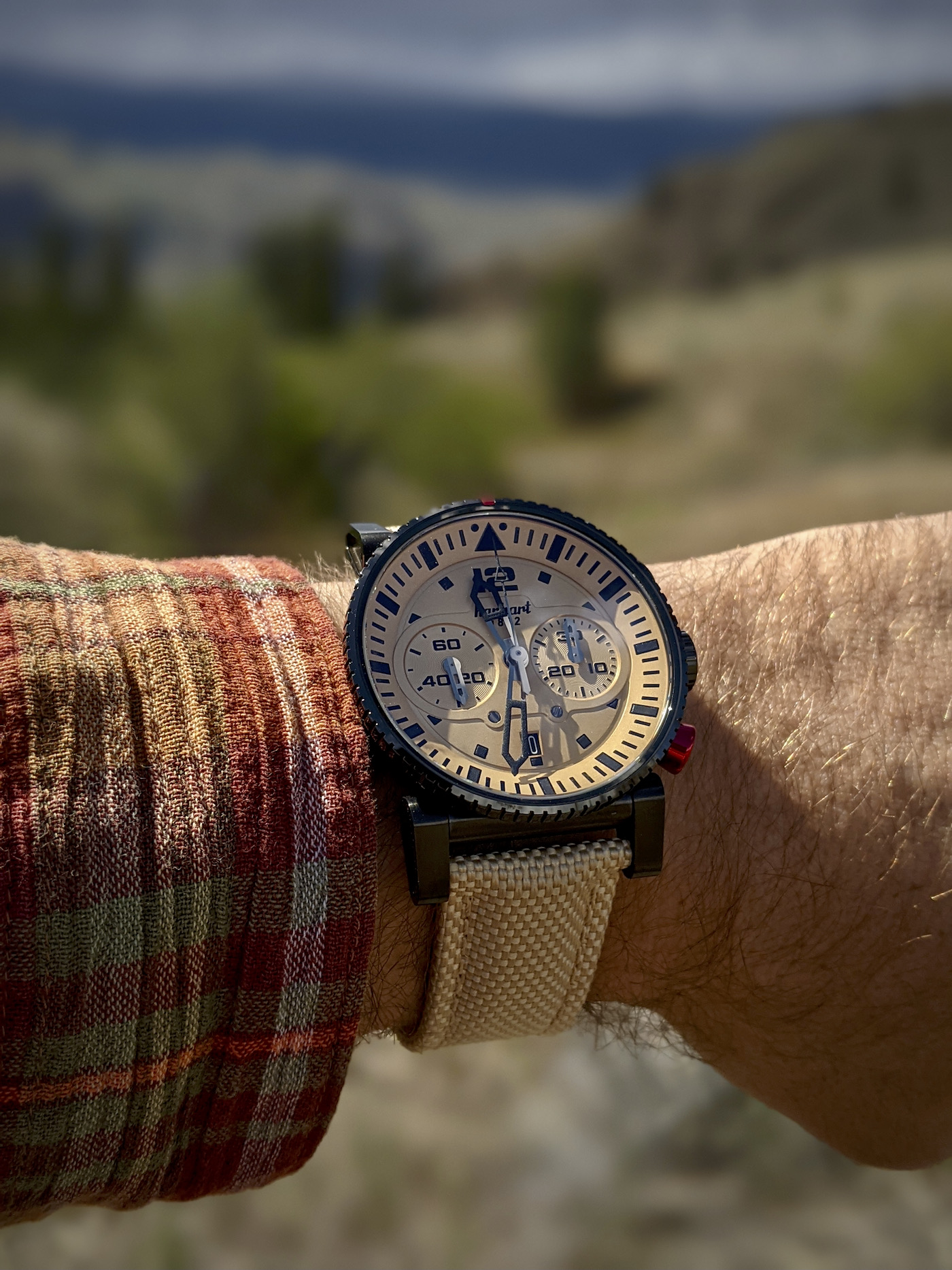 Now, I can’t finish this review without talking about the knife that comes along with it. In talking to Wallner, I asked him why Hanhart decided to include a knife, and the answer was simple. The Desert Pilot Dark is a bold, masculine watch, and it just seems fitting to include a bad-ass knife to go along with it (my description, not his). To do so, Hanhart teamed up with Austrian knifemaker Harald Stallegger (aka Aquarius) of Vulkanus. The result is the Vulkanus Hornet — a folding knife with an 8cm blade made from D2 steel (hardness of 61 HRC) equipped with a liner lock and moving on ceramic ball bearings. The knife can be easily disassembled and cleaned and comes with a belt pouch. Though I did not put the knife to the test with any bushcraft or the like, I did take it out for field work on a number of occasions and it was certainly up to the task. Maybe there will be some folks that would prefer not to have a knife and a bit of a lower price on the watch itself, but I personally enjoy it when brands add an extra something to limited editions like this to make them a bit more special. And, frankly, this is an excellent knife that I was happy to carry in the field in lieu of the Chris Reeve Small Sebenza or Spyderco Techno 2 I typically carry (for the knife geeks out there). 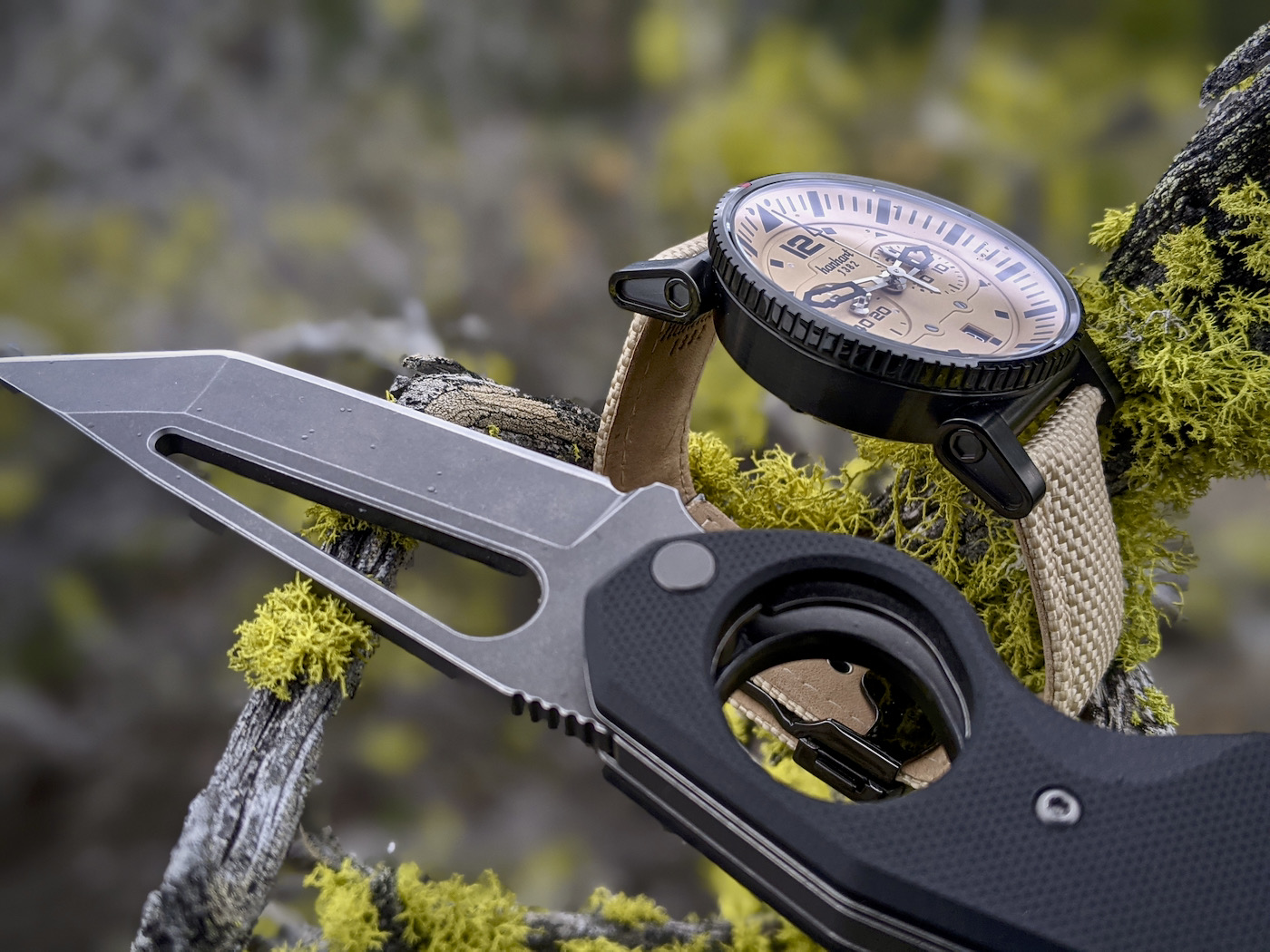 So, who is this watch for? I see the Hanhart Desert Pilot Dark as well-suited to someone looking for a large, well-engineered chronograph with a color scheme and aesthetic you won’t find elsewhere. If you want a throwback vintage chronograph, you can certainly find several in Hanhart’s lineup, but the PRIMUS is meant to be unapologetically modern. The articulating lugs mean that the watch will fit more wrists than the 44mm diameter might suggest, but you still need to be in the market for an unquestionably large watch. Hopefully, Hanhart will offer the PRIMUS line in 39-40mm versions, at some point. If the size and design cues work for you, and especially if you find yourself spending time in desert (or desert-like) environments, the Desert Pilot Dark is a superb companion for the field. Throw in the Vulkanus knife and you’re on the way to a well-appointed field kit. The Hanhart Desert Pilot Dark is limited to 100 pieces at a price of €3,090 (including shipping and 19% VAT). For more information, be sure to check out the brand’s website.

Necessary Data
>Brand: Hanhart
>Model: Desert Pilot Dark
>Price: €3090 including shipping and 19% VAT
>Size: 44mm-wide, 16mm-tall, 50-55mm lug-to-lug
>When reviewer would personally wear it: Long days spent out in the field.
>Friend we’d recommend it to first: Outdoorsy person looking for a large, robust chronograph with a unique aesthetic inspired by desert environments.
>Best characteristic of watch: Distinctive color scheme and excellent legibility; I also love the articulating lugs that allows a large watch to wear on a wider range of wrists.
>Worst characteristic of watch: Despite the articulating lugs, this is still a large watch and I would love to see it offered in a smaller-diameter version.