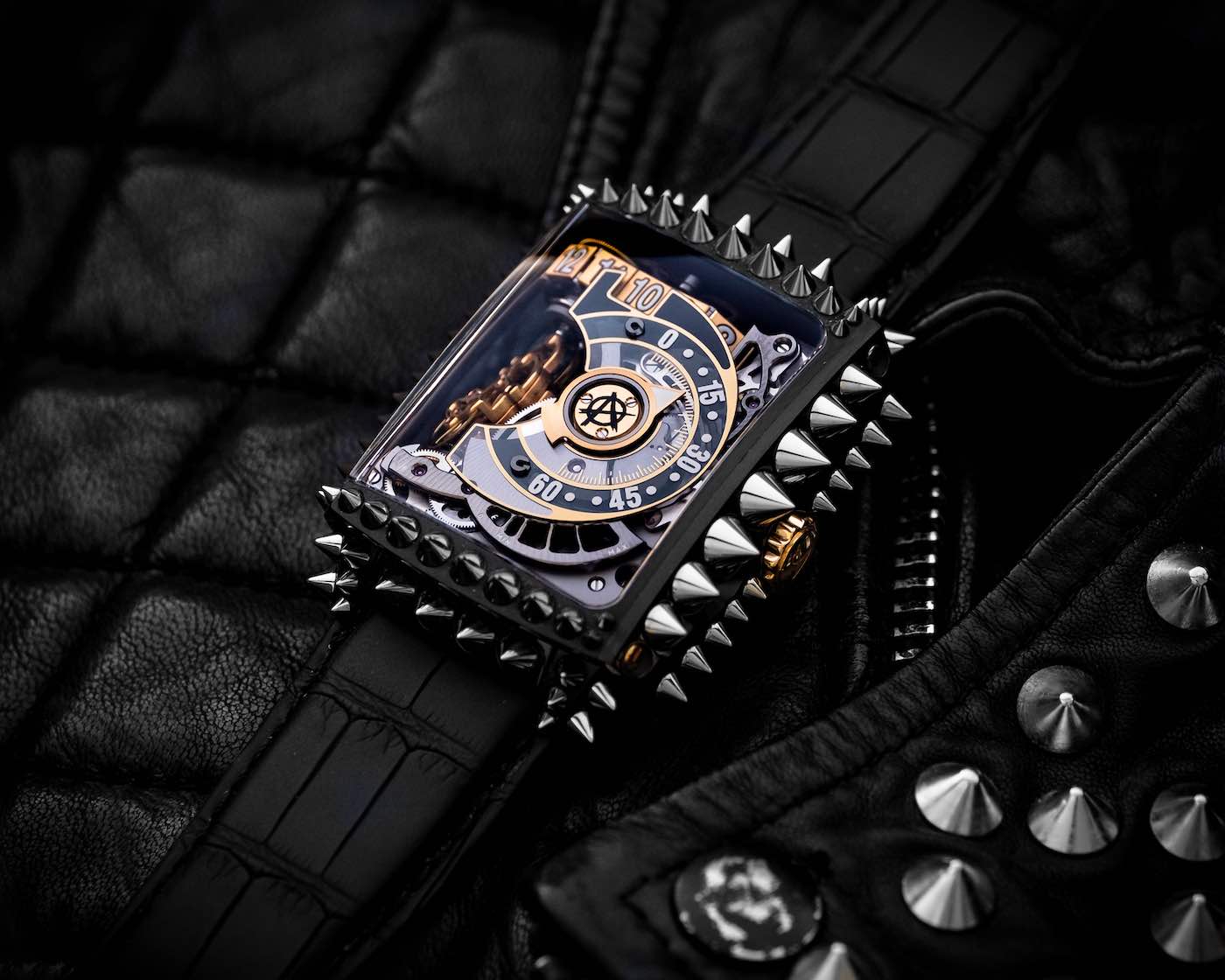 Fifteen years have passed since Hautlence first burst onto the scene. In that decade-and-a-half, the whole watch industry has shed its skin many times and is a very different beast from the one the Neuchâtel-based brand saw when it stepped, blinking, into the light. Launched during what now looks like the heydey of modern mechanical watchmaking, Hautelnce was always trying to break conventions, be it through technological advancements, novel ways of doing tried and tested things, or simply teasing our intellect with engaging, thought-provoking displays. And once upon a time, Hautlence even released a watch that didn’t tell the time. So, to say that this, the Hautlence HL2.3 PUNK watch, is the craziest thing the brand has done might be a tad hyperbolic. But it’s pretty damn close. 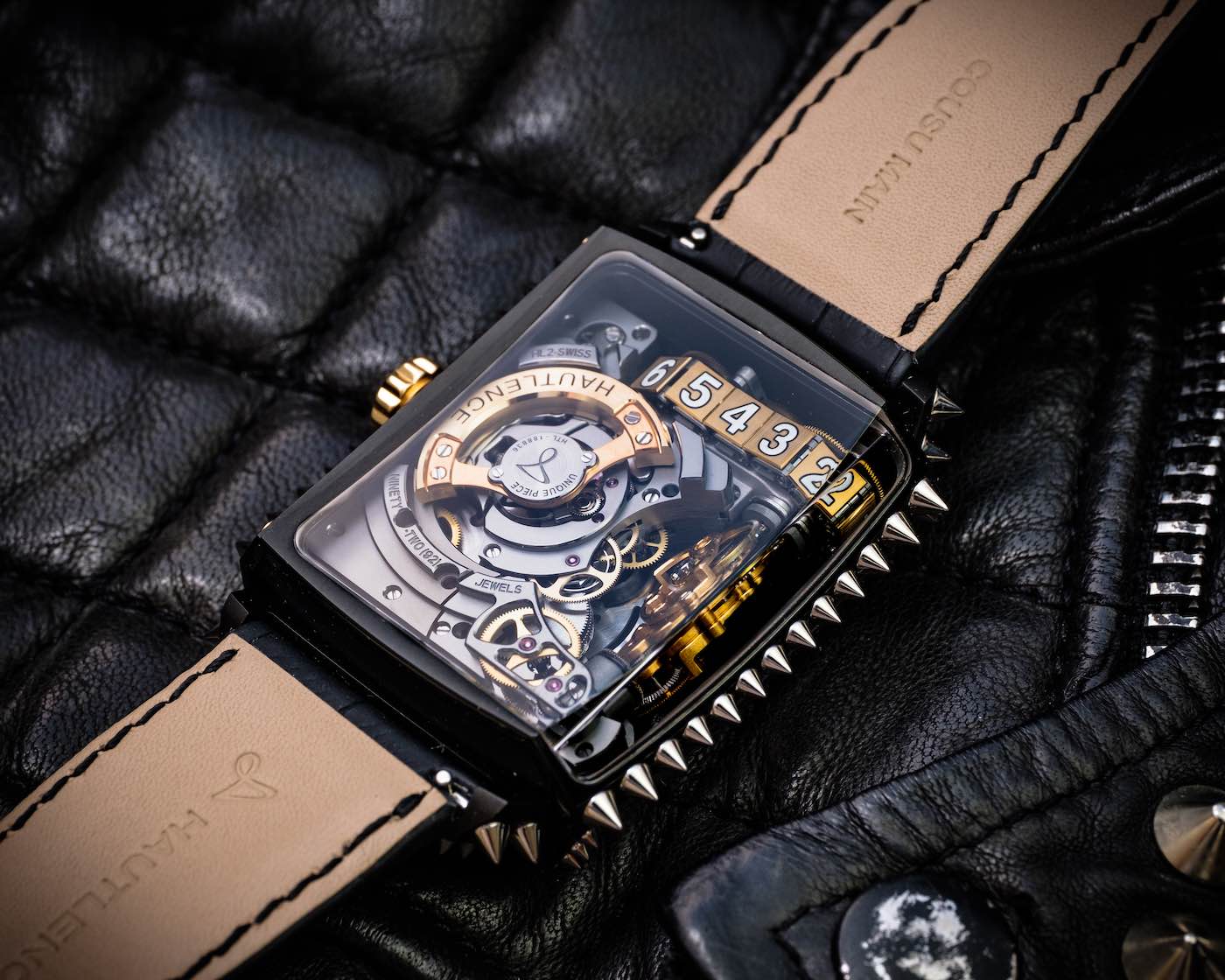 Rather than dancing around the incredibly spiky elephant in the room, I’ll address it head-on: What you make of the Hautlence HL2.3 PUNK watch will really begin and end with your feelings toward the case: 84 polished stainless steel studs of 14 different sizes adorn the outside of the case. The design honors the legendary Perfecto jacket, which was one of the most recognizable and enduring fashion items of the era. 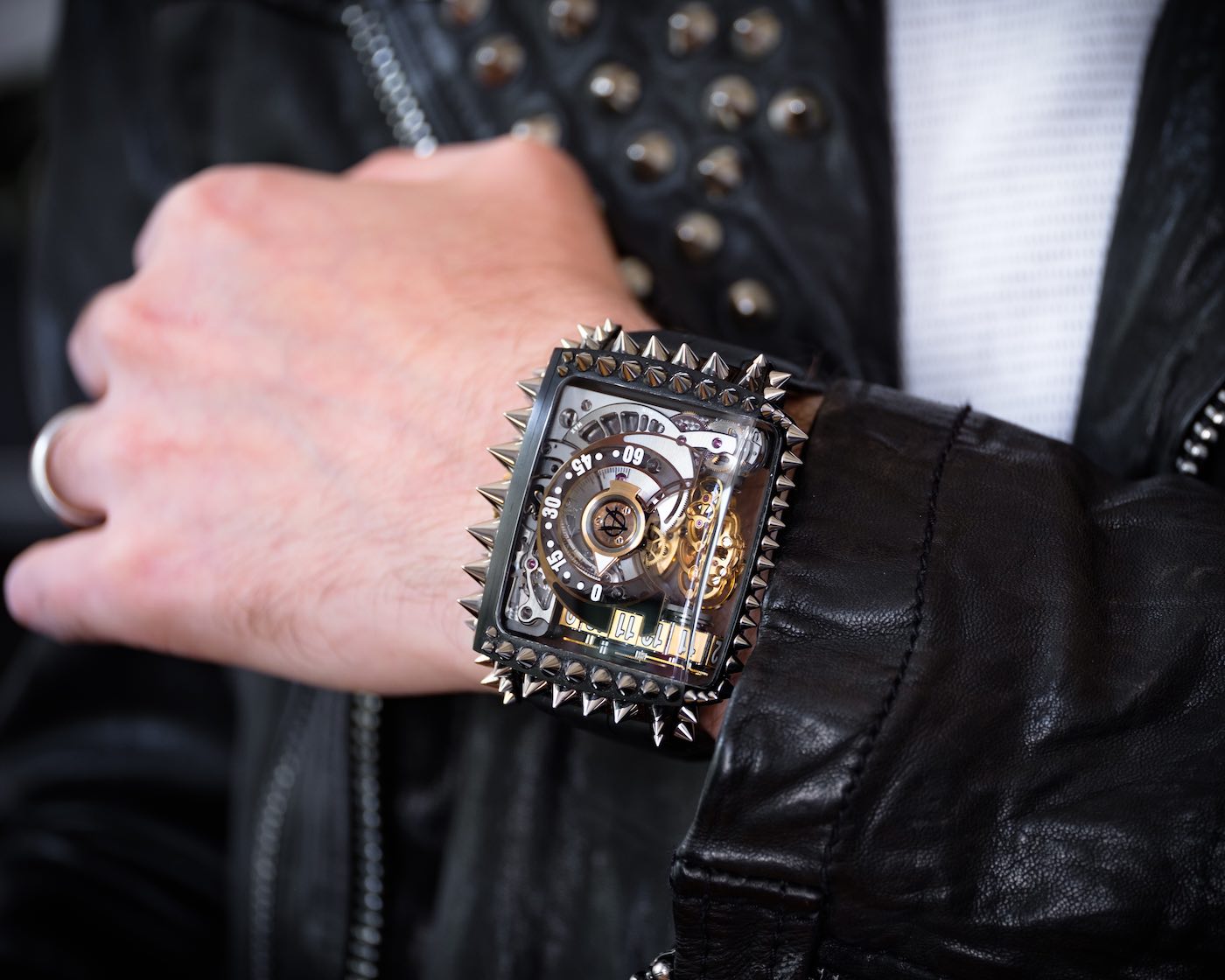 The case middle and lugs are crafted from titanium and coated with a black PVD treatment. The studs themselves range in diameter from a diminutive 1.75mm all the way up to 5.75mm. With conscious flair, the screws used for the caseback and lugs have been crafted from 4N rose gold to match the crown. The case gets its distinctive open look from three scratch-resistant sapphire crystals that are painstakingly created using multi-axis grinding to ensure a perfect fit. 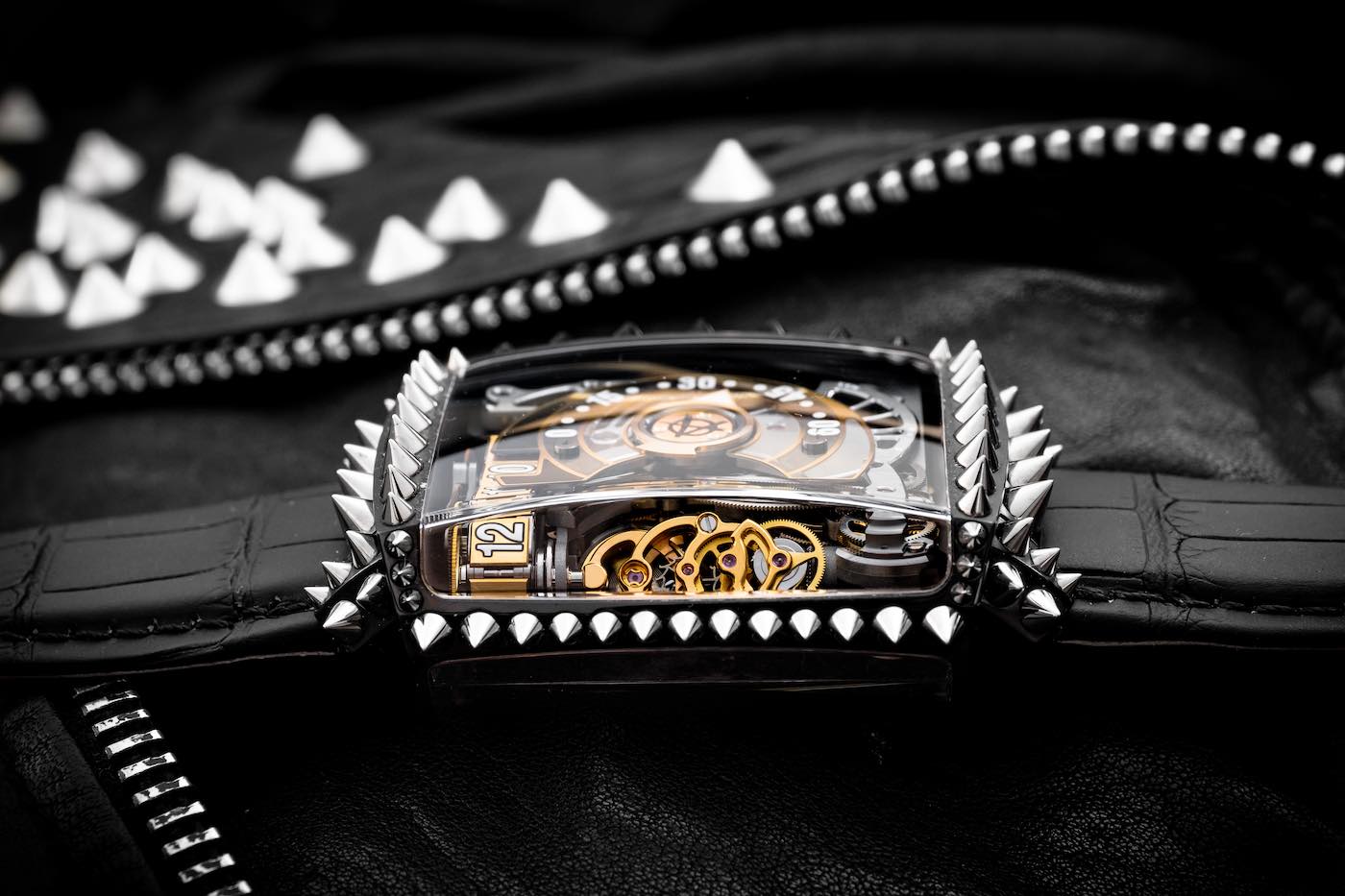 The Movement and Dial

Ticking away inside the HL2.3 PUNK is caliber HL2.0. The HL2.0 pairs a jumping-hour hand and a retrograde minute display, along with a power-reserve indicator. While the result is a surprisingly clean and legible display, with the iconic “Circle-A” of the Libertarian movement decorating the substantial minute hand the only notably whimsy, there is quite a lot of high-level tech going on behind the scenes. 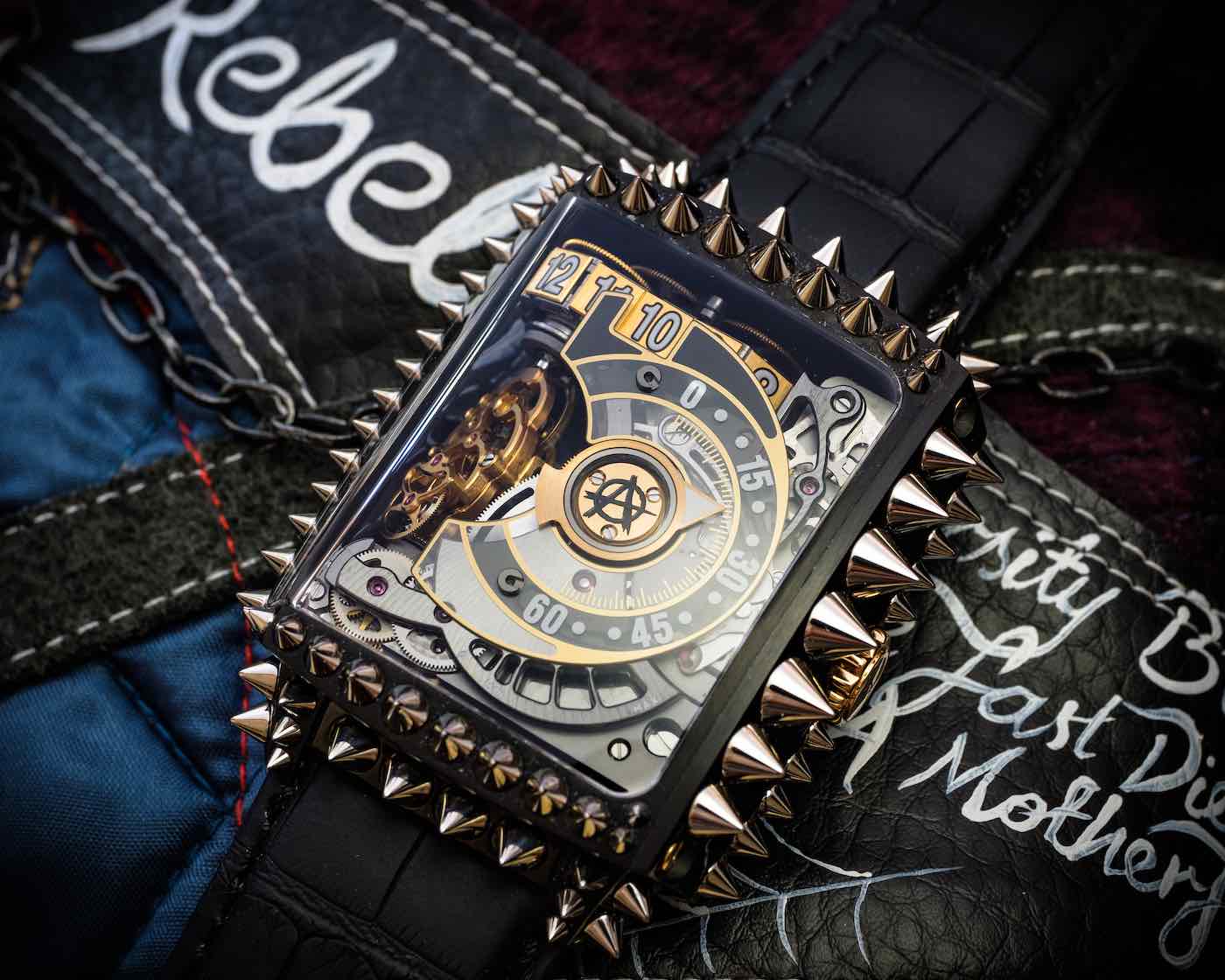 You see that jumping-hour complication? Notice how each hour is mounted on a chain link, connecting all 12 to each other and also to an axis that bears the entire escapement. That means every hour when the chain advances, the escapement (which is the timekeeping element of the watch) is rotated by 60 degrees, which will theoretically reduce the influence of gravity on the hairspring during normal wear. Obviously, a complication like this requires quite a lot of power to be driven. The normal mainspring in its barrel is charged by the automatic weight and winds a second, smaller barrel that is used to power the jump and movement rotation. To reduce the load on the mainspring, the operating speed of this in-house caliber has been set at 18,000 vibrations per hour, resulting in a power reserve of 45 hours. The dial is a multi-layered sapphire construction treated with luminescent material so the watch can still be read no matter how dark the nightclub gets. 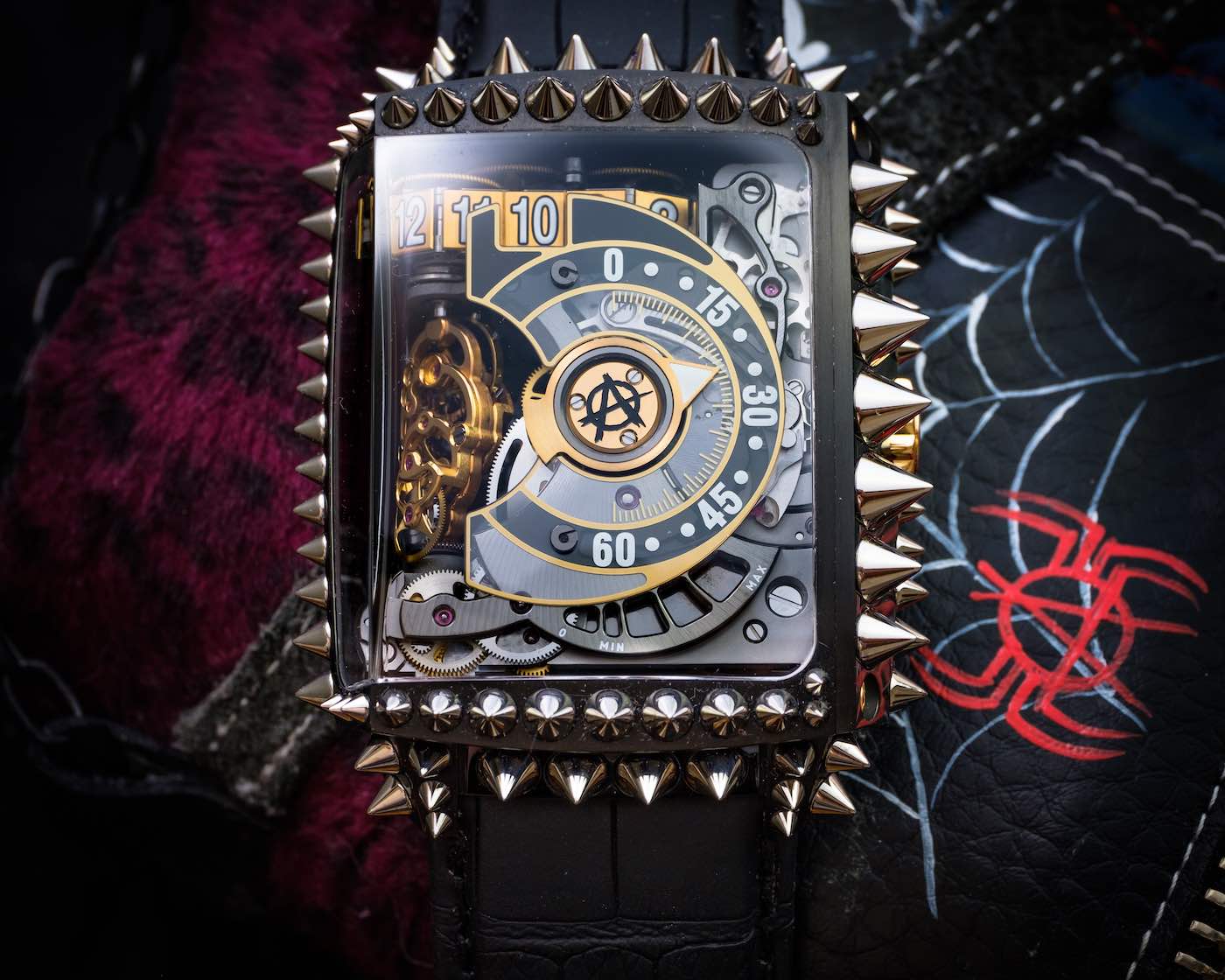 In the past, I’ve often greeted Hautlence creations with a roll of the eyes and the conviction that they had, once again, gone too far — often, way, way too far. Well, the Hautlence HL2.3 PUNK watch turns that idea on its head. There’s no denying that this watch has gone so far beyond what I was expecting that it is wandering around in the no-man’s-land of my mind map, having passed the edge of all surveyed sense. And yet, somehow (and I can’t believe I’m saying this), it really, really works. 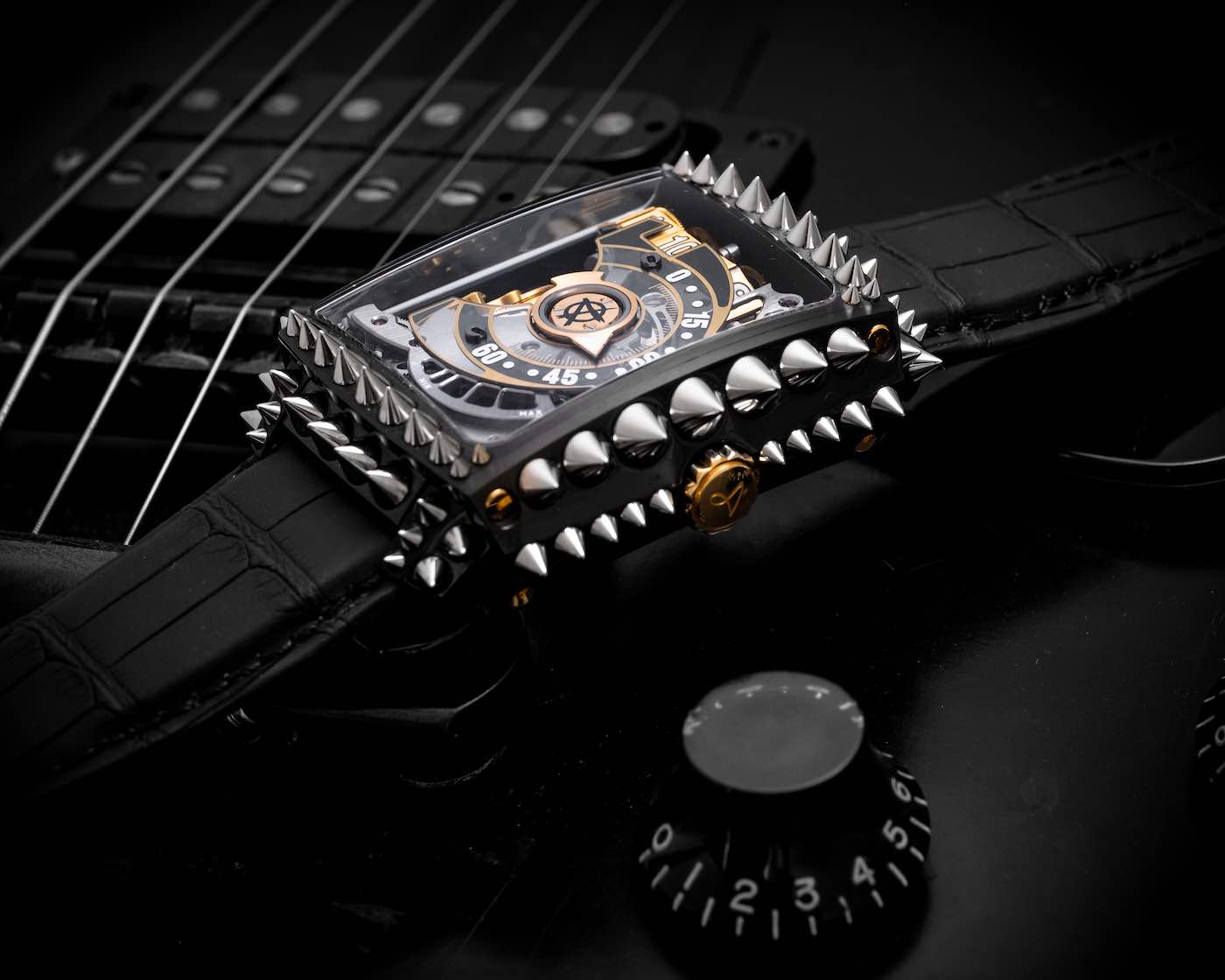 It would seem that I was wrong. “Too far” wasn’t nearly far enough. This absolutely bonkers creation is perhaps preserved in my mind as genius rather than madness thanks to the uncompromisingly excellent finishing of each and every component. The gloriously precise case spikes are the best element of this design. Such absolute conviction to a concept combined with meticulous manufacturing is the recipe for success. And as divisive, wild, and ridiculously unattainable as the Hautlence HL2.3 PUNK watch is, it is a brilliant example of everything it set out to be — a true rebel and, quite literally, one of a kind. To learn more about this unique piece, head over to hautlence.com.