HD3 Slyde Watch Hands-On: What Everyone Wanted The iPod Nano To Be 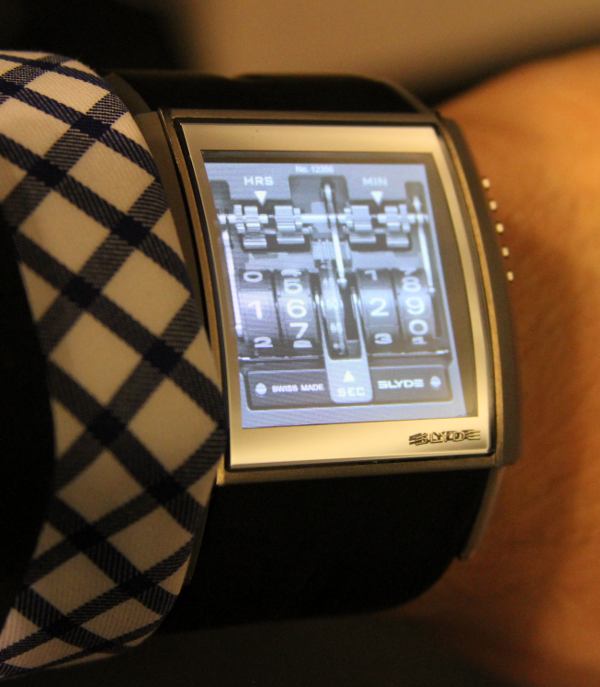 A few months ago I get a message from Jorg Hysek Jr. – son of the famous Jorg Hysek – who now runs Hysek’s brand HD3. In excitement, he expressed to me how much I need to see the brand’s new watch collection called “Slyde.” Nothing more, just that. It turns out I was right about the excitement. HD3 was quietly developing Slyde for 2 years before telling anyone, and it must have been hard to keep the awesome concept a secret. The final products won’t be available until about September 2011, but I have an exclusive hands-on introduction of Slyde to share with you.

target=”_blank”>Slyde is essentially what everyone wanted the fifth generation iPod Nano to be. You know the little square one that everyone turned into a watch due to the clock dial face it has. I wrote about it is here and explained what it needed to do to satisfy the loads of people buying straps for it. The real problem with the Apple iPod Nano is that it wasn’t really meant to be a watch. Battery life sucked and it had just two watch dials. People started to say that Apple would make a fortune if they would just create an app store to make it so that people could upload new watch dials to the Nano – that isn’t likely to happen. 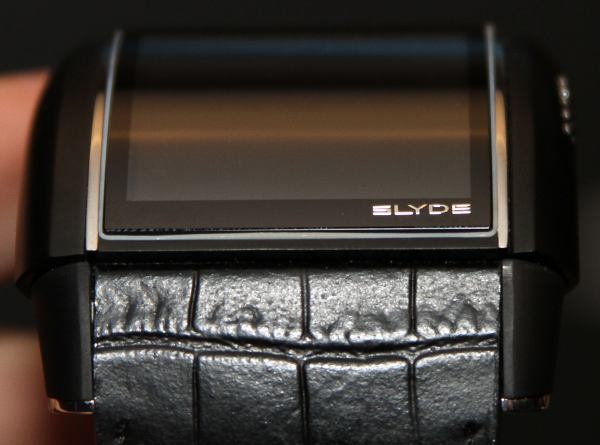 But it will happen with the Slyde watch – which started development before that Nano came out. Slyde is a high-end Swiss watch with a digital LCD touch screen (might be OLED variant screen in the future), topped with a curved sapphire crystal. I am not too sure about the dimensions yet, but it is large – though not unwearably large. By the way, the watch isn’t out yet and technical details haven’t been finalized. So wait a few months to answer all those questions forming in your mind.

The watches here are in titanium, one in black PVD (which looks killer). The watch will come in a few materials, with gold options as well, and various finishes. You can see models here with leather and rubber straps (double straps in typical HD3 fashion). They are not wild in design like some ultra high-end HD3 watches, nor are they too basic looking. The style is very Swiss, very polished, and beautifully modern. The use of materials and design ensure that when the Chinese eventually try to copy the concept, their watches simply won’t look or feel as good as the Slyde. Oh, and the cases are water resistant to 30 meters, with the final versions having “HD3” on the front of the watch and “Slyde” on the back. 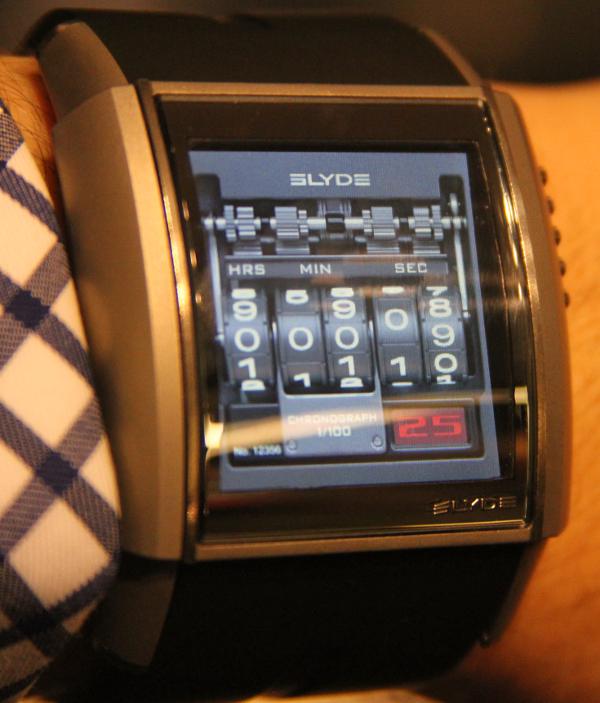 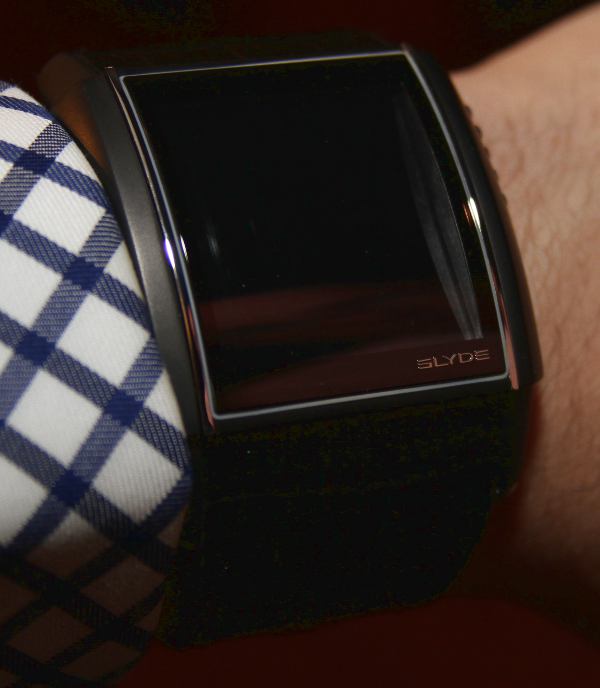 There are no buttons on the watch, just three battery indicator lights on the side and a light sensor to automatically adapt the brightness of the screen. Everything will be controlled with taps or slides on the touchscreen. Of course, the name “Slyde” comes from the idea that you slide your fingers over the dial. HD3 tells me that when using the watch 30 or so times a day, you should have about a week of battery life. Also, you can send your watch back in to upgrade the hardware in the future. 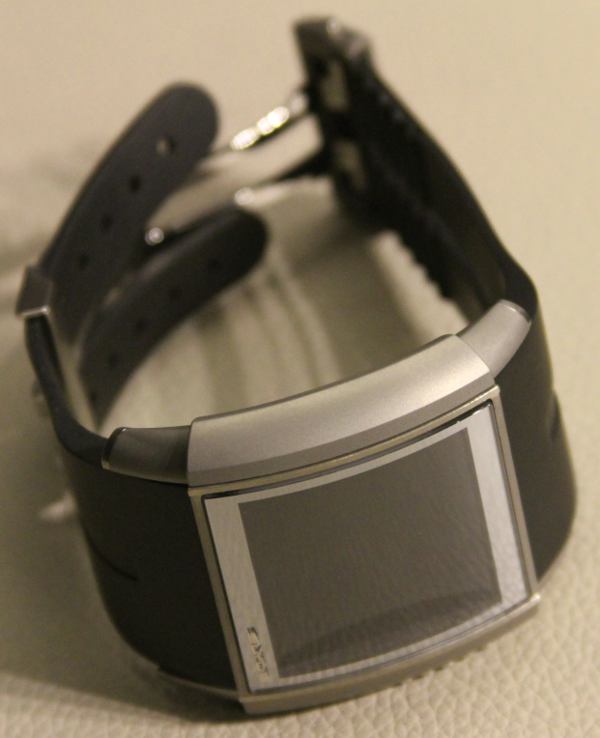 To charge the watch, you’ll need to put it in a charging dock that it slides into (more sliding). The dock charges it and also has a USB connection for hooking it up to your computer and the Internet. This is where the magic happens. You can purchase special watch dials to put in the watch. HD3 will release just a few a year. They want to make sure each is good, and not over-load people with crap dials. But the dials won’t be cheap. Some of them will even be artificial limited editions – where HD3 will only sell a certain amount. Standard prices for dials will be $50-100 maybe, and more for the special ones. Hysek himself will design many (and he is proven to be amazing at this), and they will also have all sorts of guest designers from a pool of some of the best guys in the watch industry. I am really excited about this part. 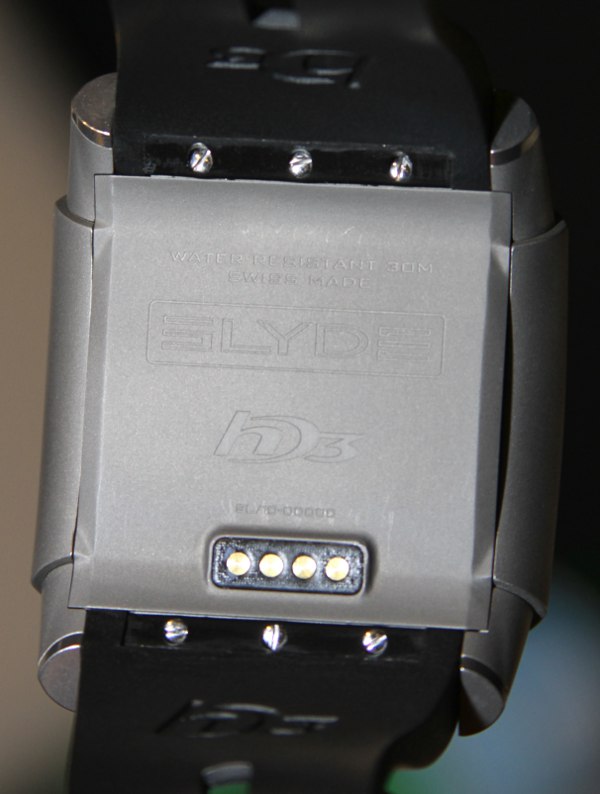 Slyde comes loaded with a series of watch dial screens. There are also screens for other functions such as a chronograph, calendar, moon phase indicator, etc… The system also lets you upload your own images and have them be watch dials as well. HD3 is working with a software developer, so everything will be specially made for them. The model here in the video is a prototype. It will be faster and more smooth when things are done for the production models.

The concept is an instant smile maker. The watch is super cool, and you probably already want one – I know I do. One of the things that is really exciting, is that Hysek and other watch designers who will participate in making the dials can now offer things that mechanical watch’s don’t allow. This opens up a whole worlds of fascinating concepts that are really only limited by the imagination. Prices for the Slyde watches will start at about $5000. Not cheap , but not crazy expensive either. HD3 will sell a lot, and rightly so. I can’t wait to see the final product this fall.