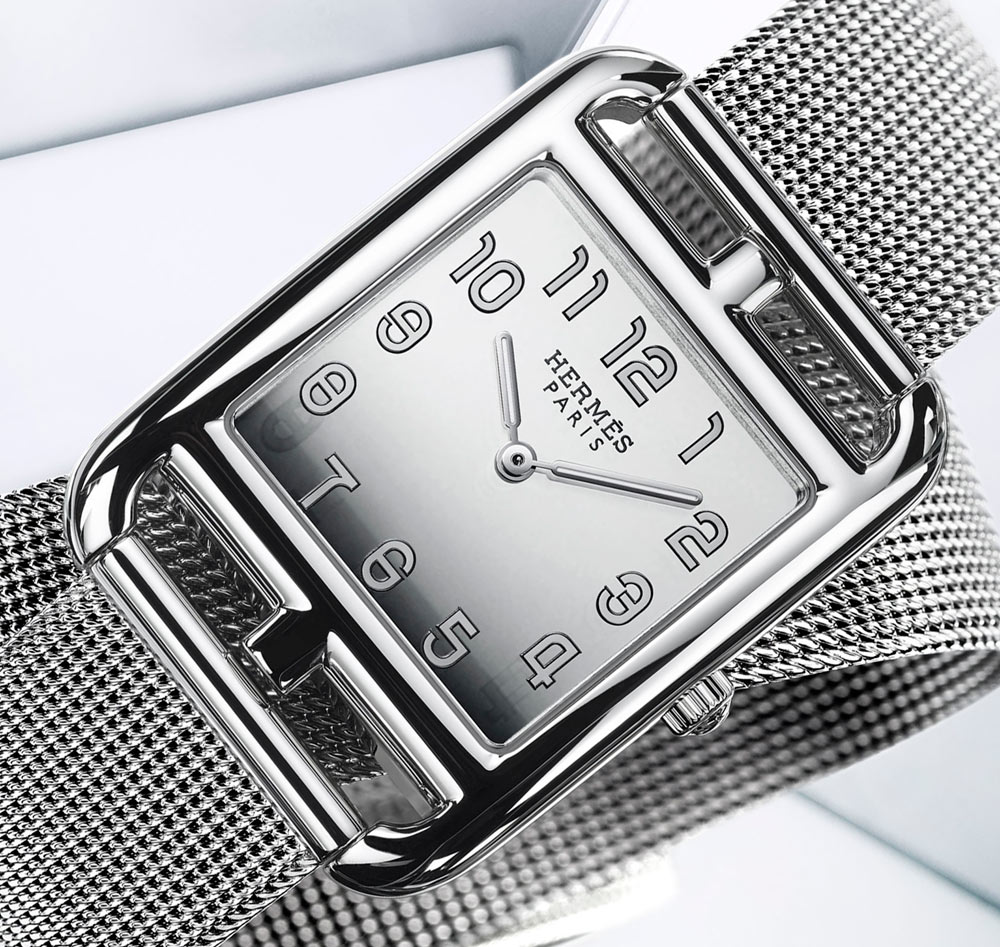 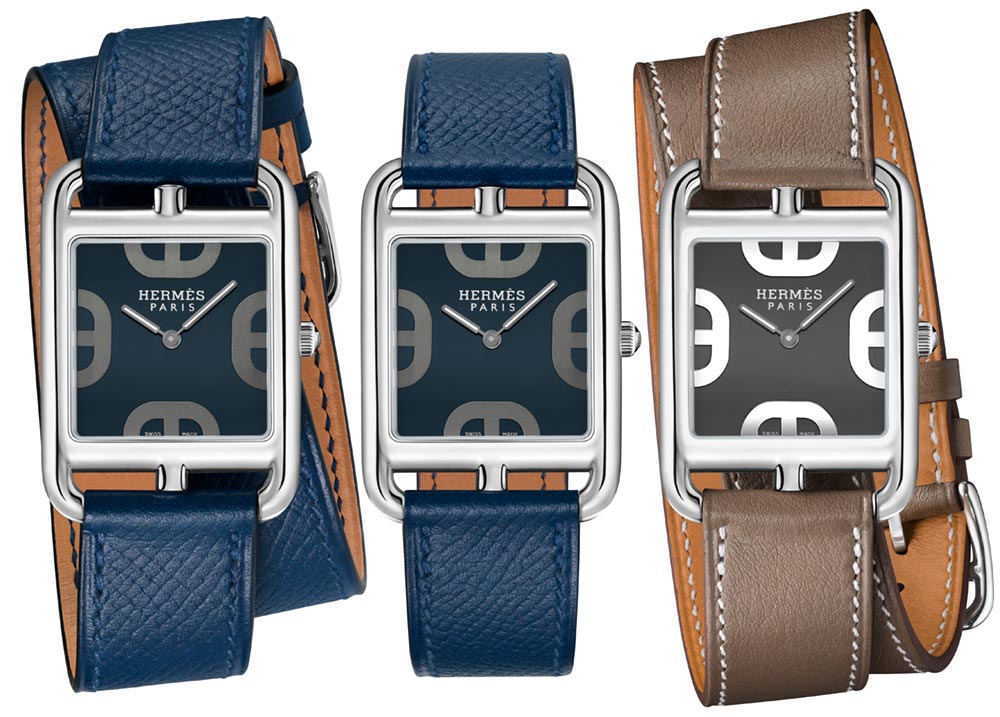 The new Hermès Cape Cod models are part of the brand’s ongoing aim to maintain this as a current, full collection that runs the gamut from high-end to very accessible, with a wide range of options and price points. The iconic Cape Cod now has a broad recognition factor at all levels because Hermès has made sure to offer something for everyone. What’s new for 2018 are eight new options in the series, including two sizes and double or single straps with two color options ranging in price from $3,000 to $4,300. 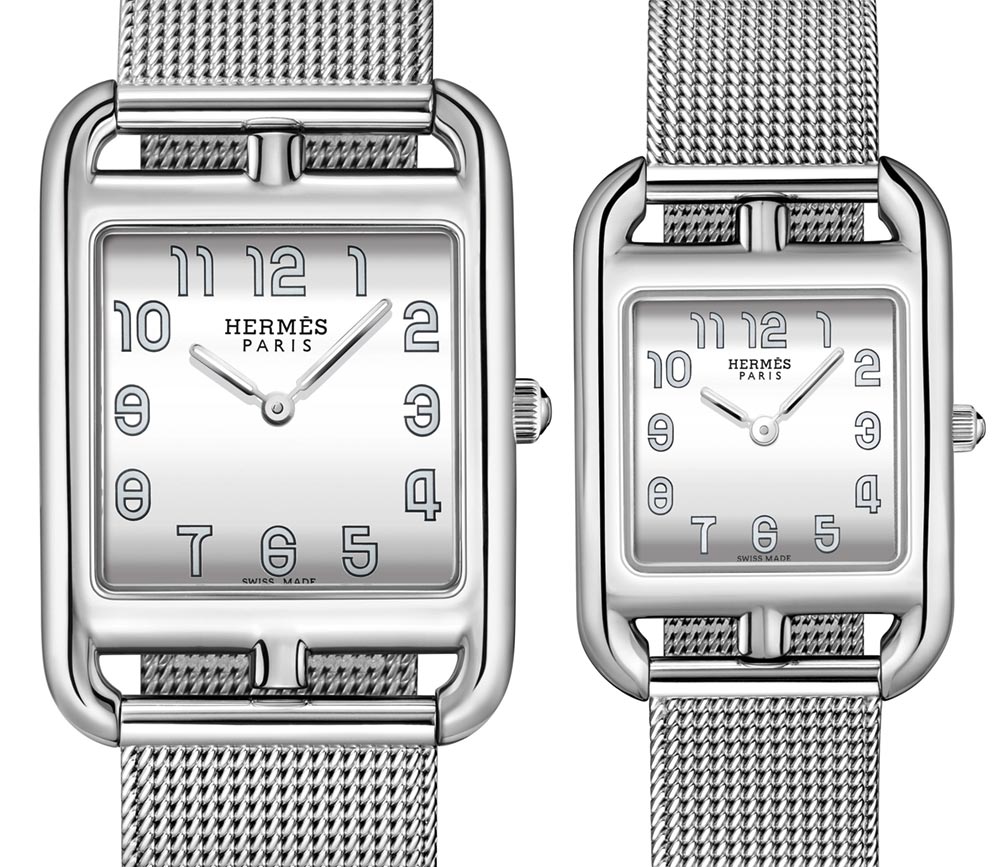 Surprisingly, there is even a mesh-style bracelet option, something we haven’t seen in this collection before. It’s unusual to see a bracelet at all on an Hermès watch, which makes sense because it is a leather goods company, and straps are an important brand-identifying element of the watch division. The company’s expertise in leather straps is well recognized in the industry – Hermès makes straps for Parmigiani Fleurier and Apple. 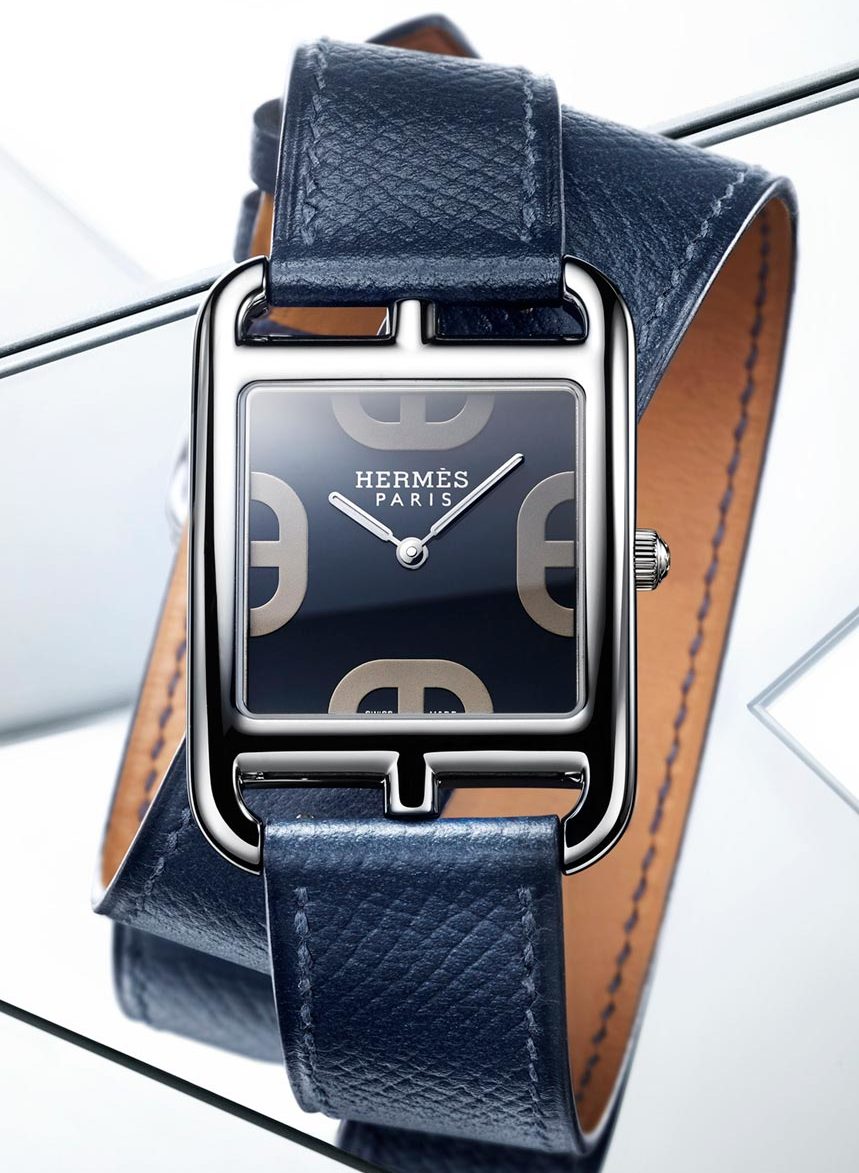 The bracelet version of the new Cape Cod series has a rhodium-plated dial with a mirror-polished surface that is coated with a translucent lacquer. There are two sizes, with either a single bracelet or a “double tour” version that wraps around the wrist twice. The double tour allows the strap to be worn loosely, and gives it a bracelet-like quality. It comes in two sizes – large (29 x 29mm, with a lug width of 19mm) and small (23 x 23mm, with a lug width of 14mm). The cases are made of 316L steel. There is a strap version of the large size, in either étoupe (dark beige) or Malta blue, in single or double tour styles. The dial of the étoupe version is given a “black gold” treatment, and the Malta blue version has a blue lacquer dial. Instead of Arabic numerals, the dials of these two versions are decorated with four anchor chain motifs, a signature symbol of the Cape code line, at 12, 3, 6 and 9 o’clock. 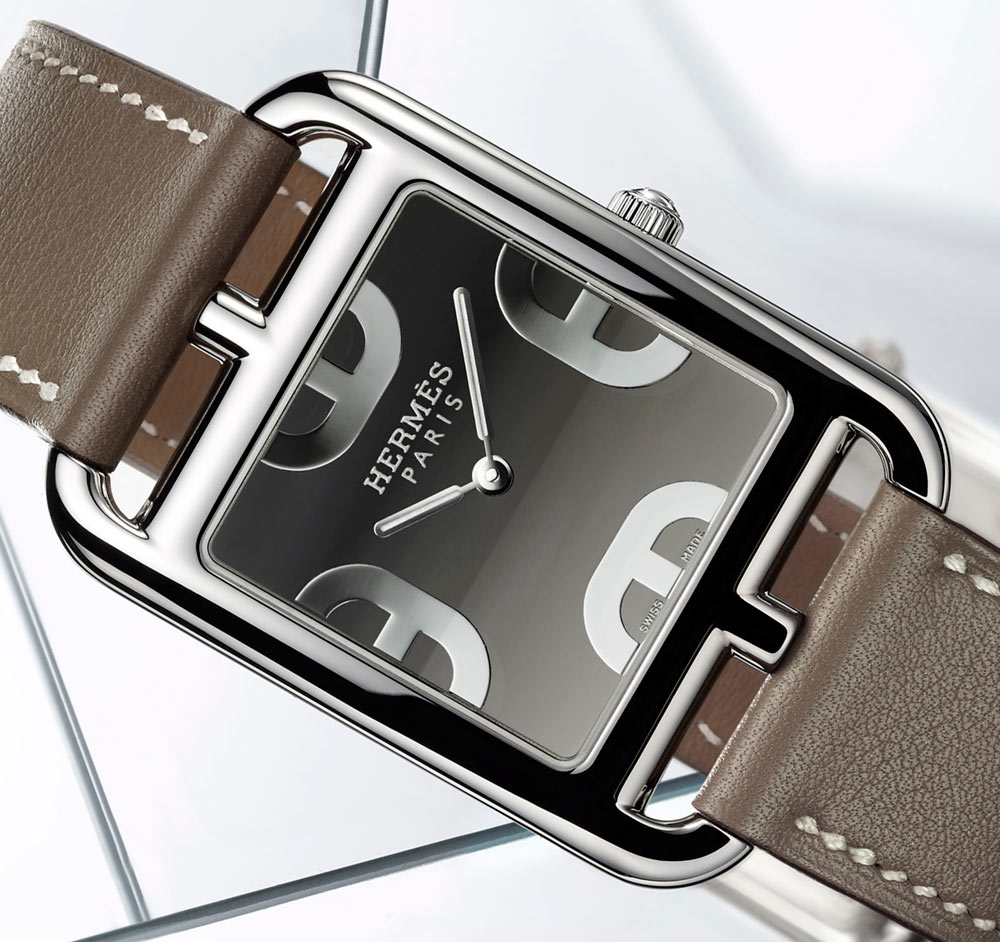 The Cape Cod was designed by Hermès’ long-time artistic director Henri d’Origny, who was inspired by the brand’s anchor chain motif, which has been used in the company’s jewelry collections since 1938. The case is essentially a square inside a rectangle, with wide, stylized strap lugs. Henri d’Origny, who has worked at Hermès since 1961, is also the man behind the Arceau (1978) and Clipper (1981) watch collections. The Cape Cod (designed in 1961) celebrated its 25th anniversary in 2016. 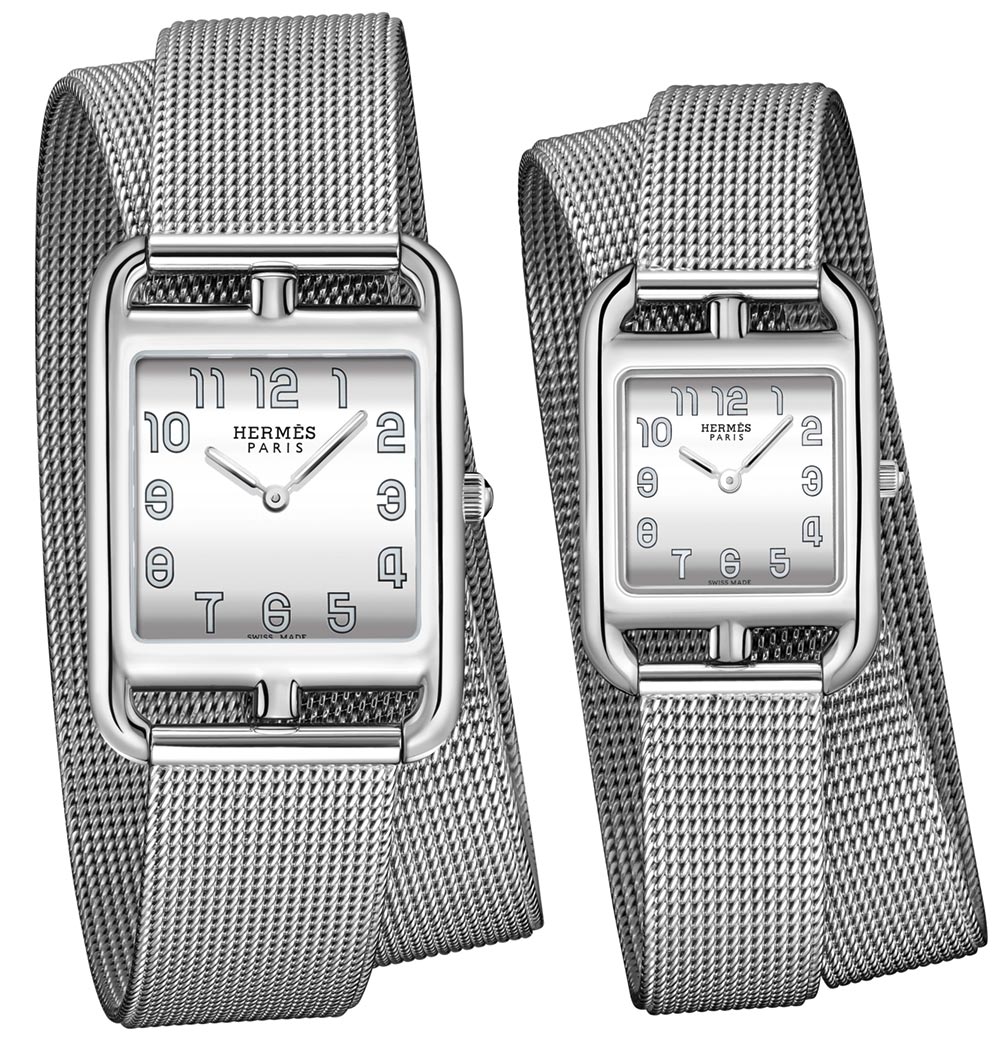 The movements in these new models are all quartz, an emerging trend in ladies’ collections by otherwise high-end brands, as an alternative to larger, more expensive automatic movements. It is likely a sign of what we will see more of next year, as the Swiss watch industry is only beginning to emerge from a recent downturn. The new generation of quartz watches, however, are not low-end pieces. They are made according to higher standards of quality than those made during the quartz era of the 1980s. For example, last year Hermès introduced an 18k gold and diamond Nantucket, an elongated version of the Cape Cod, with a quartz movement. 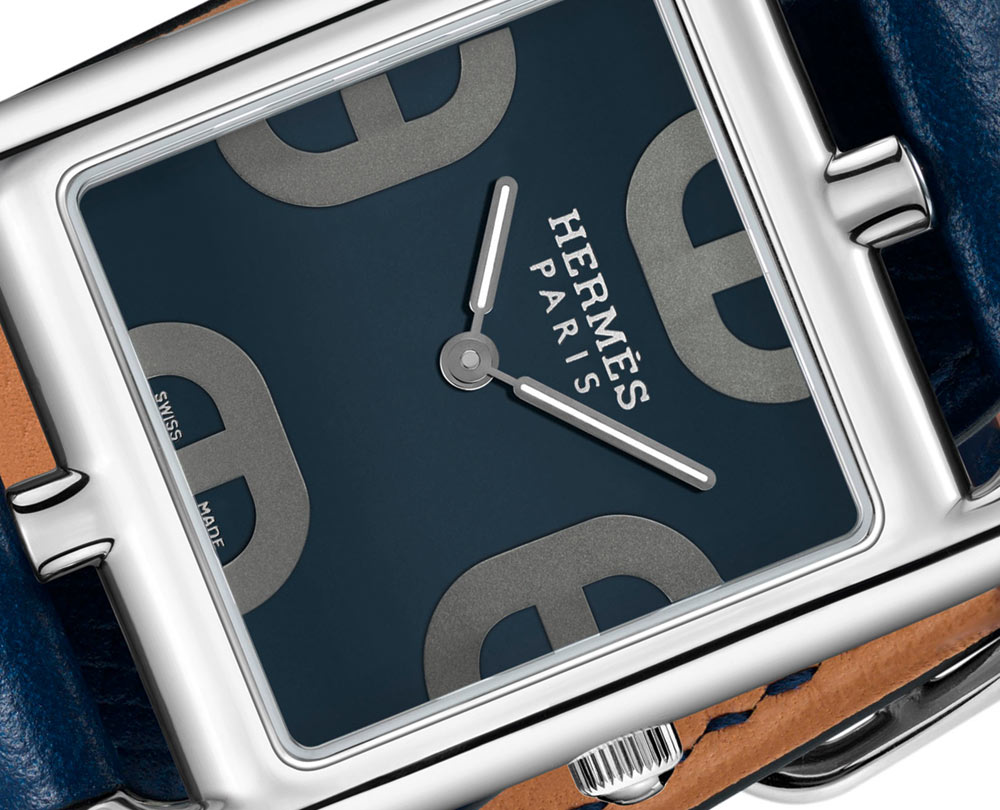 It is also important to note that quartz is not the only option within the Cape Cod collection, and that Hermès is a producer of primarily mechanical watches, with its own calibers. There is a Cape Cod moonphase (introduced in 2007), and an “8 Day” with jump hour, both with Vaucher movements, a boutique movement maker of which Hermès owns a 25% stake. In 2010, Vaucher made a movement for the Cape Cod Tourbillon, and in 2009, introduced the men’s Grandes Heures Cape Cod, using the Caliber H1928 as a base, with a module that drives a system that speeds up or slows down the movement of the hour hand. The theory is to pretend to speed up time during periods of boredom and suspend time during fun things, like lunch. There are also metiers versions of the Cape Cod, with enameled dials, often depicting patterns in Hermès’ famous silk scarves. 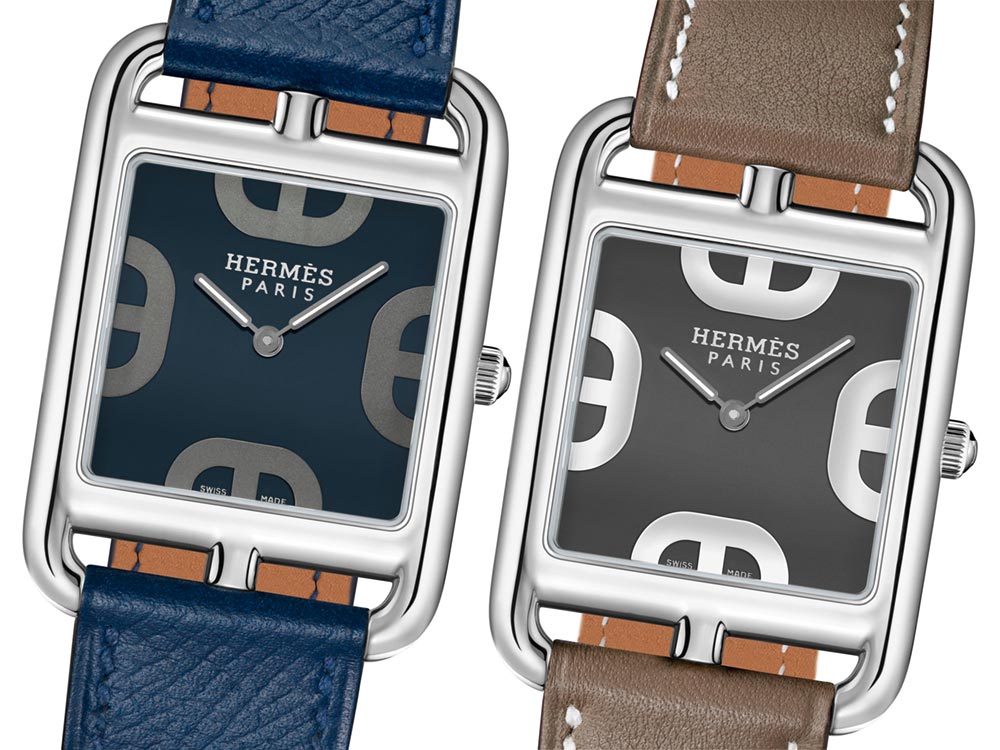