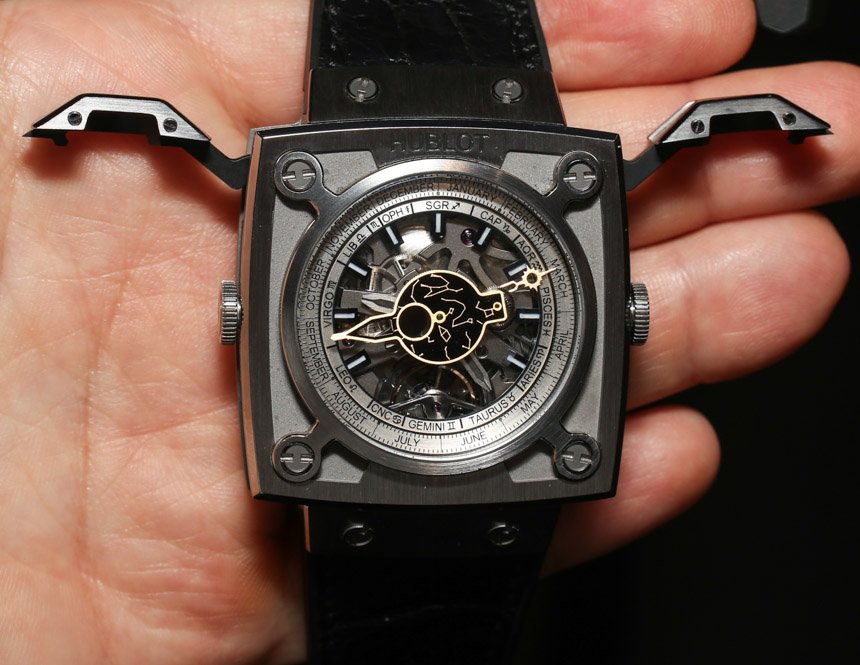 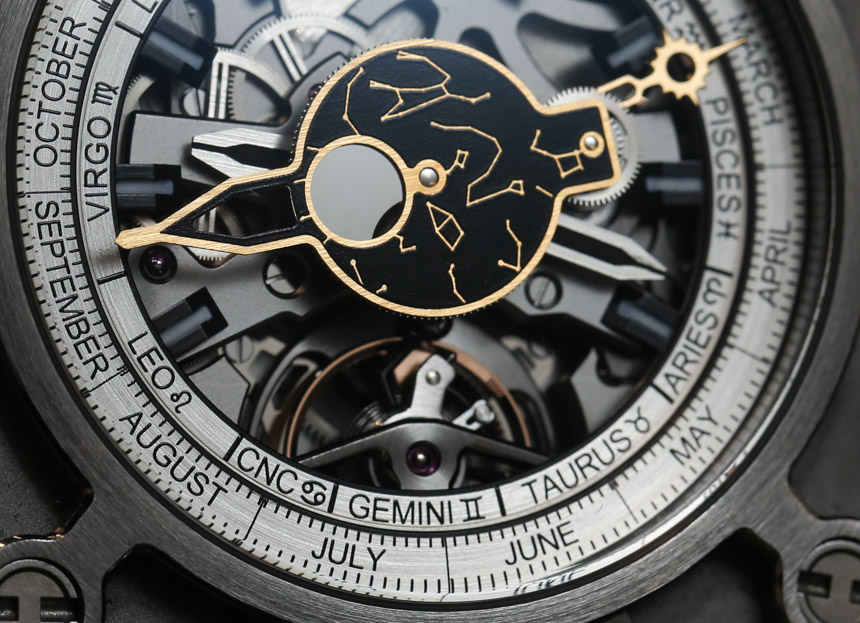 I happen to love watches like this. Take a little inspiration from antiquity, mix in traditional horology and add some modern design. Before you know it, you have some totally interesting and wild timepiece that does not fit into any particular box. This is the 2013 limited edition Hublot Antikythera SunMoon watch. Part calendar watch, part astronomical watch, this is horological obsession at its best.

Do you recall the Hublot Tribute to Antikythera watch? In 2011 Hublot debuted this masterpiece of complexity as a tribute to the 2,000 year old (yes, two thousand) Greek Antikythera mechanical device that was found underwater off the coast of Greece in the early 20th century. The original device was a calendar of sorts and is the oldest known mechanical device to exist. Hublot’s in-house mastermind Mathias Buttet made it a personal project to recreate the mechanism of the Antikythera in the size of a timepiece. He did so and Hublot produced just four of them – never to be officially sold aside from  at one or two special auctions. So now, for 2013, Hublot honors their own Antikythera creation with a simpler (but not simple) version called the Antikythera SunMoon. This one will be sold, but Hublot will only produce 20 of them. 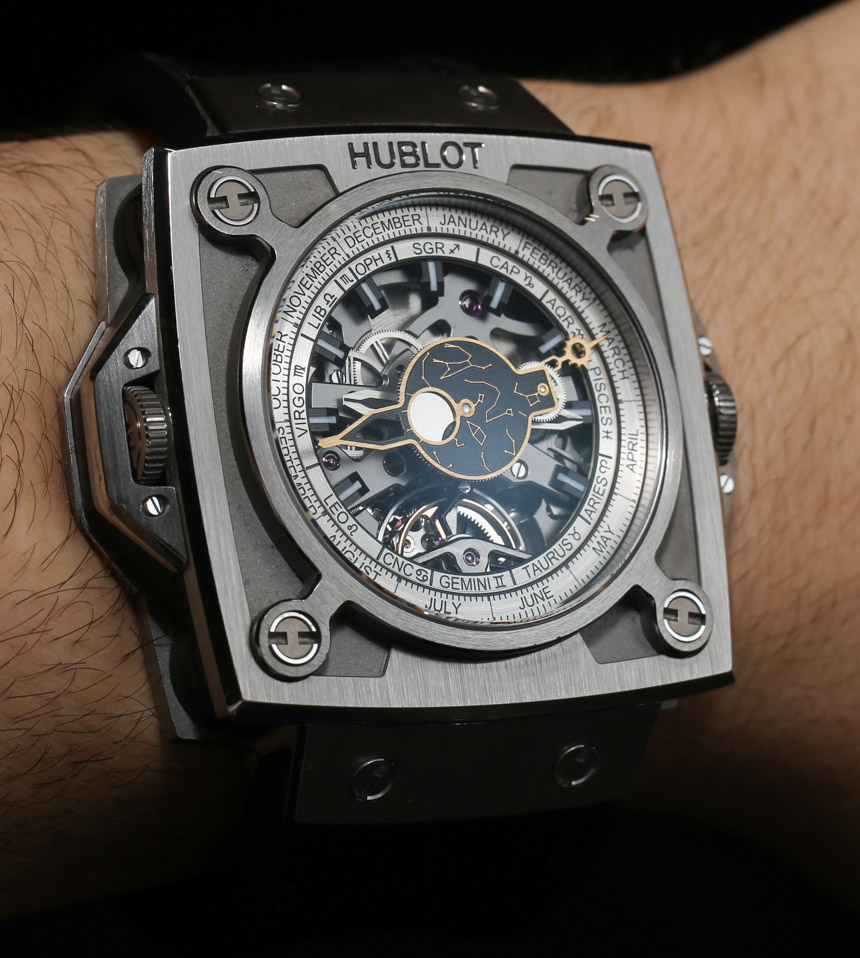 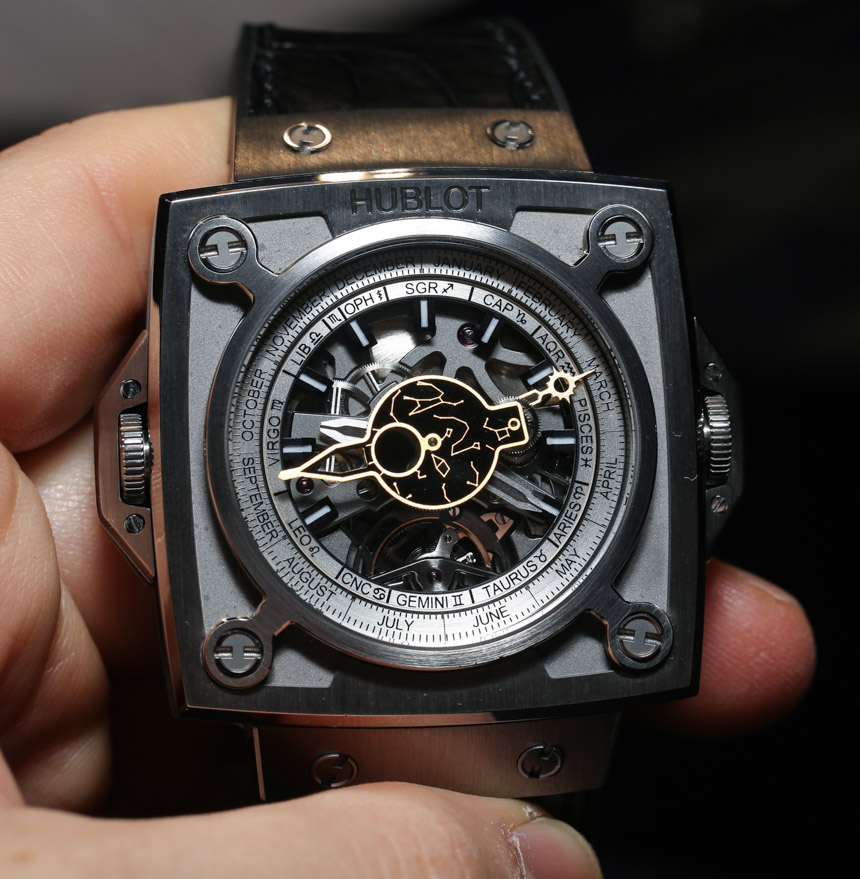 Hublot hasn’t given us the size of the case, but as you can see this isn’t a small watch. Nor is it unwearable either. The cushion-shaped case is very interesting, and a new design in what is still relatively pure Hublot DNA. The case detailing is really interesting, and does offer the illusion of looking into the portal of a machine. The case is produced from titanium, and you can see the iconic Hublot “H” screws used in the corners of the case. Further, the Antikythera SunMoon is also known as the Hublot MP-08, as it is part of their “Masterpiece” watch collection.

One of the most interesting elements of the design is that the Antikythera has two crowns. And from a design perspective you can see how the crown guards lift up like wings to allow you to operate them. This watch literally wants to be Batman. Or maybe they are ears? The movement is actually pretty simple to use. Basically one crown is used for setting the time and winding the manually wound movement, and the other crown is exclusively used to adjust the calendar settings. The movement is entirely in-house made and known as the Hublot caliber HUB9008. Before I forget, the movement does have a tourbillon. Yup, you didn’t think Hublot would leave out a tourbillon did you? It is always a good time for a tourbillon. You knew that right? Elements of the movement are seen through the skeletonized dial. 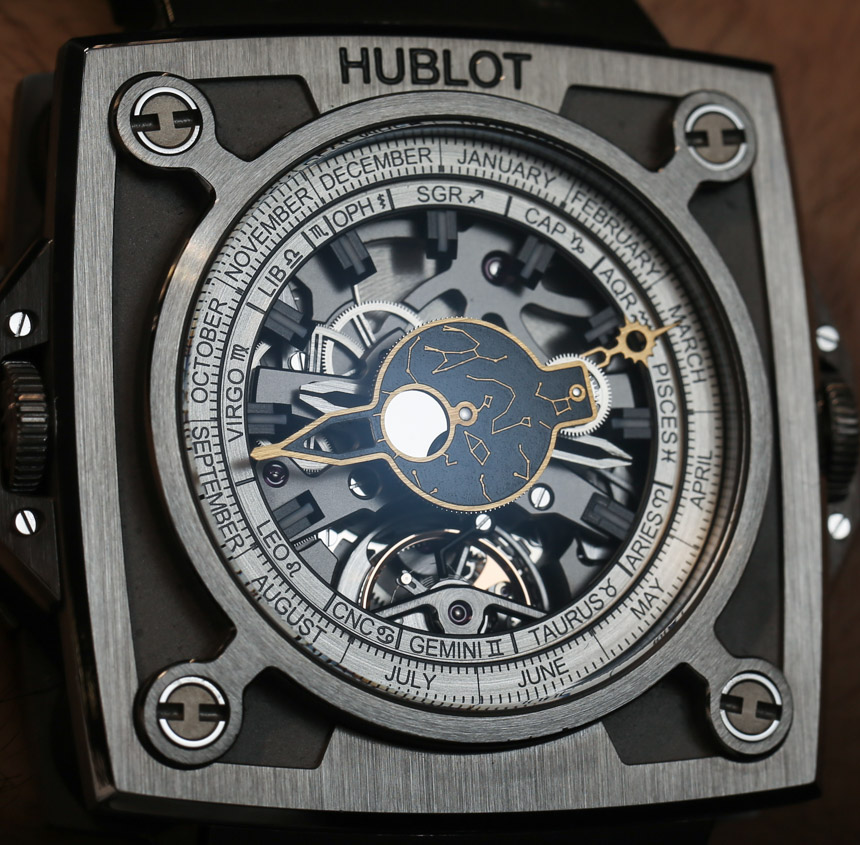