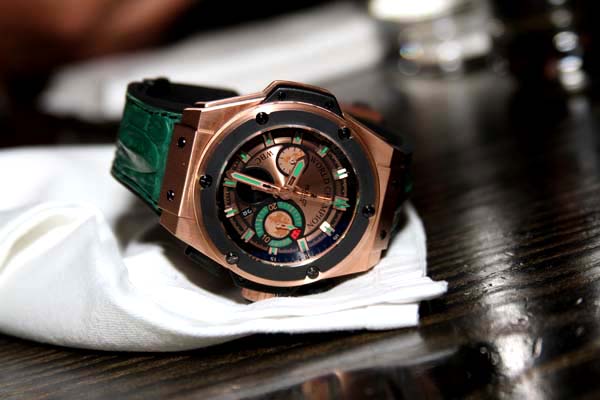 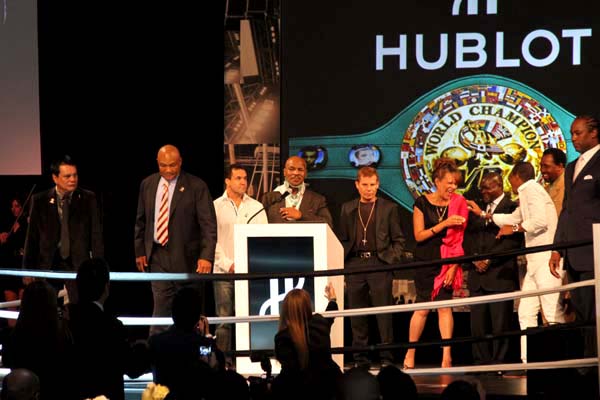 I was with Hublot in Las Vegas for a very atypical watch event. A merging of two extremely different worlds coming together for fun, publicity, and the pursuit of mutual goals. The rowdy and often dramatic world of professional boxing has little in common with the clean lines and sober attitudes you’ll find in the luxury world. The heroes of watch making are executives, designers, creative minds, and marketers. They celebrate men and women of greatness from afar, and from a public perspective the luxury and watch business has a clean and stately face.

Boxing is about fighting and the clashing of personalities to evoke excitement over the next big event. It is a hard and fast life for the stars, who often fade once the glory has worn off. Only a handful move on to make something of themselves in alternative businesses once they retire from boxing. Like the champions of many sports, life after competition is usually not very interesting. Especially those who haven’t handled their finances properly and who have suffered injuries. In boxing, this is all too common. Why do I mention all this? Because interesting enough this issue is what Hublot and the World Boxing Council teamed up to help address. 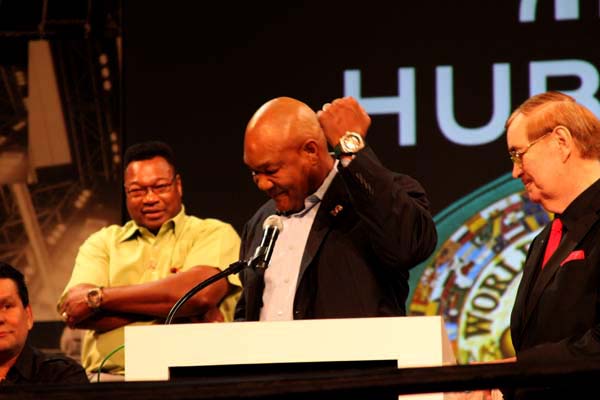 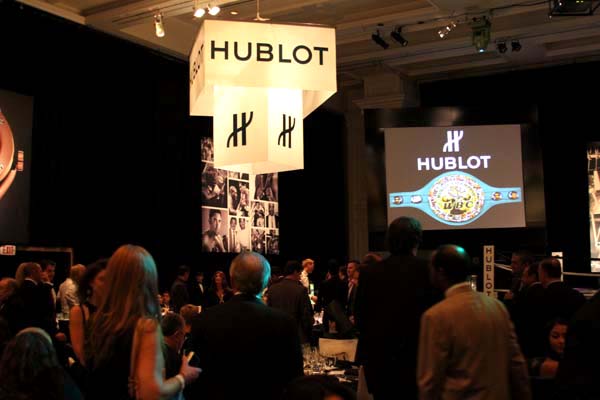 Hublot’s marketing rubric is simple, but highly effective. 1) Connect with something that has mainstream appeal. 2) Offer something interesting like a watch or charitable contribution in collaboration with that thing, person, or event. 3) Publicize and create excitement. For years I have seen the successful outcome of this system, especially as advanced by Hublot’s chief voice Jean-Claude Biver. Connecting with boxing seemed a bit special though, with the players in the industry demanding something unique.

The result of working with the World Boxing Council (“WBC” – just one of the major entities associated with boxing) was the production of 24 watches and a charity auction gala to raise money for boxers. Not just any boxers, but retired champion boxers who for whatever reason either financially or physically cannot not take care of themselves. They call it a pension fund, and in a sense that is what it is.

It is quite possible that one or more of the men there to represent legendary boxers might someday be recipients of this pension’s funds. There before us was a dozen or so famed men whose names I grew up hearing. I was never really that much into watching boxing, but who didn’t know names like Mike Tyson, George Foreman, or Julio Cesar Chavez. My first memory of Tyson was seeing his name on Nintendo’s Punch Out video game, and Foreman became toward the end of his career with his grill. It paid to be a foodie for him. 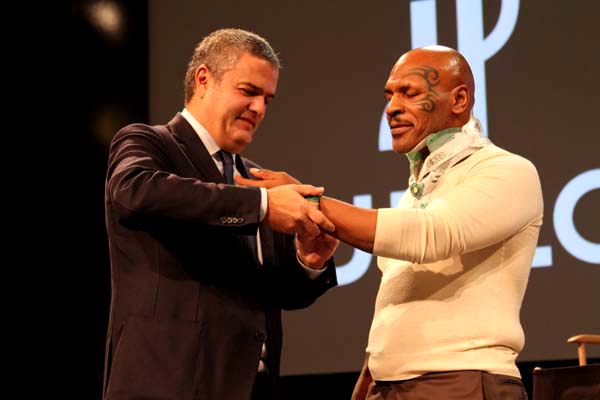 For other guys life isn’t so great after they retire. Repeated blows to the head can often result in early onset mental problems which can result in problems for those guys who don’t have a lot of money saved up – and athletes don’t exactly have a wonderful reputation with handling their money. So to raise money for this WBC pension fund Hublot made some watches to auction off. Each of the 12 legendary boxers got an Hublot watch with their name on it. A duplicate was made for auction purposes. At the Bellagio Hotel in Las Vegas the auction for each of the 12 watches raised just shy of one million dollars. Hublot contributed the last little bit to make it an even $1,000,000 raised. Each of the 12 watches went from about $60,000 – $150,000 each. They were specially made 18k gold red gold and green versions of the King Power Chronograph. I have to admit, they looked pretty good.

A major spectacle of the days was the presentation of each watch by Hublot CEO Ricardo Guadalupe to each of the boxers. He personally placed the watches on their wrist. You could tell how excited each of them was. They happily modeled the watches for photographers and for the audience. It was like giving a bunch of kids new toys. I don’t think that most of them understood the brand. I tried to watch carefully to see which ones might be watch lovers. The level of sophistication among the group varied widely – as indicated by how they spoke and how they dressed. Some seemed to be stuck in the past – haircuts and all. I did have a good feeling about George Foreman being a watch guy though. I spend a few moment speaking to him and low and behold he did have a lot to say about watches and confirmed being a collector for a while. He was a really impressive guy and it was fun to meet him. I didn’t even think to make a grill comment. 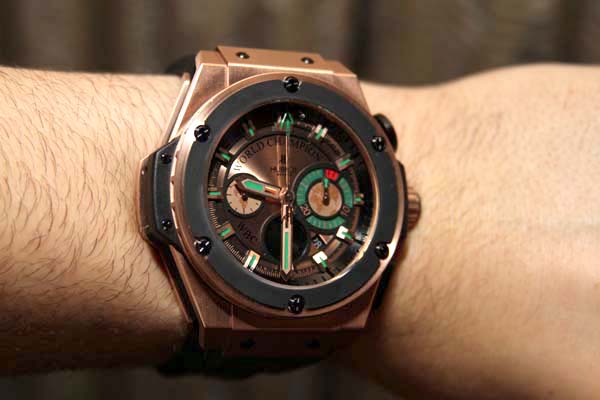 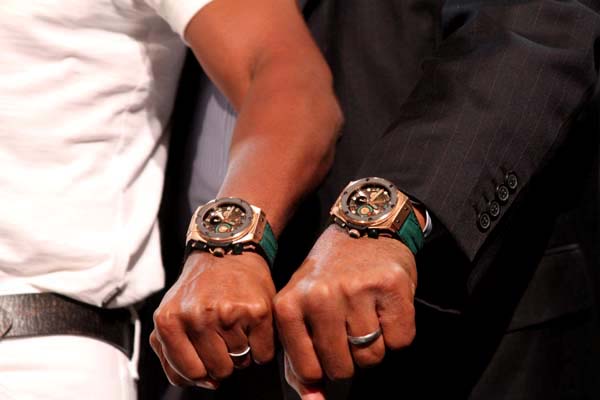 These piece unique watches would never be available for retail sale anywhere. The people bidding for the timepieces would get truly unique timepieces with one duplicate out there in the possession of the man whose name and face was on the back of it. A fun detail on the dial was the term “World Champion.” Now who doesn’t want that printed on their watch? It is tantamount to those “I’m Number One” hats. I got to wear one of the special King Power Boxing watches for a while to appreciate the full ego-stroking effect of the design.

Hublot was a guest of the boxers and the boxing community. You could tell that the Swiss brand was momentarily invited into the complex and personality driven world of professional boxing – whose characters are sometimes as controversial as they are charismatic. I think it was a unique experience for Hublot to be a part of it, and I’d be curious to hear some of their internal stories. It felt good though, like the two industries could learn from one another. In the end both are about spectacle and showmanship with an intense amount of science and precision in the background. 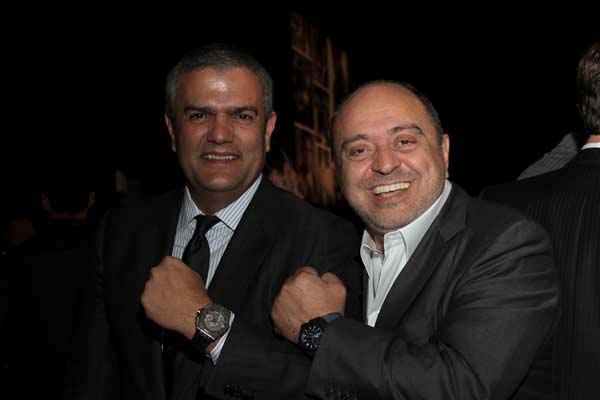 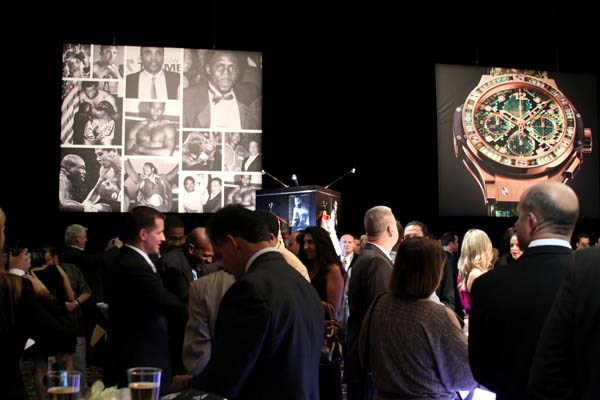 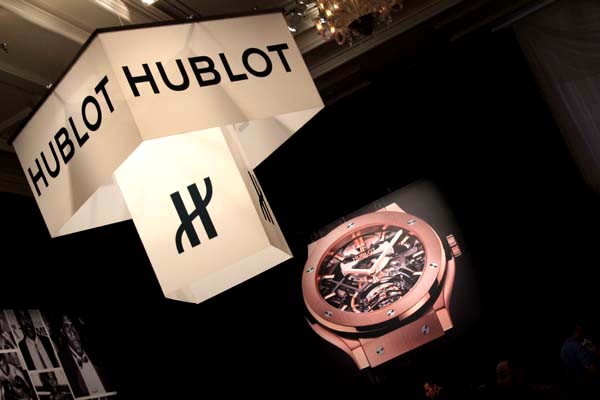 It is unclear whether or not the WBC and Hublot relationship will result in products that are available for any type of retail consumption in the future. Even if there aren’t going to be future boxing watches, Hublot succeed in getting a diverse lot of media to attend the event. I met a lot of interesting journalists who no doubt would start their reports by explaining what Hublot is and that they sell luxury watches. Something which I still realize is not an obvious industry to many people. You still get a lot of shocked faces when you explain that a company makes timepieces which average $30,000 a pop.

Boxing and pugilistic arts are among the oldest form of sports we are aware of. We are continually fascinated with them as they are competition in their purest form between two able-bodies people no affiliated with a team or place. Among the legendary champions at the Hublot charity auction for the WBC was Mike Tyson, Sugar Ray Leonard, Lennox Lewis, Jeff Fenech, Larry Holmes, Ken Norton, Tommy Hearns, Roberto Duran, Azumah Nelson, Julio Cesar Chavez, Oscar De La Hoya and George Foreman. Good people that I was lucky to see all represented at one event with Hublot. The tone of the day was summed up best by George Foreman who stated the pension fund’s goals proved that boxing supporters not only love boxing, but that boxing also loves boxers.