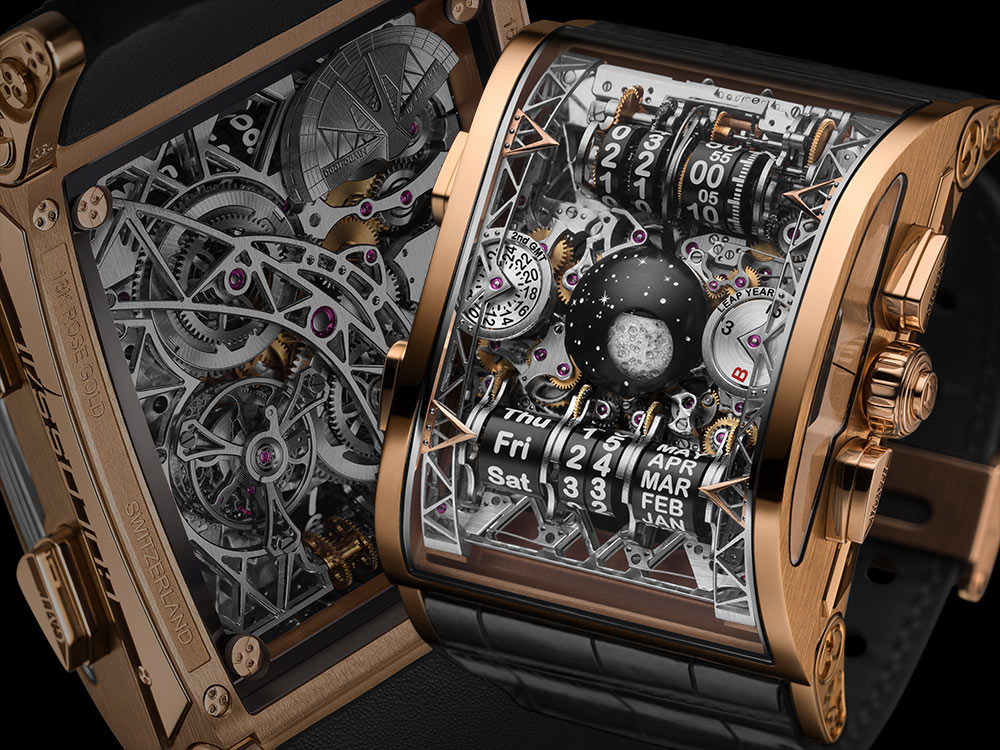 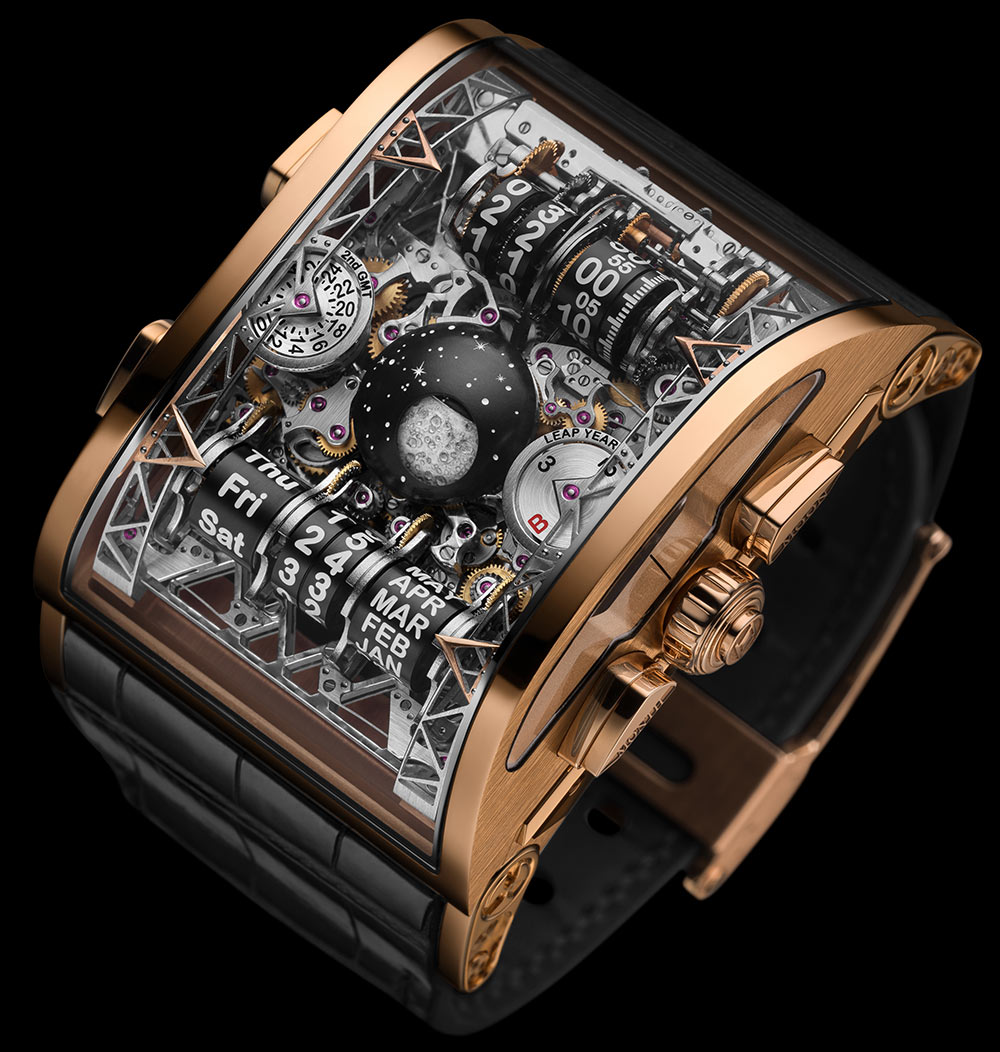 2017 is a momentous year for Hysek. It not only marks the 20th anniversary of the brand, but it is also the 10th anniversary of Hysek’s manufacture status. In 2007, as Hysek became a full-fledged manufacture, it introduced a stunning watch called the Grand Complication Colosso that came in an unusual case, called the Colosso case, and featured a number of complications such as a minute repeater, a spinning globe doubling as a GMT indicator, a big date display, and more. Now, Hysek is introducing its spiritual successor called the Colossal Grande Complication watch. Like its predecessor, the Hysek Colossal Grande Complication comes in an imposing case and features a number of interesting and technical innovations. 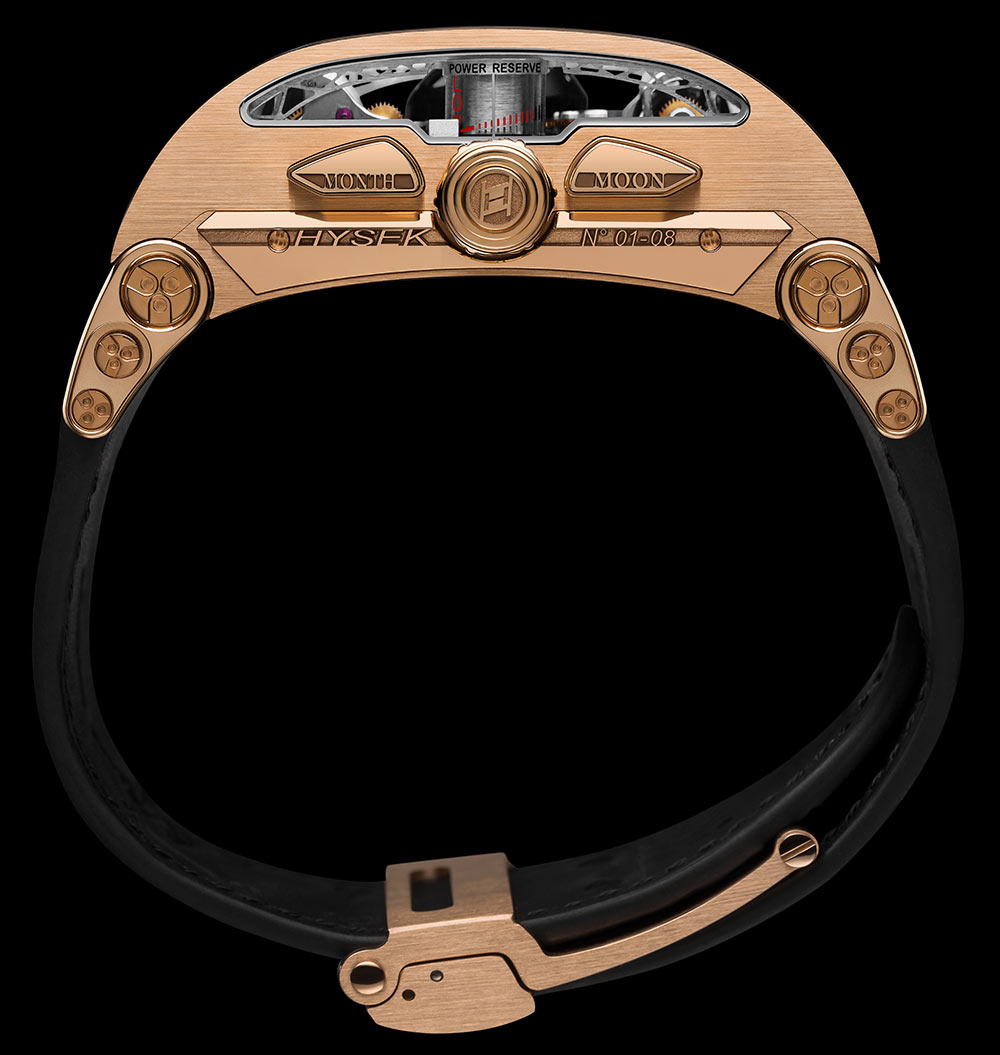 The Colossal Grande Complication comes in Hysek’s distinctive Colosso case. Only available in 18k rose gold, the Hysek Colossal Grande Complication measures 44mm wide, 57mm lug to lug, and is 18mm thick, living up to its name as a big watch. It has an expansive curved sapphire crystal that arches along with the case, and two smaller sapphire crystal windows on its sides. This means that the highly skeletonized dial and movement are clearly visible to its lucky wearers. Water resistance is rated at just 30 meters, so be sure to keep it clear of liquids. 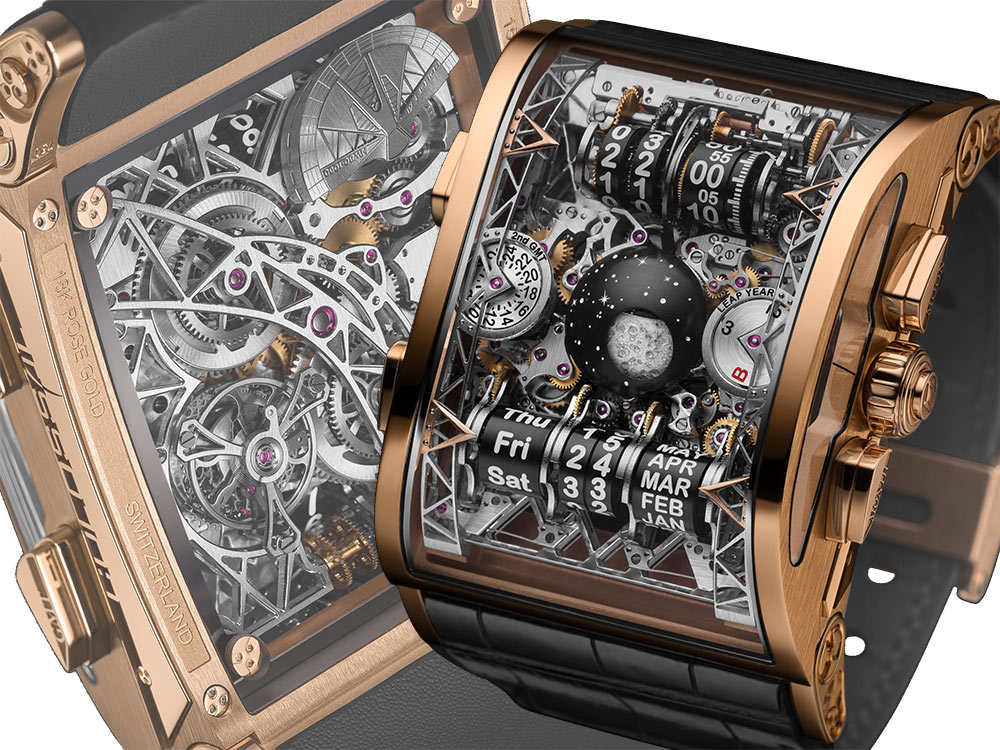 If you didn’t already notice from the pictures, there is a lot going on the watch’s dial. Let’s begin at 12 o’clock, which is the digital display of the time in hours and minutes using rollers. We have seen similar implementations on other watches before, such as the Hublot MP-05 LaFerrari watch, but the Hysek Colossal Grande Complication is a little different. 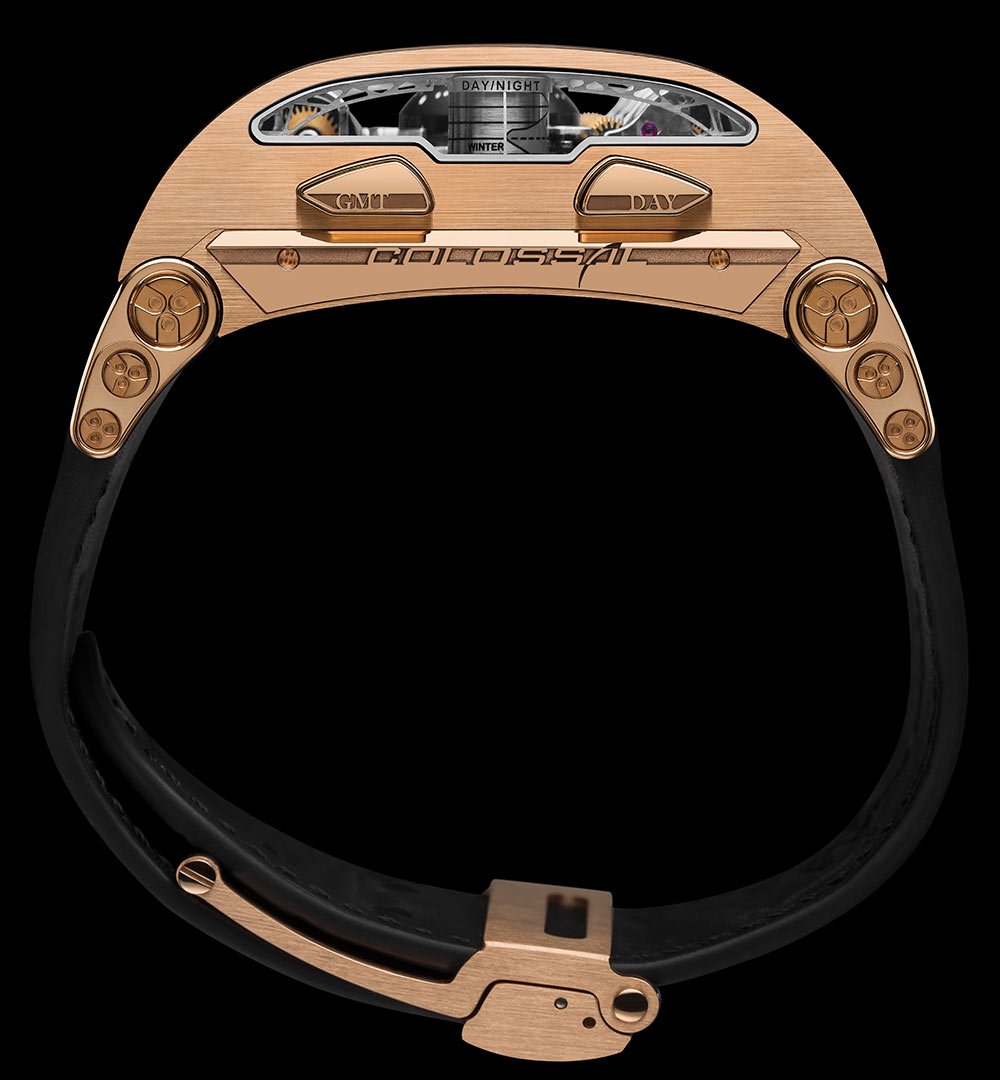 Most watches of this kind display the time in 12-hour format. The reason being that once the time goes past 11:59pm, the watch will begin to show 12:00am, which is correct. The Hysek Colossal Grande Complication, on the other hand, shows the time in a 24-hour format, and therein lies the problem. After 23:59, the watch should show 00:00 hours, but if the rollers continue on their natural course then the watch would show 24:00 hours, which is wrong. To overcome this, Hysek developed what it calls a retrograde roller linear display system where the roller discreetly moves backward from the “3” position to a “9” position so that when midnight arrives, it will show a “0.” 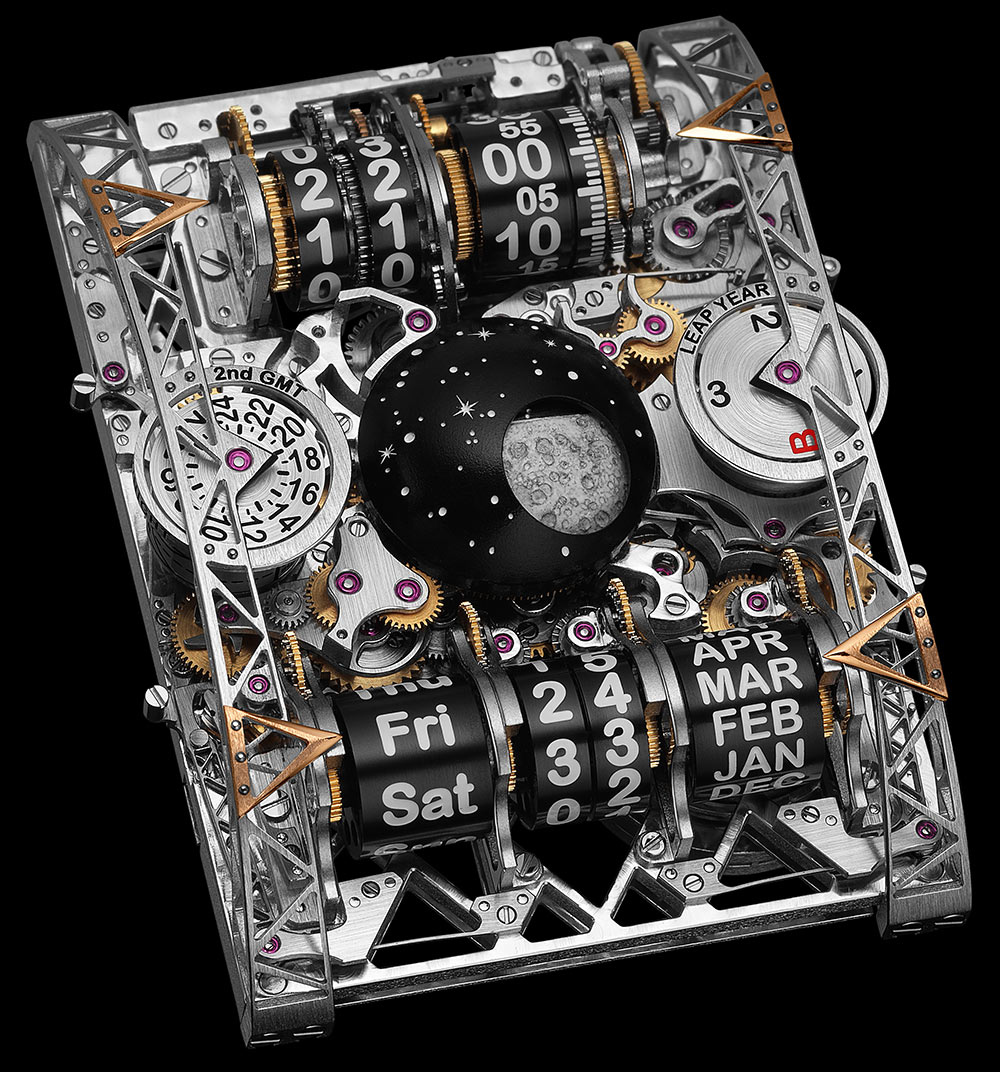 Obviously, if Hysek opted for the more typical 12-hour format, none of this would necessary. But that wouldn’t be haute horology, would it? Part of what makes high-end horology fun is finding solutions to existing problems and Hysek has certainly accomplished this with its new Colossal Grande Complication. 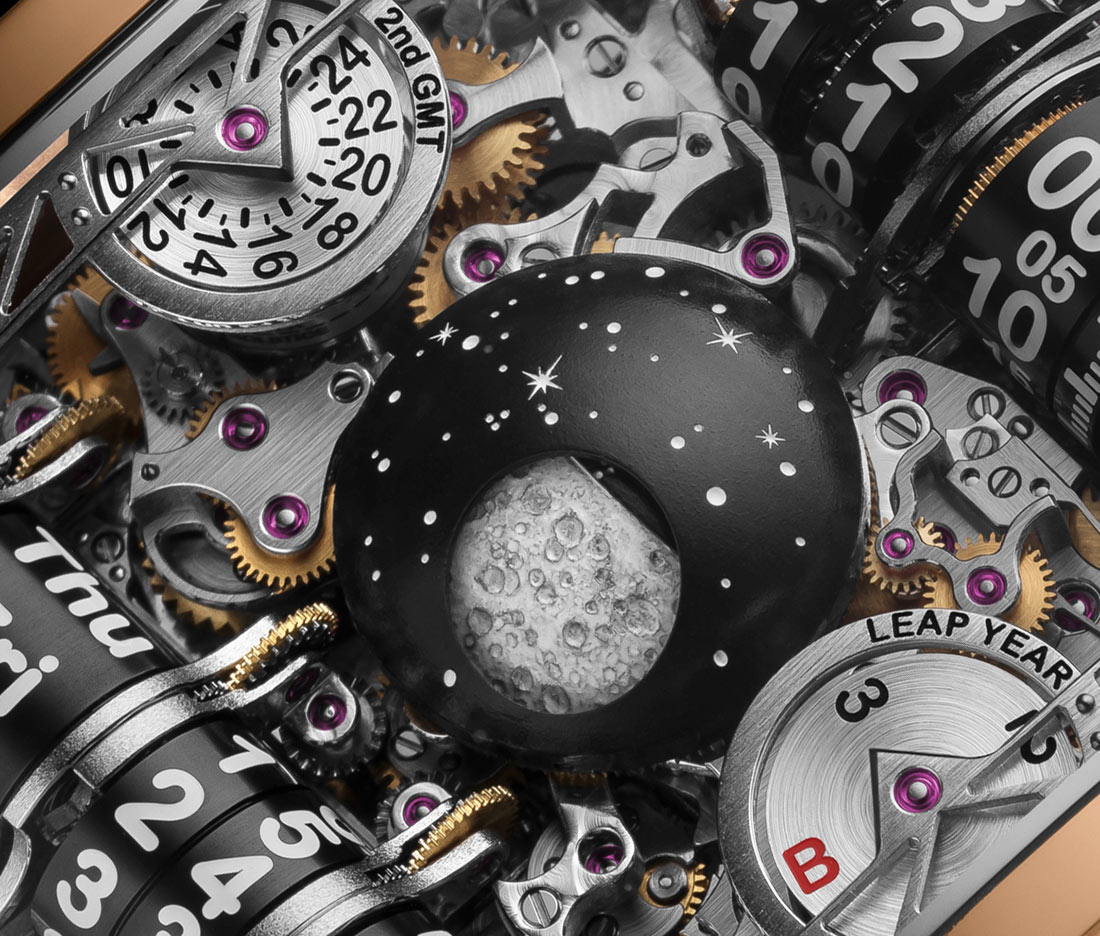 Moving down, there’s a large three-dimensional moon that also serves as the moon phase indicator. Flanking the moon phase indicator to the left is a dual-timezone indicator, and to the right is the leap year indicator for the linear perpetual calendar below at 6 o’clock. Like the time, the date is displayed digitally using jumping rollers, which therefore makes it very easy to read. And finally, there’s a power reserve indicator that can be read off the smaller sapphire window on the right side of the case. 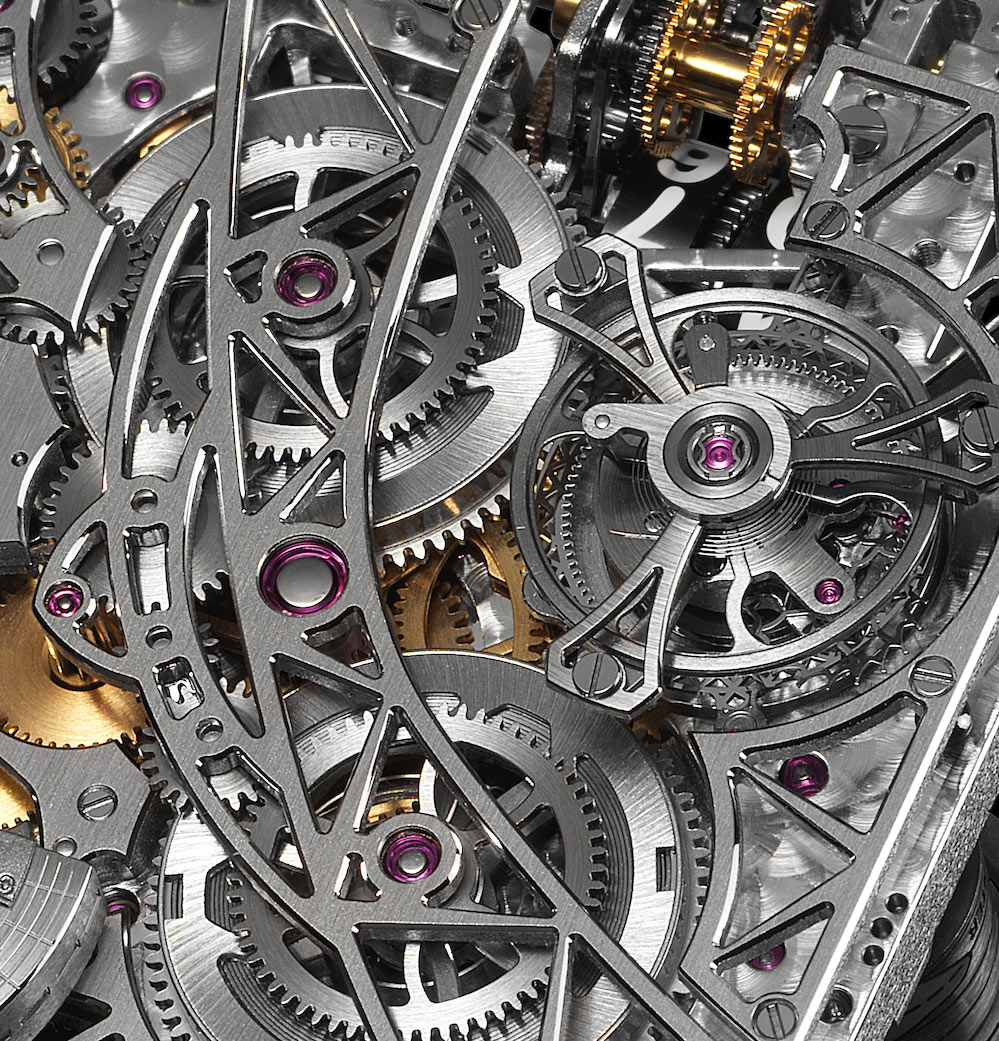 There is more to look at around back. Behind, through the sapphire display case back, there’s a micro-rotor at around 1 o’clock made out of platinum for better winding efficiency. One can see the twin barrels, which deliver around 45 hours of power reserve. And at around 8 o’clock, there’s even a flying tourbillon. 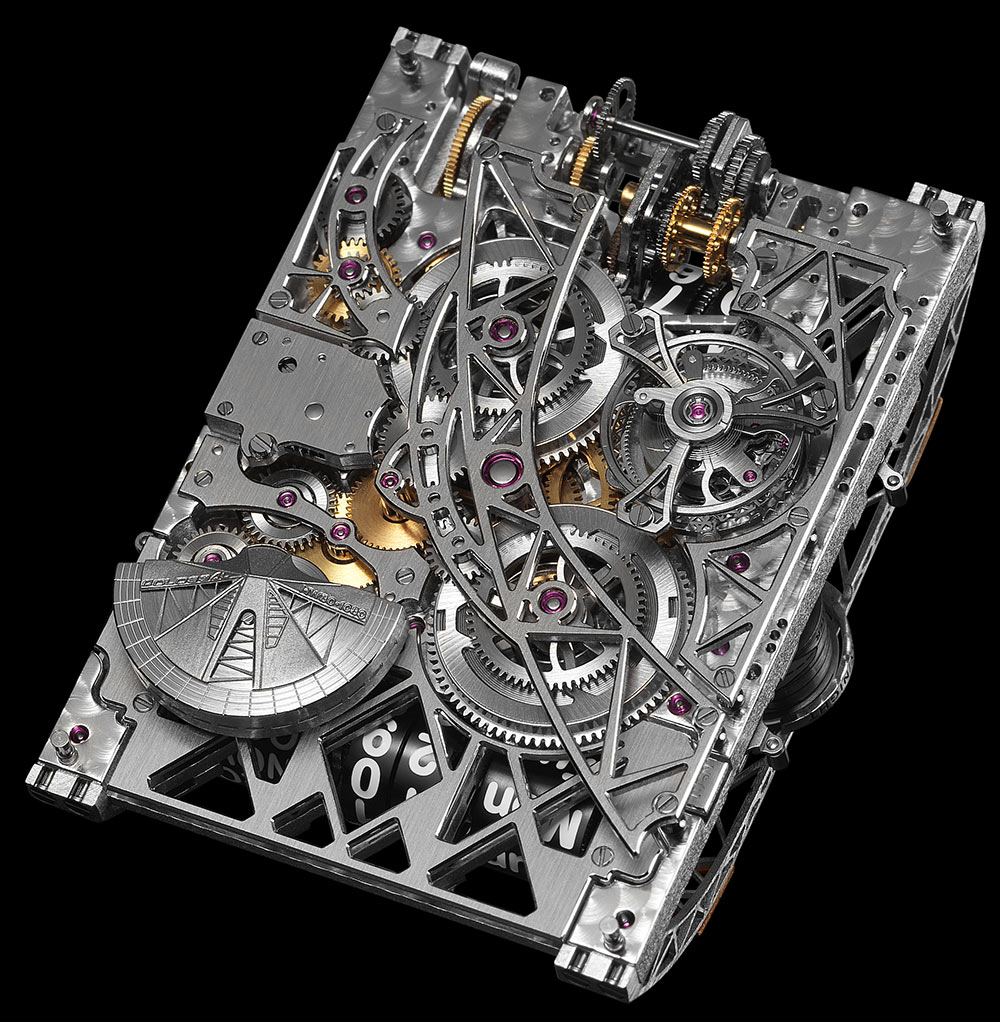 The movement is dubbed the HW80 caliber and it took Hysek over three years to develop. Assembly takes 240 hours because the movement consists of 1080 components, a whopping 186 jewels, 61 bridges, and 7 ceramic ball bearings. The tourbillon beats at a fast rate of 4Hz and it has a balance wheel made out of titanium and a balance spring made out of a special alloy called PE4000.

As a statement piece, the Hysek Colossal Grande Complication has few equals. Its design might not be to everyone’s taste, but it is hard to deny that at least it is eye-catching and audacious. It also boasts an interesting movement that has some really neat complications, such as the 24-hour-format linear time indicator and the power reserve indicator on its side. And I guess you can also say that the addition of a perpetual calendar also makes it very functional. The Hysek Colossal Grande Complication is limited to just 8 pieces and although the price hasn’t been finalized yet, Hysek has told us that it would be “under $700,000.” hysek.com