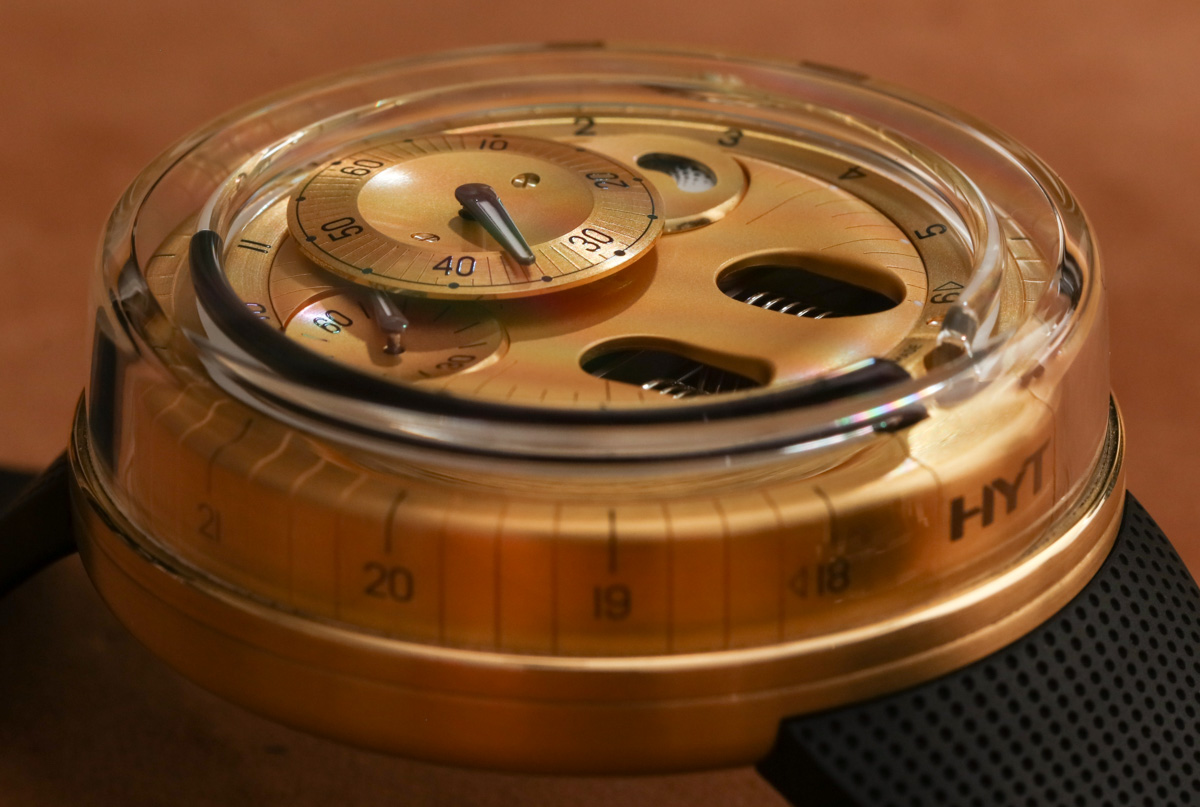 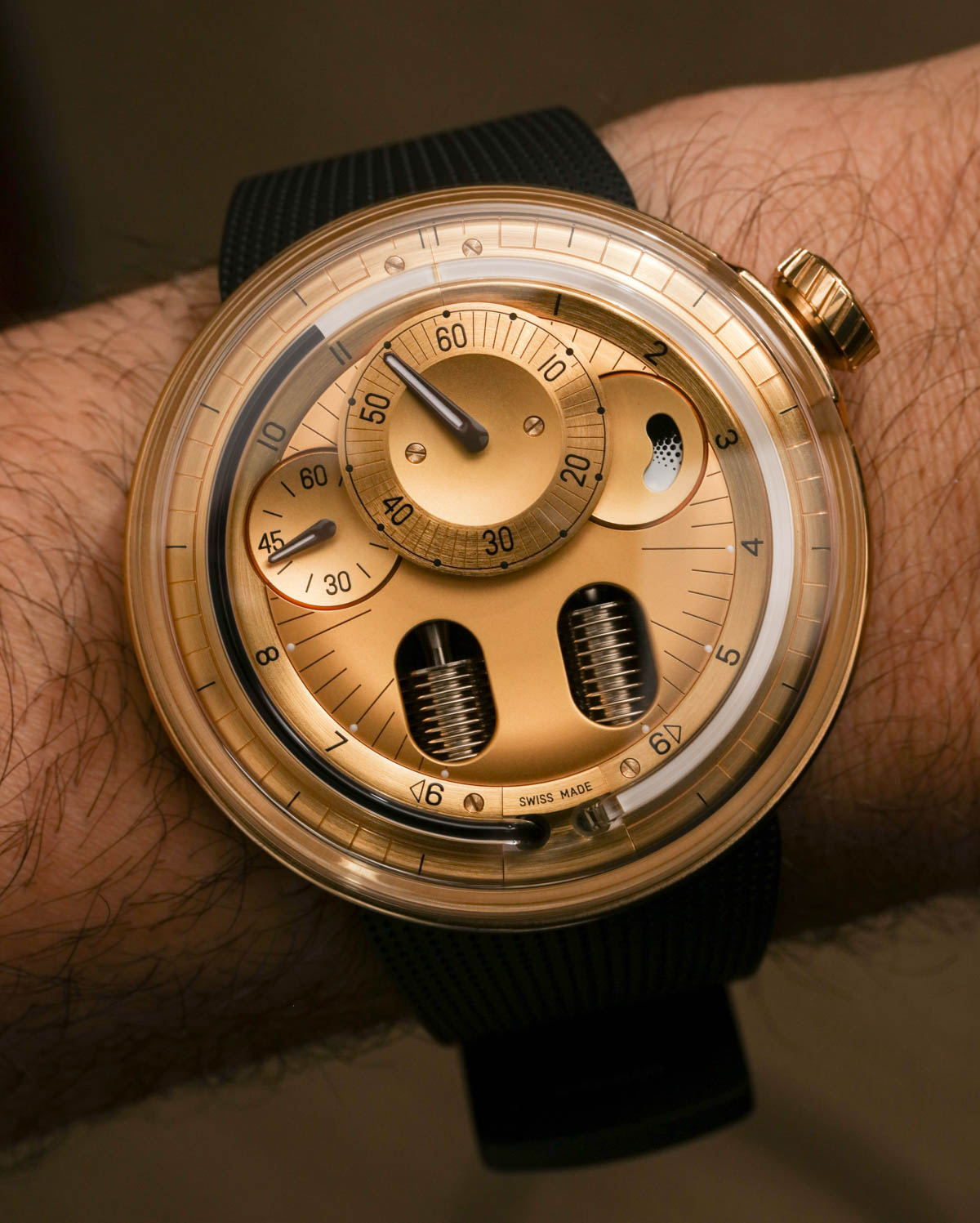 This is the ritziest version of the HYT H0 yet, being in 18k 2N “pale” gold. One of the biggest problems with gold these days is that there are too many ways to fake it. The ability to color other metals and materials so that they look like gold has in many ways diminished the value of real gold. I even attribute the popularity of metals such as bronze with their ability to look like gold (at least from afar). So many things want to be gold, that it can be challenging to know what actually is and isn’t gold. I say all this because even though the case and dial of this version of the HYT H0 are in solid gold, you might not know it just by seeing it.

Hence the concern of making a non-traditional watch out of a traditional luxury material. The HYT H0 continues to look mod-spacey with something that looks like a miniaturized gadget from the Jetsons universe. Not that there is anything wrong with that, but haute luxury is far more trend-based than it is open-minded to novel artistic notions. It takes both education and rebelliousness to understand the appeal of a roughly $40,000 wearable wrist bowl with small bellows that push opposing liquids designed to tell the time. It is an even more niche notion to add about $15,000 to the titanium model and opt for it in gold. 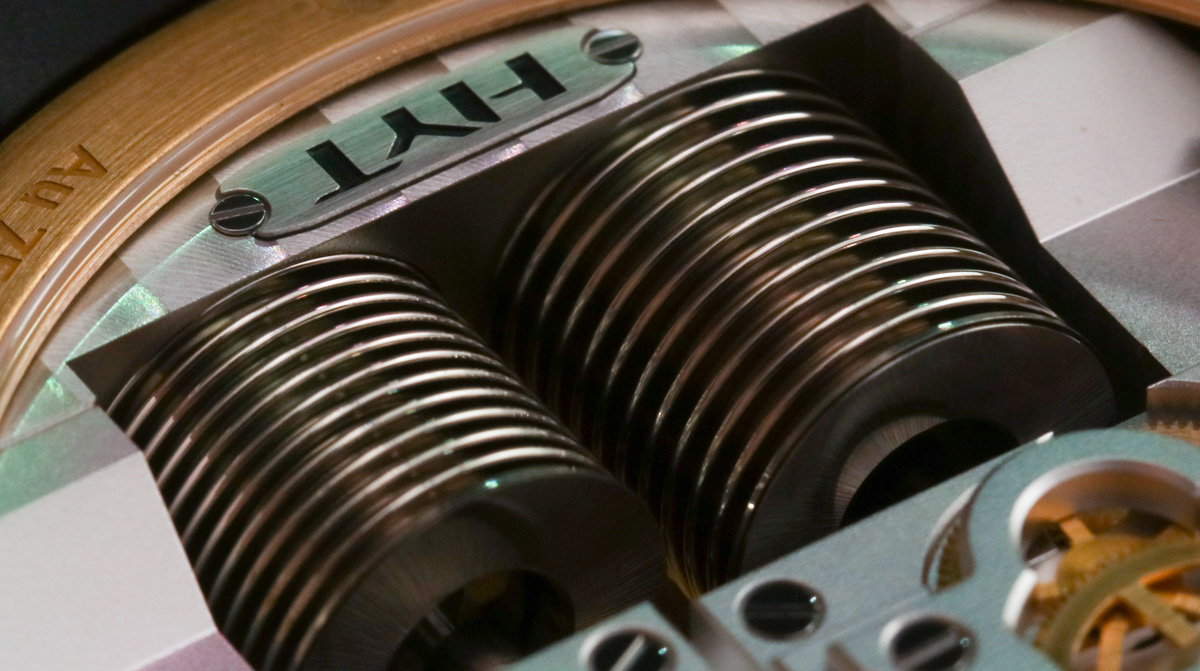 All hands-on images by Ariel Adams. 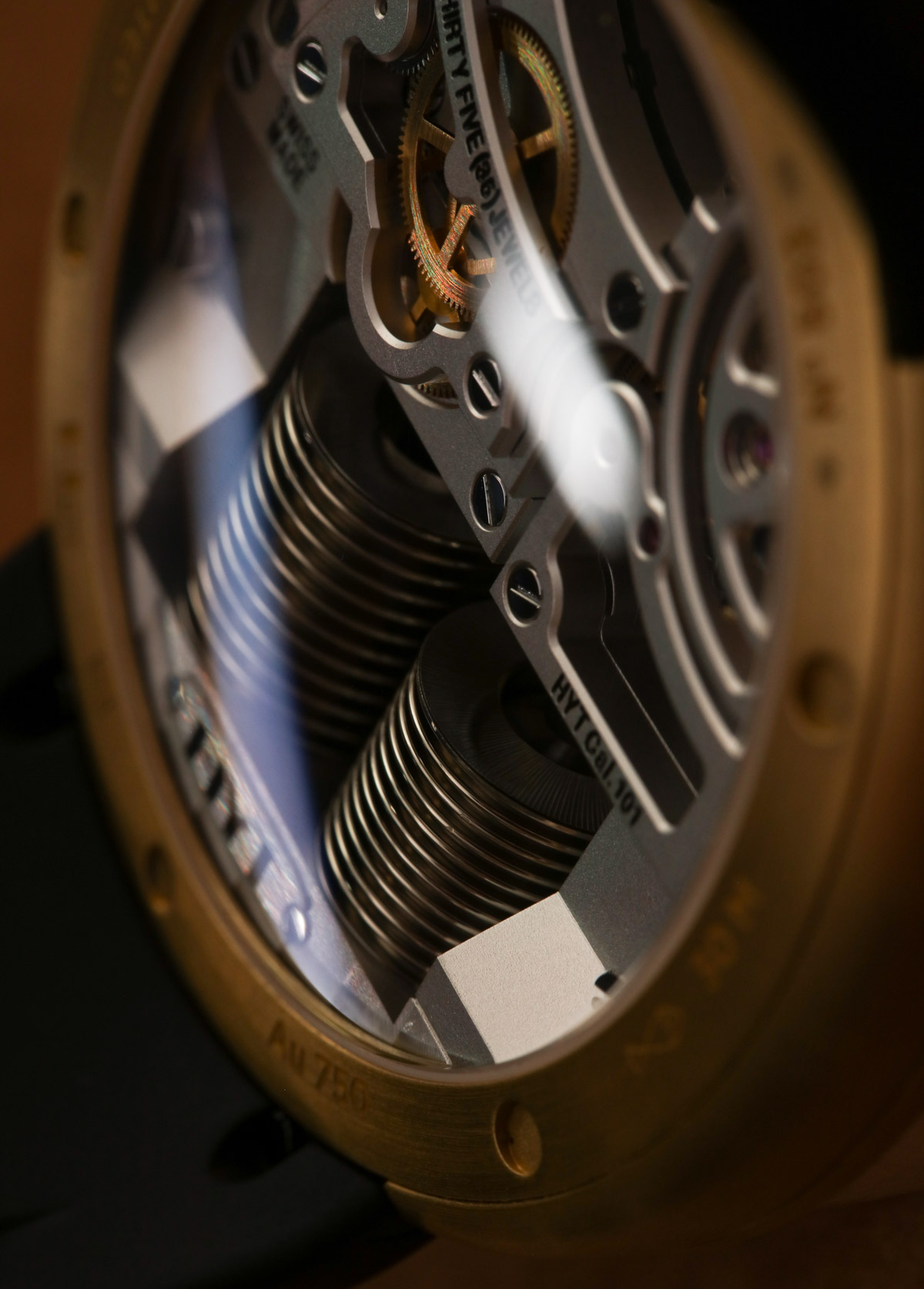 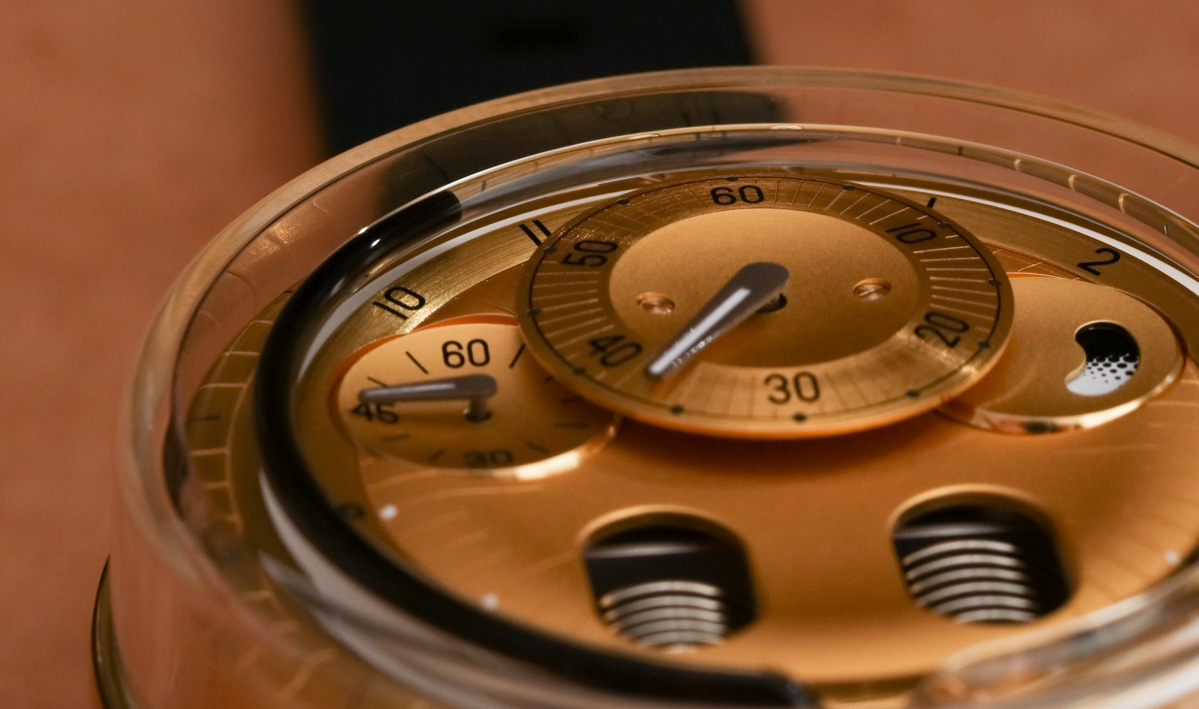 Not just any gold but “champagne” gold as classy marketers like to refer to 18k 2N “pale” gold, which sits alongside other alloys of gold such as yellow, rose, and red gold. Pale gold has a distinct charm to it and always tends to look better when offered in a brushed and satinized finish as opposed to a high mirror polish. The the H0’s 48.8mm wide and 18.7mm thick mass in your hand and the question of whether or not this is or isn’t a real gold object, more or less immediately evaporates. This watch might be a “funky-yet-classy” design incarnate meant for open-minded art lovers, but the case material is something even the most conservative investor will understand. Still, just don’t try to argue with said conservative individual that a wristwatch is anything but an “emotional investment,” since art by definition has some risk involved with acquiring it.

I spent a fair amount of time with the HYT HO when it was more recently reviewed here. I praised the then entry-level watch from the quirky Geneva-based brand for being very comfortable, original in its looks, legible, and also very much in line with the brand’s personality. I just didn’t think the name (which can easily be read as “ho”) was entirely fitting with the image I wanted to associate with the timepiece. HYT claims that the name “H zero” is meant to indicate that this design is a sort of “back to the drawing board” re-imagination of the brand’s first watch, the HYT H1 that was originally released with the debut of the brand in 2012. I get it, but I still think they could have come up with a better name. The good news with watches is that wearing them rarely requires you to say or even think about the name. 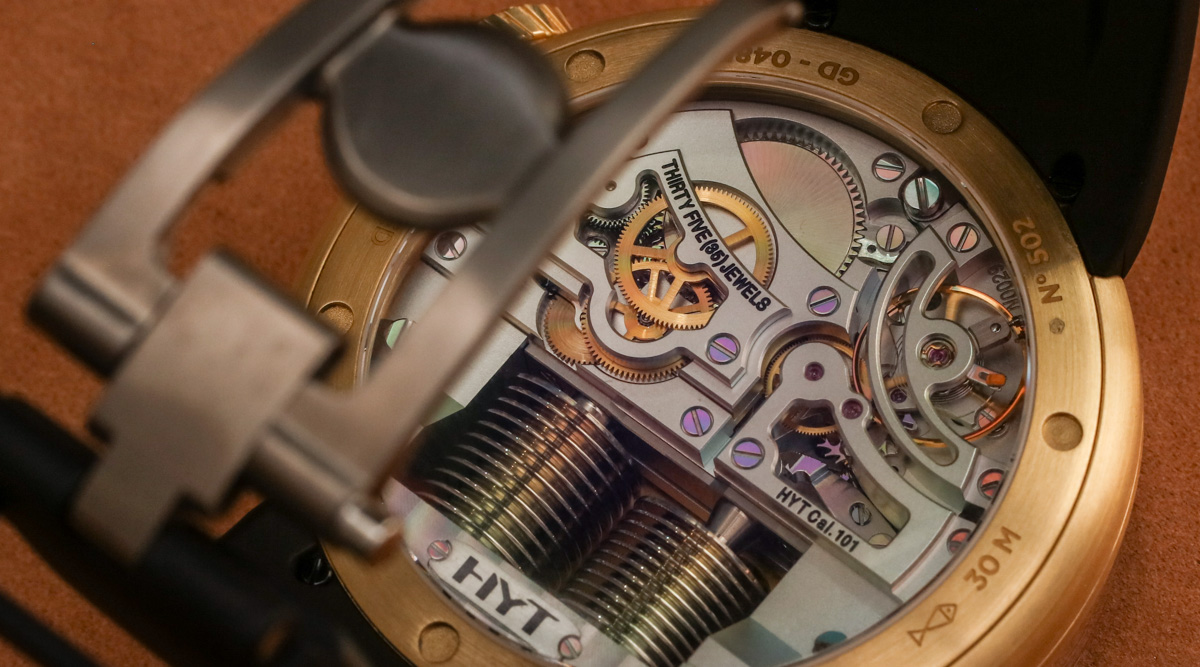 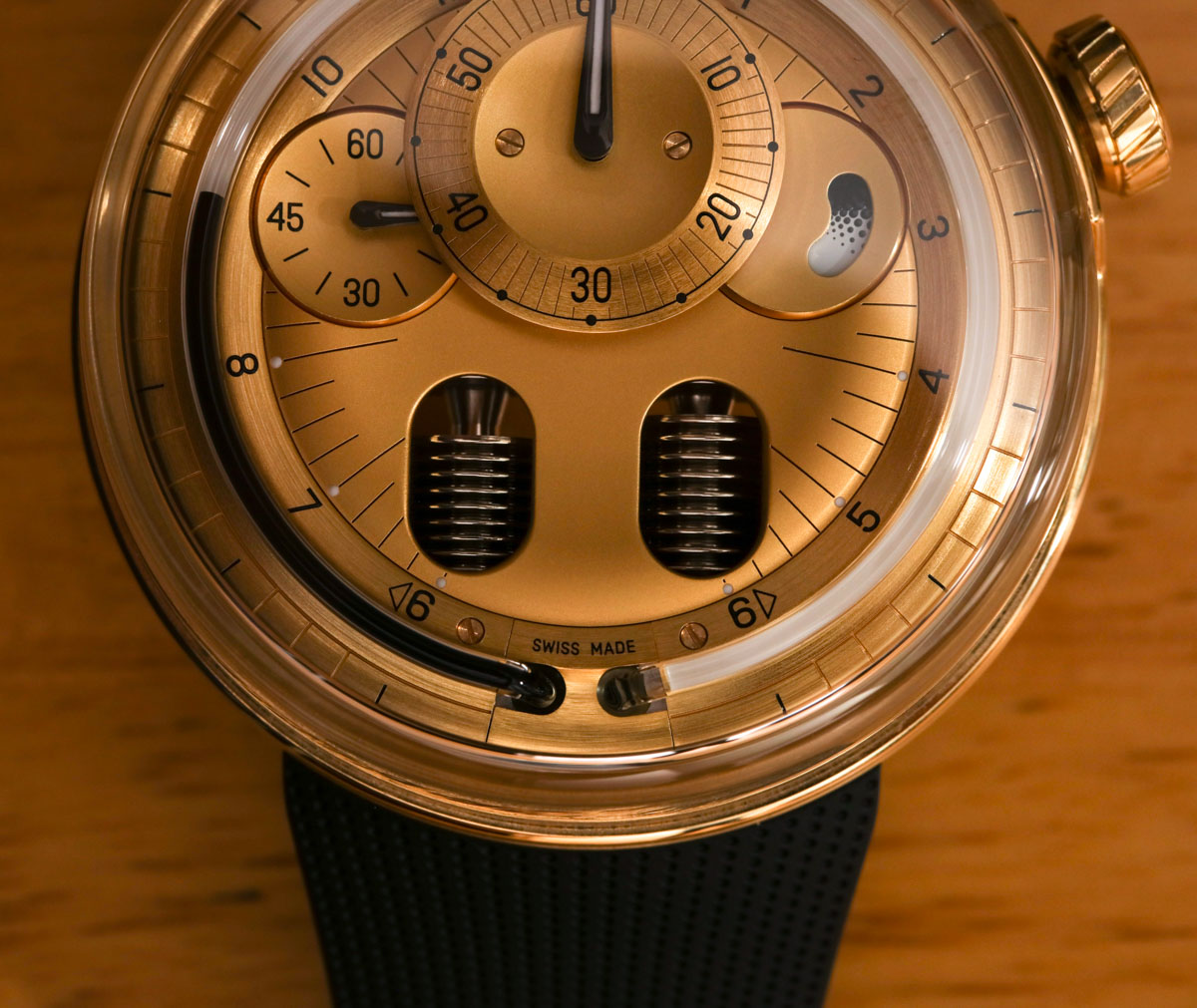 Paired to pale gold is black liquid (or red in another 2N gold model) in the “hydro-mechanical” hour marker indicator. Behind the sapphire crystal “capillary” tube is a luminant painted strip which glows in the dark assisting with reading the watch in low light situations. HYT’s caliber 101 manually wound movement powers the H0 just like it powers the H1. HYT colors the caps of the screws in the movement, which reflect in shades of purple as the movement surfaces play with the light – something I’ve not seen before in an H0 watch. Operating at 4Hz with 65 hours of power reserve, the movement displays the minutes and seconds on separate dials, along with a power reserve indicator opposite the subsidiary seconds dial.

For those fresh to experiencing the dial of the H0, understanding how to read the time can be a challenge. I receive slight sadistic pleasure while seeing people’s faces form lines of confusion when trying to know how to put the pieces of information together on the dial. It’s really just a variation on a regulator-style display, which has separate dials for the hour, minutes, and seconds. One just needs to know that in advance. Perhaps the biggest delight one can get from a timepiece such as this is being able to ignore the minutes and seconds altogether. Brand’s such as Botta and Meistersinger helped popularize the “one-handed” dial which only features the hours. Clearly the H0 isn’t such a watch but one can focus entirely on the tube for the hours to at least more or less know the time using the 12-hour format. Even then, a 24-hour scale for the time is displayed around the periphery of the dial, which is actually on the sides of the case. 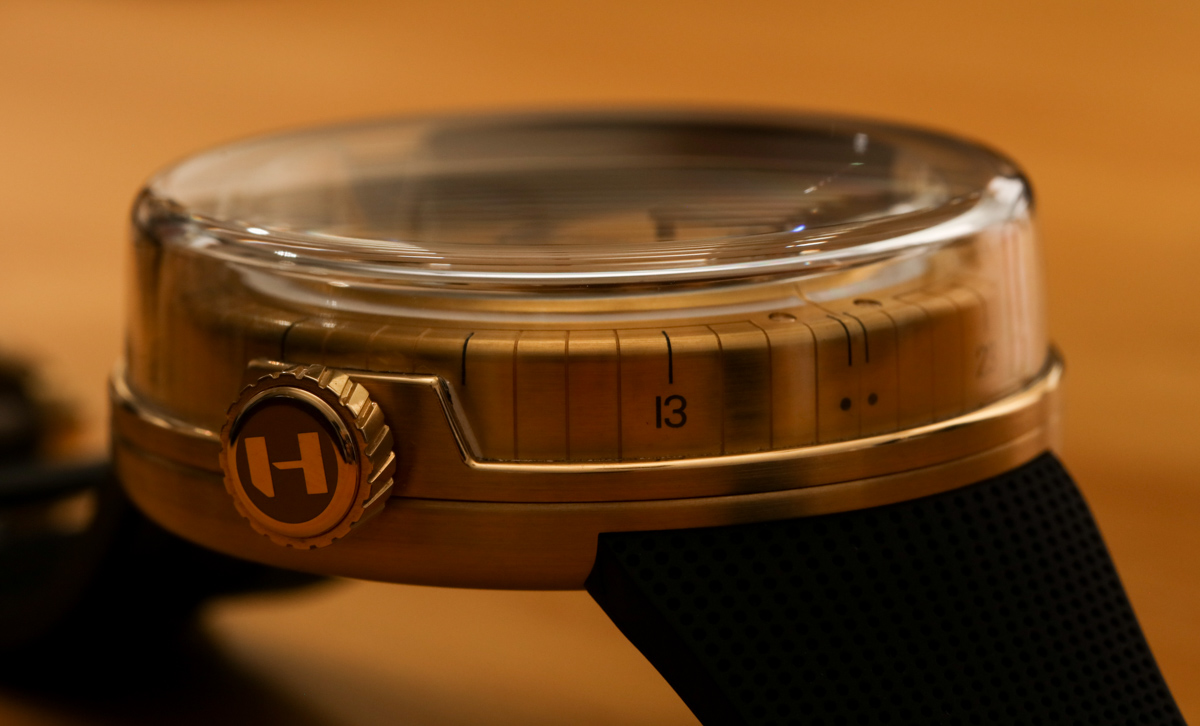 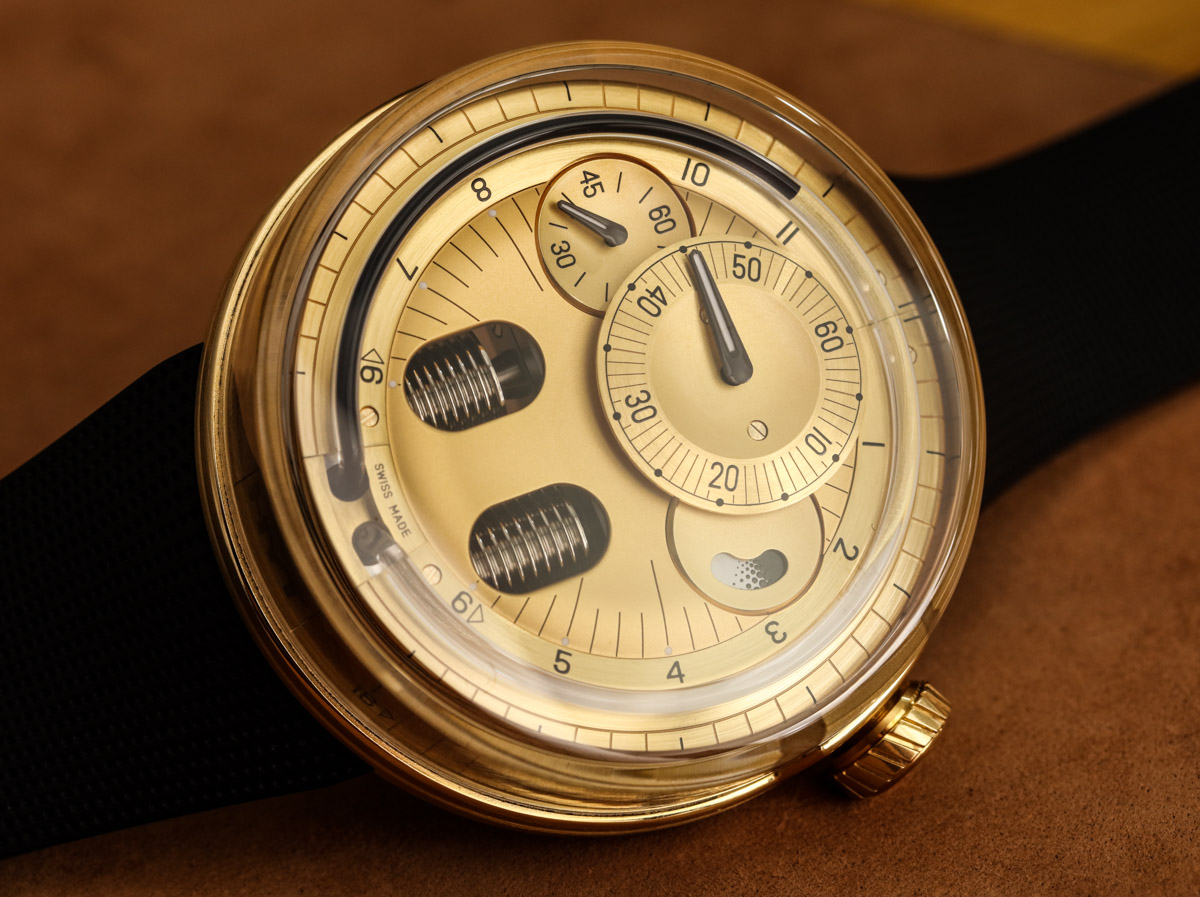 When it comes to making the liquid time-telling system operate properly, slowness is your friend. Everyone’s favorite part of HYT watches with the caliber 101 movement is to see the dial when the liquid hour indicator hits the end of the tube. This causes the bellows to reset and the opposing liquids to move the indicator point all the way back to the starting point. It’s probably the most interesting few seconds you’ll have just twice a day.

HYT chose the safe route in pairing the H0 2N gold with a black rubber strap. It’s a cool-looking strap and comes on a gold and steel folding deployant. The black color is however a bit predictable and with something this good looking and novel, I’d like to see a few more daring color choices for the strap. I want to add that HYT includes a small micro-adjust system in the strap’s deployant. That is a good thing. I did however find that the strap that came with the watch was very long – causing some excess strap to bulk up the look of your inner wrist. If HYT doesn’t offer a shorter strap option in addition to this length, they should probably start doing so… Oh, and HYT also offers a slick-looking matte black alligator strap that looks attractive with the H0. 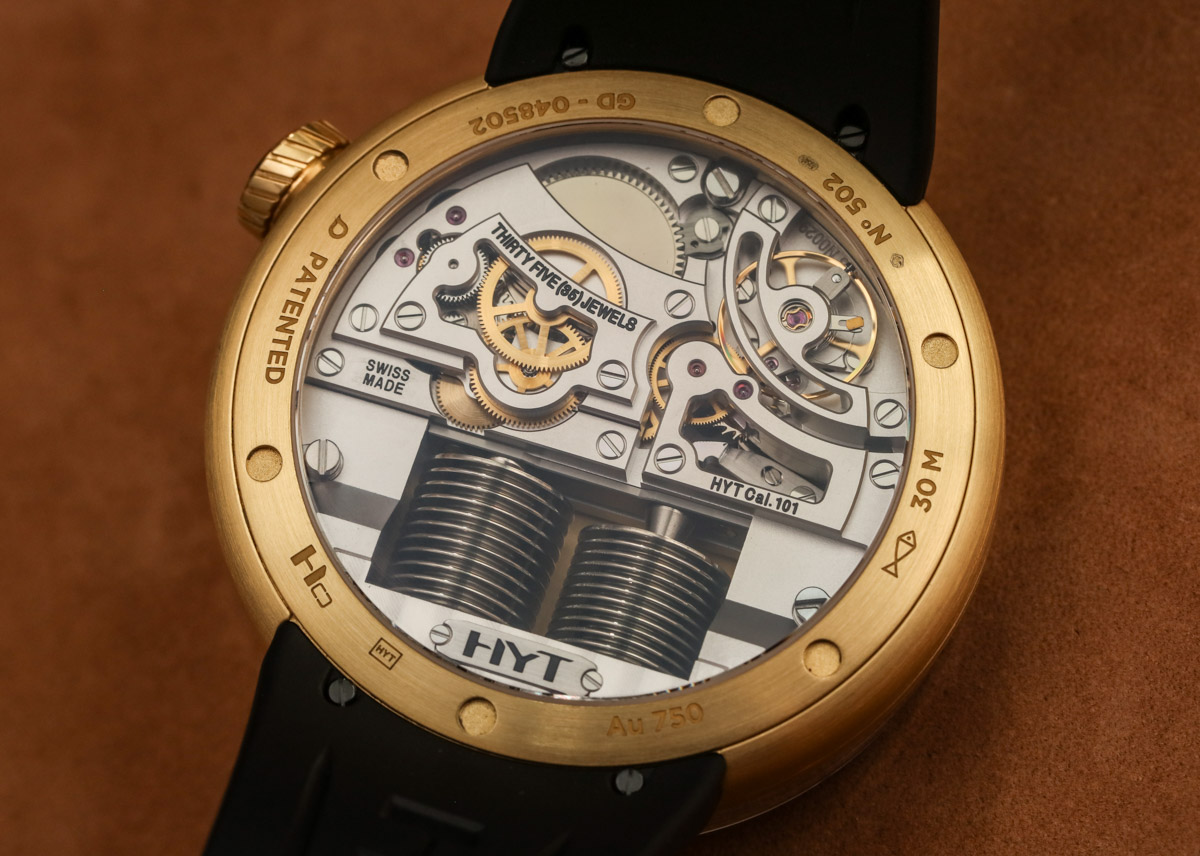 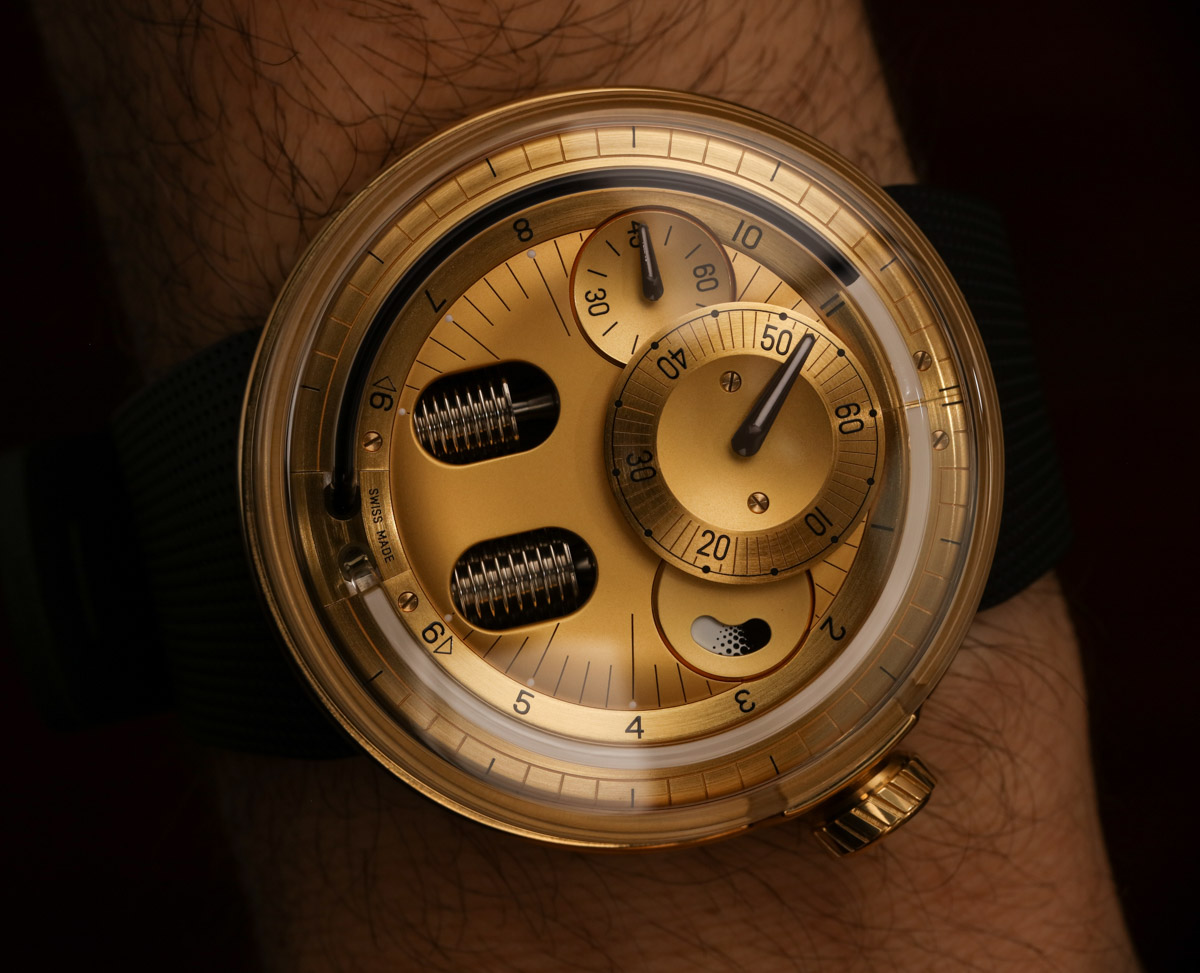 Why 2N gold or any gold for that matter in the H0 collection? One reason is because they have likely been asked to. There is still a healthy assortment of luxury watch buyers that don’t let anything but precious metal touch their skin. No steel or titanium will do. It’s gold and platinum for them exclusively. For those people there is the H0 with its champagne looks and champagne cost. Price for the HYT HO 2N Gold reference 048-GD-94-NF-CR is $54,000 USD. hytwatches.com