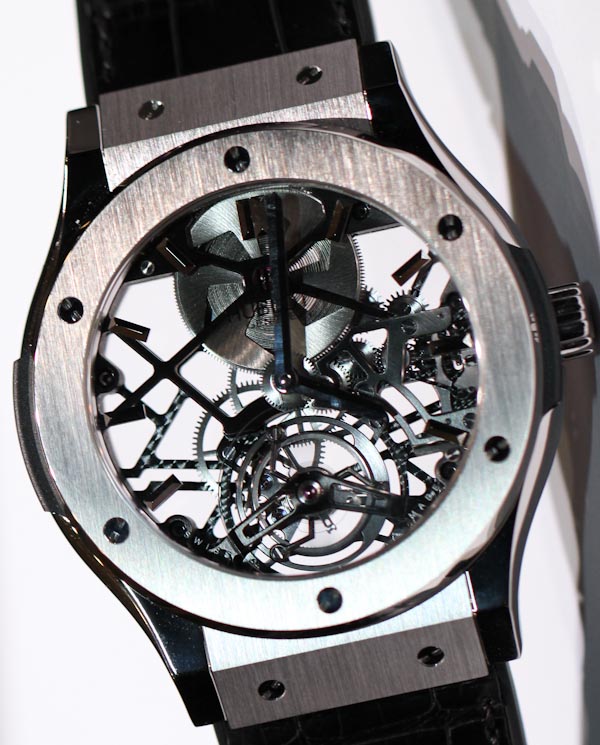 Baselworld Best: Timepieces To Watch In 2012

Leaving Baselworld each year is bitter sweet because I tend to have such a good time. I don’t get to see even a third of what I would like to check out, and it is great to be among my friends and close colleagues for over a week. It is tiring however, and during final days you end up forgetting you are there for watches. I love it though, and am proud to be part of the world’s biggest watch show. Next year I have decided I need to attend the show with a posse. Who is with me? I can promise there will be some nice watch fondling going on.

So I keep getting asked what my impression of the 2012 show is/was, and what I liked the best. Always a tough question as I just admitted to not having seeing all there was to see. That might be unfair as I did check out the majority of the “important” stuff from the big brands we are all familiar with. Overall impressions? I think it is a mixed bag. Some brands are full steam ahead with lots of new product and distinct global directions, while other brands have really nothing new. I don’t mean little brands that innovate once each few years, I mean major brands that ought to really have new stuff to show.

At SIHH 2012 I painted the picture that conservatism was in, and that also meant fewer new products as brands try to gauge regional economies, tastes, and buying habits. What you see a lot of these days are “commercially viable” pieces. I wasn’t the first one to use that term. You are reading this, so I give you credit for putting the idea so eloquently. Basically it means you look at a watch and it looks pretty aesthetically familiar with a reasonably good design and features mixed with a reasonably good price.  You then sort of shrug indifferently and think to yourself, “it bores me, but it will sell.” That pretty much sums up what your standard commercially viable watch is.

Are there innovative wonders and crazy pieces? Certainly, though more and more you get the feeling that they are just media bait and not serious parts of the brand’s direction or income. A great example are the high-end pieces from Tag Heuer. Their $50,000 plus watches are pretty awesome by most standards but they don’t make very many, and they are almost economically insignificant for the brand’s bottom line. We write about them because they are cool and because Tag Heuer’s top-level management think they are cool – but they don’t really represent the volume side of the brand. What will make Tag Heuer money are the sale of their commercially viable new Formula 1 watches, their relatively attractive new ladies’ watches smiled upon by Cameron Diaz (their newest brand ambassador), and entry-level luxury watches like the Aquaracer and Carrera.

The Swatch Group is a curious situation right now. Some of their brands are doing awesome with great new watches, as well as lots of new watches. That includes entities like Omega, Hamilton, and Rado. Then you have a brand like Glashutte Original – which I happen to like a whole lot – that save for one highly limited, super high-end watch, has nothing new for this year. They aren’t the only one like that. I chalk this up to some direction lacking at the CEO level and other issues that occurred as a result of Hayek senior’s passing away. It will clear itself up, but it will take a few years. There are good people over there, but some of the brands need more dedicated leadership, or more of a push to innovate each year. Having said all that, what I did see from some of the less prolific for 2012 Swatch Group brands was good – there just wasn’t enough of it to satiate my hunger for watches.

The Rolex situation is funny. If you recall when I discussed the new Sky-Dweller here, I posited that it was great to see an innovative movement from Rolex that expands on their offerings and provides something really new for them (in the modern sense). At the same time I didn’t run across too many people who liked how the thing looked. It will probably sell because it is a Rolex, and it is new – granted. Given that, I think that many people were disappointed because they loved the idea of the Sky-Dweller, but the execution just wasn’t what people expected. Who knows, maybe next year everyone will change their mind and compete to be the piece’s biggest fans.

Meeting with little guys like MB&F and DeBethune, and you’d think they are the center of the watch world given how cool their stuff is, and how much they are appreciated in the industry. What people like me can easily forget is that between the two brands they sell under 1000 watches per year – when millions and millions of watches are sold each year overall. It is true, being so involved in the watch world will naturally have you gravitate to the most interesting people and products – no matter how exclusive they are. We need to remember is that it is the high volume brands who are keeping watches on most people’s wrists. For that reason I think it is highly ironic and amusing that Casio presents their watches a few feet away from some of the most high-end and exclusive timepieces in the world. I actually think that is wonderful, because I get as excited about new Casio watches as I do the next greatest $200,000 timepiece creation.

Fashion editors and people of those ranks continue to sully the watch world with their questions on style trends and what is going be hot for spring and summer. Brands like to have the people writing for mass audience consumer publications that they advertise in come to the watch shows because it would be awesome for them to get some actual editorial coverage. That unfortunately isn’t going to happen because the average writer and reader of those publications doesn’t know about or care about watches (for the most part, and there are some really great notable exceptions). Unless they are colorful under $50 watches which do get a fair amount of coverage it seems. I am actually glad that the fashion people are there because I want them to see the world I love so much, but my advice to watch brands is to stop pretending that you are fashion brands. Be stalwart that you release nice new watches each year based on a range of factors that hopefully don’t include fashion trends or what is going to look “so hot” in the fall with orange and brown. I know I sound like a snob saying that, but that isn’t what makes this industry tick. This is an industry of half marketing people, have engineers. Each focused on making marketable wrist machines that tell the time for a long time. These items aren’t meant to be (for the most part) disposable, and are intended as lifetime investments. The current fashion industry is about disposable clothes and quickly changing color and style trend announcements so that they have something to actually “write” (list) about. That just doesn’t meld with the watch industry, and I hope it never does.

As I step off my semi-annual (weekly) soap box, allow me to direct your attention to some watches. Cool watches that made me giggle with glee and ponder the best ways to covertly remove (without being noticed) money from Credit Suisse in order to fund a couple of horological acquisitions. This is just a small list of those watches that leaving the Baselworld 2012 show remain on my mind. It isn’t a wild concept watch or something you want to wear only when you feel like a weekend military pilot. This version of the Bell & Ross BR 126 is just a sexy daily wear that is a little bit retro, and a lot of bit sexy. Comes on a strap or new metal bracelet. Beautiful. The Type XXII originally housed Breguet’s in-house 10 hertz mechanical movement. There it was used for a chronograph, here is used for accurate timing and horological interest. The iconic look of the Classique collection melds with the ultra modern high-beat movement for a quirky but satisfying result.

I don’t say this very often, but in this instance I am happy they made it smaller. The original Breitling Chronomat GMT was just too big for my wrist (it does happen). Down to 44mm wide, and given its already very wide and long lugs, this piece wears very well on me. The watch has an in-house made Breitling movement, chronograph, GMT, and style that is 110% Breitling. The watch isn’t new, but the original was delayed a few years. New for this year is the bracelet – and it makes a great watch even better. From the Daniel Roth collection, the  Bulgari Chronosprint Endurer is a beautiful watch with a very unique story and movement. The new bracelet is similar to what you get on an Audemars Piguet Royal Oak, and just makes this killer watch even nicer in my opinion. The nerd in me loves this, but is starting to realize that the Tread is no longer a nerd watch. With a smaller size and improved wearing experience, the Tread 2 opens up the concept to a whole new world of watch lovers that can enjoy the electro-mechanical belt system concept. Now with more color options as well. Last year Hamilton released the Pan Europ as a limited edition watch with a blue dial. It was successful enough to gain a spot as a non-limited production piece for 2012. The nicest model has a black face and the price is totally right. Inside the watch is a base Valjoux 7750 that gets bumped up to a 60 hour power reserve exclusively for Hamilton. Gorgeous design that mixes masculinity with history in a really satisfying way.

It does remind you of Roger Dubuis’ skeleton tourbillions – and that is OK. Hublot makes a skeletonized tourbillon version of the Classic Fusion in a good-size case that feels modern and classic, while also feeling very high-end and tasteful. Very thin to boot. People gasped at the low, low price of about $45,000. Amazing! Exotic, cool, modern, and the ultimate example of how a new high-end watch brand can hit the ground running. Almost guaranteed to help start conversations even with non watch people. Not everything with green goo can claim that.

First what I don’t really like – 40mm wide. Everything else I am in love with. Enough to be OK with a 40mm wide watch (I’d like it bigger). An incredibly attractive entry-level Omega Speedmaster collection that finally has a Co-Axial escapement and silicon balance spring. Hard to not love this one in its many color offerings. At first I didn’t like the look of the watch even though I liked the functionality. Then I started to play with the Pilot Doublematic and I put it on my wrist… at that point I was hooked. So many functions that are actually useful, great in-house made movement. And a price that feels appropriate. German indestructible tool watches don’t get much better than this. A proprietary chronograph module makes for awesome functionality, in a case that is light and hard. Sapphire crystal bezel inlay, and the feeling that you and this watch are going to see some heavy action and walk out just fine.