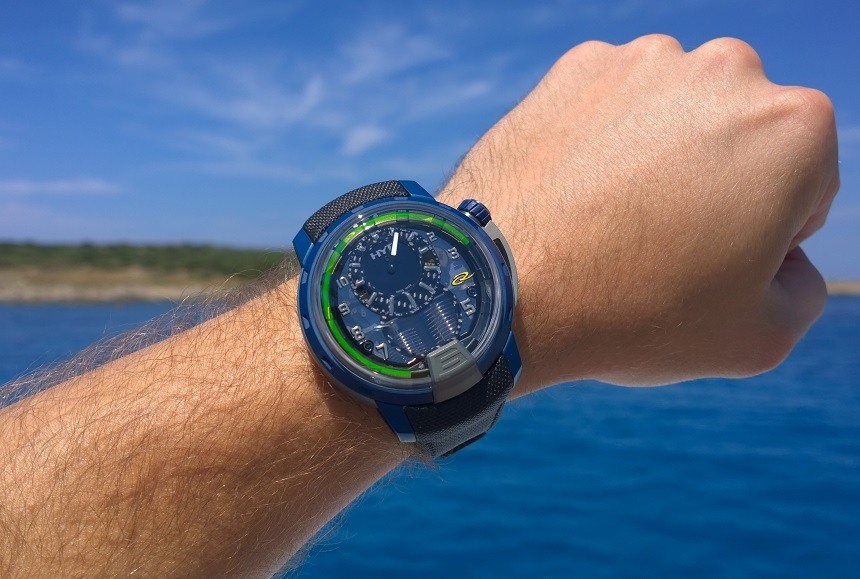 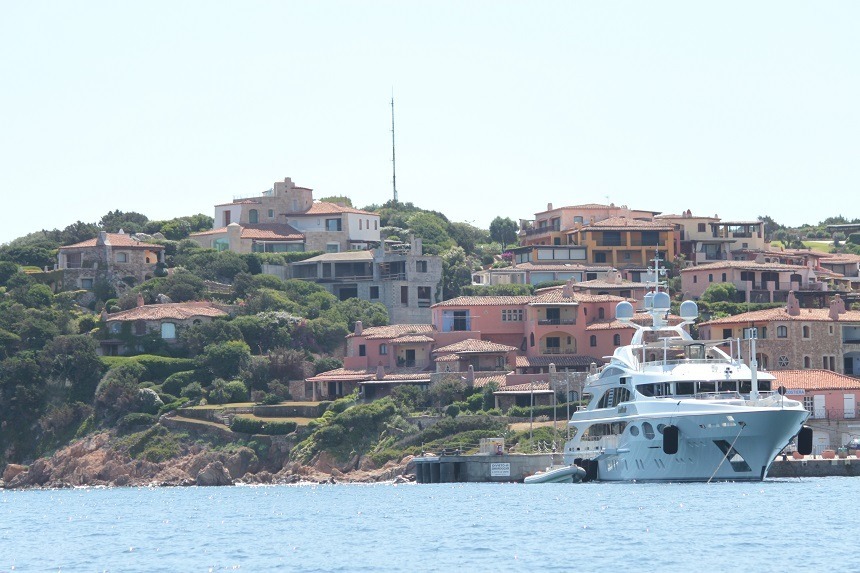 The RC44 Championship Tour is a yachting event held in five stages, based in five of the world’s most exclusive locations, over an annual season that runs between March and November. The Championship was conceived by legendary sailor Russell Coutts, 5-time winner of the America’s Cup. Founded in 2007, the RC44 class guarantees a level playing field for competitors. To ensure that the spoils do not simply go to the captain with the deepest pockets, all of the boats are built to identical specifications and the crews are required to adhere to a strict weight limit of 680kg.

Porto Cervo in northern Sardinia, Italy, staged the second of five legs between June 16th and June 21st, 2015. I arrived on the morning of Wednesday June 17th, just in time to grab a delicious lunch and meet the other members of the press and the representatives of HYT, which included CEO Vincent Perriard and Chairman Patrick Berdoz – that is before we hopped aboard a speedboat and zoomed out of the marina, straight into the action. The match race was under way. From a short distance, we watched as the professional sailors stood in for their amateur skippers and steered their high-performance 44-foot yachts through choppy waters in search of “good wind.” The winners and losers are separated by seconds, won and lost by knowledge, precision, and teamwork – three things that HYT apparently holds very dear to its liquid heart. 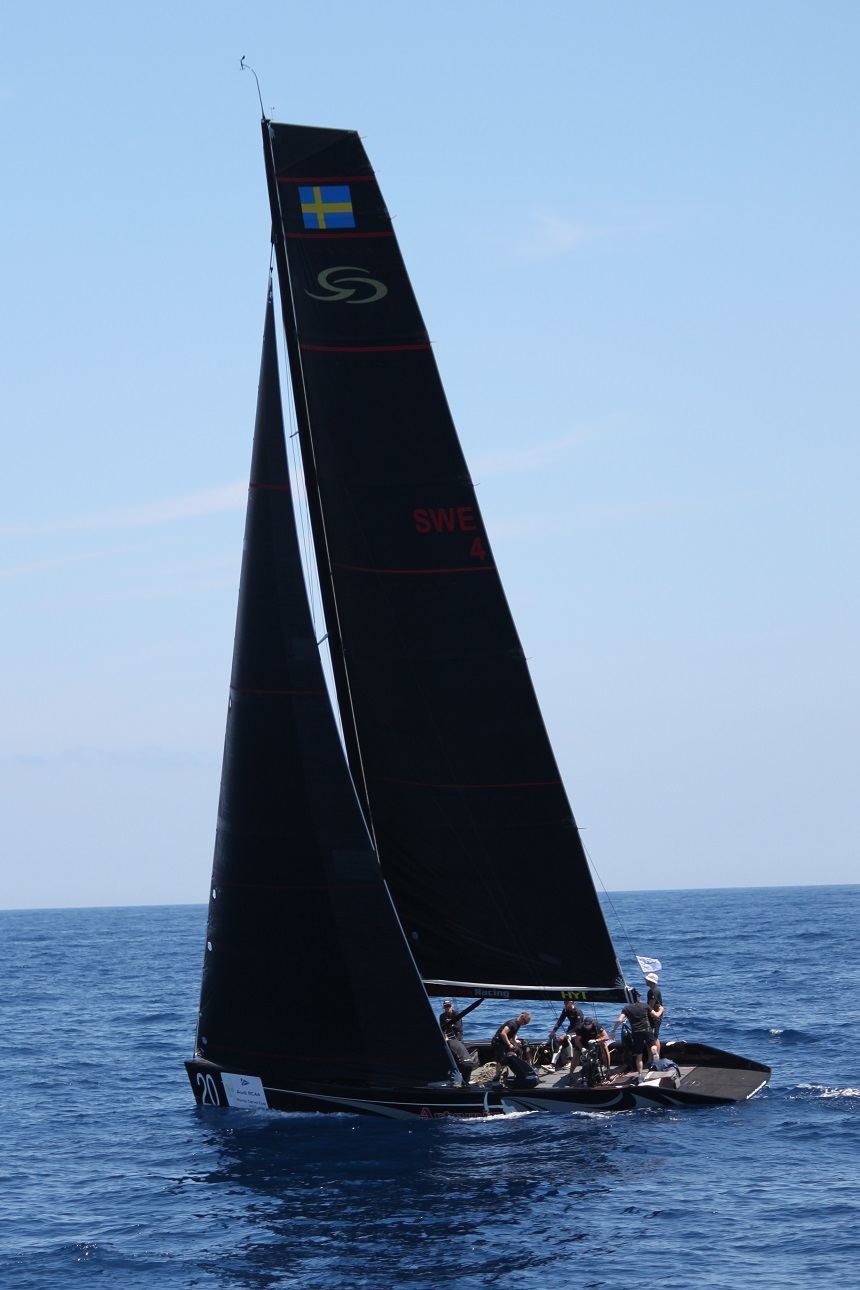 HYT is not a traditional watchmaking company. There are, of course, some traditional elements found in the movement that powers the unique display, but it is more than that. This is an experiment. Berdoz has a background in the medical industry, which provided the experience and contacts necessary to get HYT off the ground. When Lucien Vouillamoz, a nuclear engineer with a background in thermodynamics, first called him to tell him of his idea of using fluid reservoirs in watches, Berdoz saw an opportunity to develop a commercial product whose modus operandi might have some relevance to his own field of medicine (he was curious about how the micro-application of fluids could potentially benefit pharmacology). 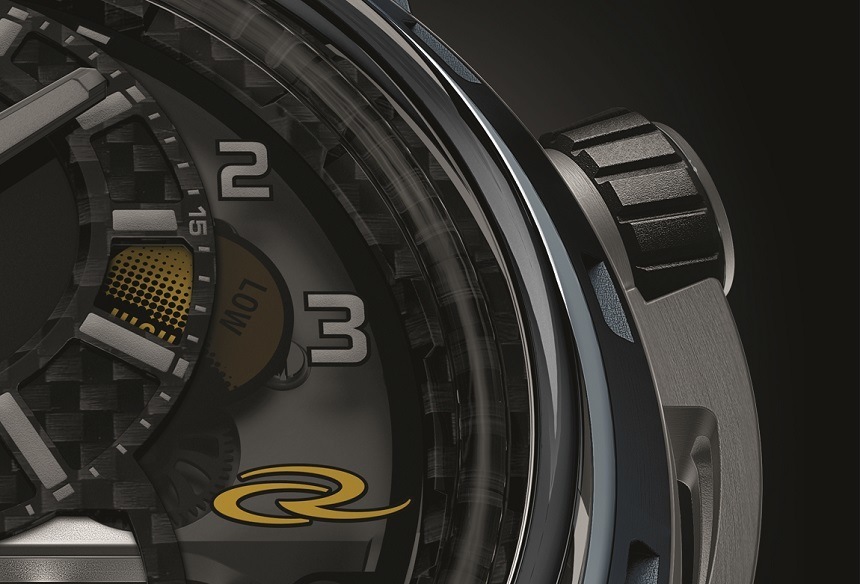 Perriard’s gusto and charm have propelled the initial concept in many different directions. The brand’s future and the technology behind their eye-catching pieces is becoming more refined. In order to improve the performance of the movement and liquid display, HYT have brought together experts from the fields of chemistry, tribiology, engineering, watchmaking, and design. Their headquarters in Switzerland is more laboratory than workshop and is, in my opinion, the kind of place horology needs more of. 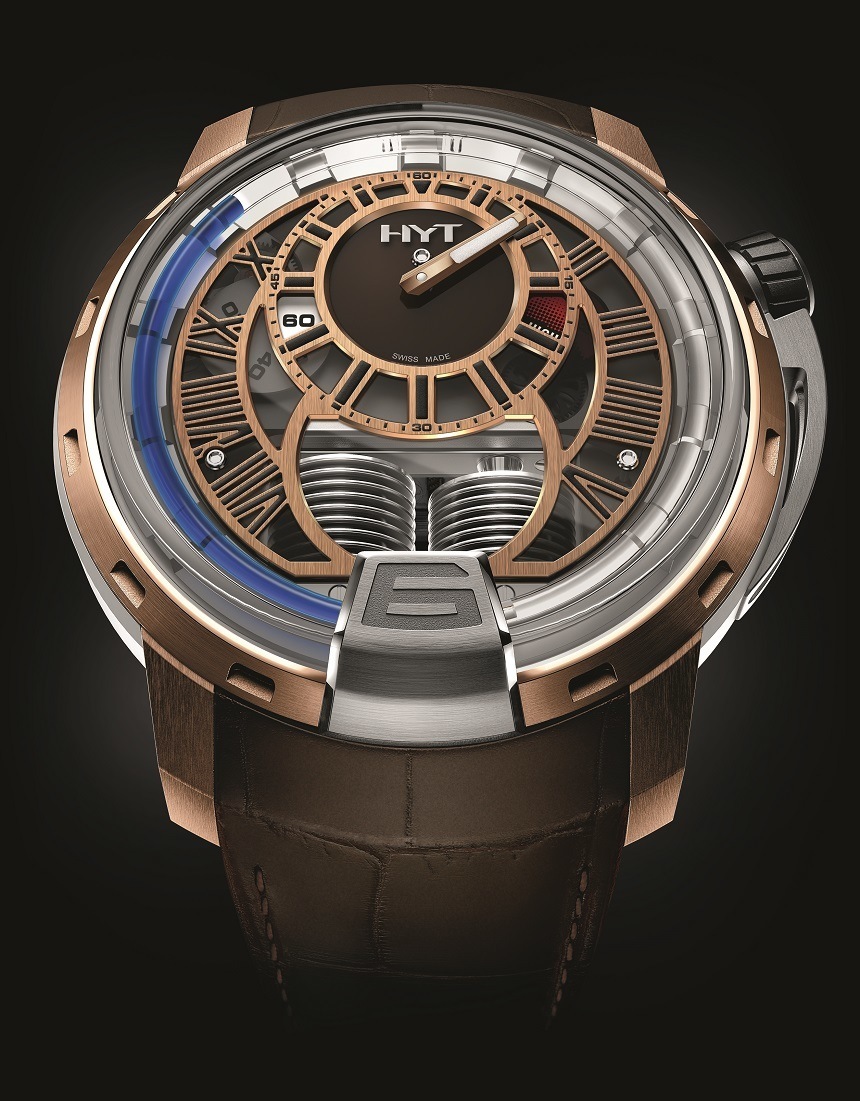 Staunch traditionalists probably don’t get HYT, and that’s okay. If your interest in horology is based on the idea of a man hewing from natural materials a mechanism that can record the passage of time, then the collaborative efforts of HYT could be seen as cheating. The way the company is structured and the clinical delegation of tasks to specialist arms of the brand flies in the face of the methods expounded by the late George Daniels – the idea that one man should dedicate his life to mastery of every trade skill needed to make a watch from scratch. That pursuit is laudable but can take an entire lifetime. HYT has created something that one man alone could never hope to achieve. And they’ve gone from conception to the release of the HYT H1 Air RC44 in less than a decade – and even less to the release of their first timepiece. That’s pretty fast work. But they are not done yet; there is much more to come. 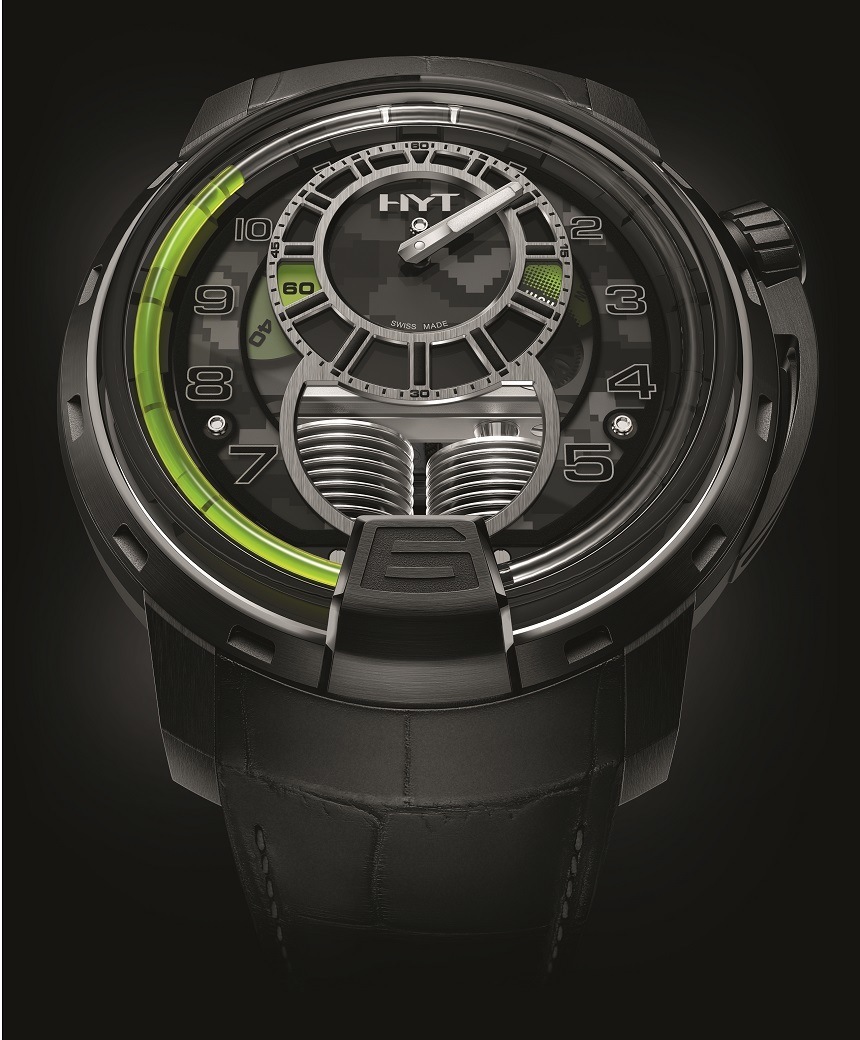 Perriard speaks with a glint in his eye whenever the subject turns towards the future. It is clear the next decade is already mapped out in his mind. Although he is keeping his cards close to his chest, he is happy to talk about the brand’s intention to harness the power of the pressurised fluid used to indicate the hours. We have already seen the implementation of this idea in the HYT H3, which uses the energy accumulated in the springs of the bellows to flip the hour-indicating abacus every six hours. But Perriard and Berdoz want more. Exactly what, we will have to wait to find out, but it promises to be every bit as inventive and novel as the output thus far. The HYT H1 Air RC44 is a limited edition update of the model that dropped jaws the world over. Only 22 pieces of the HYT H1 Air RC44 will be made available, and they are likely to fly off the shelves (there will be 25 each of the Classic and Black Pixel models).

The key to branding, and thus being able to develop future products that align with the original vision, is simplicity. One sentence. One perfectly distilled sound bite that tells the world what you’re about. Perriard claimed he could present HYT’s brand DNA in five seconds. He only needed two (including a dramatic pause).

“Watchmaking; fluids.” I waited for the convolution that never came. 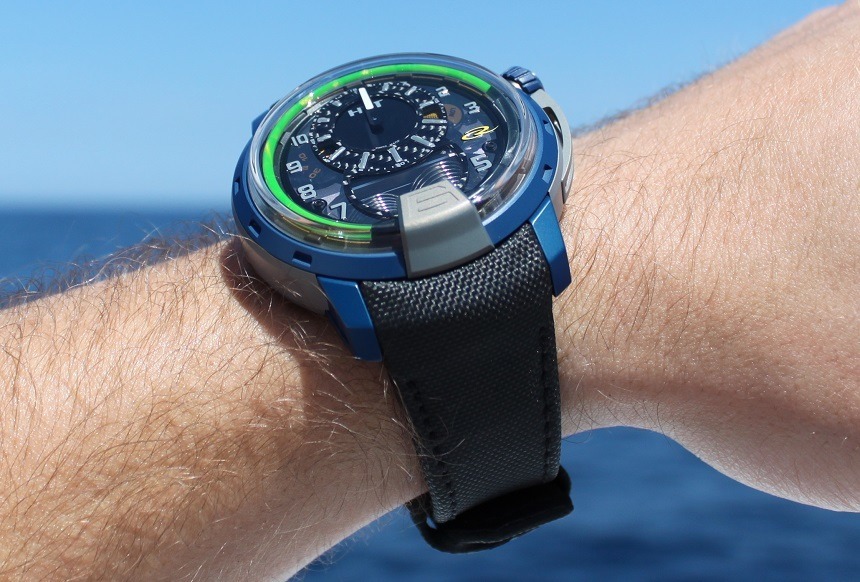 An idea that simple, that pure, takes dedication and focus to execute effectively. The temptation to dress it up, to deviate in search of a wider reach must be avoided. It takes people who truly believe in the concept and have their hearts invested in its future. Both Perriard and Berdoz have passion in spades. There is not a shred of arrogance about the pair, who saw their brand start winning awards just months after the physical launch of is first piece. There is a quiet confidence and a palpable pride in what they have created. And I don’t mean the company and its reputation – I mean the watches themselves. They are like two fathers observing an over-achieving brood. Their love of innovation, their celebration of difference, and the general joie de vivre they exude as people has certainly made its way into their wares. It’s quite possible that the partnership with the RC44 Championship Tour is the first of many collaborations to come. 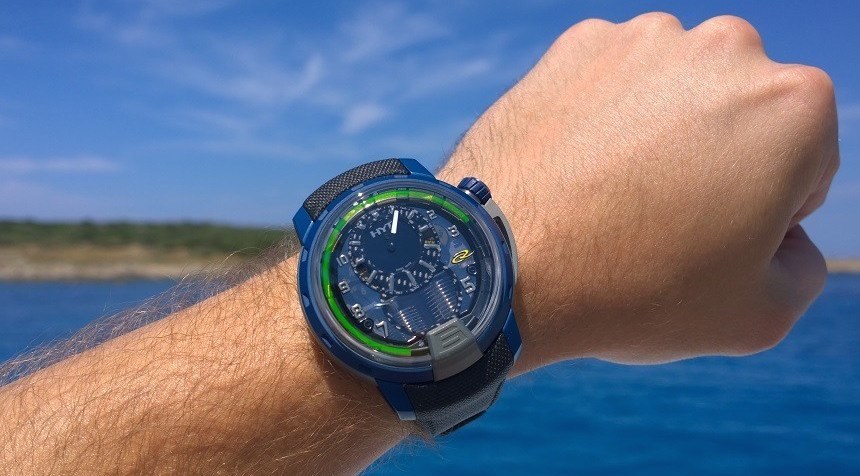 It seems crazy that a brand with such a unique selling point is so easily described. In watchmaking, uniqueness is often niche and obscure; in the case of HYT, their fluid display can arrest attention from across a room. If they continue to harness that potential, the sky’s the limit for this ground-breaking brand. The HYT H1 Air RC44 will be priced at $75,000. The HYT H1 Air Classic has a price of $79,000, and the HYT H1 Air Black Pixel comes in at $64,000. hyt-watches.com