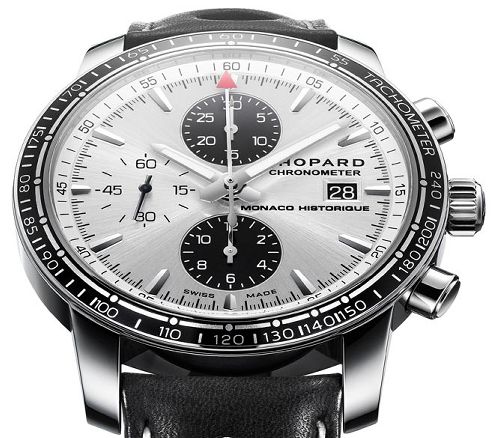 The Mille Miglia line of watches is likely to be Chopard’s best selling men’s line. The broad model line continues to evolve over the years, but maintains a wonderful following due to highly recognizable looks. A few years ago, beginning with the XL line of models, the Mille Miglia line began to grow up, literally and stylistically. The XL line is bigger and more futuristic in its representation of racing watches. Regardless, Chopard has always been dedicated to classic looks, and maintains a strong foothold in tradition.

Two new watches point in both chronological directions. The first is not technically part of the Mille Miglia line, but aesthetically it cannot be removed. The Chopard Grad Prix de Monaco Historique 2008 watch in steel is a new production watch, with a rose gold limited edition of 500 pieces, and is an homage to the Monaco Automobile Club. Looking at the watch, one can immediately recognize the Mille Miglia underneath the classically styled watch. Use of dark circles in the upper and lower registers give the watch a bicompax look, which preserving the functionality of the watch’s Valjoux 7750 movement inside by maintaining the third register (which keeps color of the rest of the dial).

The watch is a comfortable everyday wear, having good legibility and chronometer accuracy. While difficult to tell in the picture, the leather strap features a porthole design placing large open circles in the strap. This is mostly stylistic, but helps reduce sweat a bit. Sized at 42.5mm, the case is acceptably large, without going in to XL territory. Around the bezel lays the necessary tachometer (also spelled tachymeter; and is for a racing watch), but here it is largely decorative. While it can easily be used with the chronograph, in my opinion it is placed a bit too far from the chronograph seconds hand to be read easily; minor quibble. Aside from that, the large red arrow at the tip of the chronograph seconds hand is a delight. Adding a nice sense of color to the otherwise sober looking watch. I think you will agree that this is a purely classic racing watch. Perhaps not innovative in its interpretation of the past, but it really does not need to be. The audience this watch is aimed for will appreciate its nice lines, and historic appeal. I imagine pricing to be in the $3000 range for the steel version. 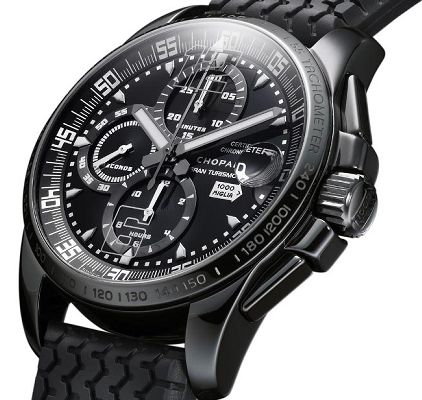 Not to seem staid, Chopard also just released the Speed Black Chronograph. Part of the larger Mille Miglia Gran Turismo collection, this future racing watch takes styling cues from the existing line of the Gran Turismo watches, along with super expensive racing watches such as Richard Mille (average watch is about $80,000). A while ago, I predicted that Swiss watches were going to start emulating the Japanese by using DLC (Diamond Like Carbon) coating on their watch cases. Companies like Ball, and now Chopard are fulfilling my prediction by using the sophisticated coating technique to add quality to their watches. DLC coating is a virtually unscratchable coating that adds a dark sheen to surfaces. Used for a few years of such watches as the Casio MR-G line, the Swiss waiting until it was a proven technique, and now they are emulating it. It goes without saying that the Chopard Speed Black Chronograph has a DLC coated case.

Style wise, the Speed Black Chronograph is interesting. A cluttered design is likely meant to reminisce contemporary dashboards, will hearkening to the machine soul of every car. Fonts used are technical in appearance, and the raised boarders on the chronograph registers give the watch a more three dimensional and layered look. Use of an upside down cyclops crystal is an excellent way to have a flat surface while providing date magnification (the magnifier is located inside the watch, rather than on top of it). Also placed on the inside of the crystal are stenciled “12” and “6” indicators (just as used on most Richard Mille watches). This a modern approach, and I have yet to determine whether I like it. Regardless, it does make for a more eye catching design, and again, enhances the layered look of the watch face.

Like the Gran Prix de Monaco Historique, the Speed Black Chronograph embodies a Valjoux 7750 movement and is a certified Chronometer. Right now, the Speed Black Chronograph is part of a 1000 piece limited edition, and I imagine they will go fact. The watch also has my favorite feature of any Mille Miglia watch, that being the tire tread strap. Chopard still does this the best, using a pattern taken from 1960’s Dunlop racing tires (obviously not ultra-slicks). Such straps just look superbly cool sitting on your wrist. Always a good idea. Figure prices to be a bit higher, perhaps in the $5000 – $6000 range.