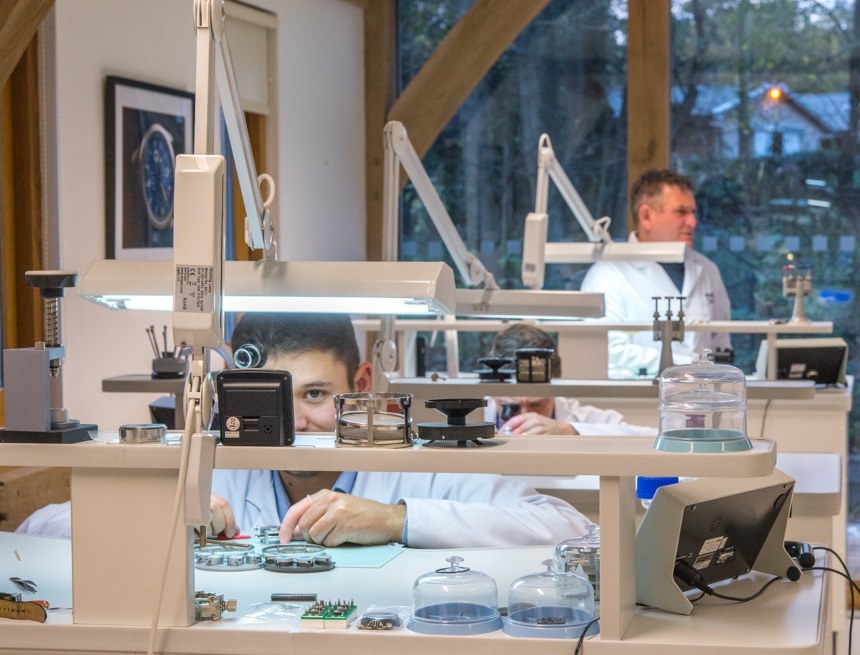 It’s early morning on a grass airfield where planes sit in neat rows and no paved runway is anywhere to be seen. Wearing a well-used brown leather aviation jacket, Nick walks us over to an early-1950s Broussard military plane with seating for six and the personality of a small French town’s passenger bus… if it were a small plane. A large “Bremont” logo is painted on the side of the intentionally vintage looking aircraft that we are about to explore the sky in. Seated in the pilot’s seat, Nick isn’t able to get the plane started because of the fuel pump. Reaching in to the back, he grabs an absolutely ordinary polished steel wrench – which just happens to be the international symbol for either breaking or repairing things. Bending over in the already extremely cramped cockpit space, Nick politely curses at nothing in particular as he is literally banging the wrench on what turns out to be part of the fuel pump system. A few assertive clanks and couple of “jolly goods,” and ol’ Bremont Broussard’s Whit & Pitney American engine is purring like a geriatric cat eager for another run through the sky. With a limited edition Bremont P-51 Mustang on his wrist, Nick English transforms into someone I’ve never seen before, as the congenial, crowd-pleasing, good-natured socialite I know so well goes into aviator-mode as the plane hops along the bumpy grass runway into the air. Flying at just a couple thousand feet, the view of the English countryside is breathtaking. Nick turns out to be a great pilot, showing us how deftly he maneuvers the personality-rich aircraft through the sky, pointing out, among other things, the George Harrison estate, where the Gettys have a home with an outdoor opera stage (for summers), and the Bremont watchmaking facility in Henley where watchmakers on their lunch break can easily see the low-altitude-flying plane circle as we admire the sheep-laden surroundings where Bremont timepieces are assembled. This is the real Bremont and, like most serious timepieces, theirs aren’t produced in the heart of a city but rather in the calm surroundings of a country setting where watchmakers have traditionally done their best work. City life creates demand for fine timepieces today, but it’s more traditional living which ultimately allows instruments of this nature to be produced in the first place. With a width of two meters, the Jaguar F-Type R Convertible looks stunning but barely fits on the countryside’s B-roads. Out of the sky and back on the ground, the new Jaguar F-Type R AWD we are driving roars down the embarrassingly narrow country roads which UK-residents commonly have an enormously wide love-hate relationship with. Few people in the parts of England we saw seem to pay much attention to speed limits, but then again, they are naturally set by the basic instinct to not die. An English brother may or may not have had an unfortunate F-Type-destroying slide off the road thanks to a slippery accident involving a “fun” speed and too much turning. Bremont, of course, has an enviable official relationship with Jaguar producing a small collection of timepieces inspired by the instrument gauge of a classic Jaguar E-Type. The Bremont Jaguar Mk1 inside the F-Type, and the MK2 piece in the original E-Type Just such a vehicle in perfectly restored condition sits in the family’s garage having been purchased and maintained by their father. It is an English family heirloom and probably helped spur Bremont’s relationship with Jaguar which has the English brothers and Jaguar’s head of design Ian Callum as close mates. With things like Martin-Baker, Jaguar, Norton, the HMS Victory, and more, Bremont is slowly integrating some of the most important elements of British engineering and culture into their products. The wonderful thing about it is that none of these items feel gimmicky – and funny enough, so many of them could on paper. If there is one skill the British have that most any other culture should be certainly envious of it is the ability to make silly things seem entirely serious, if not utterly appropriate. They call it “charm,” and it works not only in Bremont products, but in the people themselves who make and design them. Bremont’s investment into British watchmaking is also noticed by their watchmaking staff – who, for the most part, are Swiss trained. Bremont even sends their watchmakers out to receive further training because finding good watchmaking help in the UK is tough outside of the most basic type of watch servicing technicians. They are building up a knowledge and skill base of talent that they need in order to keep building and servicing their watches into the future as they grow. Nick and Giles English have very successfully shared their vision of the Bremont brand with their staff as well as the watch lover community. All they need to do now is maintain the same momentum and keep growing, which is in many ways their ultimate goal and a more intense challenge yet. I’ll admit that when visiting pretty much any serious watch making facility, it is hard not to fall in love with the brand. This is because any potential smoke and mirrors of marketing fades away in favor of seeing how the watches are actually made and lovingly handled. The design of a brand’s watches are also deeply inspired by the company’s immediate surroundings as well the daily lives of the designers and company owners. You can’t experience that remotely, but when you do “go to a brand’s home,” it comes with a much deeper appreciation and also empathy of what the company and its people are all about. The Bremont manufacture in Hanley-on-Thames, about an hour’s drive from London. Bremont is not without its challenges, but they have problems a lot of their competitors would like to take a stab at resolving. With interest coming in from many directions, the English brothers are strapped for time, having to deal not only with the company’s many (many) partnerships and special clients, but also the brand itself, in terms of new product development and the delivery of actual finished watches. They’ve done this well so far, and I don’t think their steam is running out soon, so long as there are new places to go fast and people to share their passion with. In the meantime, I’ll eagerly anticipate what great British timepiece Bremont comes out with next. bremont.com