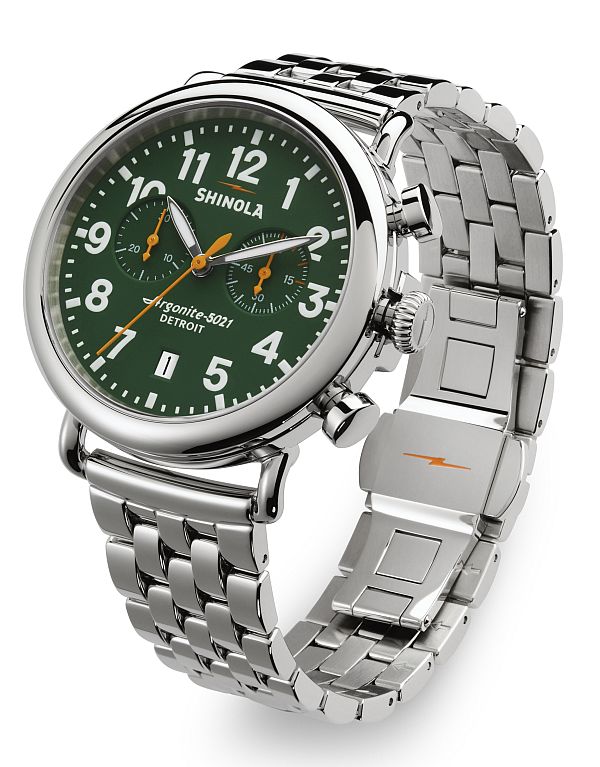 Shinola is very likely a brand that needs no introduction to readers of this site. They seem to be one of the few bright spots of good news hailing from my old stomping grounds of Detroit. They’ve released a variety of well-designed leather goods, bicycles, and three-hander watches. On the watch front, they’re upping the ante by adding a new size to one of their more popular models, the Runwell Chronograph.

It’s not surprising to hear that the new model is simply called the Runwell Chrono 41mm. As with their other models, this is a quartz-driven piece. This model uses their Argonite 5021 movement, which is assembled from 84 components provided to them by Ronda. This movement is housed in a fully polished 41mm stainless steel case. The overall feel of this case is one of compactness. You don’t have a lot of extra steel to the edges of the dial – just the bezel, and then its onto the side of the case.

And, for this model, that’s where things really shine.  Prior to this model being introduced, if you wanted a Runwell, you were jumping into the deep waters of a big watch, as it came in at 47mm.  Now, for many, that’s not a bad thing.  For others like myself, though, you get over 46mm, and it just feels plain too large.  At 41mm, though, you’re getting a Goldilocks case size – juuuuust right.

For its compactness, though, it does carry a beefier feel – a good thing for a men’s watch like this. The steel surrounding the bezel isn’t slim, and the height of the case rising up from the curved lugs (think of them as heavier-duty wire lugs) is not insubstantial – likely due to the chronograph complication being added. Under the domed sapphire crystal, you’ve got a less-common green and white dial (Michigan State colors, anyone?), with orange accents making their appearance (if you prefer, there are three other color combos in the 41mm chrono range).

In terms of functionality, this watch still hews closely to the aesthetic we’ve seen from prior Shinola models. You’ve got the basic time and date readouts, of course, plus the additional stopwatch feature. This is a little less “robust” than other models you might be thinking of, as you only have a 30-minute sub dial to track the time. Frankly, I think for most of us, that’s an adequate amount to be timing something via your wrist. Any longer, and odds are that you’ll forget that the chrono is running, and not end up with the data you wanted in the first place.

The Runwell Chrono also comes on a rather nice stainless steel bracelet. This changes the look of the watch a good deal, as we’re more accustomed to seeing Shinola pieces on leather straps. It looks like they’ve given the end link a slight curve, which helps to reduce the gap from the edge of the case to where the bracelet starts up, along with leaving the lug attachment flexible (whereas a fixed endlink would not). The 5-link bracelet is polished (just like the watch case), and has a signed deployant clasp that creates a smooth outer surface under your wrist. 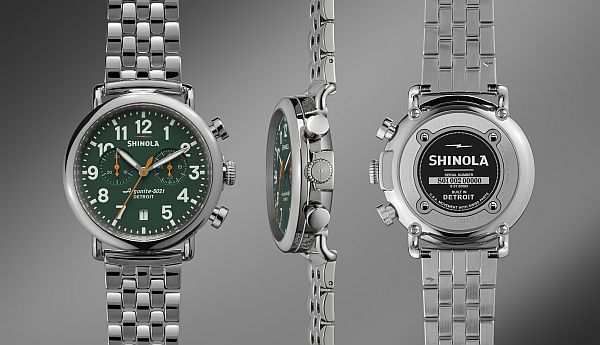 The overall look of the piece is cohesive, though it is a bit jarring at first with the 6 o’clock numeral being missing (that’s where the date display shows up). The handset is one that appears on other models – while a touch narrower than I’d prefer, they’re well proportioned to both one another and the size of the watch. While the styling itself isn’t anything earth-shattering, it’s one that you won’t find glaring issues with, and it’s following the same lineage set out by the rest of their collection. At an asking price of $900, this looks to be another excellent US-assembled entry from the folks over at Shinola.  shinola.com