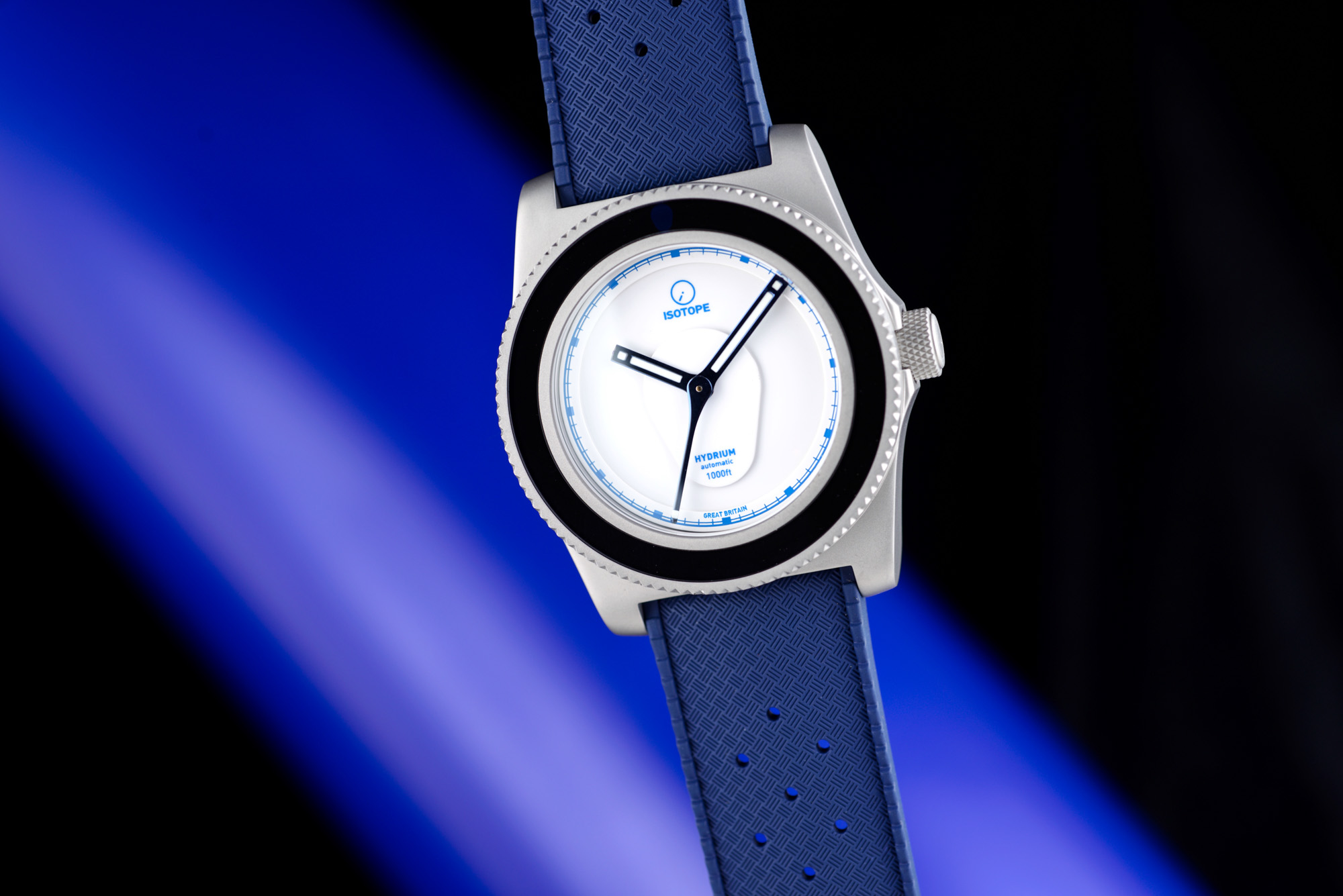 Within the densely packed landscape of small-scale independent watch brands, Isotope is one of the few that truly stands out due to its fun and often unconventional designs. Just like anything that is different, Isotope’s aesthetic approach won’t appeal to everyone. However, I’m personally a big fan of the brand’s watches, as they offer something truly unique at what is ultimately a very reasonable price point. Originally introduced in 2021, the Hydrium series is Isotope’s lineup of dive watches, and in the relatively short amount of time since making its first appearance, the Hydrium has served as the foundation for several different limited-edition variations. The latest addition to the collection is the Isotope Hydrium Alba, created in collaboration with the popular horology podcast Scottish Watches. This new model reimagines Isotope’s unconventional dive watch with an elevated enamel dial and thermally treated handset in the blue and white colors of Scotland’s flag. 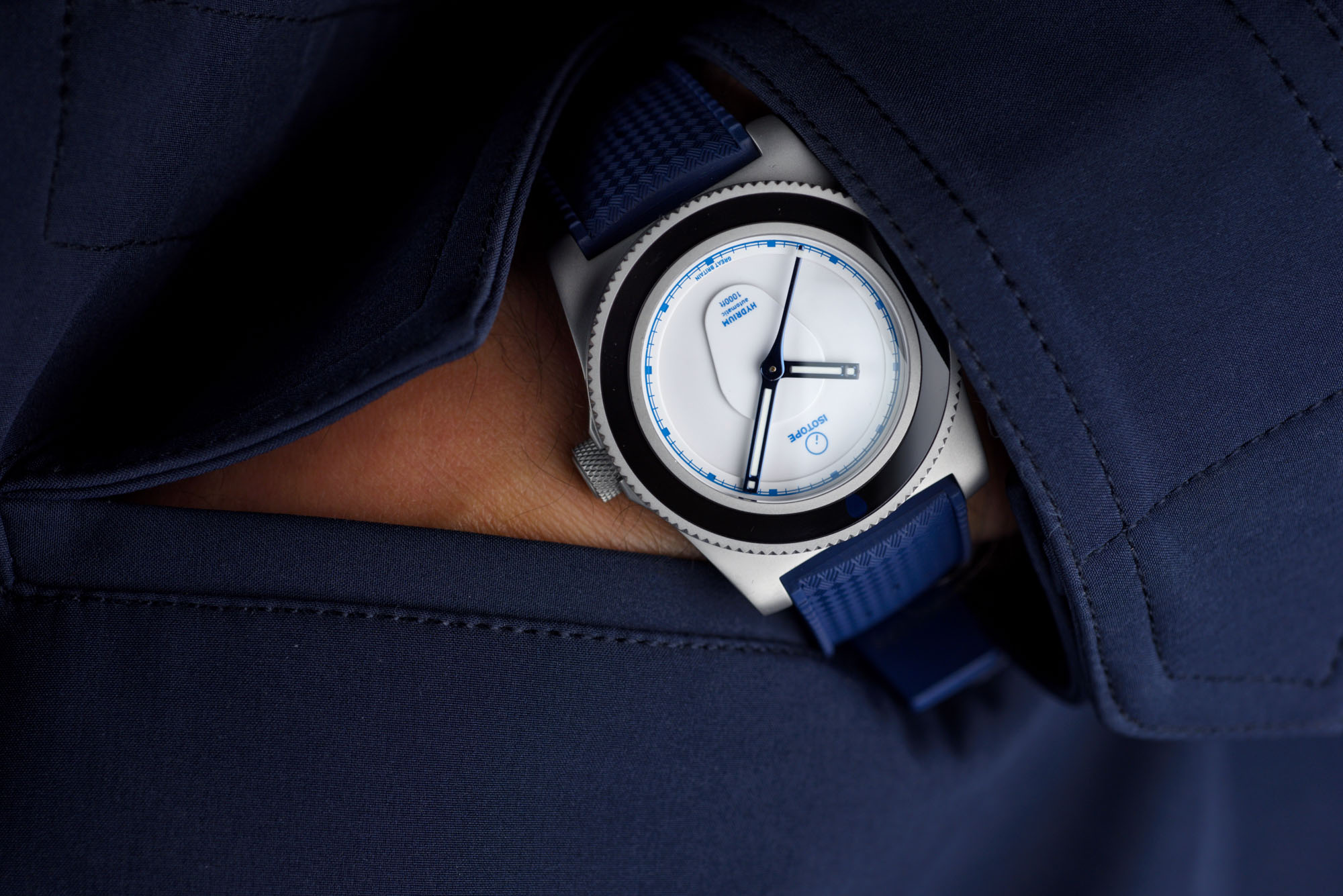 The concept of isotopes (as in the scientific meaning of the word) dates back to Glasgow, Scotland in 1913. In the same way that the word “isotope” means “coming from the same place” in Greek, Isotope’s watches all incorporate a distinct design language based around its signature “Lacrima” (teardrop) shape. Similarly, Isotope frequently reimagines its various models as different limited editions, making the “Isotope” name itself especially appropriate for this particular brand. In addition to being a collaboration with a highly popular watch-centric podcast, the new Isotope x Scottish Watches Hydrium Alba also can be seen as a subtle nod to the origins of the scientific concept of isotopes, which was discovered by radiochemist Frederick Soddy and awarded the Nobel Prize in Chemistry in 1921. Other than embracing a refined blue and white color profile, there isn’t really anything overtly “Scottish” about the new model, which means that this new Hydrium model will likely have a decent amount of widespread appeal outside of just Scottish nationals and super-fans of the podcast. 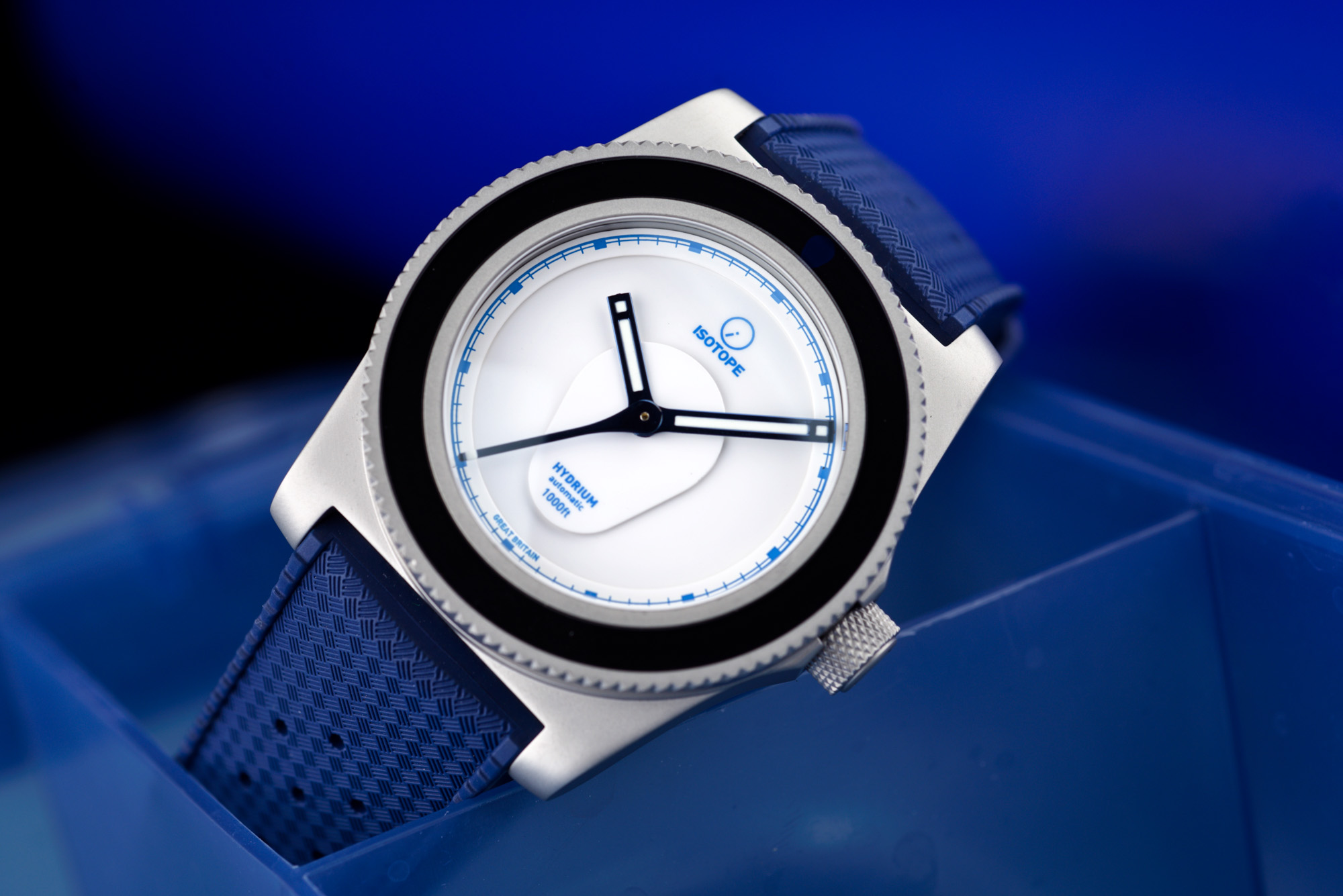 The micro-blasted stainless steel case of the new Isotope Hydrium Alba will be instantly familiar to those who have previous experience with the brand’s other dive watches. It measures 40mm in diameter by 48mm lug-to-lug, with 22mm lugs and an overall thickness of 14.9mm, which includes the double-domed sapphire crystal that sticks up above the edge of its case. While the core case design is identical to the Isotope HydriumX “The Judge” model that I recently reviewed, there are a few notable differences with regard to the externals of the new Isotope Hydrium Alba. While the 120-click unidirectional bezel is still fitted with a sapphire insert, the insert is now black in color and is completely devoid of any markings whatsoever, including even a zero marker. Additionally, rather than having a display caseback like on the HydriumX model that I reviewed, the Isotope Hydrium Alba features a solid stainless steel caseback with a deep engraving of a vintage diver helmet, along with each model’s individual number out of a total of 100 pieces. With that in mind, despite the difference in caseback, the new Isotope Hydrium Alba still offers the same 300 meters of water resistance, facilitated by its signed screw-down winding crown located between two small crown guards at 3 o’clock. 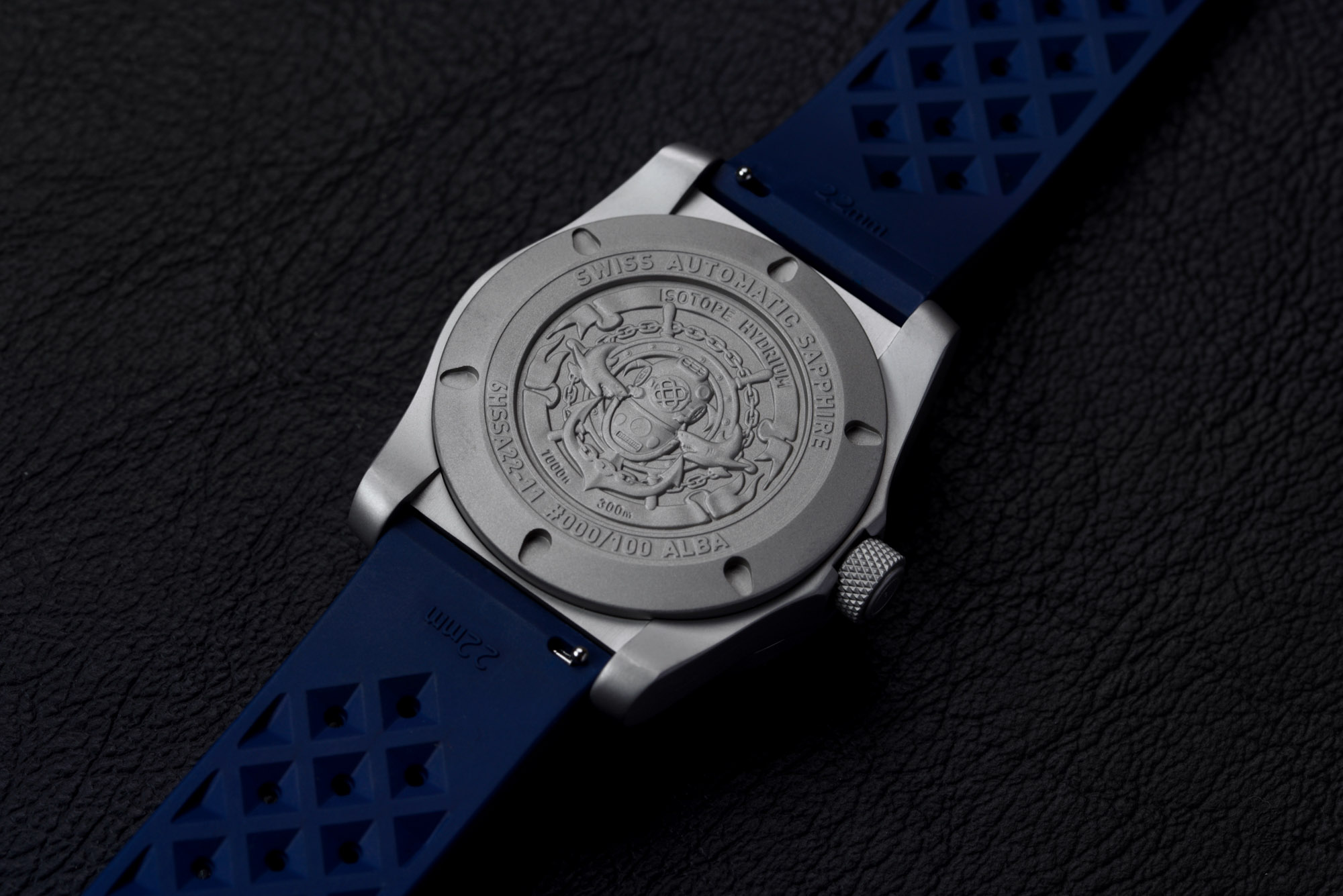 While the case offers largely the same overall package as other Hydrium models, the dial and hands offer a significantly different overall appearance. The core style is carried over from the “Burnt Tangerine” version of the Hydrium, with a raised Lacrima shape in the center, along with a raised minute track. However, on this new model, the dial is glossy white enamel, with crisp blue printing to represent the colors of Scotland’s flag. At the center of the dial sits a trio of genuine heat-blued hands. Isotope opts for batons for the hour and minute hands with an elongated teardrop-shaped seconds hand, and all three of the hands on the Isotope Hydrium Alba feature Super-LumiNova inserts to help offer increased visibility in the dark. Enamel dials and thermally-blued hands are typically features found on watches with rather refined and resplendent designs, and seeing them paired with a funky yet utilitarian micro-blasted steel case creates a striking and unusual contrast. This contrast is one that I personally think works incredibly well, due to the somewhat futuristic design of the dial and hands themselves. 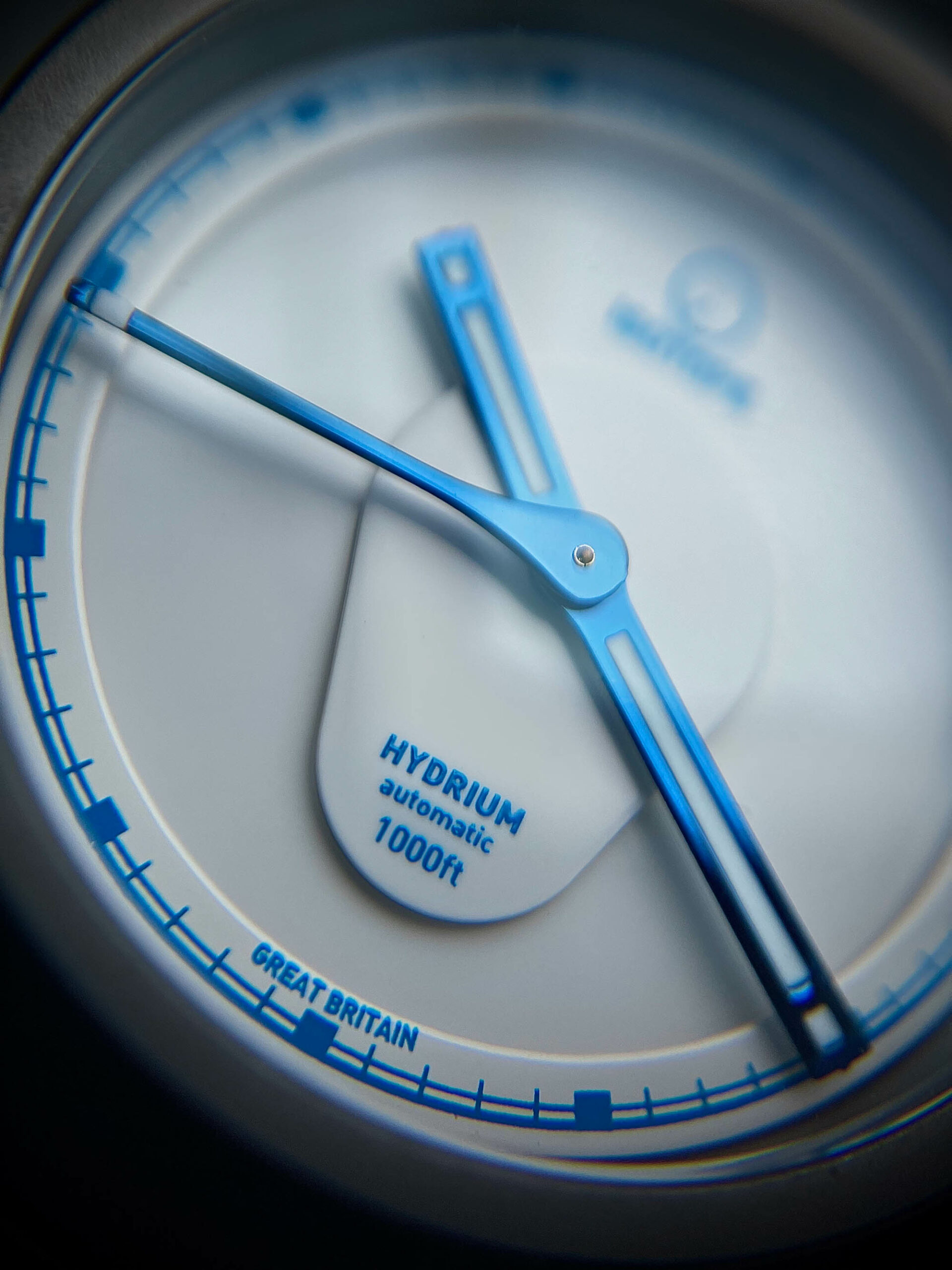 Powering the new Isotope x Scottish Watches Hydrium Alba is the same Swiss Landeron 24 automatic movement that can be found throughout the rest of the range. At its core, this Swiss-made mechanical caliber is the exact same as the popular ETA 2824 or Sellita SW200 movements that can be found in countless other watches, and it, therefore, runs at a frequency of 28,800vph (4 Hz) with a power reserve of approximately 40 hours. While you won’t be able to see it due to the Hydrium Alba’s solid caseback, the Swiss Landeron movement does offer more elaborate finishing than its more widely-used ETA/Sellita siblings. This includes perlage and Geneva stripes on the mainplate and bridges, along with blued screws and a rotor with Isotope’s Lacrima logo. Accuracy for the Landeron 24 is rated at -12/+12 seconds per day, although my personal experience with this movement from when I reviewed the HydriumX “The Judge” was that it ultimately performed noticeably better than its listed specifications during real-world use. Lastly, completing the new Isotope Hydrium Alba is a 22mm blue FKM rubber tropic-style strap with a chunky signed pin buckle made from micro-blasted stainless steel to match the case. 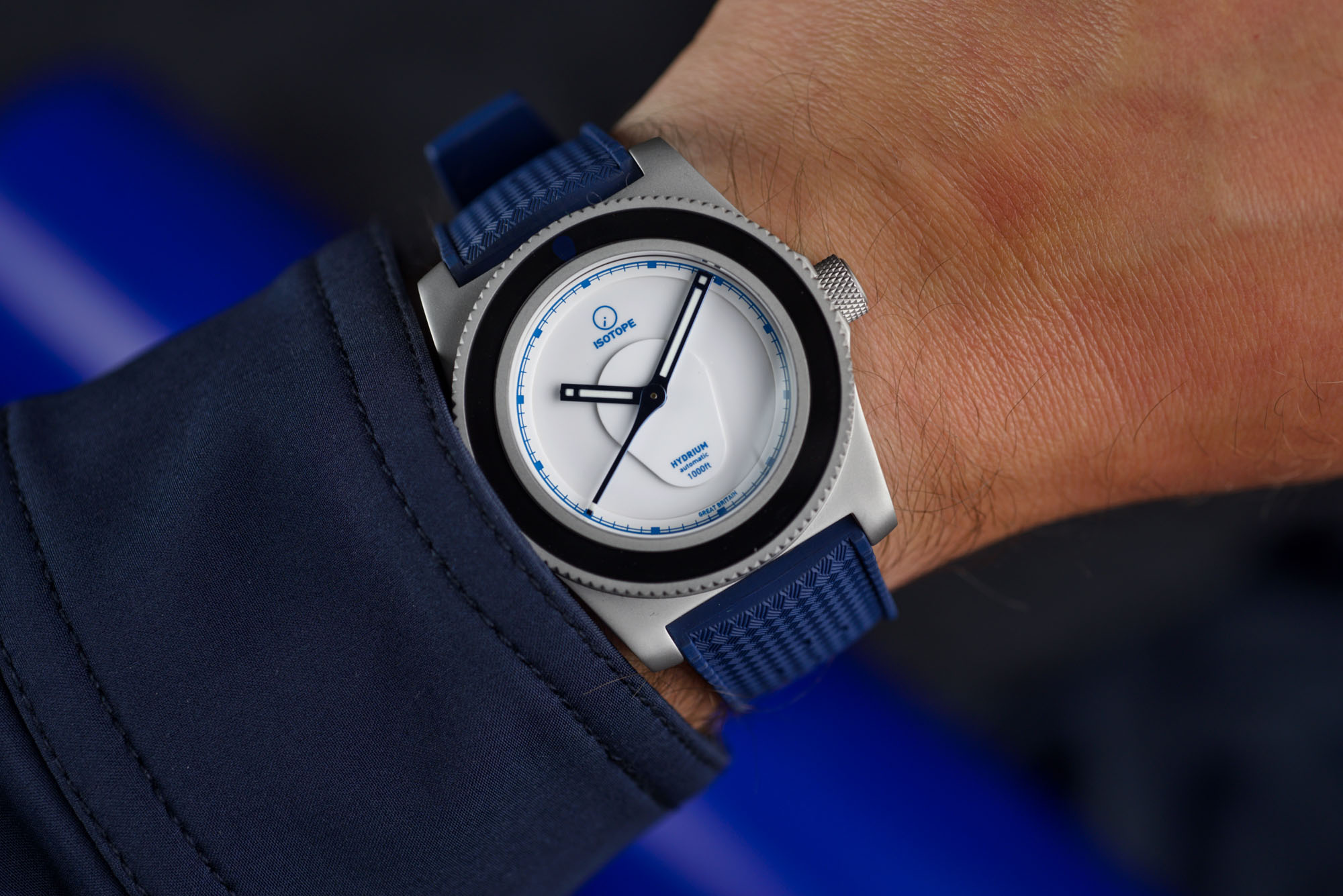 Just like nearly all of Isotope’s watches, the new Hydrium Alba will be produced as a limited edition of 100 pieces. Additionally, despite its use of an enamel dial and genuine thermally-blued hands, the new Isotope Hydrium Alba costs more-or-less the same as other Hydrium models, with a retail price of approximately $850 USD (at the time of writing). The actual official retail price is £700 GBP and this automatically gets converted to your specific domestic currency at the present-day exchange rate. This ultimately makes the new Hydrium Alba only £100 more expensive than the entry-level “Burnt Tangerine” model, and it costs the exact same price as “The Judge” from the HydriumX series. All things considered, the fact that you get a 100-piece limited edition dive watch with a 300-meter depth rating, a Swiss mechanical movement, a white enamel dial, and proper flame-blued hands — all for well-under $1k represents a fairly strong value proposition by today’s standards. Plus, I personally very much enjoy the novel concept of having a crisp white enamel dial and blued hands inside a chunky matte-finished dive watch case that you can take to the beach, and I can only imagine there will be a number of other collectors who will feel the same way. The Isotope x Scottish Watches Hydrium Alba is available for pre-order now, with delivery scheduled for the end of January 2023. For more information, please visit the brand’s website.