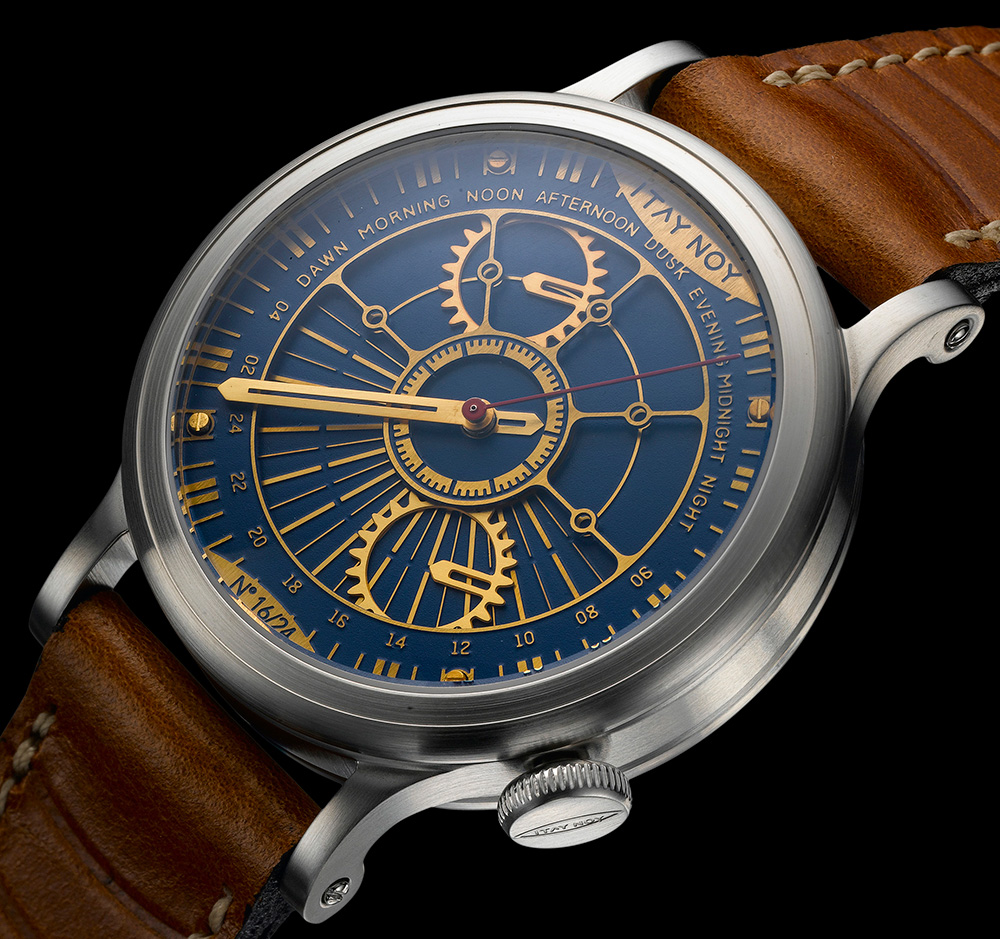 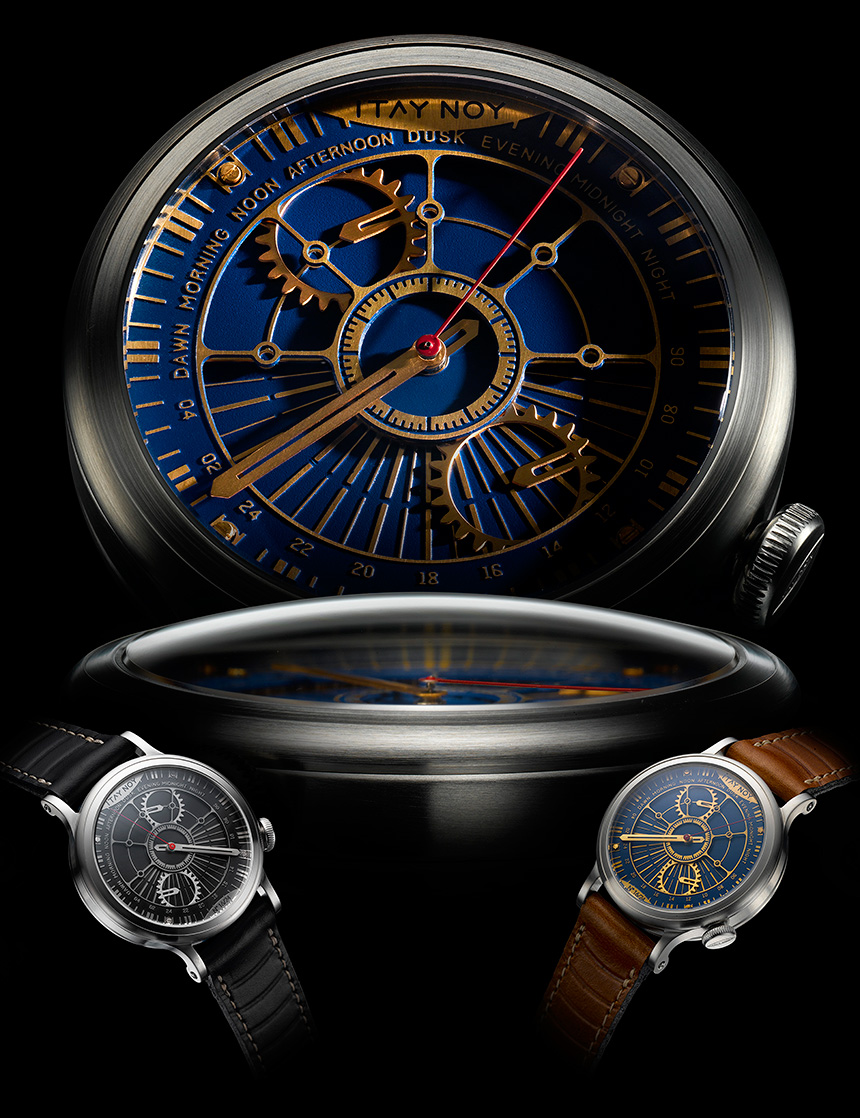 Being a watch nerd, I am in the habit of scanning people’s wrists everyday in the hope of discovering a new and exciting timepiece. From what I have experienced so far, one can easily come across anything ranging from a Seiko to a Rolex on a regular basis, but it is not often that one comes across an idiosyncratic timepiece like the Itay Noy Chrono Gears watch. This watch embodies a lot of distinctive elements, offering its users a unique perspective on timekeeping.

Itay Noy is an independent watch maker based out of Israel, and he has been creating unique, high-quality timepieces since the year 2000. It is spellbinding to see the amount of diversity that Itay showcases with every new watch he releases. One look at his watch catalog and you will see what I mean, and in case you find the information on his website to be sparse, don’t worry, we have covered a few interesting pieces such as the Itay Noy Part Time watch and Itay Noy X-ray watch for you on aBlogToWatch. 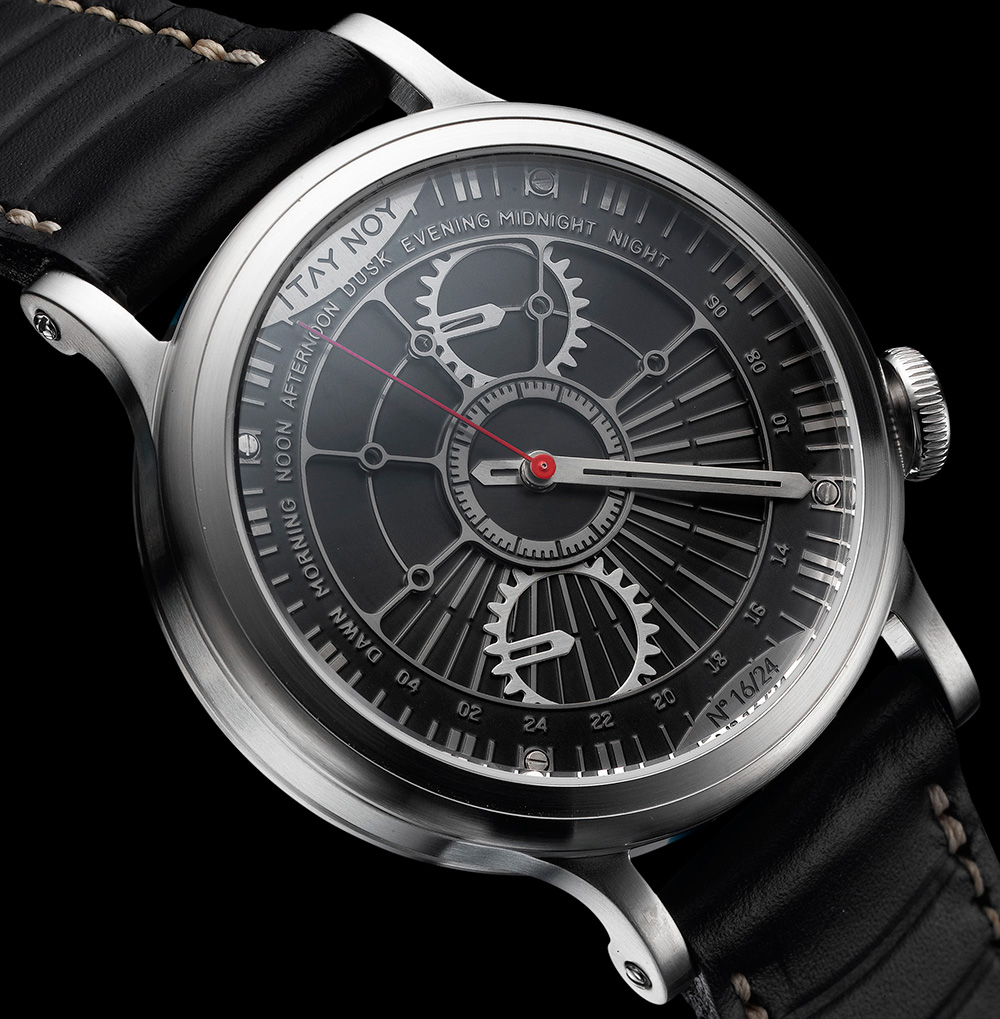 For 2016, Itay has added two new watches to his catalog, the first one being the Open Mind and the second one being the Chrono Gears watch, which is our point of focus in this article. As is the case with previously released Itay Noy watches, it is the dial on the Itay Noy Chrono Gears that steals the show. For the dial, Itay seems to have drawn some inspiration from the solar system, as the rotation of the two gear-shaped indicators around the central hour hand resembles the motion of planets around the sun.

The Itay Noy Chrono Gears watch is not a chronograph as it may first appear due to the gears which resemble subdials, but the two “gears” are in fact pointers that themselves rotate around the dial. With a long minute hand and what may be the shortest hour hand ever, the user can still read the time normally from the center of the dial. Seeing it in motion in the video below will help clarify how the dial module works, while also showing some of the watch’s production.

The dial of the Itay Noy Chrono Gears incorporates multiple layers, giving it a lot of depth and visual interest. So without further ado, let us take a brief look at what each layer on this dial has to offer. The upper layer of the dial comprises an applied minute track, a 24-hour semicircular scale at the bottom, and the eight phases of the day placed at the top. It is this layer of the dial which also connects the upper half of the dial containing the eight phases of the day with the centrally located hour ring. 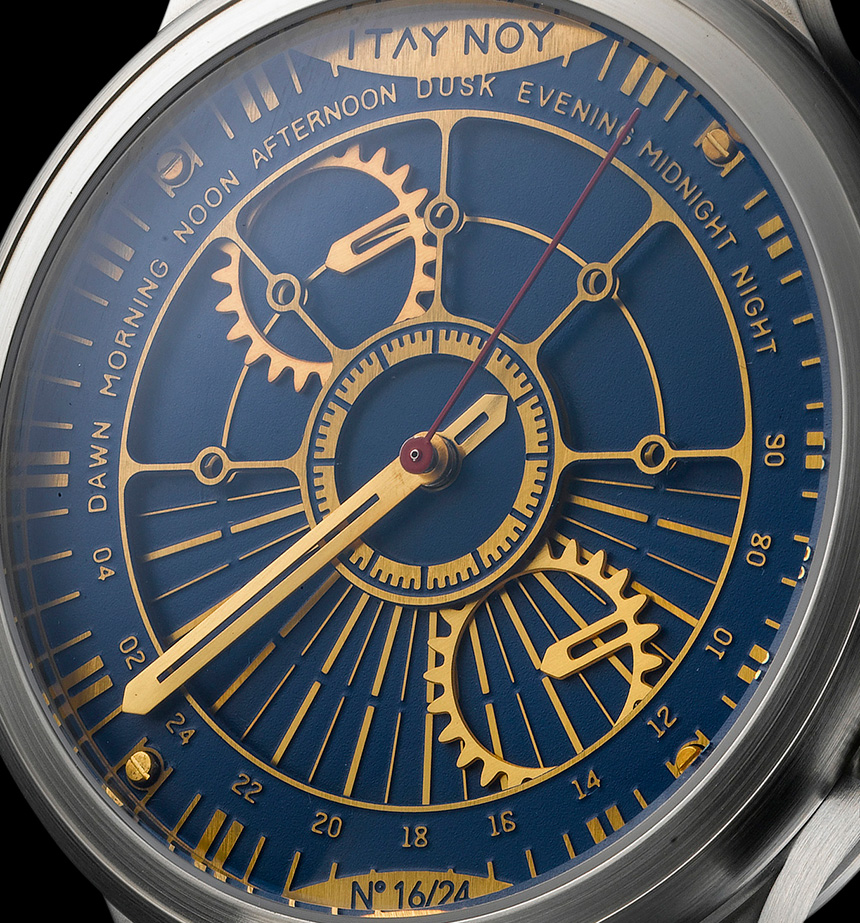 As the hour hand progresses further, the two gears also rotate in the clockwise direction with their pointers indicating the small circles on the upper half of the dial to show the phase of the day (morning, evening, etc.), and towards the applied bars in the lower half to display the 24-hour time. Itay Noy builds the gear module himself and calls the system “Dynamic Dial.”

A bold dial design like the Itay Noy Chrono Gears definitely wants to be seen, and hence has been fitted into an aptly sized 44mm brushed stainless steel case which is water resistant to 50m. Even though 44mm may seem like a bit of a stretch for a lot of people out there, Itay seems to have taken ergonomics into consideration by curving the lug downwards at a steep angle, and also rounding them off at the edges to provide a snug fit on the wrist. 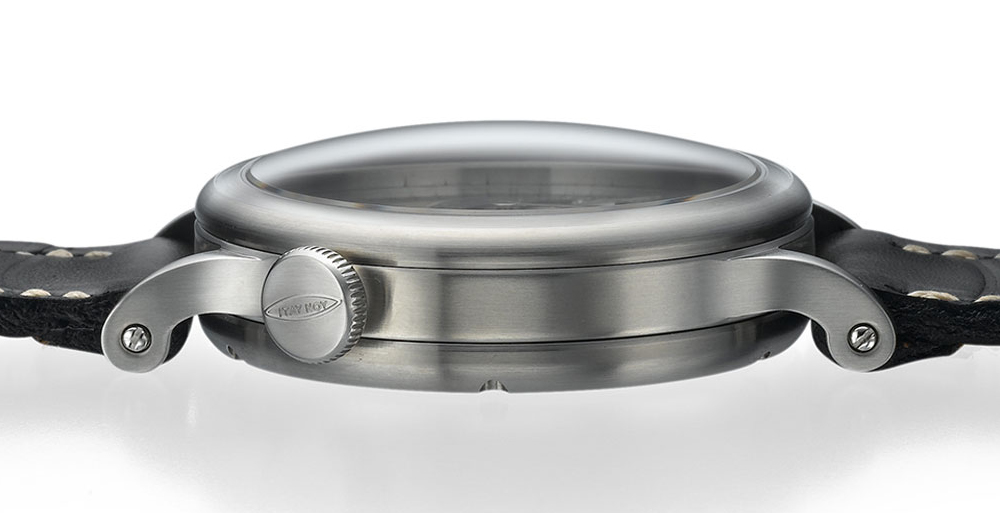 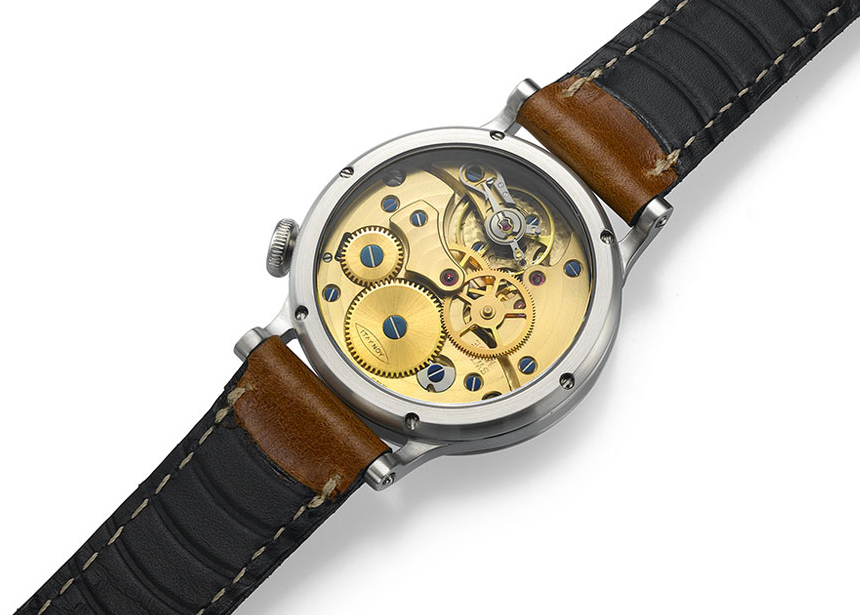 Powering the Itay Noy Chrono Gears is a 20-jewel Swiss Isoprog 13 movement modified especially for this watch, and it can be viewed through the transparent case back. The hand-wound movement features hacking seconds and can be wound using the offset signed crown at the 4 o’clock position. The movement beats at a respectable 21,600bph and has a power reserve of 42 hours. 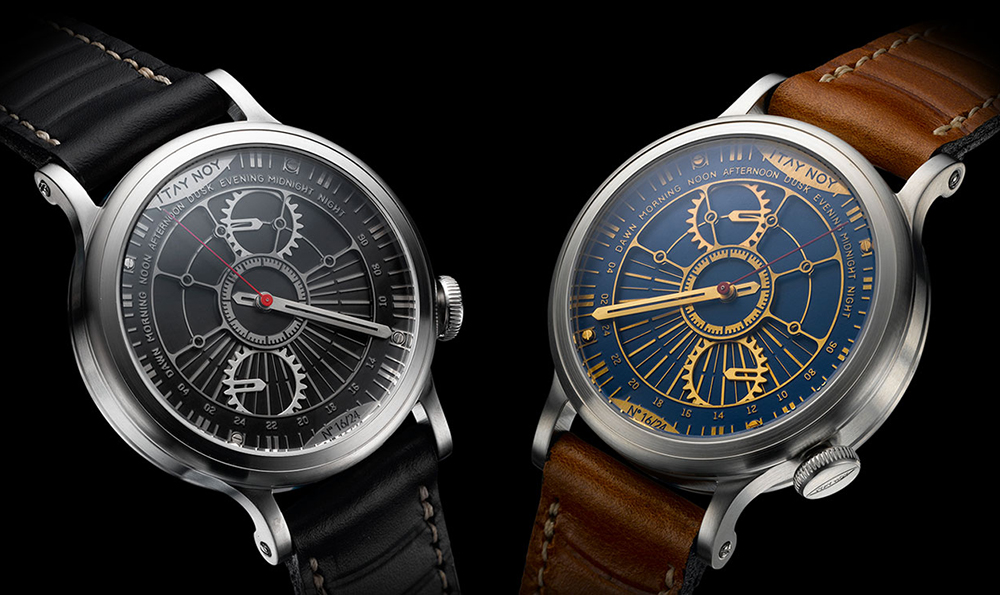 Finally, I would like to conclude by saying that though the Itay Noy Chrono Gears might not be everyone’s cup of tea, it is definitely an innovative timepiece bringing forth fun and interesting ways of looking at time. The Itay Noy Chrono Gears is available in either a blue or a black dial, along with a complementing hand-stitched brown or black leather strap. The watch is limited to a run of 24 pieces in each dial color, and can be purchased at a price of US$5,800 either through Itay Noy’s website or from authorized retailers. itay-noy.com