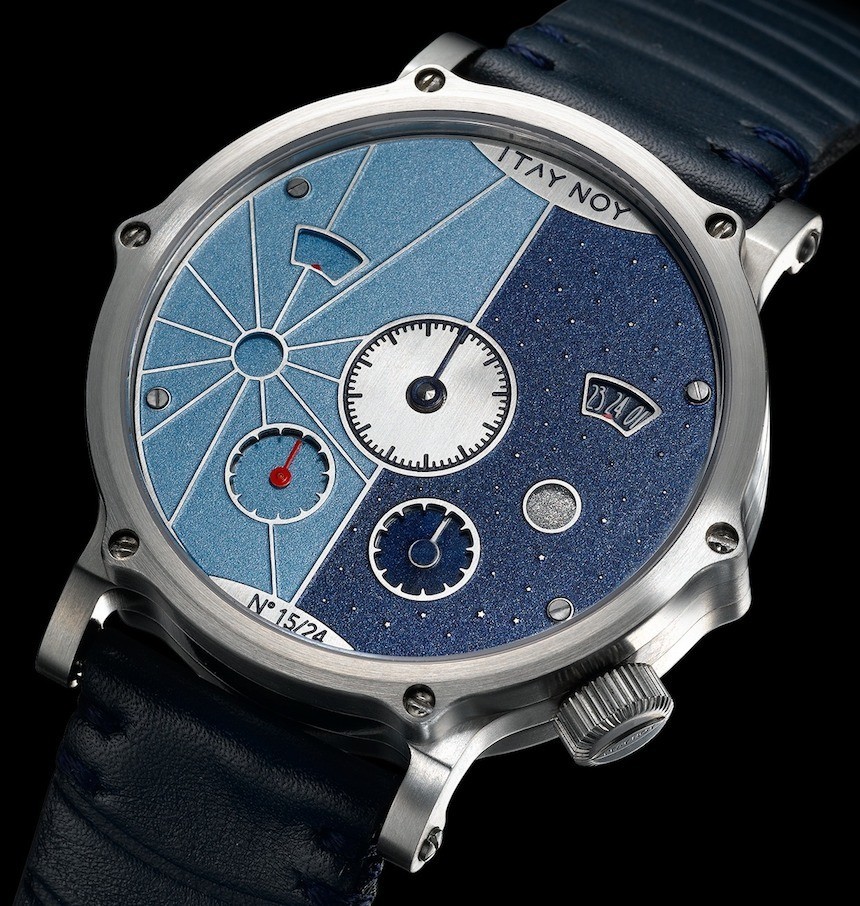 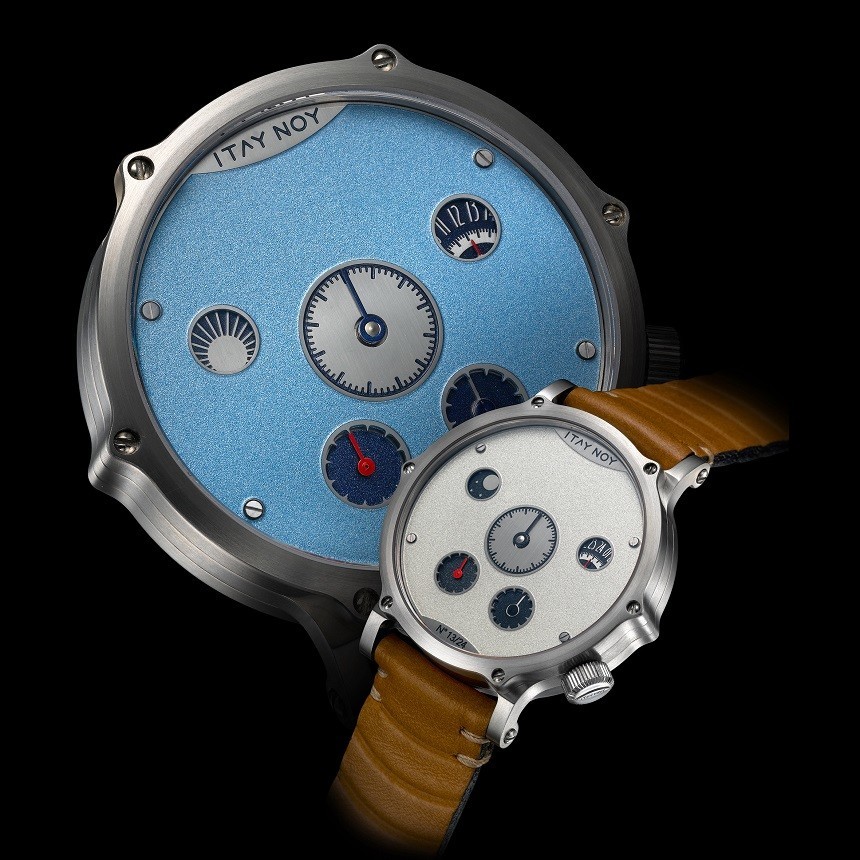 In a studio in Tel-Aviv, the creative mind of Itay Noy conceives made-to-order timepieces that are sure to catch the eye. His latest offering – displayed at Baselworld 2015 – is the Itay Noy Part Time. Available in four color schemes, limited to 24 pieces each, the concept of the Itay Noy Part Time is simple: the dial is divided into two parts, one for the day, one for the night. When the day side is active (from 6am-6pm) the night side sleeps and vice versa. The temporal segments are split by a vertical line, running from 12 to 6 o’clock. At the very bottom of the dial, the series number is engraved and, at the very top, Itay Noy’s name decorates the dial in his distinctive personal font. 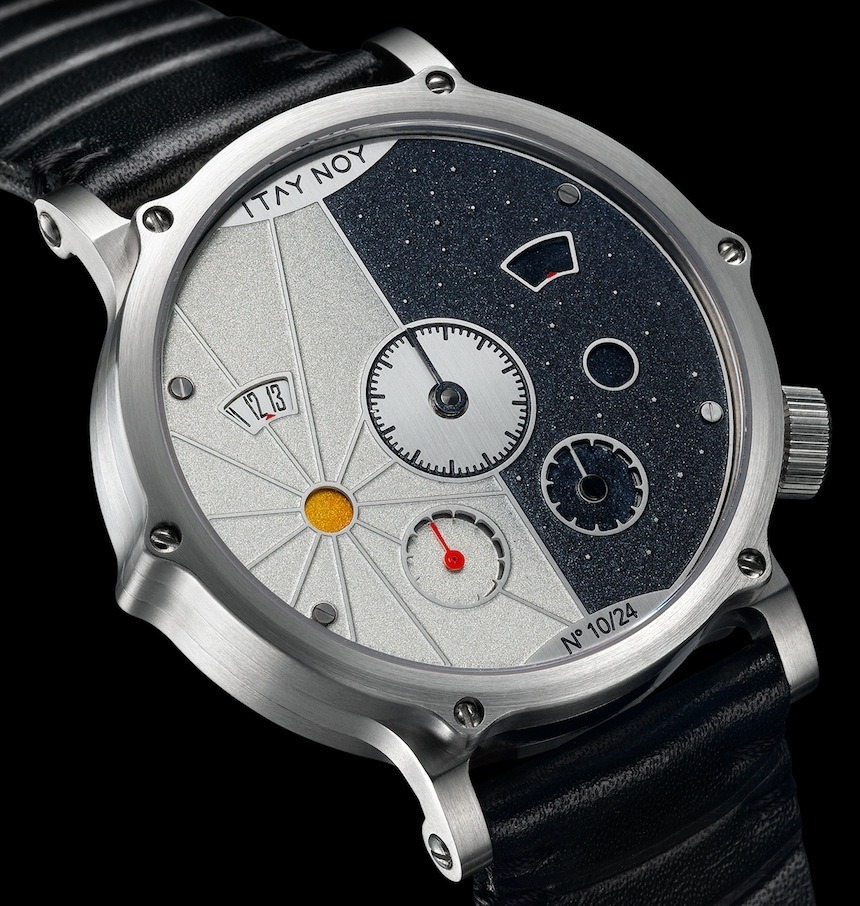 There are two separate designs, each with two color options. I think the most striking of the two is the “day and night” dial, which has a sun motif on the left and a moon and stars scene on the right. It’s certainly unique how the ‘active’ portion of the dial is indicated by either the sun or moon coming to life, but is, in my opinion, a little basic. Both circular apertures reveal a colored disc when it is their turn to tell the time: the sun becomes yellow; the moon becomes white. As effective as this is, it is hardly going to set the horological world alight. Sure, it’s different to have effectively two dials each doing half the job of a normal dial, but the question is “why bother?” 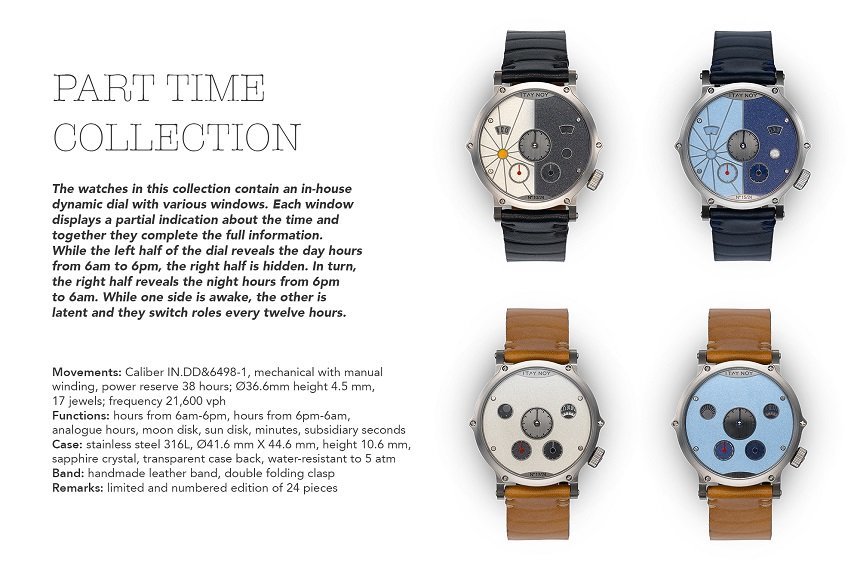 In this case, the answer seems to be “because it can be done, so shall we do it!” Truth be told, a little whimsy now and then does no one any harm. My only concern is that this watch does not do enough in the areas it could to be considered a success. There are several unique elements about this watch: The case, the dial aesthetic, the mode of time display, the modified base calibre, and the strap. There are merits and demerits to each USP, but I’d argue that the latter slightly outweighs the former. And here’s why…

The case does one thing well: It creates an identifiable silhouette. So when blacked-out, this 44.6mm behemoth might look okay. But when you shine the light on the details, you might be less impressed. The case is built in three layers, stacked atop one another like a Victoria Sponge cake. These layers are held together by some pretty weak-looking screws that I’m not sure I’d trust. On the plus side, this is nice and balanced, with each segment the same thickness. However, the lugs, which extend directly from the middle tier, are consequently petite.

That said, the lugs may save themselves from ridicule on two fronts. Firstly, they are built to take a screw bar as opposed to a spring bar. This is something that pleases me, especially when such an enormous case is in play. Secondly, the lugs are quite pleasantly shaped and ergonomically contoured, and do a good job of keeping the 44.6mm housing as small as possible on the wrist. My favorite style and color scheme is undoubtedly the Itay Noy Part Time-DN.BK. On this watch in particular, the lugs look good, because the grayness of the dial softens the whole relationship between the face and the case. The lugs, as a result, seem to blend into the dial and create a clean and natural continuation from display to wrist. 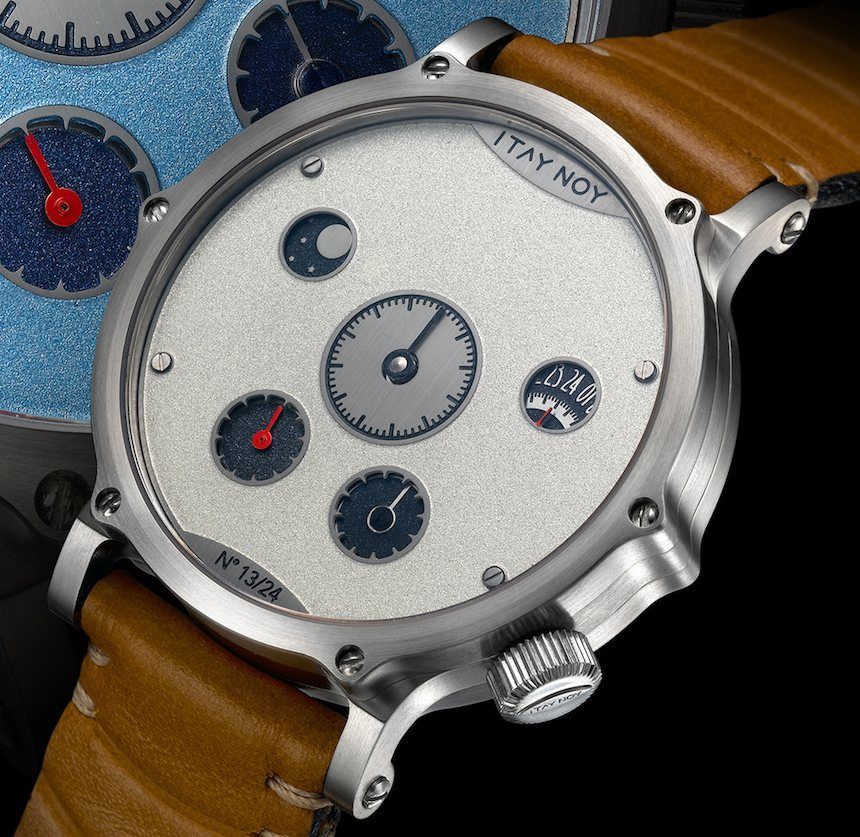 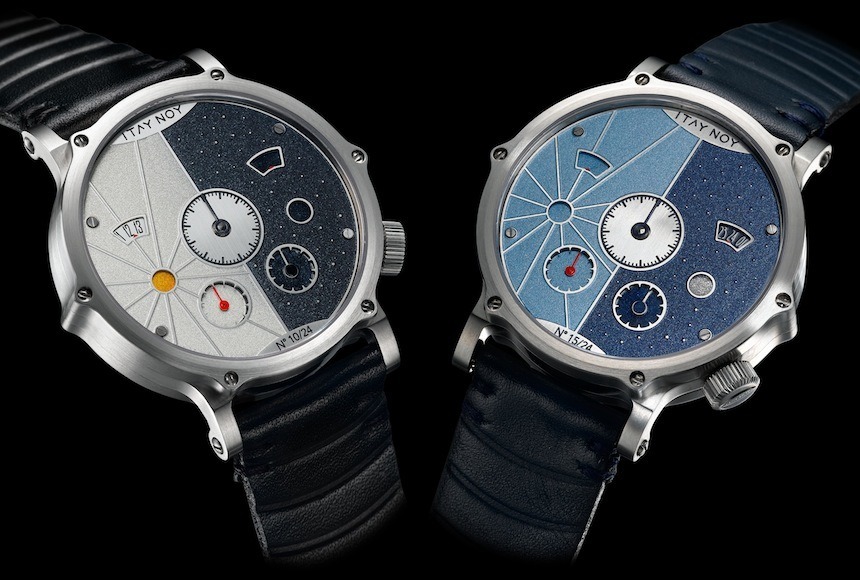 Cutting to the chase here, let’s look take a closer look at the unique dial designs of the Itay Noy Part Time. Because of the basic concept, the time display does seem a bit disjointed – reading the time at a glance is not as easy as in the case of some other proprietary dial designs, but then again, because there are no overlapping indications, overall legibility is not too bad either. The bottom right sub-dial around the 5 o’clock position is the hour indicator. The centrally-mounted hand is the minute hand. The bottom left sub-dial around 7 o’clock is the seconds indicator. The apertures above the sun and the moon indicators are ’12 hour indicator dials’. Only one of these 12 hour indicators operates at a time. It is exactly the same concept as a 24 hour dial, but split over two half dials. As the daylight hours progress, the sun rises from the left and sets to the right. When the day-time 12 hour indicator reaches 18:00, the night-time counterpart takes over and the moon begins its transit. If you want a visual of all this in play, check out this video here.

The watch features the IN.DD&6498-1 movement, which boasts a 38 hour power reserve, 21,600bph and 17 jewels. If those specifications sound familiar, that’s because you might have seen them attached to an ETA 6497/8. The calibre in the Itay Noy Part Time is a modified tractor movement, so tough and robust it could punch its way through a wall. I love the 6497/8 as a base, and love the fact Itay Noy has actually done a bit of proper watchmaking in the creation of this quirky timepiece. Plaudits to him for this effort. In this category, it is hard to gripe with the execution of an idea within his reach. I mean, the complication works, so it can’t be totally lambasted, but it is not dynamic enough to delight, nor clever enough to inspire. It feels more like an exercise well completed than the final realization of a jaw-dropping conception.

Lastly I come to the leather strap. This is a really nicely made thing, with a real sense of craftsmanship in the design. I don’t know if I would wear it myself on aesthetics alone, but as a fan of trade skills, I think I could see something like this on my wrist. 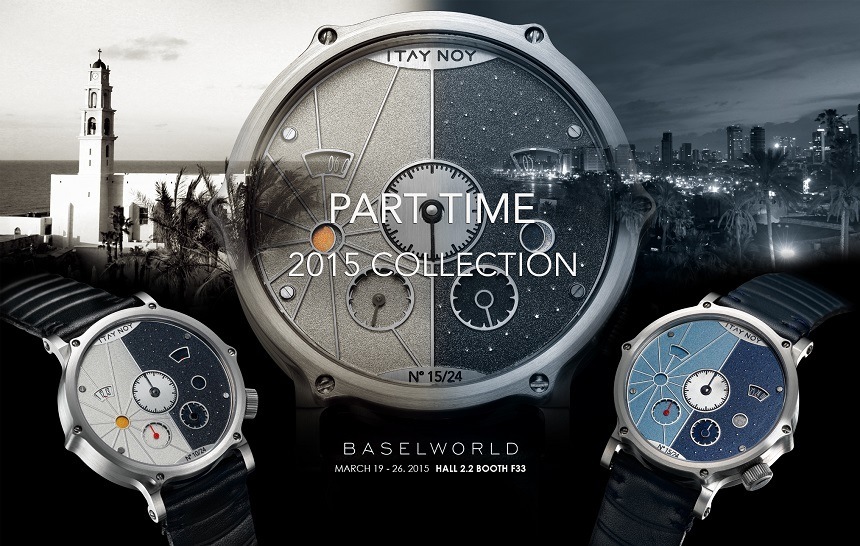 Itay Noy is an independent brand for people who like to make a statement, for those who enjoy the bizarre and fanciful, and for people who believe in supporting skilled artisans and their work. The Itay Noy Part Time is a polarizing watch, with a host of contentious design elements that will pay back your monetary investment in conversation topics.