IWC Gets Bored; Rebrands A Top Gun Automatic Chronograph Watch To A Limited Edition For the German National Football Team 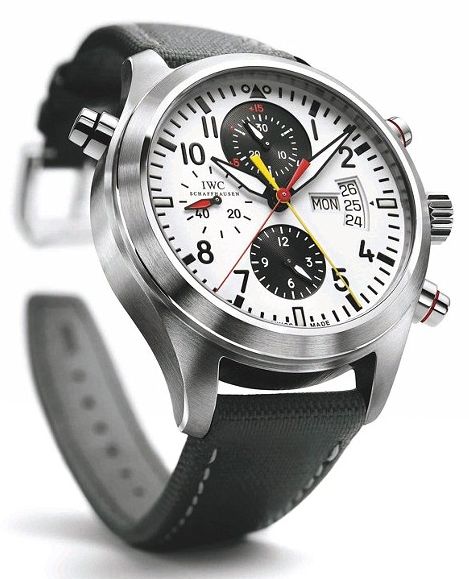 Lets not use the term recycling, but that is pretty much what IWC is doing right here. But this happens a lot, and if there was a watch to release, this would be the one. The IWC Pilots Watch  Chronograph Automatic Top Gun Edition was a really nice, and really desirable watch. Forget the movie tie in for a moment, and look at its handsome instrumental good looks, nice color contrast, and complex functions with the double chronograph. Apparently it did not matter to IWC that Top Gun actually game over 20 years prior to releasing the watch, there could be NO OTHER military plane related movie that would suffice. It was, and still is a very nice watch, and the world is ready for some derivatives!

Well, the IWC Ref. IW371803 is a newish version of the IWC Top Gun. Its actually not fair to call it an exact copy. It does not share the titanium and ceramic case, but rather has a steel case. The most notable change is the dial colors, which are more exciting this time and probably relate to the German Football (yea, Soccer) team’s color. Such colors, which also resemble the German flag colors (red, black, and gold). Thank you Switzerland for sharing in the proud German nationalism that German watch brands often display. 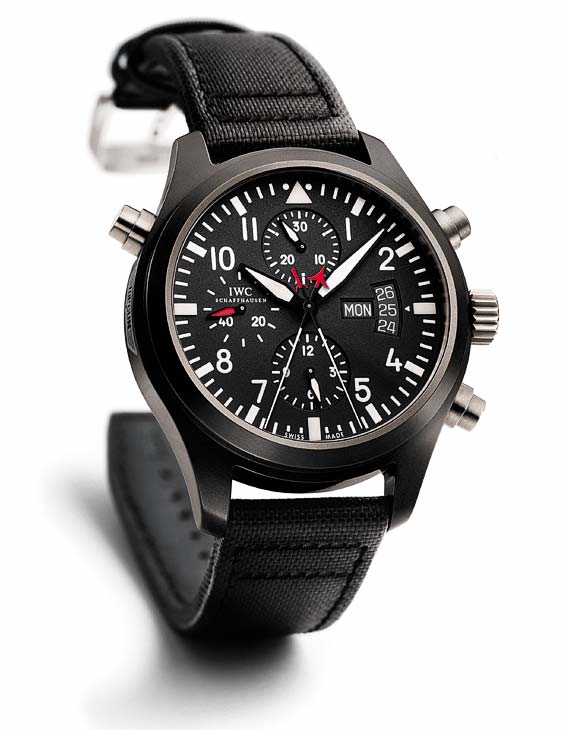 There is also another different on the dial, which is another set of number around the upper subdial window. Here you have little 15 minute indicators of the periods in the game. Actually, I don’t really expect any soccer players to wear this watch while playing. That would really get in the way. Maybe a coach or some uber-fan will be wearing this watch to time the game.

Inside the watch is the automatic IWC caliber 7923 movement that has a striking similarity to the Valjoux 7750! IWC has opened up the window dial (as in the Top Gun) over the date to show three days. I know that this is done for visual symmetry, but it is a trend that annoys me frankly. Not that much though. The color scheme on this watch and the steel case material is enough to refresh the look of this watch, and makes it cool all over again. The original Top Gun version retailed for over $10,000, which was rather steep. However, the IWC German National Football Team Chronograph Edition watch will likely come in much cheaper due to the lack of ceramic and titanium case materials. Look this lovely 44mm wide IWC watch soon, where ever expensive watches are sold!