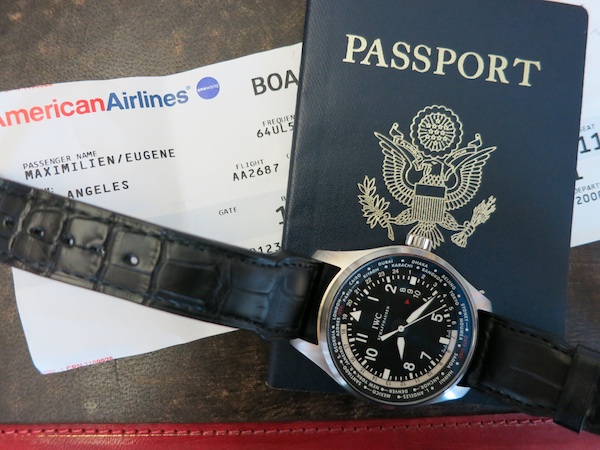 IWC likes to focus each year on one of its watch families. While we now know that 2013 is the year of the Ingénieur, with various models already announced, last year was the year of the Pilot.  With that came various small changes and updates to its iconic Big Pilot, Mark XVII, Top Gun, and Spitfire series, as well as a new perpetual calendar Big Pilot with ceramic case, and a new Pilot Chronograph that includes a newly developed in-house chronograph movement.  What may have been lost to some was the introduction of a brand new IWC Pilot Worldtimer that inherits many of the characteristic style and design of the IWC pilot line. However, as the name suggests, this new model adds an interesting world time complication which is especially useful to those, like me, working with a global team of developers on projects with tight schedules requiring frequent phone calls as well as managing tasks and deadlines that all need to be synchronized…

IWC is only recently becoming a mainstream brand in the United States, though in Europe and parts of Asia it is well known already.  This is a bit of a shame since, as you will hear from any knowledgeable authorized dealer (AD) or at IWC’s fabulous boutiques (e.g., the one in Bal Harbour, FL), it’s the only historical Swiss watch company whose founder was an American.  The brand was founded by a businessman and watchmaker from Boston, Florentine Ariosto Jones in 1868.  In his quest to setup a large manufacture of fine timepieces targeting the burgeoning US market, Jones ended up in Schaffhausen, a town in the north eastern part of Switzerland, it is there he founded the International Watch Co. manufacture, and where it has remained ever since.

In the mid 1930s, IWC cemented perhaps what is its most iconic lineup, the pilot watch family.  The resulting pilot design language is often imitated but is rarely duplicated.  As I mentioned, the brand is having a resurgence in the US and positioning itself as a serious contender to the other more common Haute Horlogerie brands with unique designs and movements such as the perpetual calendar in the new Big Pilot and in its Portuguese lines.  However, since the Portuguese perpetual calendar is currently beyond my means and is on my grail list, I want to review the new Worldtimer, which has been part of my weekly work rotation for the past six months or so. 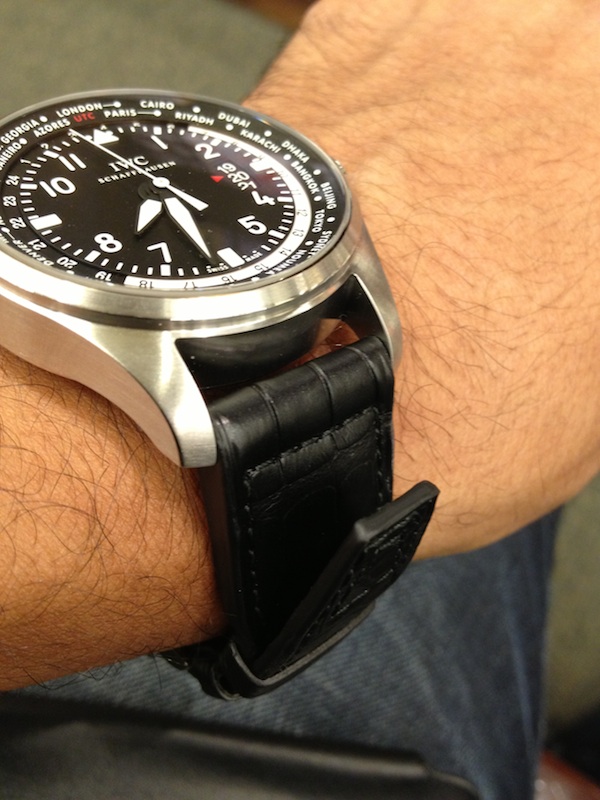 The most striking aspect of the IWC Worldtimer is the dial.  It is based on the classic IWC pilot dial design and has the same black background as found on the other IWC pilot watches with the same font and hour markers configuration. Essentially, it includes large legible white Arabic numeral markers for all hours except 12, 3, 6, and 9.  In the missing hours locations you get a large markers filled with lume.  At 12 o’clock, like for the other IWC pilot watches, you have the triangle (pointing up) with two dots on each side showing the minute before and after twelve.  The triangle is also filled with Super-LumiNova and shines nicely with a charge.  It’s not the most legible watch at night but the amazing contrast of the white markers on the black dial makes for a very legible watch in the day or with some minor light.

Also, like the other IWC pilot watches, the Worldtimer includes the same hour and minute hands which are sword shaped and filled with lume.  The hands respectively and perfectly hit the hour and the minutes markers making for a quick and accurate reading of the current time.  The seconds hand is thin and has the same length as the minutes hand but unlike the hour and minute hands whose periphery are black to better contrast with the white markers, the seconds hand is all white.  This works well to help contrast it with the minute hand when it’s near it or right above it.  The flat sapphire crystal with good anti-reflective treatment also help with the dial’s legibility and overall instrument appearance.  These attention to details is why IWC owns the pilot watch market and regularly releases new models that go on to define the category. 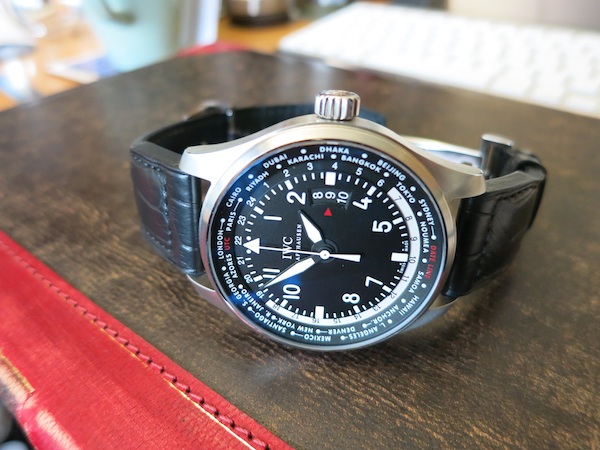 Similar to the new Mark XVII and the new Pilot Chronograph, the IWC Worldtimer includes a cutout date that shows three date digits at a time.  IWC claims that this is done as a reminder of the altimeter instrument gauge on an airplane.  Sure, but since we can only be in one date at a time, and the date jumps, this cutout is done mostly for show, though on the Worldtimer it’s somewhat useful when changing the hour and crossing the date line…

Now to what is unique to the Worldtimer versus the other pilot models in IWC’s lineup: a rotatable 24 hours ring that is half colored in white with black markers and in black with white markers.  Around the dial’s periphery is another ring (fixed) with 24 cities plus UTC (top) and the Date Line (bottom), both in red, showing 24 timezones around the world.  Since the hour ring rotates, the time can be read in all 24 timezones at once.  The white part of the ring indicates daytime, whereas the black tells you that it’s nighttime.  The way to read the time for (almost) anywhere in the world is to find the city on the ring that is closest to it and read the time for that city.  So for instance, the time in Silicon Valley or for San Francisco can be read from the Los Angeles city marker.  You simply read the hour from the rotating hour ring that is closest to the center of the Los Angeles marking on the city ring.  This works for most cities in the world, excepting those with 1/2 hour timezones, e.g., Caracas and New Delhi. 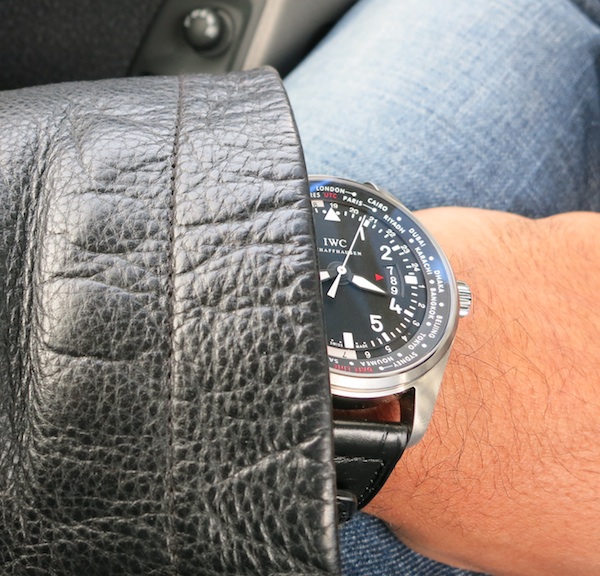 Since many cities (not all) participate in daylight saving times, some of the cities on the ring include a line and dot (colored white) for DST.  Instead of reading the time matching the hour nearest to the center of that city, you instead follow the line to the dot and read the hour closest to that dot.  Such is the case for London, Paris, Los Angeles, New York, and others, but is not the case for Beijing which, as well as the rest of China, does participate in DST time changes.  The whole thing works simply and accurately.  I have not had any issues in six months and that included a time change in the fall.

To support this terrific dial layout, the IWC Worldtimer uses a modified ETA base movement with an IWC in-house module for the world time complication.  The result is reference IW326201 which is not visible from the solid caseback.  This is done in most of IWC’s pilot watches whose case engineering includes special protection for drops in pressure, common when piloting smaller airplanes, though I expect that it’s a feature that most folks won’t have to use…  Besides being very accurate, losing about +/- 2 seconds as I used it daily the week I wrote this review, another great aspect to this movement is how it works.  Essentially, after unscrewing the non-protected crown and pulling it to position one, the hour hand can move in jumping fashion forward and backward.  This changes the date (forward and backward) as well.  The movement does not stop and the 24 hours ring is not affected.

Pulling the crown to position two, the movement and seconds hand stop and the minutes can now change.  Also, in this position, rotating the minutes a full circle will also gradually move the world time hour ring, this allows you to set the correct time for a reference city, say Los Angeles in my case.  Once set, you never really need to change the hour ring since any hour change can be done directly with the hour hands with the crown in position one.  Of course, this assumes you keep the watch running all the time by wearing it or using a winder.  The power reserve for the IWC Worldtimer is listed at 42 hours which I can easily attest to and its water resistant rating is at 6 bar (50m or 160 feet). 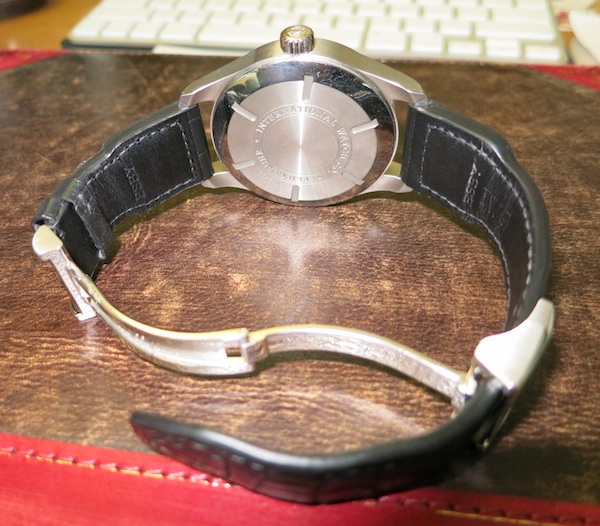 The case is brushed stainless steel and measures 45mm with lug-to-lug measurement coming at a hefty 55mm.  The result is that the watch wears big and in my case is just the limit of what I think my almost 7 1/2 inch wrist can comfortably support.  A millimeter longer and the lugs would drop past my wrist and likely start looking comical.  The Worldtimer comes with the classic IWC pilot black alligator strap with deployment clasp with brushed buckle.  The deployment clasp can be easily adjusted and closes with a satisfying click after securing the extra part of the strap with the two keepers.  While the leather is of high quality, I found it to be a bit hard and inflexible at first.  After wearing it for a few weeks straight, it definitely became more supple and now my comfort level wearing it is slowly approaching that of my other watches.  This is especially true since it’s not terribly heavy at 140 grams. 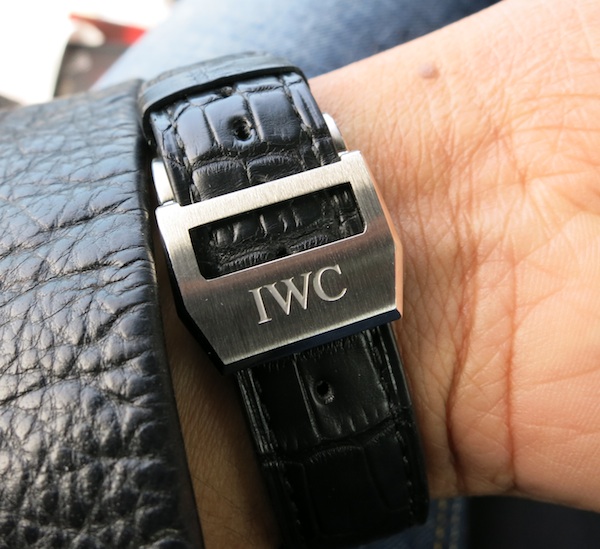 The IWC Worldtimer reference 3262 is not limited and is available from the IWC boutiques and ADs for $9,650.  There are no other models or options for the Worldtimer, though many other models from the IWC pilot family are readily available.  And, other than the perpetual calendar IWC pilot watches, none in my view, has a more useful complication than the Worldtimer.  This is especially the case if you frequently travel internationally or work with a global team like I do.  While not cheap for a non-fully in-house model, it is easily one of the most affordable world timers on the market today that also includes a unique style and from a manufacturer with real pedigree in the space of pilot watches. iwc.com 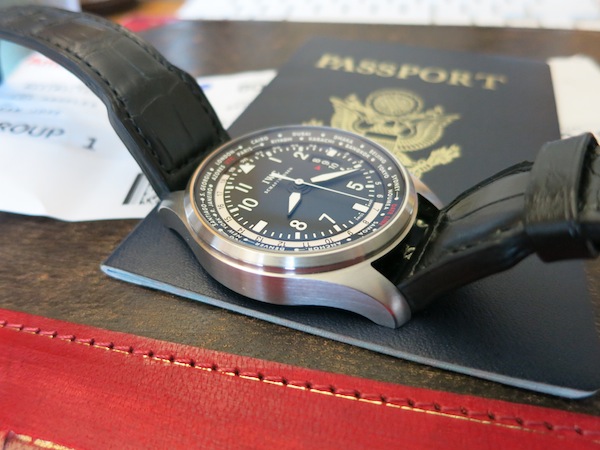 Necessary Data
>Brand: IWC
>Model: Worldtimer ref. 3262
>Price: $9,650
>Size: 45mm x 13.5mm (55mm lug to lug)
>Weight: 140g
>Would reviewer personally wear it: Yes
>Friend we’d recommend it to first: any jet setter friend or anyone working with a global team.
>Worst characteristic of watch: for the price this should include a fully in-house movement from IWC, though as I said, the accuracy of the IW326201 is excellent.  This means that IWC likely sources the best ETA ébauches and modifies them to their highest standards.
>Best characteristic of watch: the terrific legible pilot-style dial with world time ring.