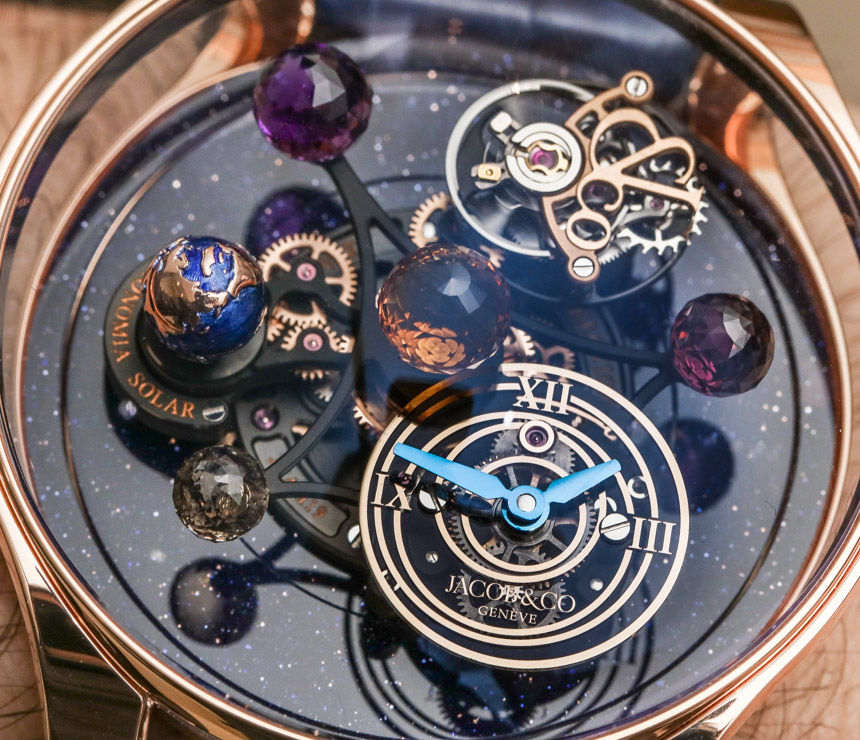 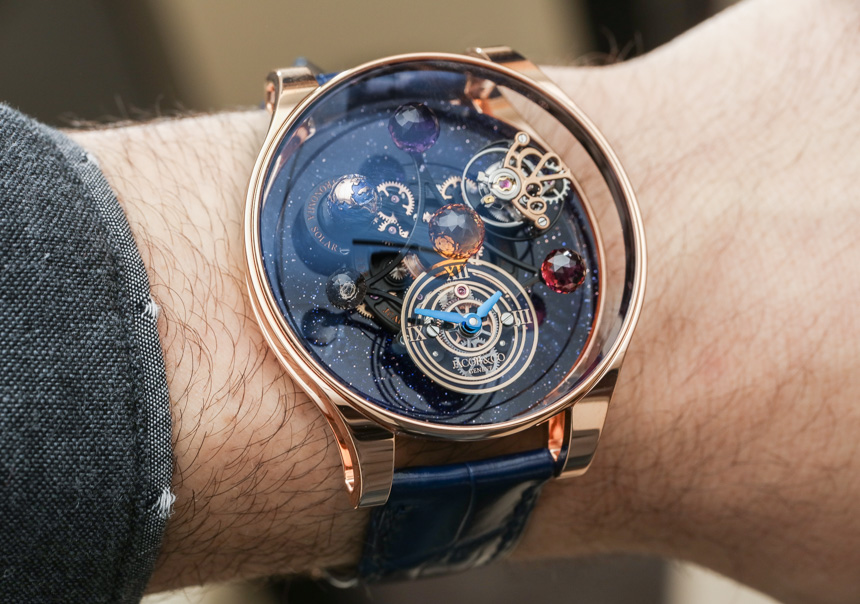 Some people probably don’t immediately associate Jacob & Co. with haute horology, but that doesn’t change the fact that the brand is responsible for some of the most outrageous, boldest, and indeed priciest, watches that you can buy today. Just take a look at their Grand Complication Masterpieces and you can find out-of-this-world watches like the Twin Turbo Twin Triple Axis Tourbillon Minute Repeater and the Epic SF24 Flying Tourbillon. However, the mainstay of Jacob & Co.’s Grand Complication Masterpieces has got to be the Astronomia, which has since spawned many different versions like the Clarity & Black watches. The latest one is called the Jacob & Co. Astronomia Solar which we’ll look at today. 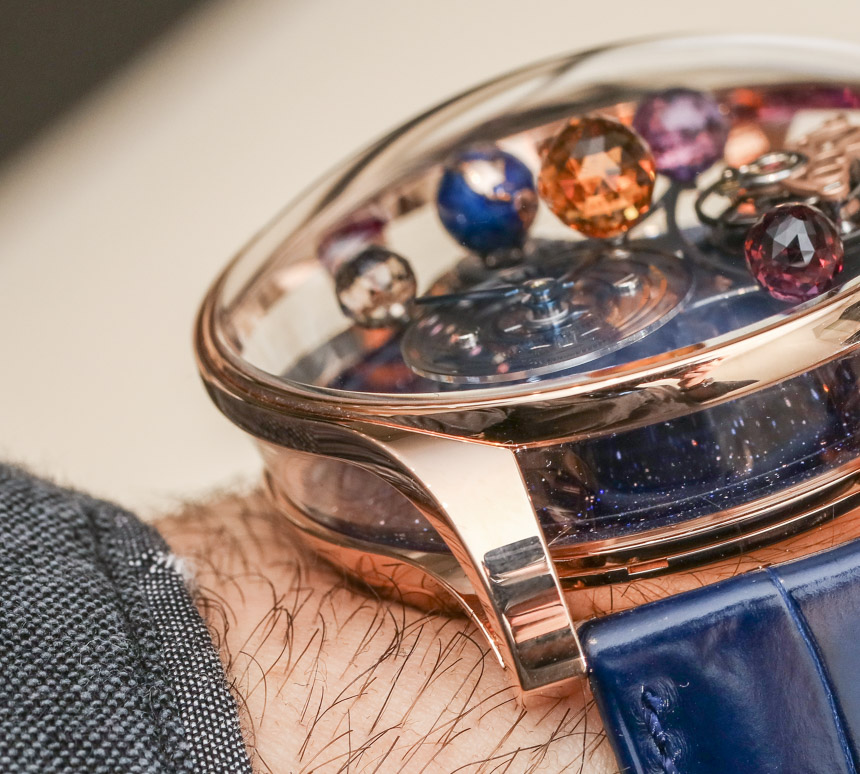 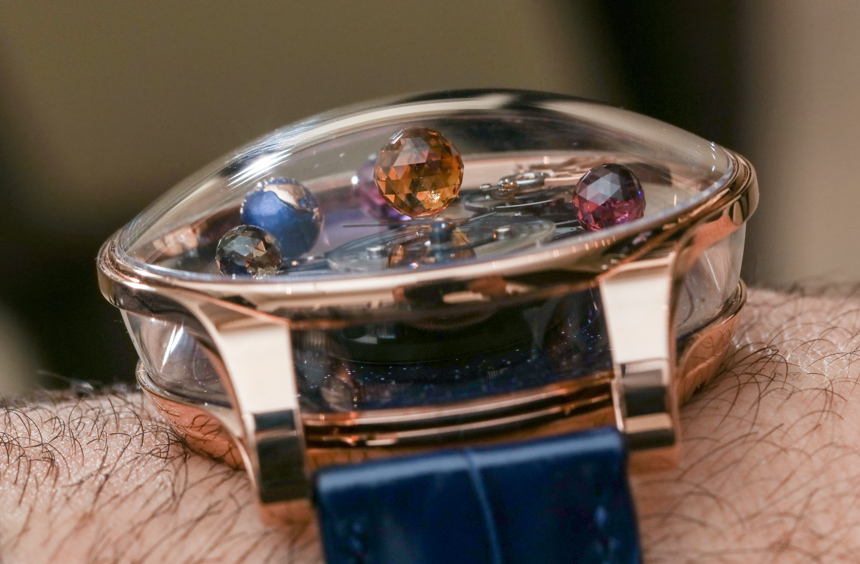 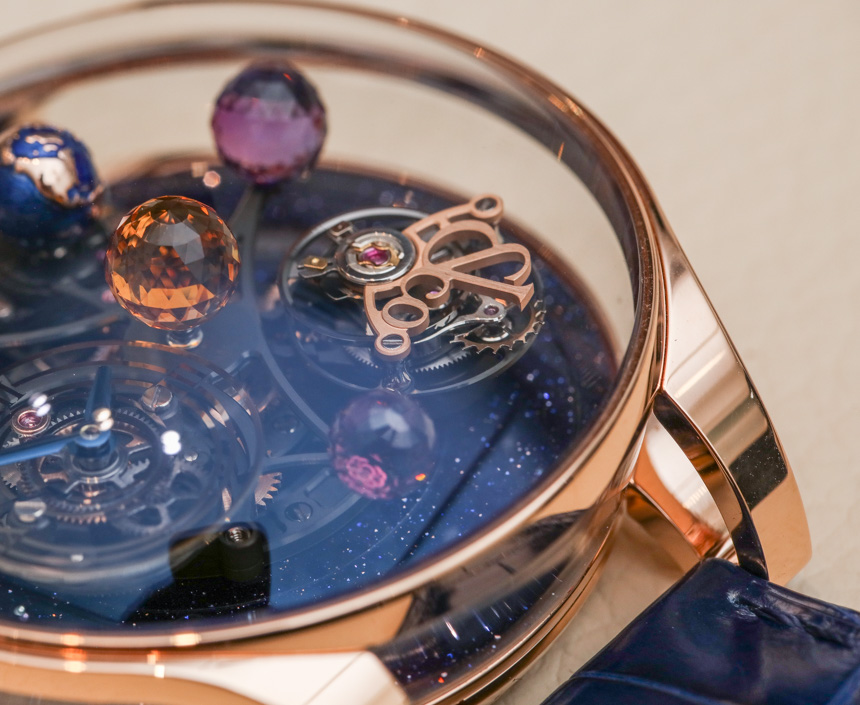 The case design remains largely the same. 18k rose gold is used to form a rough outline and the spaces in between are filled with sapphire to give owners an unobstructed view of the movement within. Case diameter of the Jacob & Co. Astronomia Solar is 44.5mm, which makes it a little smaller than other Astronomia watches. Case thickness is 21mm, yeah, that’s not a typo. That’s because the case itself has to be quite big to accommodate the fantastic three-dimensional movement, plus it has a wildly domed sapphire crystal. So, the Astronomia Solar, like other Astronomia watches, is really thick. Don’t expect it to slip under a shirt sleeve, and rest assured that everyone will notice it on your wrist – but of course, you already knew that. 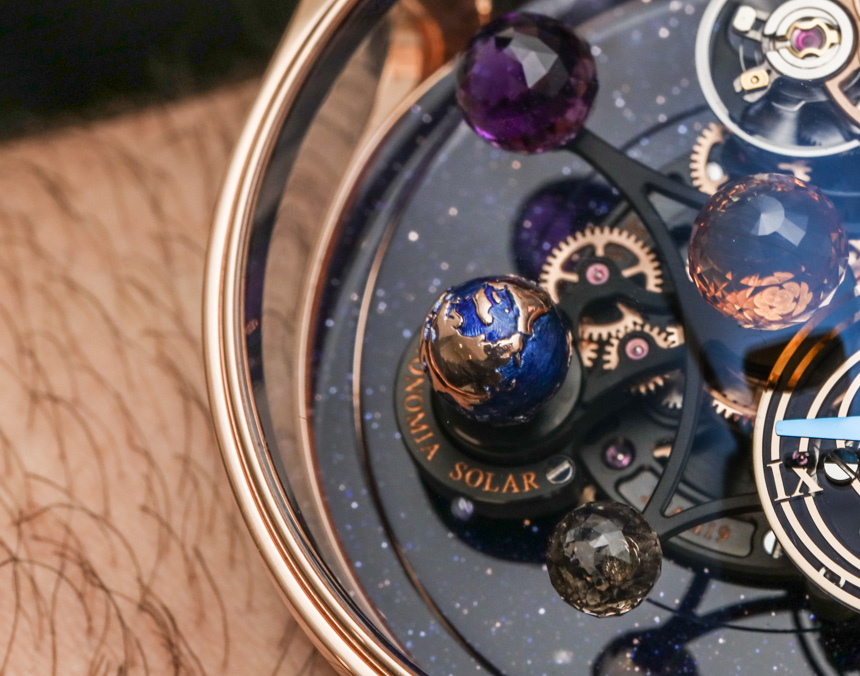 Water resistance is just 30m, which is understandable for a watch of its complexity. Moving on, one thing some might notice is that there is no visible crown. Well, setting the time and winding the movement is actually done using two fold-out 18k rose gold “bows” on the case back. Unfortunately, we didn’t get to take photos of the case back but it is similar to the system you’ll find in some previous Astronomia iterations. Of course, the eye is going to be drawn to the whimsical and elaborate world created within the dial. 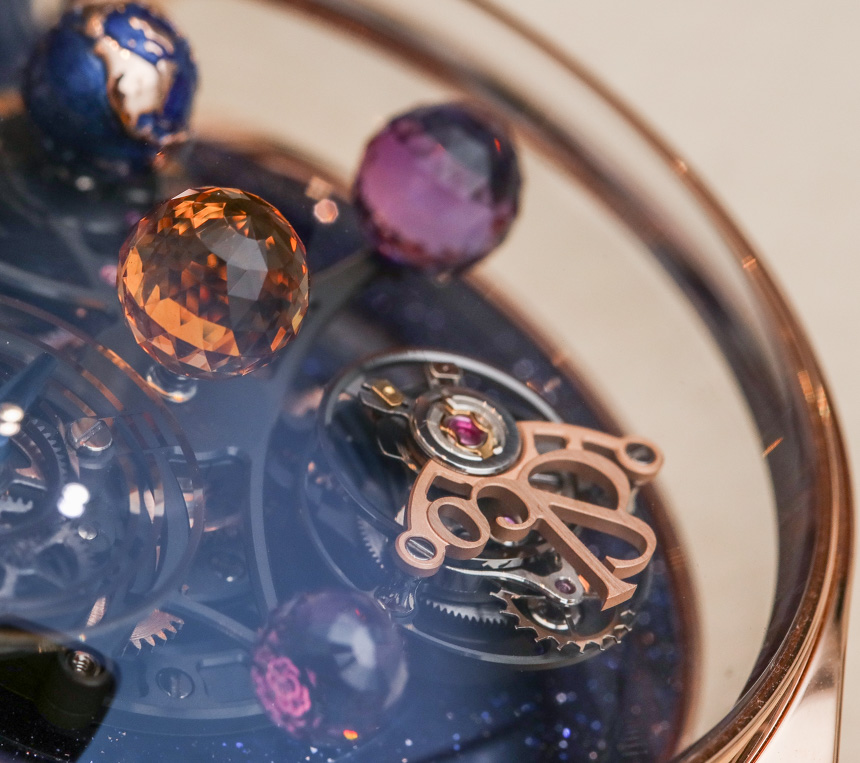 Like other Astronomia watches, the Jacob & Co. Astronomia Solar’s movement is exposed for all to see on the dial. There is a lot to see, and also a lot that moves. To begin, the movement actually consists of three separate arms; one arm leads to a sub-dial that displays the time; another leads to a flying tourbillon; and finally, the third arm leads to a globe. 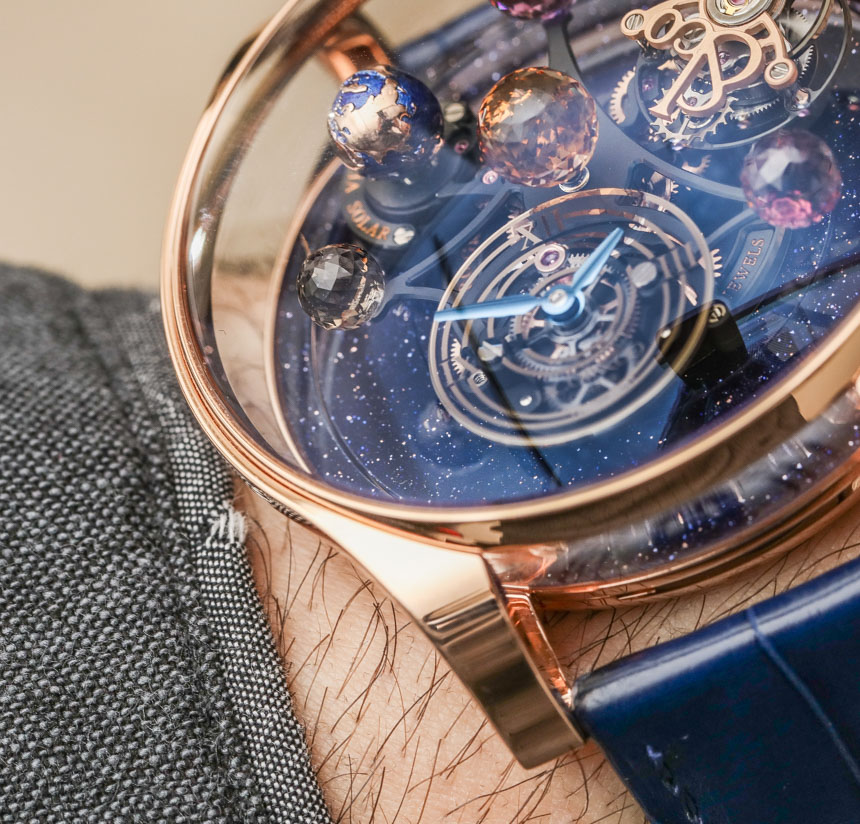 Though overshadowed, time is quite legible, the blued hour and minute hands are fairly large and contrast brilliantly against the 18k rose gold skeletonized sub-dial. The flying tourbillon features the logo of Jacob & Co. on the tourbillon bridge and it actually rotates on two axes. Yes, this isn’t an ordinary tourbillon, it is a bi-axial tourbillon. Horizontally, it makes a single rotation every 60 seconds. Vertically, it makes a rotation once every 10 minutes. 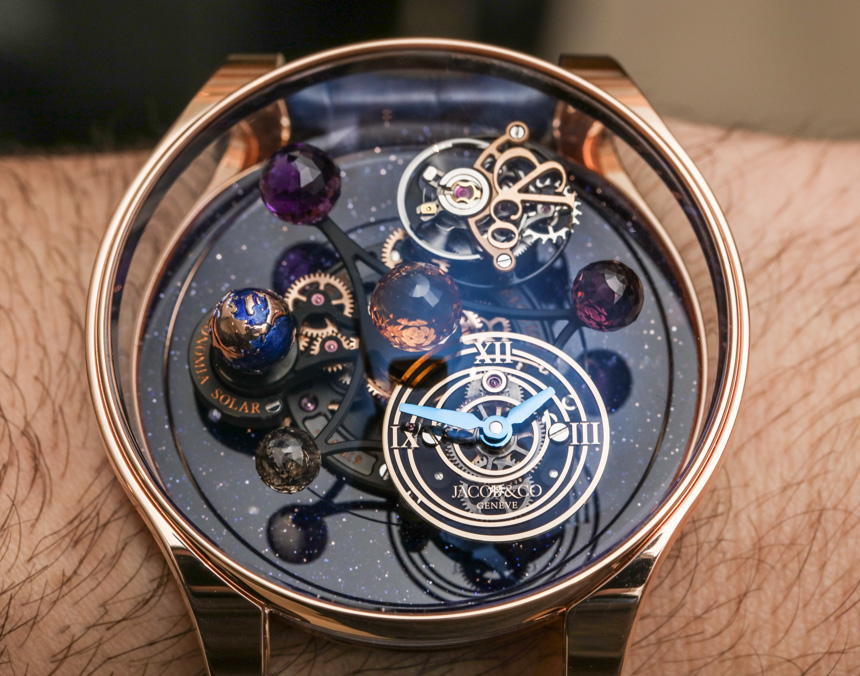 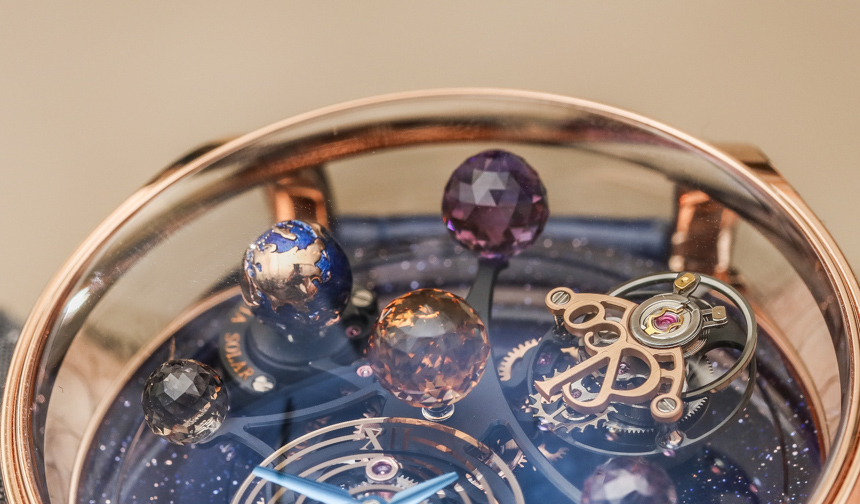 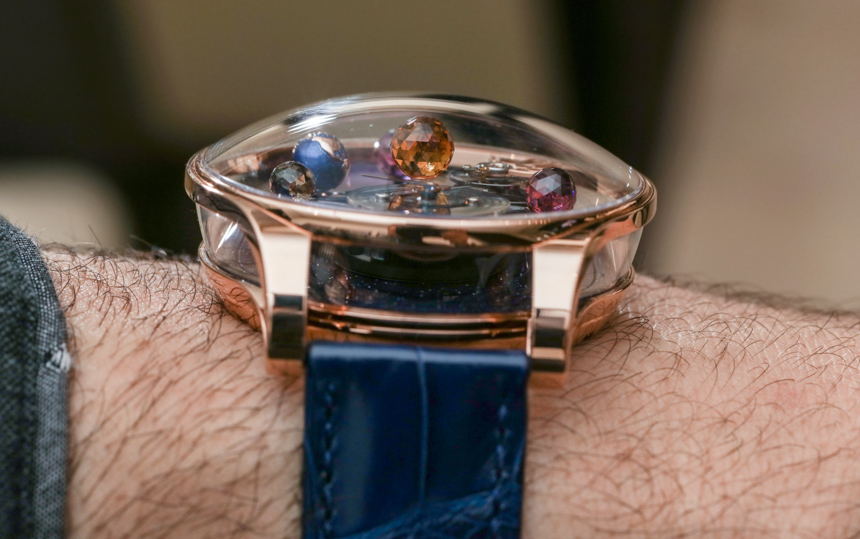 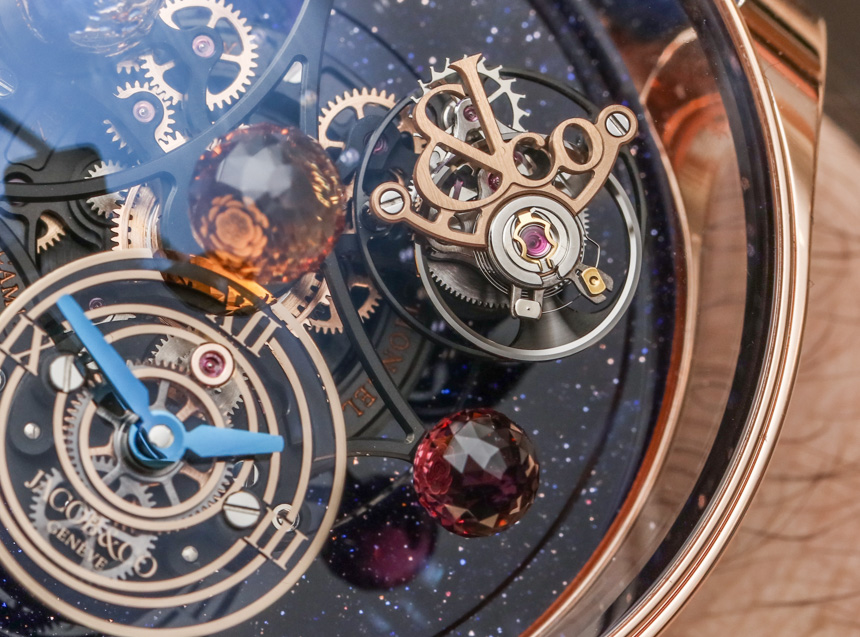 With the Astronomia Solar, Jacob & Co. wanted to create a model of our solar system in a watch. So in the middle of the dial is a large 1.5 carat Citrine crystal in a Jacob Cut that represents the sun. Jacob & Co. also uses three other stones in amethyst, garnet, and smoked quartz to represent other planets. These planets all rotate along with the movement, making a single rotation of the dial once every 10 minutes. The end result of all these rotating elements is stunning to behold and it does look as if you have a mini solar system spinning on your wrist. 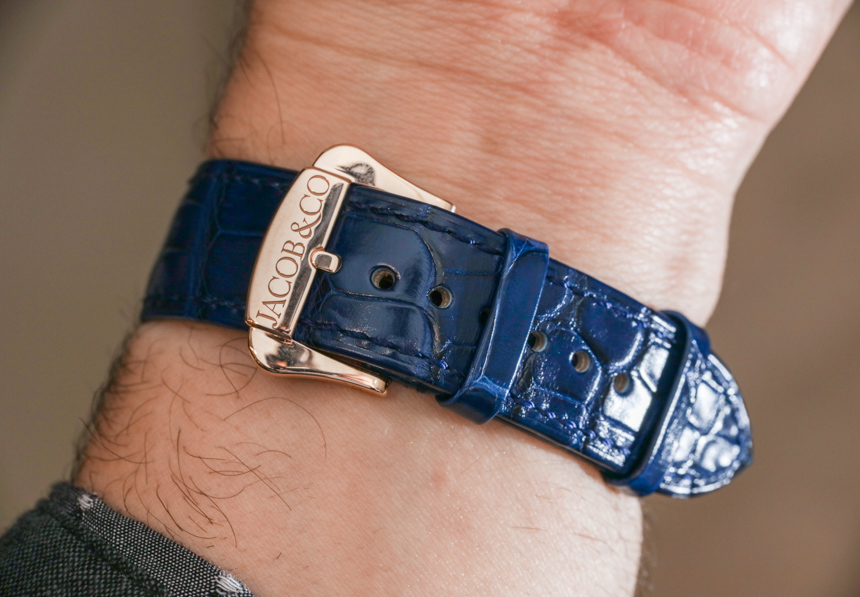 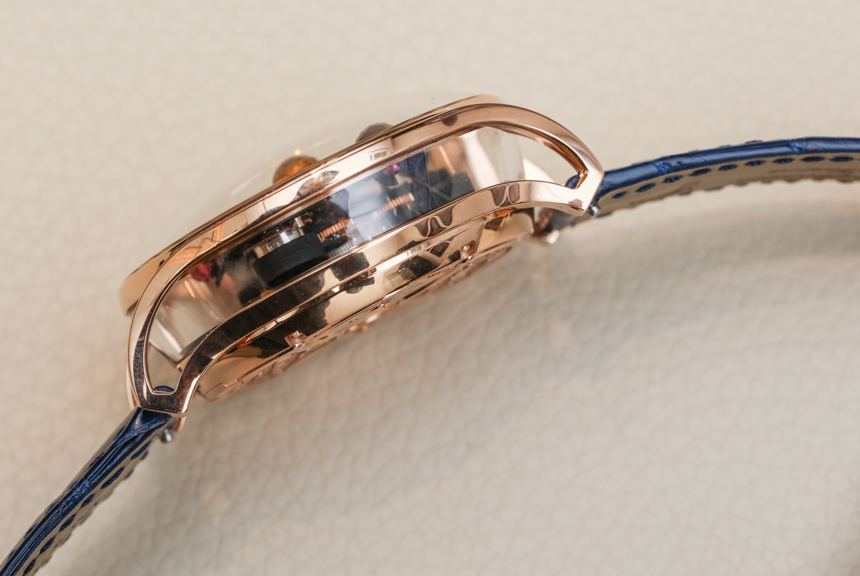 The movement that enables all this is in-house caliber JCAM19. Comprising of 444 components, the movement is unique because it is mostly constructed out of titanium. Since the mainspring has to drive so many rotating components, titanium is used to reduce the load on the mainspring. The tourbillon beats at 4Hz, and the JCAM19 has a power reserve of 48 hours. It is immaculately finished too, with sand-blasted and beveled bridges, circular graining on the gear train components, and polished countersinks and screws. 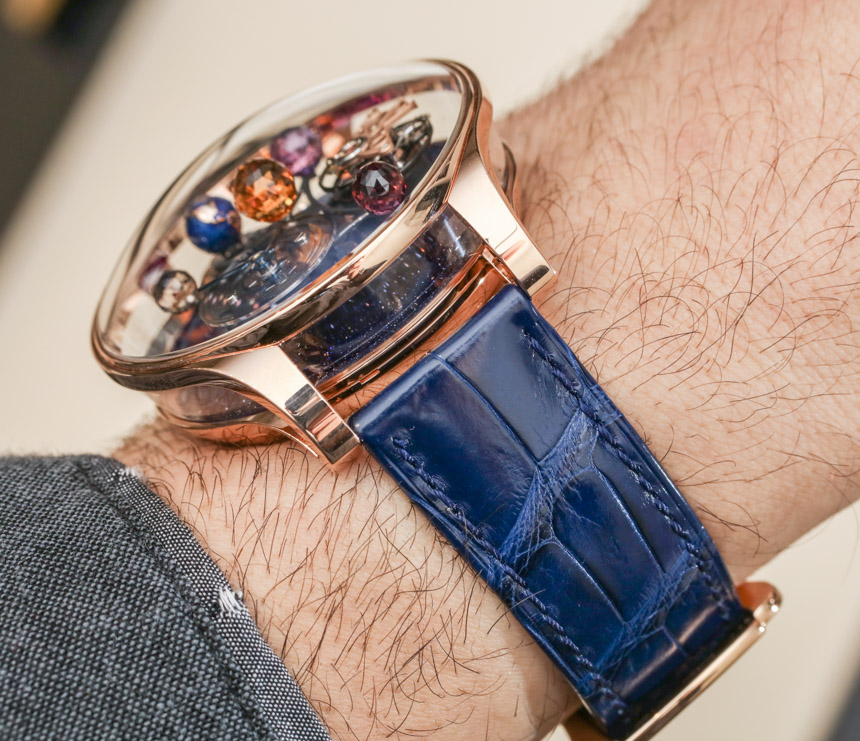 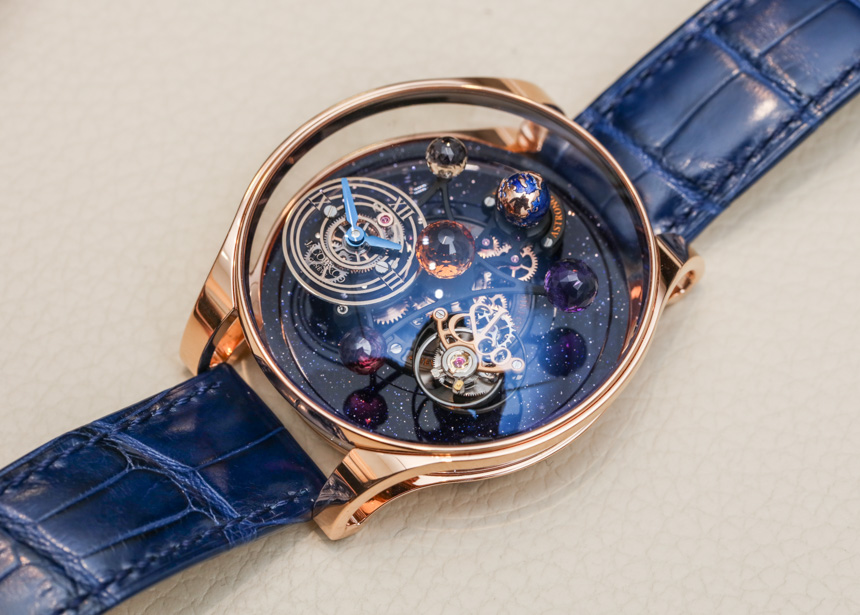 For visual appeal and as a statement piece, the Astronomia Solar watch has few equals. On the wrist, the watch screams “Look at me!” And certainly, the watch offers a lot to look at and admire. Admittedly, it is a little over-the-top and purists will argue that the watch doesn’t have any real practical use. For example, the positions of the planets are not accurate, unlike, say, Van Cleef & Arpel’s Midnight Planetarium watch, but compared to the Midnight Planetarium, the Astronomia Solar offers instant gratification in the way of its quick spinning bi-axial tourbillon and its dial, which is constantly changing positions and in motion. For a fun watch that lets people around you instantly know how much you are worth, I can think of few watches more adequate for the job than the Jacob & Co. Astronomia Solar watch. This limited production Jacob & Co. Astronomia Solar watch is priced at $280,000. jacobandco.com