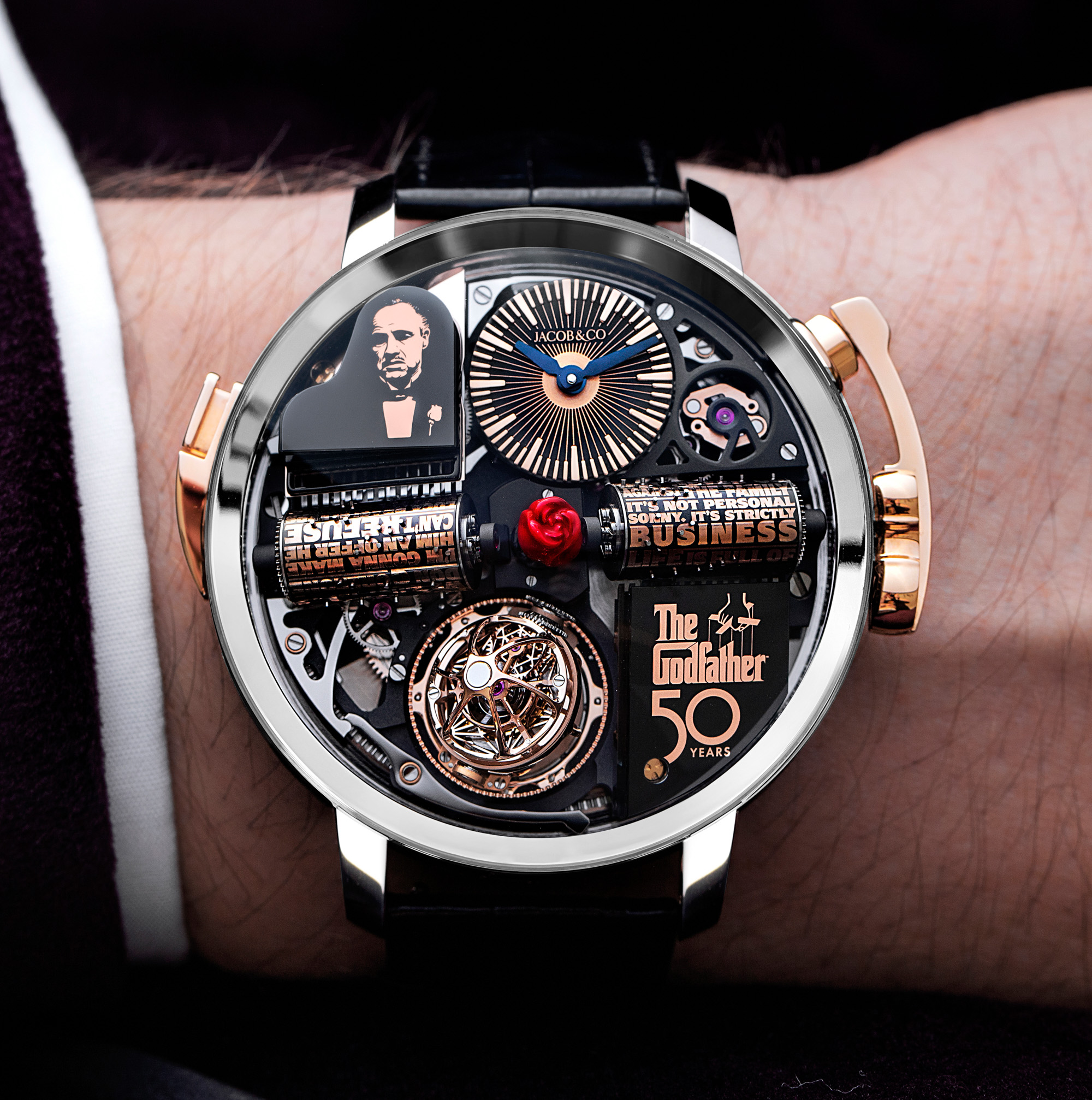 Fifty years ago, Francis Ford Coppola’s cinematic telling of Mario Puzo’s The Godfather was an instant classic with movie fans. It helped birth a long era of rich storytelling and deep character development in the “organized crime” entertainment genre, which then spawned The Godfather movie trilogy, as well as a long list of other films and television programs that have captivated the minds and imaginations of audiences everywhere. For some time now, high-end watch and jewelry maker Jacob & Co. has held an official license with The Godfather’s rights holders to produce luxury objects that, of course, include timepieces. Now, upon the 50th anniversary of the original film, Jacob & Co. introduces a new limited-edition variation of its Jacob & Co. Opera “The Godfather” watch.

Known as the reference OP110.30.AA.AA.ABALA, the watch builds upon the previous version of the Opera Godfather featuring detailed decorations that are meant to pay homage to 13 classic scenes from The Godfather film. Much of this is based around Marlon Brando’s character, Don Vito Corleone, who is among the more interesting and enigmatic mafia bosses in fictional history. That said, Puzo did have his fictional characters come from real places, including the “Corleone” name, which is an actual town in Sicily, where the powerful family from the film originated. Jacob & Co. chose Sicily as the place to unveil this latest limited-edition creation and high-luxury testament to one of the 20th century’s greatest films. 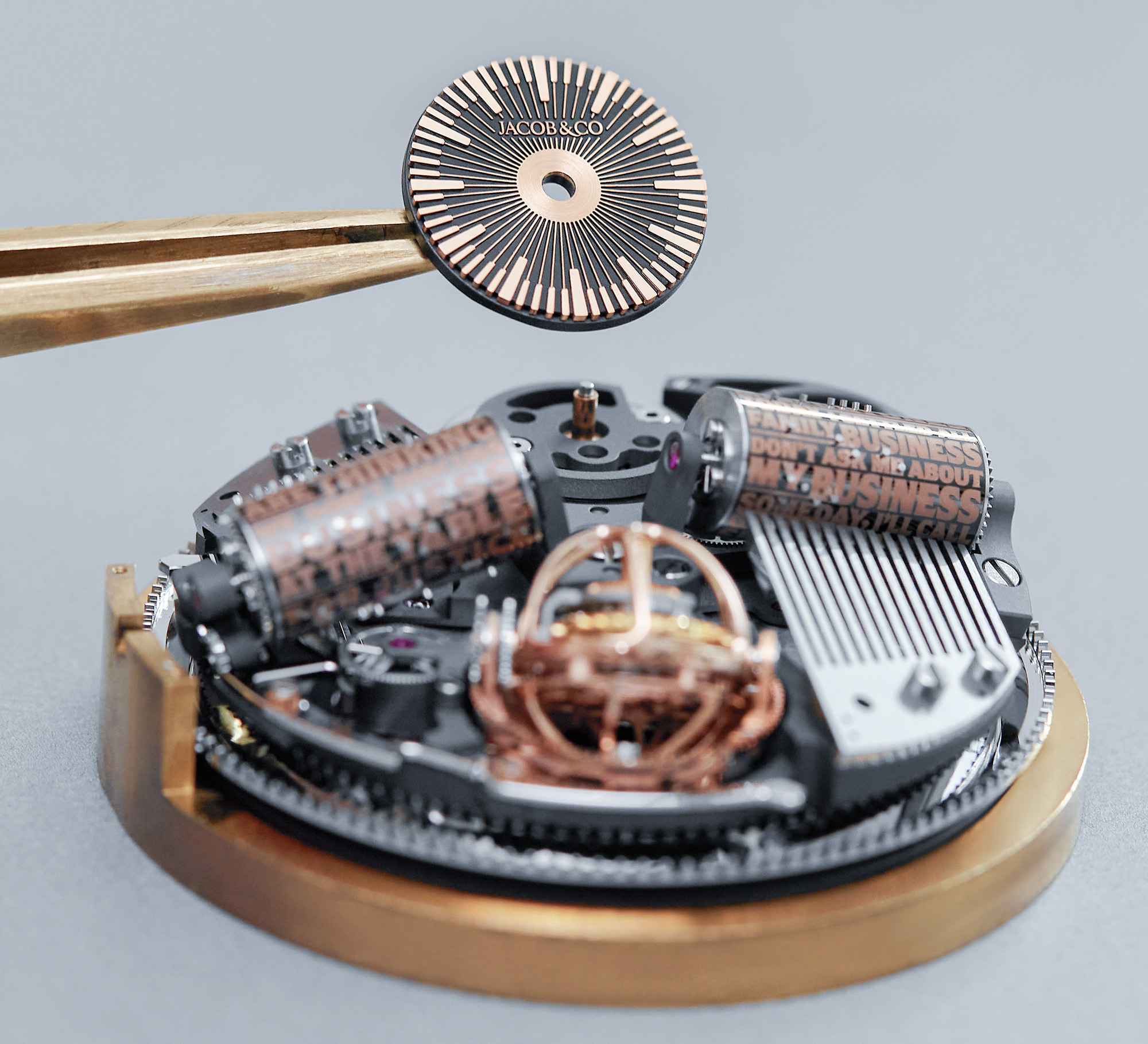 Why Jacob & Co. and The Godfather? In the luxury watch world, there is often a fascination around powerful people. Characters both real and fictional that hit a chord with our sense of self and our aspiration are often linked to the objects we lust after. In essence, our culture puts special emphasis on the actual items and garb donned by these real or imagined heroes. Barring actual items worn or used by these people, we are often more than happy to appreciate totemic objects later created in their honor. This psychology explains why kids want to dress like their favorite music stars and why some people have shrines to celebrate people and characters of importance to them.

Watches are objects of power, and the stories around them are vast and varied. When these objects connect to characters we admire, the mixture can lead to an interesting product experience that pulls on our emotional strings. Whether a watch is powerful because of its utility or powerful because of its exclusivity, watches remind the wearer of their hopes, aspirations, and also of those we admire. A watch like the Jacob & Co. Opera Godfather does many of these things. First, it reminds people about the powerful and loved central character of The Godfather movie (Don Corleone). Second, it offers impressive entertainment value in the form of its triple-axis tourbillon as a music box complication. Finally, as a luxury object, its sheer cost and complexity make it a desirable item and, thus, powerful to wear. Add to all that the fact that the Jacob & Co. Opera watch is anything but discreet. Similar in shape to the popular Jacob & Co. Astronomia, the Opera watch case is 49mm-wide and 23mm-thick. This is a very large watch, but with short lugs, it does offer wearability — just don’t try to slip it under any sleeves. 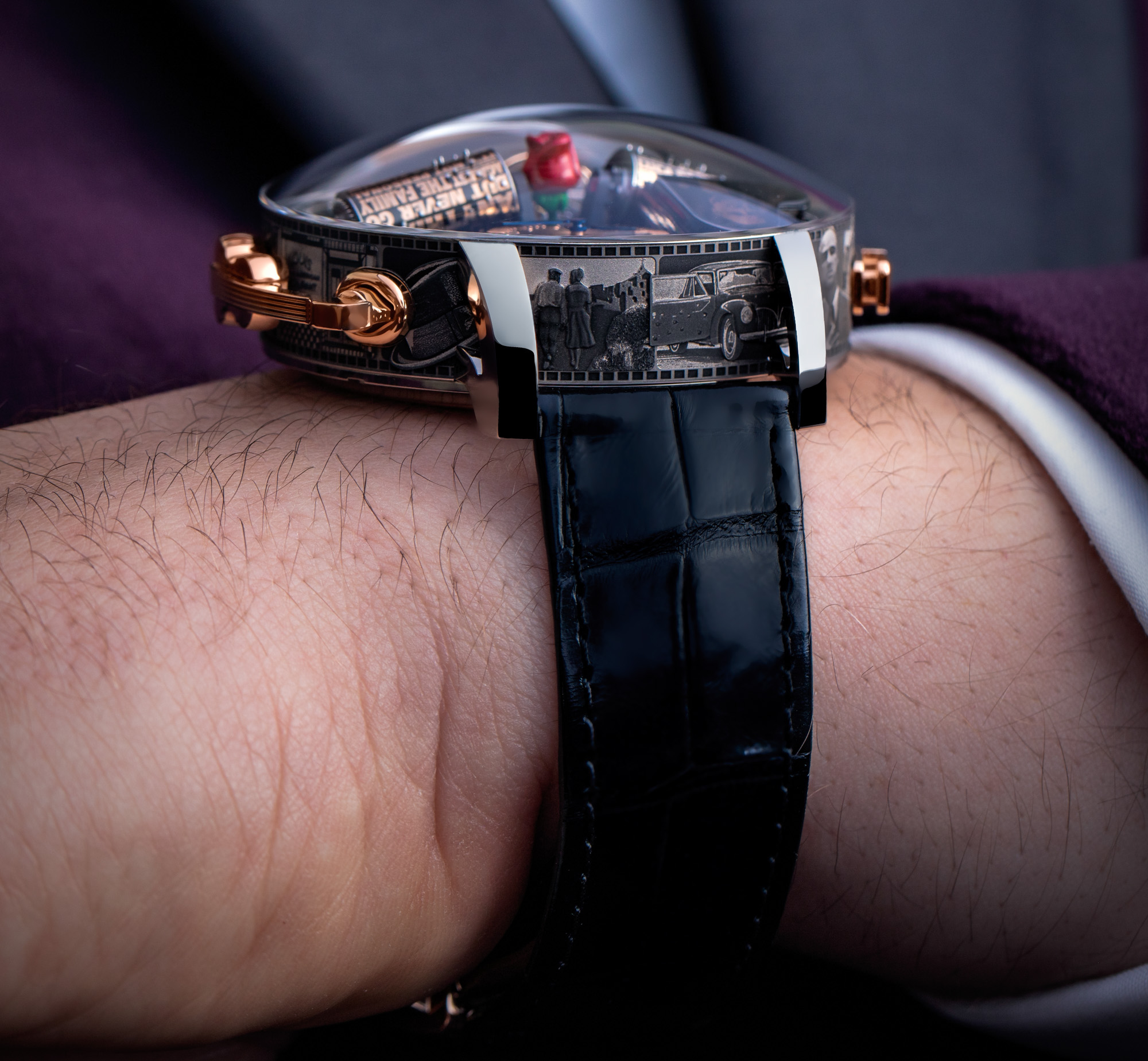 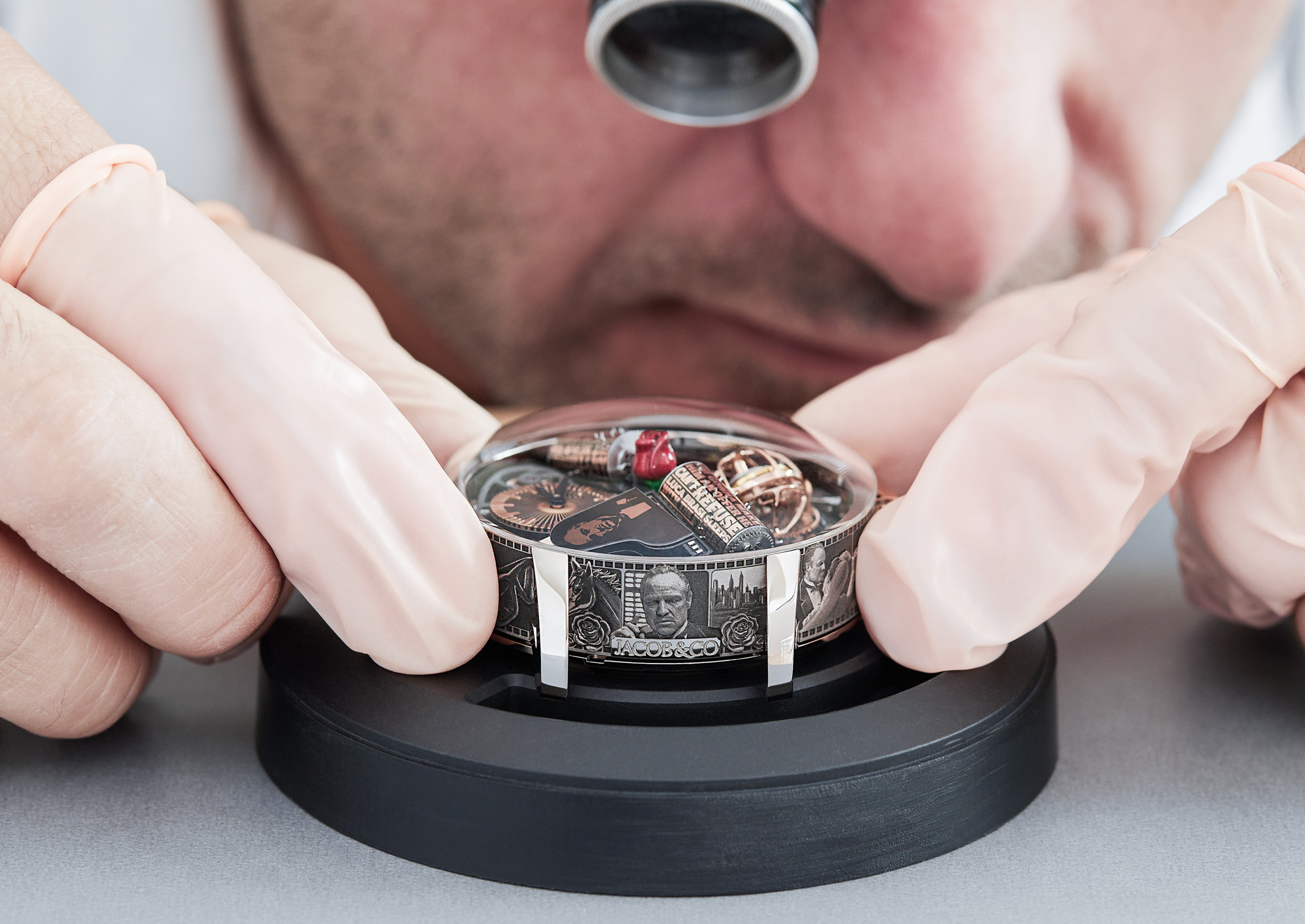 I write this article prior to having seen the Opera Godfather 50th Anniversary watch in the flesh, but I will follow up this timepiece release article with a hands-on look at the exclusive timepiece very soon, as I am due to join Jacob & Co. for the official release event in Sicily. I understand that in Sicily, it is not considered polite to speak about the mafia since it isn’t exactly the cultural export Sicilians want their island most known for. Of course, Jacob & Co.’s fascination with The Godfather isn’t about crime as much as it is about people of power and the personalities around them. 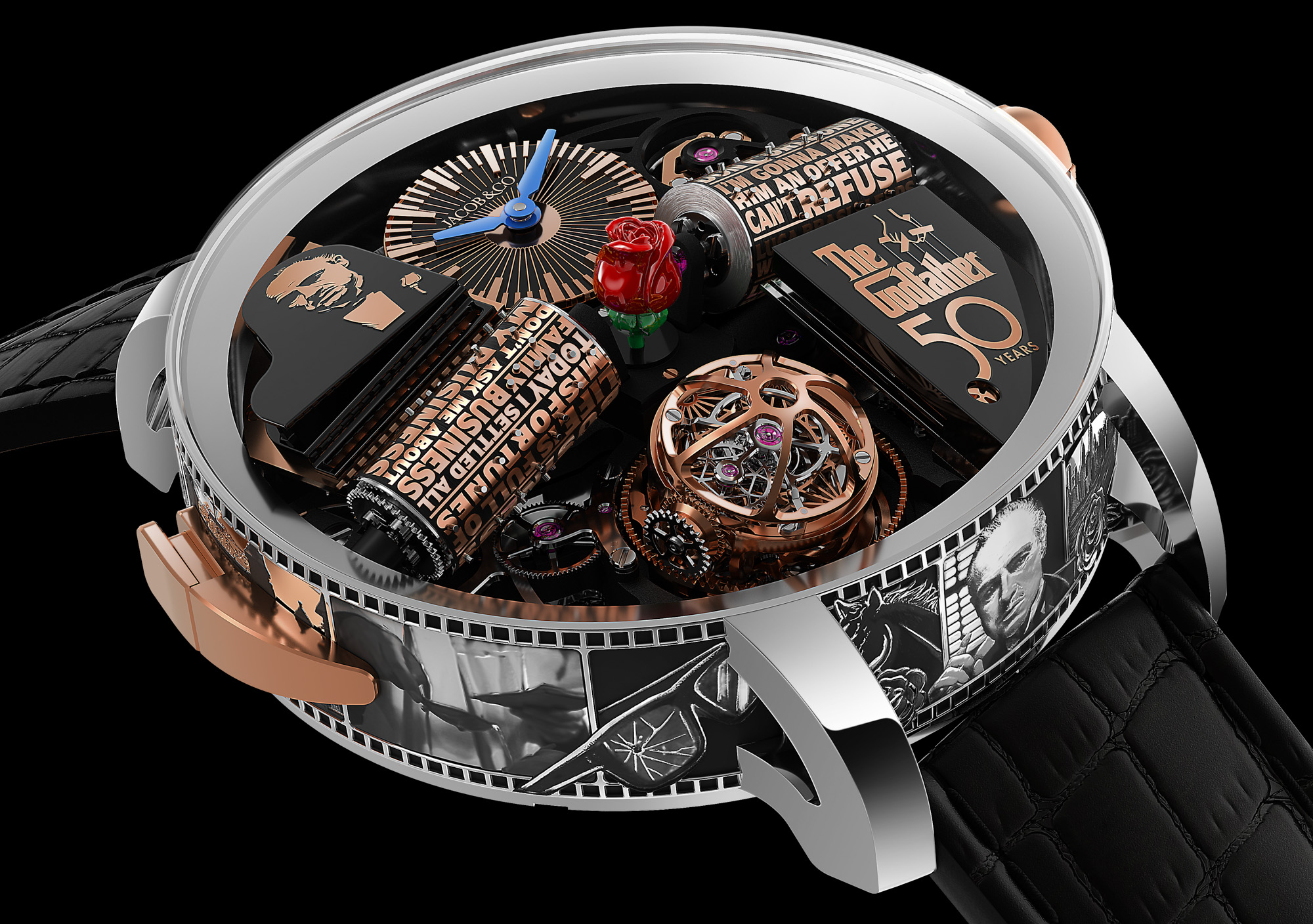 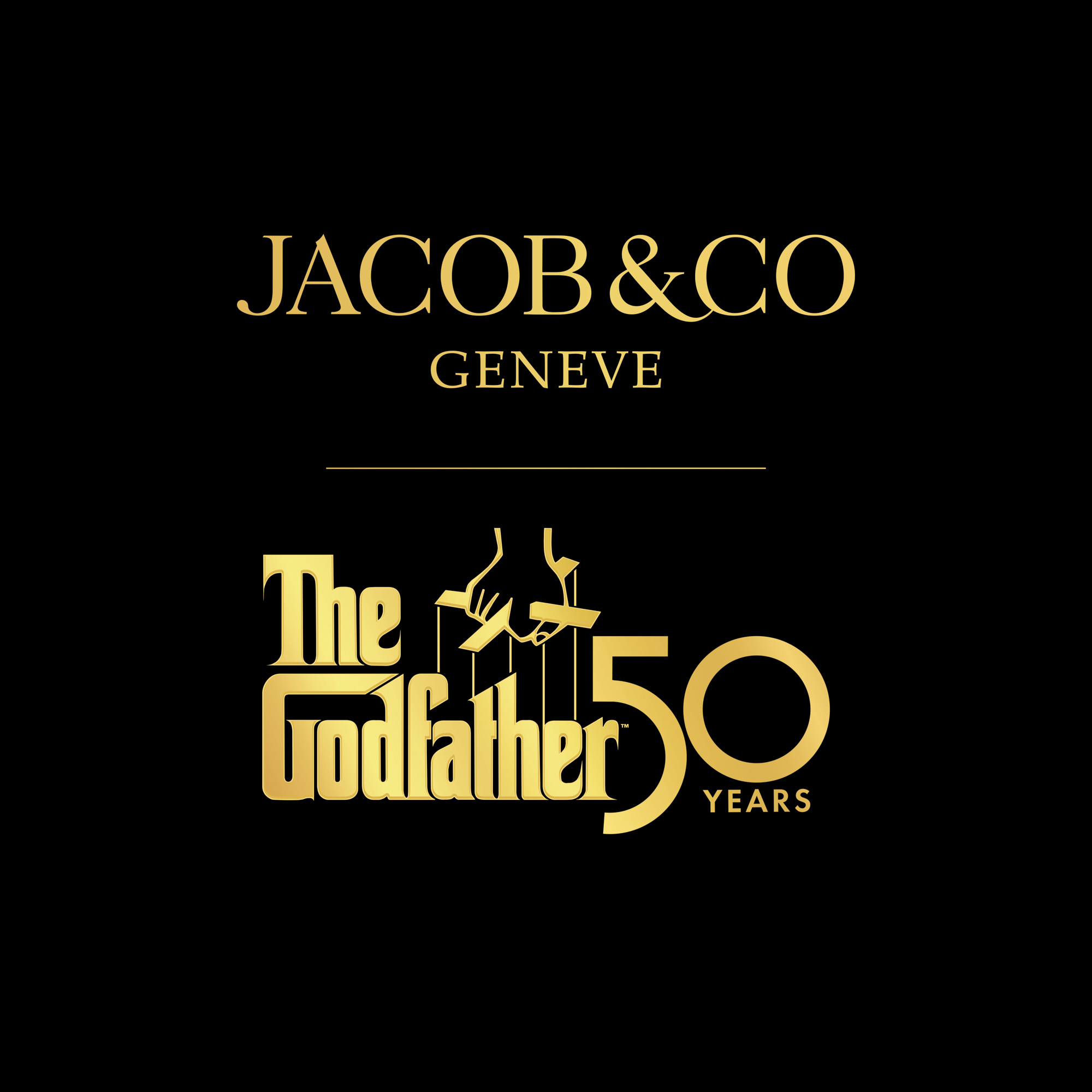 If you recall the film, Don Corleone broaches a number of important topics, such as how quietly and not brazenly to wield power, the importance of respect and friendship, being judicious with the application of violence, and the overall health of the community (Don Corleone, for example, is against the family getting into the illegal drug business for fear of its harmful effects to the community). At the same time, Don Vito is part of an older, perhaps romanticized generation that succumbs to the power ambitions and ease of money inherent in the drug war, which has in large part defined organized (as well as unorganized) crime internationally for the last several decades. In that sense, The Godfather was highly prescient in terms of its predictions as to what the future of organized crime was going to be like in the future. In the movie, after his son Michael takes over the family business, their goal is to move to Las Vegas and become involved in gambling — an activity that, in the movie, Don Vito claims is tolerated by politicians and that they would rather have run by the mafia (who they can ostensibly negotiate with) versus less civilized members of the criminal community.

I discuss all this as a means of exploring some of the deeper themes of The Godfather, as well as why it makes for a suitably tasteful backdrop upon which to release a luxury object. Many people today are still captivated by the enduring performances in The Godfather, and the lessons they learn from the dialog still have a major effect. With a watch like the Opera Godfather, Jacob & Co. is simultaneously honoring fans of the movie and also integrating itself into a still important facet of popular culture. How that honor manifests itself in this Godfather 50th Anniversary watch is interesting. The watch case and dial components make liberal use of novel forms of laser cutting and shading. Most notable is the 18k white gold case that around its periphery has been engraved with highly detailed black and white filmstrip style scenes from The Godfather film. The level of detail is excellent, and it shows how even today novel manufacturing techniques are giving luxury watches new abilities to dazzle with interesting visuals and decorative opportunities. More laser engraving is used on the dial, especially with the two music box barrels that are engraved with famous lines from the movie while also bearing the small pins which, when brushing up against the bank of blades, create the audible music notes. 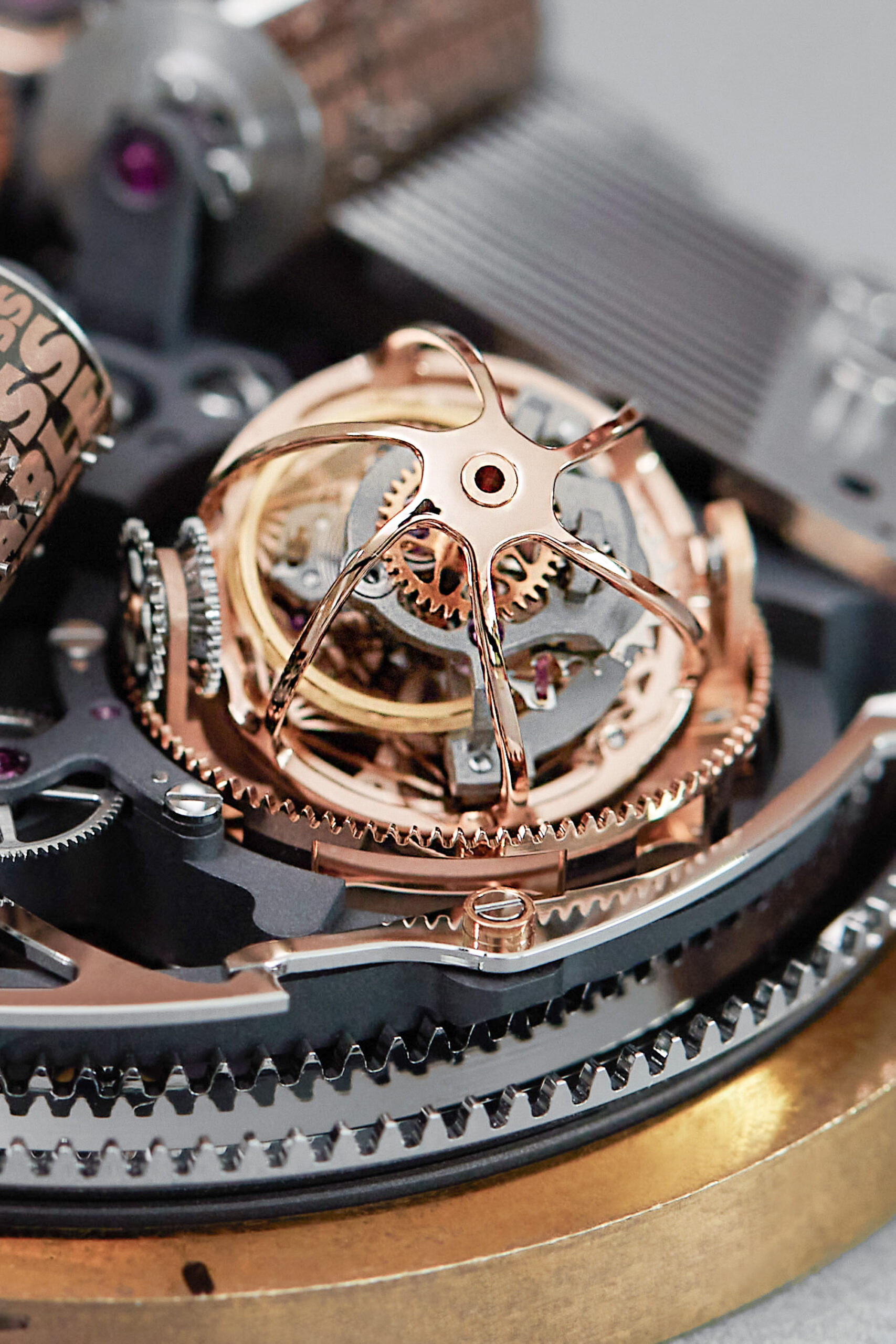 The watch case uses both 18k white gold and 18k rose gold (for components such as the crowns and the caseback). Contrasting color is a big part of the timepiece theme and also helps promote many of the small details on the case and dial that are to be admired. The watch dial itself has a lot going on. This includes text mentioning The Godfather 50th anniversary, as well as a depiction of Don Vito Corleone on the miniature grand piano. The dial features the entire assembly for the music box complication, including the two melody barrels, blade combs, an off-centered dial to indicate the time, and a prominent flying triple-axis tourbillon. The watch case has no traditional crown to set the time or wind the manually wound movement. Instead, these functions rely on a fold-out “bow-style” crown that is located on the backside of the case. What is located on the side of the watch is an activation lever (inspired by a violin). When operated, it sets the music box complication in motion, which plays the famed The Godfather theme song. Note that one reason the watch crystal is so high is to allow for a reverberation chamber that helps amplify the music from the music box complication.

What is also interesting about the movement and music box complication is that when activated, the entire dial of the watch rotates. This visual animation doesn’t serve any practical function, but like the hand-painted miniature red rose located in the very center of the dial (in the previous version of Jacob & Co.’s Opera Godfather watch, in place of the rose was a miniature hand-painted bust of Don Corleone), the spinning dial contributes to the overall “wow” effect that this timepiece seeks to offer. 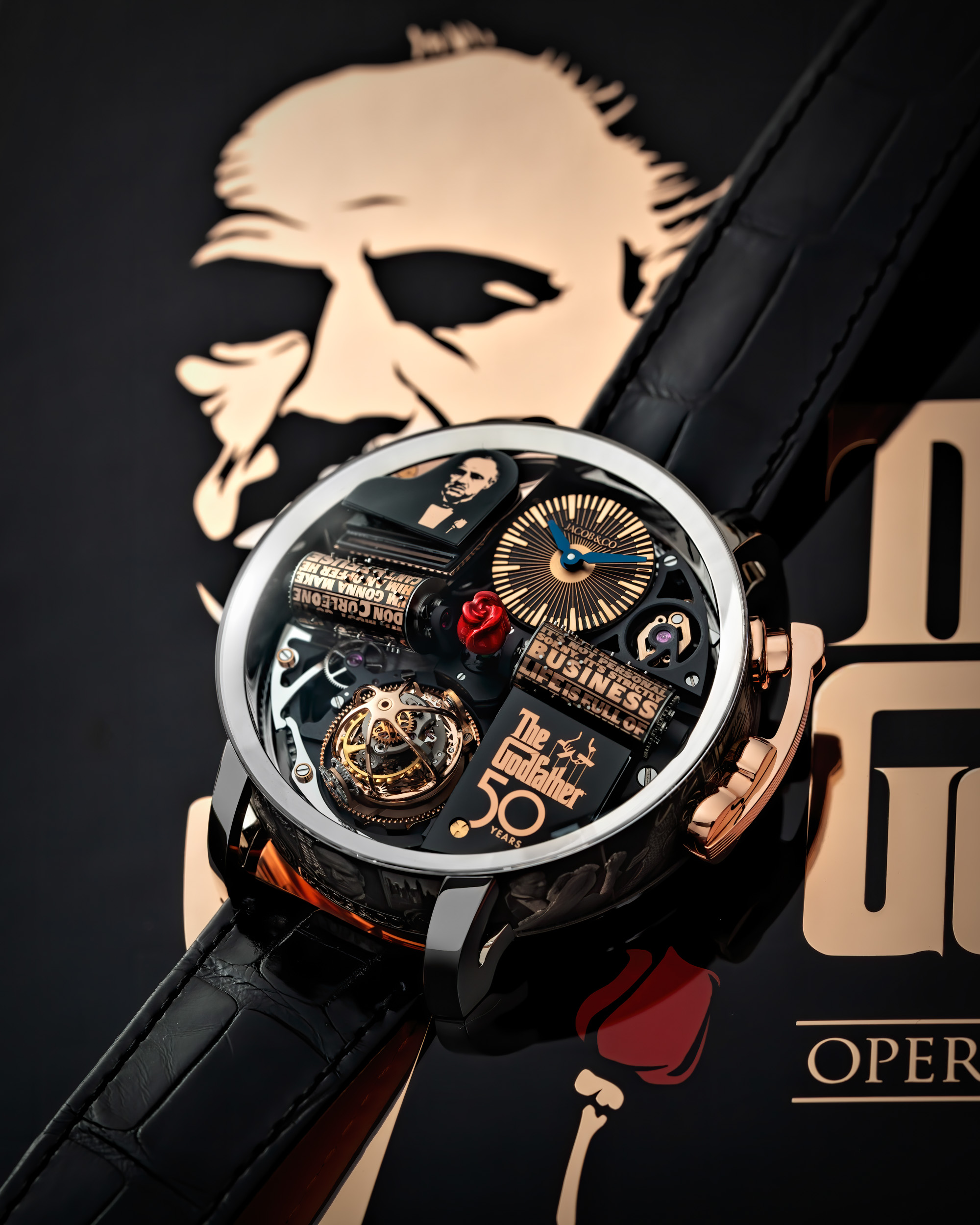 The Opera’s caliber JCFM04 movement was developed by Jacob & Co. with its close-knit group of suppliers and experts in Switzerland. It is manually wound, operating at 3Hz with a power reserve of 42 hours. The highly intricate movement is made up of 658 parts, most of which are produced from gold, steel, brass, or titanium. The horological centerpiece of the Opera’s movement isn’t actually the music box but rather the flying triple-axis tourbillon. While single-axis tourbillons once cut it as ultra-luxury objects, nowadays companies like Jacob & Co. have had to step it up if they want to charge top dollar for their mechanical creations. Accordingly, the sphere-like tourbillon assembly rotates on three axis points. Oddly, none of these rotations is 60 seconds, so the tourbillon cannot really be used as a seconds indicator (not that you were worried about that). Jacob & Co. designed the Opera movement’s three tourbillon axis points to have rotational times of 24, 48, and 180 seconds respectively.

Presentation is very important to Jacob & Co. and accordingly the Opera Godfather 50th Anniversary watch will come in a red-velvet lined case befitting a creation of this caliber. I believe that Jacob & Co. even has other objects it has created for the 50th anniversary of the film. More to come after I have completed my visit to Sicily with the brand and am able to inspect the Jacob & Co. Opera Godfather 50th Anniversary watch myself. Price for each of the 50 limited edition pieces of this reference OP110.30.AA.AA.ABALA watch is $500,000 USD. Learn more at the Jacob & Co. website here.