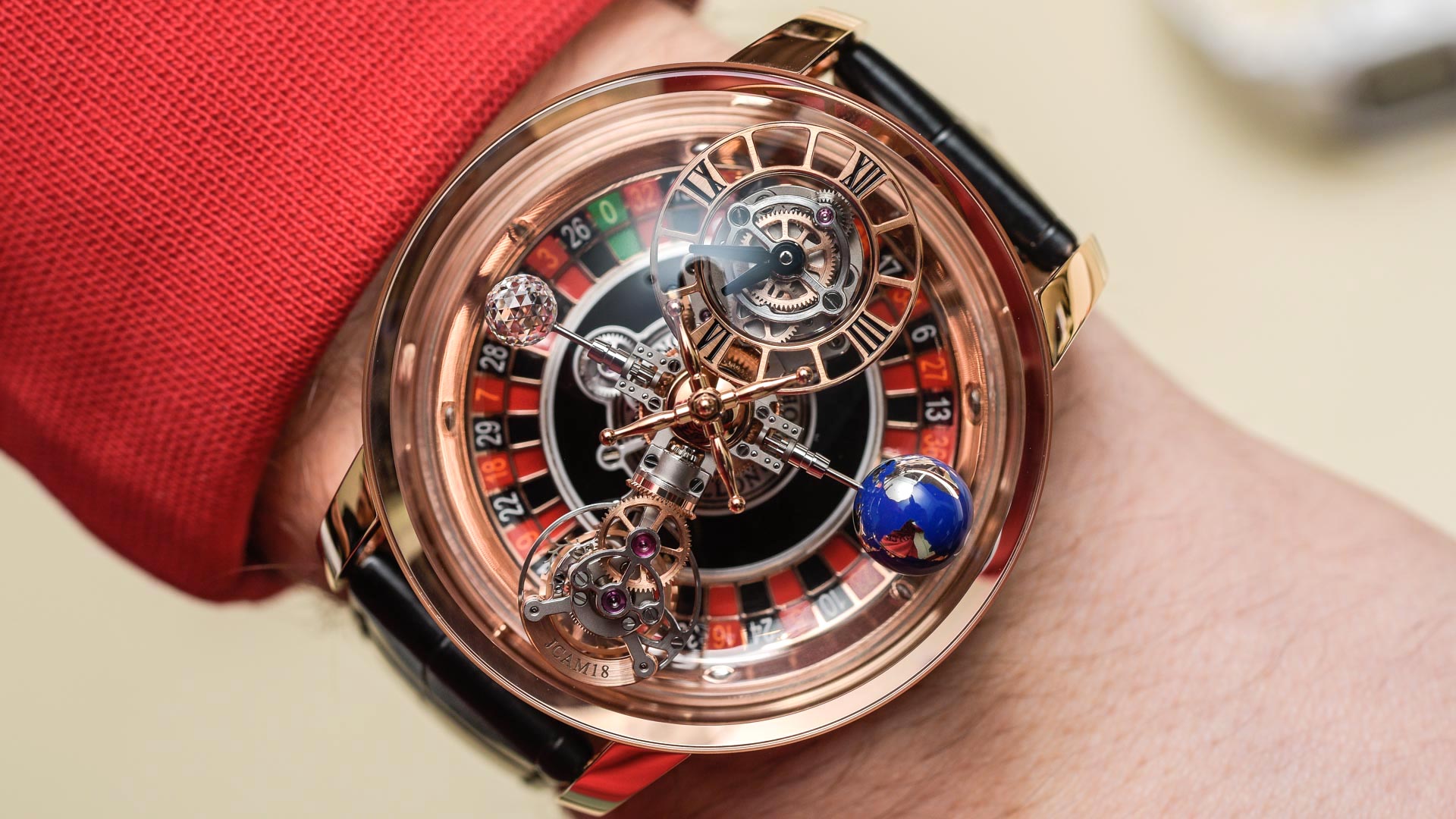 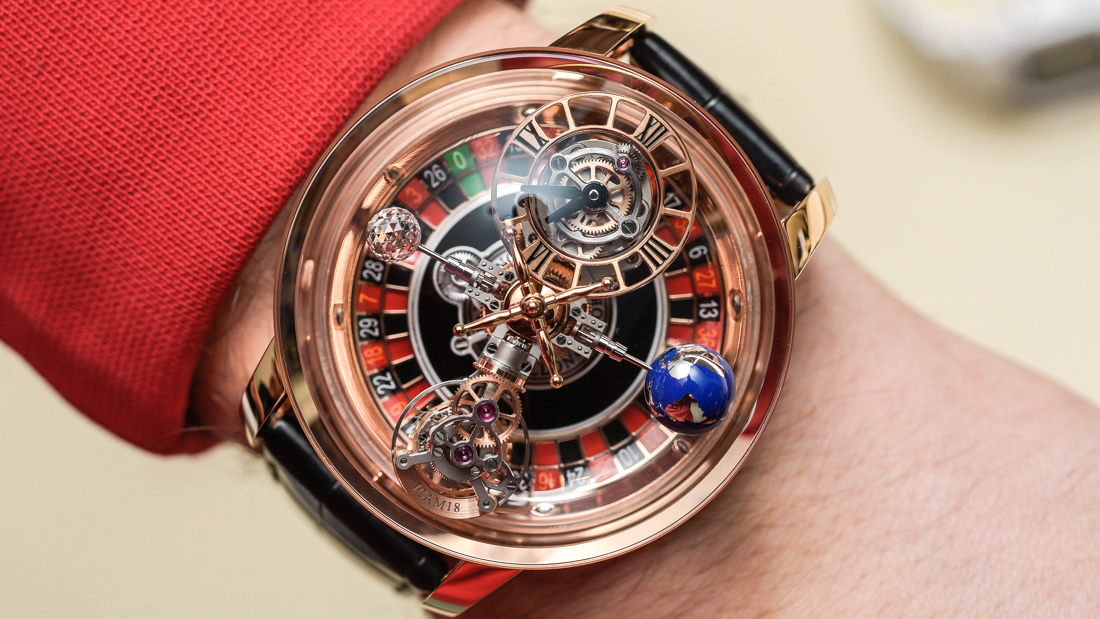 The Jacob & Co. Astronomia Casino, also known as Jacob & Co. Astronomia Gambler, is another unique creation from Jacob & Co., conceived, designed and produced to be another step toward their goal of ruling over the segment of preposterously over-engineered, fun, ultra-high-end watches — because such a thing does exist and has, in fact, existed for years. 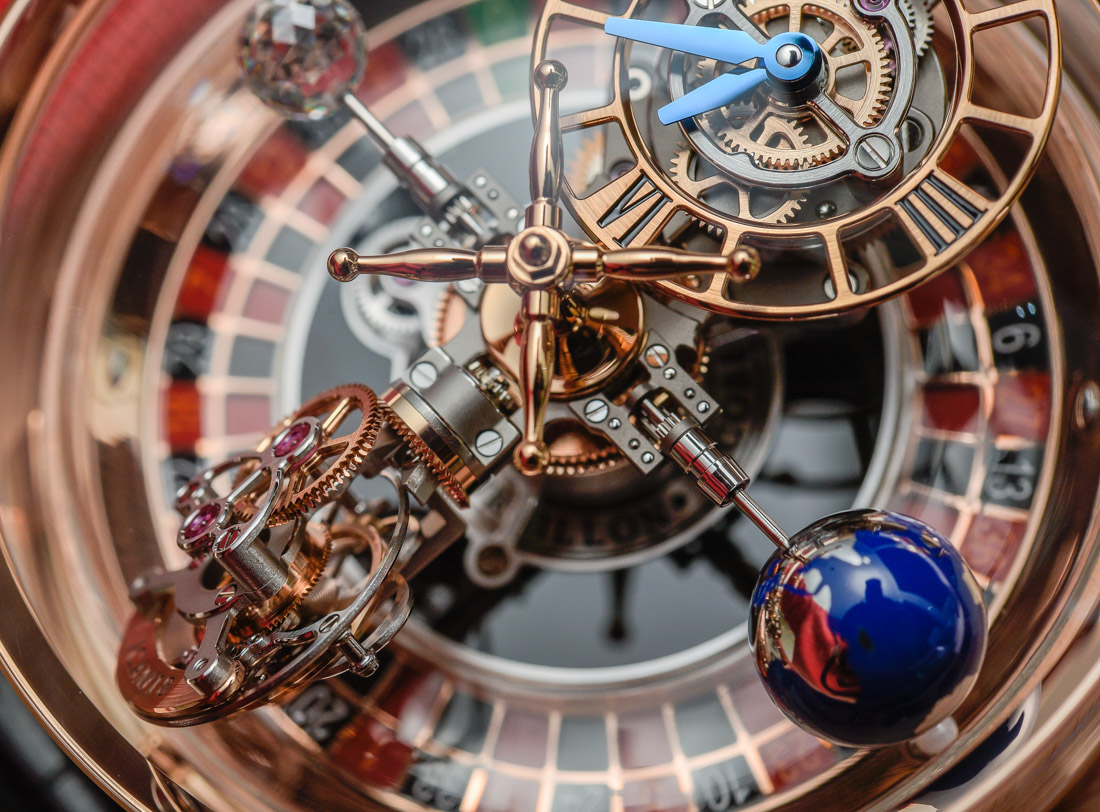 Whereas the mid-naughties were ruled by Harry Winston Opus watches — widely and rightfully credited as the original source of haute horlogerie creations that defied established limitations in design and functionality — the early teens were all about musical Jaquet Droz pieces, big-brand grand complications with perpetual calendars and chronographs and chiming mechanisms. (Some basic research will lead you to realize how the values of these things from the likes of Audemars Piguet, IWC, A. Lange & Söhne, and others have dropped off a cliff, sometimes down to 25 to 30% of their original retail price.) Why am I saying this? For one, because it was only recently that I came to realize how this was a frequent thing with “grand complications” and not just “one-off” lemons, and second, to show that so many of those who can afford these things are ready to take a blow on their purchases (or even if ready they are not, they are forced to, should they wish to exit a position in one of these watches). 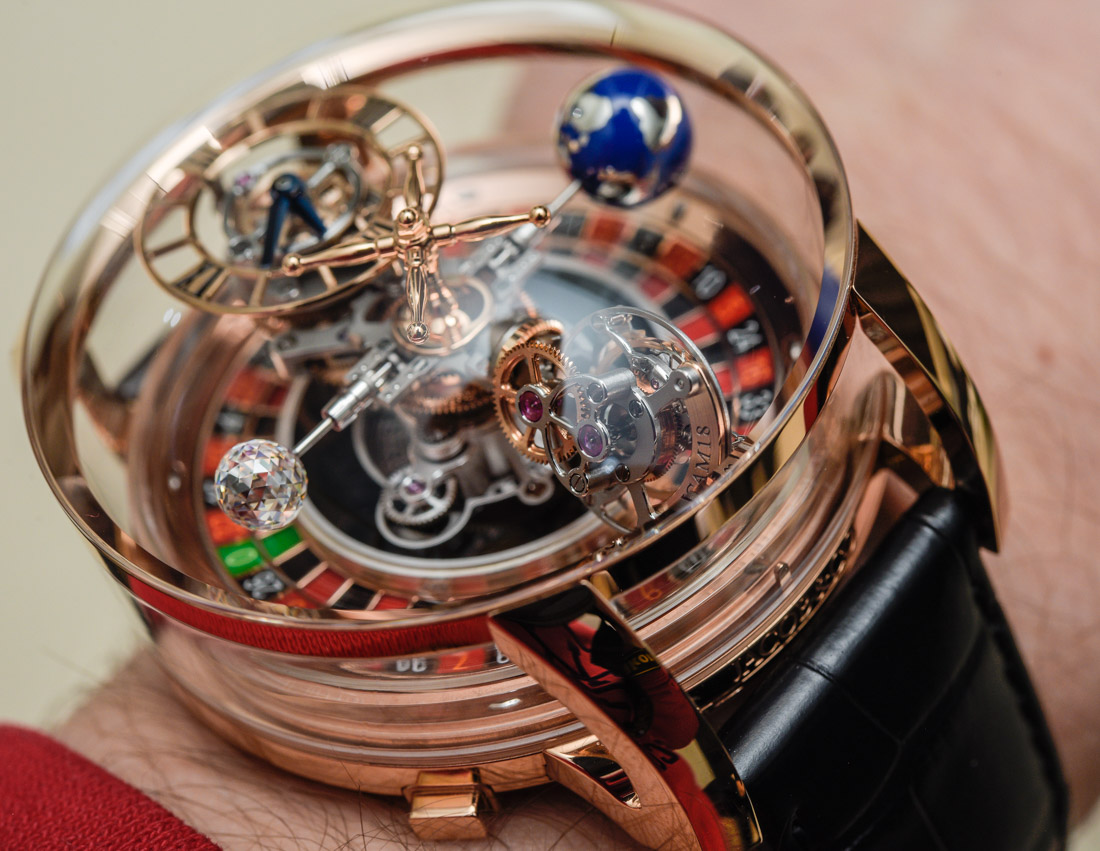 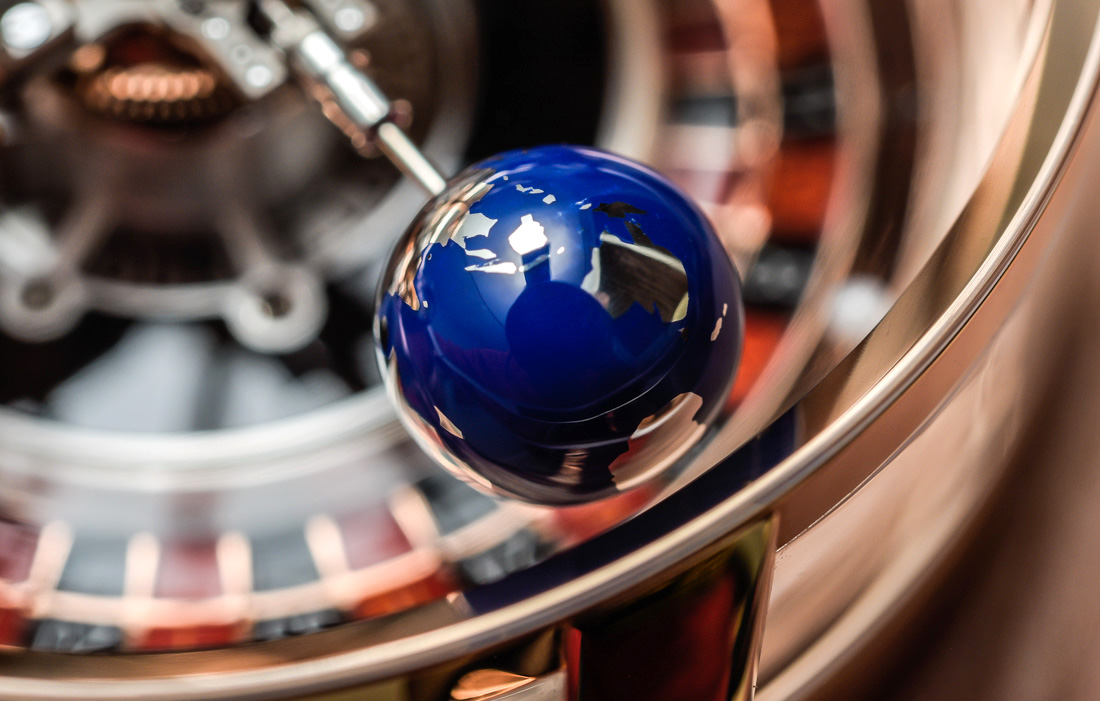 Why do these traditionally highly valued watches tend to take such a massive hit in their “value,” save for a select few references that are like currency? For one, because they were severely over-produced. When you can pick up an Audemars Piguet Jules Audemars “Equation of Time” Calendar for $28,000, even though it originally retailed for nearly $110,000, or an IWC Grande Complication Minute Repeater Perpetual Calendar Limited Edition for $80,000, though it originally retailed for around $250,000, the relative abundance of these watches really strikes back. Another element to consider is that they simply are not fun anymore — not in the eyes of their original owners. The perpetual calendar kool-aid was strongly addictive back around the late ’00s, but when the only thing you can say for one of the key complications in your watch is, “Yeah, it’s not doing anything right now that you can see, but do you even know how complicated this is?” — that’s not a good sign. 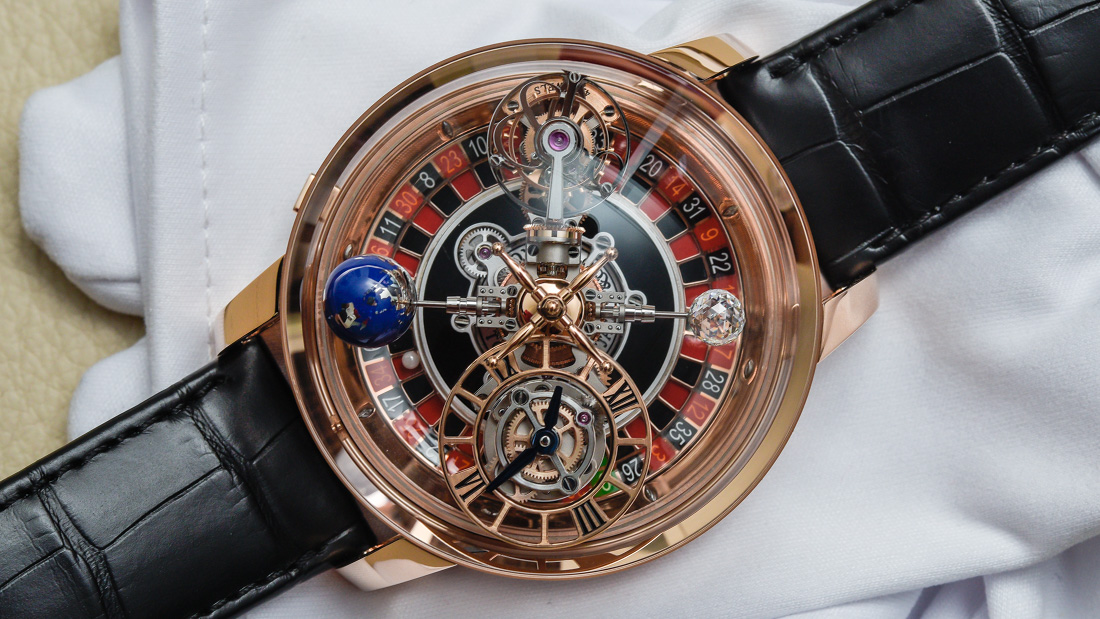 Like it or not, the resale value of these once-upon-a-time grail status watches tells you more about their current desirability than I ever could. Those with six-figure amounts (in USD) available to burn on a watch purchase have migrated towards watches that are any one or more of the following: 1) novel, 2) fun, 3) expressive, 4) unique, 5) easy to appreciate. As always with watches, the more boxes you tick, generally speaking, the higher the price. The Jacob & Co. Astronomia Casino has gone to extreme lengths to tick all those boxes, and then some. 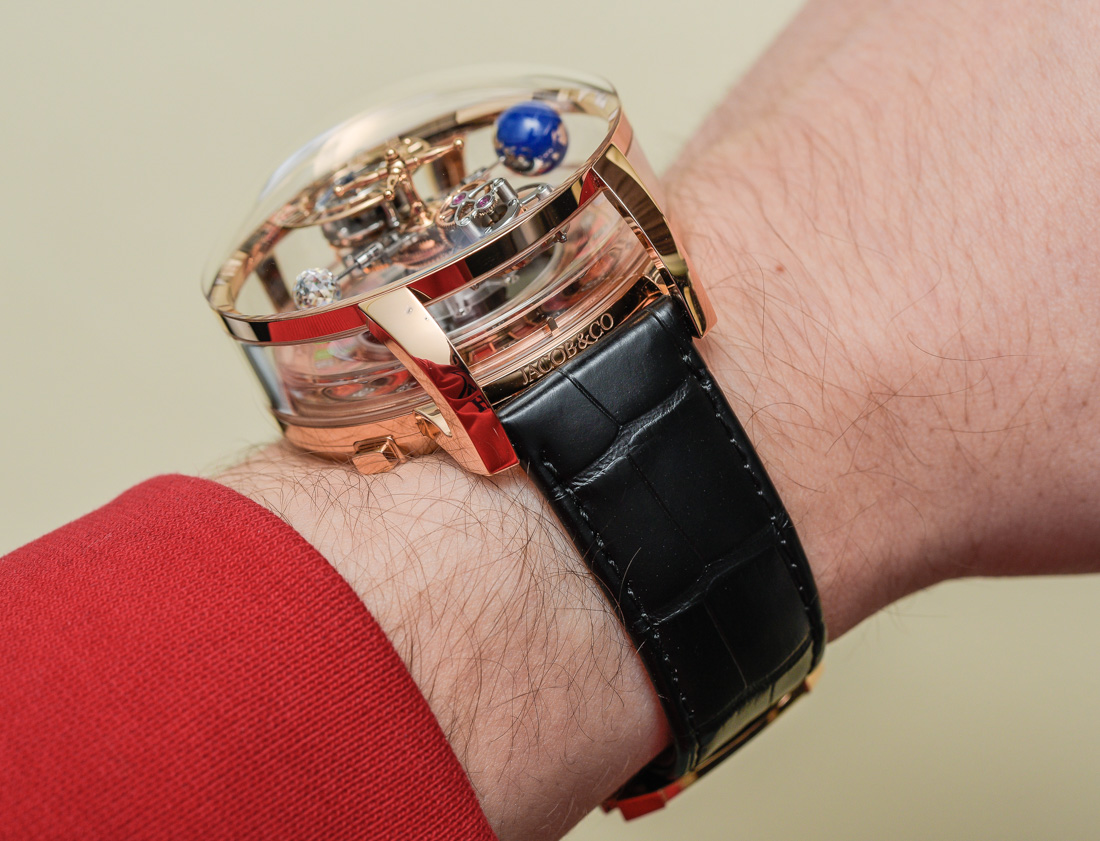 With its — there’s no other word for it — ridiculous thickness of 27.9 millimeters (that is an inch and then some!), it’s a watch to be easily appreciated from up close… as well as the other side of the dinner table. It’s as discreet as sitting at dinner with a 1940s Francis Bacon fixed above your head, like a sail. The heft is validated by a multi-tier, multi-purpose JCAM29A caliber that comprises the Astronomia “vertical caliber” with its rotating platform of four rotating arms and a fully functioning, fully mechanical roulette complication that lives underneath it. 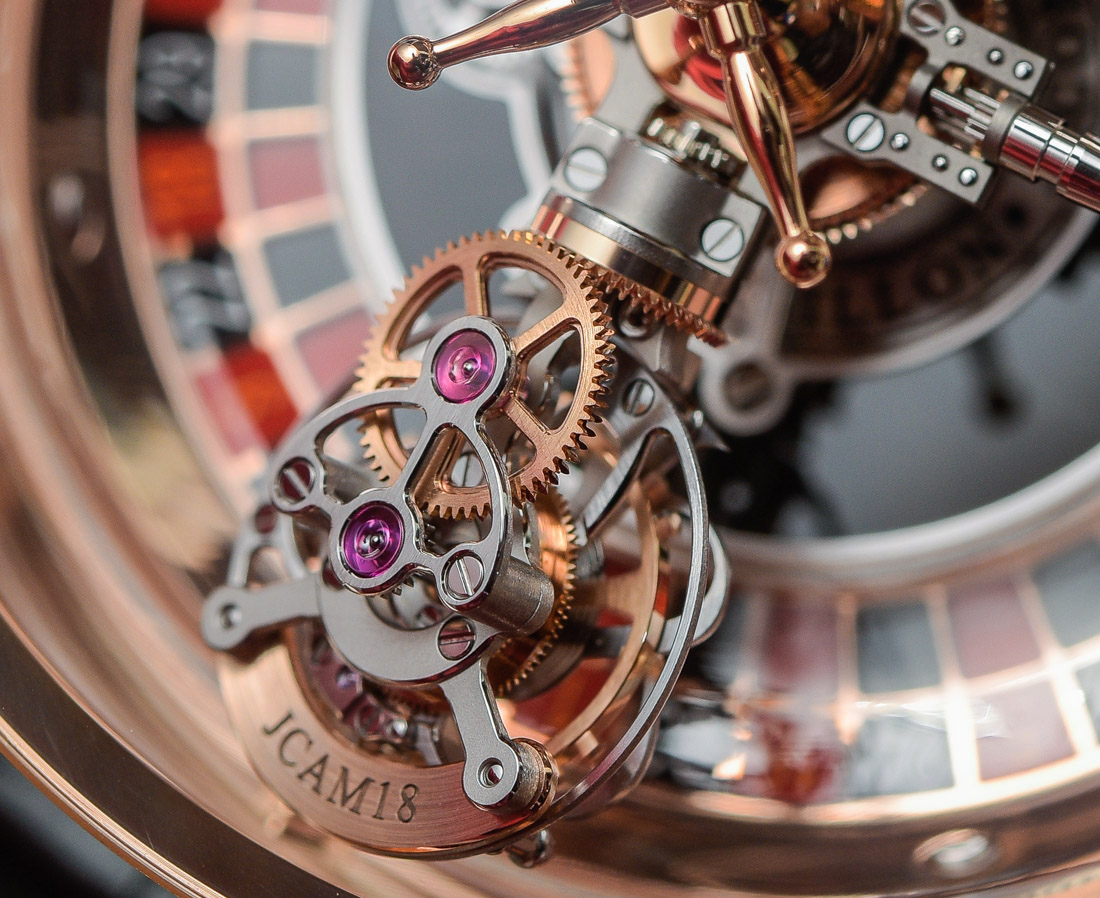 First, a few words about the Astronomia. Although Jacob & Co. has created many wildly different variations of this movement, it remains genuinely outstanding as far as its construction and function are concerned. Powered by a single mainspring with a respectable power reserve of 60 hours (can be longer or shorter depending on the model variation and added complications), essentially every component other than the mainspring barrel and the winding and setting “bows” (crown-replacements on the caseback) live up in this four-arm assembly. 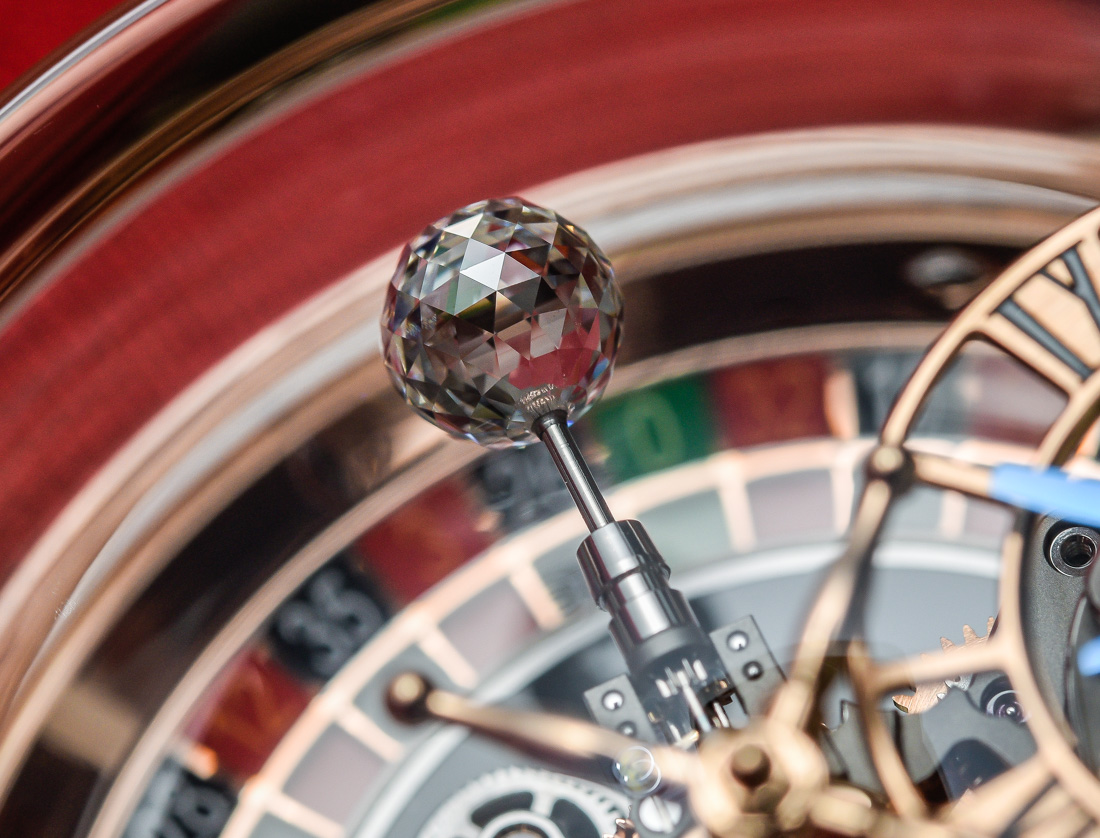 The four arms carry a bi-axial tourbillon (that becomes a triple-axis tourbillon in ways I shall explain soon), a miniature planet earth in blue magnesium, a 1-carat, 288-facet Jacob cut diamond that also rotates around its own axis, and a differential driven sub-dial for the time. These four arms perform a rotation across the face of the watch together and simultaneously, in under 10 minutes — and it is this rotation that adds the third 10-minute axis for the tourbillon. 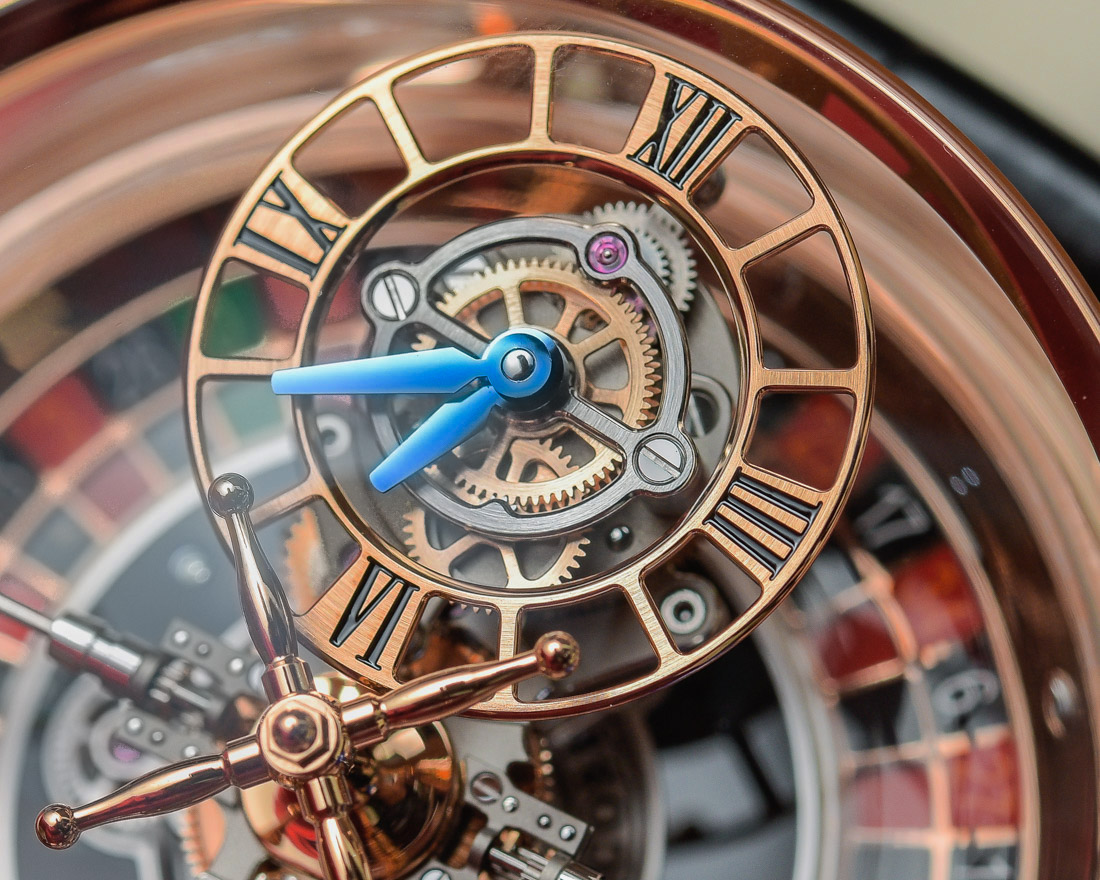 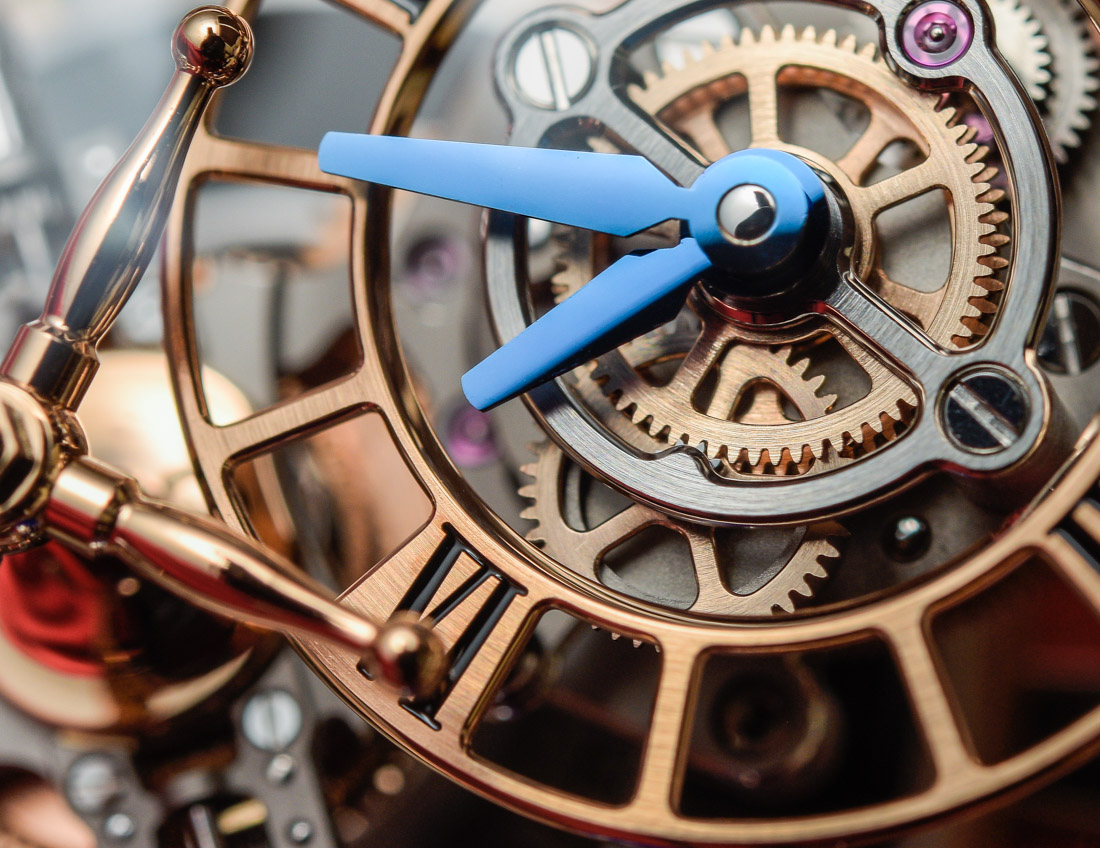 The time display rotates with this assembly, and so, to keep it from turning upside down as it orbits the face of the watch, the implementation of a differential was required. This allows for the sub-dial to remain level, for the hands to be driven, and for the entire assembly to rotate together.

As impressive the tourbillon and the rotating diamond may be, my favorite two feats in the Astronomia are this differential driven-time display and the fact that each two opposing arms are perfect counterweights of each another. That’s some cool “invisible engineering” that saves the movement from suffering excessive strains from an overweight arm that would pull or push the delicate-going train assembly. 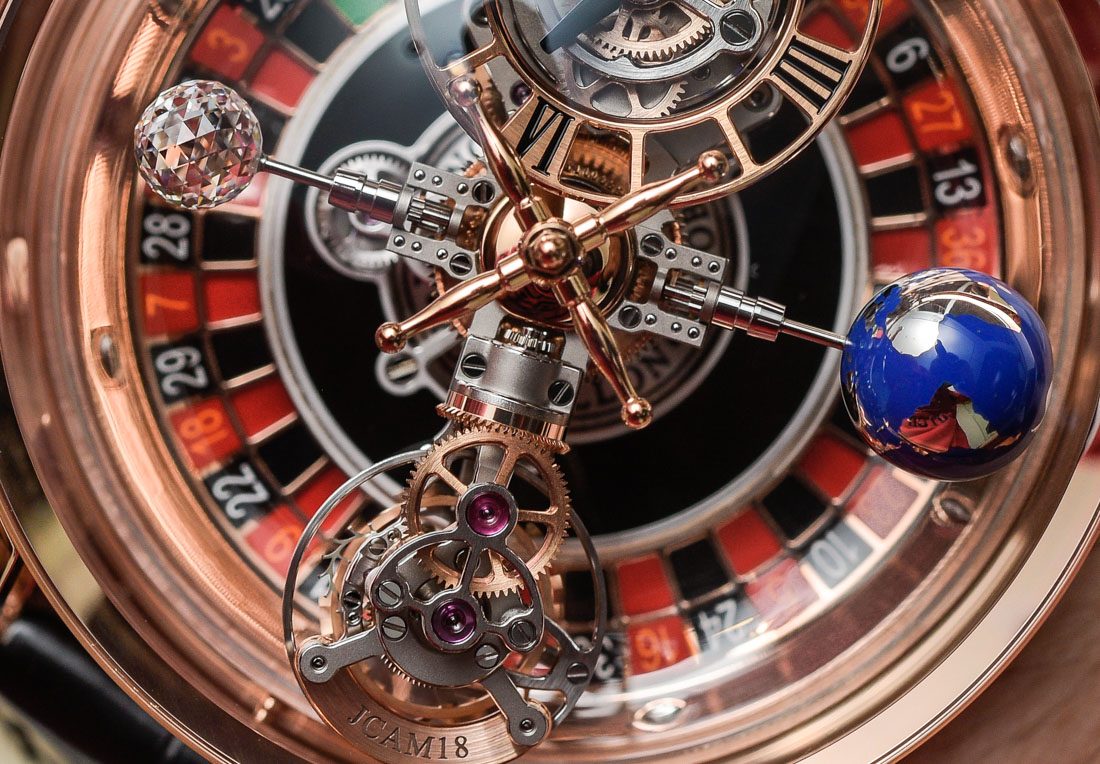 The centerpiece of this very Astronomia is, of course, its roulette complication. At the press of the button at the 8 o’clock position of the case, the roulette wheel is forcefully spun, sending the little white ceramic ball flying. To keep it from entering the movement, the entire roulette wheel feature is set underneath a pane of sapphire crystal. The functioning of this complication feels reassuring at every press of the button, and the overall execution of its every detail is as spectacular as it damn well should be. 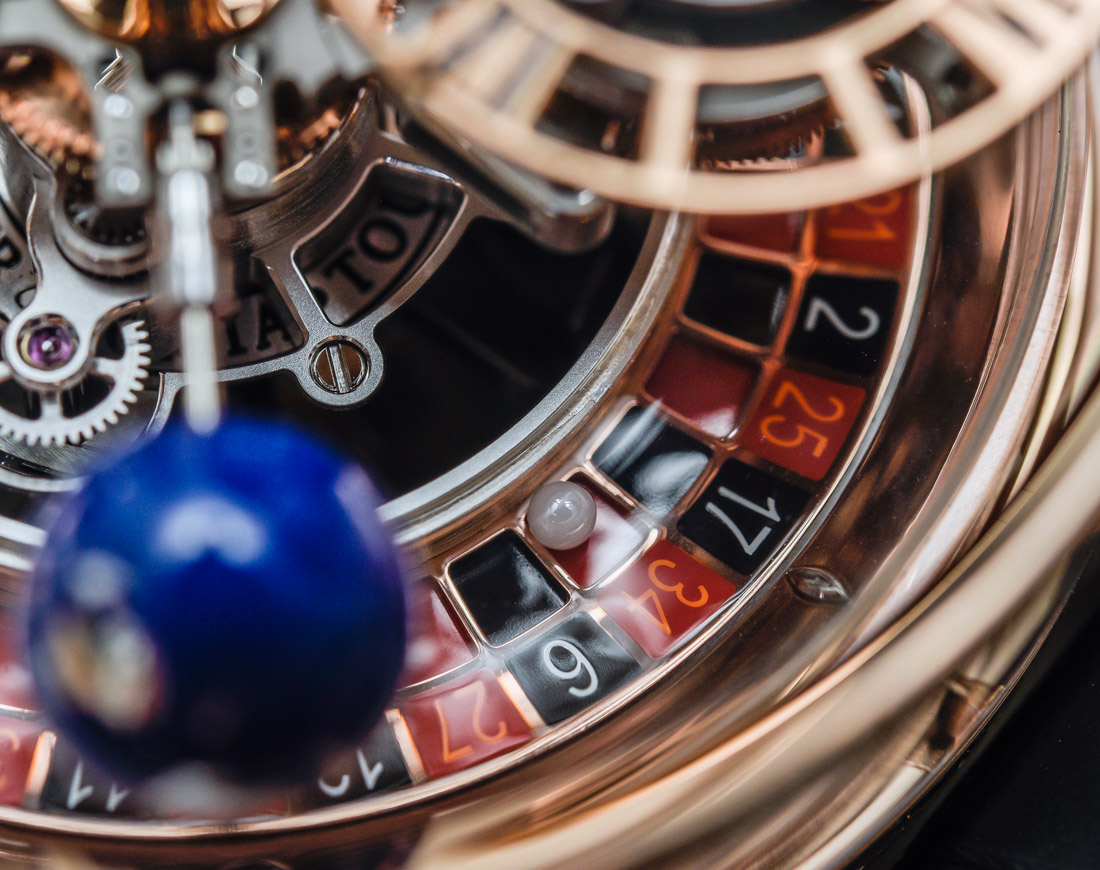 The wheel is crafted from 18k rose gold, with black and red enamel used for its 36+1 pockets. As I said, the thickness is 27.9mm, while the case measures 47mm in diameter. Strangely, because the lugs are so short and are angled steeply downward, the overall wearability is the Astronomia Casino’s other way of playing games with one’s senses. Looking at it directly from above, the overall effect is borderline manageable — even on my narrow wrists, 6.75 inches in diameter. However, once I start tiling the watch away from myself, it begins to reveal its bonkers case structure, topped off with a generously curved front sapphire crystal. Speaking of which, the case band is one single band of sapphire crystal which, when paired with the hollowed out lugs, makes for an easy way of appreciating the Jacob & Co. Astronomia Casino in operation. 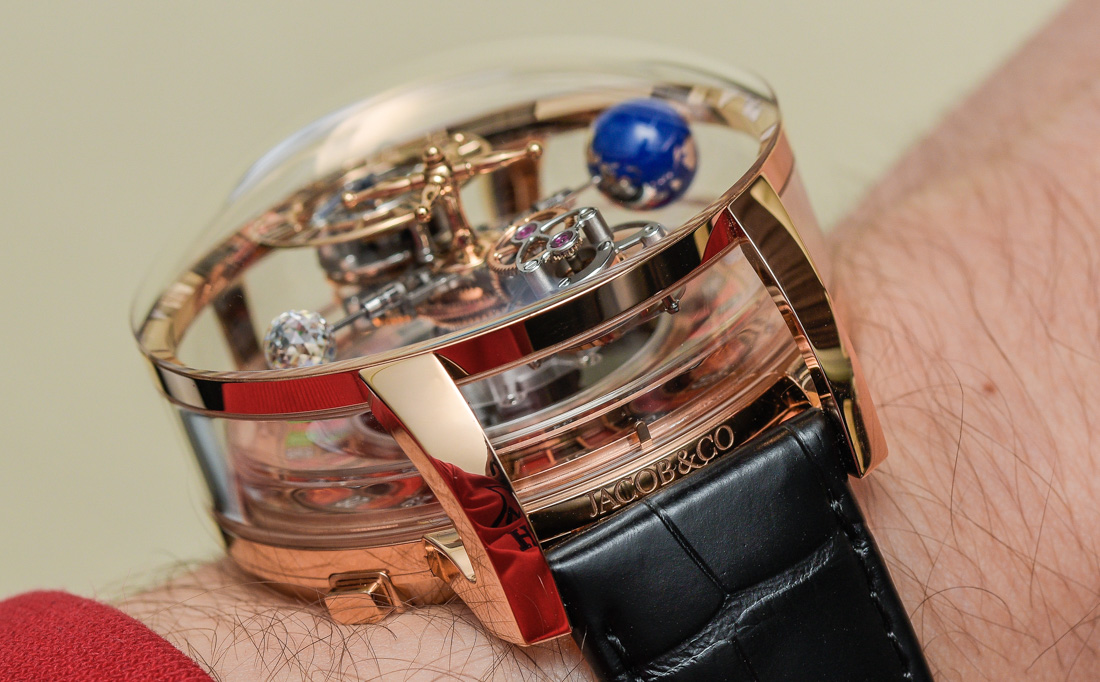 The Jacob & Co Astronomia Casino is priced at $620,000 and is, as seen here, a unique piece. It was certainly a lot more fun to play with than any traditional grand complication, and even if one is not a gambler at heart, the way this movement is constructed will surely appeal to the watch-lover inside. You can find more equally insane Astronomia creations on the Jacob & Co. website.